All depends on how and who does the programing. OHH, and the quality of the unit!!

And for everyone who still thinks they do not need a VSS with their fuel injection, the VSS works with the 02 sensor to control richness/leanness, the 02 sensor by itself won't get this done.

Having the timing retarded will even make cast iron manifolds glow red. Is your centrifugal advance sticking?

I talked to the guy at Affordable Fuel Injection, He thinks the popping is caused by it running lean momentarily due to the fact it happens a lot when the tank is low and when I am coming down a hill. IE I17 from Black Canyon City to Phoenix. I am going to re-do my fuel lines from the tank to the EFI and move the pump closer to the EFI unit. Shorten and clean it up. Also he suggested on of the big 3" Ford Motorcraft fuel filters. It will take more to drain that big thing.

The headers glowing are the 2 next to each other not the end ones and I had the motor running at 3K in the garage, so no airflow other then the fan. I am going to re-do the fuel line and do a road test. The see of the headers are still glowing. The tube they used on them is very thin wall.

Only thing I know about the header is that it was installed by TLC/Icon in Chatsworth. The receipt says SLC106 and the part and oil lines were $324

Other then the popping at highway speed and the red headers which may be my fault running it n the garage, the engine runs beautiful.

I learned the hard way that the fuel supply to my AFI TBI setup was sucking air through my crappy 6-port 'second gas tank' switching valve. I learned this by using a clear plastic fuel filter that showed huge air entrainment when the truck was running.

I then ditched the 6 port valve and cleaned up my fuel supply lines (running the truck directly and only from the factory tank) and that fixed my performance problem. So, using a clear fuel filter can be a useful diagnostic tool.

Just as a 'FWIW' - I found that changing the ignition timing from 0 and trying to change the curb idle (to slow it down a bit) resulted in big running problems with my AFI TBI. So, I carefully returned all settings to stock (the settings the AFI setup came with), and it runs great.

I agree with @Pin_Head , glowing headers, at 3000 rpm with no air flow should not make them glow. Retarded timing would make them glow. Since it's only 2 cylinders glowing I think it's more isolated to a deeper problem concerning those 2 cylinders. Just my opinion. I hope after you change your fuel lines that helps.

fjl40 said:
I agree with @Pin_Head , glowing headers, at 3000 rpm with no air flow should not make them glow. Retarded timing would make them glow. Since it's only 2 cylinders glowing I think it's more isolated to a deeper problem concerning those 2 cylinders. Just my opinion. I hope after you change your fuel lines that helps.
Click to expand...

I can re-check but I think it is both double tubes that are next to each other and just not the outer 2 single ones. I'm not going to take it out on any long runs or probably at all until I figure this all out. I also need to get an inline fuel pressure gauge and see what that is running at.

I talked to a semi truck driver who said their exhaust manifolds would always get red hot on long 8 hour hauls at freeway speeds.

Possibly, the 2 double tubes, close together, radiate heat at each other, driving their combined temperature upwards. The outboard single tubes aren't subject to that problem.

I have the fitting from Specter Off Road on my new factory gas tank. It is only a 1/4" tube. I wonder if this is allowing enough gas out of the tank to begin with? The rest of my fuel lines are 5/16". 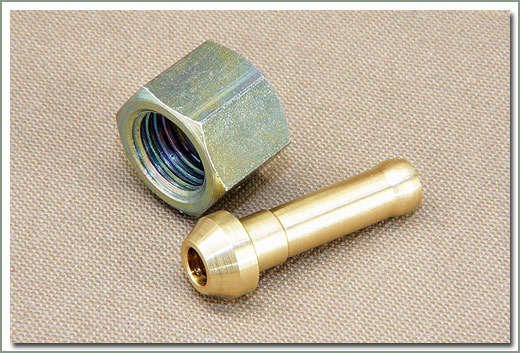 You can get a fitting like that in 5/16" and open your nut a touch to fit. I did that on mine and works fine with no leaks or problem.
JP

Do you know where I can get one in 5/16" I think that would be perfect! Thanks!