My FJ40, 1975, had in it the 1.5F motor. It ran well when I first got it, but always had oil pressure issues.
I replaced the bearings (crank in place) and put in a new oil pump and that helped a lot.
But I was getting a lot of blowby, and on long downhills (off road) there was so much smoke that I always had to go last

So I figured it was time to do a rebuild.

Rather than pull my motor and have the truck off the road, I found a dead 2F going cheap, and started to do that one up.
(this is NZ - all our motors have flat top pistons)

I had read a lot about oiling mods (mostly Mark Whatley's ideas) but could not do what he suggested because it needed a lot of parts from an 'old' F and I couldn't find one anywhere. So I went back to first principles and looked at what might be the issues.

I also shimmed the releif valve at the pump.

The head was shaved and the block skimmed. Using the 1.5F head helped increas compression, but I was working hard to get up from std of 7.5:1.
Squish was set to maximum (this is the gap between piston and head) - normally the pistons finish flush with the block - on mine they proture above it, to fill the space made by the thickness of the head gasket...

I ended up with 10.5:1 compression, and this was after slightly enlarging the combustion chambers to allow better breathing.

This may be why the old motor had so much blow-by - top ring on every piston was broken... 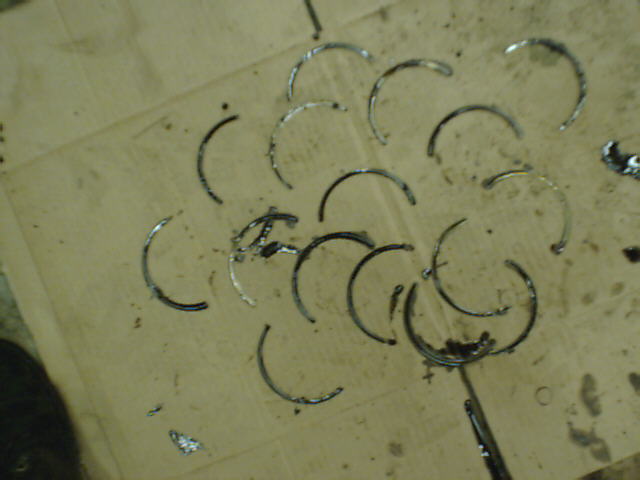 And on number 5 3 were broken, and the other ring seized in the groove! 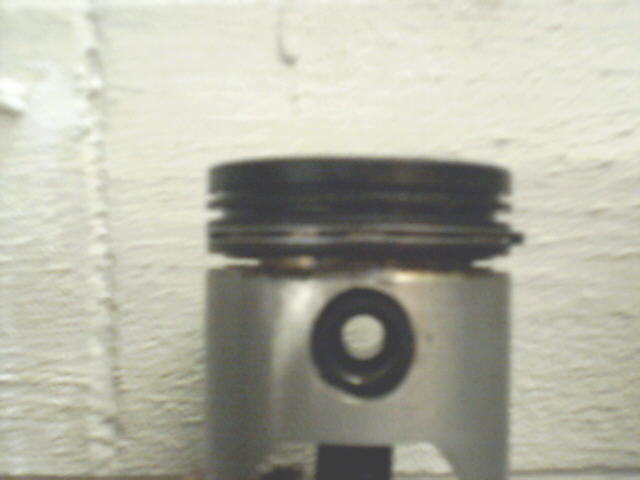 My shortblock has just arrived 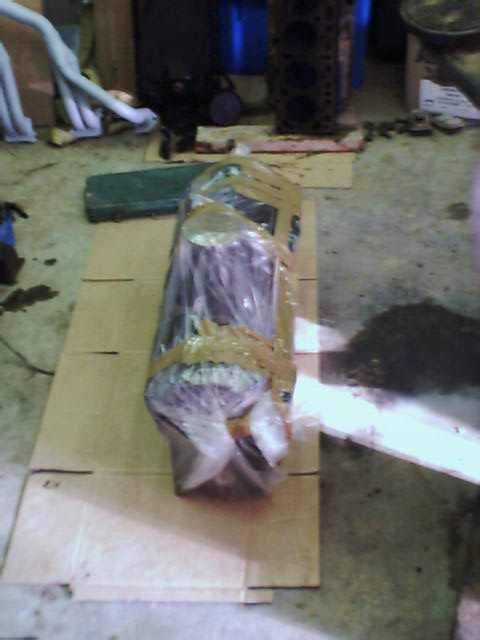 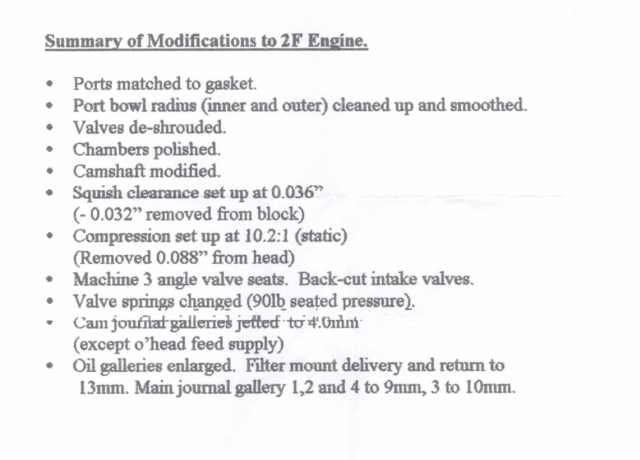 The pistons are set above the level of the block for maximum compression and most efficient combustion... 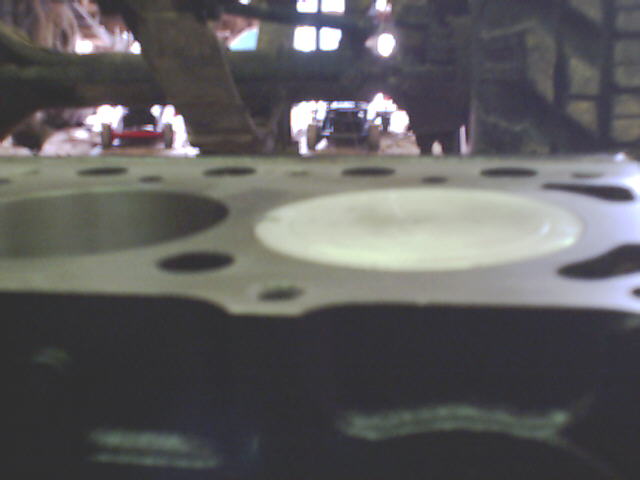 It's always the little things that cause problems - the total shave (block + head) was such that I couldn't reinstall the head - discovered the dowel rings were now too tall, so had to shave them 1mm - old left, shaved right. Then the head fit OK... 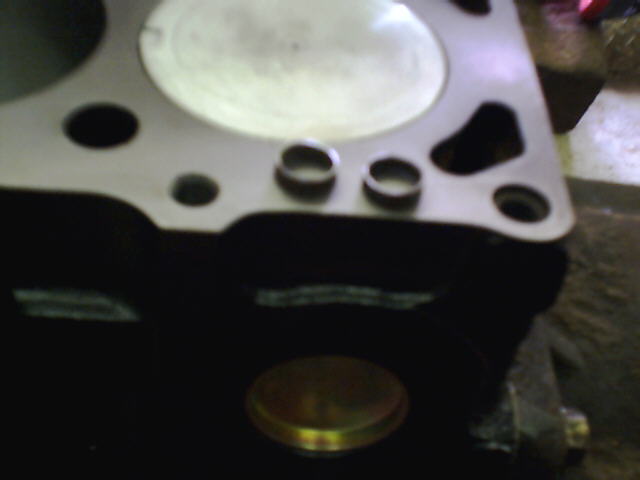 Reshaped and polished chambers. There was also work done behind the valves. 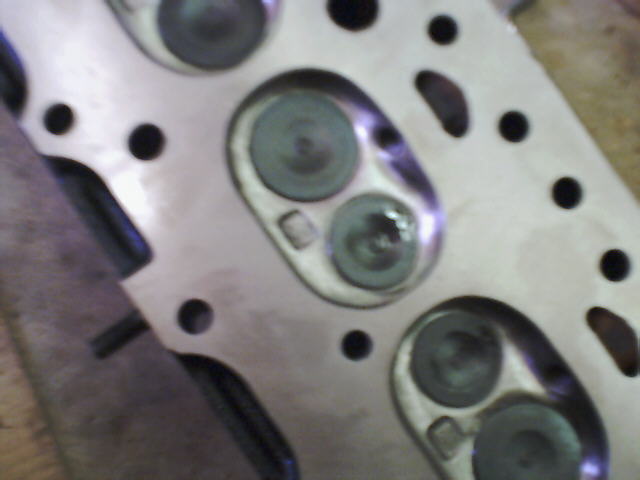 I had it all balanced - and I'm very pleased I did - obviously the PO had done some work on it at some stage - one conrod was from a different year and was 30grams heavier than the rest - at that point I decided to reuse the rods from my F - they were all the same. And I took a pic so you could see all the shiny bits where metal was ground off to balance it 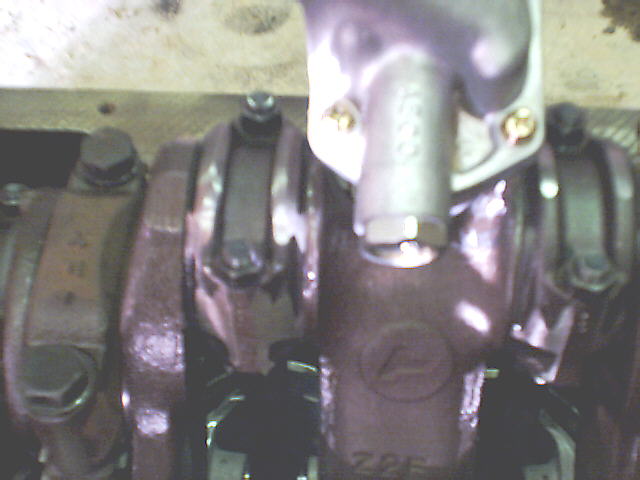 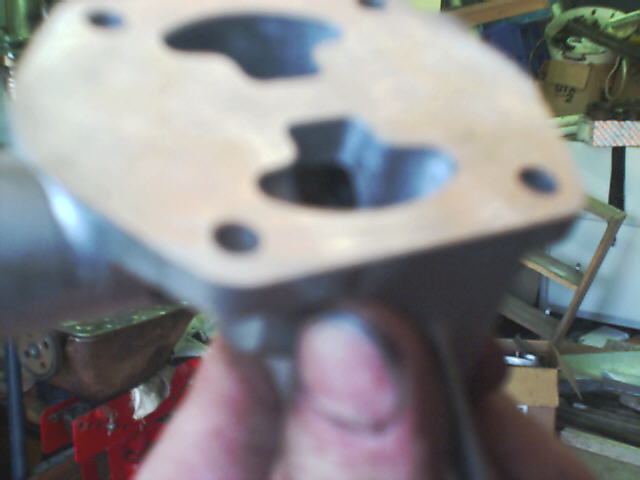 and this is after... all holes radiused and polished... 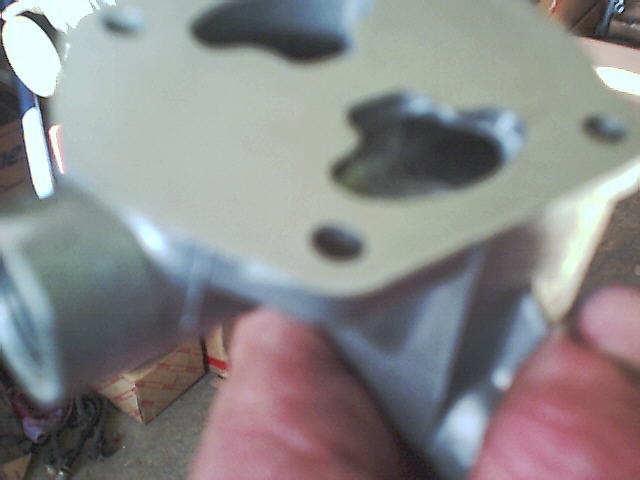 The final oil pump assembly. All fittings and elbows have been ported out to 13mm to match the feed galleries 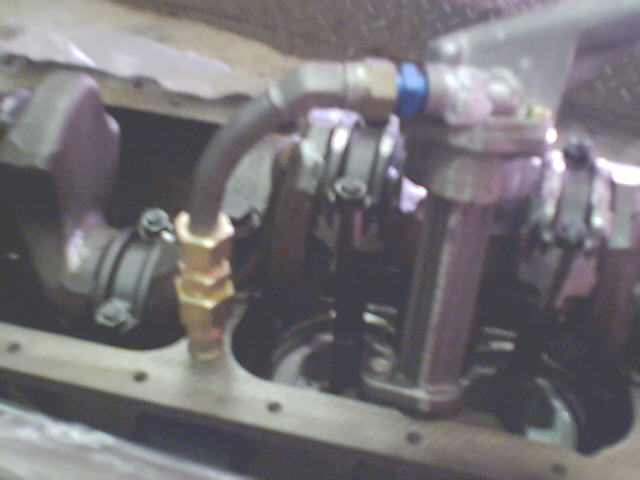 The only problem was the sump wouldnt fit over the new feed pipe, so I started to beat it out to fit.
But I beat it too thin and got a hole, so I brazed a patch over.

The pesky hole that appeared in the sump 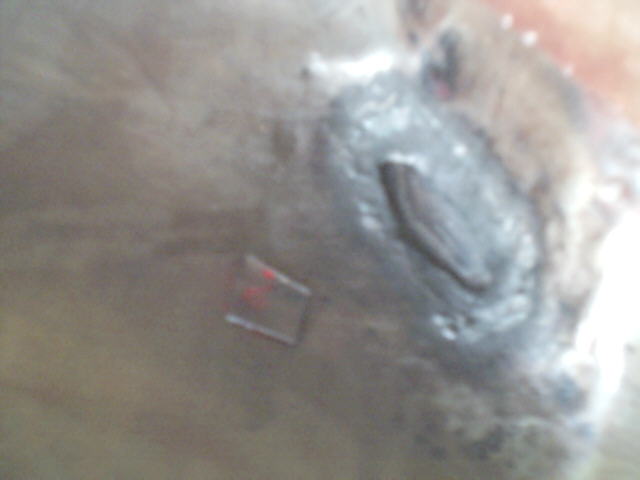 Having no confidence in my welds being oil tight, I flowed solder over the 'hole' area - two years now and no leaks... 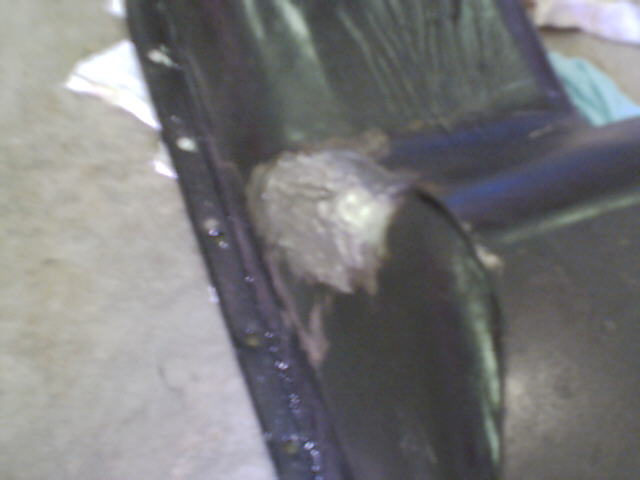 My F had a gasket with separate inlet ports on it - I wanted another like it. I assumed it was aftermarket, but after hunting high and low, I discovered it is the OEM gasket for an F. But I had to ask for it specifically - the default Toyota gave me was a supercession to the 2F gasket... 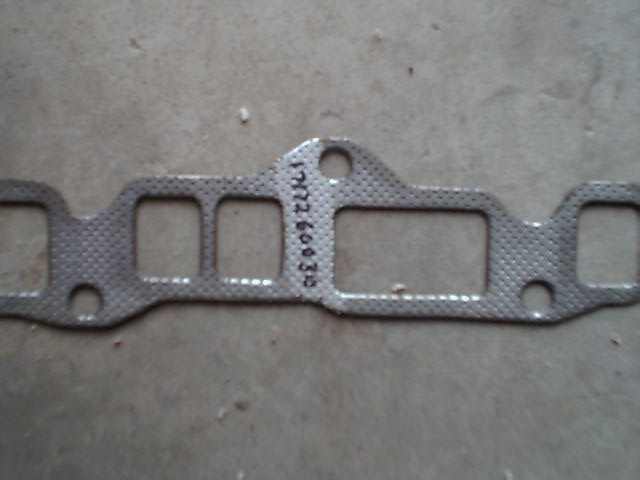 The famous 'hi-performance' inlet manifold - certainly a much better runner design than the later manifold, but it has it's own share or problems (see below) 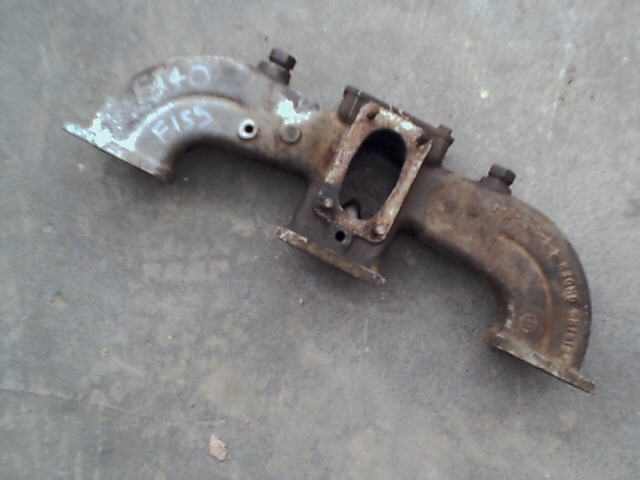 The runners, although a better design, sit m7uch closer to the head than the later inlet manifolds. I found it would not fit over my headers, so...

The cursed 'hi-performance' inlet manifold again, after grinding and grinding to get it to fit over the headers.
Never again!!!! 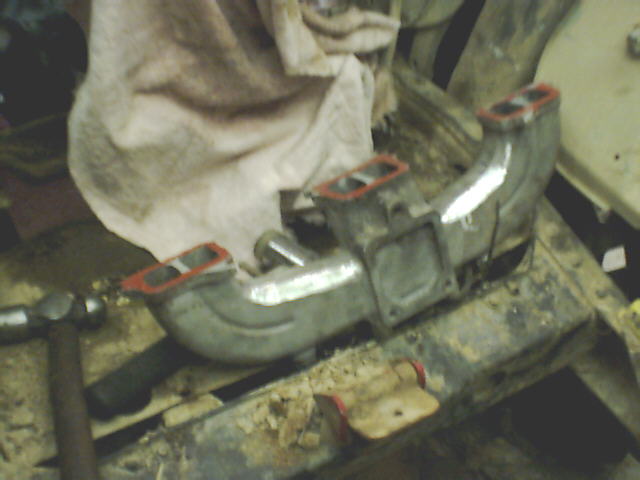 Having finally managed to get that cursed 'hi-performance' inlet manifold to fit over my headers, when I went to bolt it all up I discovered the ears on the inlet were 1mm thinner than the old on, so I had to get the headers milled to suit to get the inlet to seal.
You can also see where I had to clearance the pipes where they go under the inlet. 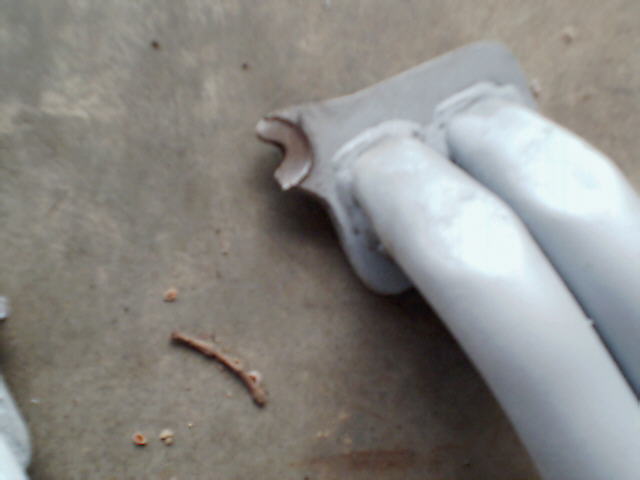 Custom clutch - you can see how much more 'clamp' it has by how much further up the 'fingers' are.
The clutch plate has been bonded as well as rivited - helps prevent the lining from shredding 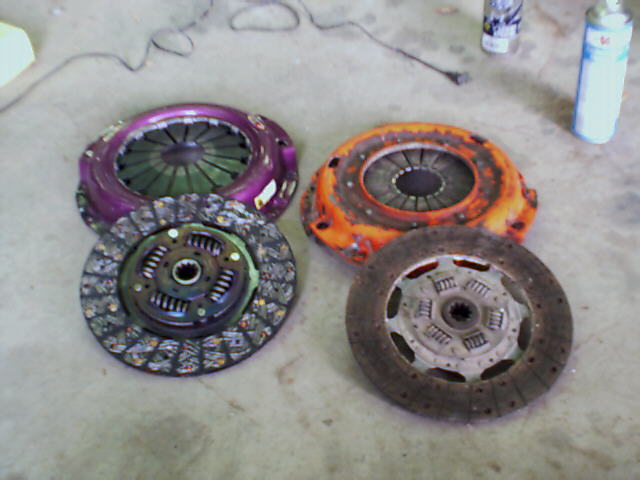 And here it is - a nice shiny short block, with sump - let the assembly continue... 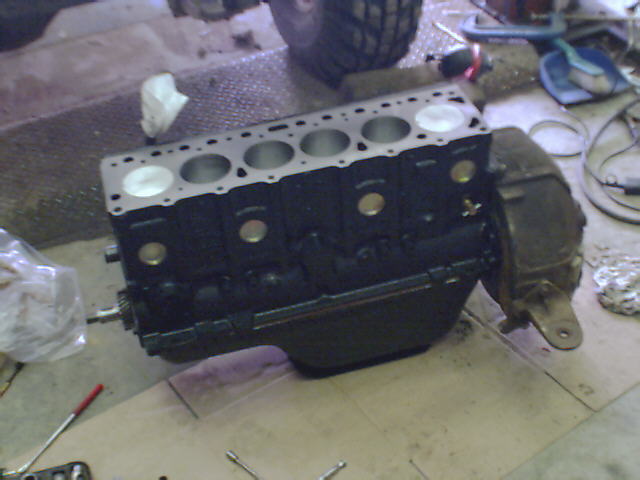 Getting there - the heads now on... 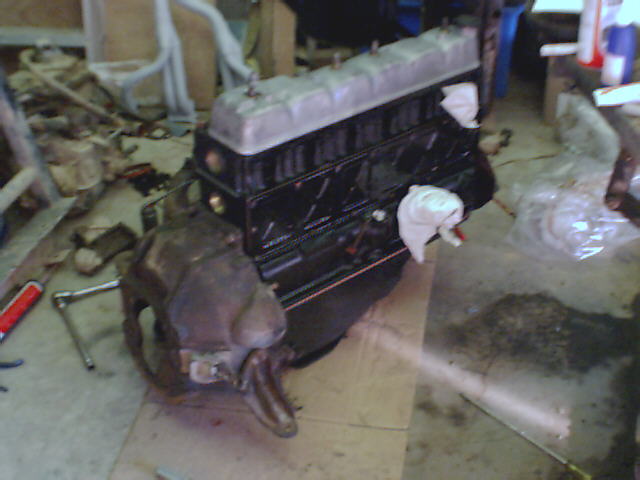 Note the frost plug near the air cleaner - there's a story to come about that... 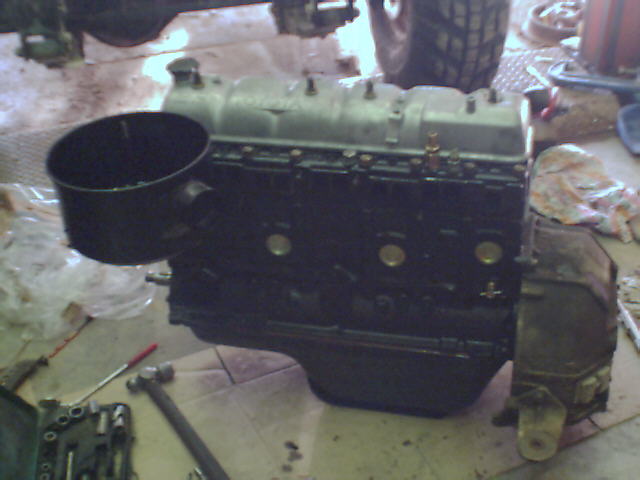 I was told it was easier to install with the g/box, t/case attached 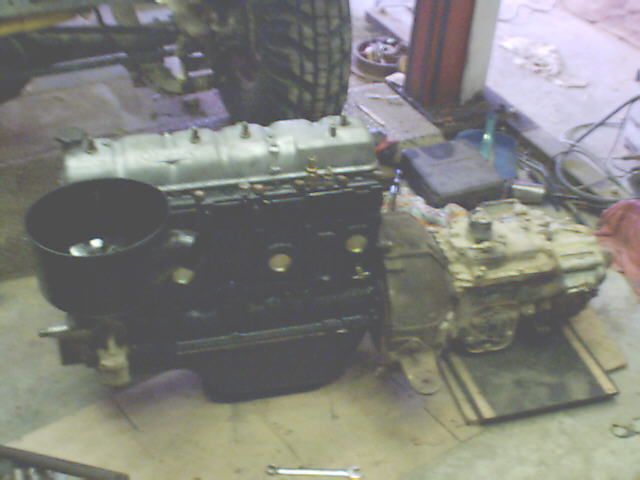 Lifting into place... (I wish I'd put the gearbox on later - it was not nearly as simple as I'd been told!) 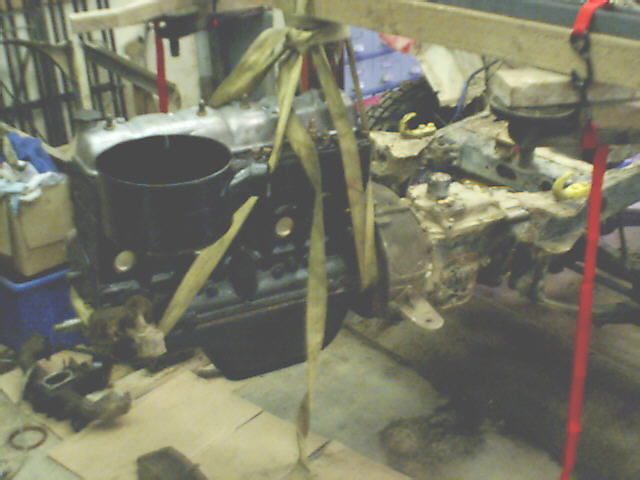 Motor in place, just needs a few final bits and I can start it... 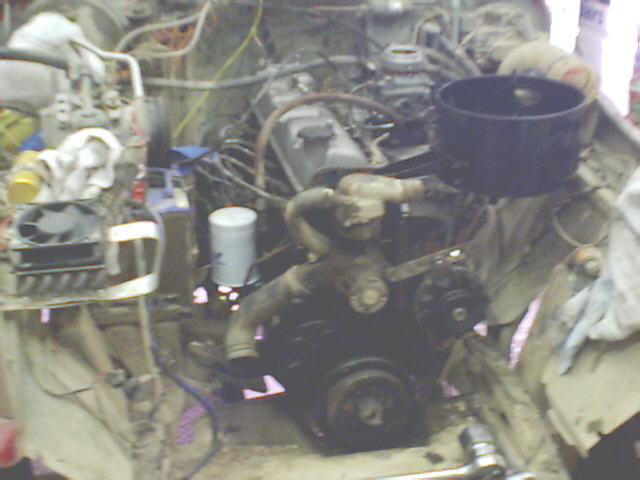 The motor was brilliant - though I got a bit of a shock fairly early. On the way home from moy 'running in' trip, my son said "What's that smell" - at whcih point I immediately switched off and coasted to a stop - antifreeze smells should not be happening! It turned out the above mentioned frost plug had fallen out, resulting in an immediate and total loss of coolant. fortunately once I put a new one in, it appeared no damage had been done.

The next shock was on the first hard trip. I put a memory tach on so I'd know how high it was revving (never have time to watch while driving it off road) and discovered it was pulling 7300rpm. At whci point I put a rev limiter on it - don't feel comfortable running that high - it now limits at 6500rpm. It is useful to know it will survive revs that high - it was a good 3 minute run up a hill and nothing broke


I've since fitted an HEI. I mounted a breather on it - I still need to put a port into the cap to run to vacuum to prevent condensation... 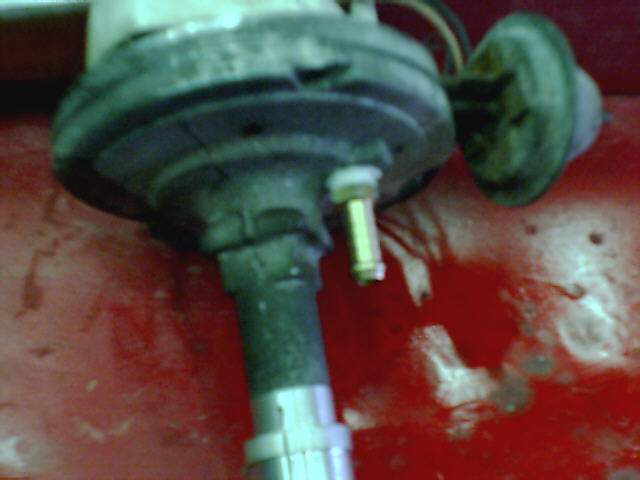 I had to pull the head recently as the compression had dropped - seems I was running the LPG too rich and had worn out the rings - so re-ringed it.

Took the opportunity to modify the block. The pic is not the best, but basically the mod involves grinding away to provide a chamfer from the line of the head gasket, down to just above the top ring. This gives better airflow around the valves and into the bore. To be honest I haven't noticed a huge difference, but it was done at the same time as a re-ring and cam change so that's not to say it hasn't made an improvement. The theory was good... 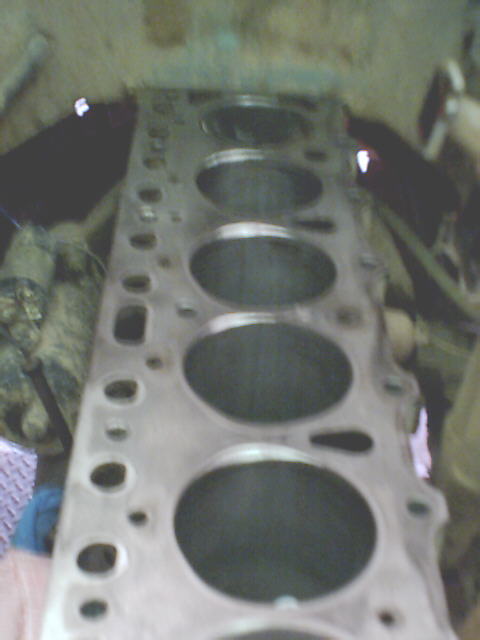 After putting it together I ran it for 20 mins to bed in the cam and fo9llowers, then went for a drive.
The next day I started it up and it was missing and rattling terribly. 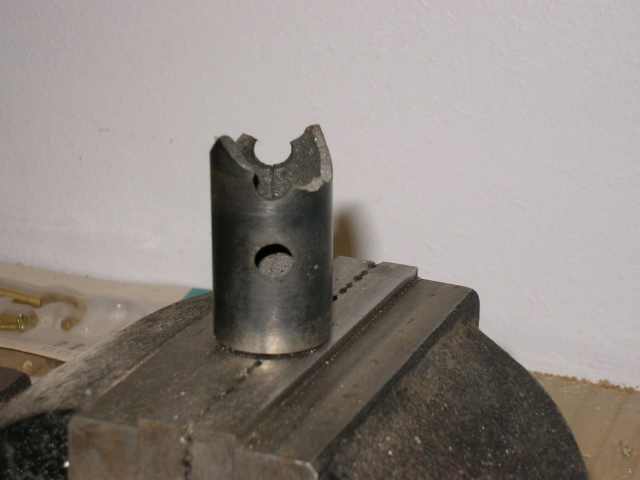 I remember dropping one of the followers when I was putting them in - moral of story - dont drop them, if you do, crack test them.
I must pull the sump sometime and extract the other half of it

Gret job!! you are my new Idol. I have to still build my engine, its laying around my garage. I ordered new lifter today though

I'd set that limiter below 6500...it's not the oiling that will kill it at that point, it's the long stroke.

Personally, I'd set my limiter at 4700 to be on the safe side (I've pulled higher than that, but try not to).

how did you "jet down" the cam oil galleys?

just a note . If anybody else uses a head from an f engine on a 2f other than late 74 or early 75 f series , the external oiling to the head needs to addressed . I did this mod and was told the head was from a 74 internal oiling but it wasn't drove about 2500 km before I realised the head wasn't getting oil wasn't reaching the head .Cost me a valve train .(rods,rocker shaft .rockers etc. )I'd love to hear a 2f rev to 7300. must sound disturbing.

I think he had a link to a vid. Crazy.
Can somebody post it up again???

Actually the '73 head usually has the internal oiling passages too. Some of the early '72 and even late '72 have the bosses cast, but they are not drilled. Check carefully.

Andrew, when you re-ringed the motor, did you check the torque on the rod nuts as you removed them? I'm curious abut rod bolt stretch.

Notice from the pictures, Andrew's head is a closed chamber. Meant for flat top pistons. In the US (and I *think* in Canada too) the late vintage F and the early vintge 2F used small domes and an open chamber head.

The idea of 7300 rpm still scares me, but I'll happily turn my motors (built, not wornout stock original) to 5500. I have a buddy who is running one of "my" motors that I helped him build to and beyond 6000 fairly often. The next 2F I build for myself will probably have redline set at 6500

Once reworked, the 2F pulls very stongly in this rpm range

Mark W said:
The idea of 7300 rpm still scares me, but I'll happily turn my motors (built, not wornout stock original) to 5500. I have a buddy who is running one of "my" motors that I helped him build to and beyond 6000 fairly often. The next 2F I build for myself will probably have redline set at 6500

Once reworked, the 2F pulls very stongly in this rpm range
Click to expand...

Yes it pulls very strongly, but mine sounds like its going to explode...
But it's very smooth.

Degnol said:
I think he had a link to a vid. Crazy.
Can somebody post it up again???
Click to expand...

Mace said:
how did you "jet down" the cam oil galleys?
Click to expand...


Grub screws (loctited) with holes drilled in them.

Mark W said:
Andrew, when you re-ringed the motor, did you check the torque on the rod nuts as you removed them? I'm curious abut rod bolt stretch.


No. (didnt think of that).
But I'd have got a false reading anyway, they're loctited in.
(I took on board your comments about them stretching then working out, so I figured with loctite, even if they stretched at least it would hold together!)

I did check all the bearings and there was no sign of hammering, and essentially no wear
Which was surprising because it had 10 mins of reving (up to 5000)when I put in my HEI and didn't realise it hadn't engaged the oilpump. Thank goodness for good oil

bustanutley said:
No valve float 7300? that is crazy
Click to expand...


90lb springs
You must log in or register to reply here.

Searching for engine and transmission