Gas in oil and oil in cylinders (1 Viewer)

I have searched for this and found lots of information on this site about gas in oil (leaking fuel pump) but not much on both together.

So I have a 67 FJ40 with F engine just finished frame off restoration (first one, and never really finished) just started test driving it on the road. It is mostly original and only had 30k miles. We rebuilt the carb and replaced the filters but otherwise did not do anything to the engine. Seemed to start and run fine, 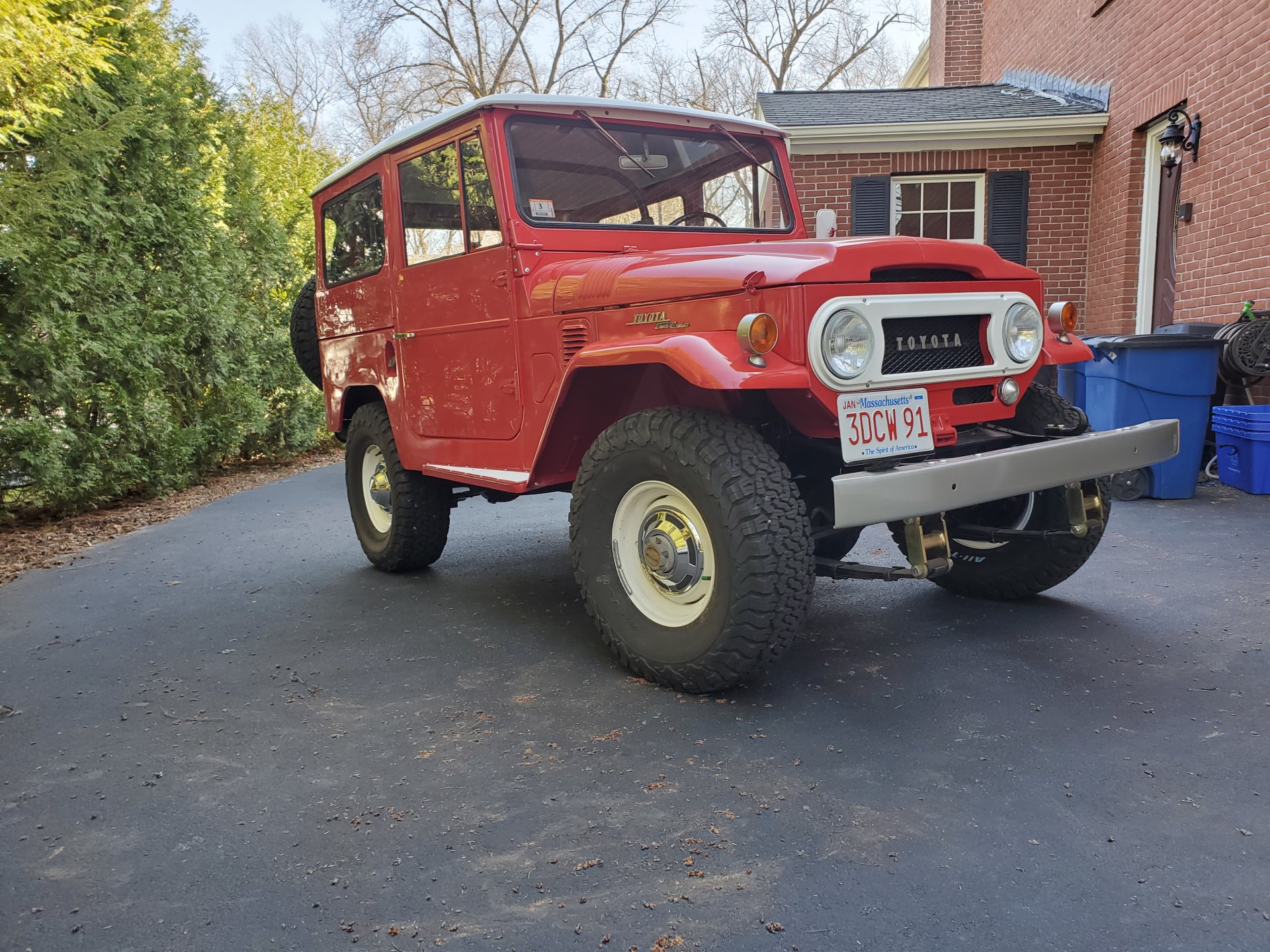 Once on the road it would stall after getting warm, even just while shifting. Vacuum was steady at 18. I tried to adjust the idle mixture and it gave max vacuum when almost closed. It still has the exhaust manifold heat valve that seemed stuck and in the middle so I moved it to the warm position. Next trip it was stalling worse, running a little rough and when starting it would produce huge white clouds. before getting home it got to the point where it would barely start and not keep running making massive clouds. We were looking at the engine and saw oil leaking low on the drivers side. So we towed it home. It seemed the oil was leaking out from the shaft of heat valve on the exhaust manifold (not a good sign I assumed)

After research here on Ih8mud I was thinking head gasket or other so checked the dip stick and found the level high and smelling of gas, no foamy cream appearance. Dripped some of it o a piece of wood and it lite easily with a lighter. Checked the plugs and they looked like this, 4 with oil and 2 black but dry. Compression was 125-140 on all. 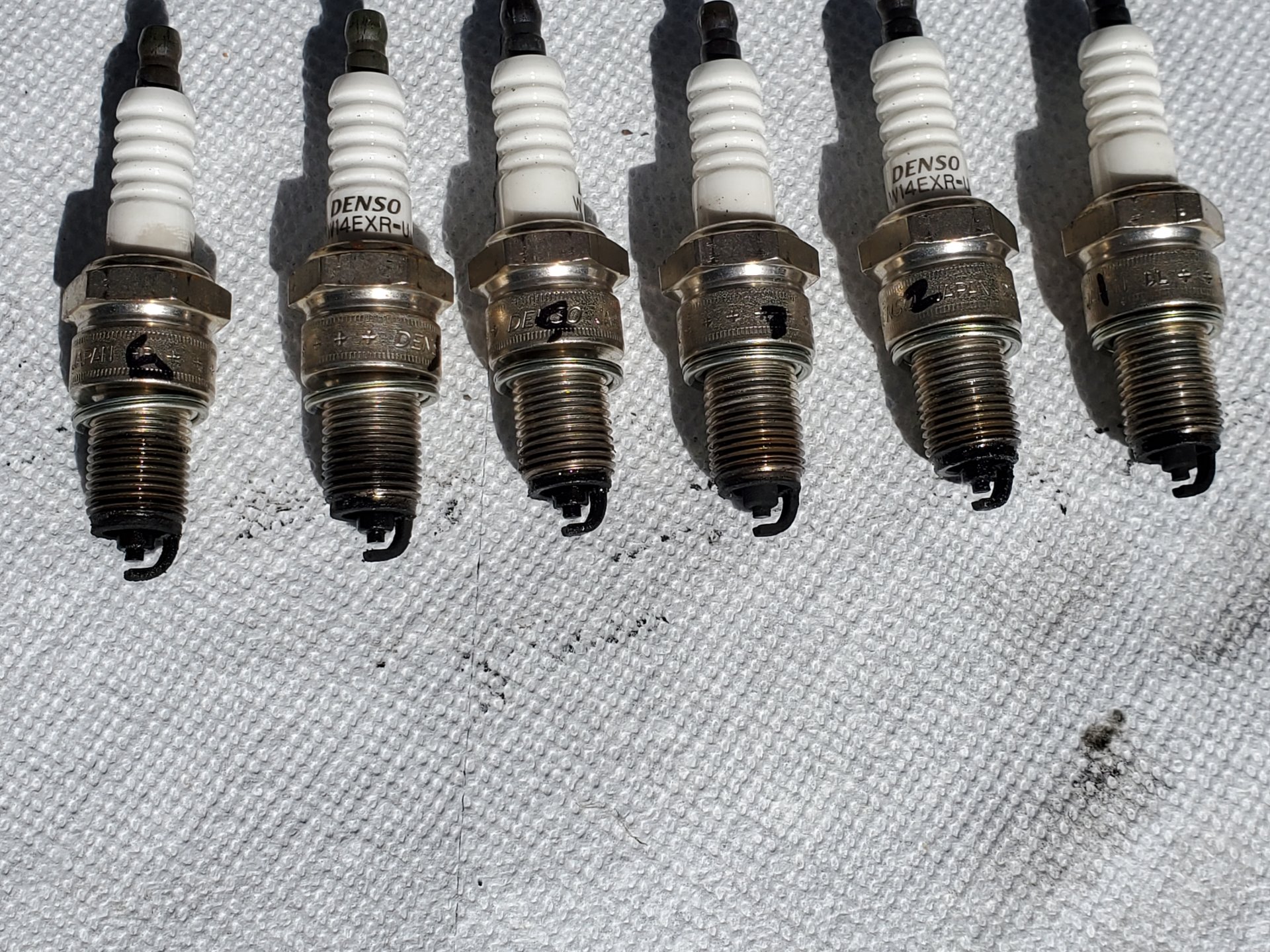 The checked the tail pipe and there was thin black oil at the end. Gas in the oil and oil in the cylinder. As Poser often states its the fuel pump leaking into the block. I'm going to re build that, but what about the oil? Could it be that its leaking into some of the cylinders since the gas thinned the oil and its coming in at the valve seals, or are the valve seals shot, or could it still be the head gasket......... This truck only had 30K but since 1979 it had not left the PO's small yard, and was rarely driven. I would really appreciate any help from you experts. Thanks

What does the tube from the PCV valve look like on the intake manifold side?

Probably just valve stem seals. Probably needs a new fuel pump, even if it is not leaking. Time will be the enemy of anything that is not metal.
D

Tube from PVC on oil filler tube to base of carb was replaced.

You need to solve one problem at a time. Replace the fuel pump and change the oil. Drive it some and see how the smoking situation is and if the oil is diluted. What color was the big cloud of smoke? It sounds like you may have a mixture problem or carb issues, along with other things.

Does it blow out a blue cloud when you shift gears? A rarely-driven truck of that age is almost sure to have bad valve stem seals. If the valve stem seals are original, they would be highly suspect and result in blue-on-shifts.

The clouds were white I think but the final demise was at night, so hard to tell. Last night I drained oil, OMG once I got the plug out is came out like water out of garden hose and splashed everywhere. You should have seen me trying to get the plug back in as my extra large drain pan filled to the top. If anyone has this situation wear goggles and a face shield. no water separated when it was left in a glass jar, but the viscosity was more like gas than oil, and stunk. I quickly turned off my garage heater. Pulled the fuel pump and cant tell if its leaking, tried manually to put gas in and hand pump it......any idea how to tell if its that, I assume once I pry it open its trash since you cant get rebuild kits. Or should I just replace the pump and the valve seals. I assume that the oil should be replaced just after I run it again due to the fuel soaked oil still sitting in the engine?

Fuel pump is a good start. Another spot to look is the carb inlet valve. If it is stuck open, fuel will fill the carb then flow into the intake, fill the cylinders, leak past the rings and fill the crankcase. Does your carb have a sight glass? If so, where’s the fuel level?

Sounds like you’re not idling on the idle circuit if the mixture screw didn’t do anything until almost fully closed. It’s likely running rich due to an overflowing float bowl or stuck choke. There’s also a good possibility that something else is not right and you’ve had to increase your idle speed to compensate for and that’s why your idle mixture screw isn’t doing anything.
D

Thanks for the help. Recently I have been checking the sight glass and it has been at the midway line, I did not check it when it totally crapped out. A while ago when we were just starting the engine but prior to driving it it was overflowing with the sight glass full but seem to correct after moving the float some. I did do a rebuild before we started it up for the first time since the restoration. Since the fist episodes of it sticking way back the level has always been at the line. I'm at the point where I wonder if I should replace the original fuel pump, valve seals and carb??????

Could just be something stuck in the fuel inlet valve. Not saying it’s definitively the carb, just an option. Fuel in the oil is either carb or fuel pump related. Fuel pump is easy to take apart and have a look.

I had an overflowing bowl. I was changing float height, but didn't also correct float drop. Mud chimed in and explained that it couldn't happen like that. However, there has to be a reason for float drop being called out in the manual, and I haven't seen it happen again. I didn't use a SST, but just something more like a drill, or a match from a book, as in the YouTube video.
D

I appreciate all the input, I have installed a new OEM fuel pump and waiting to sort out the valve seal issue (another thread) before test driving it. But interestingly the F engine I have only has O-rings above the keepers for seals and 5/12 0-rings were missing (not sure where they went?), and the missing ones correlate to the cylinders with the oil soaked plugs. I am waiting for some new Viton ones to show up.
You must log in or register to reply here.

B
Gas Can Carrier