I recently noticed a 1997 Landcruiser with the front drive shaft out of phase. The marks were lined up but the shaft was not phased. I've always heard that drive shafts are supposed to be phased. Thought someone had put it back together wrong but found the same thing on my '96. Toyota says that they cannot explain it but that they all came that way. So first a quick survey to see if anyone has a properly phased front drive shaft and second why do they come this way? What is the logic behind it? Something with the viscous coupling system? Thannks ??? ???

On full time 4WD models the rear shaft is in phase (yokes aligned) while
the front is 90 degrees out of phase.

Universal joints by their nature are NOT constant velocity joints when
working through an angle. A smooth/constant rotational force is
converted to a jerky 4 movement affair. The greater the angle, the
greater the jerking. Try driving a 4WD with uni joint steering knuckles
and you will feel this through the steering.

The idea of having unis on either end of a shaft "in phase" is to allow
them to "cancel" each other. This of course necessitates that they be
working through roughly (actually closely) the same angle.
The 80s front unis being out of phase contradicts this practice. I don't
know why they are out of phase, and have not asked Mr Toyoda.
Anybody out there know him intimately enough to ask such a question?

Correct assembly will see all grease nipples on either shaft roughly in
line (if assemblies are as from Toyota).


FWIW, if Norm doesn't know then everyone else is probably guessing.

Location
Below the Mackinac bridge

90-degree out of phase U-joint pairs cancel each other when the input and output shafts are parallel, or at equal angles in the same plane. The rear axle pivots on a parallelogram of arms, basically straight up and down. That keeps the rear of the rear shaft parallel with the front.

The front diff pivots from a single hinge point, just forward of the rear knuckle on the front shaft, so the forward knuckle angle doesn't change much with suspension movement. It looks like the front knuckle angles slightly sideways. Stock and empty, the rear joint looks like it angles about the same amount slightly down. Equal angles, in planes 90-degrees from each other, so the U-joints should be mounted 90-degrees from normal to be out of phase. Vibration is more of an issue at speed, so Toyota probably didn't worry about canceling rotation when the suspension is flexed.

With a big lift I'd expect some vibrations. If you could rotate the front diff so the two end angles are about the same for high-speed driving, it would help. You'd just have to put the yokes on the splines so they match the planes of those similar angles, out of phase. Simple ??? There's a big, adjustable protractor that just came out for woodworking, in the Grizzly catalog. Pretty cheap, and it should work for measuring angles like this.
╭∩╮（︶︿︶）╭∩╮​
I could agree with you, but then we'd both be wrong.
'97-80, '97-80, '03-4R, '03-100, '21-200...
C

When I put my lift on I removed the shaft and set it a side with out looking at it. Several days later, after I installed the lift and sway bar blocks I reinstalled the shaft. I noticed it was out of phase as I was bolting it on. I just figured someone at the shop was playing a joke on me. So I put it in phase and installed it. Later I found out that Toyota shipped the front shafts out of phase. I don't know why but I have tried it both ways with a 3" spring lift and don't notice any difference on this application.

The factory shop manual also specifies that the front shaft be OUT of phase, while the rear shaft is IN phase.

Location
Below the Mackinac bridge

Can anyone confirm that the 90 degrees misalignment of front DS is specific for later 80 series models and not for earlier? I have looked in the FSM from Jan 1990 and I cannot see anywhere it is specified that front DS should be out of phase. The illustrations in the propeller shaft chapter illustrate shaft as being aligned. But sometimes these illustrations are not the best. And it could different from a 1990 and a 1997 model?

I have a 1997 model which suffers from bad vibrations at 30-40 mph after which it fades out. There was a bit of vibration prior to the 5" lift I have done. Uni's were all replaced, but front DS is still acting up. Currenly front DS is aligned. Of course there is the DC option, but if problem can be curred with a simple 90 degree mis-alignment of the yokes, it would be great.

But it would be awesome of someone could confirm specifically that for a 1997 80-series, front DS yokes should be 90 degrees out of phase?

All input is appreciated

It took longer to search this thread and formulate a question than it would be to pull one end of the front driveshaft and change the phase.
Jon Held
1991 FJ80 "Lumbering White Rhino" sold to a good home

Sure, but before stumpling onto this thread, I spend a lot of time already flipping shafts and not getting anywhere so I thought that someone might have the experience to say go/no go. So I at least knew if I was looking in the right direction. 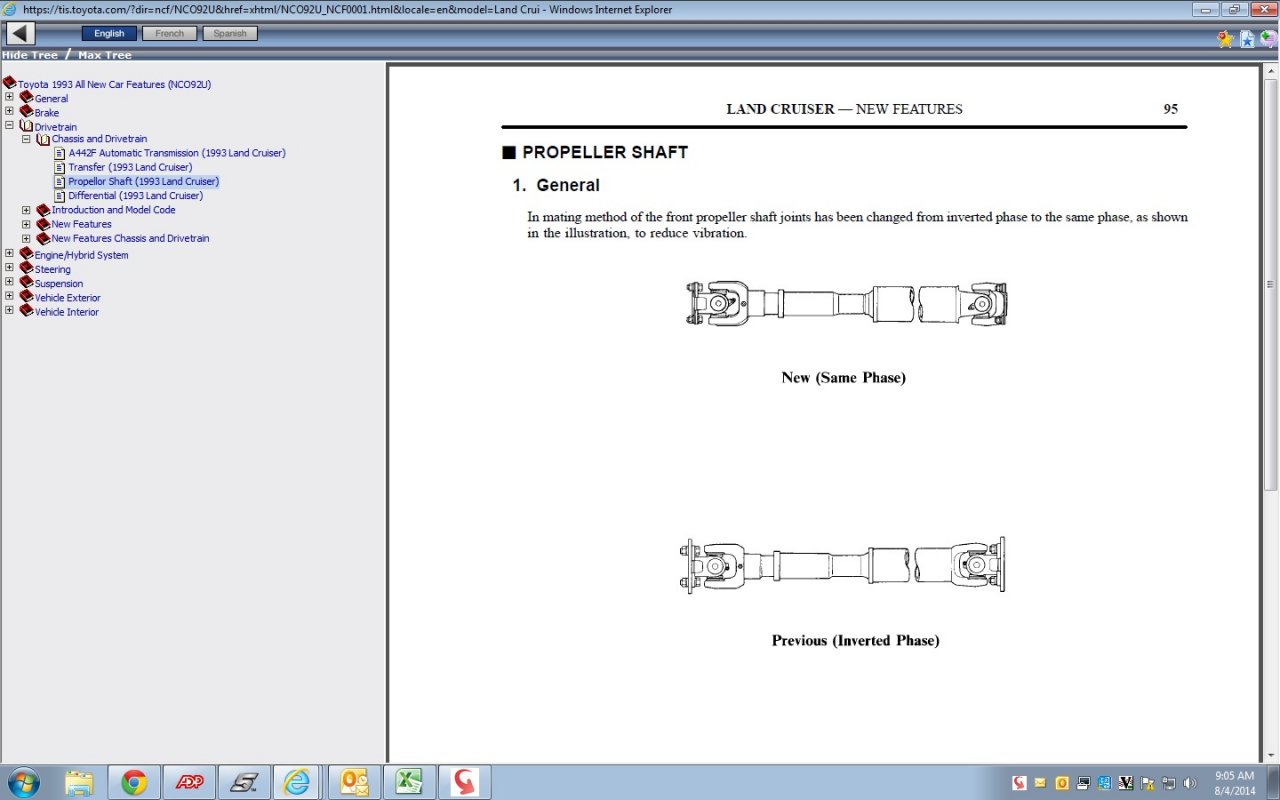 Great stuff Beno, thanks for clearing that up 100%

Also it seems my eyes deceived me - I looked at my dismounted front DS again today and actually it IS "same phase". So my hope that this is the problem blew out the window there. Next to check is a bind that is in one of the spider bearings. All bearings have been replaced but I have a feeling that a bind in a brand new bearing is trouble.
And after that, time to measure drive shaft angles etc.
Again, thanks for the attached documentation...

Those Toyota terms seem off to me. In phase to me is the yoke on each end are aligned the same. I have built my own drive shafts for off-road use for years and they all see a little highway time without issues

This thread caught my eye because when I pulled my shaft a few months ago for the engine swap I thought to myself that this shaft has been misaligned I wonder how long it's been that way. I bought the cruiser to do the swap and only put about 2k on it before pulling the motor.

I'll have to play with it some. Seems that with a google search people try it both ways and can't seem to notice a difference. I would assume any lift may affect the phase vibration more.
96 fzj80 Awd 3-locked 4bt diesel 2.5" King coil-overs, 35's 3.54 gears 1/4 mil miles, custom tube bumpers build: http://forum.ih8mud.com..com/threads/4bt-cummins-96-fzj.782141/

the terminology seem off to me also.
mine(96) is what the diagram would call "new(same phase)"
This is what I have always called "out of phase".

I have not delved into Toyotas reasoning much but I do have a bit of engineering background and my hypothesis is that it was done because the operating angles are not the standard "equal and opposite" at each end. The first joint at the Tcase angles down and instead of the pinion going back up it goes down again hence non standard phasing to cancel.

When lifted the Tcase angle increases disproportionally to the pinion that I believe actual straightens out a bit. Now with the two joints at different operating angles complete cancelation is not possible regardless of phase.
Possibly with castor plates or bushings to get the pinion down and at the rite lift height you could get opposite operating angles and then clocking the shaft 90 would be appropriate but I'm not sure

Disclaimer: This is just my hypothesis and I have not done the math or looked at it in-depth.

A bit of an old thread, I know, but are most folks running either, both, or neither DS in phase (both yolks on same plane)?

With only a 2-3" lift on mine, I have some front DS vibration and the DS's are set to the factory out of phase spec. Trans is out and going back in this week. Thinking of going back together in-phase front and rear. Easy enough to change later, but thought I'd bump this thread to for general concensus.

Beno, I know this is 3 plus years old, but am I to infer then with my ‘91 HDJ, the front yokes should be in line with one another? Or should they be 90 degrees out, as many have suggested?

Ryland
You must log in or register to reply here.

B
Lifted 80 drives like krap,, I'm thinking of going back to stock ride height
2

Is my shaft about to explode

Propeller shaft Discontinued or on back order with no ETA