Been working on getting all the various bits and bobs aligned before welding up my tub to the firewall. The tub is aftermarket (CCOT) and the fenders are also aftermarket (CCOT/Taiwan), so they're not OEM perfect. The only quirk I have left is that the bib is sitting about 1/2" higher than normal from the front frame.

The tub seems to be sitting pretty straight at this point, with all the body mounts and rear bumper alignment looking ok. The firewall to tub looks good, with even door seams and the body seam where they meet looking ok, as well as the windshield fitment looking ok. I do have the thicker body mounts on the firewall outriggers as well (vs the standard sizes used elsewhere). Running boards sit ok, although I don't have an OEM dimension for it's spacer/mount as mine were lonnnng gone...but they ride straight down the rocker and meet the fender as they should.

After much finagling and adjustment, the front clip all looks good as far as body lines go - the aprons run straight down the hood in both dimensions (laterally and vertically), and the bib also sits nicely at the front both fore/aft and left/right. The only oddball thing I've got at this point is that the bib sits about 1/2" high from the frame, so the hinge would need a spacer block.

In theory, you could lift the rear of the tub about 1/2", but then some of the body mount gaps would be off under the tub, and the rear bumper gap would be large as well. My $0.02 is to let things ride and just use a thicker shim/spacer under the hinge...in terms of battles to fight, that seems like the one given all the other areas look good and it's the least noticeable and simplest to adjust out.

Anything I might be missing there otherwise before I send the firewall/tub joint home with the welder? 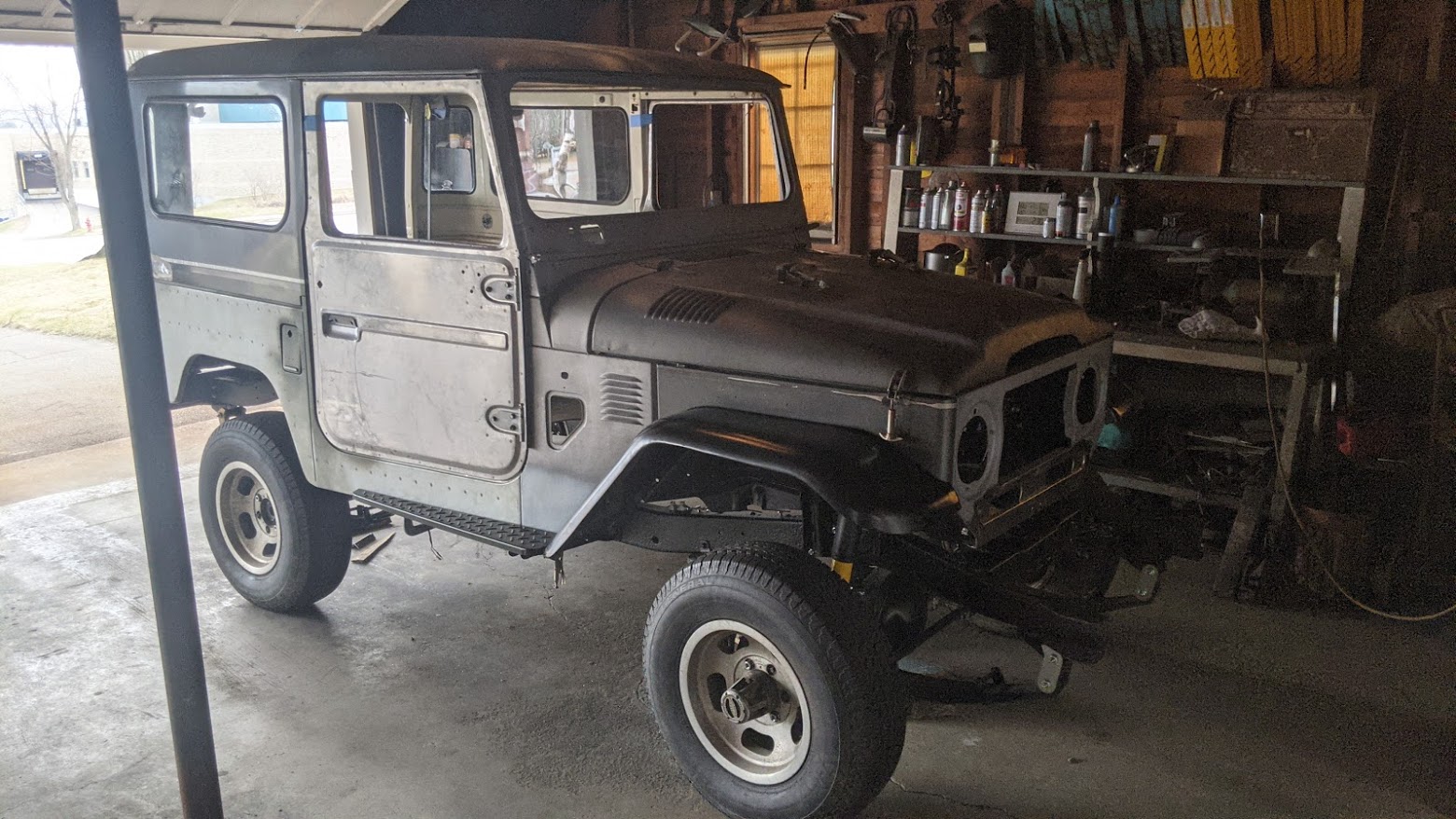 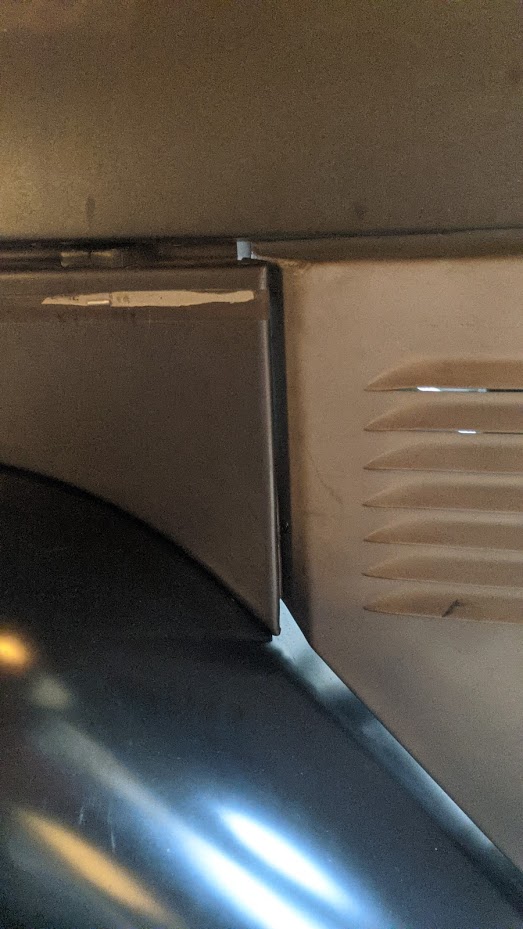 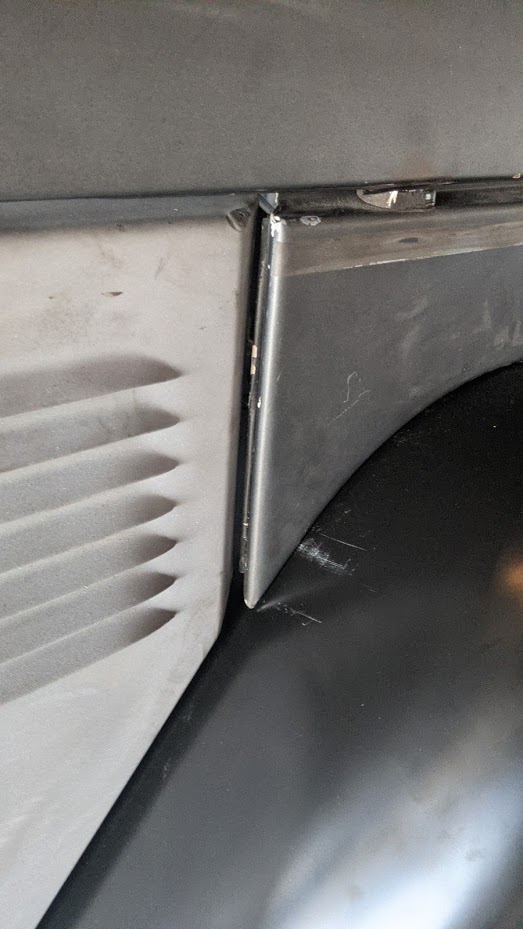 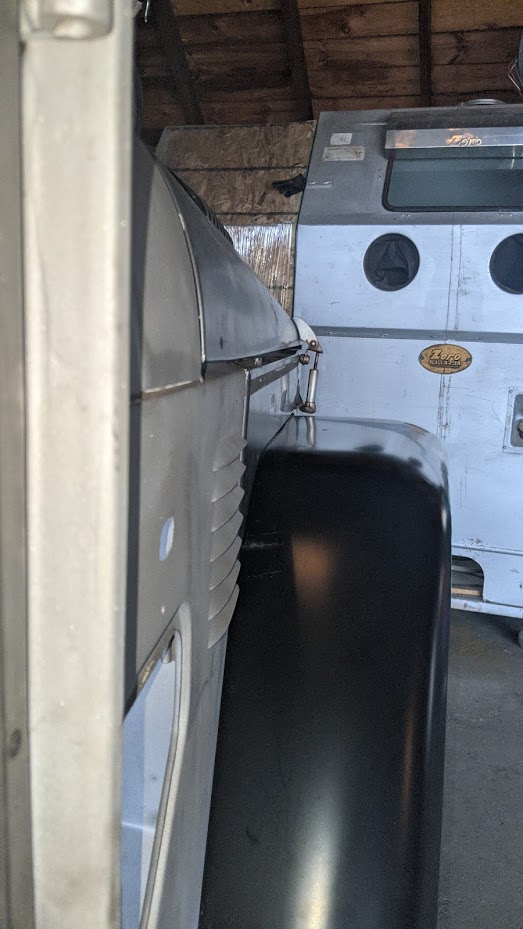 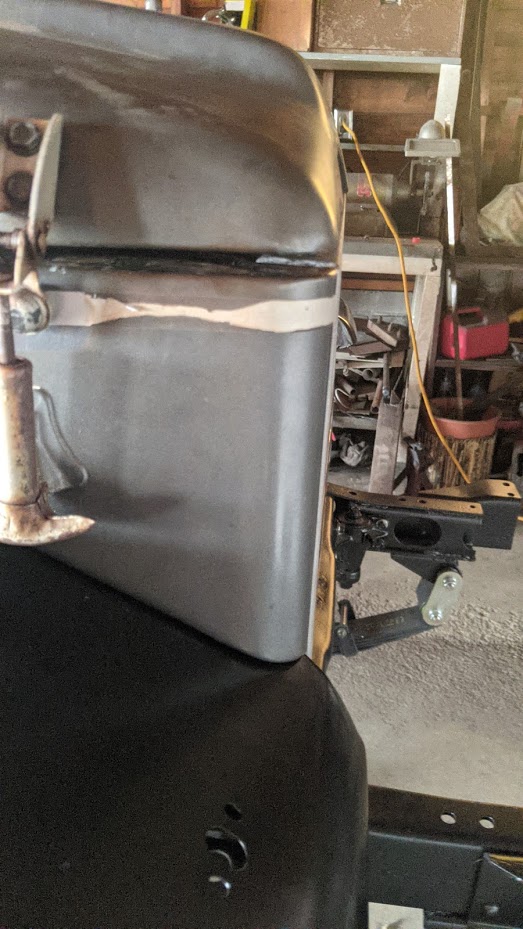 I feel if you cinch down the front body mounts under the cowl, they should line up better. Now is the time to make it perfect cause once paint is done you’re kinda stuck with what you have. I spent hours making sure mine would be perfect, and as I assembled after paint, everything lined up perfectly.

And as a side note, I don’t have a single shim anywhere for panel alignment. In other words it can be done it’s just a giant PITA.
Z

Front body mounts are tight, but will see if there's any wiggle there. (They're the SOR poly blocks.)

How much of your rig was OEM vs replacement? I'm fighting a bit there as well - rear frame rails were redone(this was the second time, too), tub is new, fenders are imports, etc...

Your fit looks excellent, and I fear that if you did NOT run a spacer block under the bib hinge, you would be inviting many hours of continued work to get the body to fit well without a spacer.

Having said that, have you studied the 'next body mount back' from the too-high bib hinge area, to see if you can lower the entire front end back to the firewall? Can you unbolt and slide the fenders down near the shock tower to lower the whole front clip? (I doubt so, but I thought I'd ask).

I would be triple-sure ALL your doors and the hard top fit nicely and operate properly, since that will annoy you (down the road) likely more than anything else. I agree with Jetlander that it must be perfect before painting, as any adjustments afterward will be ugly and risk paint damage.

Agree 1000000000% on getting everything fitting (as best it can) before paint...paint is all in the prepwork, and redos are much less than fun.

Did some more rolling around on the creeper and checking measurements. It's very odd - no clue how it's sitting like it is, given everything else seems pretty on par. From the rear up to the firewall, all the body mounts are sitting well, except for one in the middle near the b-pillar that's too low to slide mount in. I'm 99% sure that's just another issue in the CCOT/HFS tub though, considering all the others are in line. I don't see any wiggle room in the mounts themselves, they're snug...so doesn't seem like that's the issue offhand either.

I can't say for sure how it's supposed to sit, but the tub is parallel with the flat run of frame by the trans, and the firewall is 90* perpendicular to that (within reason). Shooting down the apron using the firewall as a reference shows the apron sitting "correct" to the firewall as well.

It seems like:
In terms of places to finagle:
It's definitely "wrong" in some manner, somewhere...and I'm guessing it's somewhere in the tub, but I can't spot it particularly...and even if I did, I'm not yet sure what you'd do about it. There is a chance the rear bumper is low from being reworked twice, but it was in line with the old tub and it's sitting generally OK now as well.

Curious if the extra info triggers anything new with the crew here...as I'm still not seeing much jumping out to change just yet. 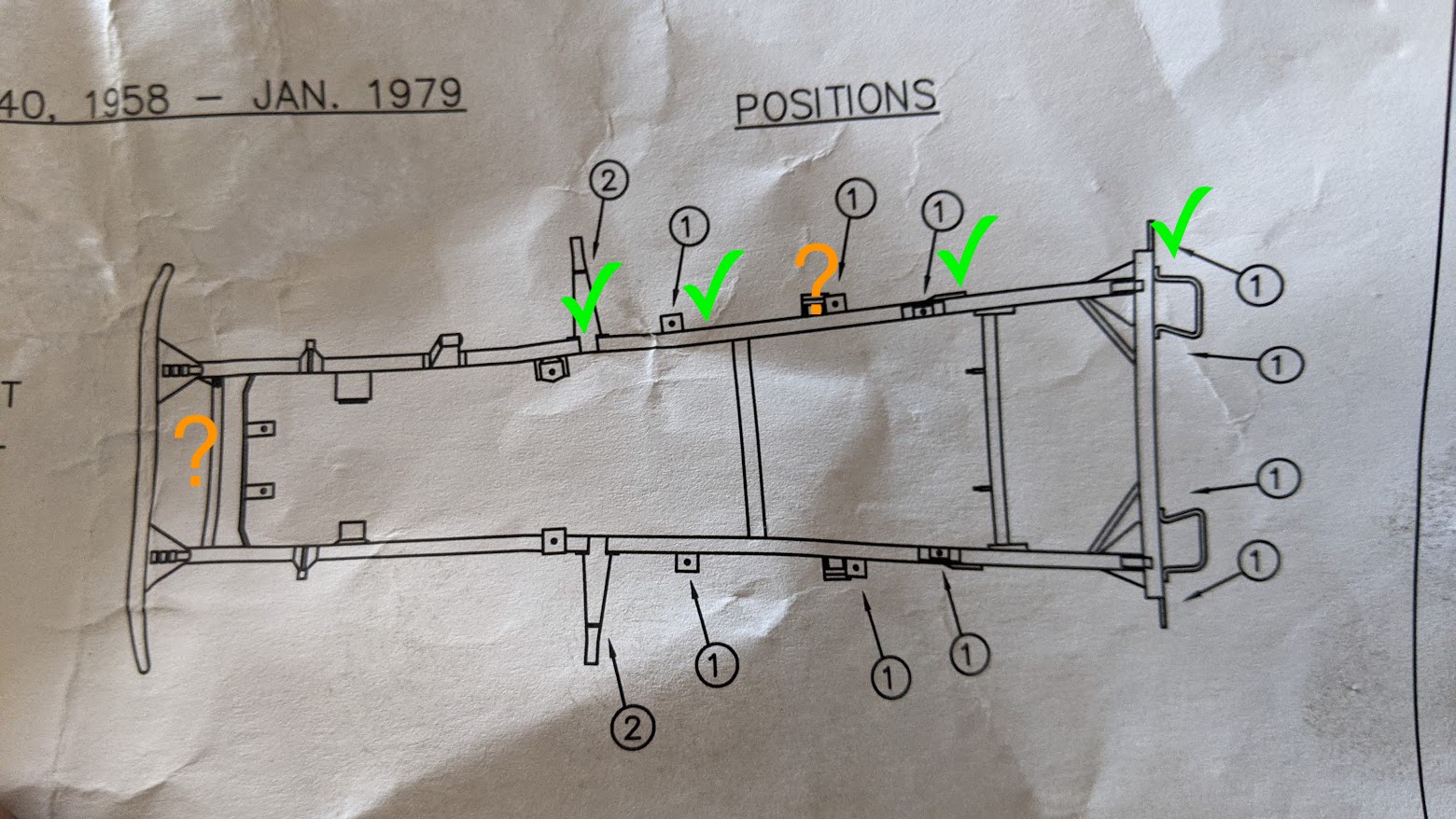 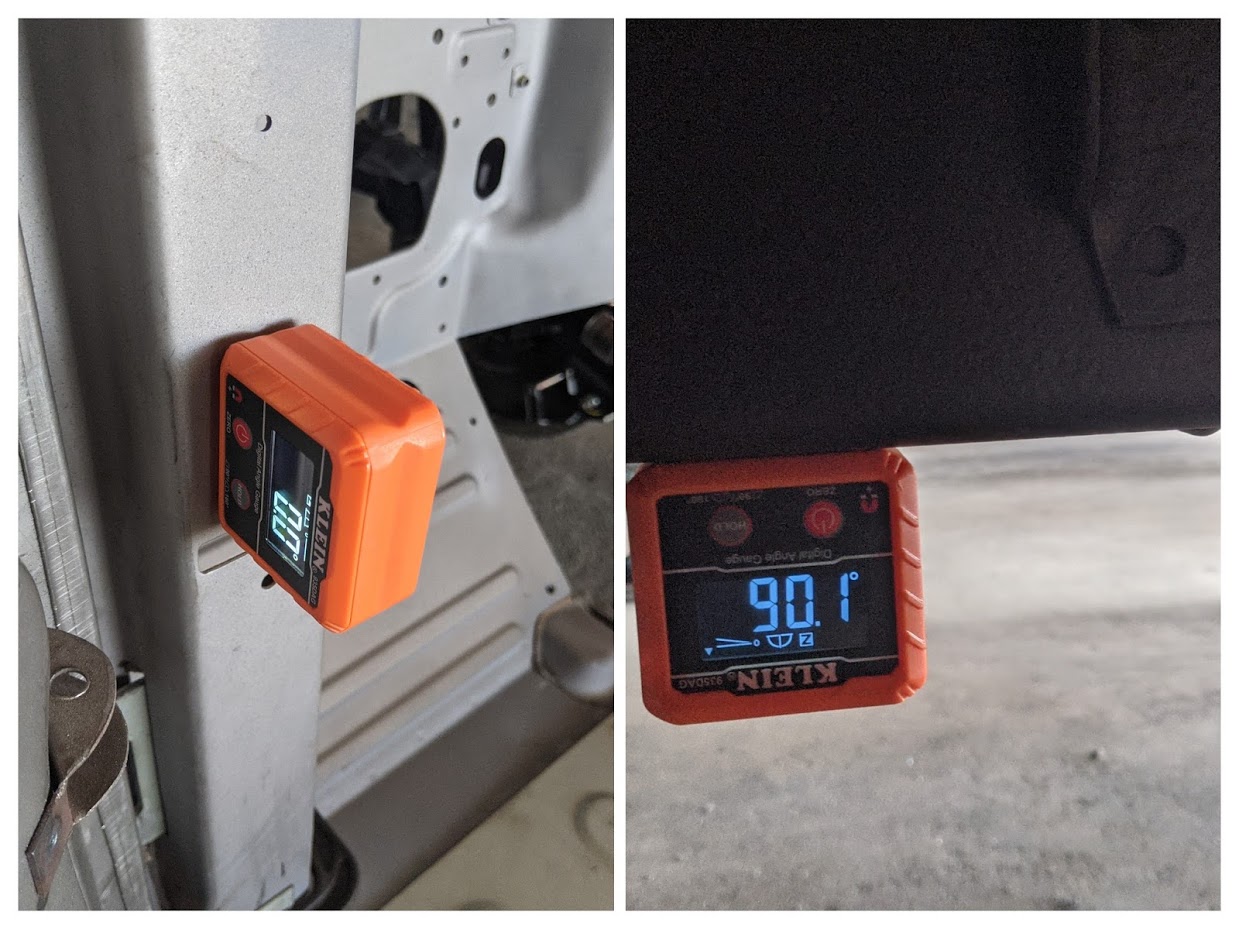 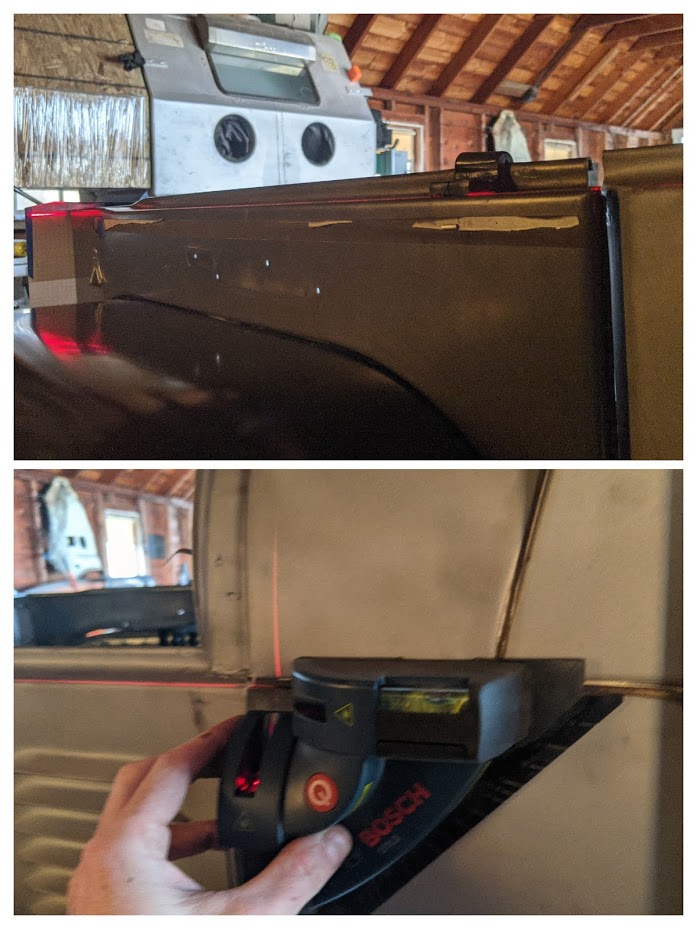 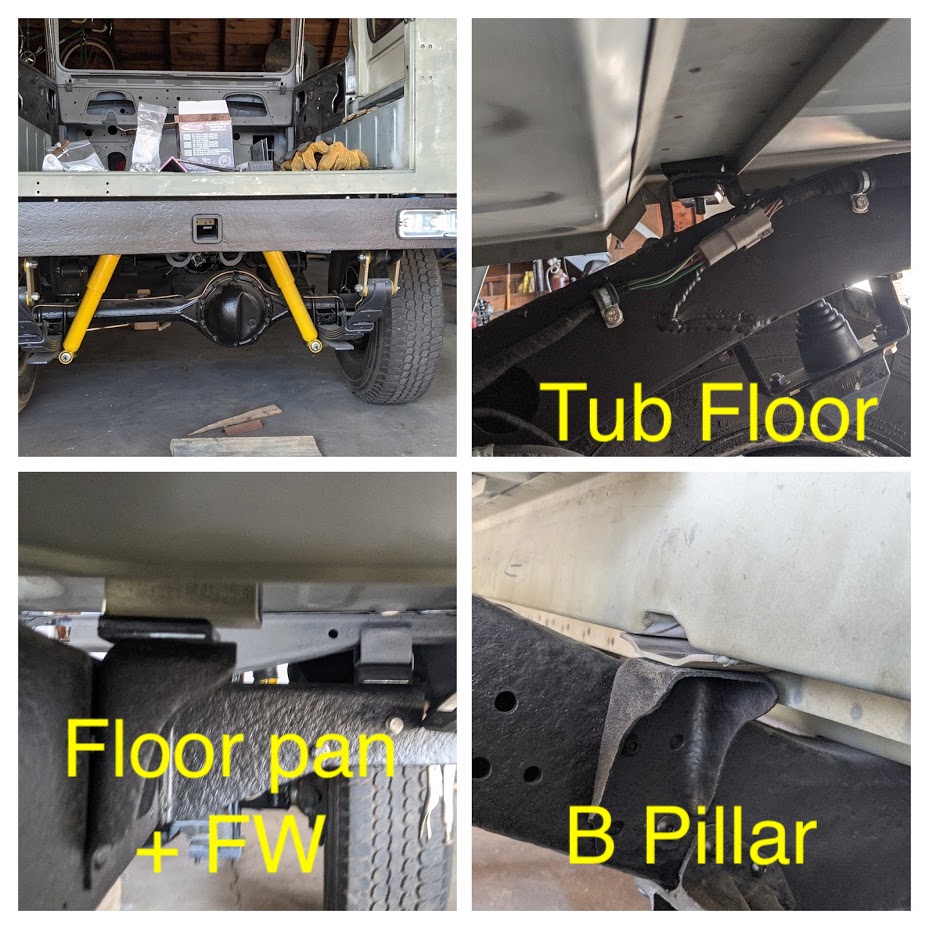 there is a factory spacer that fits between frame and bib hinge; btw 3/8 and 1/2
Z

Interesting...mine still only had the OEM rag/canvas patch, which was only about 1/8".

Looking at your B pillar picture it is hard to tell but is the frame mount riveted to the frame or bolted. If bolted it might have been placed to far up.
Z

B y r o n said:
Looking at your B pillar picture it is hard to tell but is the frame mount riveted to the frame or bolted. If bolted it might have been placed to far up.
Click to expand...

I had to pop them off for some repairs when I had it down to the frame, but the reused the OEM holes to go back on. There's a chance they're a smidge off, but should be under 1/16 at the most.

zerotreedelta said:
Interesting...mine still only had the OEM rag/canvas patch, which was only about 1/8".
Click to expand...


yeah that’s the one, now I need to find mine, measure and install.

It’s in my shop hiding somewhere,
hmmm.... maybe i’ve been looking for the wrong thickness

Argued, negotiated, persuaded, and wrangled the front clip some more today...improved it a twinge, but it inevitably ended up back about where I started, even after pulling the fenders off a couple times and tweaking and tuning.

Seems like it's the nature of the beast with this combination of frame/tub/mounts/fenders...could be worse. Bib sits both level and square, hood sits square...I don't think fighting it anymore will help, but at least a smallish spacer shouldn't be too noticeable. One of those things...
You must log in or register to reply here.

B
Converting my FJ40 to Dot 5 brakefluid. Has anyone done it? Is it worth it?

Thursday at 9:45 PM
Living in the Past

Suggestions on best way to add hubcap clips to steelies?