Okay. 25 ft of brake line and a package of fittings should be here Thursday.
Wish i could find the bracket, no luck yet.

I will rent the bending and flaring kit. Now i can appreciate that air conditioning class from HS - learned to work with copper tubing.

While i am waiting, i have been tearing down the steering to clean, paint, and rebuild.
Replaced very bent tie rod. NOT replacing slightly bent relay rod.

I'm just working my way back from the knuckles. Measuring length according to FSM center to center. Seems like one full turn either way would cause measurements to go way off so i hope this thing will drive straight when I'm done. And stop

Center arm internals were UGLY. Had water sitting on top of grease. Sleeve was not "tabbed" in place. I made the mistake of driving it off with ball joint seperator - seemed to drive the seal and shaft IN as arm comes off. I suggest using the correct puller to not damage the housing. 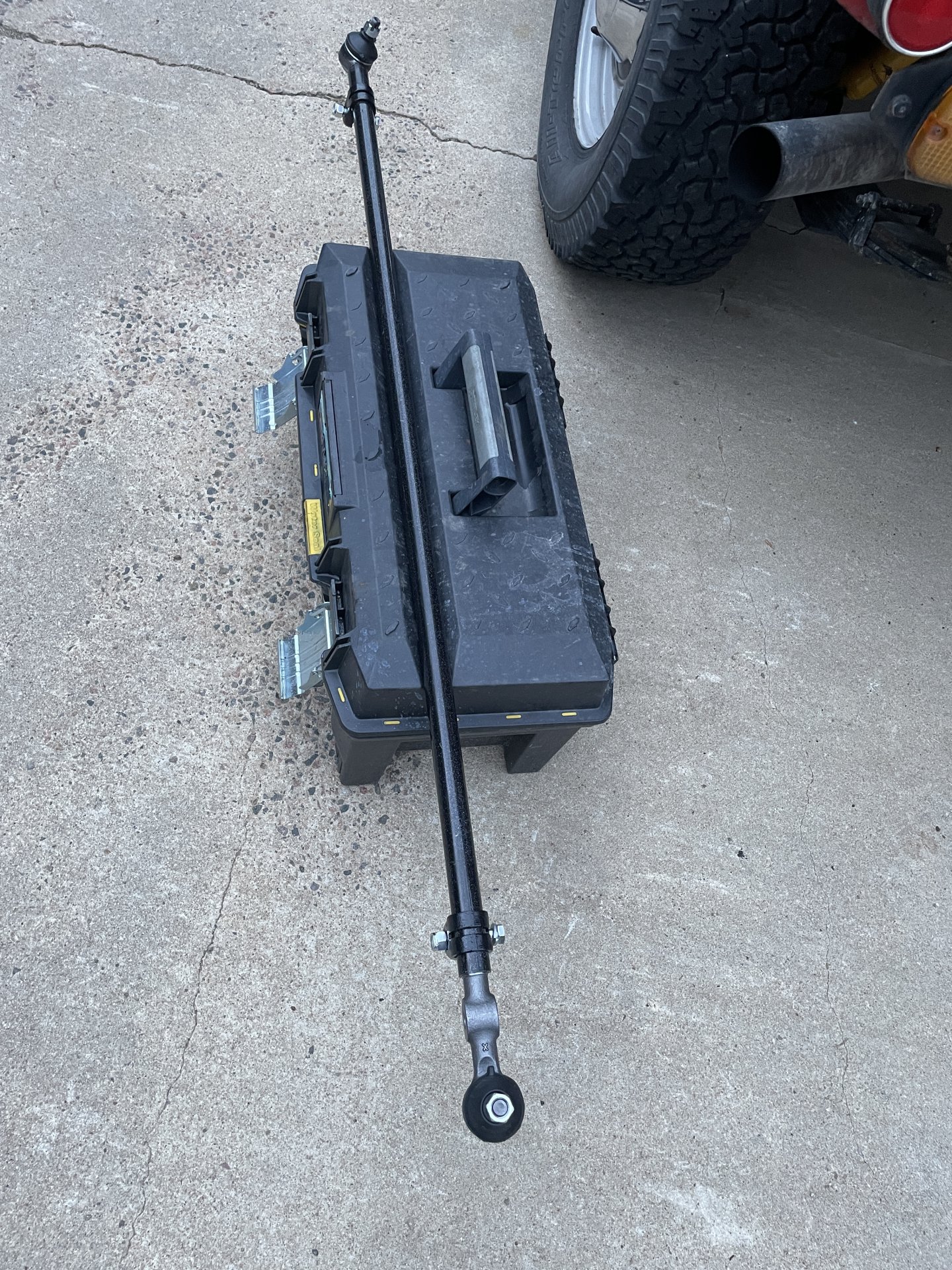 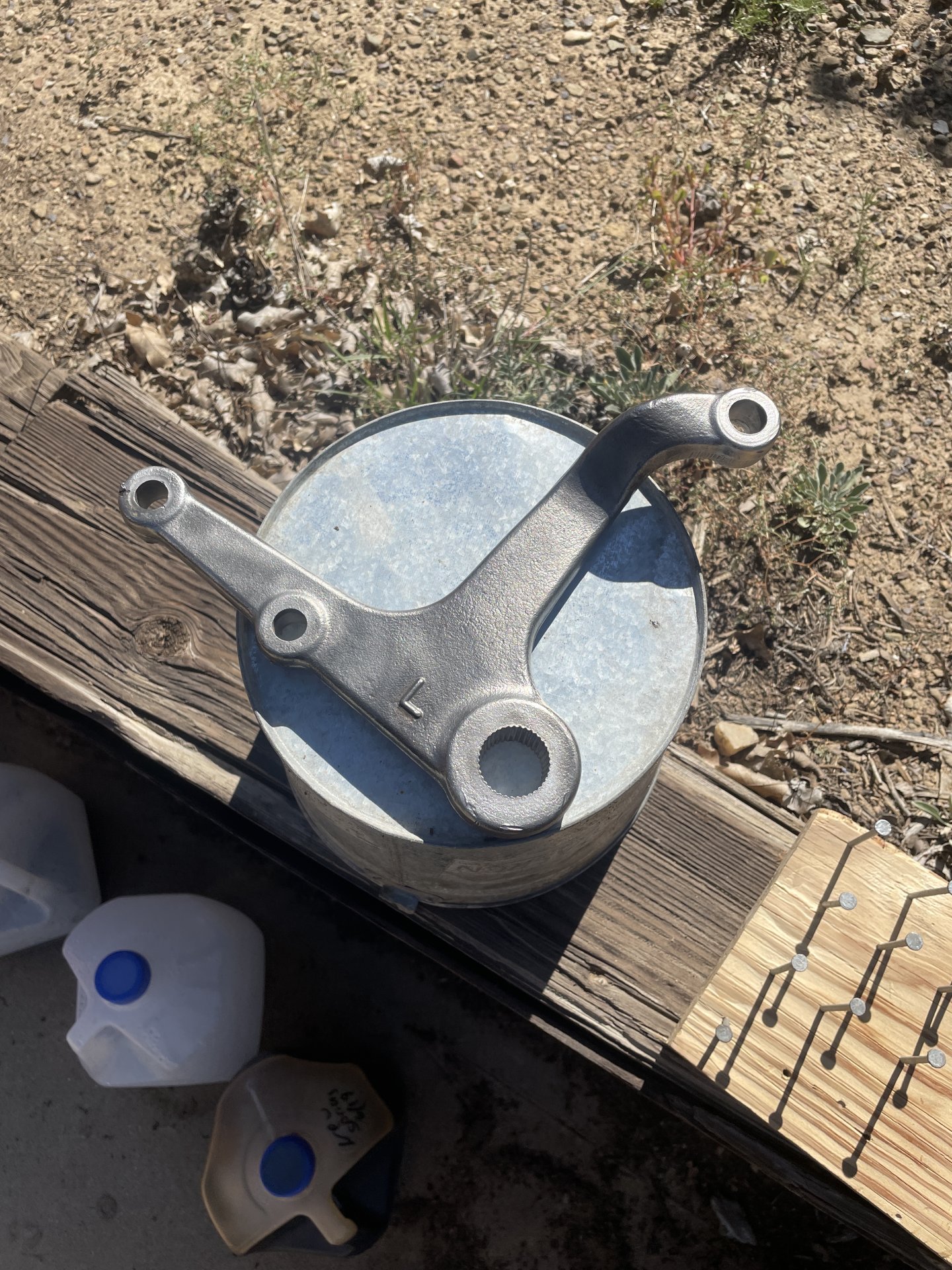 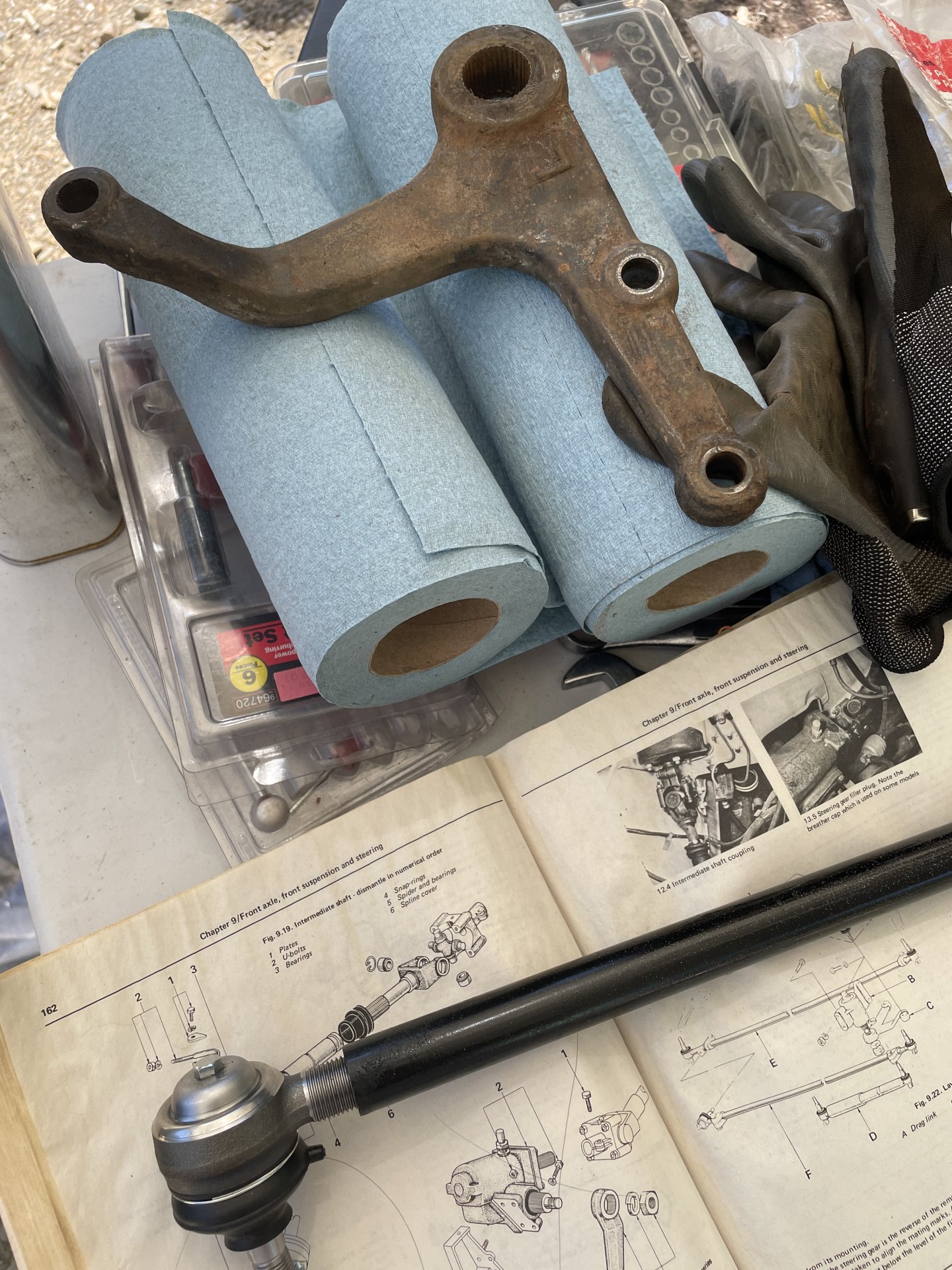 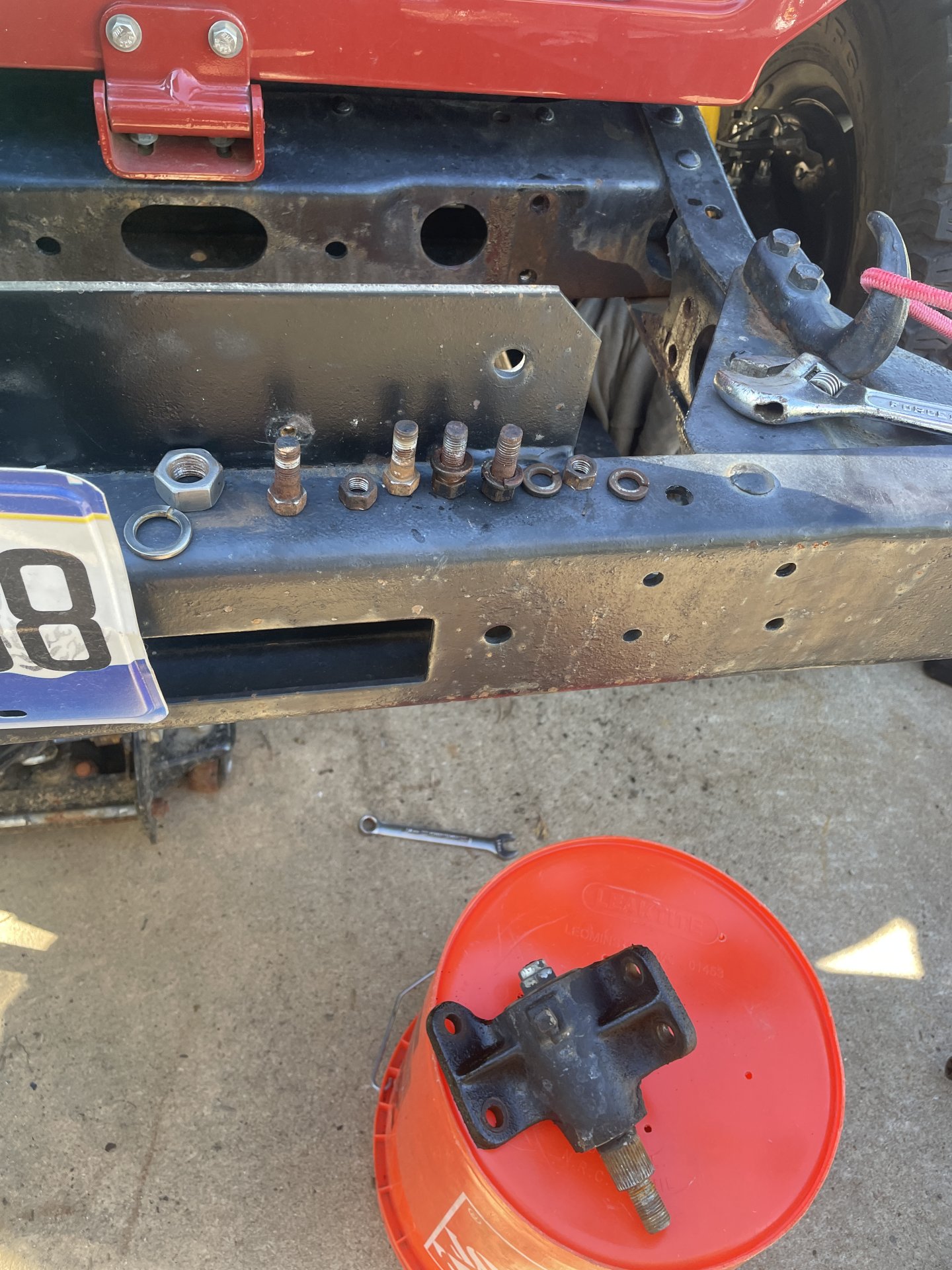 Rebuilt the center arm with kit i had for years 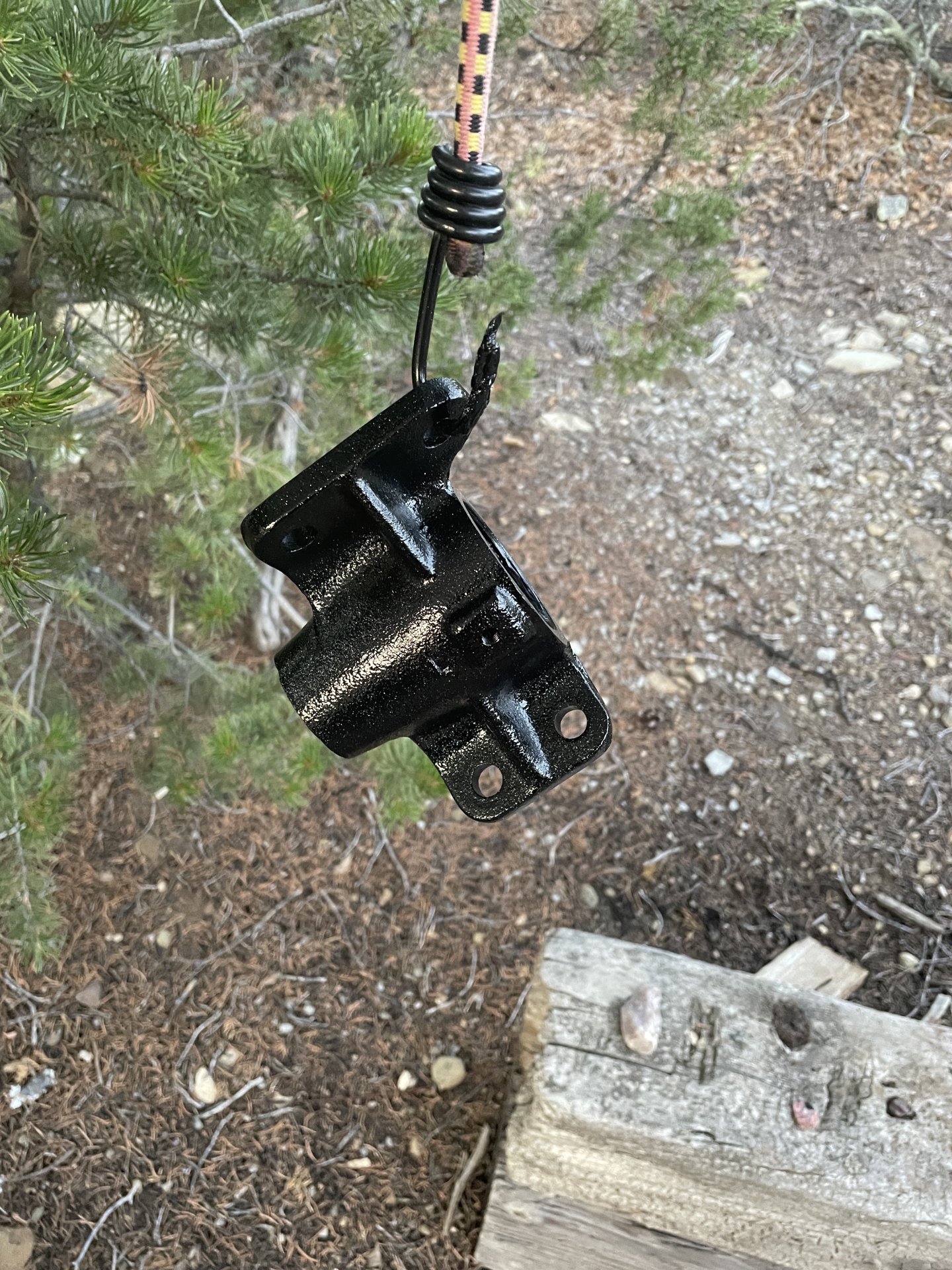 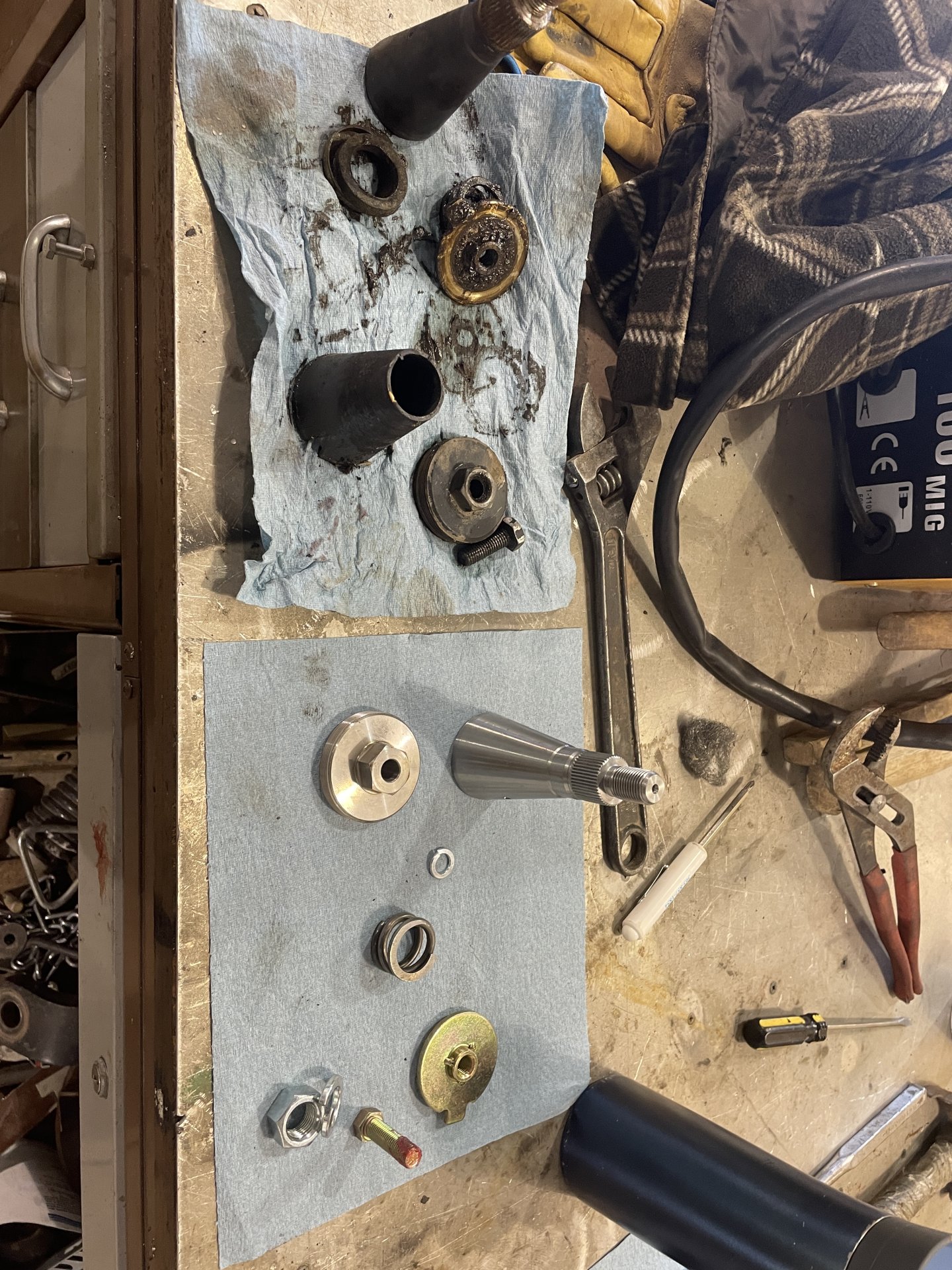 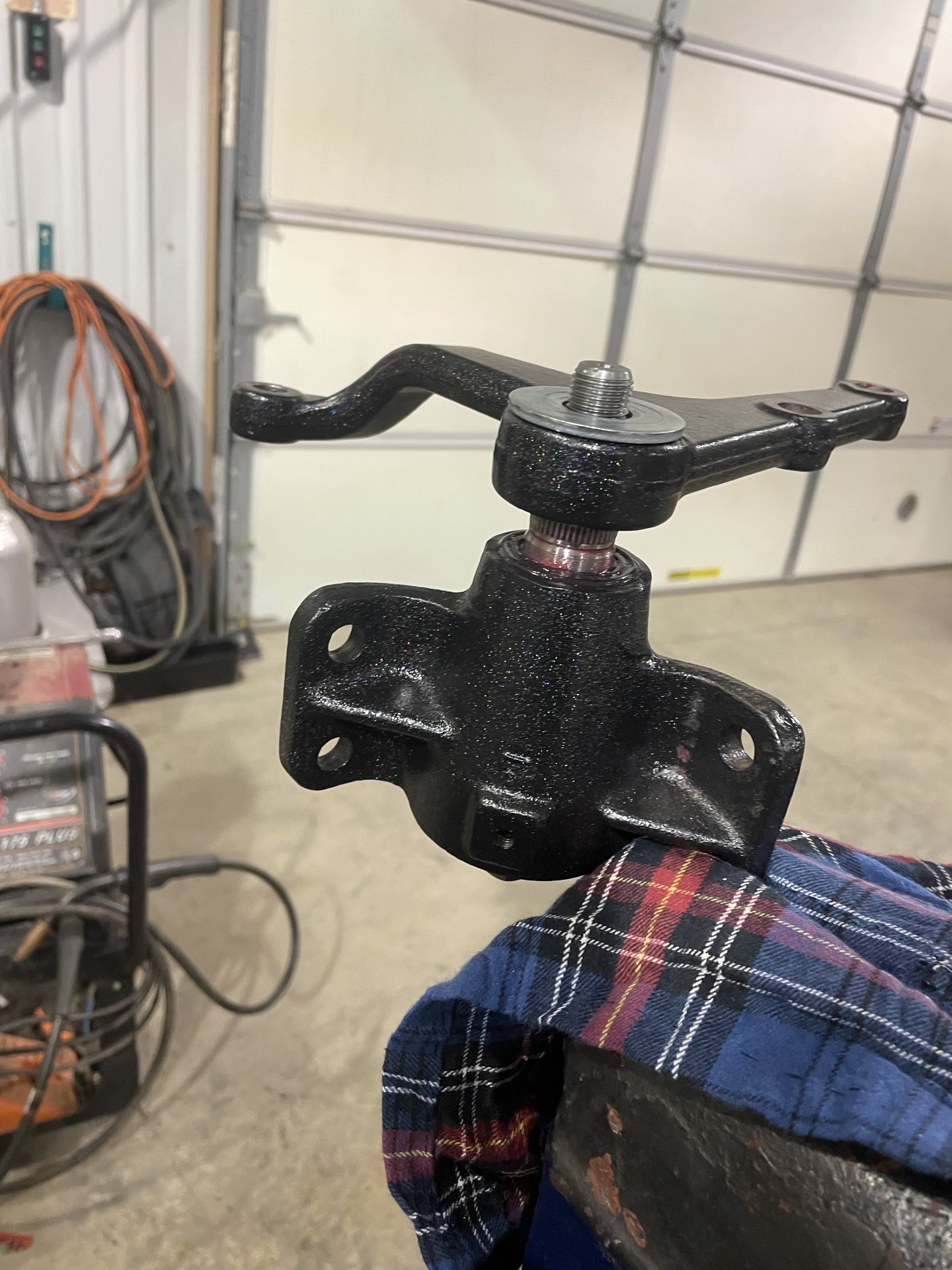 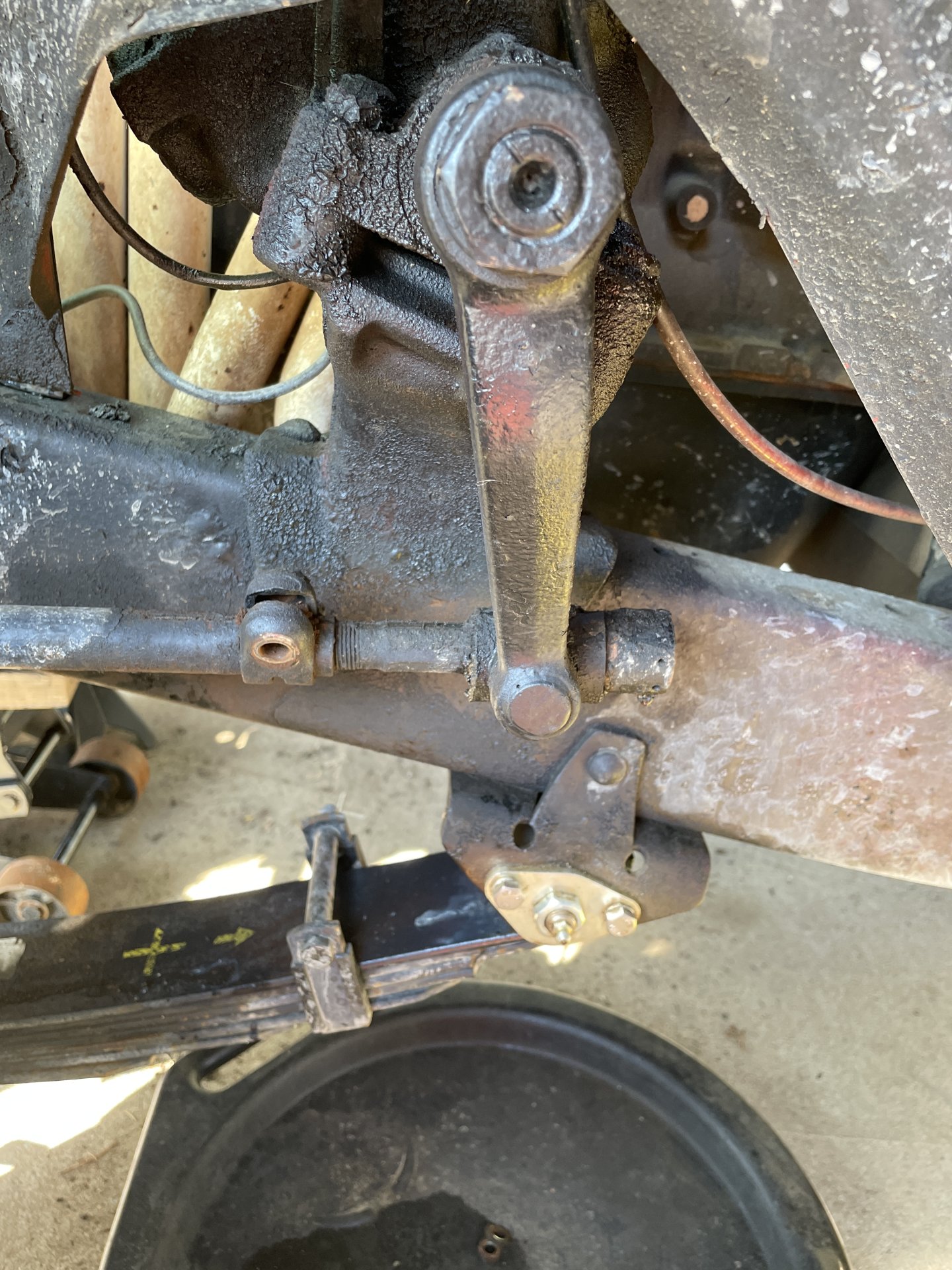 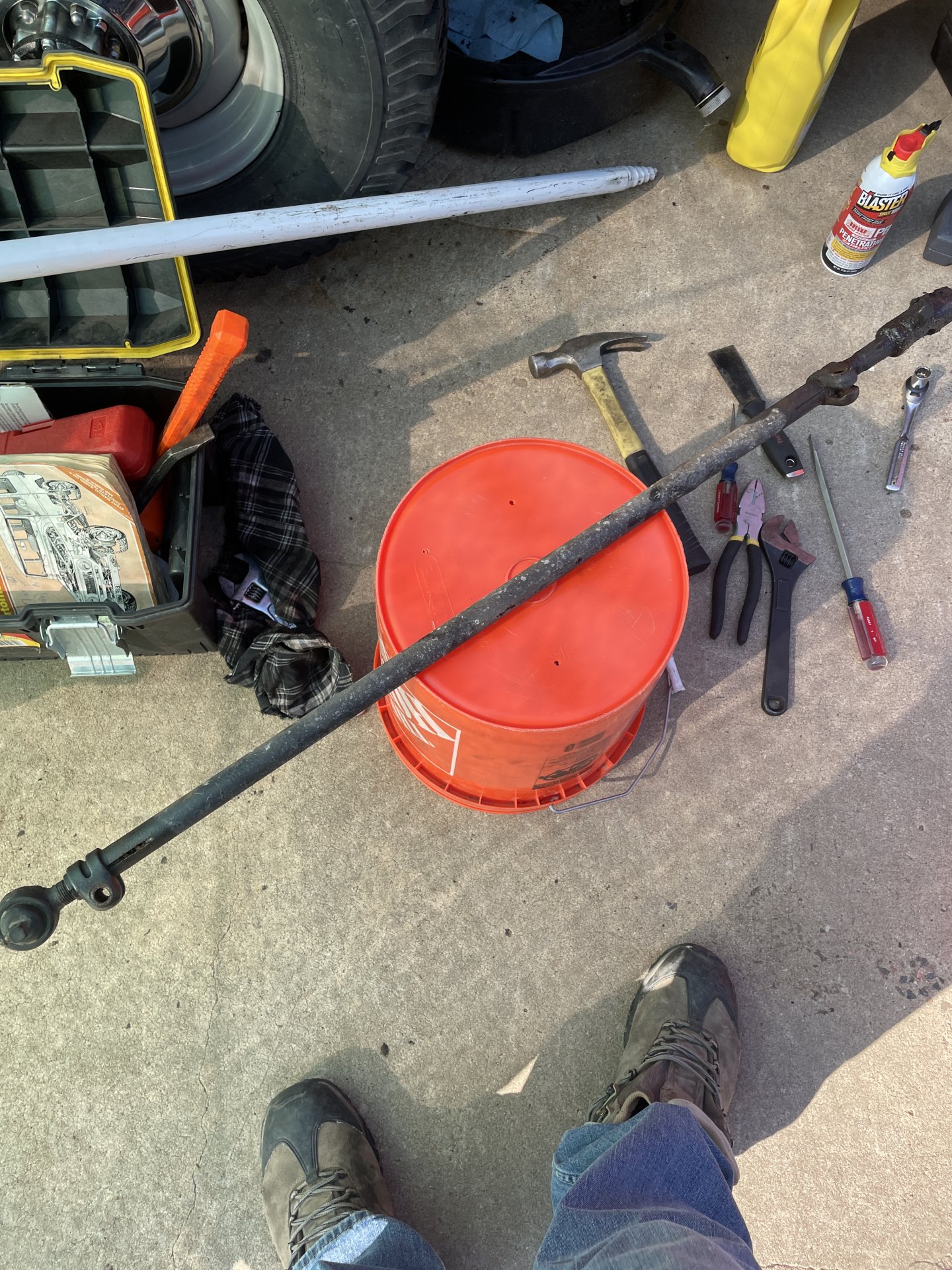 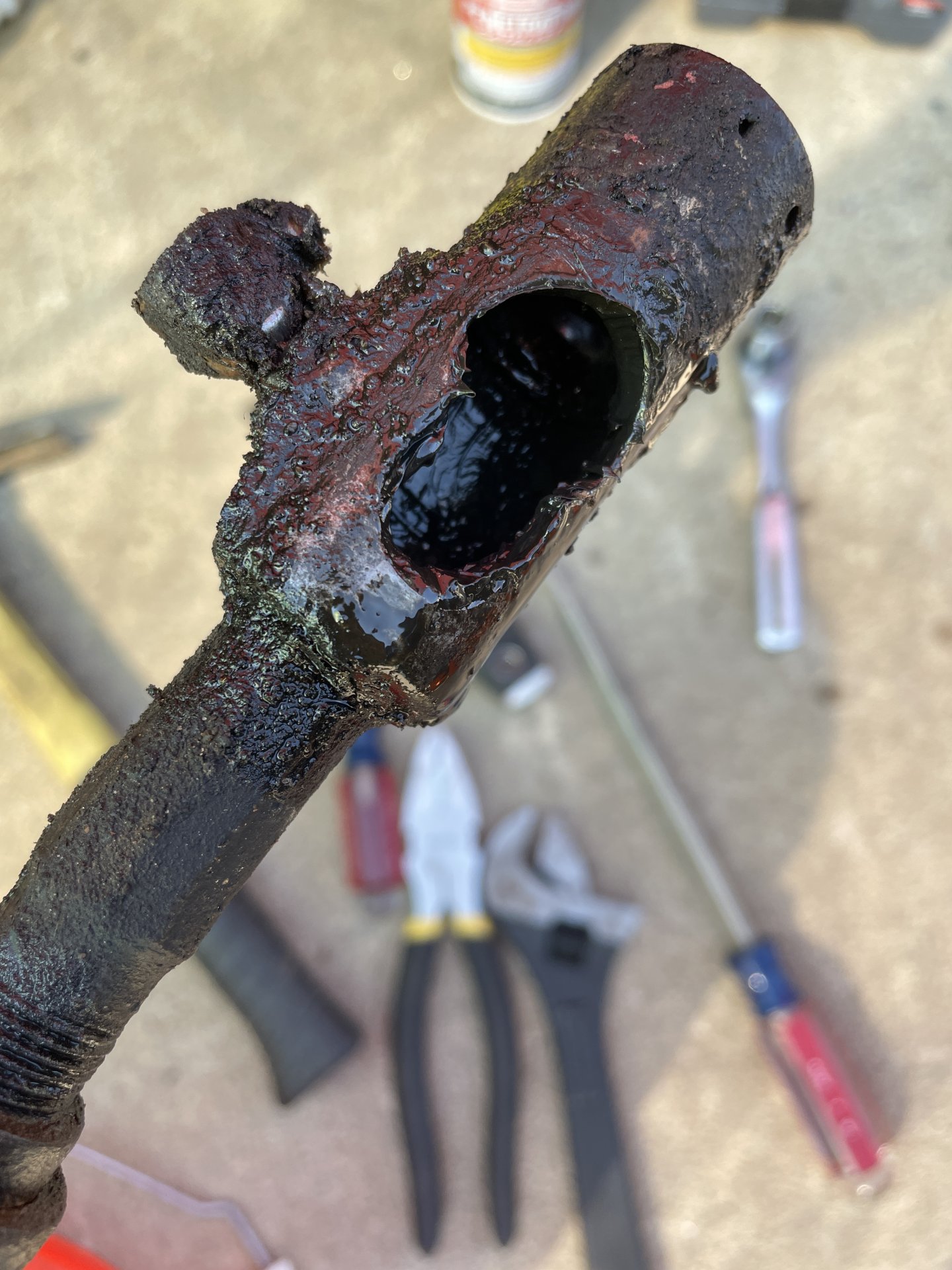 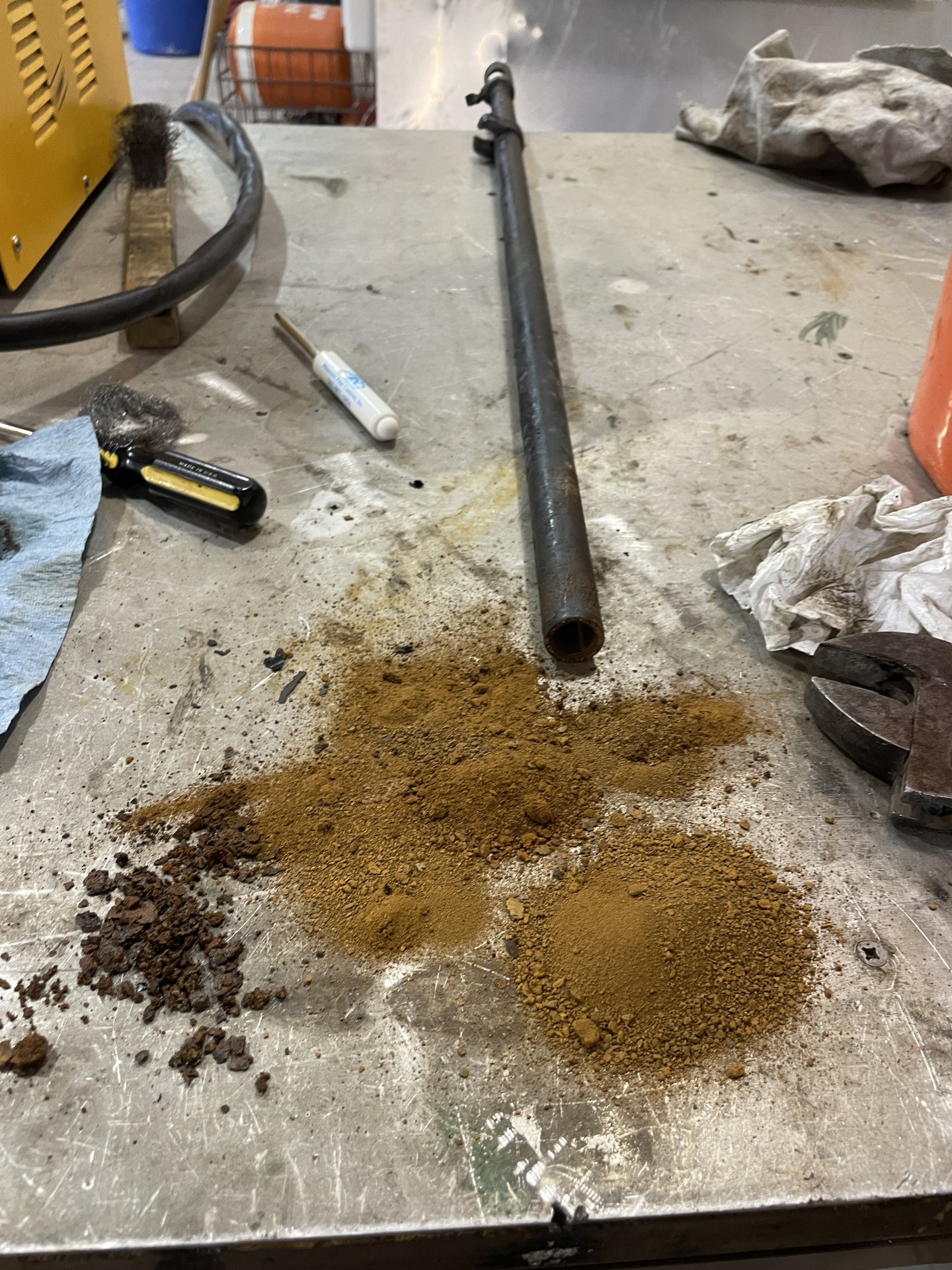 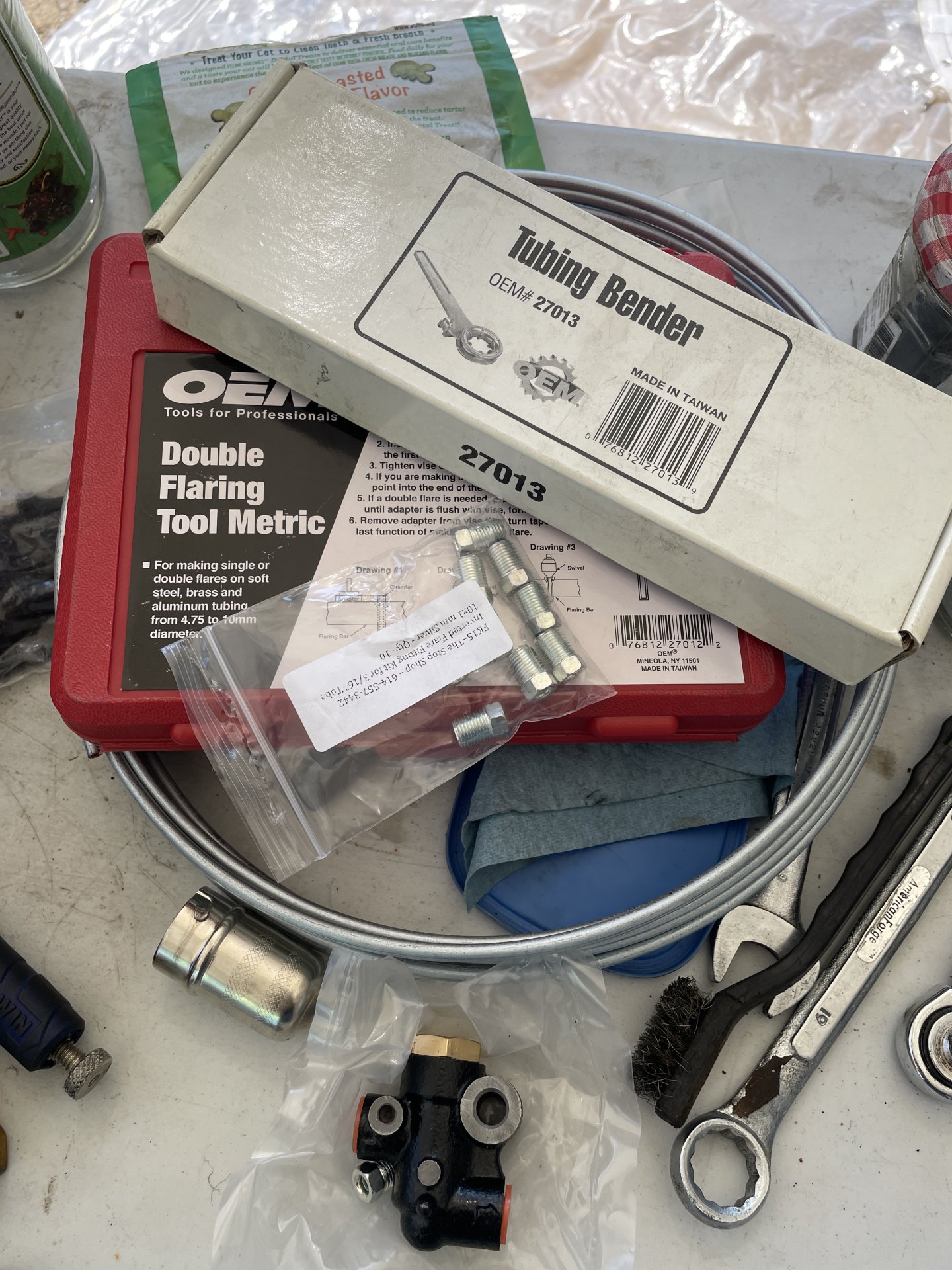 pb4ugo said:
Be sure to double flare the metal line connections.
Click to expand...

Thanks for the heads up... if i get tripped up, it will be something small on my part. Like this

dazerb said:
Thanks for the heads up... if i get tripped up, it will be something small on my part. Like this
Click to expand...

Since you are a pro at this and I am nowhere near, can you give me some advice for getting the knuckle arm and bearing cap off? Just a BFH? 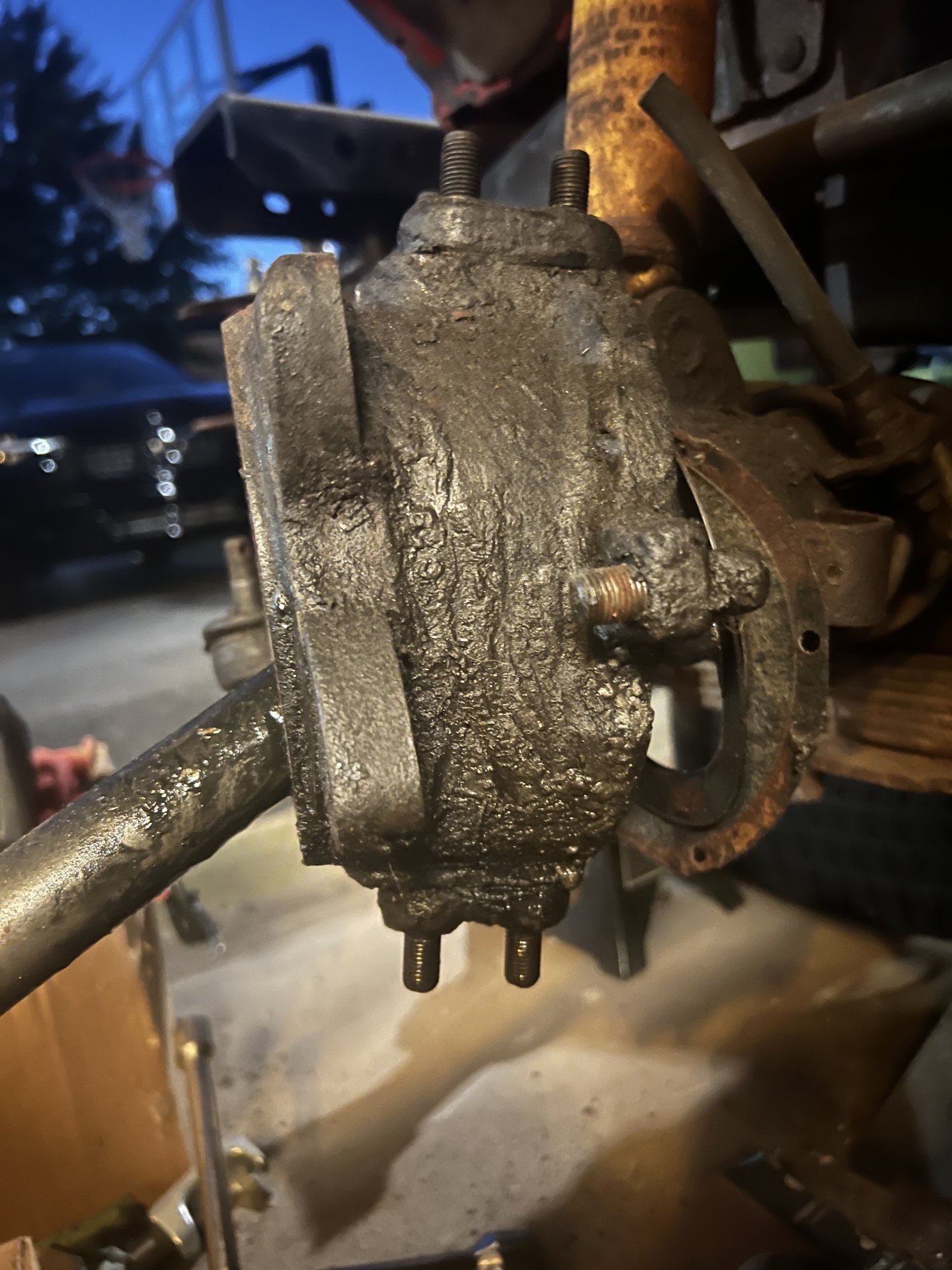 kjm76 said:
Since you are a pro at this and I am nowhere near, can you give me some advice for getting the knuckle arm and bearing cap off? Just a BFH?

I was using hammer, a couple of whacks under the arm close to knuckle them a few whacks on the opposite side ... i used a brass drift which rested nicely against the knuckle and tapped it upward.
It will be hardest getting it off the first time, easier each time thereafter.
A few big whacks on the studs got y cone washers to pop. Use brass to not ruin the stuff.
I pulled all the studs to clean and lock tie them back in but not before getting them off.
That axle should come out of the way.
There is an SST that drives them off, but i did not use.
Watch a few people struggle with it on you tube.
Call me if you are stuck.
I just drove my rig today, first time since july 24... but i got stuck waiting on new burfs, then a new tire Rod, and in a small town, you can wait a week on a rental tool.
I will have to bleed again but man!!! I got stoppers now! And the whole front end feels waaaaau more tight.

Great post! Thank you. I am close to doing the same thing on mine. I found these videos last night and thought they were great. Between your post, and these videos, I think I am ready to tackle this project again (yes "again"... dont ask ).

Okay.
Finally got a handle on the flaring. My first practice bend came out really close so i just went with it.
I used an old muffler hanger i had laying around and cut the hook off then shaped it around the MC on the grinding wheel. This is for my new proportioning valve.

After struggling with the hand pump for a while, i went with the gravity one person method. Seemed to work well. Rt rear, left rear, front right, front left. We shall see. I have brakes!
Pedal travels far before engaging. Only tried a couple of back and forth s on the gravel. Much better stop than before but hand to figure out excessive travel. Booster and MC are sure thing compatible, another bleed coming up.
Seems to stop all four wheels same

No leaks or drips. Muuuraculous

My knees hurt n am hangry so will check it all over tomorrow
I drove around block and can really feel that whole new front end. Solid. Stable. Needs alignment and steering wheel is off kilter

but i know what i did there 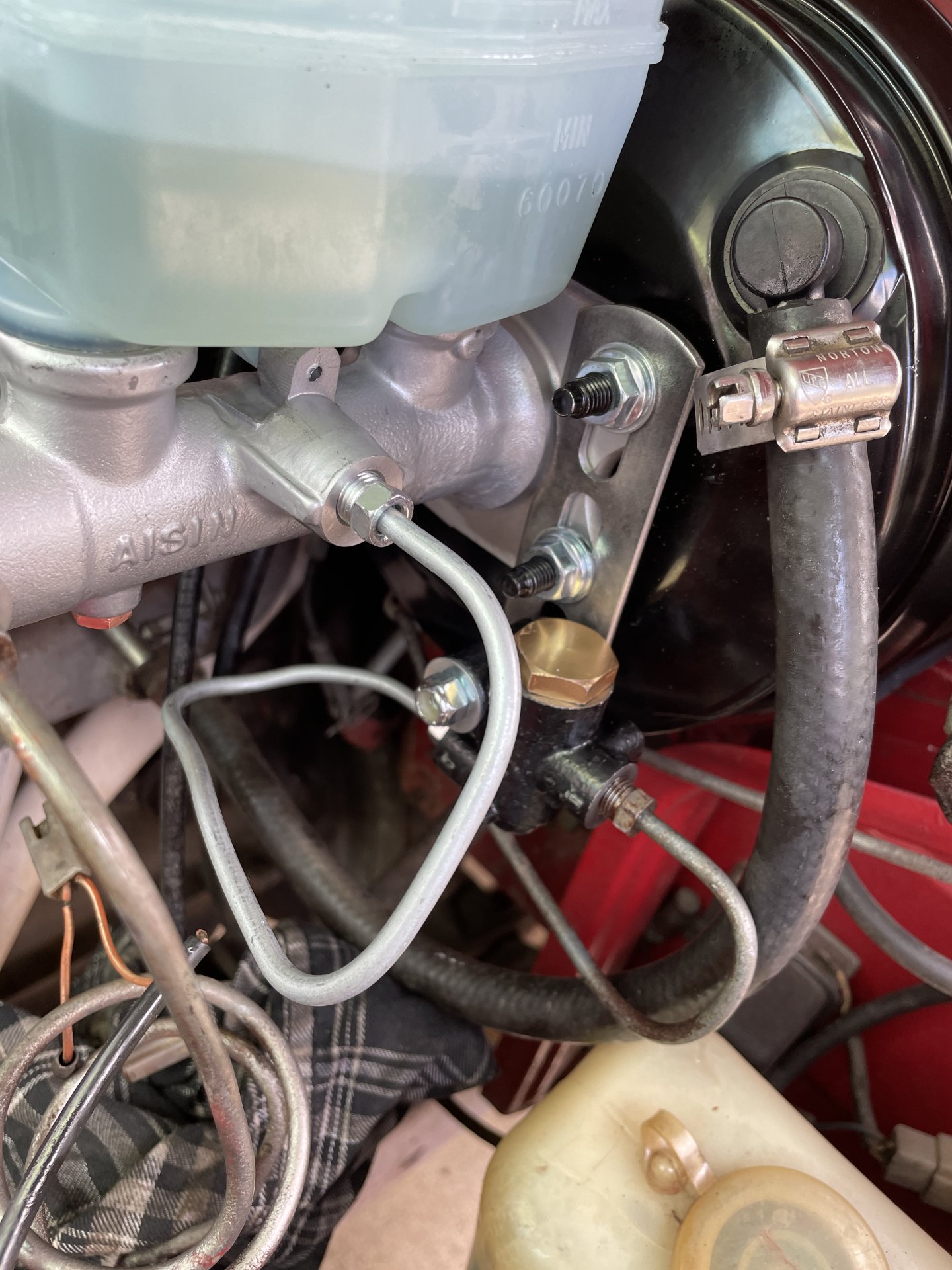 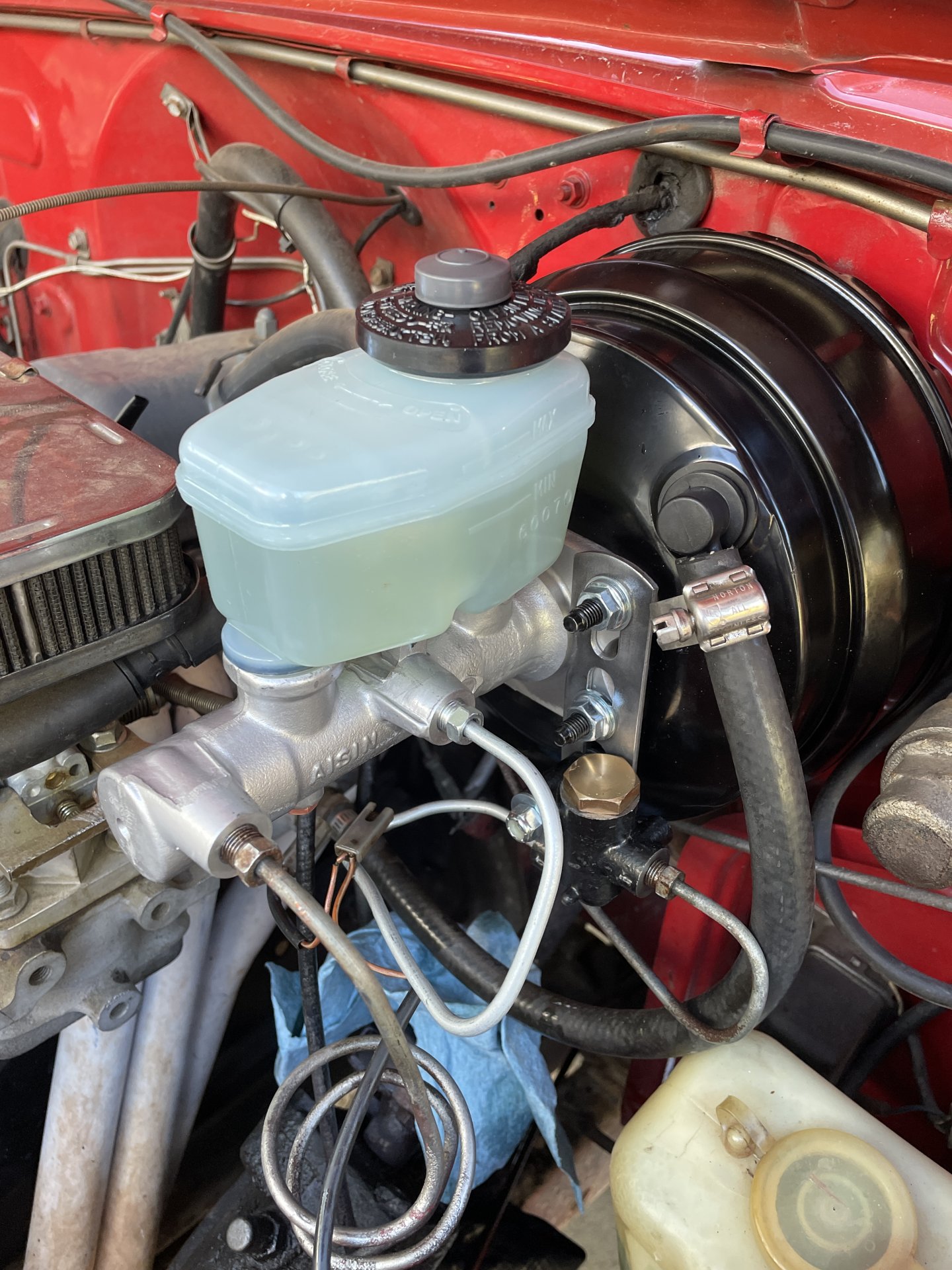 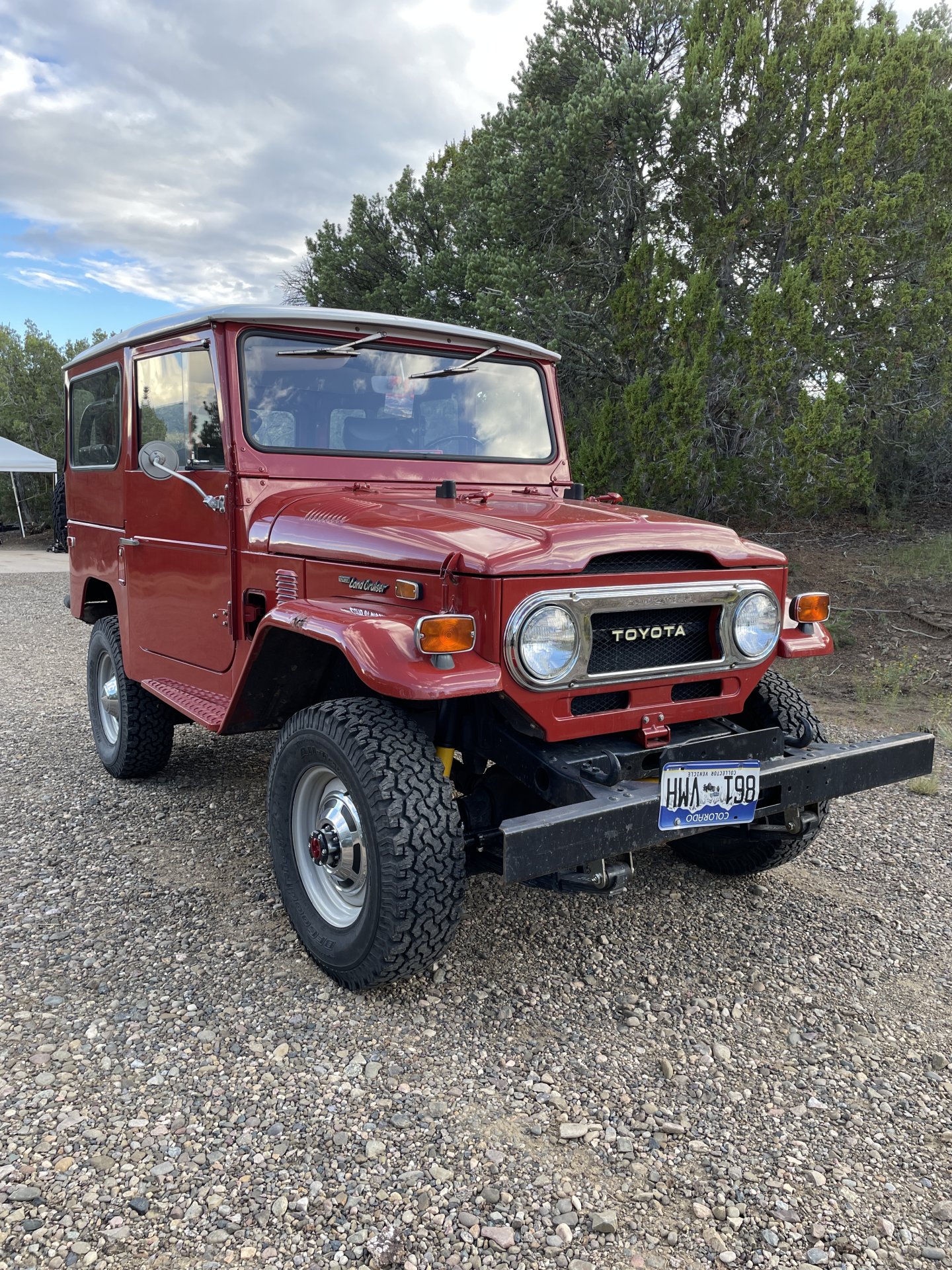 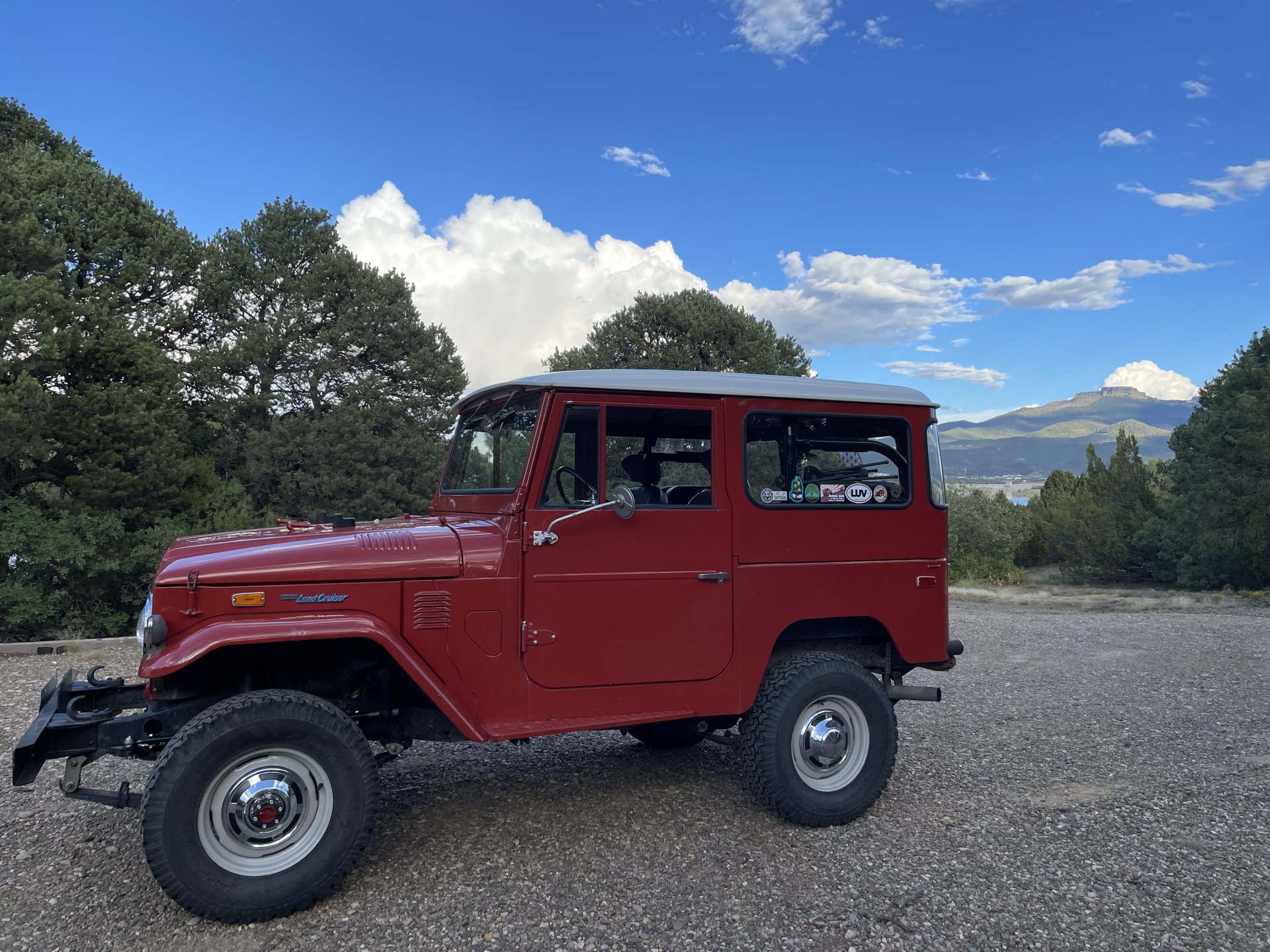 jvincig01 said:
Great post! Thank you. I am close to doing the same thing on mine. I found these videos last night and thought they were great. Between your post, and these videos, I think I am ready to tackle this project again (yes "again"... dont ask ).


I watched a LOOOOT of videos

jvincig01 said:
Great post! Thank you. I am close to doing the same thing on mine. I found these videos last night and thought they were great. Between your post, and these videos, I think I am ready to tackle this project again (yes "again"... dont ask ).


I'm trying to get all my "again" out of the way the first time!

i am seriously going slow enough to re check everything, I've made so oooo many mistakes, but have hopefully caught them all.
I prolly have cancer from spraying brake fluid all over my self and driveway...
I try to own up to my foolishness in real time.

Soooo, I've been driving this thing around and making adjustments...

Brakes are awesome! Stops reliably. Haven't gotten it up to speed yet due to I'm an idiot who replaced all tie Rod ends and now can't go straight

Seems like i can feel the rear start to grab, then with a little more pedal, the front come on and they come on strong with more pedal. Night and day difference!!

2 months of driveway fun. I took my time, took breaks to study, waited on unexpected parts that i needed to replace ( tie rod, birfs) and prolly took everything apart and back together many times... 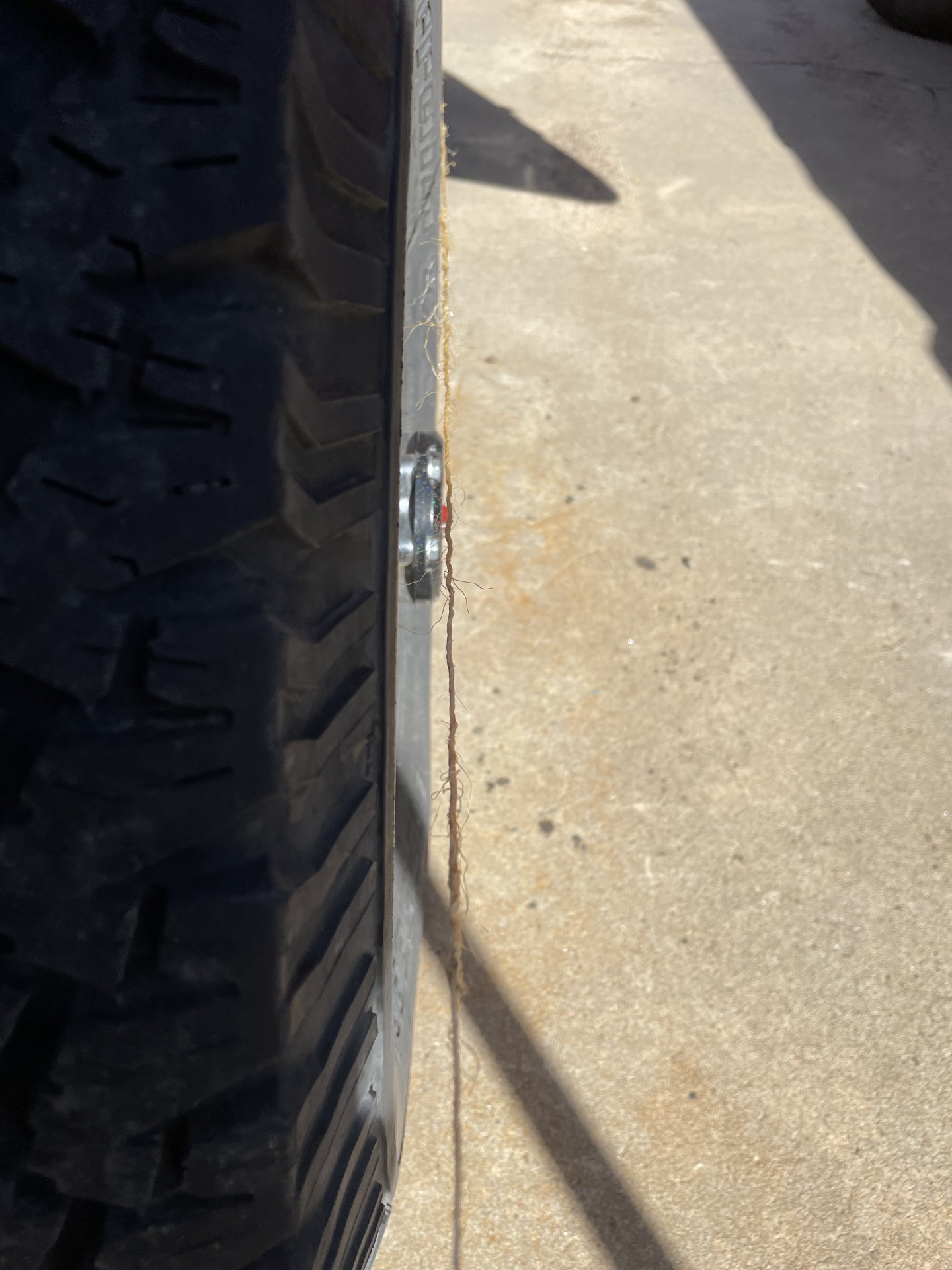 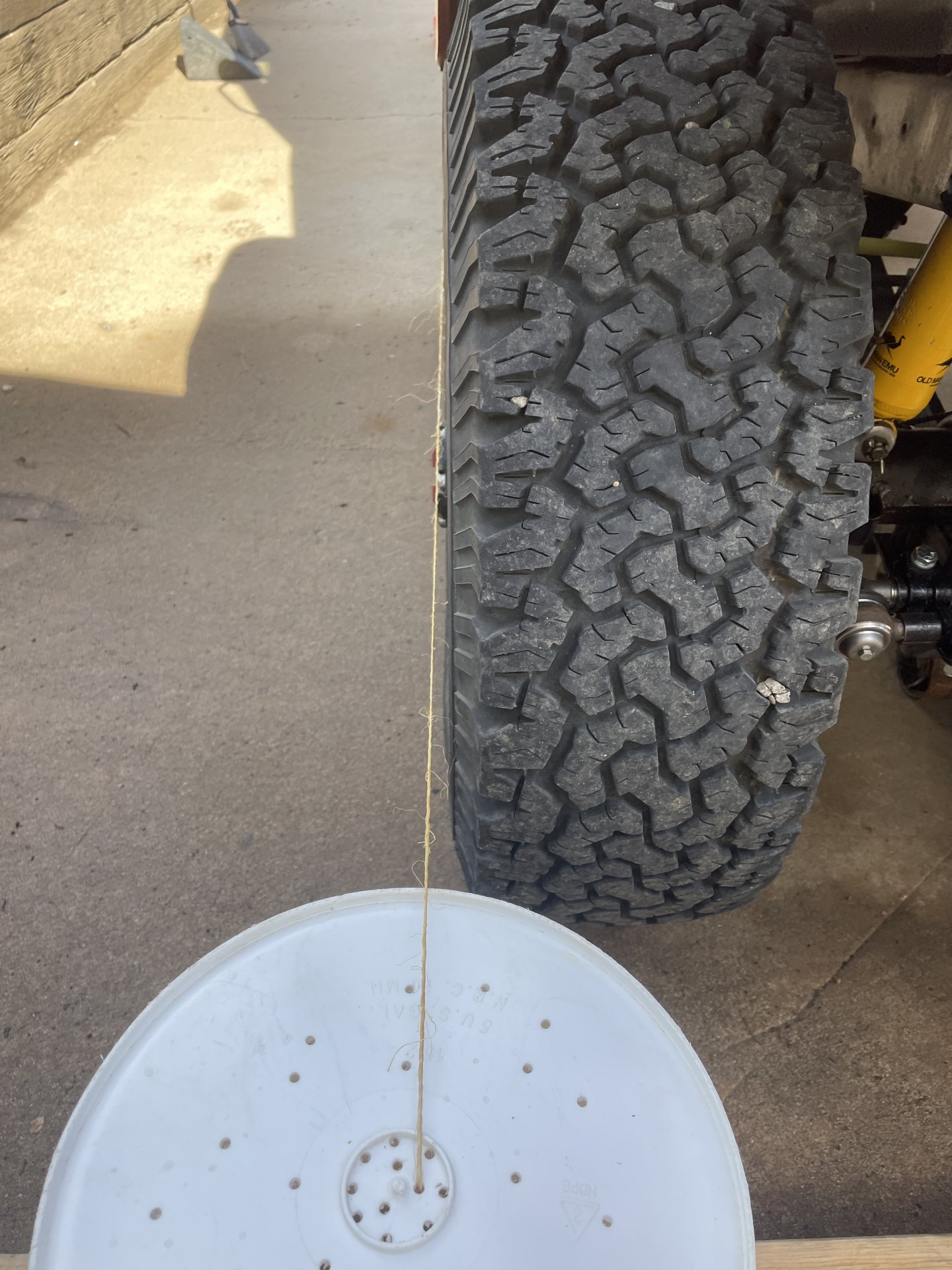 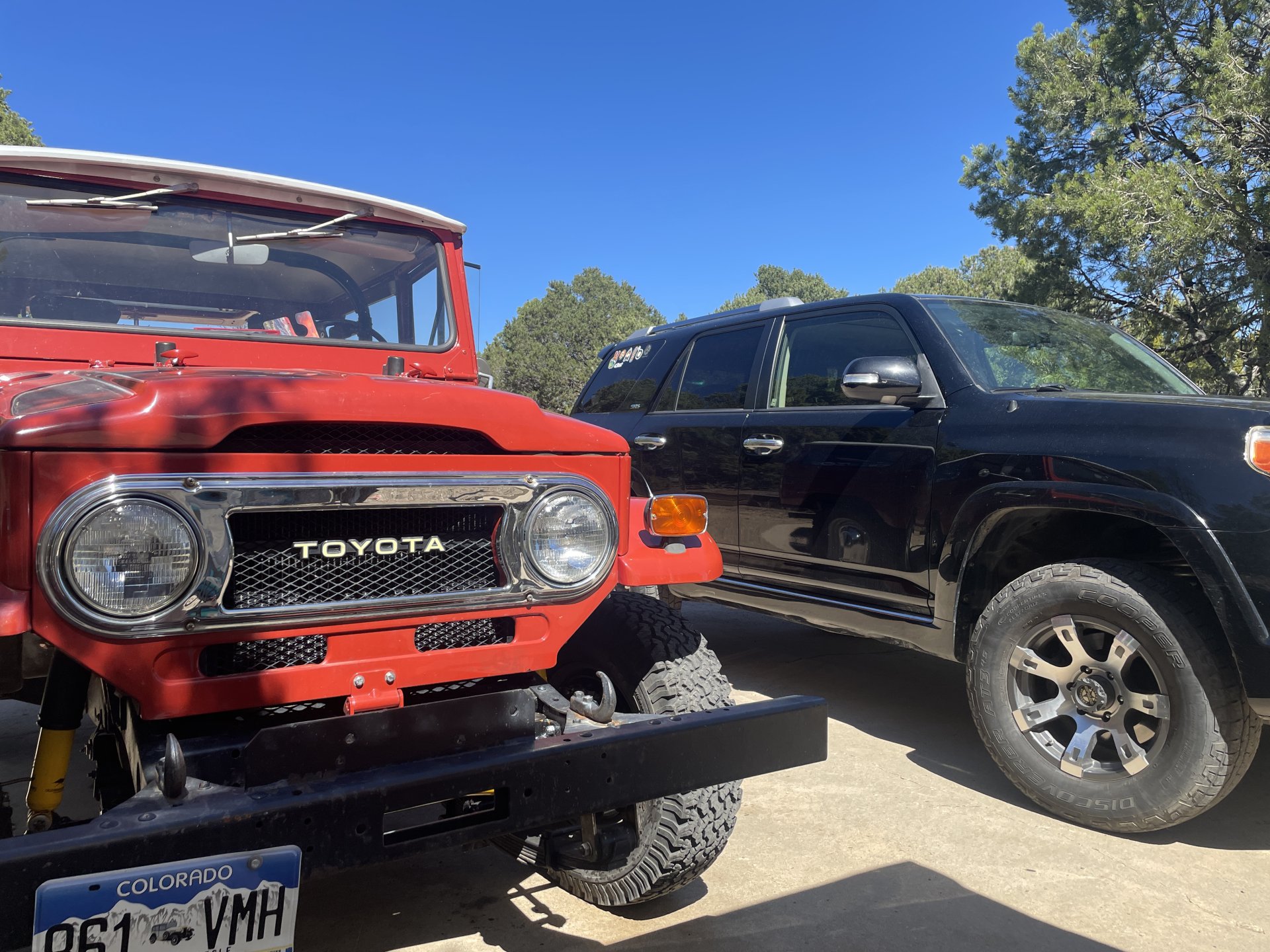 Wow. Should not have waited so long

I still have to shim my spring hole at some point... side project. See prior posts

I drove my rig into town for some errands and i thoroughly enjoyed it!! I've had this thing a while and every moment has always been preparing to stop... scan and plan ahead for emergency bail out direction, pump and press, downshift like a Mother, pump and stand on the pedal...

I can feel the REARS DRUMS engage well before the FRONTS DISCS. Then they come on progressively. It takes nothing to stop this thing now. And i don't even have to think about it!!

I re installed steering linkages... and it seems to be steering really good.
Few things: With relay rod OUT, i basically set my tie rod/ tires toe in... Then put my pitman arm in the ctr position ... Then adjusted the RELAY ROD between them until it fit with both. Could find ZERO info on this anywhere... fsm just gives lengths which did not work for me. Ball center is hard to see on pitman conxn.
My tie rod needed to be a bit longer than fsm spec to get wheels in ballpark.
My relay rod needed to be MUCH longer to match up tie and pitman rod at the center arm.
I had to reuse original cone part in ctr arm due to me stripping it trying to get arm on...
#2. I did not have good parallel square on my string. So my measurements were all over the place...
#3. I had my front end up in the air the whole time until i spoke with a Toyota guy... put it down and set the front wheels on double cardboard so i could turn them weighted. Worked out as long as i measured it on the ground.

My steering wheel is almost perfectly straight, truck mostly holds line until i hit ruts but i still have too much of play... now is a few inches while was a quarter turn before. Only thing left is steering gearbox/column 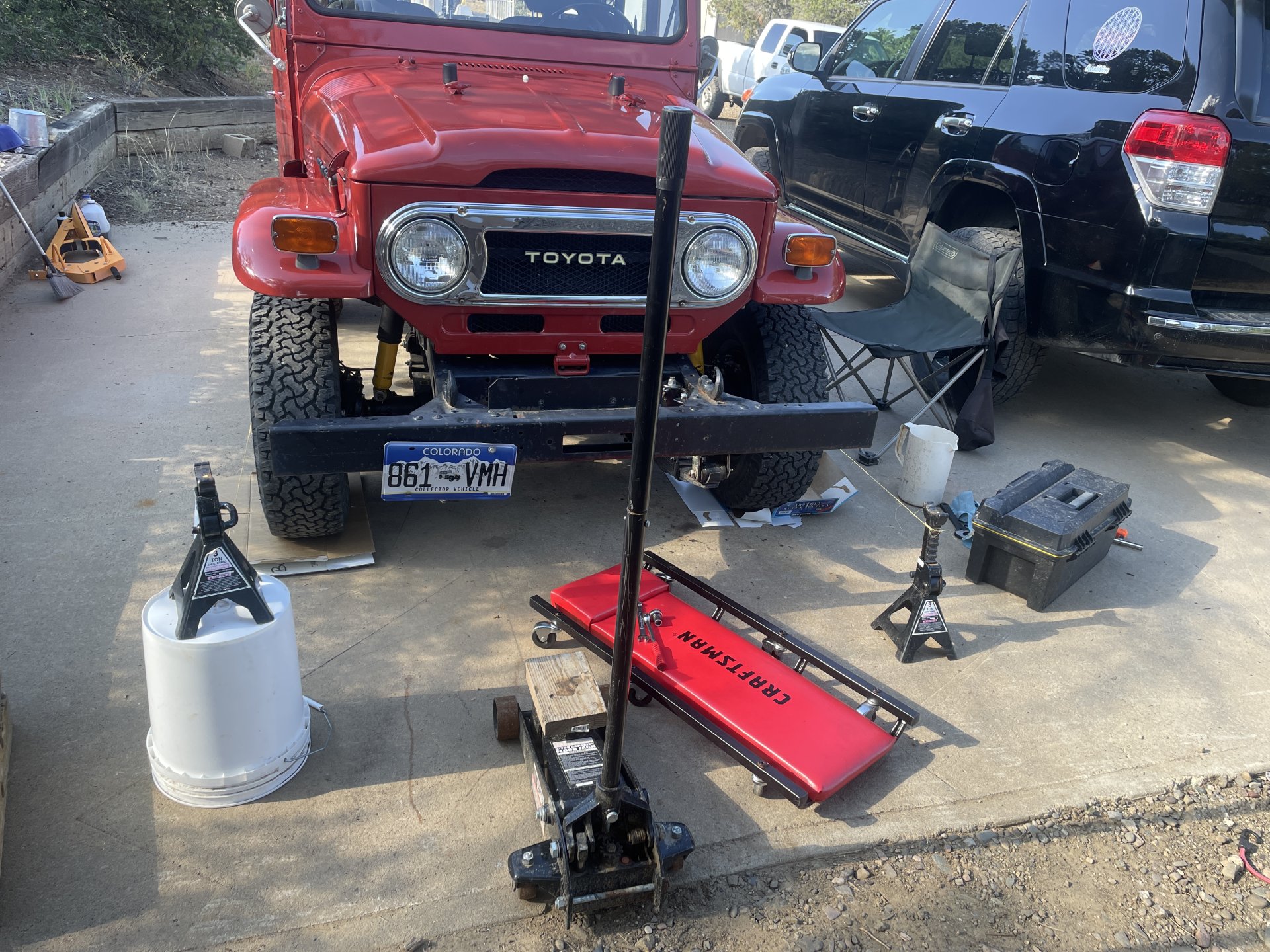 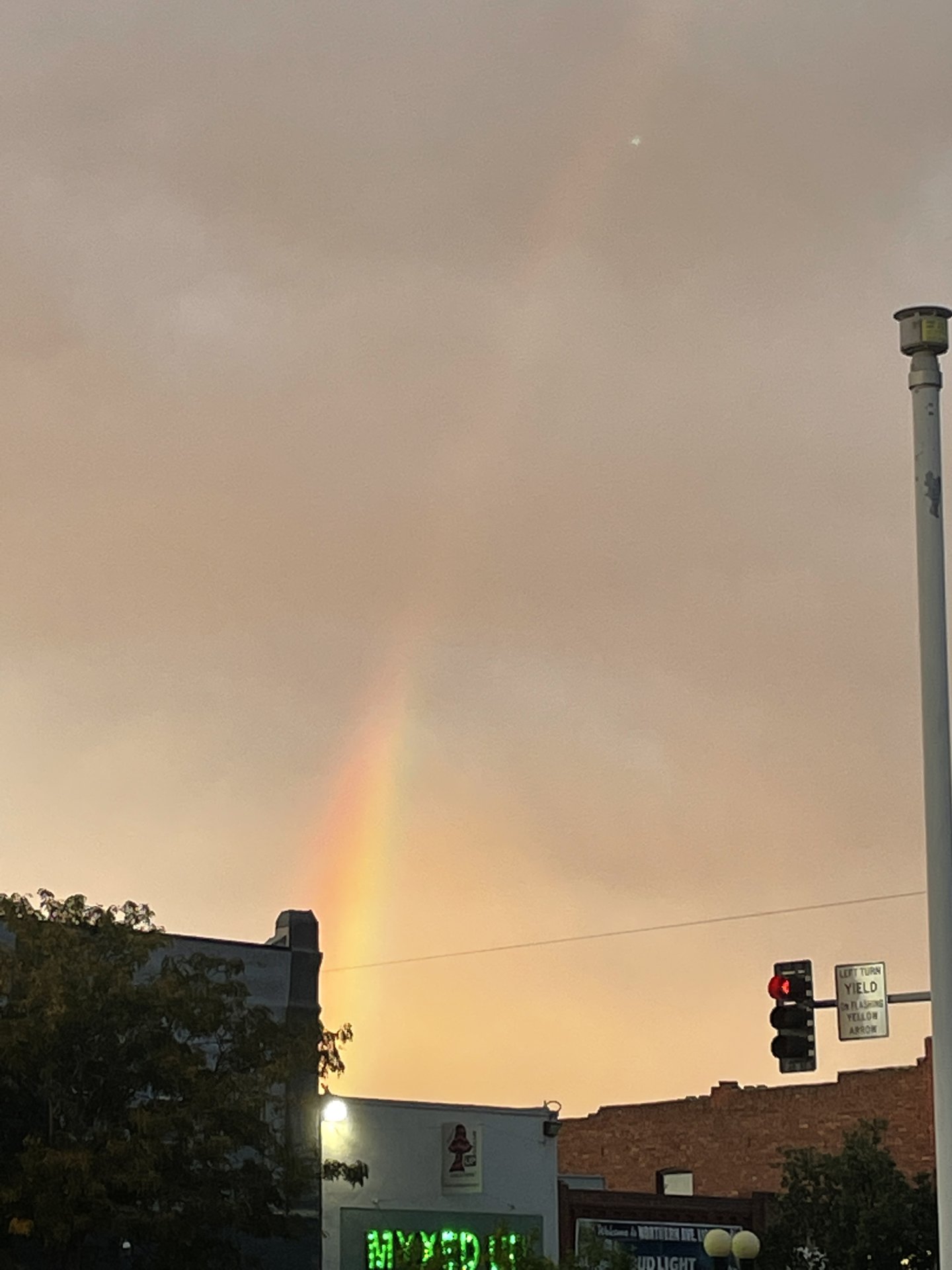 rkymtnflyfisher said:
FYI, Cruiser Outfitters is an outstanding source for most of what you need.
Click to expand...

I corrected my posts... Got most of my stuff from Cruiser Otfitters in Utah. NOT jtoutfitters. Damn autocorrect on phone.
You must log in or register to reply here.