I have just completed an 8 year restoration of my beloved 1988 FJ62 “Lola”. First and foremost if you ever see her tooling around the Idaho trails and towns show some love and honk, wave or flag us down. She loves making new friends!

Life for Lola began on December 25th 1987 when she rolled off the factory floor and was shipped to California. She was purchased by a schoolteacher in Mountain Home Idaho and almost immediately she was put to the test by driving cross-country to Florida. Thus, her adventuring career began. 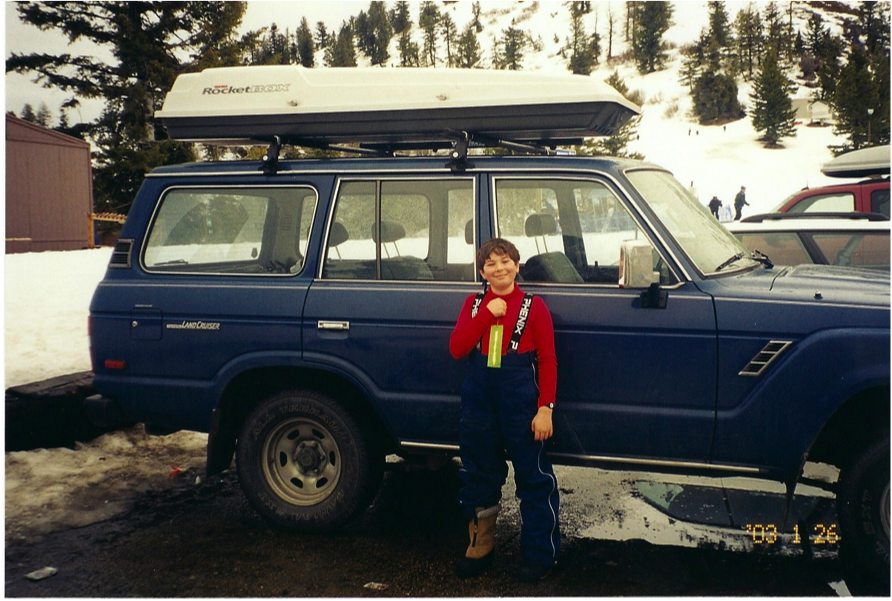 Photo Above: Young me with Lola at Bogus Basin Ski Resort

In 1998, many adventures later, Lola started her second life with the Drake Family. We purchased her the same day she was traded in and with approximately 90k miles on the odometer. My aunt happened to work with the previous owner and she was able to give us Lolas complete service history, shop manuals, a few spare parts, and even the original dealership-added bra. Oooh-La-La! Our family used her as a daily driver and adventure vehicle. As before, though thick and thin, Lola persevered and chugged right along. In the rough Idaho winters Lola served as our ski-shuttle and took us up Bogus Basin road to the resort at the top. She was not the fastest up the ice covered road but many would pull over and wait for her to lead the “pack” to the peak. She never slipped or faltered in her ascent. 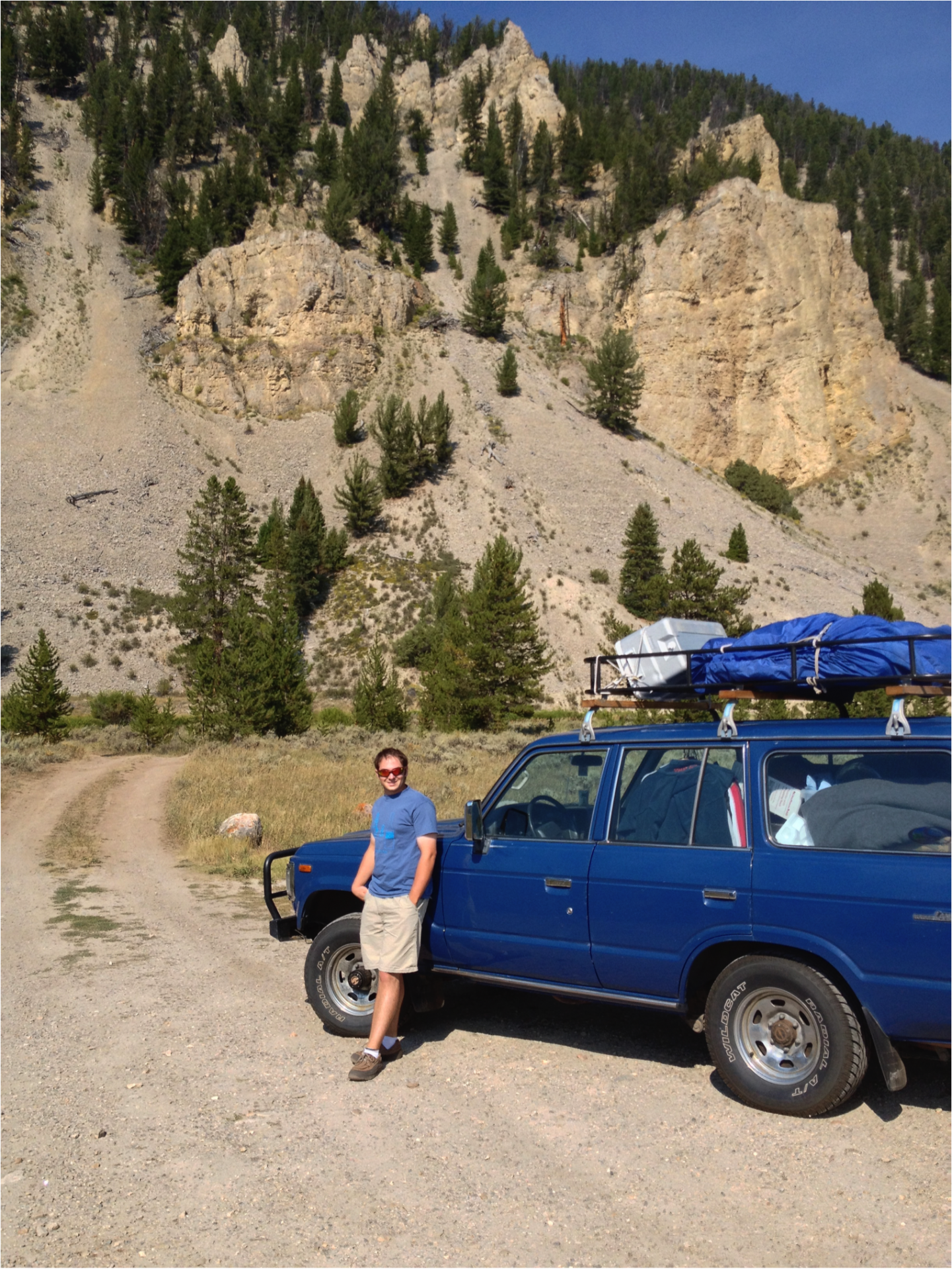 In 2008, I purchased her as my first vehicle from my parents for $2,000, she had a few more miles at 180k but still chugged right along without complaint. I drove her throughout high school, and into college while I was at South Dakota School of Mines in Rapid City. I took her on numerous wilderness expeditions during this period. She served as a rescue vehicle in several occasions including Storm Atlas in October 2013, and a brush fire in the foothills. Every year she and I would cross from Idaho to South Dakota and back again. Each time would be a different route and each time she performed admirably. Once in Yellowstone, a park ranger was turning away everyone who didn’t have chains. A bit worried, I pulled to the gate and chatted with her. After seeing what I was driving and telling me about her 80-series, she waved me on through telling me to put her in “Low” and lock the hubs. Having safely made it to the lodge, a fellow driver waved me over telling me how impressed he was with “that old rig”.

In the spring of 2016 she developed a radiator leak and almost overheated. I called her Mechanic since 1995; Boise Foreign Car Service, to assist and the owner walked me through a band-aid solution. I graduated that May and limped her over the Big-Horn mountain range and back to Boise to be repaired. She still resides in town and has been retired to weekend Ice-Cream duty.

I began Lola’s restoration by collecting parts and money for 8 years… yeah… I know, a bit crazy right?

In 2018 I began her restoration by having Boise Foreign Car Service do a thorough and intensive month long refinish of her mechanical and electrical systems. Sensors were replaced, bearings were repacked, all the seals were replaced. Essentially anything cracked or worn out was replaced. They also upgraded the stock suspension to an Old Man Emu kit from Australia. Her engine still had factory compression so no rebuild was necessary.

In September of the same year Lola was sent to Boise's Body and Paint Center to be repainted. The shop utilized the help of a LandCruiser aficionado; Jarrad Coleman for disassembly and reassembly.

Throughout the restoration process I encountered several challenges to completing this restoration. Lola was repainted in two-stage Toyota Factory Royal Blue. The interior was upgraded to include, sound deadener, new rear speakers, stain resistant seats, and certified seatbelts. Everything has been done with originality and functionality in mind. 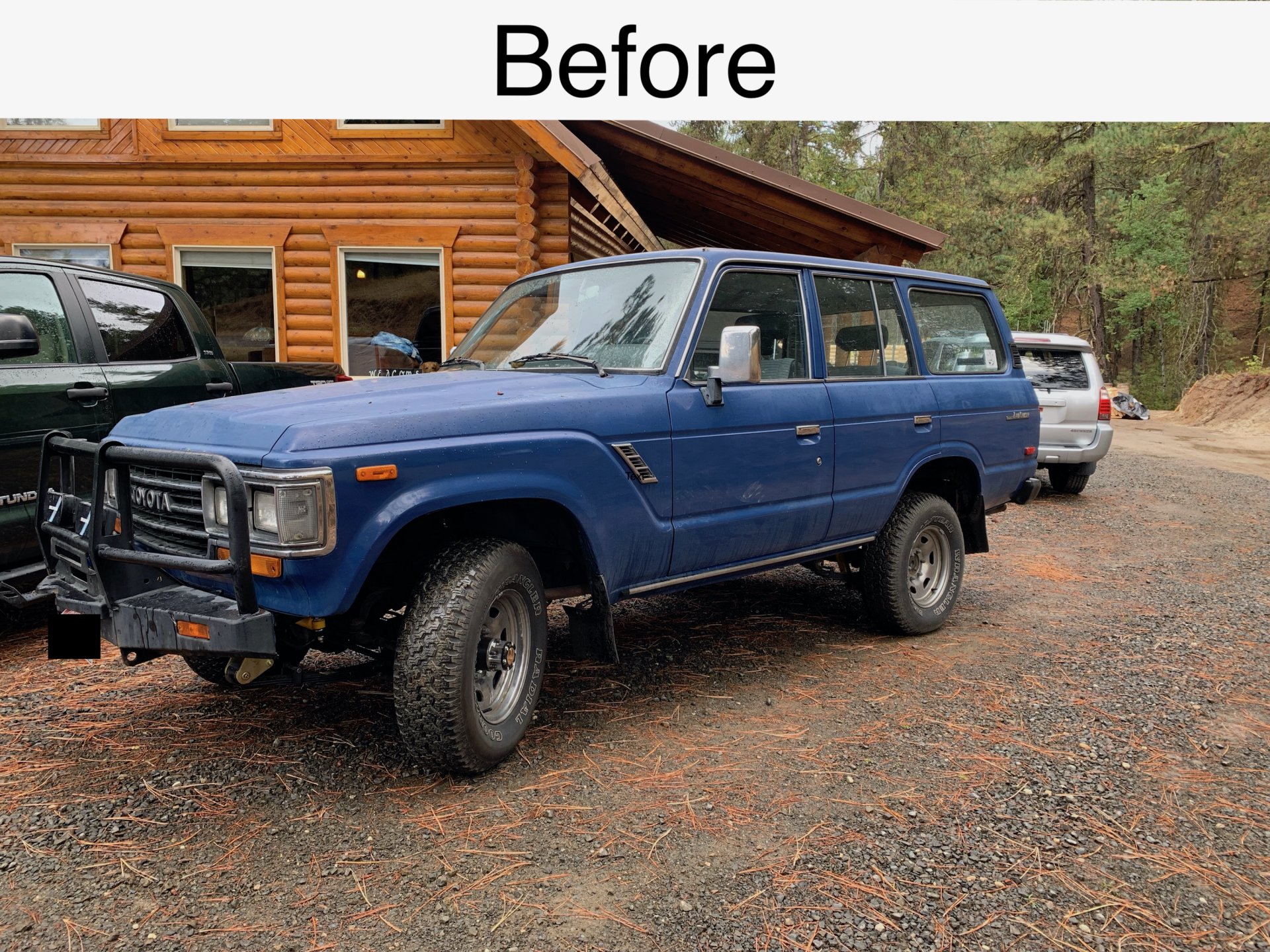 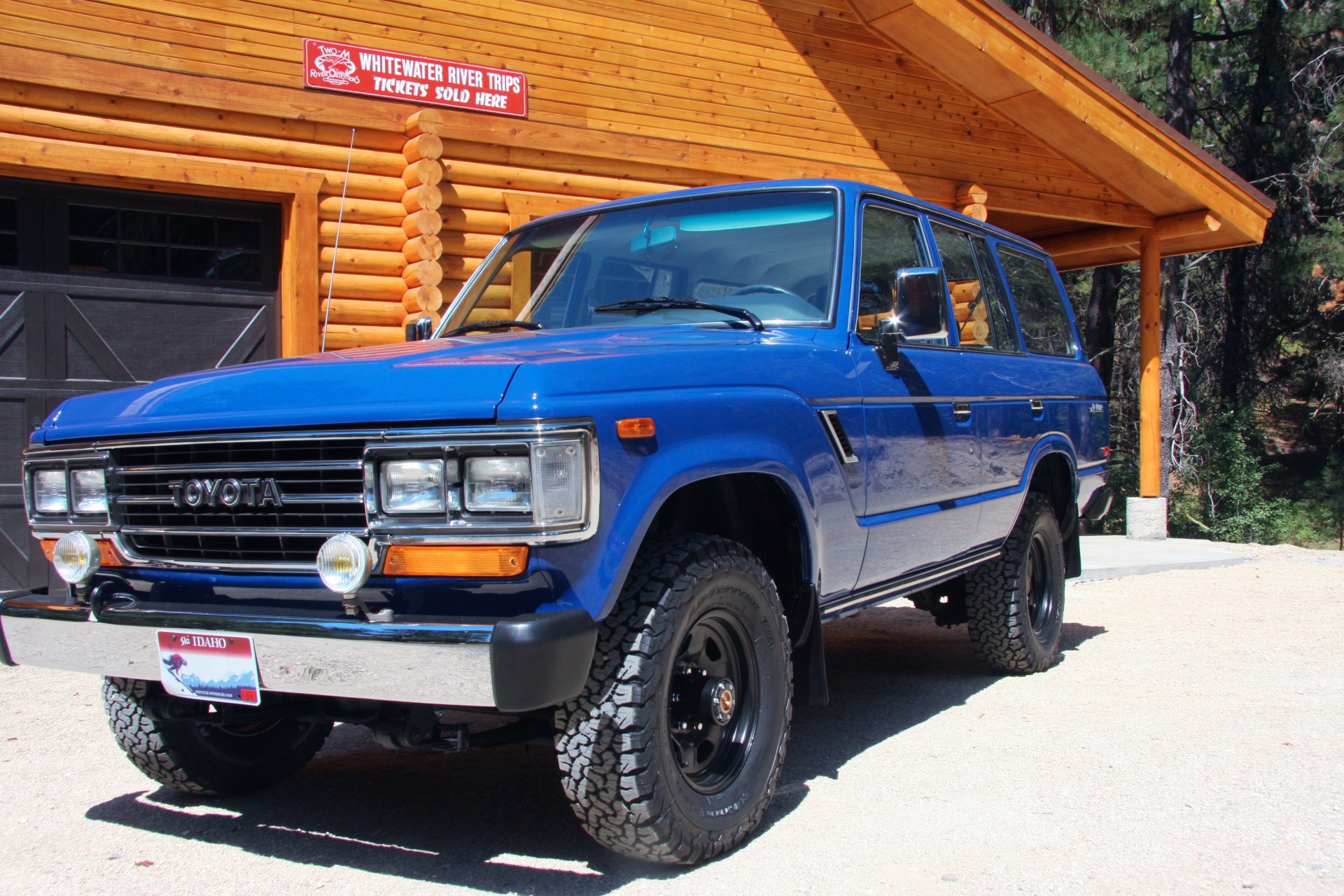 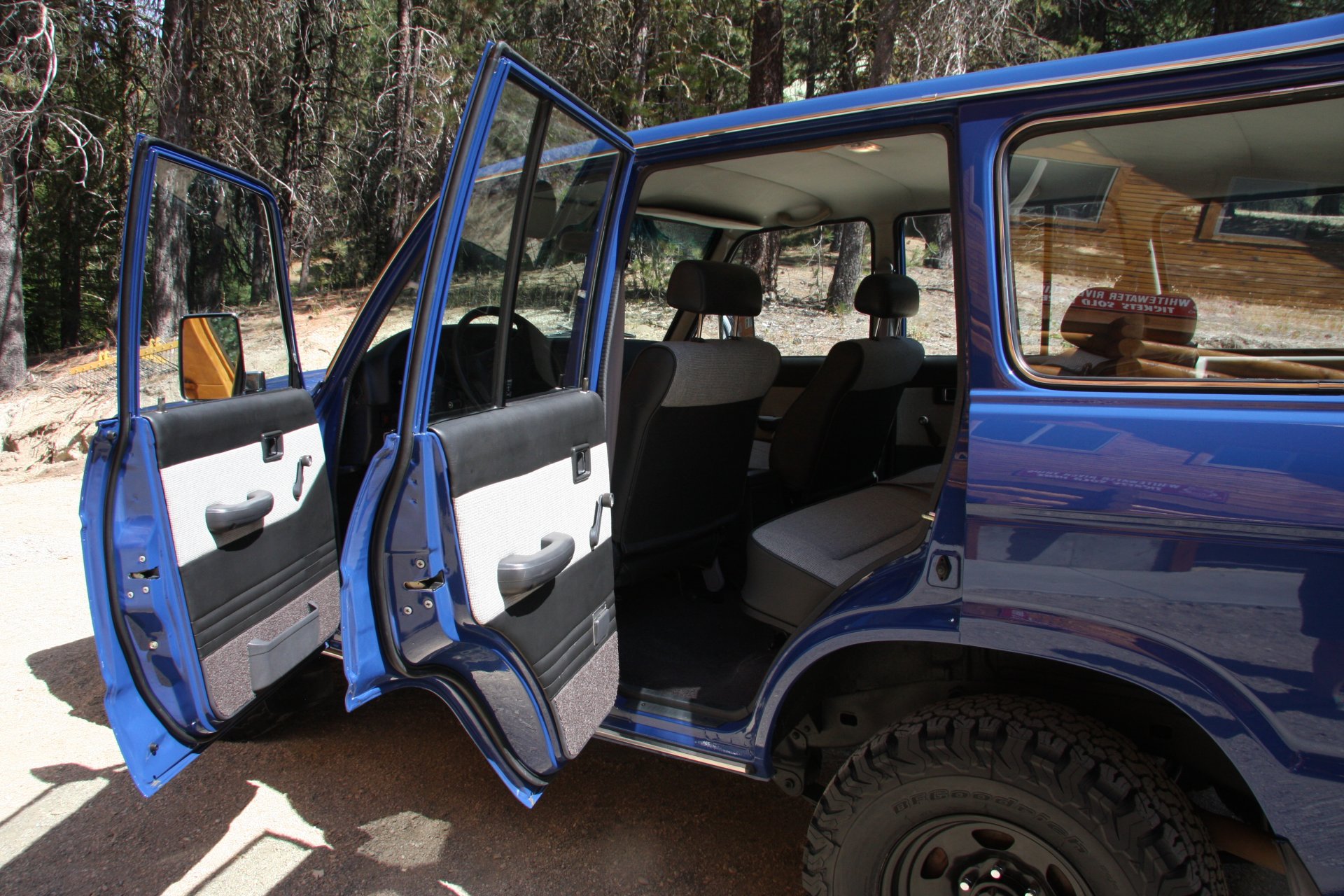 I would like to take a moment and thank all the following people for their great support during the project; Boise Foreign Car Service, Cruiser Corp, Trail Tailor, the Body and Paint Center, Chip Knight, the Facebook TLCA community, and the IH8MUD community. Without these people Lola’s Restoration would not have been possible.

Please feel free to ask any questions, I can describe the restoration in more detail or give you local resources if your in Boise ID. Also, if you need help finding parts I still have several resources.

What a great thread and congratulations. That’s an awesome story.

Great story and photos. You realize that 50% of the people here will ask 'what happened to the old-style ARB front bumper, and can I buy it?;

SteveH said:
Great story and photos. You realize that 50% of the people here will ask 'what happened to the old-style ARB front bumper, and can I buy it?;
Click to expand...


Funny because I was about to ask.....what happened to the old-style ARB front bumper, can I buy it?
You must log in or register to reply here.