This last weekend I finally got the time to rebuild the rear diff from my 62. This was my first time rebuilding a diff so I took my time and made sure I was prepared for anything I could think of before starting. I was concerned over an occasional growling/rumbling noise coming from my rear end (laugh it up), and since the diff had ~320K miles and 33 years on it I decided to go ahead and refresh it. I recorded my progress and notes to help any other first time folks tackle differential jobs in hopes that it can go a little smoother that it otherwise would.

A few things needed for the job were the obvious and most critical Toyota Chassis & Body FSM, a holder for the differential (I bought one that's designed for bench mount, but decided I'd rather modify my light duty engine stand to support it. I have pics of what I did farther down here), an inch-lb indicator style torque wrench for checking preload, a dial indicator with adjustable magnetic base, a punch for marking components to identify which side of the carrier and housing they go to (@OTRAMM discusses this in his video guide for the 9.5" differential, which was an invaluable resource), access to at least a 20 ton press (which mine honestly strained a bit) to get the original pinion bearing off and then the new one on, a bearing spreader that's at least 4 3/8" (Harbor Freight seems a Maddox brand one that works well) for removing the large bearing, and a set of bearing pullers for removing the carrier bearings. I already have the set of two bearing spreaders/pullers from Harbor Freight that work surprisingly well. You'll also need a 30mm socket for the pinion nut, a way to brace the companion flange when removing and installing the nut, and to either make or buy a carrier adjuster tool.

Other things that will help are transmission jack so you don't have to bench press an 80lb hunk of iron once you break it free of the axle, a drill (or better yet angle grinder) with a wire wheel to clean the old gasket material away from the 3rd member and the axle housing, 600 grit or higher wet/dry sandpaper, a couple cans of Brakleen or carb cleaner to rinse off marking compound if you have to check gear mesh more than a couple times, brass drifts for the pinion bearing races, and a micrometer for verifying thickness of shims and thrust washers.

As far as parts go I ordered a solid pinion spacer (which I detailed my unpleasant surprise in this thread: Solid pinion spacer - Someone screwed up). Just be sure to verify the length of the spacer before you start in on this job. I also ordered a differential overhaul kit from @cruiseroutfit that came with nearly every part needed. The box is labeled Sierra Gear and has bearings w/ races (the pinion bearings are Koyo and the carrier bearings are Timken, but Koyo can be substituted on request), silicon sealer, Loctite 263, a small tube of marking grease and an acid brush, an assortment of shims, and a pinion nut. CAVEAT: Be sure to specify your month/year of manufacture if you order from Cruiser Outfitters, as the one that came in the Sierra kit was too small for my pinion. I didn't think to check what actual size the pinion and nut threads were, but luckily I was able to reuse my original nut as the staked portion was in a different location when the preload was dialed in. When I mentioned it to Kurt, he explained that mine was likely made close to the cutoff between the 60 series and 62 series, so while I still have the 4:11 gears my pinion required the larger nut.

I really didn't want to drill holes in my work bench to mount the diff holder that I got, so I cut up the mounting plate from my engine stand and welded the diff holder to it. It gave me an excuse to use up some of the junk flux core I still had sitting around on welds that I wouldn't care how they looked (and believe me, they're embarassingly ugly, but strong with good penetration). This put the diff at the perfect height for me to work around too, so definitely worth it. Maybe one day in the future if I'm feeling froggy I'll clean it up and make it pretty. 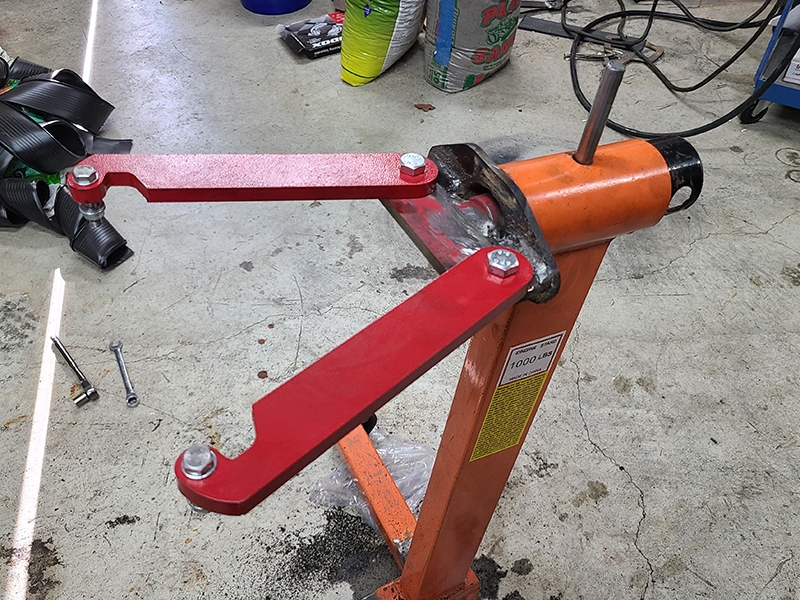 Removing the diff was surprisingly easy. Once the rear wheels and axle shafts were removed, I removed the rear driveshaft, supported the diff with my tranny jack, unbolted it and gave it a couple thumps with a 4lb dead blow hammer. It popped right off and I was able to lower the jack and easily roll it out from under my truck. 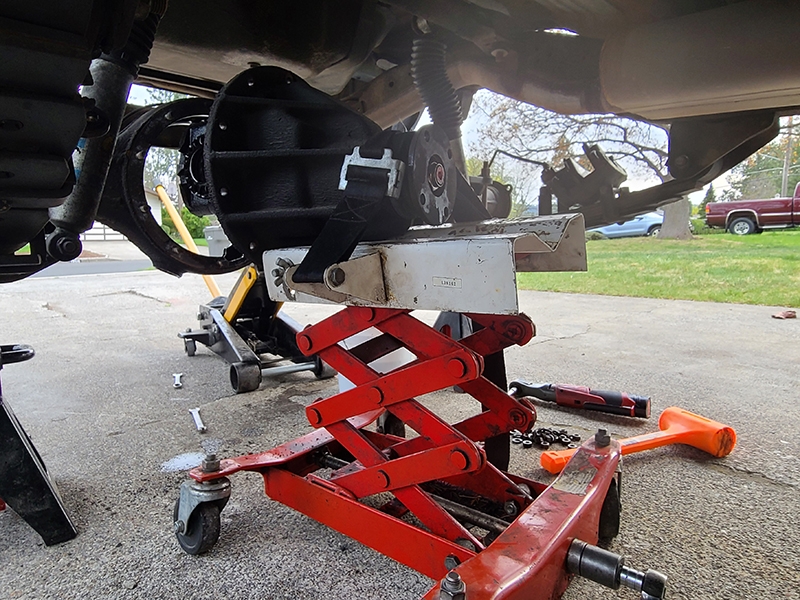 Before I completely disassambled it, I checked backlash of both the ring gear and the side gears. The ring gear was at 0.009" backlash, so not bad at all but still just barely out of limits (FSM calls for 0.005 to 0.009" backlash and in a previous thread I guessed by eyeballing that mine was at about .010-0.015), and the side gears were both at 0.008" (FSM calls for the same backlash as the ring gear), so just at the maximum. The pinion (as expected) was where it was really showing its age though. Once I removed the carrier assembly I checked the pinion bearing preload and it was only at about 3 in-lbs. FSM calls for 7.8 - 13.3 in-lbs on used bearings. The factory original crush sleeve lasted 33 years and 320K miles, so I guess that's pretty good! I did, however, opt to forego the crush sleeve in favor of a solid pinion spacer. Picture of the old crush sleeve still in place in case anyone's curious: 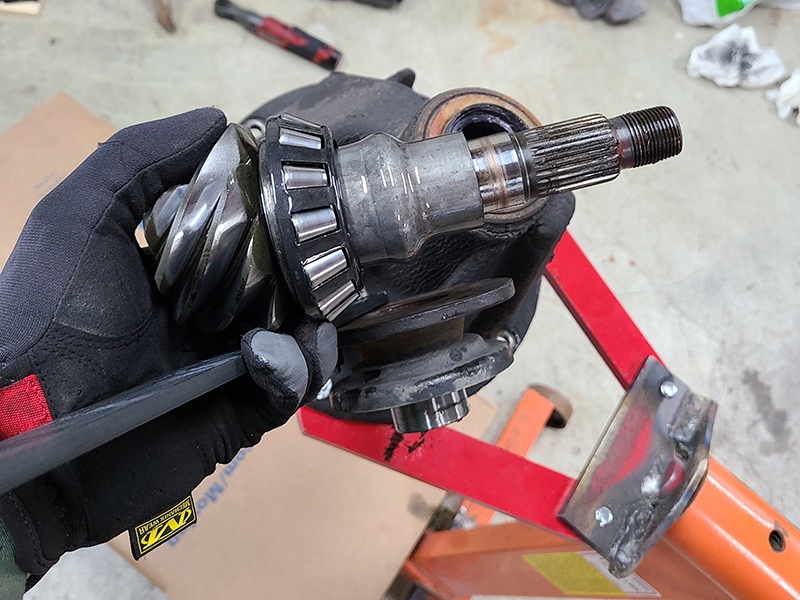 Something I noticed once everything apart was that the thrust washers on the side and spider gears were polished from wear, but showed no signs of actually losing material over their lifetime. I reused the spider gear washers, but since I had ordered an assortment of different thickness side gear washers, I was able to replace my 1.9mm washers with 2.0mm washers that took the backlash down to 0.004". 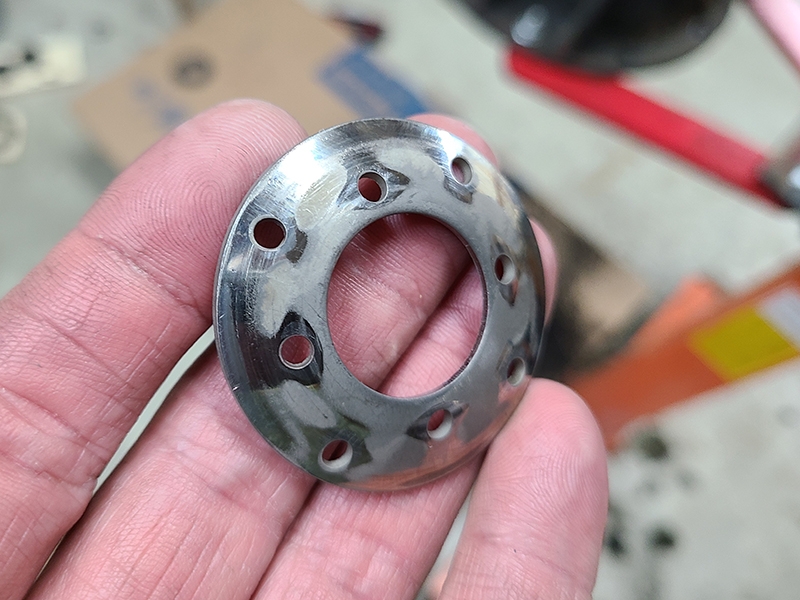 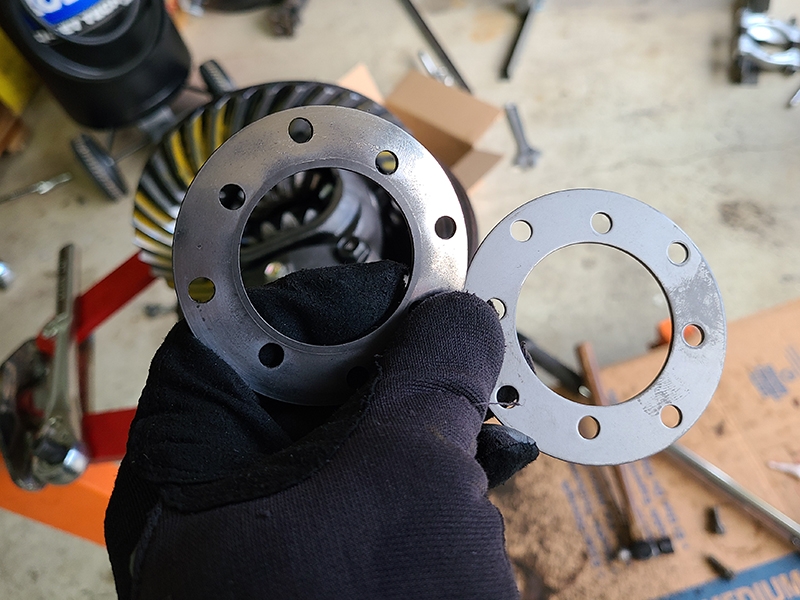 Here's where I ran into a little trouble. When removing the side gears the left side slipped right out, but the right side needed a few taps with a drift from the outside to get it out. A close look at it revealed why: 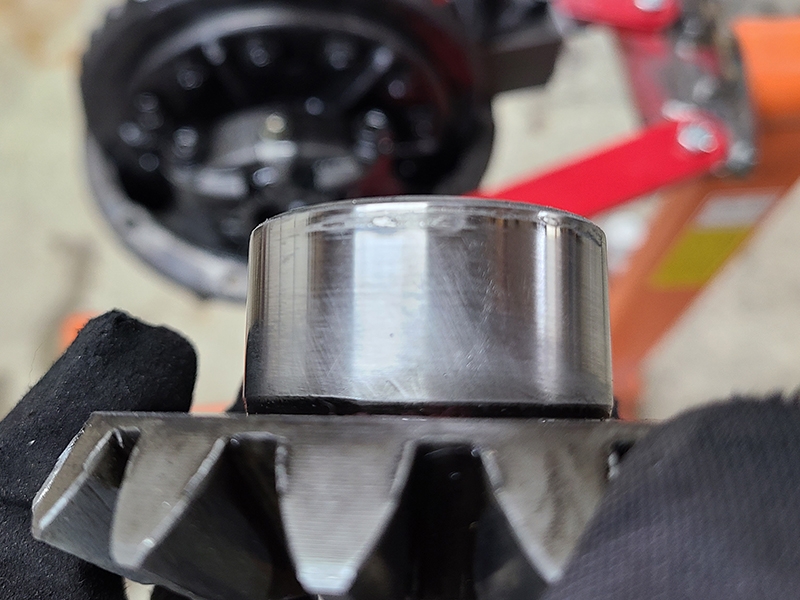 No clue how this damage got there, but I could easily catch a fingernail on the raised bumps. Some wet 600 grit sandpaper and almost an hour solved that issue beautifully. 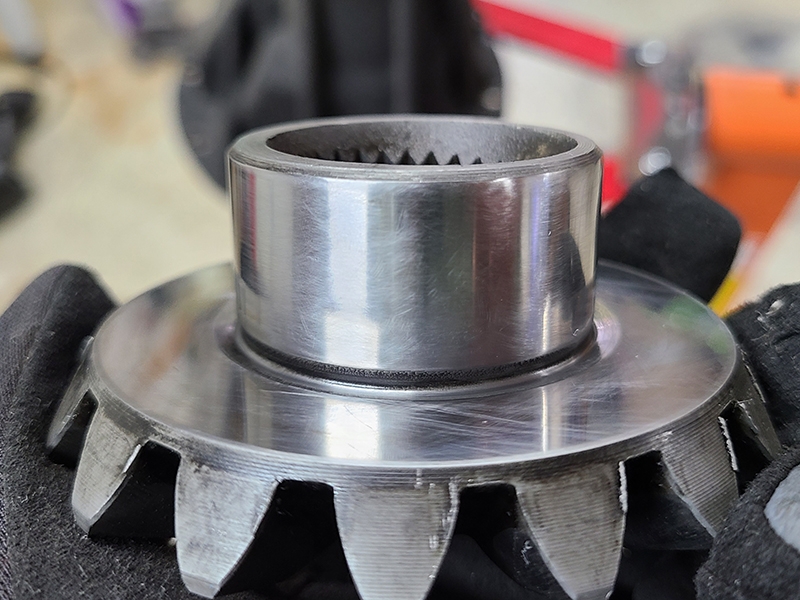 I also noticed a nice deep gouge in the seat for the oil seal. It was obvious that it was very old (last time this diff had been apart was during assembly at the factory) given its appearance and the fact that my oil seal puller couldn't come close to reaching the sides. The metal was also raised and made nice sharp ridges on either side of it, so I smoothed that down as well. 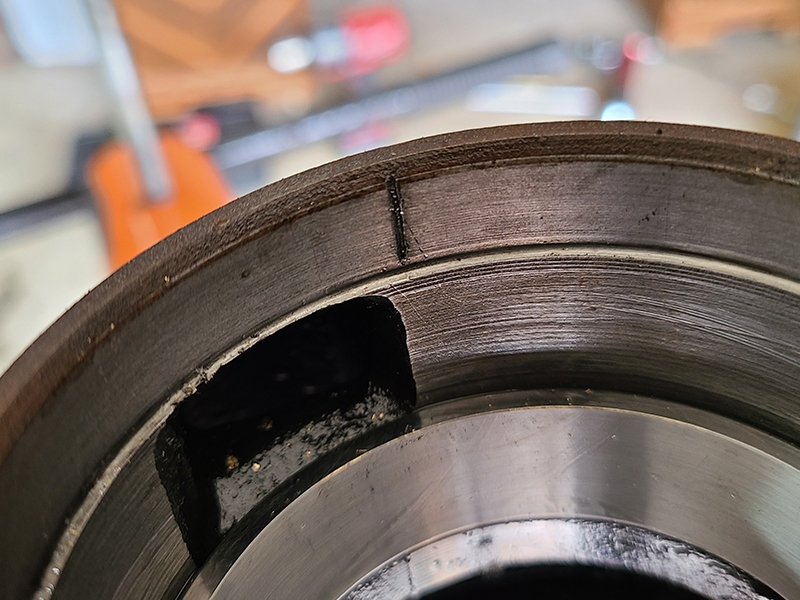 The valley of it is still there, but very minor, and as least now I knew it wouldn't damage a new seal being driven in. I followed @OTRAMM's tip in his YouTube video and put a very thin layer of silicon around the outer diameter before driving it in as I was doing final assembly. 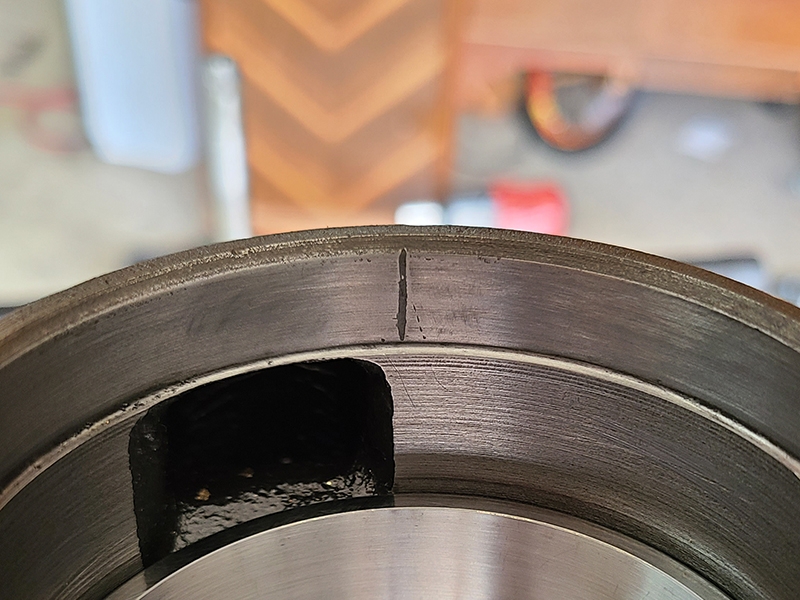 Rebuilding a diff, especially when using a solid pinion spacer (as I was warned going in so I took it to heart and counted on a lot of tedium) involves a lot of assembly, adjusting backlash and checking gear mesh, disassembly, adding or subtracting shims where needed (sometimes involving removal and reinstallation of the rear pinion bearing). Eventually I got it all dialed in. 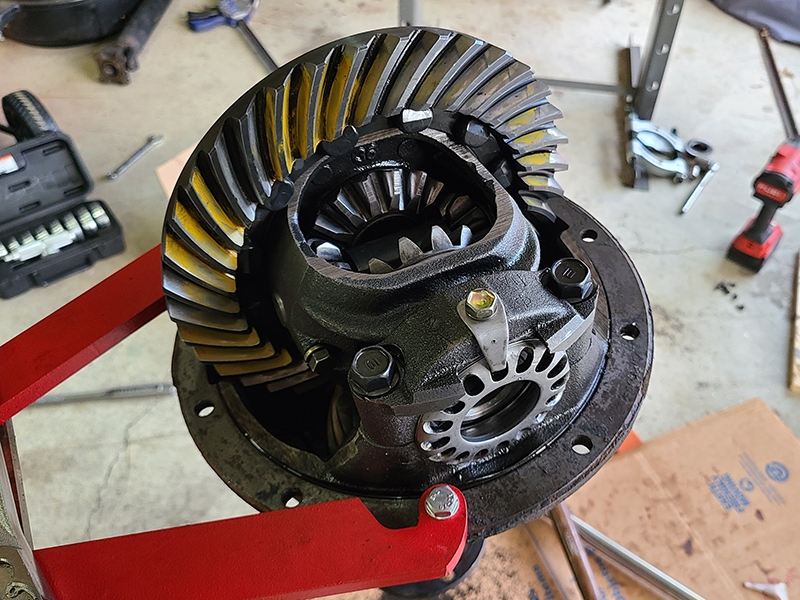 Gear mesh ended up looking surprisingly good (just a hair deeper on the ring gear than I would've liked, but given the wear of both the ring and pinion, it was the only way to avoid too much backlash so I took what I could get). As it was I ended up with 0.0075" of ring gear backlash. On the upper end of the limits in the FSM but still an improvement over where I started. After my aggravation with the solid spacer and having to solve that I got the pinion bearing preload (new bearings) dialed in to 23-24 in-lbs without the oil seal. Just a hair over the FSM's prescribed maximum of 22.6 in-lbs, but not enough that I'm worried at all. And yes, it is true, gear mesh is difficult to read on used gears. Yikes I gave myself a headache trying to read it the several times I did. 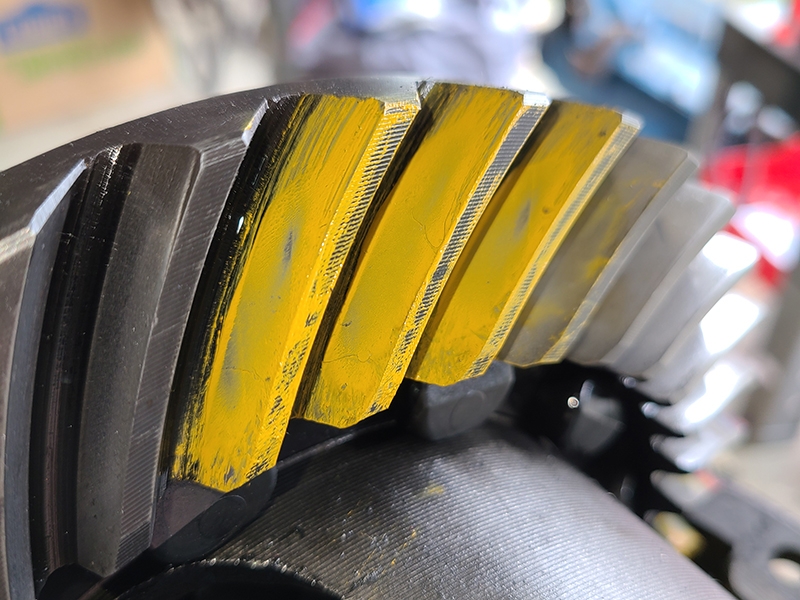 I didn't take any pictures of this, but before reinstalling the diff I removed the studs from the axle housing, soaked the old paper gasket material with CRC contact cleaner (breaks down the adhesives in the gasket material) and after removing the big chunks went to town on the surface with a 4.5" wire wheel on my angle grinder. After that I chased out the threads (I can NOT stress enough how important it is to have a rethreading kit to use instead of taps to clean and realign threads. It is the single most used tool kit in my shop) and reinstalled the studs with threadlocker. The diff was reinstalled with a new cork gasket, ensuring proper torque of the nuts so as not to press down too hard on the gasket. While this was all being done I had the rear cover blasted and powder coated by a buddy of mine who lives not far from me. Some shiny new hardware made it all pretty. 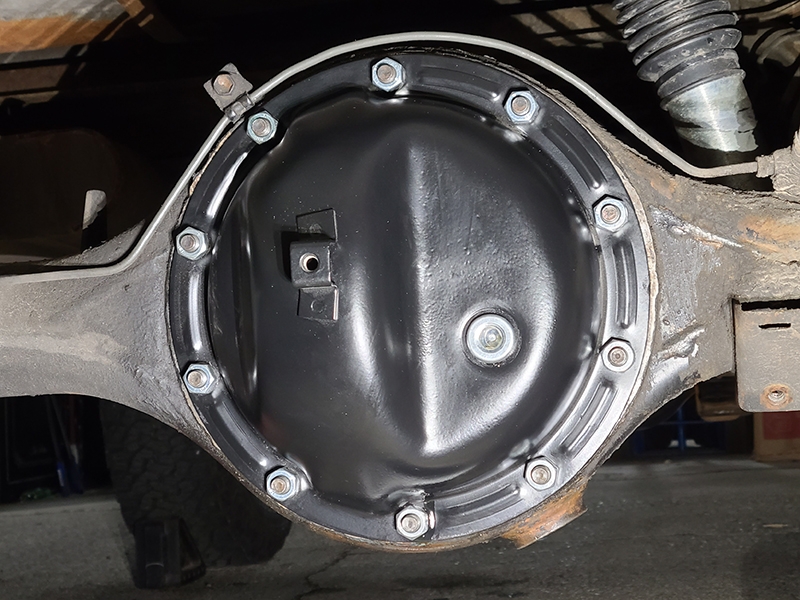 The noise I had been chasing is mostly gone now. What remains is just exhaust that occasionally rattles against my upper shock mount crossmember. The differential noise is gone, and I should be good for another 30+ years now. Or at least until I finally get my hands on an FZJ80 rear end.....

Excellent write up! Thanks for sharing this.

llewdis said:
Excellent write up! Thanks for sharing this.
Click to expand...

Thanks. This by no means makes me any kind of expert on differential rebuilds, but hopefully the things I learned will help make the first time easier for anyone else who attempts it.

Would love to see some of the more experienced and seasoned professionals add to this with advice as well. Would love to expand on what I've learned so I have even more info to go on for next time I tear into a diff.
You must log in or register to reply here.