G'day All,
I'm wondering which end of the vehicle gets which length springs? I'm going to install some tomorrow and would appreciate getting it right the first time. The longer springs have 8 leaves and the shorter have 7.
Thanks!
Scott
Last edited: Jul 1, 2011
G

I really need some advice on which spring goes on which end. I assume the springs with more leaves go on the back and the lighter springs on the front? There is 1" difference in spring length.
Thanks in advance.

Are these stock springs? I don't remembered exactly but for both stock and OME springs, the springs with more leaves go to the front ( the front is heavier with the engine).
'75 FJ40 mostly stock....yeah right!

Stock or lifted replacement springs, the longer packs with the spring pin not centered (like, 40%/60%) are installed in the rear, with the "60%" side behind the axle. Clear as MUD?

Thanks guys! Looks like the heavier springs are for the rear then. I'll check the pin location too. Cheers!
Sorry but it's hard to check as the car and spring are sitting down at a friends place.
G

Right, the rear springs are the longer ones and they have fewer leaves than the shorter front springs. I was measuring eye-to-eye instead of along the curve of the springs and got the lengths mixed up.

Stock or lifted replacement springs, the longer packs with the spring pin not centered (like, 40%/60%) are installed in the rear, with the "60%" side behind the axle. Clear as MUD?


Mark...
There is no gain in arguing with a poo flinging monkey. While his gibbering and raucous cries of victory may seem obnoxious in your ears as you walk away, he will soon be quietly sitting behind his bars again and licking his own feces off his fingers as you carry on with your day.

Say that "It looks cool" to justify a mechanical modification and I quit listening.

Everyone's an expert on the Net
G

Mark, my front and rear 1977 springs are a different length measured along the curve of the spring. They are similar eye-to-eye in a straight line, but due to the different curves on each spring they measure different when the length of the parabola is accounted for (i.e. you measure along the curve of the spring). Therefore if each was measured as a straight piece of steel (flattened) the rear is longer. Thanks for your info regarding which spring has the extra leaf - that is most helpful!

Due to a sagging rear and cruiser lean, I pulled all 4 spring packs off a couple of months back.
My springs were all the same length but 2 appeared shorter due to greater arc.
All had the same number of leaves.
I determined which is end is front / back by looking at the spring ends and comparing iit to a "virgin cruiser" spring setup.
The spring pack ends are different - on 1 end, the spring leaf "wraps around" and on the other end, the second from top spring ends but doesn't wrap around the shackle pin. (That's what I remember - my cruiser is now on a slow boat). The end that completely wraps around goes on the fixed hangers, - midship.
I put the pair with higher arc at the rear. The cruiser sat much better after this but had over 1" of front lean - lower on the D/S.
So, I removed the passenger side spring and separated the leaves. Then a craftsman flattened that spring pack around 1/2" with no weight.
Put it back together and it's almost perfect.
Hope this helps. 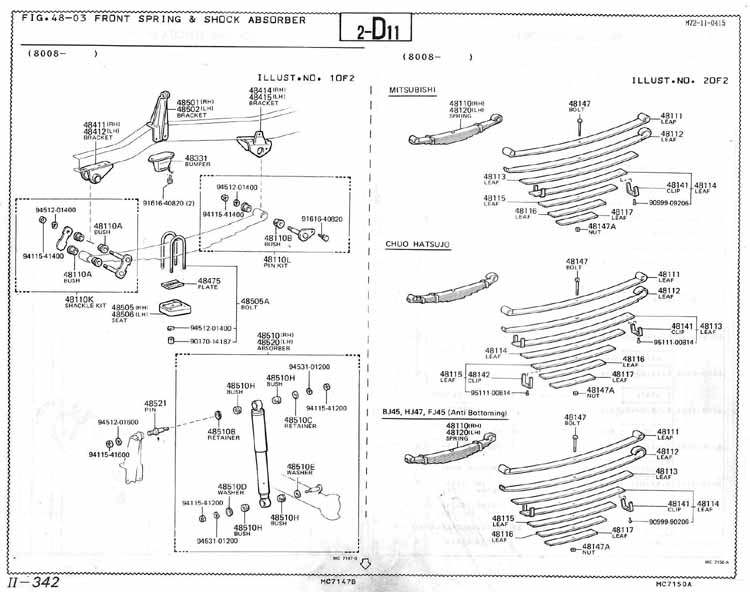 I'll be putting the springs on tomorrow, so I guess I'll find out!!
G

OK, no photos yet but the springs are in! The rear springs are the longer 7 leaf springs, with the slightly shorter, less arched 8 leaf springs in the front. The FJ is now sitting about 4" higher than it previously was on the front end which had sagged old springs. I reckon she'll sit down a little over the next weeks as the springs wear in.

It was an epic battle until late into the night to get the old springs out, with both of us working on the car suffering only minor injuries, it was a victorious outcome

Old thread but something I want to mention is the failure of anyone, including web sites, on measuring springs. The presumption being that you have original springs and that they are correct I guess. So everything says to measure along the arc for both length and position of the locating pin. I bought springs here in Ecuador for my 1970 FJ40. The springs are simply listed as Land Cruiser and it didn't matter which year. When installed there were two problems, the pin was in the wrong location shoving the rear driveshaft into the transfer case, and secondly, they were over arced which resulted in the rear shackle leaning slightly forward. The result was that a speed bump, at low speed could cause the shackle to rotate forward resulting in zero suspension. And a real pain to get back into position. Long story short, you could measure a spring along the curve and obtain a length and pin location and have a straight spring. The chord height is very important and the only way to know what it is would be via a manufacturers specification, since you don't know what has happened to the spring over time. I transferred the front springs to my "new" '79 model, but because of the aforementioned problem in the rear I kept the presumably stock rear springs which most definitely have a rearward rotation of the shackle. But, and this is important, the '70 rides much smoother than the '79 and I can only note two differences, the greater chord height of the spring, over arced, and oil shocks vs the gas over oil Monroes I put on the '79. The center to center dimension of the mounting points in conjunction with the chord height are major dimensions to know. Since the shackle will be rotated away from the fixed point, measuring along the arc is a must as well, but who knows how far the rotation is supposed to be and how that will be achieved?
'70 FJ40
'79 FJ40
You must log in or register to reply here.