So I have wanted a LC since I was a senior in HS and I finally decided to buy one - Found one locally (Central PA) - paid 3k - very little rust considering the area.
So I know next to nothing about mechanics but I read a book recently (Shop Class for Soul Craft) that talked a lot about sweat equity in today's economy and the euphoria involved in fixing things.. I have had this thing for 2 days and fixed the dashboard lights (with some help from this board) and know what the author was talking about!!

So a few things I have some questions on -
1 - Speedo and Odometer don't work - I was underneath the truck today and the cable is attached to transfer wire - behind the dash the the cable wont clip in - but i drove the rig in a parking lot with the dash apart to see if the wire would spin - it did not .. Thoughts ?
2- Passenger power window does not work - just buy a wire harness online - since there wasn't one on the door - hoping that works - all the other power windows work.
3- There are three things I don't know what they are - one is a switch on the center console ? the other two are posted below . 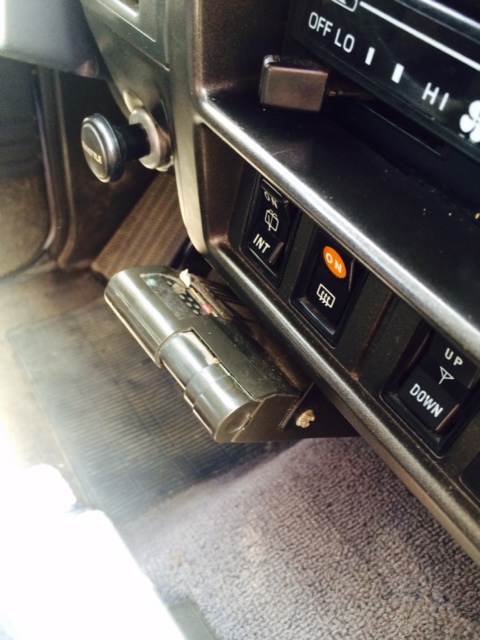 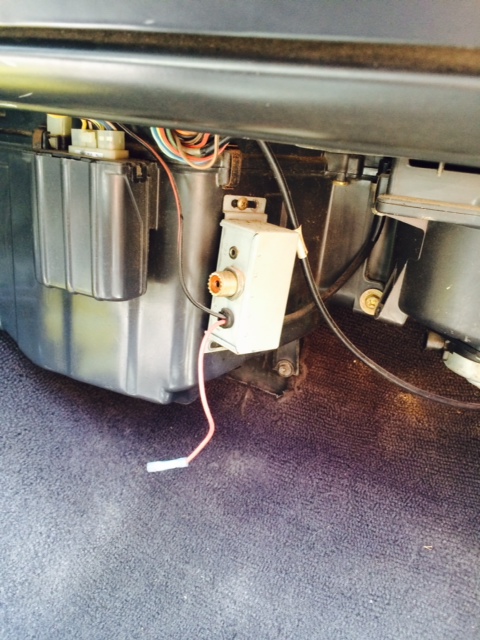 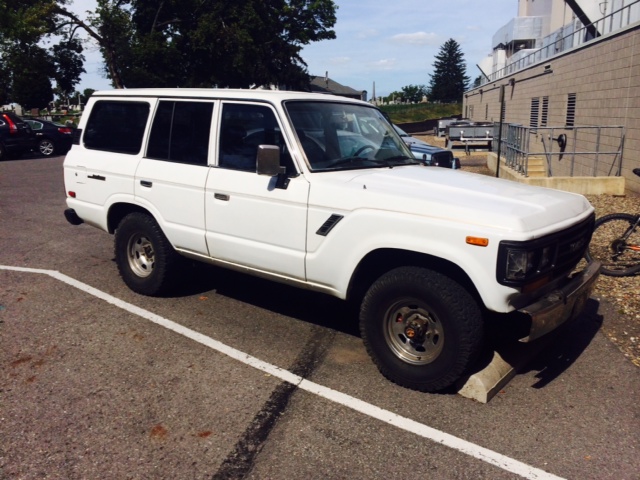 I am really looking forward to this journey - Thanks for letting me be a part of it!

And 'welcome to the party pal!' (John McClane of Die Hard fame) - it gets better as you learn more

Hey dude, welcome! Youll get plenty of sweat equity with that bad boy! First pic is a digital trailer brake controller by the looks of it, for setting the level of braking given to a trailer with electric brakes, second one looks like maybe an external antenna jack for a radio or cb? Anyways, READ the stickys here and do searches. I have yet to have a problem with mine that hasnt had an easy cheap fix on this board. Your power window and speedo cable have cheap easy fixes listed, might want to find them! Anyways, have fun man!

As justacruiser said, read this forum. Search for specific topics, but be sure to read the "Best repairs under $50" thread."
Nice rig. More pics? What are going to use it for?

If the switch in the center console is the one I'm thinking of, its for the rear heater. Took me pulling the console out to figure that one haha.

Welcome aboard, captain...or is it Ishmael...

x2 on what BG_TX recommends...probably just need to get a new speedo gear at the transfercase.

..or cable could be stuck...to test, remove skid plate below tranny, remove speedo cable at the transfercase...try to spin the cable at low rpms (couple hundered rpms tops) with a drill or something while someone looks to see if the speedometer (if hooked up to the gauge) or cable end at the steering column is rotating too. If not, cable is stuck/bent....new cable. If it moves, try replacing the gear...

If you liked "Art Class as Soul Craft", you might like "Beyond the Mountain" by Steve House. Not nearly as idealistic and he still manages to reveal the way he goes about making decisions in the face of uncertainty. And he is pulling off some serious alpine style climbs on big peaks where traditionally only 'siege' style climbing is done...
I

The second pic is a
Cobra CB part. From this unit. 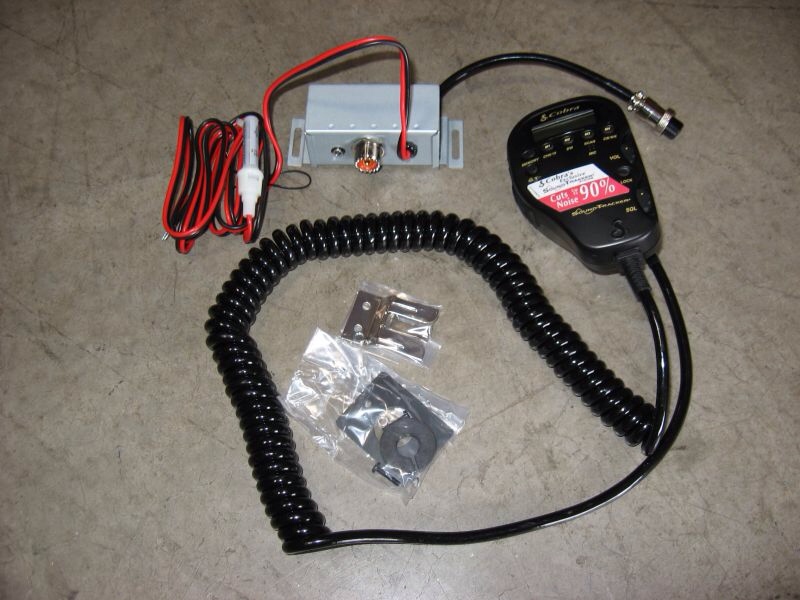 switches on center dash are rear window wipers, rear window defrost, and antennea motor, from left to right. yep, that is a trailer brake controller bellow those factory switches.
second pic is a CB radio antennea switch box/adapter thingamajig.
it could be that the speedo cable didn't spin because it had come out of its spur in the transfer case union, which can happen if it's not held captive by being hooked up right on the dash side...ore could be rust broke and need r+r(specter off road). as mentioned, before ordering parts, remove the speedo drive gear at the tcase and inspect for wear(search tcase rebuild threads for reference pics and pitfalls...)easy job, just do you homework. I suppose the prollem could be multiple and there could also be a speedo proper prollem, but not highly likely. congrats. now start saving for an H55. HTH

Thanks everybody for the info - I am going to remove both the CB radio part and the trailer brake controller tomorrow - as for the speedo cable i have to wait for my GF to get back in town so she can "help" me to see if the drill works on the cable - I feel bad its sort of like asking your wife to go to dinner with your mistress. I am sure it will end in a fight

Anyways thanks so much everybody - I can barely change a tire so I am sure you will see alot of me on here.

From what I understand, there were quite a few Native Americans working on whaling ships...Pequots included...out of New Bedford, Narragansett...in fact, the American Whaling Industry in large part financed the American Revolution...US Whalers exported whale oil from the Grey Whale to Europe...the preferred whale oil for lighting at the time....

...and, one could easily make the argument that the projection of US Naval power has it's roots in that whaling industry...with the decline of the population of Grey Whales in the Atlantic, American Whalers were forced around South America into the Pacific...developing the technologies/capabilities necessary for projecting naval power...

So, from that perspective, you and the Peqoud are well on your way for some fantastic journeys...and once the girlfriend trusts the Land Cruiser, she'll appreciate all the work you put into it and look forward to all those shared experiences in the Land Cruiser you guys get to make...

Many people don't put together that when Melville set out to write Moby Dick - he in fact wanted to write the great american novel - in 1851 when Moby Dick was published - whaling was at its precipitous as the largest industry in the country. Melville himself was a whaler (read Typee amazing true story ) The discovery of oil in late 1850s essentially killed the industry - only the Japanese whale now

My FJ60 is also writing a Great American novel...every time I drive it!!!

Is it odd - I just drive my Fj62 around - like just get in and drive - with no purpose ? I have gone through a tank of gas in a week just wandering around central PA

You know, you're probably pretty close to this guy:

He's the guru of Land Cruisers here in the US. He's over in Lancaster, OH. You might consider setting an appointment with him and driving over and having him go over your rig, making recommendations on what needs maintenance etc.. Might not be a bad idea. I'd do it if I lived where you do and it was my first Land Cruiser...

ThePequod said:
313 miles away - totally worth it - I am going to contact him - make the trip - thanks so much - would like to get this to be stable enough to be a daily driver so i can sell my other car
Click to expand...


Yeah, go for it for sure. He's a really great guy and knows these things inside out. And if an issue comes up over the coming years that you don't have the tools to do-it-yourself, he does all the big stuff...engine stuff, etc. etc....

You're lucky you are so close.

The Pequod, Melville, Ahab.........Oh Hell....Mobydick here! Lol, named my rig after my favorite movie, not to mention mine is a big fat white '62 just like your's! And like the others have mentioned- A Big Welcome to ya!

As you can see this forum is a priceless resource. You've already got some answers and some advice. I'll second those who recommend the 60's forum and also, once you get comfortable driving your whale the "best mods for under $50" is a great one. Use the search feature, go get a factory manual- not some Chilton's pos because you will need it. Take it easy, go slow, and after you've been "in" a while the water will be fine! For a while anyway- avoid visiting the classified sections. You'll only get all wigged out wanting to drain your bank account! Scrub that under carraige the best you can and buy a case of black rattle can and go at it. Hope you end up loving your's like I love mine!

The fact that someone looks like they were pulling a trailer with it- search for a "rodney flush" on the tranny, or at least check the condition of the fluid. Besides, checking ALL those fluids needs to be high on your list of priorities.

My receipts since I bought my 62 reads like the "Great American Novel". Welcome and take the advice already given and have fun with her. I've gained a new respect for fixing things on my own.
You must log in or register to reply here.