I've now just got my truck street legal and have been driving it for a day, its been fun, then the 2nd day it was on the road me and alex ( lowtideride ) went to paragon to run some blacks, all went well but on the way there and worse comming back we had the worst exhaust leak... its a constant thing...


to give ya some background i have a header and weber carb and the exhaust runs straight out the back and curves at the end (pointed out towards the shackles) I tried to seal off as many holes to the inside of the cab as possible but its still pretty bad. I've heard that if your exhaust is pointed the wrong way out the back you could get bad fumes. We did a seafoam test down the carb and the header at the flange only smoked a tiny tiny but and we tightened it up, still having the problem and now the seafoam loosened crap up and go something lodged somewhere and now its not idling right... but thats a different problem..

i also think it might be the freaking valve cover, i heard they leak pretty good. were doing the valve adjustment tomorrrow so it will be all nice and sealed up with some black rtv and will stay that way till i get a 2f valve cover.

any sugestions would be great and i thank you in advance

i have one of those 6 tah 1 headers, here's a crappy pic of where its routed... everythings pretty new, the end where you dont see tapers off to the drivers side right out near the shackle.... maybe i could get a tip that points it a different way? or reroute it somewhere else? 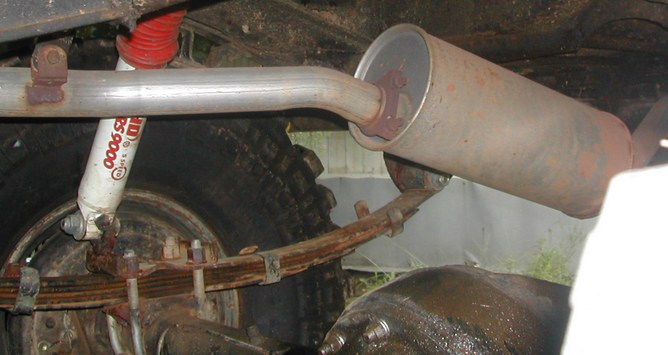 I used to have a terrible exaust smell in the cab. I could smell exaust on my clothes, and my wife would have nothing to do with me.

No matter how many cracks I would plug up, it still stunk. The fix was really simple, and cheap. I rerouted the exhaust pipe to the stock location. It used to come straight out the back, and now it comes out behind the wheel with a little downturn at the end. Result = no smell at all and not getting woozy anymore.

Are you sure you are smelling exhaust fumes? It isn't raw gas, is it?

The tailpipe, ideally, should go out several inches beyond the rear quarterpanel to the side (left, or right depending on the year of your truck).

Exhaust fumes and the carbon monoxide in them can definitely kill what few functioning brain cells you have, as well as knock you out and kill you and the children in the school bus you hit as you went out. So, take this seriously (as I know you have). You could just go topless for the time being...

i would get it too, but that was because i went dual exhaust with my v8 swap and had the exhaust exit under the doors.

bandy rooster said:
i also think it might be the freaking valve cover, i heard they leak pretty good.
Click to expand...


There should not be any correlation between exhaust fume smell in the cabin, and a leaking rocker cover, unless oil is running out of the gasket area, onto the headers and being burnt, and if this is the case, it would be VERY obvious from the oil level change between fills, and you would have a blue cloud following you around, that would also be very noticeable when you come to a stop...It would be similar to the Peanuts charater, Pig Pen.


If you can feel exhaust gases leaking out at any junction in your system, you have a leak, and it will lead to the issue you are describing. Check all of your joints in the system, especially at the header.

with engine running block exhaust with your hand - if you can hear a hiss that's where the leak is.

If no hiss (and it stalls) its a prob with where the exhaust exists, and possibly seals around the rear doors/hatch

mine is out behind the rear driver side tire and i have never smelt fumes.and by the way you drive a cruiser you smell like a cruiser,i have never been in one i havent smelled like,its just the way it is.
AND I LOVE IT BIOTCH
You must log in or register to reply here.

Is this a common place for a gas leak on the carburetor?