Everything but the leafs for an OME lift -- best bang for the buck? (1 Viewer)

Ok, really long story short (and probably a hint of my upcoming build thread), I got a pair of 62 axles to rebuild in the shed. The goal is to do the knuckles/a full brake refresh *not* on the truck in my muddy driveway, or be parked for weeks in the paved flat driveway someone is generously going to let me use for the axle install. I also have a stock FJ60 suspension, minus front and rear OME Dakar springs/u-bolts, and some poly bushings I've regretted since fighting them into place with the rusty OEM shackles/pins in 2016. It's been squeaky ever since, and they're definitely in need of replacement by now. So, to be fair, I'd say my setup actually worked okay for years, but I don't want to struggle that much for such a squeaky result when I'm bolting the new axles up. I could probably just replace the shackles and bushings and u-bolts, but I'm sick of the old, too-short shocks, so I'm feeling like I can kill a lot of birds with one install job.

I want every bushing/shackle bolt/spring pin to go in as nicely as possible when I throw the rebuilt axles on. I want long-enough shocks (honestly not picky about the ride -- these Toyota OEM ones ride fine, but limit down-travel by a few inches). I want to get a quieter, smoother, better-cornering and flexing ride out of these (now fully broken-in) springs. But, mainly, I want everything to fit without using c-clamps and other silliness to 'press-fit' rusted-bigger spring pins through noisy poly bushings. I should have replaced it all in 2016, but I wanted my dang truck driving again and didn't want to wait for shackles in the mail so I made it work.

So, 'easiest' option seems to be just buying an OME kit minus the actual springs from Kurt. Let's call that the most expensive, at around $1200. I could afford that, but I've heard enough conflicting things about the OME setup that I'd like to hear other suggestions that might get the job done just as well.

Can anyone talk me out of just getting generic greasable shackles, OEM rubber spring bushings, and some slightly cheaper new shocks (looking at $80+ for Bilsteins vs. $105 a corner for OME?)? We're talking about cutting that $1200 cost almost in half, which buys some seriously fun other parts/tools with the saved money.

If the OME stuff really is *twice* as good, that's one thing, but I haven't seen anything to give that impression. But, I'm also kind of at a loss for what non-OME bits I'd actually get instead. Cruiser Outfitters has some decently priced and presumably fine (since *they* sell them) shackles and bushings, but MAF has slightly cheaper identical-style greasable anti-inversion shackles which look like they'd also get the job done. There are also dozens of stores which sell *a* set of shackles, with no really solid information to compare them with anybody else's. I don't need upgraded shackles, really; I just want normal function and an easy install. Same for the shocks, and everything else.

So, suggestions? What's actually available in 2020, too? We're at the point where there are threads on Mud old enough to drive...

I bought the OME leafs and bilstein shocks from 4wp and had them delivered to their store. Saved shipping and caught them on an sale weekend.

I bought my ome shackes, bushings and u bolts from curt.

I came out far less than retail by doing that.

I’ve got 45,000 miles in the set up. It works well. I like the ome bushings. I usually grease them at every oil change and they stay quiet.

The true secret is going with bilstein shocks over old man emu. They ride far better and are way cheaper.

HemiAlex said:
I bought the OME leafs and bilstein shocks from 4wp and had them delivered to their store. Saved shipping and caught them on an sale weekend.

I bought my ome shackes, bushings and u bolts from curt.

I came out far less than retail by doing that.

I’ve got 45,000 miles in the set up. It works well. I like the ome bushings. I usually grease them at every oil change and they stay quiet.

The true secret is going with bilstein shocks over old man emu. They ride far better and are way cheaper.
Click to expand...

Good to know! Can you find part numbers for those Bilsteins? It sounds like I have a really similar setup, weight-wise, and I've almost driven myself crazy looking at shock spec sheets in the past.

I have got 005/005 heavy springs front and rear, front bumper with winch and other junk and a rear kaymar tire carrier. It rides nicely.

The rear has settled quite a bit. It’s still over sprung when not loaded. If I add 100 lbs it makes a huge difference. 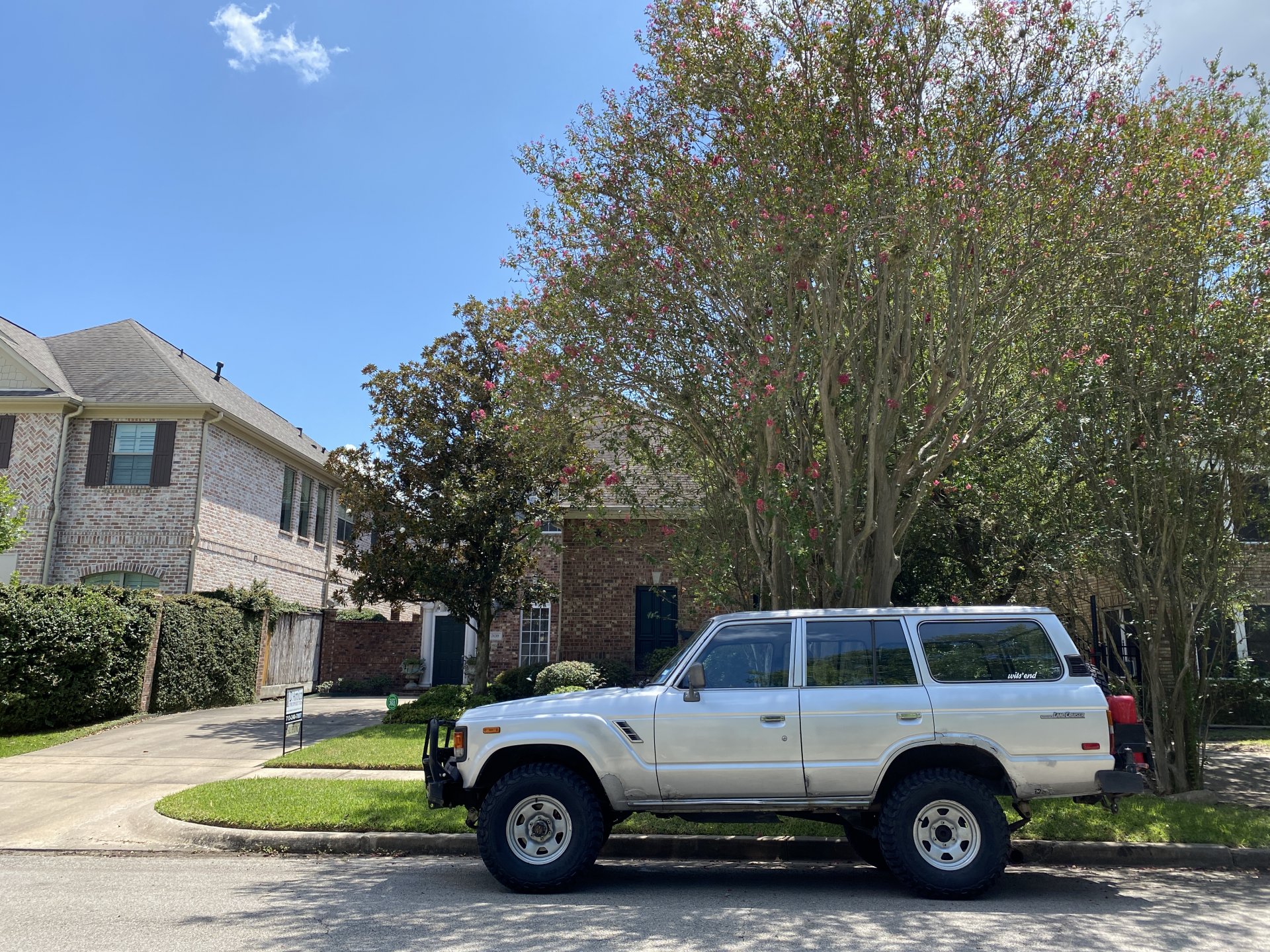 I don't have the rear bumper, but I have whatever Light + 1 leaf is in front, and 017 rear springs. It's a little droopy when overloaded with camping gear and 4 adult passengers, but the springs aren't too stiff empty, so I figure I'm close enough that shock valving shouldn't need to be significantly different. Thanks!

OME greasable shackles (and pins) are pricey as are the bushings, but money well spent. The shackle bolts are shouldered so there isn't slop. I concur with @HemiAlex.
The OME shocks limit down travel in the rear just before the stock brake line does. I just found this out while stuffing in Add-a-leafs a couple weeks ago.

Update:
- Ordered Bilsteins and an OME steering stabilizer I found great deals on.
- Planning to order OME shackles/u-bolts when I get odds and ends for the H55 from Kurt.

Thanks, guys! I'll start taking pictures as soon as there's anything more interesting than receipts to look at...

I've been using Procomp shocks forever, and I feel like my 10-year old Alcan springs were money well spent.

I ran the Man a Fre heavy duty anti inversion shackles and spring pins on my old FJ60 they were pretty nice. I had to replace the shackle plates with longer ones due to a a spring length issue using some used alcan spring I found on craigslist. I also like the look of the Dobinsons greasable shackles where the grease zero is recessed into the bolt head for protection, I think the Ironman ones are similar.

I had Bilstein with that setup and loved them. There wasn't a top stud option for the front shock series I used so I got an adapter kit that bolted into the top stud mount that let me use an eyelet style shock. With the axles at full droop I measured the eye to eye shock distance, added about 1/2 inch and ordered them from Summit by length. Not ideal for getting it done in a weekend but it was still drivable.

Get the OME greasable anti inversion shackle kits front and rear, 4plus Ubolt flip kits, all new ubolts, bushings, etc. Also I'd skip OME shocks in favor of the Ironman Foam Cell Pro shocks. Big improvement over OME or Bilstein. $800 delivered from 4wd1 out of Australia. They are well worth the cost especially if you travel rough roads and use the 60 off highway. Bolt on, fit perfectly, greatly improved vehicle control.

Does anyone know if Fox makes any shocks that fit a 60? I'm surprised people haven't started using them in cruisers. They make an excellent product at a great price and they're fully rebuildable.
You must log in or register to reply here.

Yesterday at 11:13 AM
brownbear

K
Best manual for repairs and for learning about your FJ60

Tuesday at 9:00 AM
Lordhelemt
L