Birfs need attention too, and left right spring sags. Have new springs coming so wasn't really concerned about it, but looks like the bushings may have been smoked and they used washers to shim the hangars 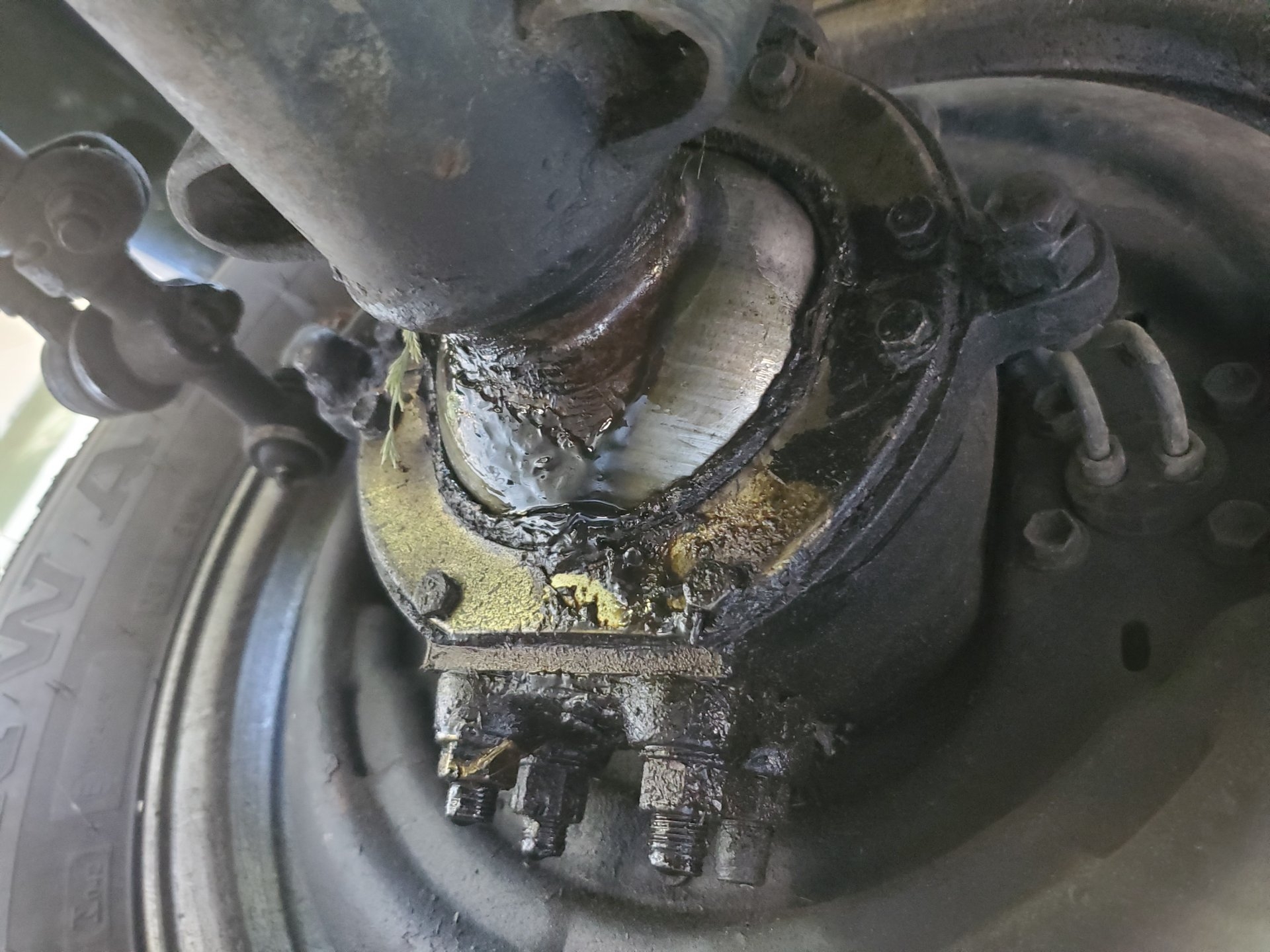 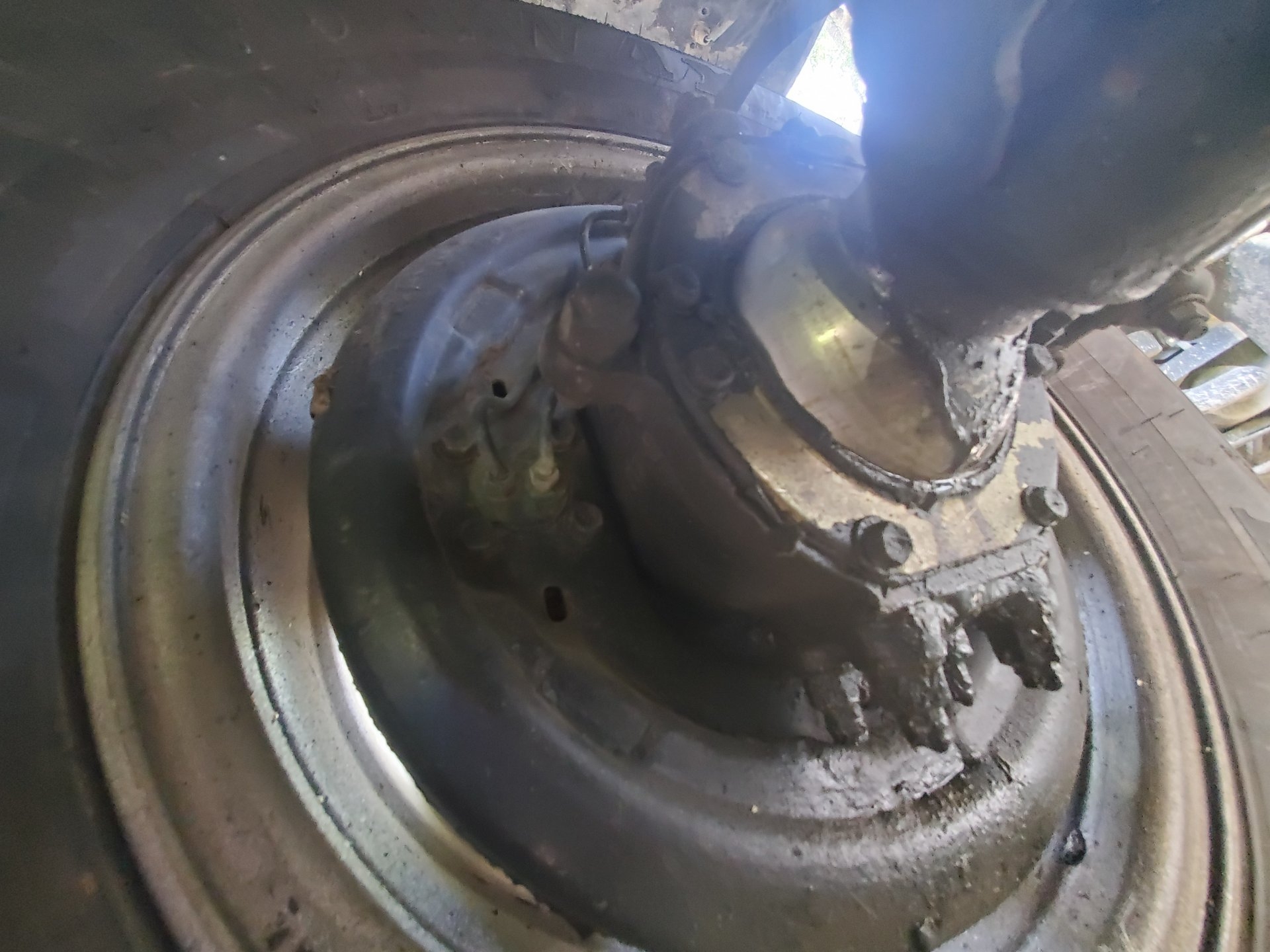 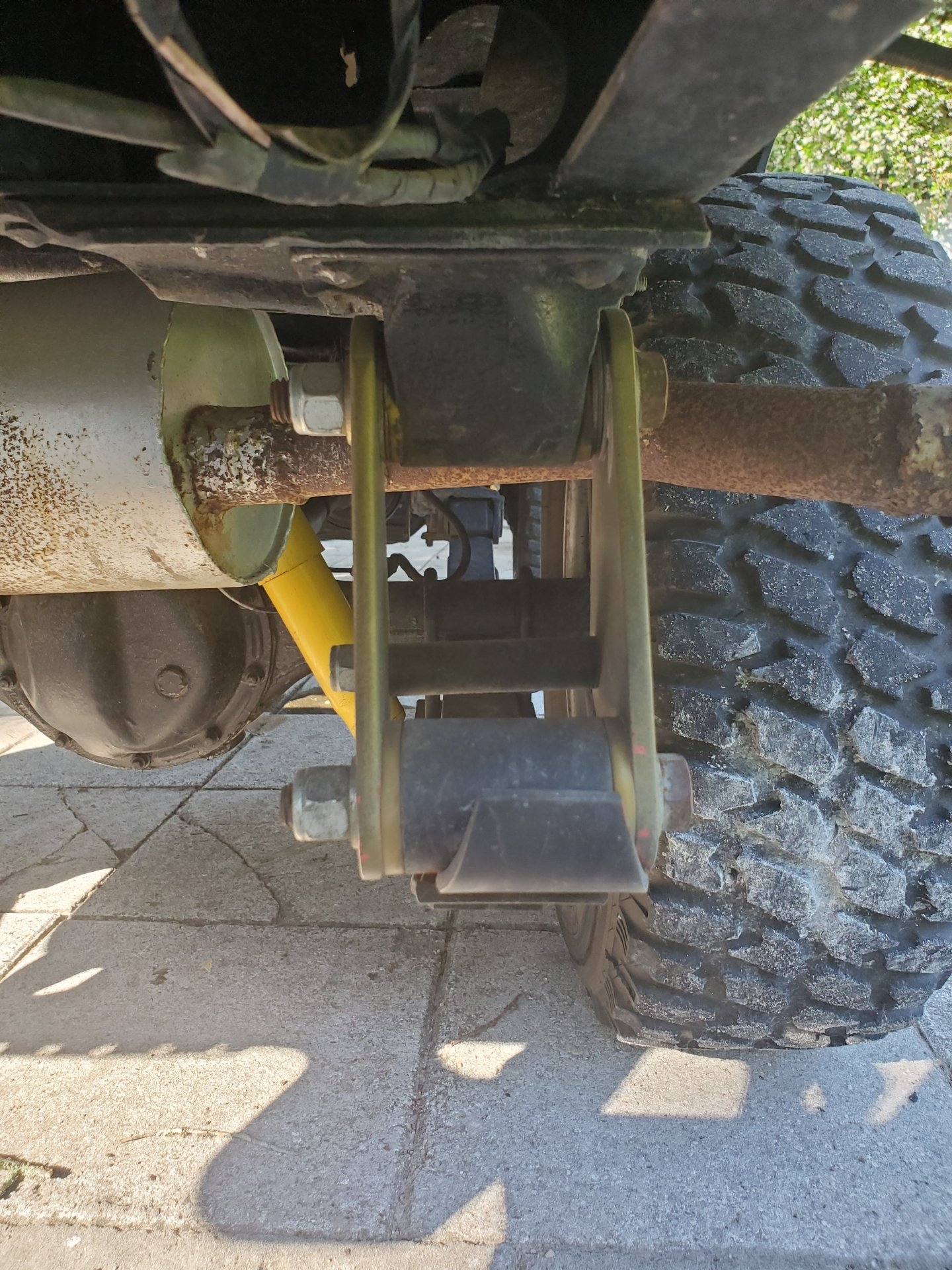 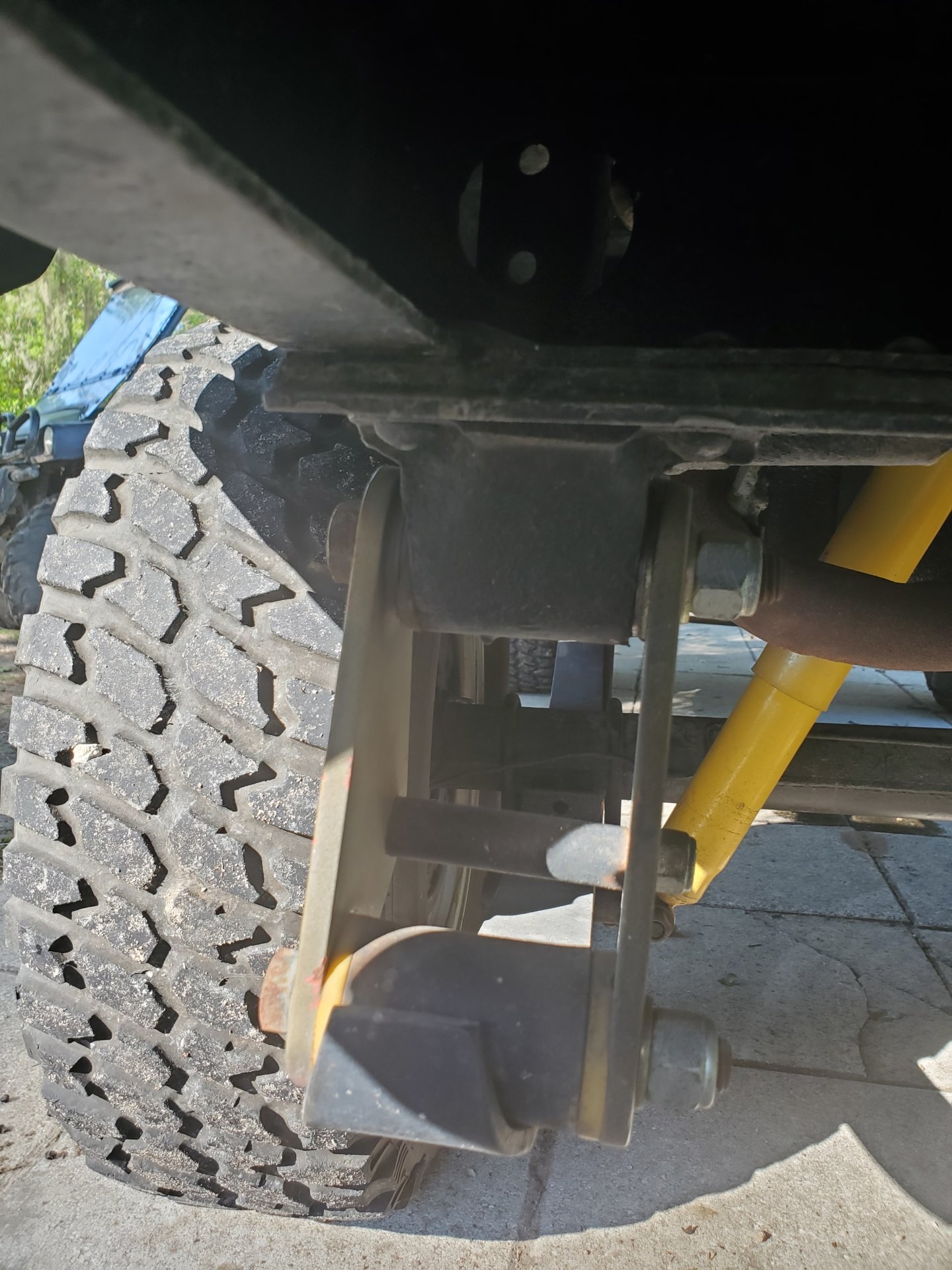 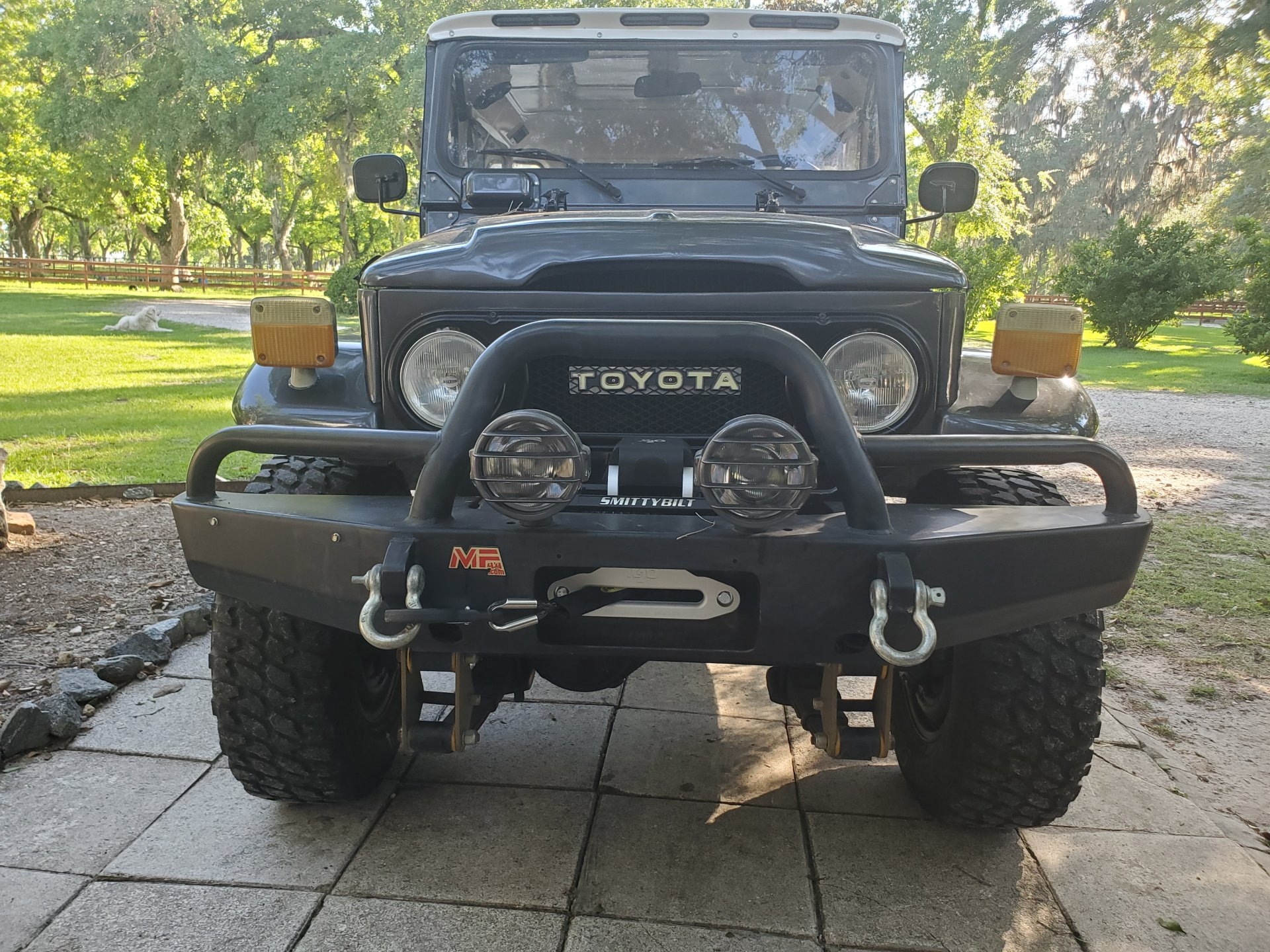 TRAILTOYZ said:
Thanks for the replies, guys. Been out of pocket for a couple days.

mounts on the bellhousing? what shape are they in? ... pics below

how long have you owned it? Was delivered a few weeks ago.
who did you get it from? Bought it from a guy in Miami who lives part of the year in Columbia. Did a rough inspection via zoom
how was it represented? Was represented as a partial resto in great shape. The guy has been very helpful. He took it to his upholstery shop and had the interior changed to black for me...color was the ugly bright peach when it came over. He said he drove it for a few hundred miles and didn't have any issues. replaced the alt and changed fluids when it got here. Said a reputable shop in SA worked on it. Obviously we have different definitions of reputable.

Here are some addl pics. Title says '71, not sure if a body swap was done
Click to expand...

it's not a 71, and you dont weld things on to the springs or zip tie hard brake lines to the frame.

-Those u-bolts sure stick down far
-The steering knuckle hardware appears to be mismatched
-You have 75 and later doors, and I presume the vent windows are a SA thing.
-Aren't those anti-inversion shackles upside-down?

sorry can't help much on the t-case, but good luck.

Going to fix the ghetto fab-ness, and springs are getting tossed soon so yeah the upside down shackles will be installed correctly when that happens.
Here's the motor S/N. does that tell me what year it is? 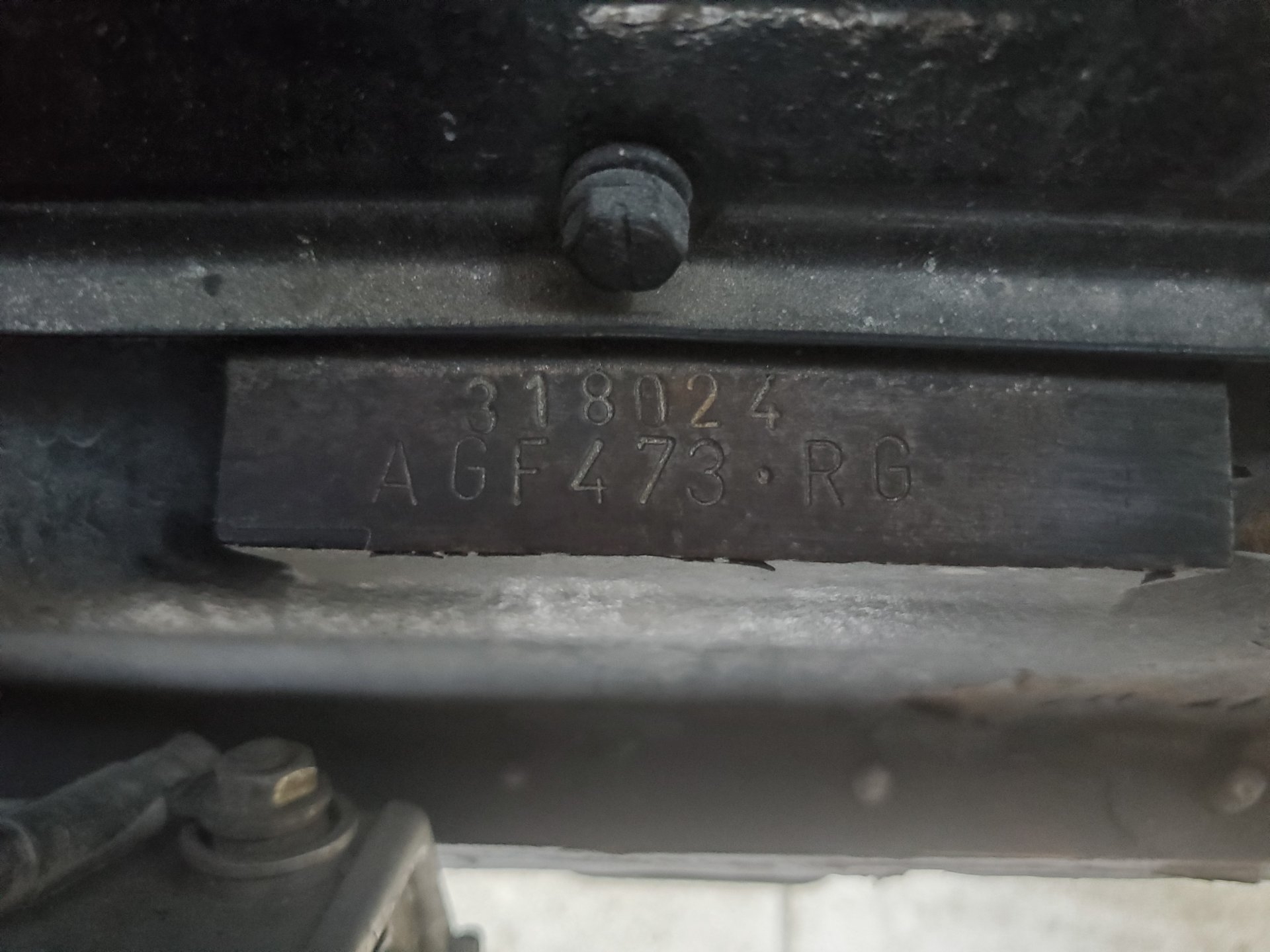 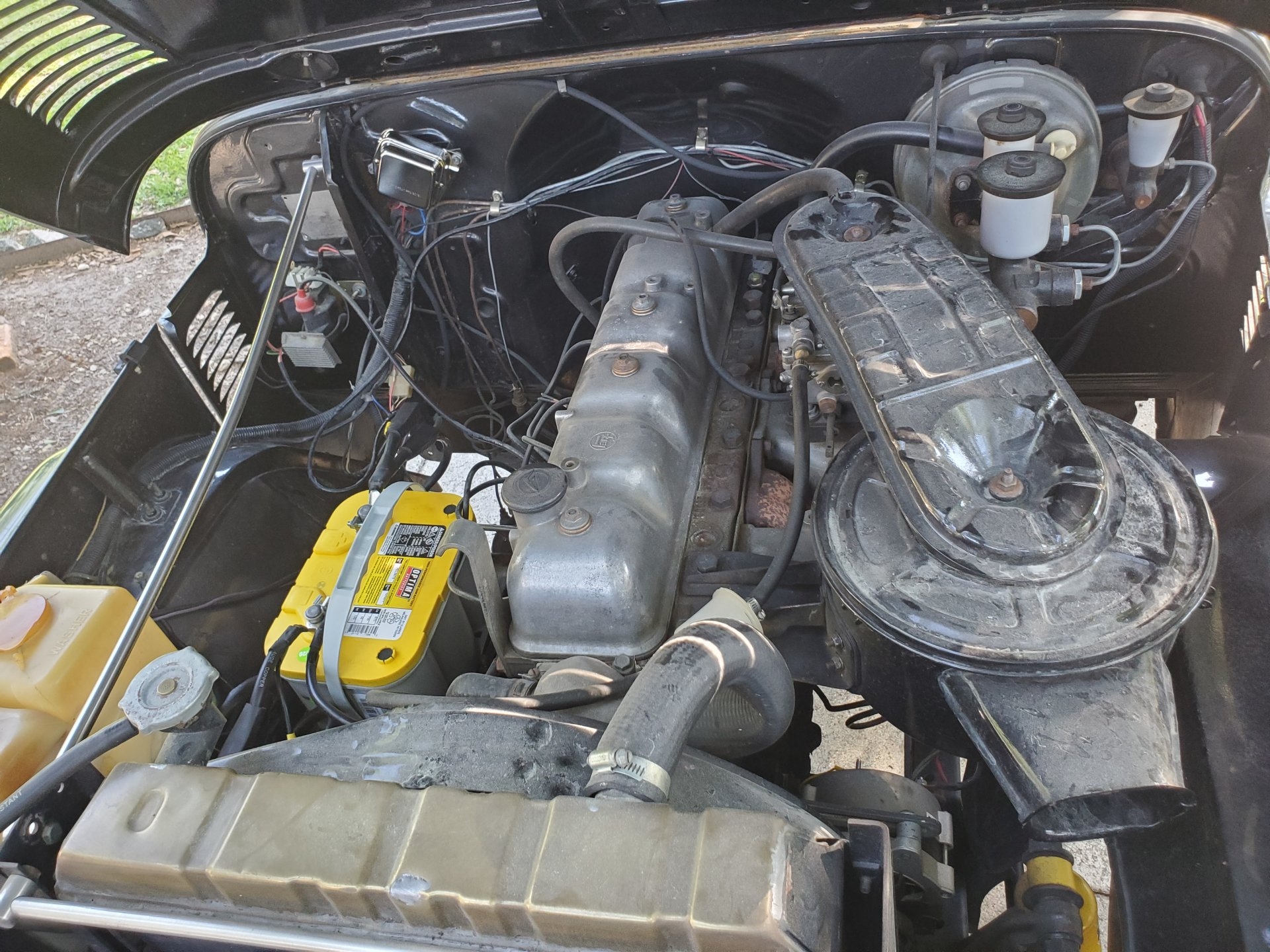 Since we’re spending your money…If/when you convert to front disk brakes, you’d be re-doing the knuckles anyhow.
3

the bellhousing cover is unique

the title says 71? does the frame # match what is on the title?

SA fiberglass 1 piece hardtop, does it have 1 big door in the rear?

Is that an oil filter facing down in front of the exhaust pipe? Thought they were all on the other side and facing up. But I just know 1974 and newer…

Has ambulance doors.Have to check the frame #. I'll get it squared away. should make a nice FJ43

Yeah someone remote mounted the oil filter at some point. Frame number and body match 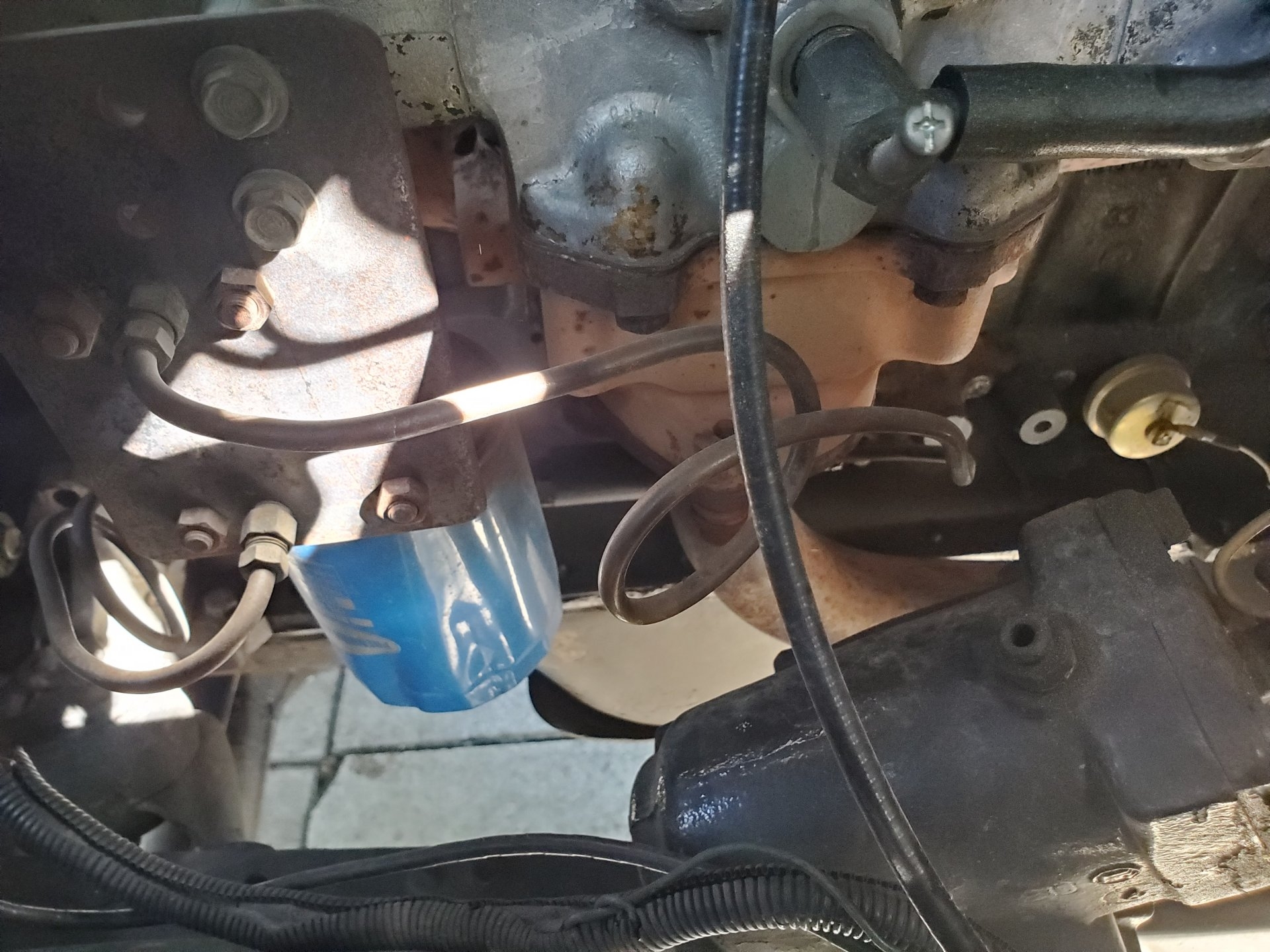 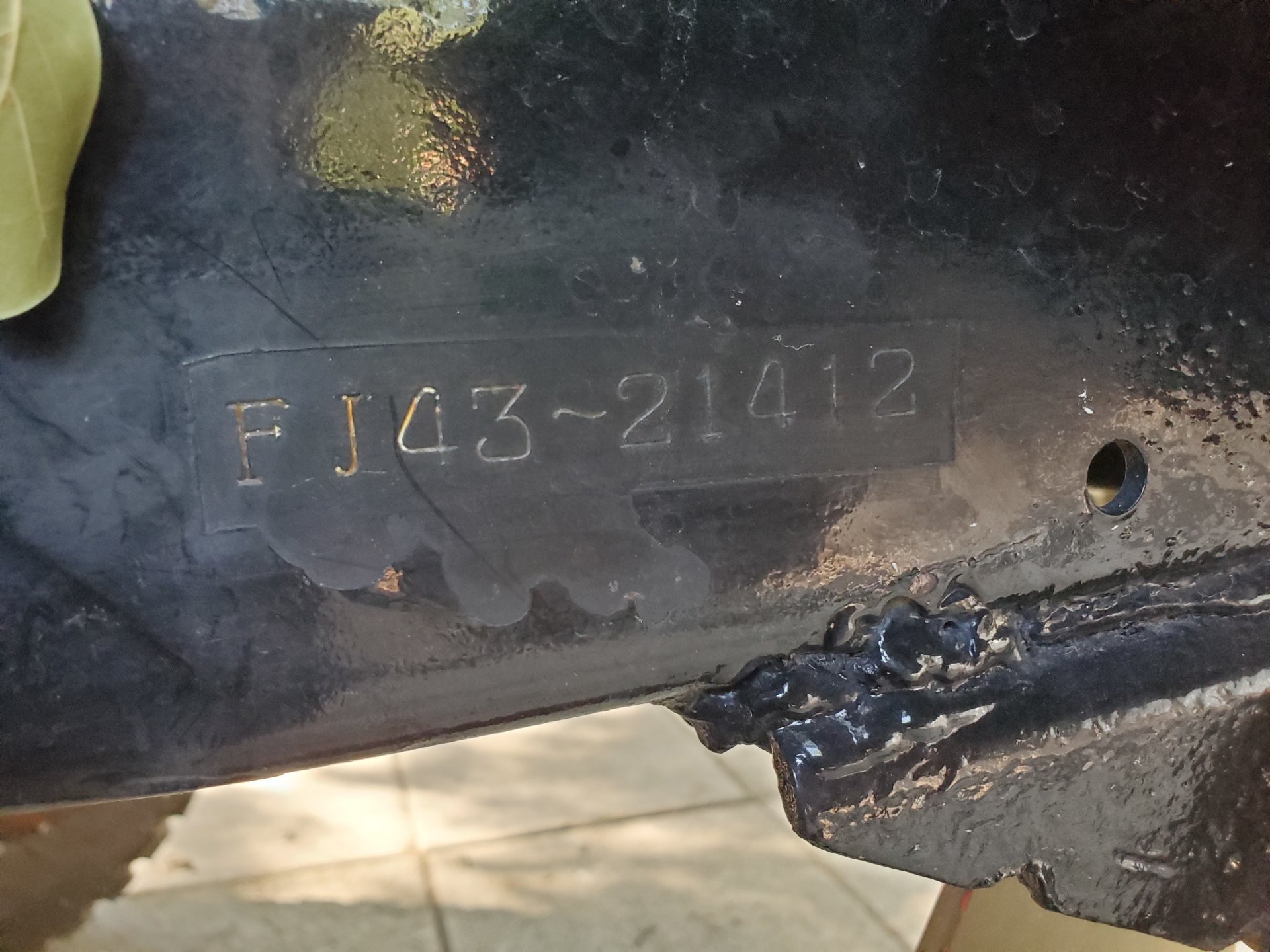 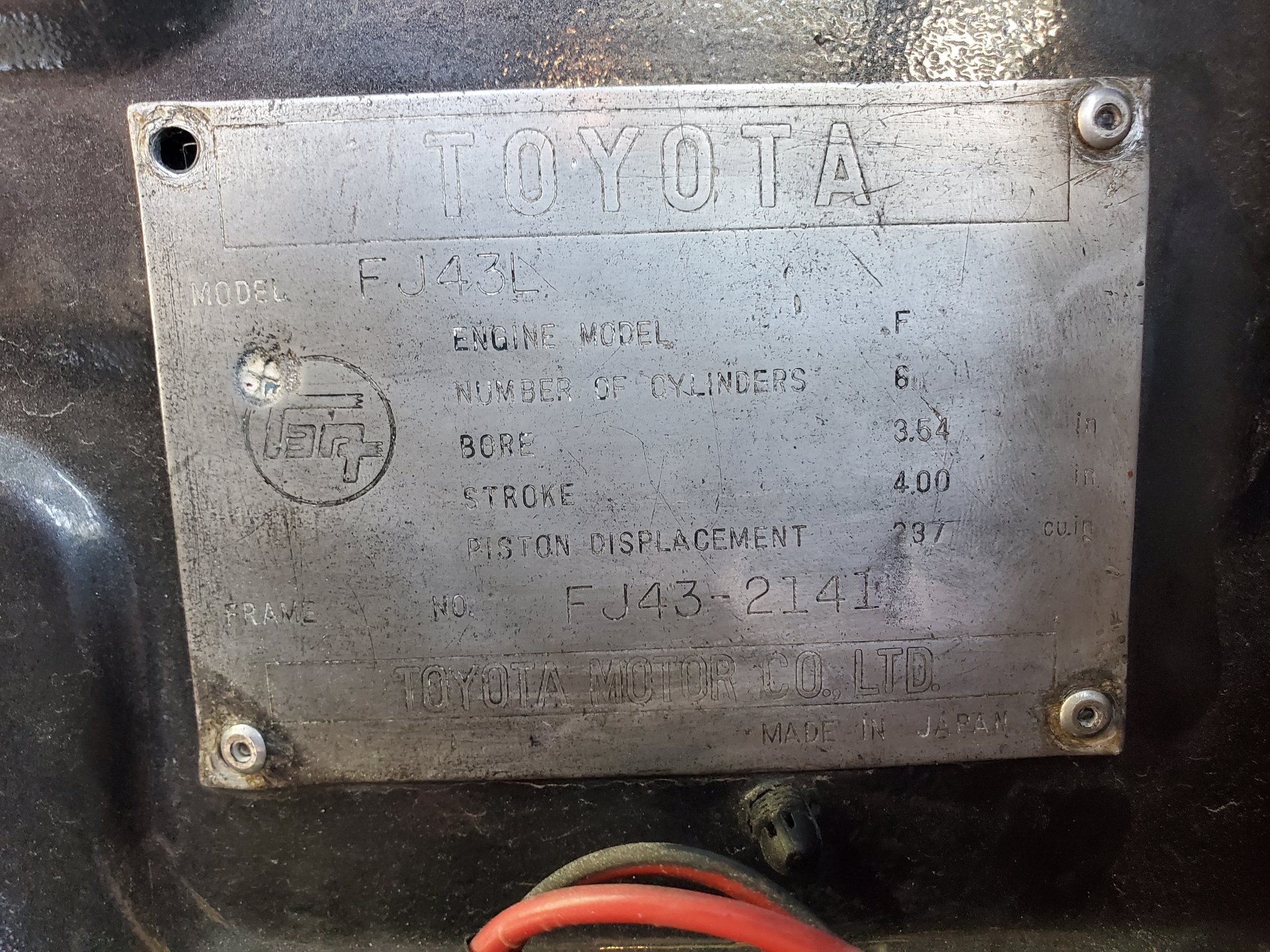 WOW that is some kind work from SA

The head and valve cover look to be Toyota but that fuel/oil filter and sending unit kinda freak me out.
3

Spike Strip said:
Is that a CHEVY Straight-6 ??
Click to expand...

looks like an earlier F block with a later manifold

numby said:
The head and valve cover look to be Toyota but that fuel/oil filter and sending unit kinda freak me out.
Click to expand...


that shouldn't be all that is "freaking" you out

It was nice they transfer the VIN plaque to the new body. 71 were held on with sheet metal screws. US market our VIN plaque under the hood was mounted to the passenger fender. But all ours had a heater with a blower mounted to the fire wall around where the plaque would go. 3/69 US did have a second VIN plaque on the A pillar with two rivets but believe the rivets as well as that plaque were required by DOT here. Outside of North America do not remember the second plaque and not even sure if Canada had one.
S

brian said:
it's not a 71, and you dont weld things on to the springs or zip tie hard brake lines to the frame.
Click to expand...

i was thinking the same thing: welded the leaf spring keeper directly on the leaf

Well, if it really is a 71, then that would explain the 1F engine and the ID plate that says "F" and gives the specs for a 1F engine. The bellhousing on back are later 2F parts for the 4 speed. The valve cover at least is the 2F variety as is the manifolds. Hope it don't have a 2F head on it, may not be getting oil to the top end. Carb and aircleaner are general market 2F stuff, looks like the side cover on the passenger side must have been swapped too, PCV line heads off in the wrong direction. Does it have a plug or anything near the fuel pump, low on the block, I think 71 F engines still had the oil fill tube into the oil pan rather than on the valve cover.

Engine number stamping was ground off and replaced with a number from the rebuilder I bet.

Whole lot of other later year parts under the hood. Is the battery bolted to a plate directly on the frame? Would have sat higher on a bracket if original.

And get rid of that plastic fuel filter, that is laying over the top of a nearly redhot exhaust runner from #1 cylinder under the aircleaner bracket. Good way to either melt, or fall apart and dump alot of gas in a bad place. Put it on the line from the tank to the fuel pump behind the battery. No need for it there.
J

Location
on the trail...

TRAILTOYZ said:
Going to fix the ghetto fab-ness, and springs are getting tossed soon so yeah the upside down shackles will be installed correctly when that happens.
Here's the motor S/N. does that tell me what year it is?View attachment 2668161
Click to expand...

Found 3 inline plastic fuel filters on the fuel line. Why replace when you can just add another one. I mean that's got to be better right?
You must log in or register to reply here.

Fuel gauge started reading past full mark all the time