My fj40 runs at 200 to 230 on the trails in the texas heat and I would like to get an electric fan to move more air across my radiator. Does anyone know of any good electric fans for these vehicles? and how difficult is the instalation? Thanks.

More information: My rig has a chevy 350 in it and is running a stock fj40 radiator.

I purchased this one and installed it on my aftermarket radiator. It's a nice size and fits well with my engine, although I'm running a ford 351, and not a Chevy.

It goes on at 180, and cycles on and off every few minutes are so. The temperature probe is a little finicky, so you may want to wire it to a switch, so you can turn it on manually. Mine is automatic, and for a daily driver, works well. It sure pulls a lot of air when it gets going, sounds like an aircraft taking off!
J

Do you think that adding this fan will move enough air under the hood to eliminate vapor lock?

There has been a lot written about the Carb fan and tough vapor lock starts, wouldn't it be just as effective to use a fan to move the hot air out from under the entirety of hood as it is just under the carb?

Maybe using an aftermarket Electric fan would solve this too?

i run the ford taurus 2 speed fan and love it! it was not hard to wire and moves a ton of air even on low speed. you may have to upgrade your alternator if you don't have a high output one already. i used an alternator from an 84 camaro with V-8 105 amp and about 55 amp just off idle. works great so far but people will say to use a mechanical fan instead because they cant just stop working. they usually recommend one from a Cadillac because of size and amount of air they move but it would hit my lower radiator hose so i went taurus instead.

and i used this wiring diagram from fussy_cruiser to wire it. but i went a fixed thermostat to turn on high speed instead of adjustable got both from summit (high and low speed thermostats) i went a 210 degree one for high speed http://www.summitracing.com/parts/BCI-75099/ and one like this for low speed http://www.summitracing.com/parts/HFM-ZFSWF/ you can also find them on eBay some times and you can get them for on and off at different temps if you like. 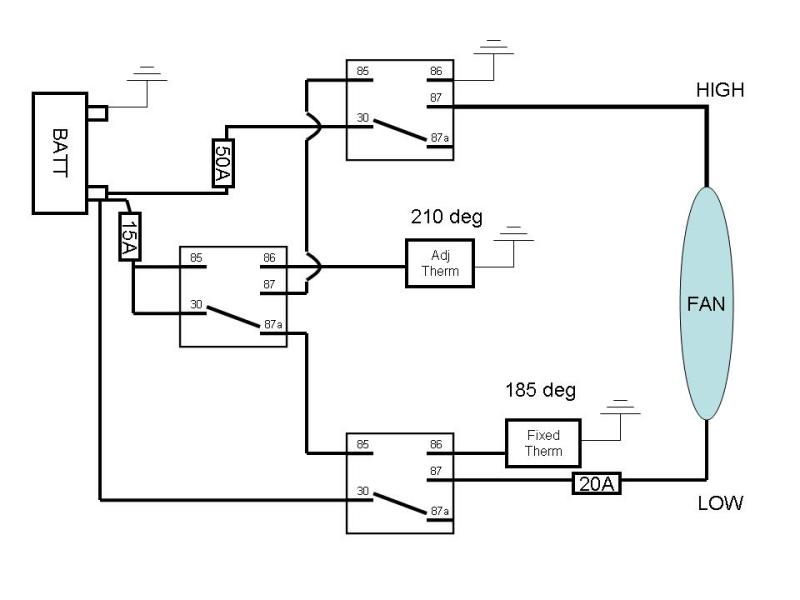 2X on taurus fan, and this switch to control it:
Flex-a-lite 31147 Flex-a-lite Adjustable Temp Control Switch
arround 60 bucks and lil wiring....and you're good to go....if you hit hard trails you can just carry a spare fan just in case....i did this to a jeep and work awesome...and this is going into my 40 soon

The fan from the MarkVIII and the Tarus witht he 3.8 liter V6 from the mid '90s is flat out the best electric fan out there.

But... as good as it is... a good clutch fan will move a lot more air. Get on of the big GM fans off a caddy or other heavy car/truck from the 70s/80s and you will move more air than anything else you can find. a couple bucks at any junkyard.

High flow water pump (or at least an anti-cavitation plate installed in a regular waterpump) is a must iMHO.


Mark...
You must log in or register to reply here.

Where to run electric fuel pump and filters on TBI