I decided to "upgrade" the cargo are of my HE with a drawer system. We transport dogs in crates and they don't go for it when you stack cargo on top of them, so coming up with a raised floor was the best way to make effective use of the tall LC cargo area. I looked at the options and they either didn't do quite what I wanted or they were kind of pricey for what they are. Also, I wanted to make custom use of the voids on the sides. In my case housing an air compressor on the left and a more robust jacking device on the right. I decided to go with 80/20 as the main frame since it provides the right amount of stiffness without too much weight and I had some extra laying around from other projects. Also it makes for a more precise mounting of the slides. That brings me to the slides - I picked a rather heavy duty Hettich slide that is probably overkill. I wanted the slides to both a) handle what ever weight I throw at them and b) lock at full and half extension. In practice they probably stole 1/2 an inch of space side to side and added 10 extra pounds in the aggregate, but not worth swapping at this point. The drawer boxes I sourced at the Cabinet Door Store. Good pricing and reasonable lead time. I'm finishing it using Raptor 2k. If you are considering this canned option of Raptor, a word of warning: I found the coverage on absorbent Baltic Birch to be well below the spec'd s/f coverage. I have used spray on Raptor with an air compressor and gun (both of which are collecting dust in my basement), but figured this would be easier than dealing with MEK substitute to clean up (I hate the smell of that stuff) and avoid the long set up and break down of the spraying equipment. Mistake - it has taken me 6 cans to get a passable finish, and cost much more than if I have just ordered a 4 liter kit that would have MORE than completed my project on all sides. Live and learn. It's taken me about 45 days to get the project more or less complete (working a little bit each day and skipping many). Bottom line, if you have the inclination and are a little handy, you can save a nice chunk of change over the commercially available options and get just what you want. If it's not your thing, pick the drawer solution that best suits you and know when you are shelling out your money that a lot of time and effort more than likely went into the design and fabrication.

When all is said and done, will have just under $1,500 in the project including the compressor and having spent almost $200 on cans of paint (ugh). Here are a some photos of the WIP (and I'll add some more once I get it all assembled): 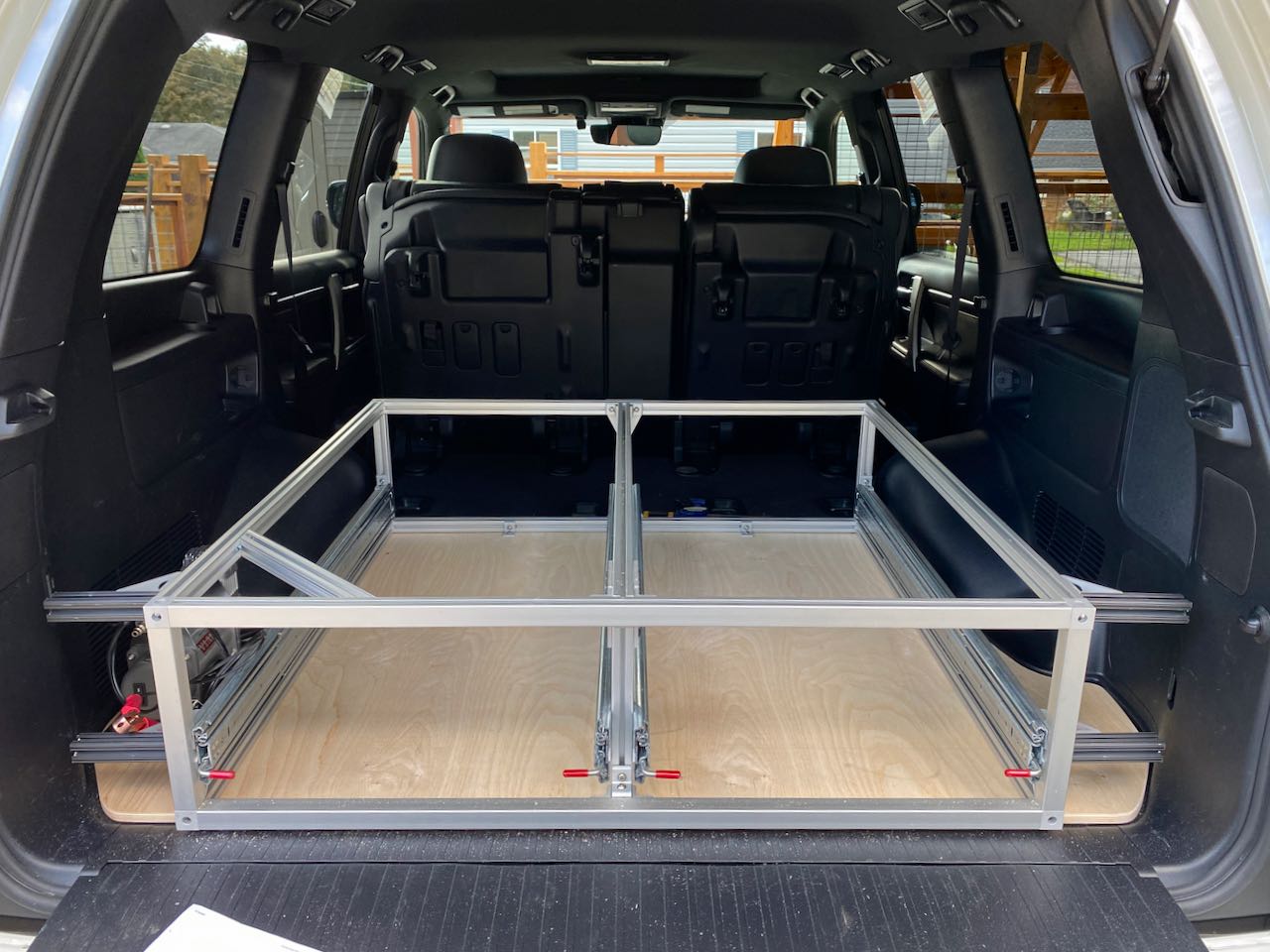 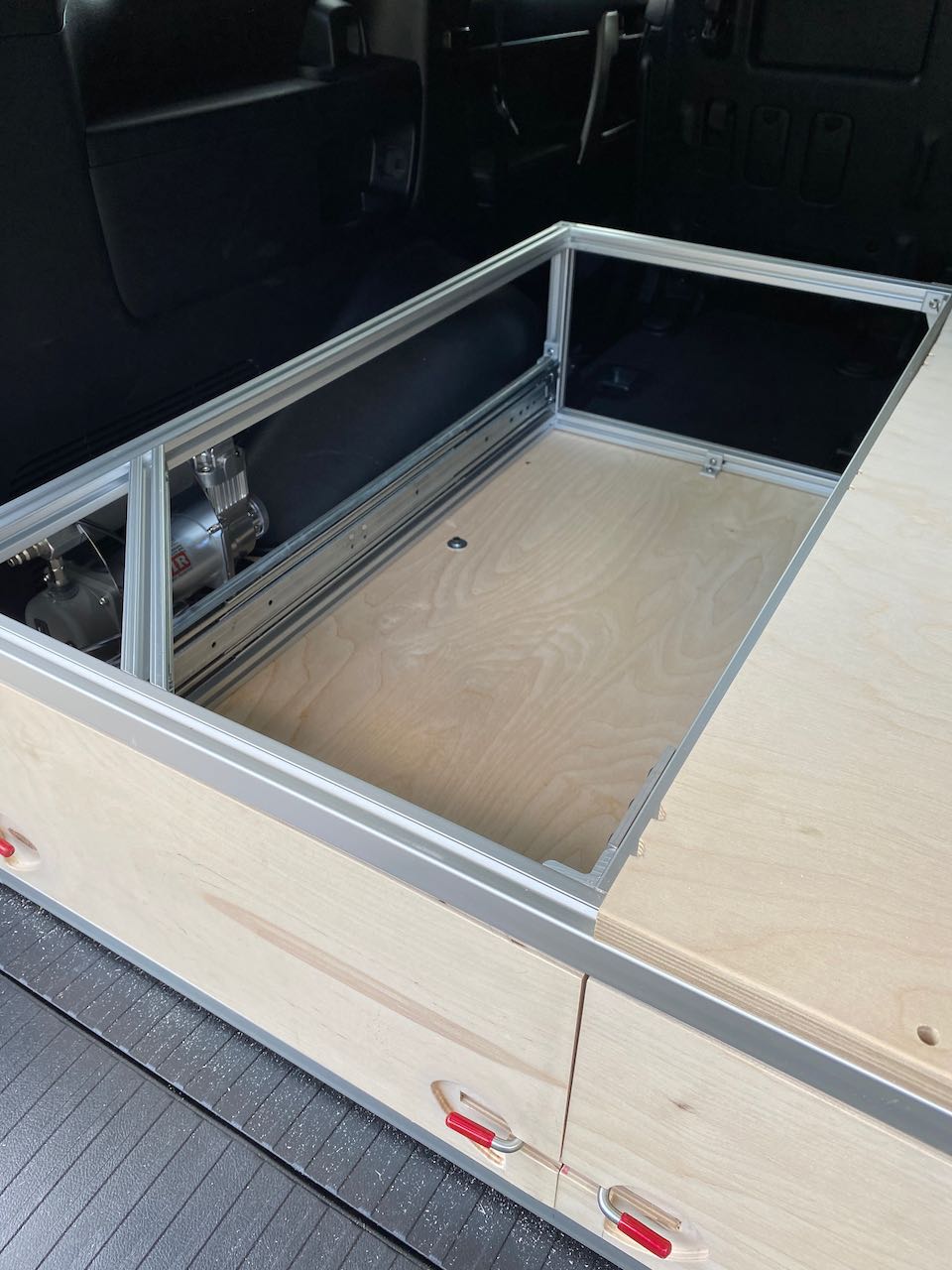 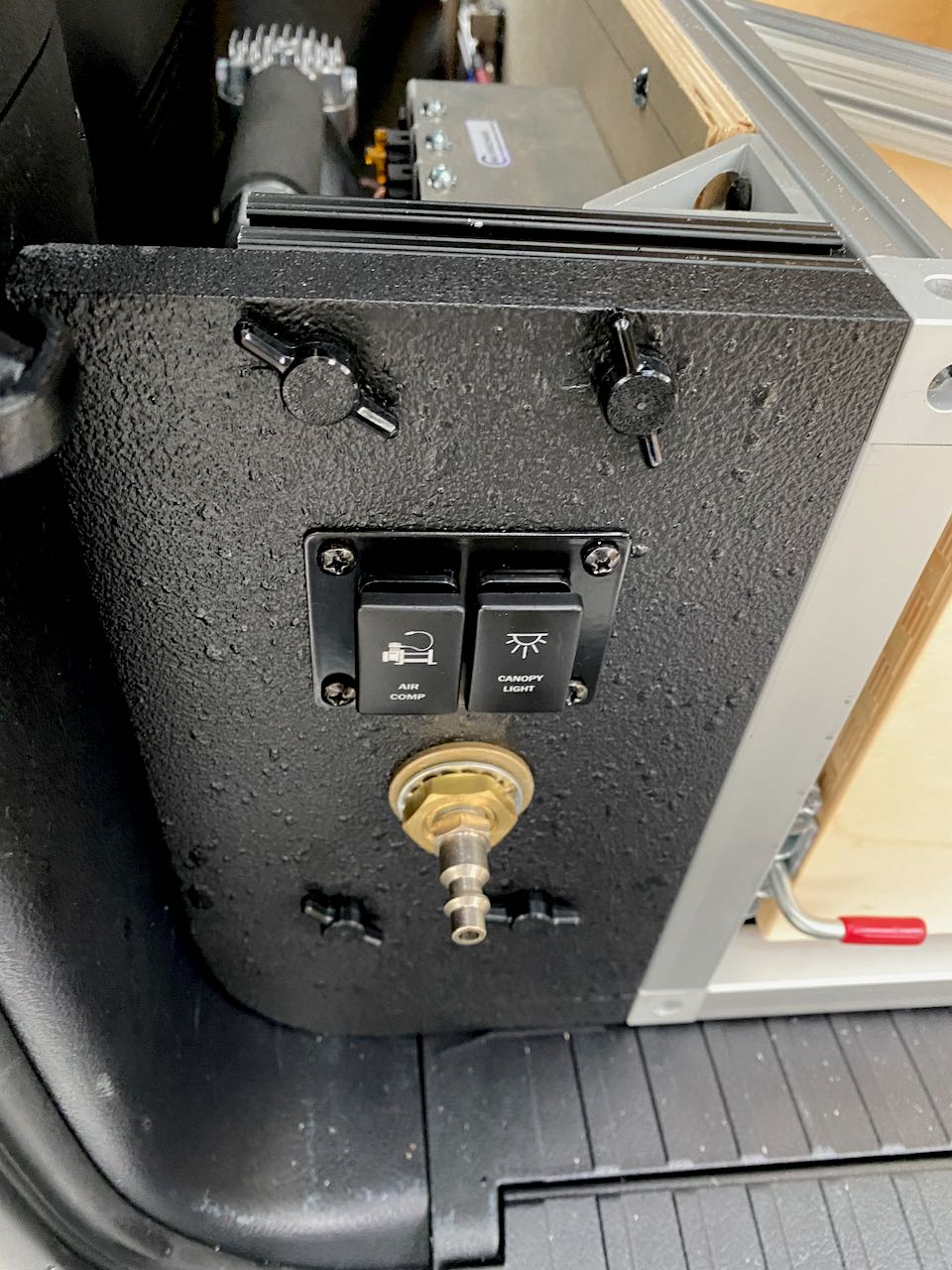 Looking forward to more pics. I’ve been thinking about building my own too. I really like Trekboxx but think I could build something similar for half the cost or less plus a lot of time and get exactly what I want. In my case, I like building stuff and have a shop to do it in. If I can make kitchen cabinets I’m pretty sure I can make a drawer system.

I’ve had mosquitoes around at air fillups a couple times. Can you reach the quick connect with the hatch and tailgate closed?

great work! Can you provide links to your slides? and details on your mounting locations?

are these 4 pieces secured?

Side extensions are supported by a standard 80/20 corner gusset like this: 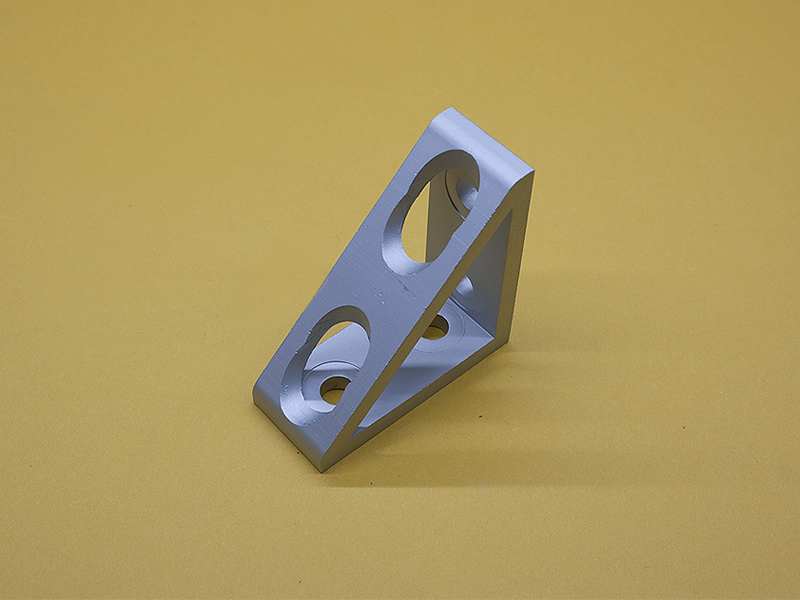 This is super solid since it supports almost half of the total length.
W

grinchy said:
I’ve had mosquitoes around at air fillups a couple times. Can you reach the quick connect with the hatch and tailgate closed?
Click to expand...

No, you would need to have the tailgate down. For a mosquito blizzard I would probably deploy a Thermacell if it was a major deal to keep the cabin clear or just drive along at a safe speed until I was clear of the menace. A good point though. I considered doing an install that would have fittings in each wheel well, but honestly, airing down/up for me is not a regular enough occurence to go to the extra trouble. In a former vehicle I had an under the hood solution, but it was not ideal due to heat and deeper than recommended fordings.

Wits End makes some nice bumper mounted fittings, if you do opt for an exterior install.

This would make a good flat pack kit to compete with the Reef and Air Down Gear Up offerings. Great looking design. Only thing I'd consider doing differently is hinged side panels to make easier access to the storage space on the sides - I fit a pair of Bogouts, and infrequently used items like spare outerwear in those spaces.
W 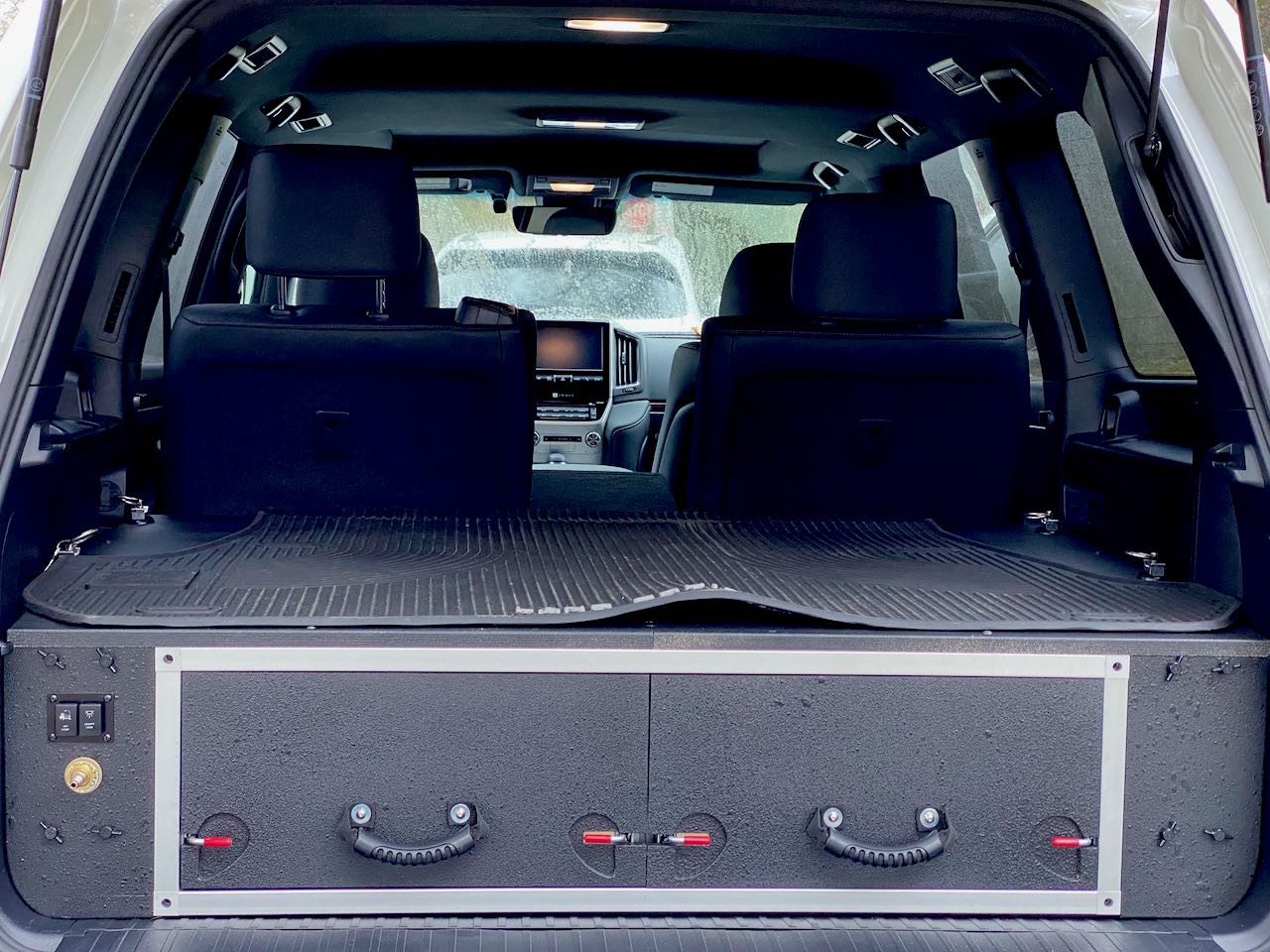 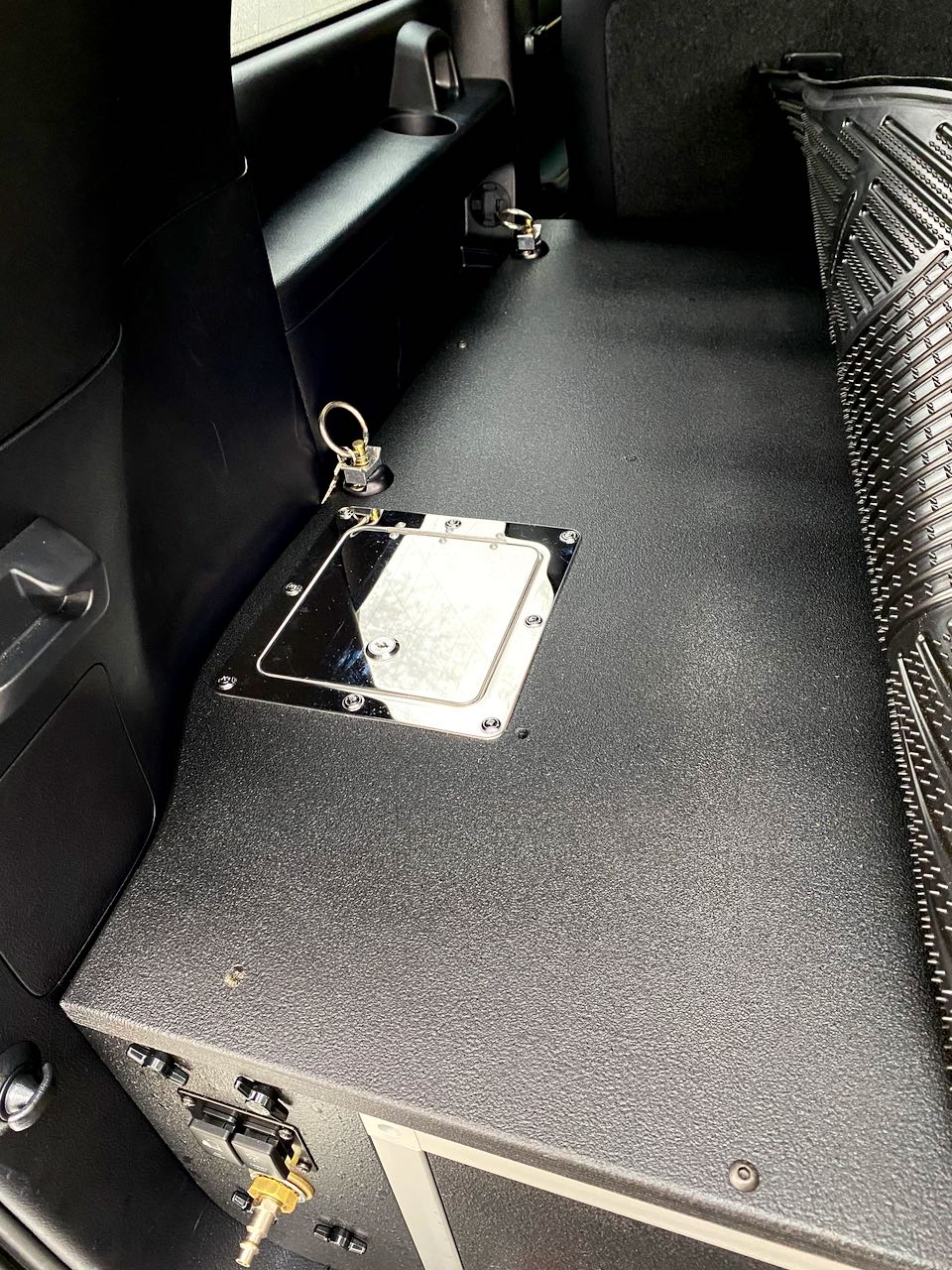 CharlieS said:
This would make a good flat pack kit to compete with the Reef and Air Down Gear Up offerings. Great looking design. Only thing I'd consider doing differently is hinged side panels to make easier access to the storage space on the sides - I fit a pair of Bogouts, and infrequently used items like spare outerwear in those spaces.
Click to expand...

I like that option too. For my part, I need the outside lashing point for the dog crates so a hinge would be put under too much stress even if I had a decent locking solution. I reinforced the "wings" with 80/20 and angle aluminum to handle the pull of the ratchet straps. Since I am not securing an ATV or another heavy object the force won't be that great. I can still stuff from the front into the cavity for a down blanket or coat, but I am contemplating using the remaining space for a DC/DC charger and custom battery bank. This is a deep rabbit hole.
W 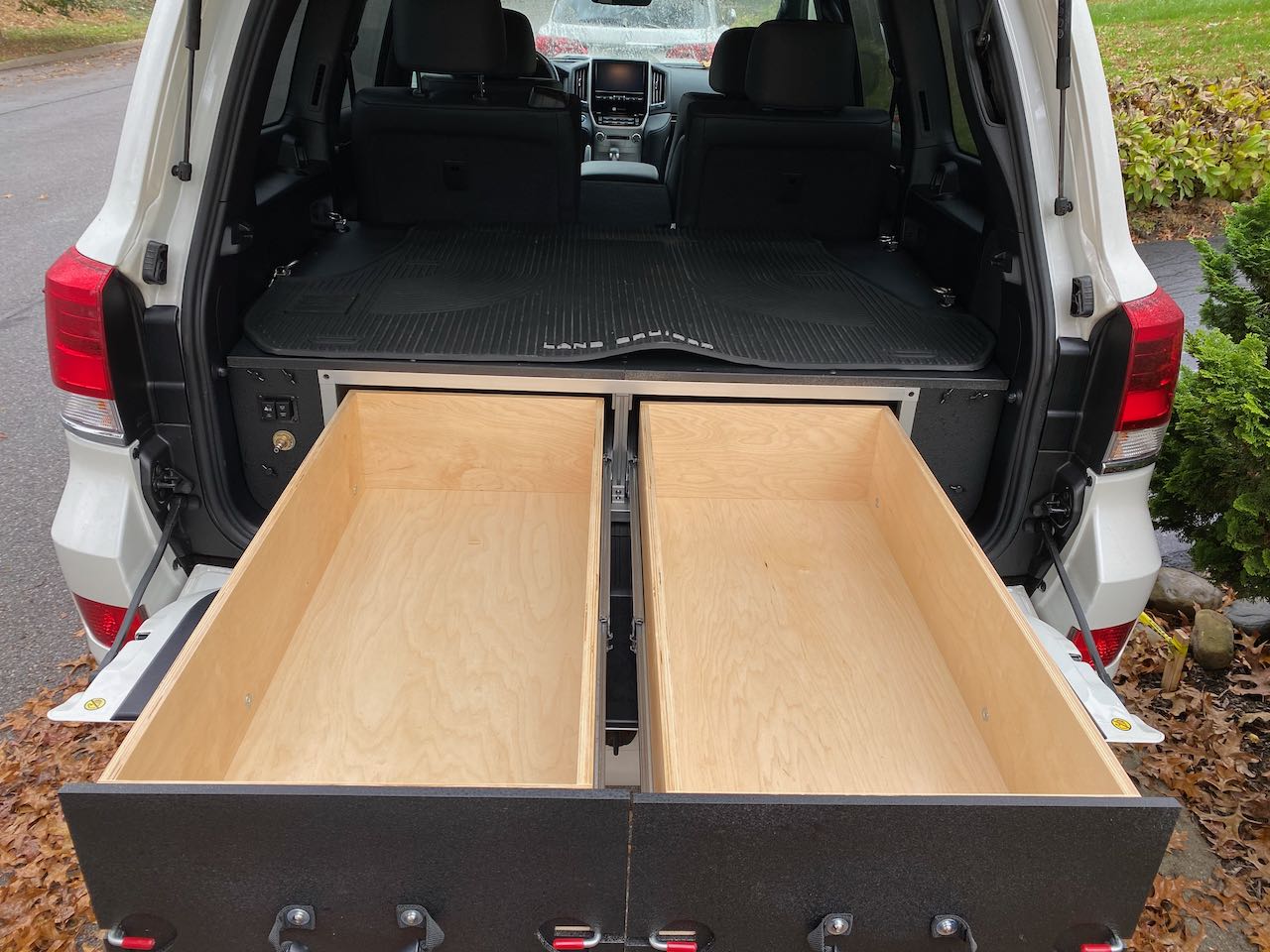 Now I need to figure out what is going to live here full or part time.

@WCDAVE how did you mount the slides to the frame?

elcie200 said:
@WCDAVE how did you mount the slides to the frame?
Click to expand...

Really well done. Any chance you could post links of all the parts that make up your build?
Thanks in advance... I need a shopping list!
W

elcie200 said:
@WCDAVE how did you mount the slides to the frame?
Click to expand...

I have 80/20 10 series stringers running front to back on each side and one in the middle. They are supported with corner gussets like the one pictured above at the front and back. The slides screw in to t-nuts in the stringer using 10/32 flatheads. Kind of ham fisted, but I knew it would be straight and secure. The height of the stringer also put my drawer-side t-nuts at the right height to support the weight in the drawers.
W

Crush 4 said:
Really well done. Any chance you could post links of all the parts that make up your build?
Thanks in advance... I need a shopping list!
Click to expand... 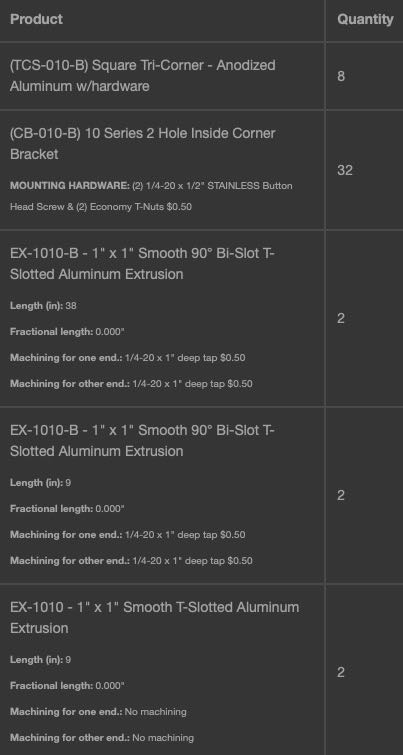 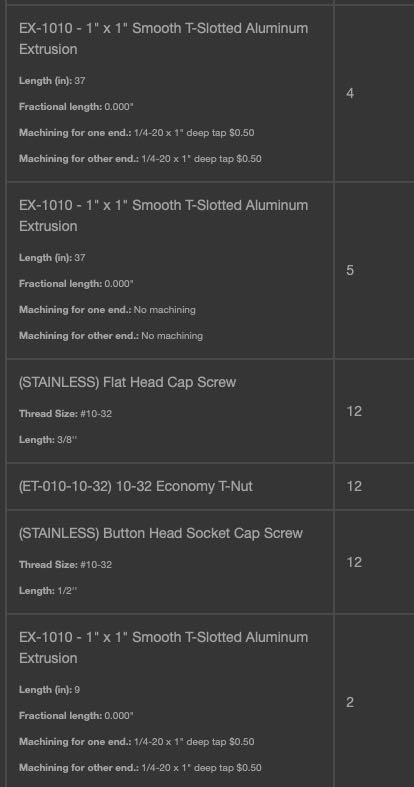 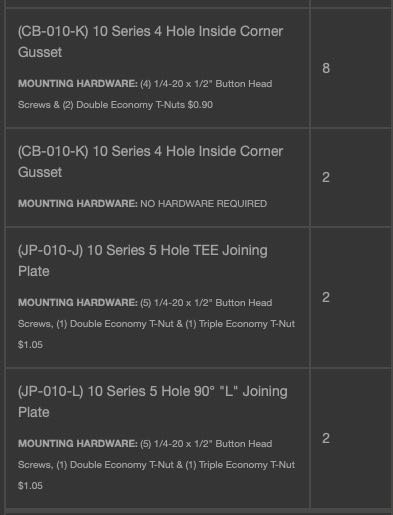 A couple of pieces of baltic birch from the local lumber yard, kayak handles from Amazon, slides as per above, and an inexpensive piece of plywood to make templates from so that I could rout clean finished contour on the top and bottom pieces. Viair compressor of your choice, Air on Board buttons, and some misc hardware. I also used a 45 angled section of 80/20 I had to keep things square (pictured in first and second photo of thread). I'd recommend one or two of those as well.
You must log in or register to reply here.

PSA: Do NOT store dish soap in your drawer system. Thank me later.

Ebc orange extra duty pads an slotted an drilled rotors ? Anyone have this set up