Here's my other BJ71. I was going to wait until I sold the first one to list this, but if you've been watching my ad here:

I've finally decided to just sell this--I had big plans, but, you know, life happens sometimes. Relatively rare truck (most BJ71's are RHD from Japan--this one's LHD from Europe), I imported this myself from Italy. Some of you may have seen it here when it arrived at the Port...

then you'll know I've run into a little snag with that one. So....

Comes with:
Ironman springs with 2" lift
onboard air compressor (unknown brand)
fire extinguisher
custom tube bumpers and sliders
big ass winch (didn't see a brand on it, but then I didn't look very hard)
interior and exterior roll bars
super supportive aftermarket seats
rally computer (no idea how to work it, instruction manual likely available online)
rear mounted jerry can
auxiliary lighting
no carpets or mats
custom diamondplate interior panels
side exit exhaust (didn't measure it, but it looks like 2.5")
a small assortment of spare parts (if it's a deal-breaker for somebody, I'll try and get a list together)
...and probably more I'm forgetting

Wheels are original type, Euro-spec split rims. The four rollers have Goodyear Wrangler 7.50R-16 mounted to them, and they're in good shape--definitely roadworthy. The spare wheel is included, but buyer probably should get a new tire for it.

As you can see in the photos, obviously the PO has "customized" this one. Maybe not to everyone's taste, but a lot of people seem to like it.

Rear roof has been cut off, and a custom aluminum-skinned cover put in its place. Rear "hatch" is a heavy rubberized canvas type material with a clear vinyl window in it. Rear doors have been cut as part of the customization. The whole thing can be unbolted if desired for a demi-convertible effect.

Everyone's going to ask if it has any rust. Yup. If you're looking for a rust-free car, maybe you shouldn't be looking at 31 year old Landcruisers.
Floors and frame are solid. Some rust at the bottom of driver's door, and in the rockers. Totally normal for these cars. Unusual when they don't have it. 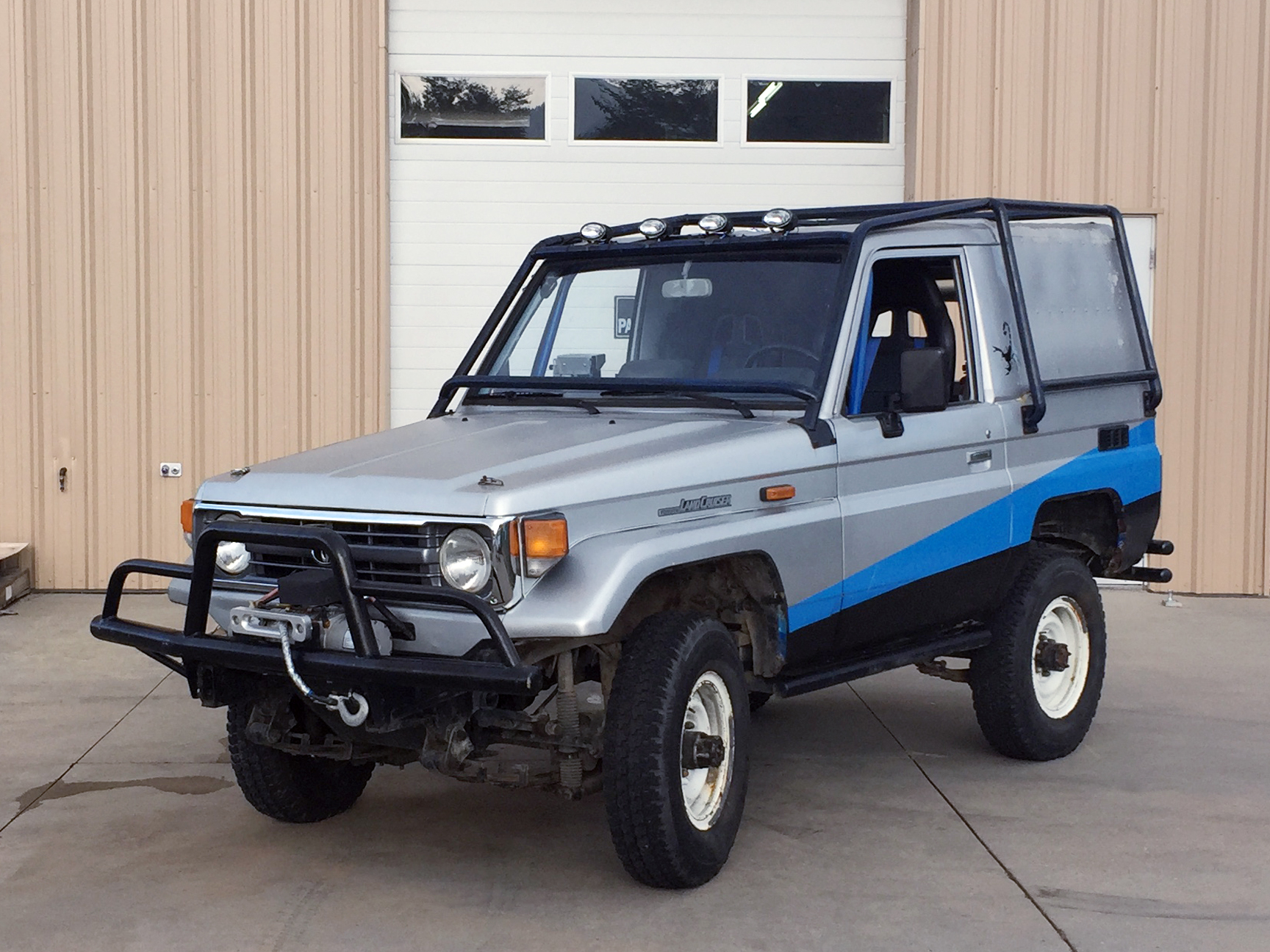 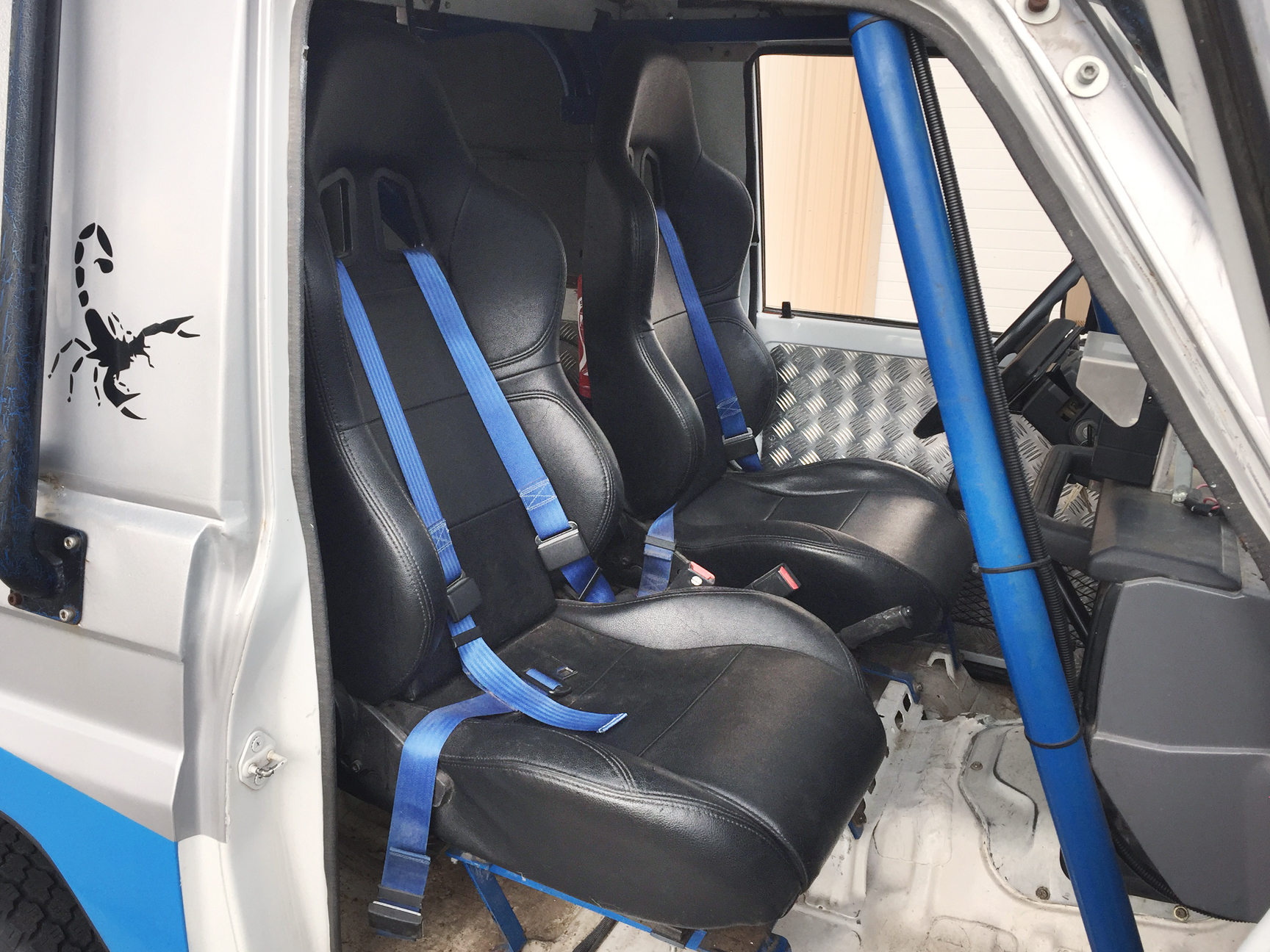 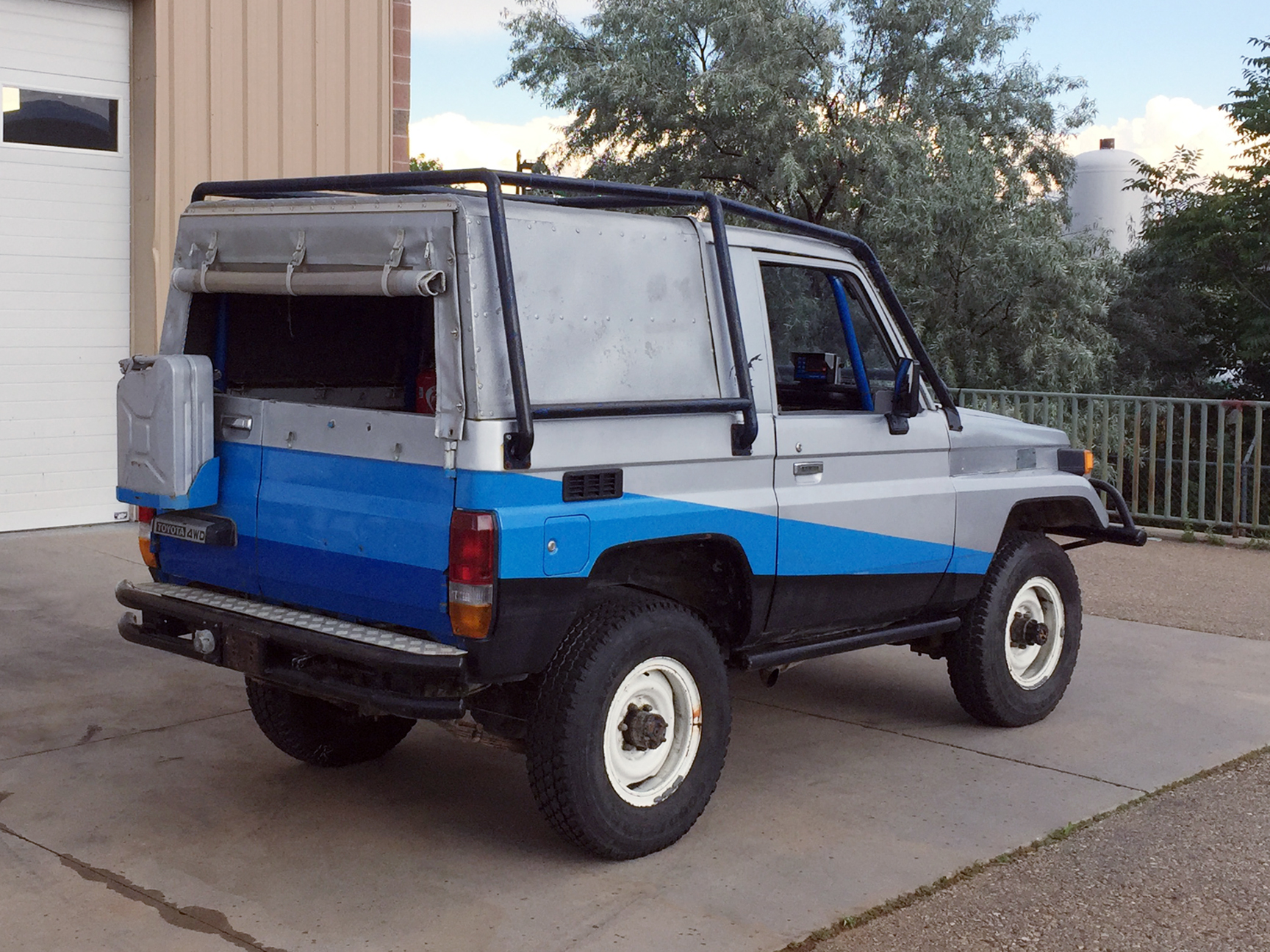 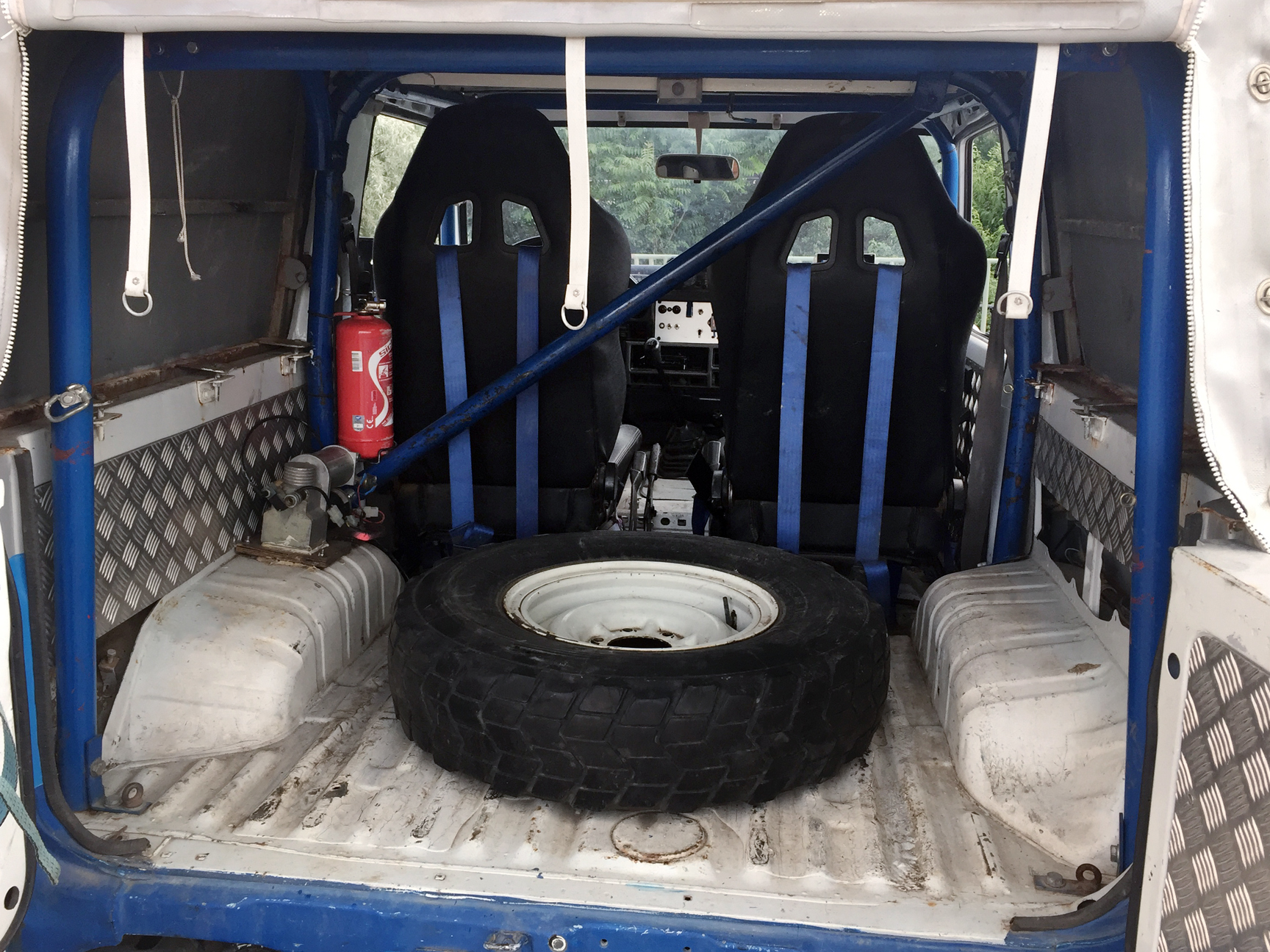 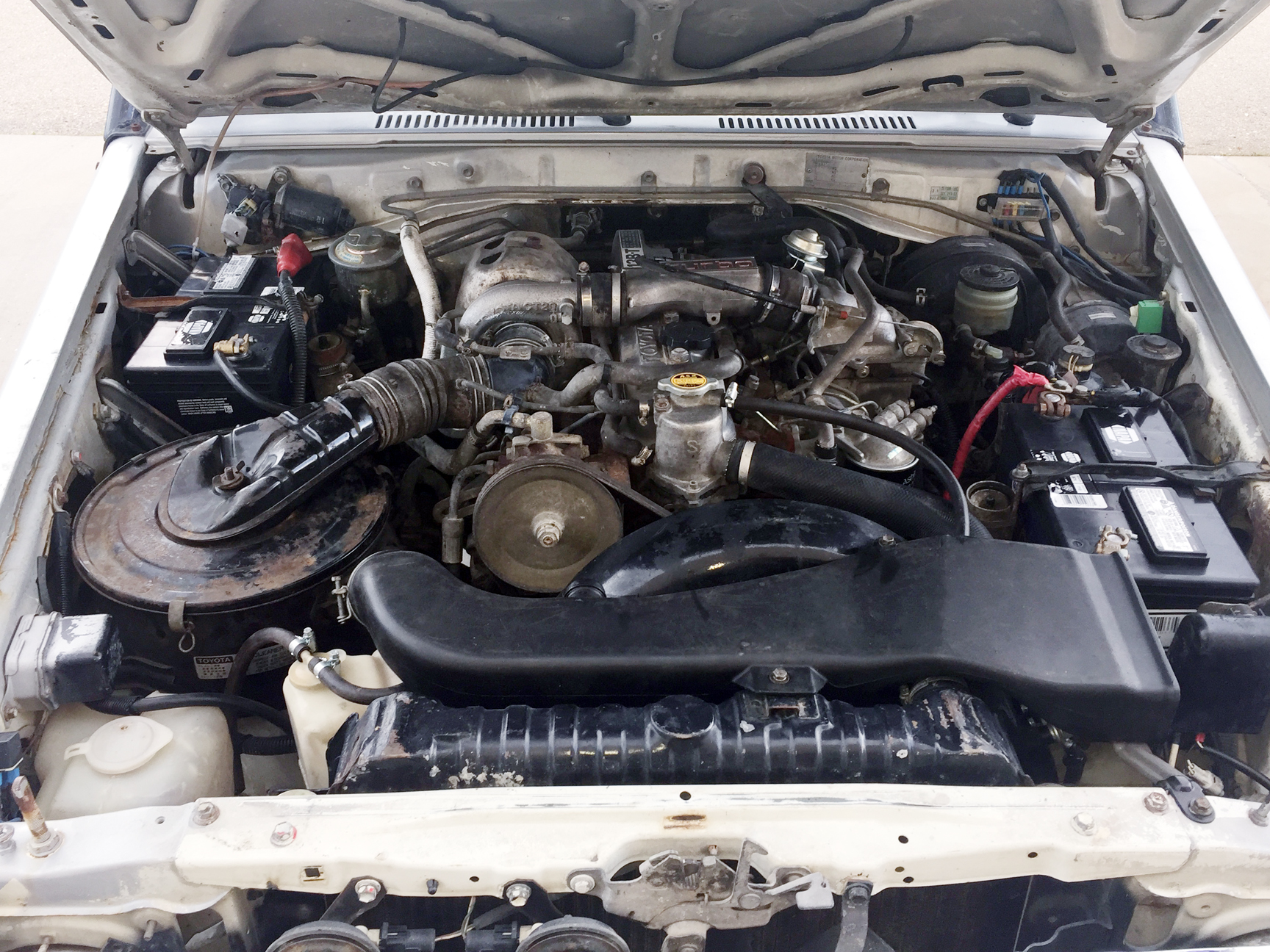 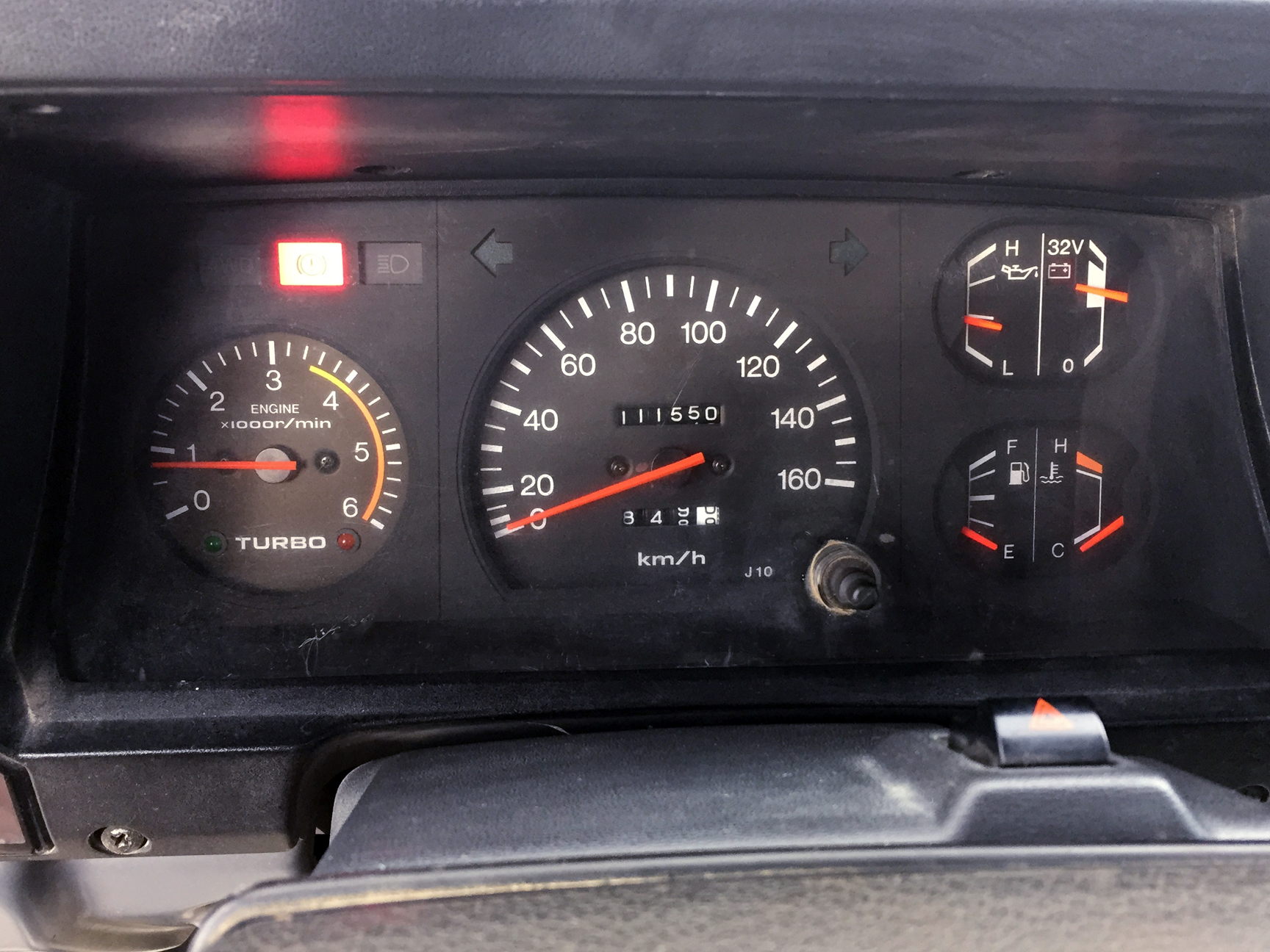 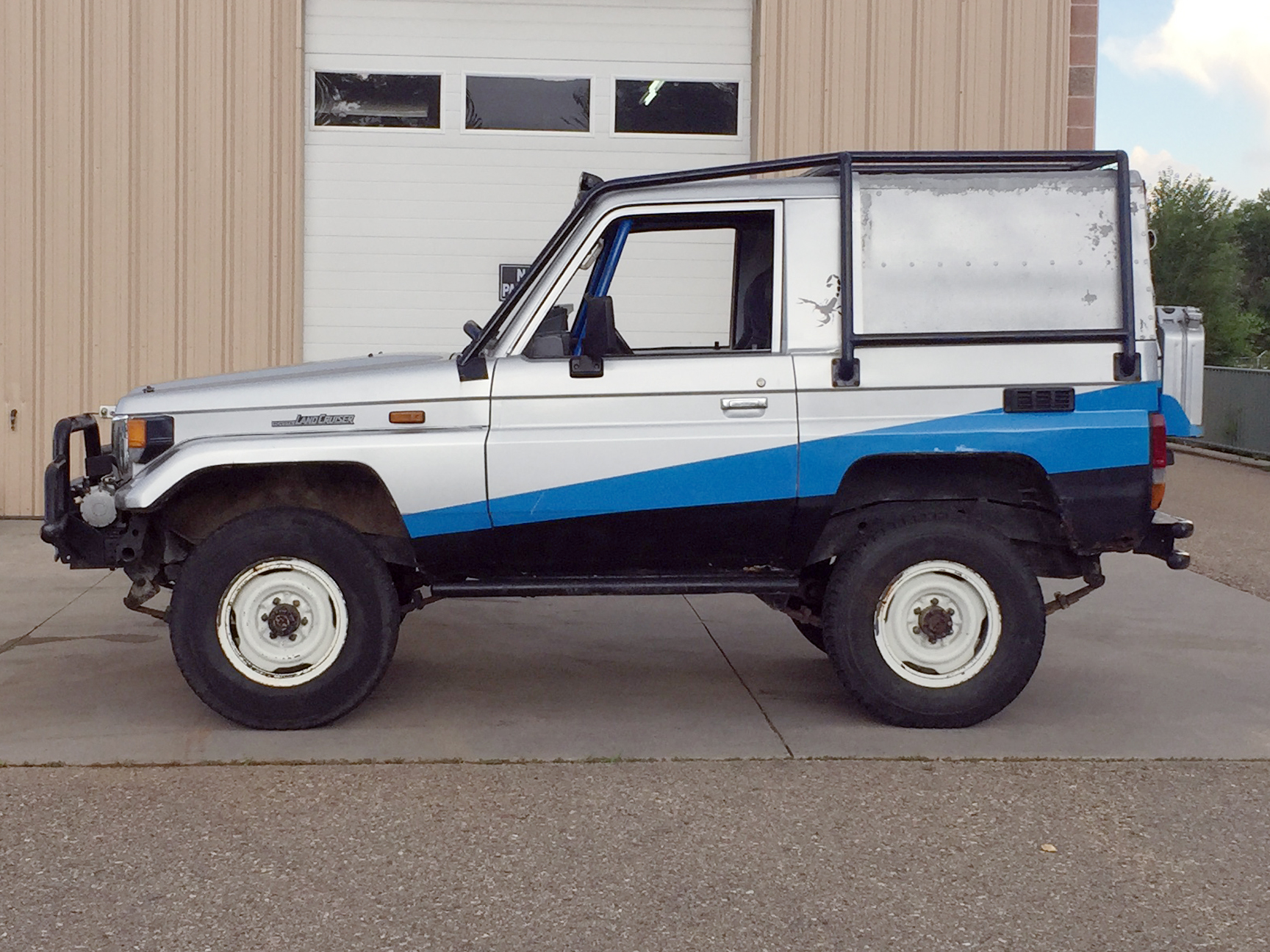 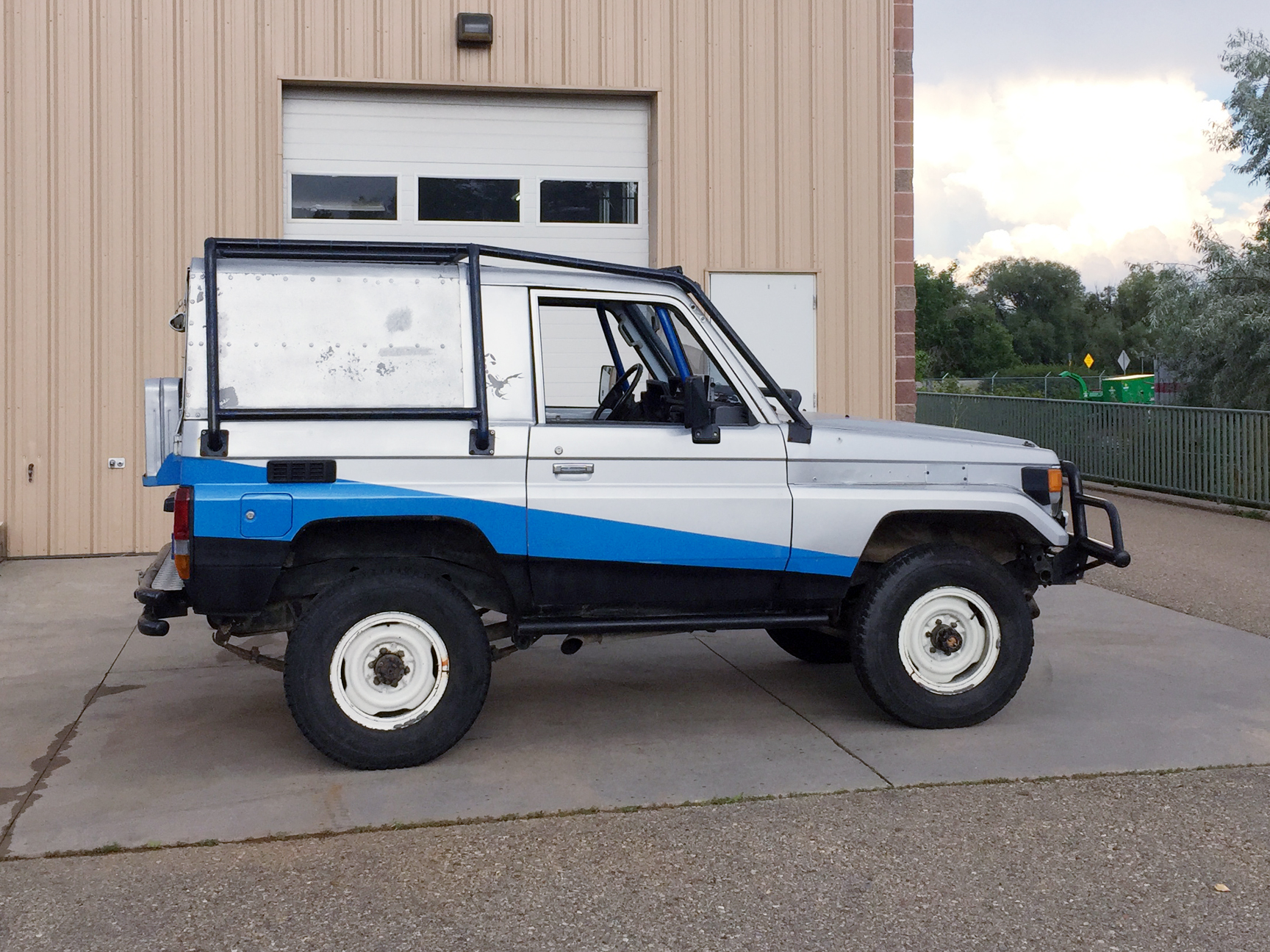 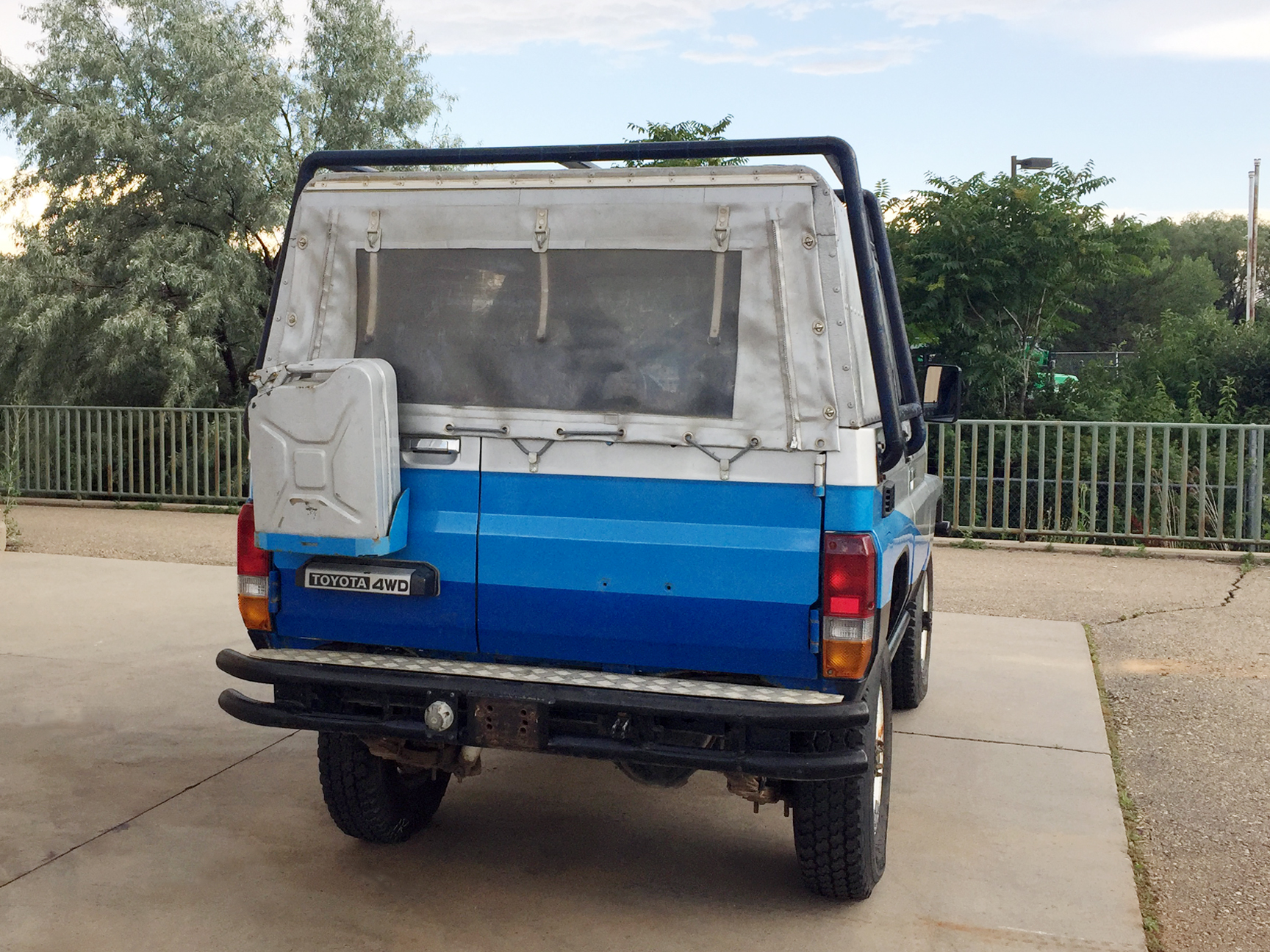 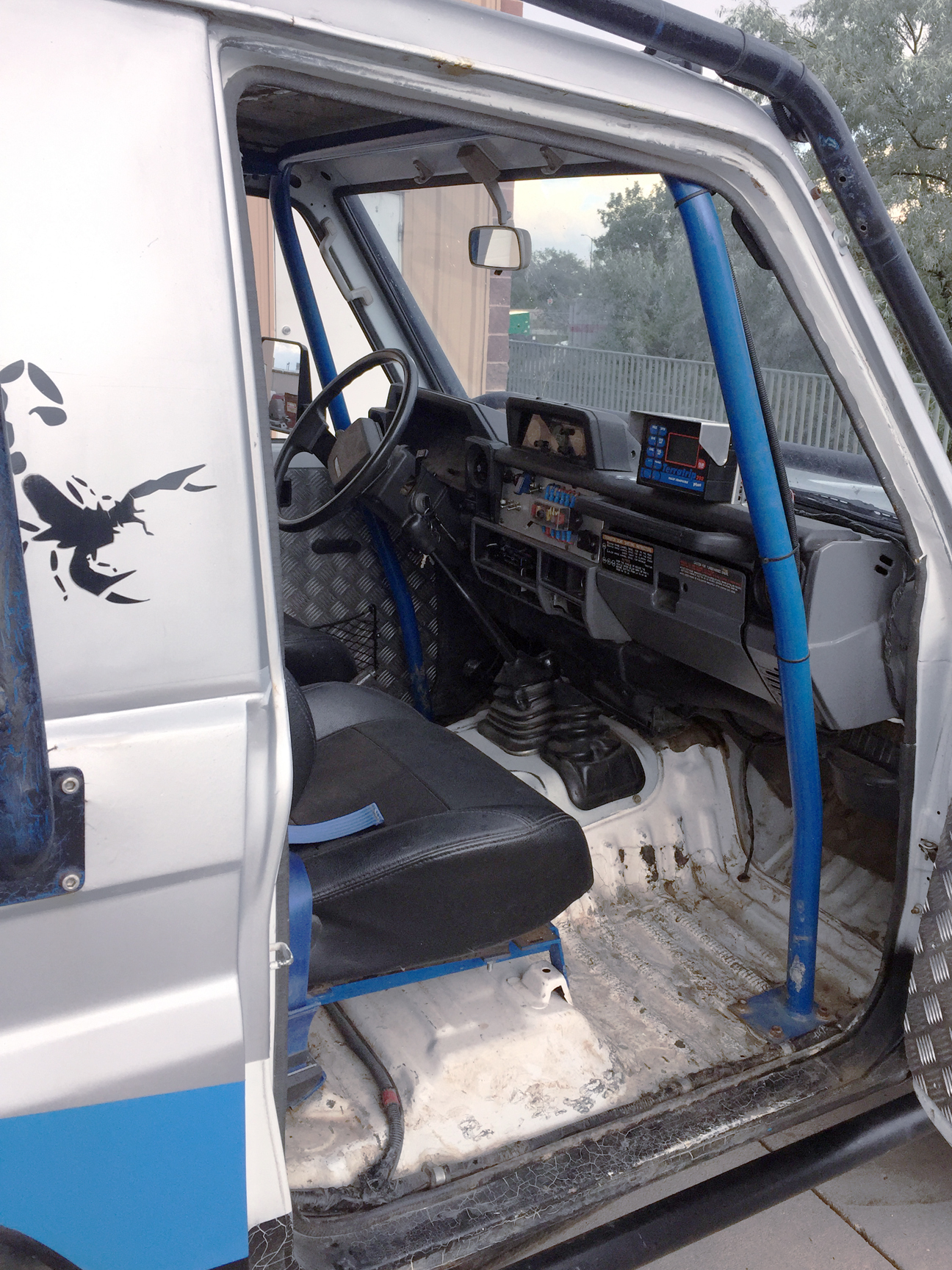 I've been asked if I'm open to offers. Yes, of course. Please get in touch if you're interested.

Just put it on Craigslist for $13,900, so I figured I should update here as well.

Sweet deal at this price!

Let's get this sold.

Complete still sitting in a 1988 BJ74 with extremely rusted out frame. Engine has 124 000Miles and runs great strong. Comes with H55 transmission and split case, keep in mind this has 24 volt starter and alternator. 6500 US 8500 Canuck. Was intended for a project that is not gonna happen. I...

And people "in the know" say that's a good deal:

Surely someone can pay $8500 for a running, driving, complete, left hand drive truck, with a rust-free frame, some useful accessories, AND a 13B-T + H55 showing LESS miles than the one advertised above!! Robbie at Adventure Off Road checked the compression on this one--numbers are good. Starts right up every time. Drives fine. It's just....special looking.

Honestly, I understand the mods might not be to everyone's taste, but c'mon guys, use your imagination! I really can't drop the price more. I'm already going to lose my shirt on this. Somebody throw a dog a bone. Lol.....

Surprised someone hasn't scooped it to build a crawler or something?

I kinda like that exo rack in the back. Seems like a decent idea for RoofTop tent on an FRP top. Not sure I like drilling holes into the side of a clean body though...

FJBen said:
Surprised someone hasn't scooped it to build a crawler or something?
Click to expand...

With a price now discounted over $6000 from the original ask, I figured somebody would've jumped on this by now. Don't get it. Someone please explain. Lol.....

It is a steal at that price. I am shocked.

Curious. Do you have this posted anywhere else? Ebay, BAT?

Had it on eBay for a few weeks. All I got was a Nigerian prince looking to send me a million dollars for it if I'd just send them the change via Western Union, and a mysterious guy who wouldn't say where he was, and didn't have any questions about the car, but was willing to pay me a ridiculously low-ball price, sight unseen, for the car. Nothing much came of that. If the mystery man is here on 'Mud, and he's reading this, hey, no offense man, but c'mon. This car is already a screamin' deal, no need to lowball me that bad. Bad form.

Also have it on my local Craigslist. I've had a few inquiries--some clearly scams or 'bots, mostly about things clearly stated in the listing. A couple of local guys have had some questions, which I've been happy to answer. Then they vanish....poof!

Listed it on a local 4x4 club forum. There's been some interest there, but no buyer as of yet.

And here. Most of the serious-seeming inquiries have originated with 'Mud. Guys here just know what these cars are about, and don't expect a 31 year old Landcruiser to drive like a new Honda Ridgeline.

Haven't put it on BAT. I don't really think it's that kind of car. If I were to ever sell my Troopy, I might think about BAT, but not this car.

Somebody's going to get a DEAL.

You can lead a horse to water but you can’t make it drink comes to mind here .

Awesome deal to bad most buyers lack the ability to use a bit of imagination or creativity to look past what they see in the pictures.

13BT/H55 combo’s are getting pretty rare and if I needed one I would snatch this up in a heartbeat.

Lol...not quite "Boom!" Still waiting to hear back from the guy. We'll see. Until then, still available.

Wish I had about $8400 more in my budget right now. This thing might look a little goofy (I actually like it better than all the bone-stock-with-giant-Toyota-factory-PTO-winch-bumper-and-tons-of-chrome JDM troopies that go for $30k), but for $8500 I bet it would be a lot more fun than a VW-swapped Samurai, and those go for that kind of money easily around here.

One of you nuts is going to crack eventually.
M