The truck has been running well since baselining the cooling system with a new radiator several years back. Recently and somewhat worryingly due to it being cool right now, I've been seeing the digital gauge run past the very standard 190 Fand sitting around 193 to 197. Been watching the overflow, which I'd noted some time ago was full. I thought maybe the tech did this last time it was in the shop, so wasn't worried other than maybe making a mess on a hot day. Turns out this issue was nothing to do with the shop visit, but was coincidental as it turns out.

I decided to pull the cap off the overflow tank today. I was pretty sure it used to have a siphon tube that went down into the tank, along with the line that connected it to the radiator neck for when it vents under pressure when the radiator cap releases it. So I pulled the tank and drained it into a bucket.

Sure enough, in the bottom of the tank was my siphon hose, which had apparently fell off the nipple on the underside of the overflow tank cap. I slid it back on the cap's nipple and it seemed tight enough not to fall off.

Does anyone know if that is supposed to have a small retaining clip or not? Thinking I'll put a hose clamp on anyway. 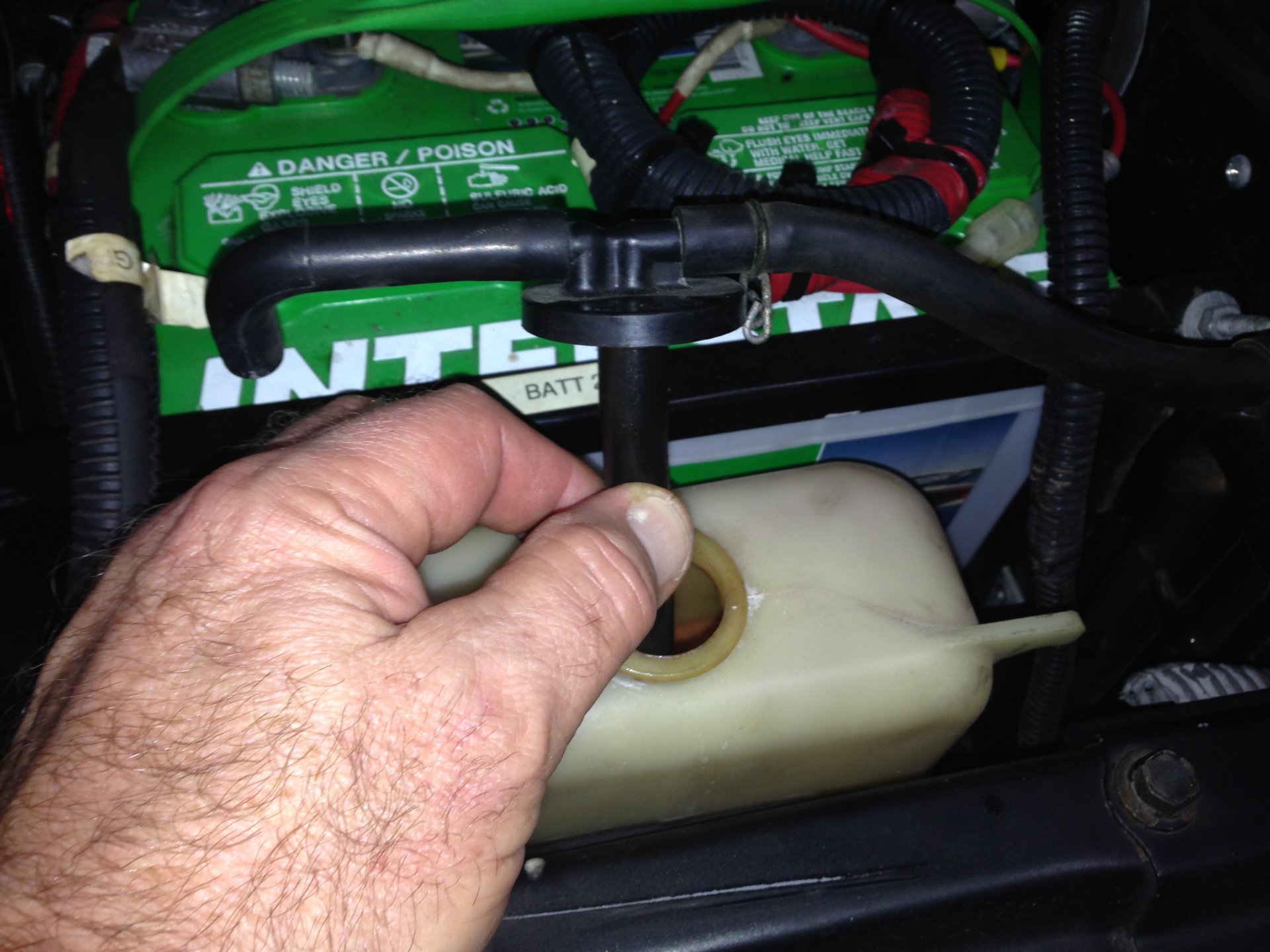 The effect was to let the overflow tank fill all the way, until it got to the nipple. The nipple then may have acted as a very short siphon, refillng the radiator, but only in part. By then, the radiator was cool enough to open, so I cracked the cap and looked inside. I had coolant up to the top of the fins inside, so things could have been much worse.

When I started refilling the radiator, I used what I'd drained from the overflow tank and came up about two cups short of the total. I'm guessing this is what I really lost overboard, but this sounds good compared to the other things this might be a symptom of that aren't nearly so easy to fix.

Wanted to bump this, as it's potentially such a widespread problem as our trucks age. The siphon tube gets stiff with age and may loosen, leading to this seemingly alarming result. Given our OCD about our cooling systems, this is good to know about as a problem to check on first as low-hanging fruit that something seems amiss.

Happy Friday, no clamp on my overflow hose.

FMC80 said:
Happy Friday, no clamp on my overflow hose.
Click to expand...

Thanks, that's good to know.

That does make it all the more likely that someone else will experience this same situation as things age and loosen.

That does make it all the more likely that someone else will experience this same situation as things age and loosen.
Click to expand...

It's definitely something I would not think to check without compelling reason; thanks for craniums up.

Many thanks for that heads up. No clamp on mine either. But I'll put one there this weekend.
You must log in or register to reply here.