When I learned how to weld, a portable welder was a Lincoln SA-200 engine drive in the bed of a Ford F 350. Since then I have had a variety of heavy welders, including a Lincoln AC225 Buzz Box, a Lincoln Ideal Arc and a Linde HeliArc HF250 AC/DC Tig / Stick welder. I bought an inverter thinking that it would be nice to have a more portable welder, but the Thermal Arc / Tweco / ESAB Fabricator 211i weighs 57 pounds after you remove the 30 pound MIG wire spool and MIG gun and disconnect the gas line. It is just a little to much to make me want to lug it around, so I was looking at cheap and light weight welders in the $130 - 150 range on Amazon a few weeks ago. Up popped this tiny 120 / 240 volt stick welder that claimed to put out 135 amps for $72 ( it is up to $90 now). It is the Tooliom 1355 and it only had 3 reviews and only one was detailed, but it indicated that it could weld with 3/32 rods on 1/8 inch steel on a 120V 20 amp circuit. The reviewer sounded like a welder who knew what he was talking about and he gave it 3 stars, so I bought one. It weighs about 4.5 pounds and 7.5 pounds with the leads, ground clamp and stinger

I tested on both 120 and 240 V circuits under a real world backyard situation on a 50 foot extension cord. Like the review noted, it is a little hard to strike an arc on 120V. You have to do a scratch start and a light tap or a peck and lift start just results in the rod sticking. Starts were a little better on 240V, but not by much. This is typical of low open circuit welders but I checked the OCV and it is 75V on both 120 and 240, which is right up there with my Fabricator 211, so that doesn't explain the difficulty starting. Still though, scratch starting is not that big of a deal and it could run 3/32 6013, 7018 and even 7014. It could even run 1/8 7018 on 240V with the amperage set to 135, but it seemed cold, like it was actually 115A or less. For some unknown reason, I could not run 3/32 6011 rod unless I turned up the current so much that the rod was red hot half way through. Maybe it is the off brand US Forge rod that my local steel supplier sells, but I don't particularly like 6011. Maybe it is because of all the 6010 rod I had to burn in welding class.

The bottom line is that while it is small, light weight, cheap and it can weld, this is probably not the welder you would want to learn stick welding on using 120V because with the difficulty starting. The best way to use it would be on 240V using the adaptor so you could run it with a 100 foot 120V extension cord. Just remember not to plug your angle grinder into the 240V. 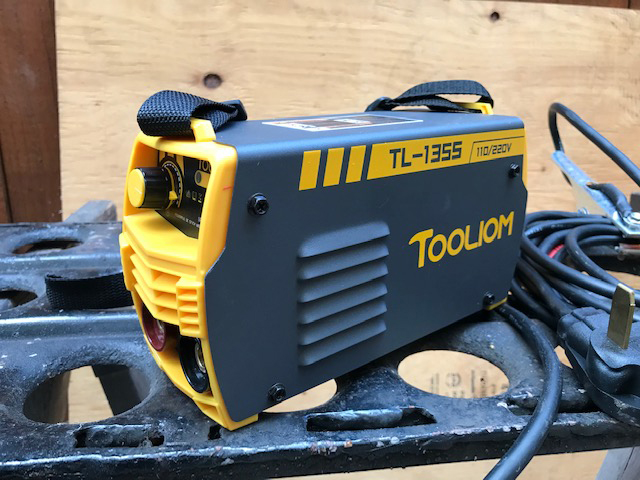 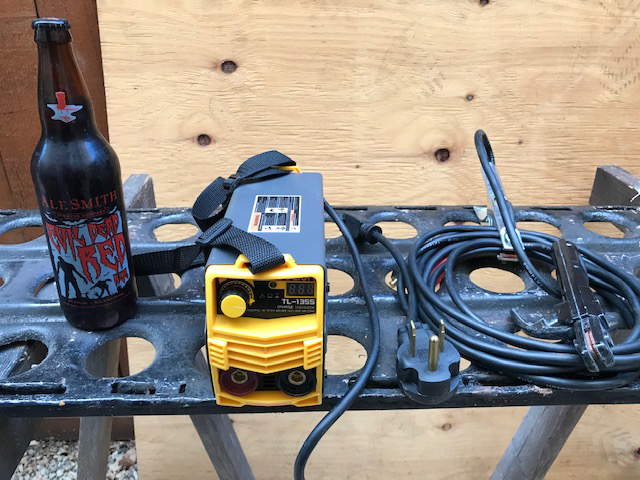 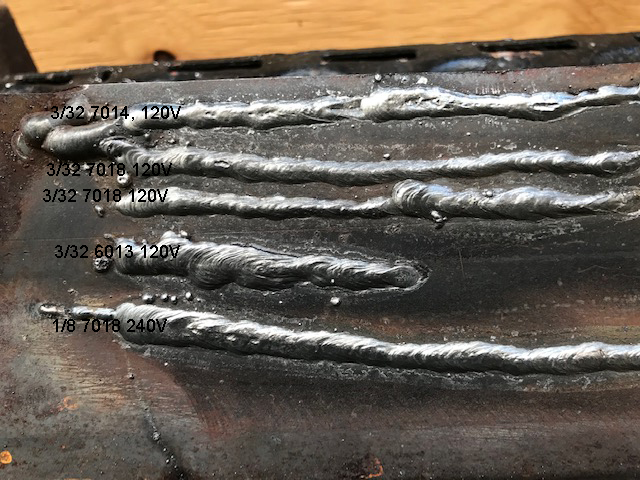 wow that is barely welding.

it's not cheap, kinda the exact opposite to be honest, but of all the millers we have, one guy has some version of a maxstar that i used to do an emergency pad weld job on the top of DA tank.....i ran it on 110 for about 2 hrs running 3/32 7018s on what was supposed to be a 0.375" shell. i was running it fast as i could toss the stub and reload at around 90amps...it floored me. i thought i was going to be fighting it the whole time....nope not once. it lit the rods like i was feeding it 3phase 480v, didn't trip the breaker once..the only thing i noticed was the arc wasn't as smooth as if i had given it more input power. it's also a tig power source.

I had one of those ESAB 211i units in my shop at school, they do weld really nice, I liked it. But, as you say it's big and heavy, and honestly I don't think it's up for the rigors of being moved around much. I think it's more suited to be parked on a wheeled cart in a shop, with a bottle attached. I also had the TIG gear for it and it did well.

I also had a couple Miller Maxstar units, really nice and compact for a stick unit, but definitely not cheap.

After I figured out that the meter was lying to me about the amperage, I fooled around with it a little more on 240V to see if I could get it dialed in better and see if I could hit its duty cycle limit and make the magic smoke appear while it is still on warranty. I also tried running it on a 100 foot 14 ga extension cord. I ran mostly 7018 because I have a lot of it. I got 5, 5-pound boxes of Lincoln 7018AC on the bargain table at the big box store for $1 each. I don’t like it because it is hard to see the puddle under the thick slag and it has porosity no matter what I do. I also ran some Washington Alloy 7018 for comparison. It is the stringers without the porosity. So it turns out that 105 - 110 amps on the meter is about right, corresponding to 85-90 amps. It didn’t seem to matter whether I used an extension cord or not, so it seems that 240V has enough power to run it even with a voltage drop with the extension cord.

I ran one rod after another pausing just long enough to knock the slag off the stringer above and I thought I finally had hit the limit when I went to restart a rod and it wouldn’t spark. It turned out that I didn’t do a good enough job of knocking the slag off the tip and after I scratched it on the concrete, it took right off again.

I still had a hard time running 6011. If the arc was a little to long or too short, it would snuff out. It was acting more like running 6010 on an AC buzz box. Maybe it is the off brand 6011 from US Forge that I got at my local steel supplier. I will have to try Lincoln and see if it runs better. 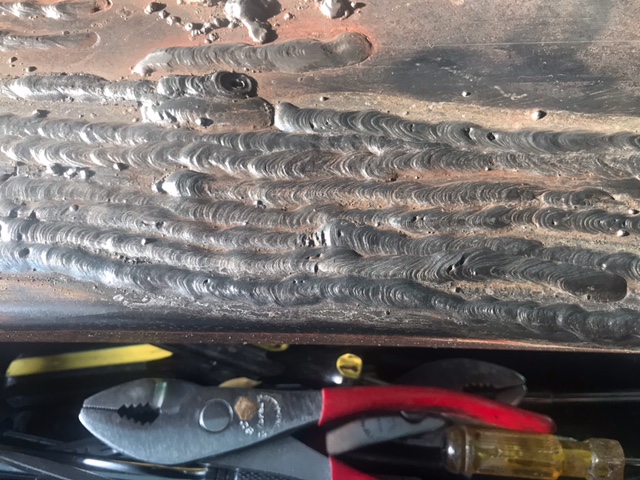 moving too quickly. ripples should be U shaped not V shaped.
You must log in or register to reply here.

Noob searches for and buys a welder
2