So I was looking for a photo of the Porsche SUV to make fun of it in the metrosexual thread, and on the Porsche site, they are introducing a new vehicle, the Cayman S.

Anyone know anything about it? It's 0-60 time is 5.1 seconds, which isn't too bad, and it's mid-engined, but it looks like it could be another one of those low-end, pedestrian cars like the Boxter (needless to say, I don't care for it much) - Anyone remember the days when Porsche built things like the 959 or the 930? Now it seems like all they are doing is competing with 350Zs and Miatas. Or am I wrong about this Cayman S, and it's really a bad-assed little car?

man that is one sweet looking ride. Me likes long time.
B

I try not to look at the new porsches, they make me feel financially inadequate

swank60 said:
Anyone remember the days when Porsche built things like the 959 or the 930?


what about the now legdenary 962?

I'm still a little shell-shocked from the last gen 911 - sceptical, I suppose. The one they built in the 1990s was so girrly looking. Blah. Looked way too much like the Boxter for my liking.

That said, this new model is sweet looking. Everything from the door line back is some of the best auto design I've seen in a long time. I like that it's mid-engined, too. I'm just wondering just where this thing fits. Is it a performance car, or is it one of those cars that LOOKS like a performance car. Or is it just the Toyota Highlander of the Porsche lineup? (I kind of feel like the Highlander was more of a market response, fishing for sales sort of vehicle...)

you don't like this? with new shoes boxsters aren't that bad.. 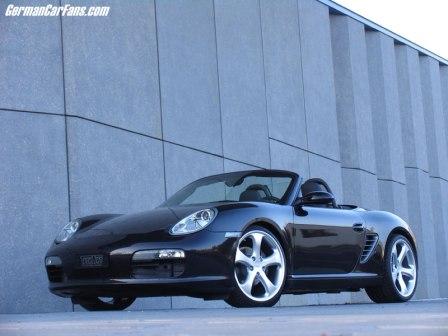 tea LC said:
you don't like this? with new shoes boxsters aren't that bad..

Nope, don't care for it. But a lot of that is who I see driving it, too. And though the lines look good from one angle or another, next time you're in your Cruiser and come across one in traffic, look down at it from that angle. They're a little uninspired, IMO.

i don't like boxster simple because their affordable....would rather have a 914.....
L

that is actually a good agrument....finally
B

I don't care for boxsters either...probably for the same reason. The rear end is pretty jacked up to, IMO -- they could've done a much better job with the rear.

Yeah, I would too, if I could find one. (Oh, and had the money to blow on one)

I'd like to see one of these Caymans up close though.

I think the Cayman S is essentially a new Boxter Coupe; a non-convertible Boxter, in other words.

They went with a different name, though, because they will be priced between the Boxter and Carrera.

That's what I'm thinking...It's just now hitting me that the Boxter is mid-engine also.

I think it is a really nice car. I don’t think Porsche is trying to take part of the market of the 350Z or Miata or compete against it because the car cost twice as much as any of the other two. I think they are going for a sector in the market they haven’t target in previous years. The Cayman S is pretty much a Boxster S with a more powerful engine and coupe. I know a lot of Porsche owners that have a 911 for the Autocross will be considering this car! So far from what I have read in the Porsche forum the car is getting a really good response!

996's 1999-late 2000 my cars are not that great they had a 3.4 liter engine that had some issues, although once m/y 2001 rolled around out came the 3.6 liter moter that is overall much nicer and also lets not forget the turbo (engine block based on the same block found in the 962 and gt1) as for the 914 don't discount these litte cars they are way more robust than you may think, suspension is basically a beefed up 911 suspension of the same era (lighter car with a stronger suspension go figure) the rear control arms/ bannana's are massive compared to a 911, all a 914 needs is a big motor and some upgraded brakes to beat your ass @ the track, there balance is impecaable and they have the ability to really hassle some big powerful cars! As for the bad ass 930 generation of cars 1984-1989 usa M/Y's they are all that but they will bite hard if you are not carefull, As for the boxster/cayman not being real porsche's I defy you guys to find a car with similar stats that will got straight to track and lap as long and as fast as that car will right out of the showroom. it does not exist. there are fastr cars but none do it all as well as the boxster please keep in mind that the puny $56,000 boster "s" killed the $625,000 ferrari enzo thru the 700 ft slalom! pretty impressive for a pedestrian porsche vs the pinaccle of italian wheelbarrow's
in short every car has it's strong point and every car has its weak point but for ease of ownership and reliabilty in aggressive driving condition (read as track driving or outrunning your buddy on his R6/R1 yamaha look no further than a porsche 911 turbo albeit slightly modified)
I love those stinkin cars
You must log in or register to reply here.
Share:
Facebook Twitter Reddit Pinterest Tumblr WhatsApp Email Link