I thought I would post up my smog history in a new thread. I'll use this first post to share results from my biennial smog check results and update the table every two years. Recently I have been dreading the smog check because I had it in my head that I was borderline failing. Today I realized those results (HC at 15 MPH measured at 125) were from six and eight years ago. Recently I've been doing much better...not sure why though.

I had what I think was a strange interaction with the tech at Walnut Creek Smog today. I was expressing my concern about not passing, and he was asking "what do you have to do to have them not pass?" I know from this forum there is a lot that can happen to cause a failing test. It was strange to me the tech was apparently so optimistic about the test. Maybe this thread can pass along some of that optimism. I feel the anxiety every two years, but in reality of the 15 test periods, I have only failed two. Success is more likely than failure!

I purchased this truck used in 1998. I guess I must have gotten the smog results from the PO for 1993, 1995 and 1998. Early on I must have gone through and replaced the vacuum tubing with silicone tubing from McMaster-Carr. I remember finding some tubes with holes notched in the underside of the tubing . In 2002 I had some trouble passing. Long story short, I installed a new CAT and re-manufactured air pump and rebuilt the carburetor. The successive failures during that time all show low O2 so the air pump was probably a factor. In 2008 I failed the EVAP pressure test. I replaced the soft tubing associated with that system.

California switched to a dyno test around 2004 I guess. However, in 2010, whoever I took the truck to thought the truck was full time 4WD and didn't use the dyno. That year was the only time that happened to me.

2022 Test: in preparation for this test I changed the spark plugs. They were pretty fouled, more so than I ever remember them being, but I don't remember the last time I changed them--it's probably been several years. And, I haven't really been driving the truck much--mostly short trips. From the 2020 test to 2022 I only drove my truck 527 miles! And my speedometer/odometer reads a little high because of my tire/differential combination. (Somebody convince me I should sell this truck because I'm not using it!). 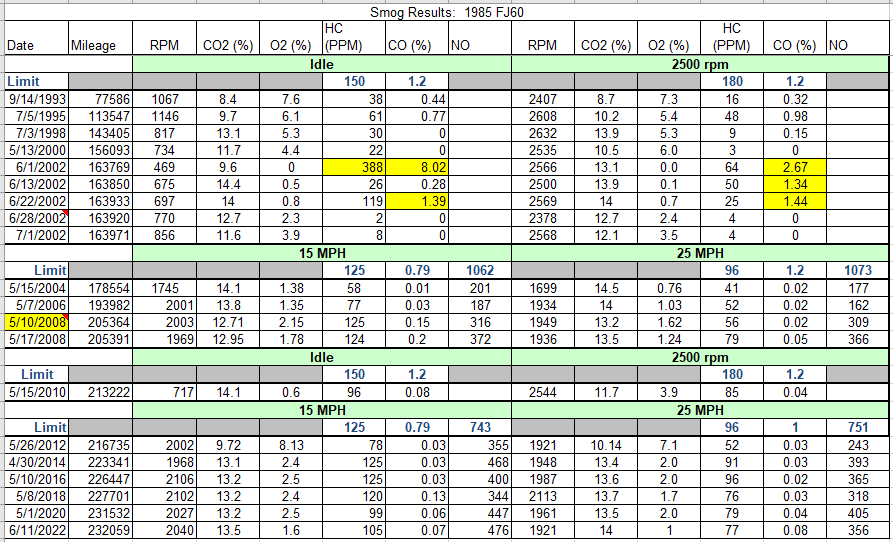 2mbb said:
the tech was apparently so optimistic about the test.
Click to expand...


FJ60 owners that need to pass smog tests pretty much live in their own bubble universe of dread.
There’s very few 35 year old vehicles left on the road today with carburetors and I’ll betcha your smog tech essentially never sees a vehicle fail. Doubt he ever tests another FJ60. The FJ60 is an outlier for sure.
I’ll agree with you on the smog test stress factor. Back in the 90’s I never thought twice about getting a smog test, but as the decades rolled by and the car began to disintegrate, I became more & more paranoid before each test (since it was my only vehicle).

Some of us have only one vehicle- the FJ60, and if the DMV says we can’t register it because we can’t pass a smog test - we’re royally screwed because no new emissions equipment is available anymore, except for a CAT and a rebuilt air pump.

This scenario (single vehicle with not enough funds to purchase another car and living in CA) is literally living on the edge - flirting with disaster as the 40 year mark approaches. That’s why I always recommend to newbies to have a FJ60 as a second vehicle, not the one and only - if living in CA.

Interesting how your O2 numbers vary, occasionally popping up very high -- Usually I see if it's in the 2-3 % range, it's an easy pass.

Wonder if you have a wonky check-valve into the air injection rail.

Do you get Winter/Summer gas blends in your area?
=TOYOTA=​

Spike Strip said:
Interesting how your O2 numbers vary, occasionally popping up very high -- Usually I see if it's in the 2-3 % range, it's an easy pass.

Wonder if you have a wonky check-valve into the air injection rail.

Do you get Winter/Summer gas blends in your area?
Click to expand...

I live in the San Francisco Bay Area at about 300ft elevation. I am not aware that we get seasonal blends.

I did change both AI check valves when I had the failure in 2002. I'm sure I found aftermarket check valves at Rockauto or the like. It's been 20 more years now. I suppose I should check those again.