I need to make a tool to press the bearings off of my Tacoma's axle shaft. I don't have a spare minitruck or tacoma housing, but I do have a spare FJ60 rear housing that I can cut up to make a press tool.
Any clue if these are the same pattern? A quick measurement with a tape measure looks like they might be but I was trying to find a definitive answer.

It's not the same.

Also, this design is ridiculously stupid.

Not sure which design you think is stupid?
Frankly c-clip axles are a shyt design (and weak comparatively) . The mini truck semi float is uber strong.
The bearing job is gravy with the tool.

gnob said:
Not sure which design you think is stupid?
Frankly c-clip axles are a shyt design (and weak comparatively) . The mini truck semi float is uber strong.
The bearing job is gravy with the tool.
Click to expand...

The land Cruiser full floater is better IMHO. Can be serviced without a press or SST.

I'm very seriously considering having a custom 1 ton full floater made to replace the rear end.

Only money really required is a press. Even then, tge bearing can be charged without ANY special tools.
Are FF better, sure. But at what cost?
You going to blow 2k trying to save 60?

I dont know about this $600 in tools buisiness, i changed my tacoma bearimgs with a simple press and one of those two piece bearing plates

You can get the inner race off of a Toyota C clip axle by welding a bead across it and quenching it in water. It will shatter like glass.

I did the rear bearings on my T100 (same axle design) The first tool I built was too light, ripped out the welds. Made a much heavier tool, pretty much identical to the OTC and such tools you see. That did the trick. I used heavy flat plate, matched the bolt pattern on the back of the bearing retainer, cut a large hole in the middle. Super duper wleded some 3 inch pipe to that that, then welded some channel on the end of that with a hole through it that would slide up through the press and turn to hold it. One side was like a rifle shot going off when it let go.

I watched the youtube vids and stuff. I tried the BFH approach, the beat the axle on a wood block approach, the drop method, etc... All it did was hurt my hands and bend the brake backing plate all up. As I said, after that one let go with so much force, there was no way I was going to get it without a press. I did it with the cheapy HF 12 ton model. I think I had to take the bottom spreader off to get it in the press.

I don't know if it is a bad design, my truck had 250K+ miles on the rear bearings and they weren't really fried. I just did them as preventative, they probably would have lasted a lot longer. My FZJ80 on the other hand, bearings were never touched for 130K miles. Bearings were crap when I took them out for service, seals gone, oil all over. Was on a time budget, so I repacked what I had and put it back together. Tore it back down last summer and replaced the bearings, but the fretting wear on the welded spindle of the housing is a real issue now at 180K. New bearings helped, but I still struggled to get a good preload on the worn spindle. I actually used the punch trick and dimpled the bottoms and sanded them down till the bearings fit tighter. Repairing that takes a new axle housing. I wish those spindles bolted on like the fronts, that would be better, but not as strong.

Pin_Head said:
You can get the inner race off of a Toyota C clip axle by welding a bead across it and quenching it in water. It will shatter like glass.
Click to expand...


This is not a C Clip axle (that would have been easier to handle, as I own the appropriate tools to service it having had an FJ40 for 20 years).

A 20 ton hydraulic press is now in my shop and I am modifying a HF tools bearing tool so if I ever have to do this again, it's going to be an easy in and out deal.

I highly reccomend that you remove the Tacoma axle all together and install a FJ80 housing with a 100 series 3rd with nitro full float chromoly axle shafts. You won’t have to deal with that problem ever again haha

I made some tools out of pipe fittings from home depot. They worked fine for wheel bearing and seal replacement on a 99 4runner and an 02 tundra.
These fittings are very inexpensive. The fitting that mounts to the backing plate did break once during axle shaft removal, but I was in the middle of the job so I just went and bought another fitting. The metal is low quality cast steel alloy so the break was a slow motion "tear" and not a catastrophic failure where metal bits flew all over the place. 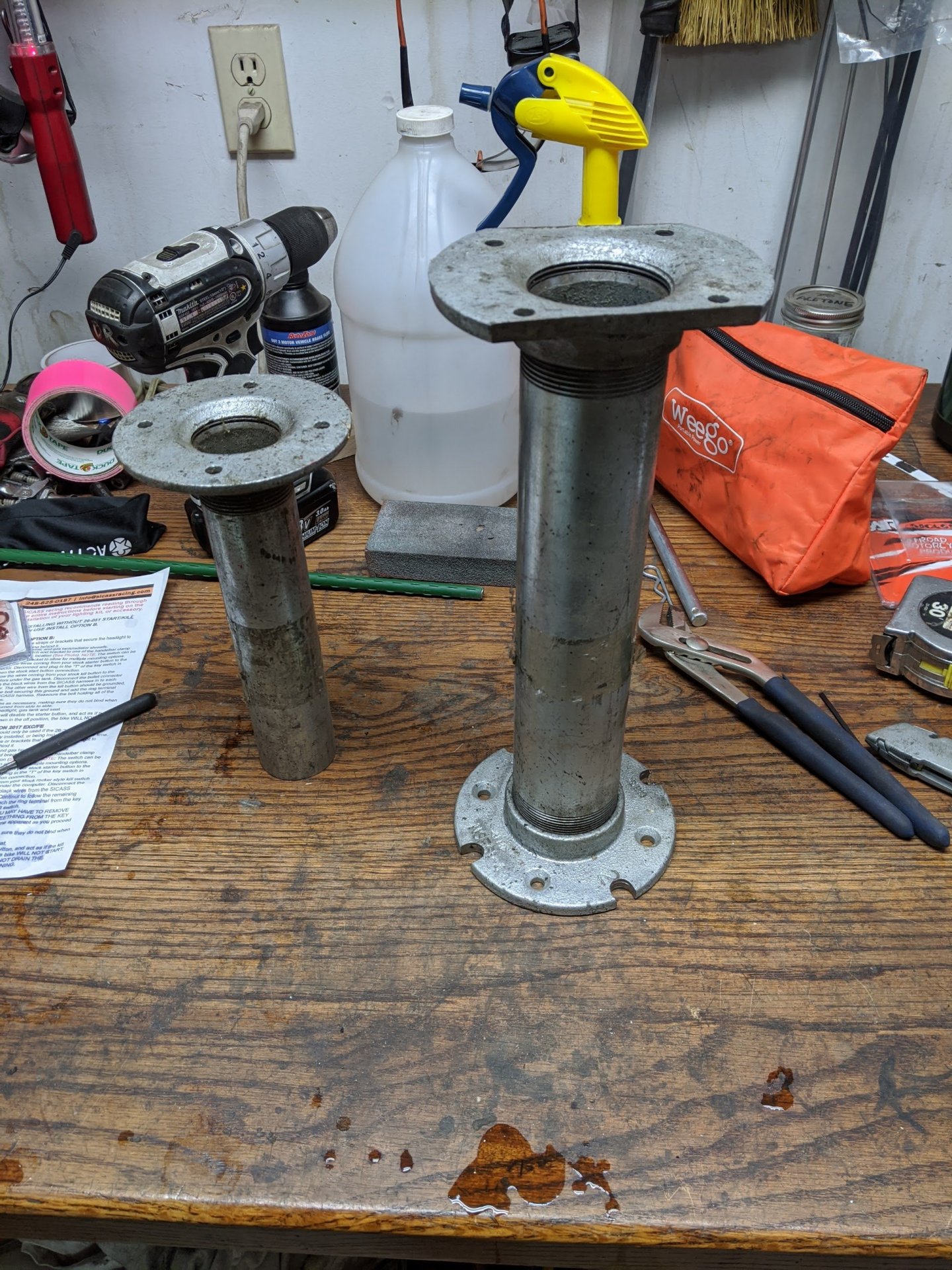 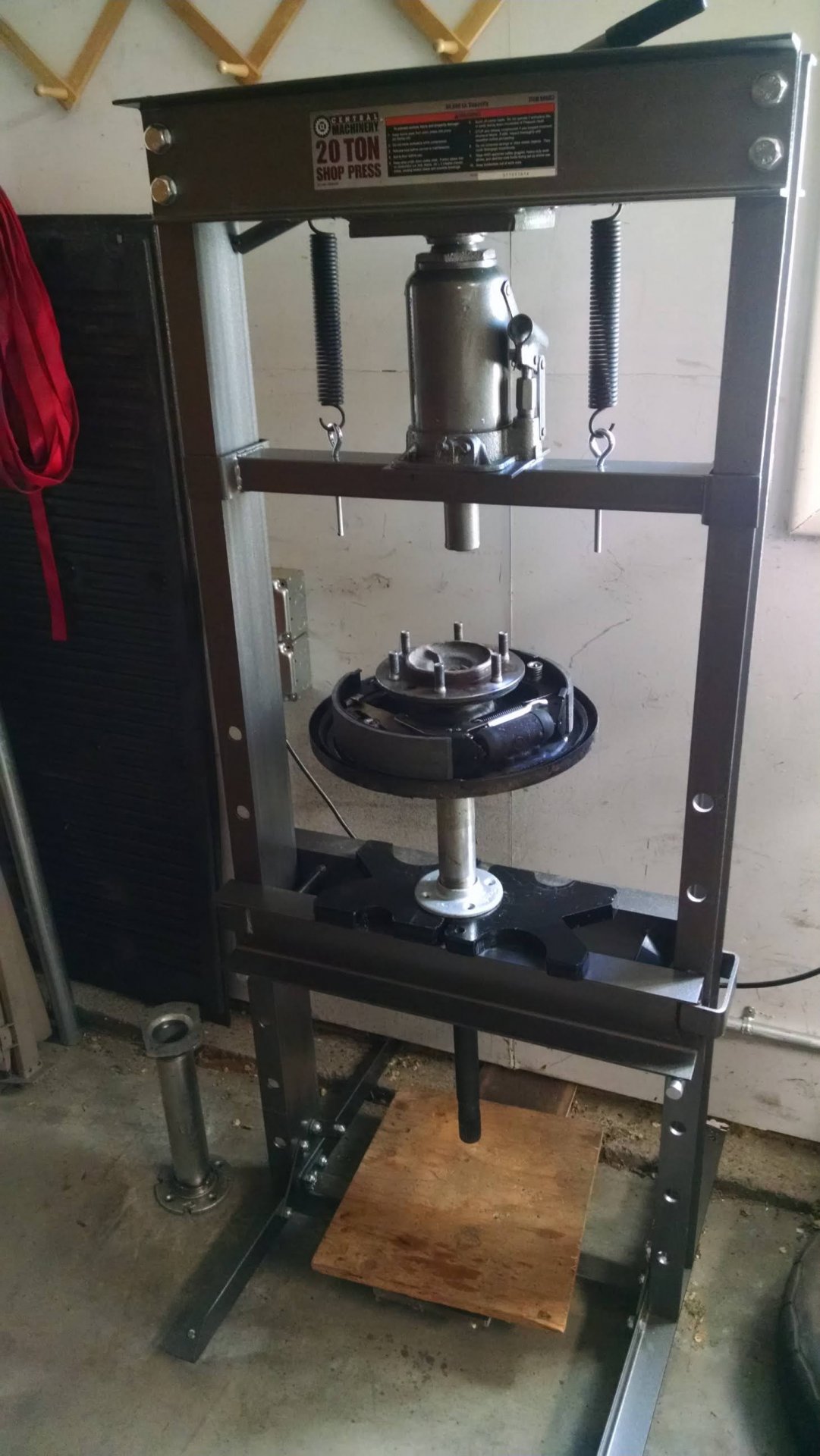 Stuck in Reverse Shifter in Neutral

who has pressed a new bearing on the slip ring side (back) of the 130 amp alt?