I was going to go the 14mm socket on the driveplate to hold the harmonic balancer/crank pulley from moving when removing and replacing my crank bolt.

I borrowed a tool from my mechanic which is an impact wrench type thing. Its basically a thick 450mm long bar with a swivel piece of steel 150mm long where a 1/2" 30mm socket fits on the end. He uses this for cranks and it's hit with heavy a dumpy hammer. I'm a bit scared that the impact could damage the 14mm bolt, driveplate or something else.

Is chaining the harmonic balancer a better idea in this instance, or the 14mm fine? I don't know enough about the driveplate workings.

Thanks all, I will make a photo journal of my work and tools used tomorrow.
He lent me a 55mm socket for the wheel bearing I did this afternoon, repacked the bearing while I was there and no more wobbles. A metal puller bar thats hit with a hammer in place of a puller in case the balancer doesn't come out by hand, a dumpy and a 3/4 concaved socket wrench bar for the 55mm socket. Was very good of him to lend them to me.

never heard of such a tool.
Eat your wheaties for breakfast and put a pipe on that 3/4 bar and pull away.
I do not know about the other tool I do not think that I would use the 14mm socket with that type of tool I would either chain it our use landtanks method of wrapping rope around it and then the frame.
Wrappingthe rope so that when you are pulling to loosen the bolt the rope gets tighter.

Just put the bar on and bump the starter. problem solved.
K 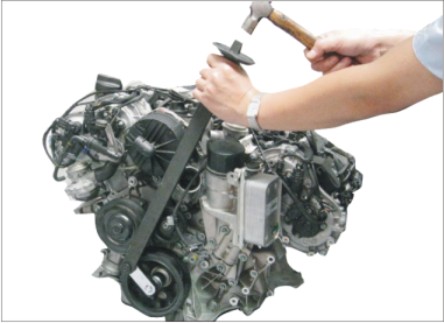 KliersLC said:
Just put the bar on and bump the starter. problem solved.
Click to expand...

Yep thats exactly the tool, except the hammer is about 10 times bigger, a mini sledge
I only have a 1/2" breaker bar

Will be starting in 30 mins, hopefully I can figure something out.
You must log in or register to reply here.