any opinions on this shackle reversal 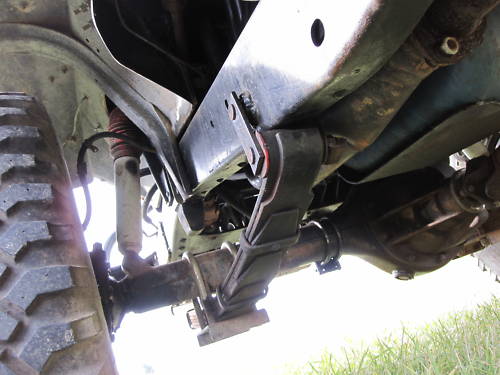 Visit site
I really no nothing as for I am new to this site, but that dont look like it has much room to move if needed.

I would "guess" you need a longer shackle. and probably an easy fix

im a cheap person regularly (and im a broke college student) id still find funding to fix that.
any pics from up front?

Visit site
no pic of the front. The truck is about 100 miles from me and I'm trying to decide if I should go check it out. The current owner seems pretty clueless, stating the truck is stock when there's a bunch of things not stock. I worry that if the reversal is done that poorly, how's the saginaw conversion. Is that even safe to have just the bolt run through the frame like that? I'm sure the ride is poor with out any clearance and also missing the bushings. Should be an easy fix, just find the spring perches and weld them on. Like I said, just don't know if it's worth the time. Probably everything done to the truck has a hoopti slant to it.

Show us ALL the pics you have of the the rig. If the whole thing is as bad as you say it may not be worth it depending the price on it. If you are looking for stock, I would move on.

La Crosse FJ fan said:
. Probably everything done to the truck has a hoopti slant to it.
Click to expand...


listen to your self

even the bolt connecting the header to the exhaust pipe looks funny.

Unless you want to replace everything and his price is cheap enough.... i would bet on everything needing to go, from suspension to wiring.

Visit site
That SR will need to be completely redone. The spring is resting on the frame. How is that ever going to work?

It's the wrong shackle for the bushing, the welding is poor, the brake line is not stock and looks hacked.

It looks like some broke college kid hacked that together. Always a bad thing.

Anyway, go see if cheap. Avoid if not.
F

Visit site
The shackle is already at its maximum travel and I presume the rig is just sitting there. Flintstones suspension. Sometimes crappy work like this can be a good way to get the price down. Send more pics, there are some sharp eyes here.

nothing wrong with running a bolt thru the frame, as far as the saginaw i cant see it

Lil'John said:
Shackle looks stock but it can be "fixed" by using a shackle that is 1" longer than stock.
Click to expand...

Agree-but it isn't wide enough for that bushing and will cut into and ruin the poly bushing.

Visit site
It's on ebay:

He's had it on before, never reached reserve. The frame and body look ok, which is a near miracle in this part of the world. It may be worth the time to go out and look, but I don't think it's worth more than 4k

zrheard said:
even the bolt connecting the header to the exhaust flange looks funny.
Click to expand...


Looks like a wheel stud and a lug nut to me.
F

Visit site
From what have seen around 4k sounds right. The dash/interior sure took a beating. It is fairly complete but it looks weird( BLA Brown). If you have to paint it, well???? I know I would.
Last edited: Apr 13, 2010

Visit site
the bezel in on right side up so that's got to be worth something.

He's had it on before, never reached reserve. The frame and body look ok, which is a near miracle in this part of the world. It may be worth the time to go out and look, but I don't think it's worth more than 4k
Click to expand...


seems like alot of work. Trust me. If you plan on restoring that vintage, I am quite sure most of those parts are "discontinued".
You might be able to part it out, with the jump seats, and other bits.
That spring situation looks very odd. Looks like the Maf header, not too sure tho. It would cost me about 15k to restore that. Plus the diamond plate rear sill and quarters. Bad sign there.
Undercarriage(body) rust is on the verge of bad.
Let me know, I may have to go up that way soon.
good luck.

i was also leaning toward lug nut


miker said:
the bezel in on right side up so that's got to be worth something.
Click to expand...

"I will not ship,haul,or drive this anywhere you will need to make all arrangements." what a jack ass.... i wouldnt give a guy my money that wouldnt even have the damn common courtesy to drive it down the street to a place to have it loaded up for shipping. its not like he is doing anyone any favors by selling his old painted over cruiser, though the rust does not look bad to me... id like to check it for bondo b4 i spent anything over 2k for it
i was going to say something nice about the top but look @ the picture of the barn doors opened you can see where it is bubbled under the paint and it looks like the bottom of the barn doors are pretty rusted (he did not photograph that or mention it and theres no way he "just didnt see it" so he is not being 100% honest) 9 times outa 10 diamond plate is covering rust, even if it was put there to look cool it traps water and causes + accelerates rust he cut the rear cross member to put those lights in. the diamond plate under the barn doors does not look flat so i bet there is spotty surface under that (lots of rust) looks like at some point someone just shot the frame with flat black paint
the picture of the back driver side tire (the sideways one) what is that hump just to the left of the pumpkin (top center of picture) that glass pack looks like it has some more 1-off custom welding. someone freshly painted that cross bar.
the front (and probably rear) fenders have been cut
why the rocker guard in-lue of the stock steps (i know why mine are gone and thats b/c mine were beat to s*** and back)
rusted bolts holing on the front bumper (also they are too small and have no washers i doubt they are grade 8 again cutting corners)
the picture w/the headers: mid right thats alot of home done crampon wiring also pictures looks like a vacuum line that leads no where
is there a handle on the lift gate?? i cant save pictures off e-bay to blow them up... it looks kinda flat to me

cant really tell though
in the picture of the e-brake more home made wiring and expansive use of electric tape, is that an exhaust pipe??
tcase looks nice and clean though
one windshield wiper and one rear view mirror
the picture of the rear drive shaft taken from the driver side facing passenger side, lots of rust, why no mirror image? more rust on the driver side??
in the back most part of the cab (where the barn doors would be when closed) looks like a lot of painted over rust. also looks like a lot of rusty crap was stored in the back. (not a BIG deal... just one more thing)
the power steering lines look like they were bent by hand which leads to more crimping and bender tools are what 15 bucks??
and ill end here, picture of the steering wheel, you can see 4 different colors around the door the stock blue, the current brown, theres also black and gold?? but id bet that was just rust....
ok i cant not mention this since im pointing out everything i see where he tried to save a buck a towel in place of a shift boot?? he couldnt spring for a shift boot?? ill end w/a quote i got from a mud signature "the worst thing you can do is 1/2 thought out mods, that are under funded and never quite get done they will ruin your cruiser and your next owner will curse you and all your children"

Visit site
I'd bet that this guy has done almost none of the work on this cruiser and he bought it in this exact condition. He probably doesn't know what is and what is not stock or modified. If you are looking for a trail/hunting rig or planned to do major modifications anyway then this might be a good starting point for the right price. If you wanted a stock 40 or one which would be good starting point for a restoration, then this is not it. Keep looking.

miker said:
I'd bet that this guy has done almost none of the work on this cruiser and he bought it in this exact condition. He probably doesn't know what is and what is not stock or modified. If you are looking for a trail/hunting rig or planned to do major modifications anyway then this might be a good starting point for the right price. If you wanted a stock 40 or one which would be good starting point for a restoration, then this is not it. Keep looking.
Click to expand...

T
Any Mud members from Colombia

Saturday at 7:16 PM
Living in the Past

Any recalls on the FJ40?

Any review of the Cruiserparts 4 speed conversion kit?