ANOTHER rear heater issue/question on an 88 FJ62. (1 Viewer)

Having been gone for a little while, I decided to come back with another question - this time, the rear heater.

Some background:
Over the summer, I pulled my front seats, cleaned and restored the tracks and regreased them but before swamping the driver side with the passenger, I decided to pull the center console to remove the cup holder that would be in the way with the swaped seat. I put the seats back in but left the center console heater unplugged and enjoyed the "Seattle Summer" we had.
A month ago, I got the radiator flushed in anticipation of what I think will be the "polar vortex/global cooling/global warming...et all" this winter and now my front heater blows NICE and warm/hot. So last night while football was on, I reconnected the rear heater, got some gas and drove it around hoping NOW the rear heater would also blow warm/hot air. Alas, I only got a trickle of what felt like heat.

Not that its a big deal, but if I wanted to get heat to the rear, is there something that should be looked at? Is it a possible core problem in the rear heater and if so, is it separate from the one in front? The coolant lines coming from the engine appear fine although somewhat corroded in a couple spots. I did notice the heater itself was warm to the touch when I removed the console to see if everything was indeed plugged in and good. I researched as much as I could but found nothing specific to my issue.

Any tips or suggestions is appreciated.
James

Is the rear heater fan blowing Lo and High?

Seems both high and low work although there doesn't seem to be much of a difference.

On a side note: this car sat for a LOOONG time under trees in the PNW. So I don't know if that may have anything to do with collecting debris or if its clogged as a result of this.

The only way for the rear heater fan to collect debris is from trash created inside the cabin. These heaters don't put out much heat when working well, certainly not enough to clear the windows of the rear cabin in real rainy conditions. And, in cold (20 F and below) conditions, they don't even keep my rear windows from icing up inside. Yours is probably OK, and living in the Pacific Northwest not really important.

Edit: Not really important anywhere, come to think of it. Guess that's why some guys remove them for big center consoles. But, the little bit of heat they put out is appreciated by the rear passengers in cold conditions.
Last edited: Oct 8, 2014

"Unplugged"? meaning the electrical connector? Or you unhooked and bypassed the heater coolant lines?

If you snubbed your coolant lines so that there was no flow rather than bypassed the heater core, then they may have gotten clogged while sitting or during the flush of the rest of the system. You might want to try back flushing just the loop from the engine to the heater.

The rear heater in my 60 gets hot enough to drive someone out of the rear seat. I've never had my 62 out in the cold to know if it's comparable.

Thanks everyone for the replies so far.

I don't know if the 62 has a different heater than the 60 but ya, I only get a trickle so far. And from my research, some say it cooks people in the backseat and others get it replaced. I'd like it to throw out the heat if its supposed to.

"Juggernaught" - OOPS! Forgot to clarify that is was the electrical connector I disconnected and reconnected.

James, your troubleshooting will take you in two different directions.

If you have good airflow but it isn't hot, then either you have a clog in the coolant path or the valve isn't letting enough hot coolant through.

If you have good heat but poor airflow, then either your core is covered with dust bunny's, candy wrappers, dog hair, etc. or your fan isn't turning well.

If your fan isn't turning well, then its either the wiring or the motor. I've worn out the brushes on a couple of dash blower motors but haven't worn out a rear heater motor yet.


If I were you, I'd start by cleaning the core.

To slightly disagree with 89gashog, the rear heater on my fj62 feels like it will melt the carpet. It pumps lots of HOT air with the fan on High. Granted I don't live in an arctic climate but it makes a big difference.

Whether you need the heat or not, the rear heater is my favorite way to warm and dry out wet footwear.

Been away for a little while...

If I start with the core, is there a separate one for the rear heater??? Or is it coming from one source under all the dash components that I've read is a pain to access!!!

Thanks a bunch,
James

Yes, they are separate cores. The dash core is very hard to get to. The rear heater is much easier. Just remove the center console as you've done before. You might be able to vaccuum up the debris in and around the heater without removing it. I would try first for sure. Unbolting it from the floor might allow you to pull it up enough to clean the floor underneath it. It draws air from the bottom.

If you do have to remove the heater, you will need to drain some of the engine's coolant. This isn't hard but it is messy and you'll need a way to collect and reuse (or properly discard) the coolant. Here's what it looks like to remove a rear heater from a FJ-60: 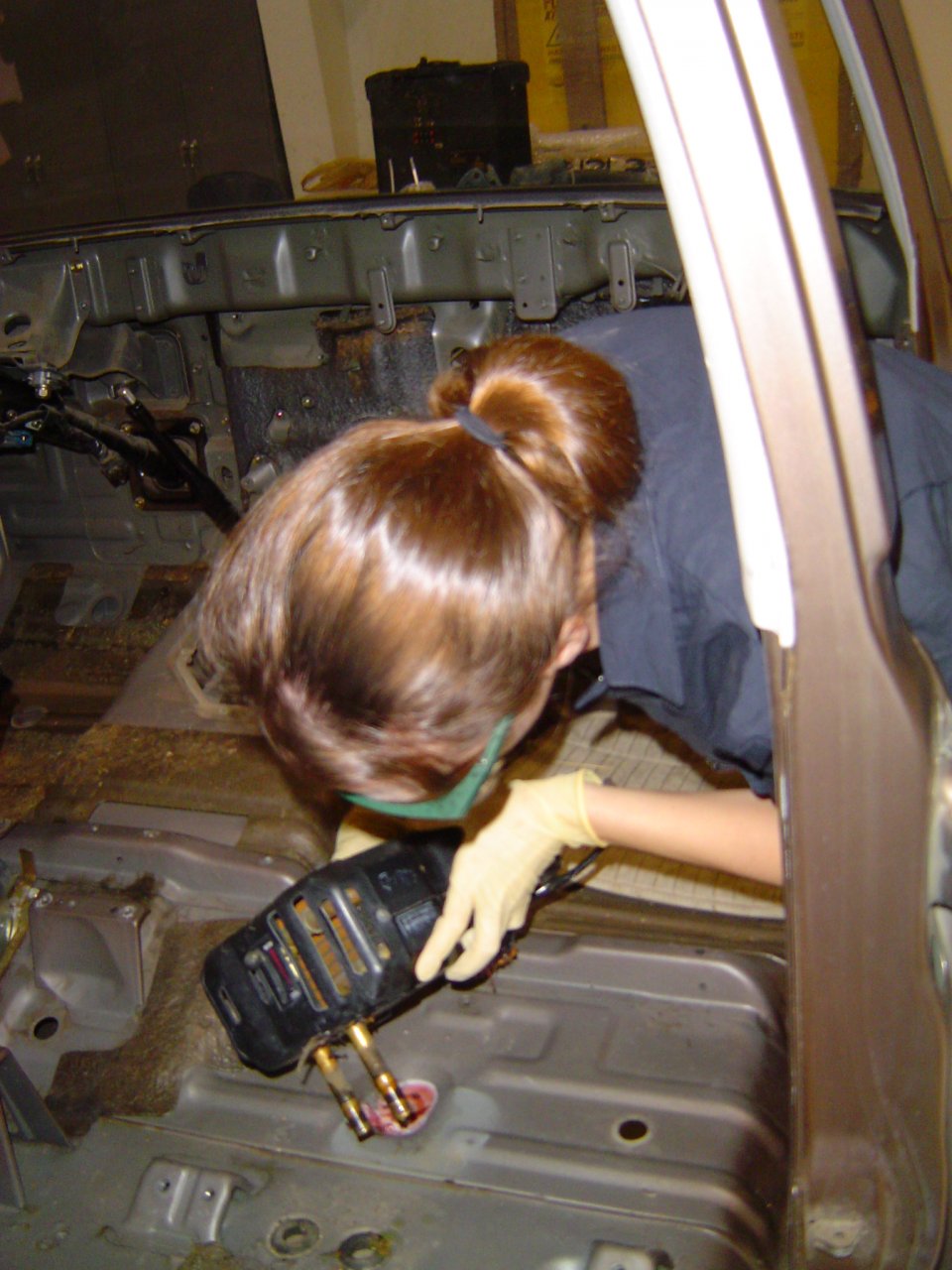 That pink area on the floor is melted candy filling 2/3rds of the divot in the floor where the fresh air is drawn from. It was keeping the heater from being able to draw fresh air. You can even see some candy sticking to the grill of the heater next to the technician's hand. That kind of dirt is probably all that is wrong with your heater.

The orangish part you see inside the louvers on the black box is the copper heater core. If you can shine a flashlight through it and it looks clean, then focus on cleaning the fan.

BTW - unplugging the heater's wires in the summer has absolutely no effect on letting unwanted heat into the cab. Just leave the warm/cold selector on cold and it will keep undesired hot coolant from circulating.
You must log in or register to reply here.