Yes I have searched..

Been battling a recurring P0401 on my 97 LX since I go it years ago. Here are the steps I've taken thus far.

1.) Inspect VSV, good
2.) Cleared out vacuum hard lines to manifold (I "think" this is ok? what is a better way to really clean these out?). This was not easy, used some safety wire and a steel brush from the inside
3.) Replaced the EGR vacuum modulator
^^ step 3 fixed it. For almost 2 years, then the same code came back..

Replaced the modulator again, and that fixed it again for about another 1 year..

Now it is back again.

I think this is a clue to what is throwing the code, but it seems a new modulator fixes it for almost up to a year then it goes bad again.

Any ideas on what could be causing this? I think I need to do more cleaning on the hard vacuum lines from the manifold to the solenoid, but I can't seem to figure out a really good way to clean them out. If that is even it..

I'll share what I think is happening, based on your notes and my experience, but it's not too hard to test the system and know exactly why you got the code once you learn how.

What I guess is happening, at least in this last po401 instance, is that you have carbon floating around/into the system that is clogging the passage between the P and Q port on the vacuum modulator. One of the smallest, if not the smallest, passages in the whole system is between the P and Q ports (the ones straight across from each other) on the vacuum modulator. Note that the ports in the throttle body are also quite small which is why they clog also if carbon chunks can get that far in the system.

If you take a known good vac mod you'll notice that you can blow into P with your mouth and air will come out of Q. If the little orifice in between those ports gets clogged you can't blow into P at all. If this is how your old modulator behaves then this is your issue. I can't remember if you need to block off R to test but that's easy to check. What's important is that P blows to Q.

I drove around with a short piece of vac line and welding wire etc. in the door pocket, kept spray cleaner close and learned to test and figure out where the clog was pretty quickly after years of this issue recurring.
A vacuum gauge, pliers, small hose segments and t fitting allow you to test the egr valve, etc. and each part of the system pretty easily one section at a time but once you've gotten the components worked out my guess is that you are dealing with repeated clogging from little carbon bits.

My long term fix, after a few years of repeated PO401s, sometimes many months apart and always after long highway trips, was to add a clear gas filter in the line that runs from the charcoal canister to the plumbing under the manifold. In my case I had changed out the contents of the charcoal canister and either because of an issue I introduced or a difference in the media that I used that was the source of my clogging chunks. I didn't figure this out until after changing everything out, cleaning things and then fixing the same P to Q clog on the modulator repeatedly over the course of a few years. Now that the filter is in place I actually see a bit of carbon in it and I haven't had another P0401 in over a year and many long trips. I planned to share all of this with pics at some point but was waiting to make double sure that the problem was solved. I hit that point of certainty months ago so I'm sharing here

If you have your "bad" vac modulator test it per above and see how it works. If needed clear it with spray clean and it's likely a good spare now.

There are lots of good videos on how to test toyota EGR systems related to PO401 which can give you ideas for how you can get good at figuring out where the problem is to zero in on your recurring issue. Note the system organization in the following two vids is a bit different than on our 80s but the ideas apply and many of the components are identical even if in different positions.

Jpoole, brother, you have the patience of Job.
Me, I deleted the EGR and called it a day. P401 is never to be seen again...ever.

@jpoole you're the man! I'll run through all of that. thank you!!

Rusty Marlin said:
Jpoole, brother, you have the patience of Job.
Click to expand...

Ha, I have to laugh (to keep from crying). I could argue my approach or yours but your approach would win out if I did. As with many things fixing the EGR on my 80 was basically a problem of throwing good time after bad. After the initial effort to fix the EGR system (many new parts, cleaned out manifold, etc.) I just couldn't give up. It only took me 3 years to finally get it fixed...

The fuel filter fix which was the final piece of the puzzle for my 80 has thus far resulted in 7 months and 10k miles of driving without any check engine light or PO401. Without the fuel filter old PO401 would have come back multiple times for sure. Of course this was the last of many fixes, so you have to pay to play, but it's as satisfying as it may be pointless to have a functional EGR system. Here's the filter in all it's glory 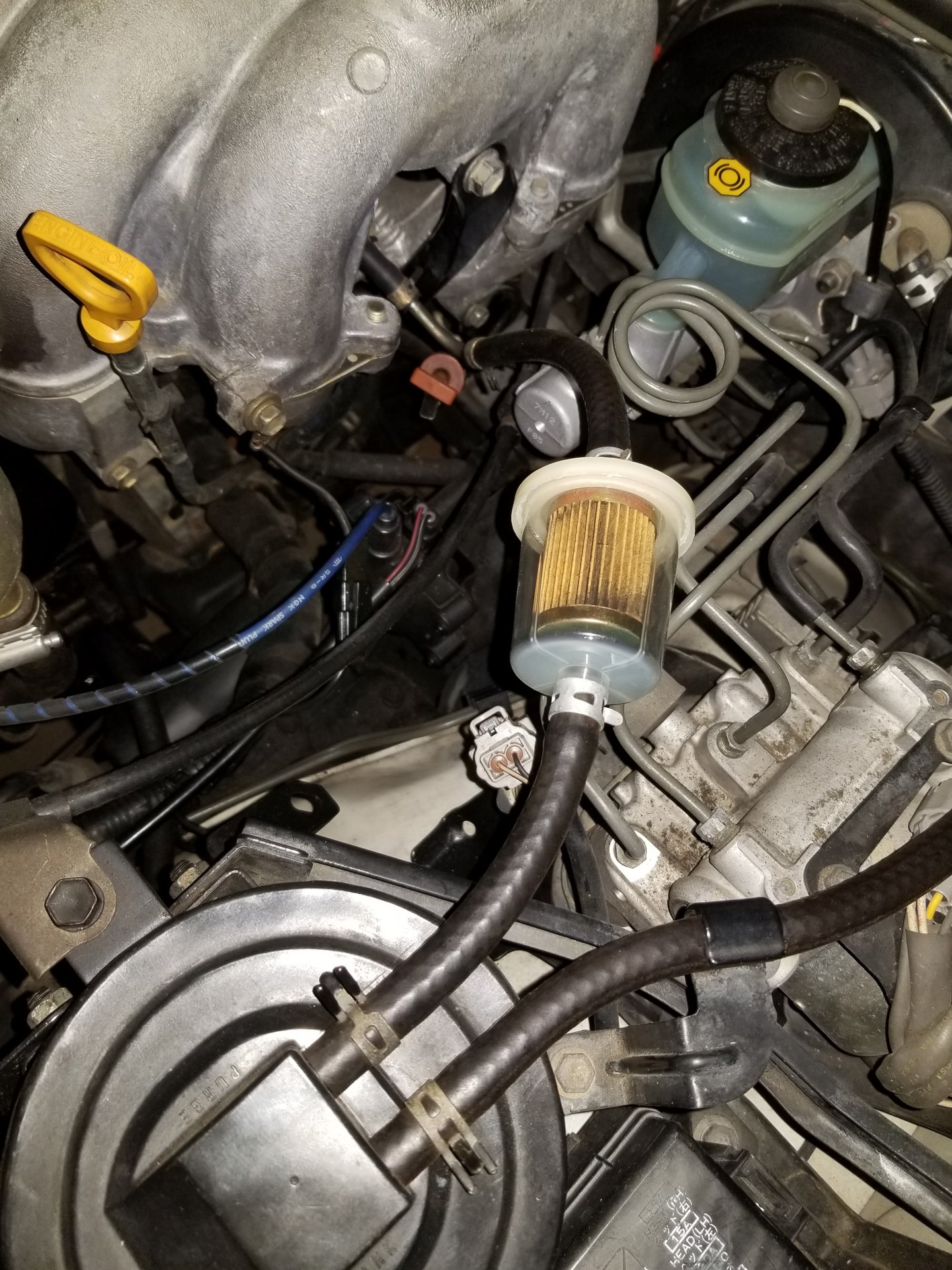 ok, so I don't have any clog from P to Q. However, plugging P and R ports and trying to blow into Q I get nothing.. not sure where this is supposed to vent at that has a clog?

Sounds like my guess was wrong and you experienced a problem different from my final, recurring issue. It was worth a try and maybe the info will help someone else.

Here's some additional info related to testing the vacuum modulator and you can also work through the FSM testing procedure:

Hi guys. I'm currently in the middle of testing my EGR Vacuum Modulator to see if it is good or bad. Per the FSM, when air pressure is applied to port Q while ports R and P are covered, air should escape through the filter. Mine does allow air to pass through the filter, but air also escapes...

forum.ih8mud.com
​
If you have driven a good bit without the code thanks to the new modulator then maybe the last one failed prematurely with a leaky diaphram instead of a clog? Is the filter (under the top cap) clean or dirty?

Beyond testing the old modulator that you have off you need to be in a situation where you're throwing the PO401 and have a problem to test the system on the truck and find whatever is causing it.

Ya, this is the 3rd modulator I'm on. Pulled the cap, wasn't too dirty. Ran brake cleaner through it anyways. Cleared out the ports to the Intake Manifold as well. Reset the code, let's see if it comes back.

It is almost like something is either clogging or destroying the diaphragm?

Maybe I just need a collection of cheap modulators. The OE ones are expensive.. lol

FYI, this video helped me understand how it functions at least.

Depending on how far in you are willing to get sucked in testing with a vacuum gauge can be a fun and informative way to troubleshoot and learn how the vacuum side of the EGR system behaves. For driving tests I've taped the gauge to the driver windshield wiper and run the hose under the hood so that I could watch it while driving. Most of the tests below can be done stationary but it can be interesting to watch the gauge as you drive (carefully of course!).

A few tests you can run with a vacuum gauge:

-Use a T fitting, short bit of hose and connect the gauge to the vac line in between the EGR valve and the pass-through on the intake manifold.
--this will let you see the whole system in operation and can be informative if you are curious when things engage while driving/etc. provided that the system works.

-Pull the vac line that runs from the egr valve to the pass-through on the intake and on to the VSV. Plug your vac gauge straight onto the egr port you just pulled the line off of.
--this lets you test the system without the VSV at play and if all is functioning can make it easier to get a sense of how the system behaves without trying to figure out how to get the computer to close off the vsv so that vacuum can build.

Most of the above you can do sitting in your driveway of course and as you understand each part of the vaccum EGR system it does become easy to find a problem in this part of the EGR system. It's still possible that if the vac side of things and EGR valve etc. are all good that you could have a clogged port in the intake or faulty flow temp sensor/wiring.

To throw it out there for posterity I'd say that my guesses for PO401 causes, roughly in order of how common they are:
I guess one reason I've enjoyed troubleshooting this system is that it may be the closest equivalent to carb tuning on an FZJ80 and I'm used to having a carb to mess with on most of my autos

If you dig into your old one a bit further you can see where there's a small constriction between P and Q where small bits of carbon can get stuck, should you have them.

I look forward to hearing what the issue is with your system.

So after cleaning the modulator with brake clean, the ports in the manifold with brake clean and (sucking and blowing, ew) the bottom part of the modulator to make sure the diaphragm moved, I have not had another code for about 200+ miles. Fingers crossed.
You must log in or register to reply here.