I’ve been sitting on this baby for over half a decade now. My plan back then was to rebuild the engine and buy a FJ60 or 61 for cheap, put it in and smile for the rest of my life.

But life, love and purchasing a perfectly good Hz76, and moving, changed the plans.

Thing is, it needed a lot of work, having lived in a Zimbabwe Coaster bus and it was probably all too much for me back then. I now have the time and money to get her up and running, the only problem being no definite plan on what to do with it.

I have a good reliable Cruiser but I still want a toy to muck about with, and I still want a Toyota turbo diesel in my life. So I am going to rebuild and then make a frame to bench run it and go from there.

First off was to see if the IP still at least functions, I know the injectors should be rebuilt but it would be nice if the IP has survived. 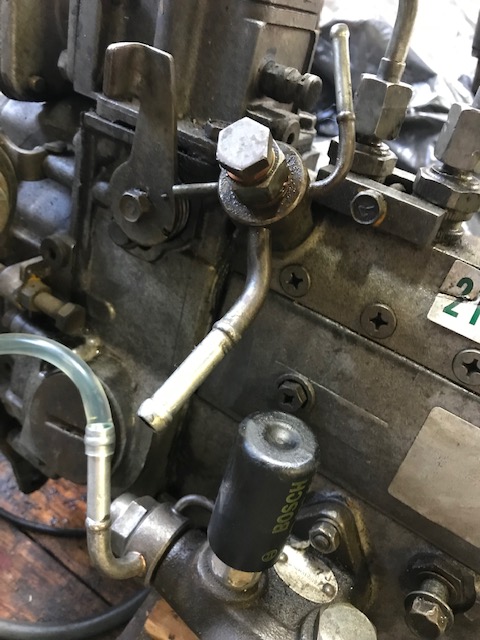 I have set it up on my work bench (with pipes and injectors) and primed it, early days but with a hand crank, nothing pissing out of the injectors yet, but I am getting fuel out of the pipe in the picture. Where should it be connected to, I was under the impression that inline pumps did not have a return. I know the smaller diameter pipe should go to the injector spill tube.

Also, can I expect enough pressure to crack the injectors by hand turning the injector pump?

OK, so parts have started rolling in from the engineers and a little time is at hand so the ball is well and truly rolling.
Cleaning first and and then small gap while the pistons get " topped", .5mm in my case, sounds a lot but a double checked. 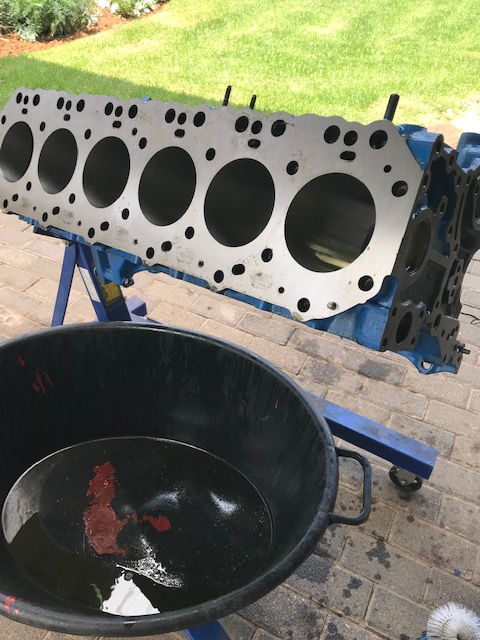 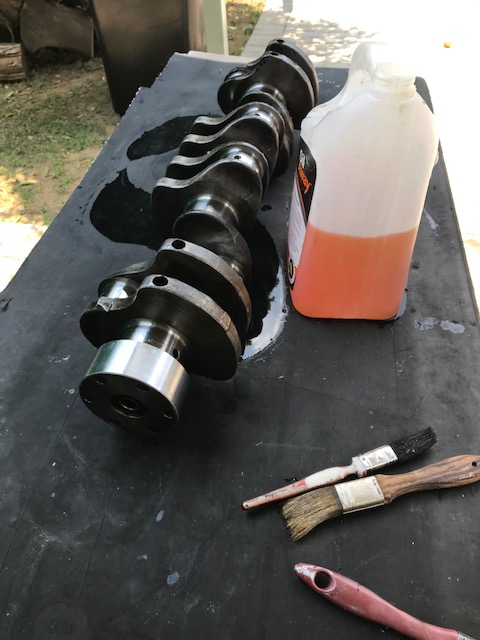 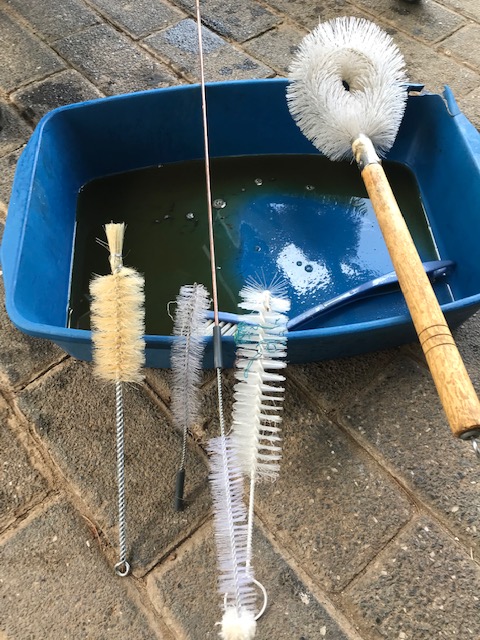 and then a well layed crank, with the plastigauge confirming what i told the shop, keep it tight, but within speck. 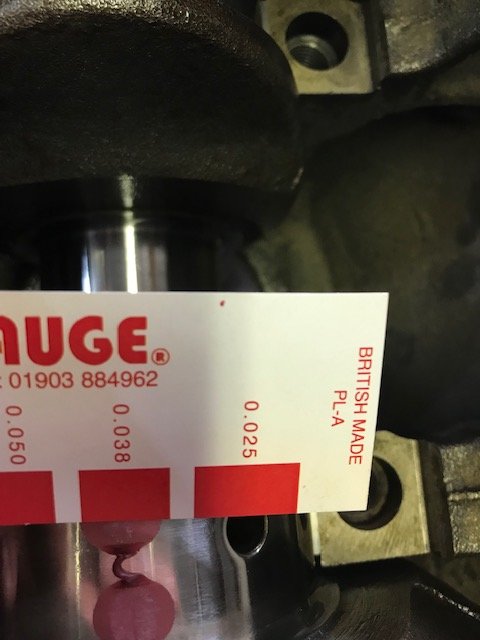 Anyone know that the 12HT and 2H had these inserts in the head?? 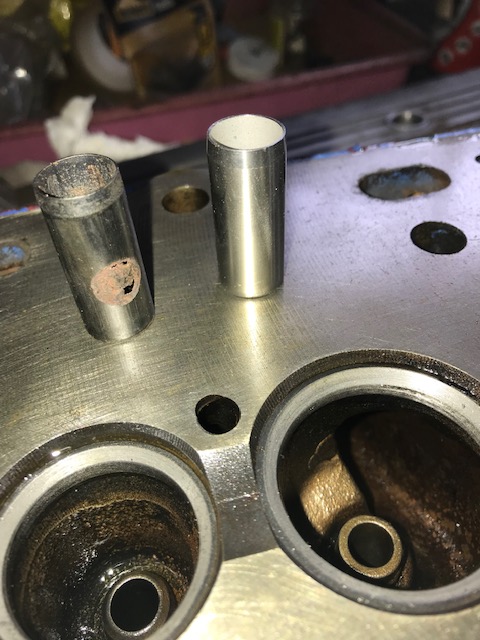 Old one on the left. I noticed some rust on only one of the head bolts so I went looking for trouble and found it. The bolts along the exhaust edge all have these inserts. Who would have known. 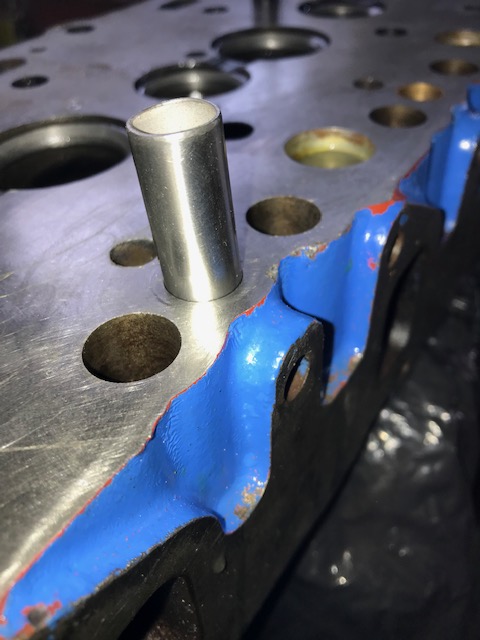 Oh, and the primer coat was good, the rattle can top coat argued with the pressure washer.

WTF I have one odd conrod.

Could not believe it, but one of the conrods has the notches on the other side, so the bearing shells will not fit. 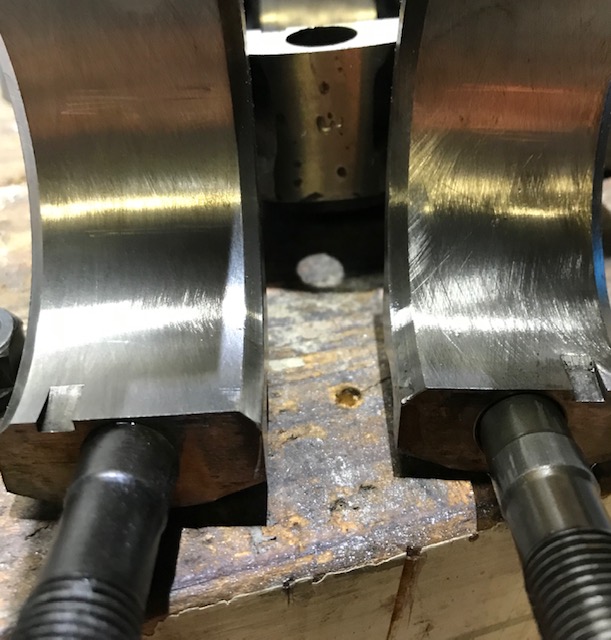 This one slipped me by, but WTF, where did it come from. The rod is identical in every other way? Weight is the same, length checked out. I clamped the bearing shell closed with the shells in the notch but sticking out, and then clamped a good rod on to the sticking out part of the shell. In this position, I could slide the crank pin easily from the one to the other, so the lenght definately is the same, and even the little knobs indicating which side faces forward are there. The shop which is going to top my pistons can notch the rod and cap to suit the bearing shells, so thats what I'm going to do, unless one of you can convince me different?????

Oh , definately been apart before, just seemed a bit strange to have the same size but diferent orienation. I'm still in two minds as to wheather to re-notch and let her go, or look for a replacement.
E

12ht does have a fuel return line

Yeah cheers Earwig
I rigged it up on my bench made a turning handle and primed it, and hooked up the lines and injectors. I got a good desent squirt on all 6 injectors, although they leaked like crazy, so the pump may be OK, and the injectors go in for a rebuild. Holding thumbs.

Oil pump housing next. If you look carefully you can see machine marks on the face which accepts the oil pump cover. I had too much of a gap between the cover and the rotors, and this corrected it. 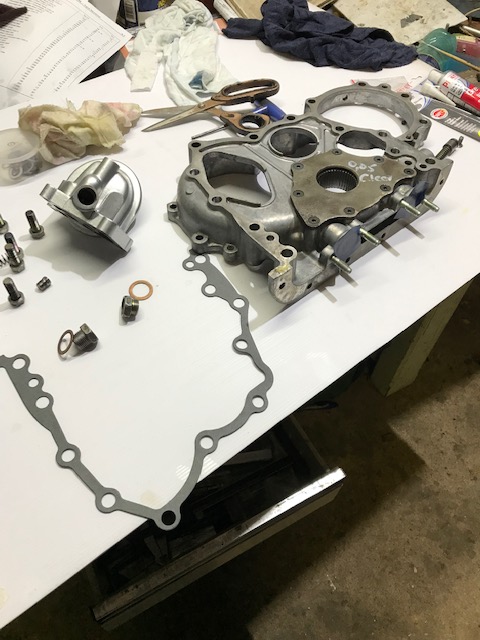 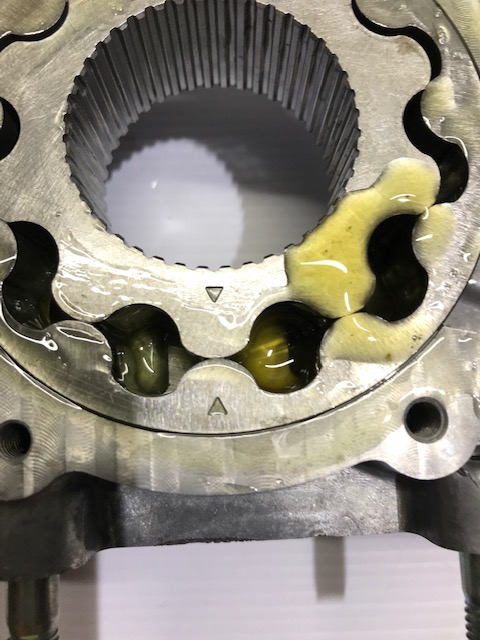 By the way, the bolts below, one is for the oil pump relief valve, and the other for the oil filter relief valve. Does anyone out there know which is which. The valve and springs are obvious, but not the bolts ( Nuts). 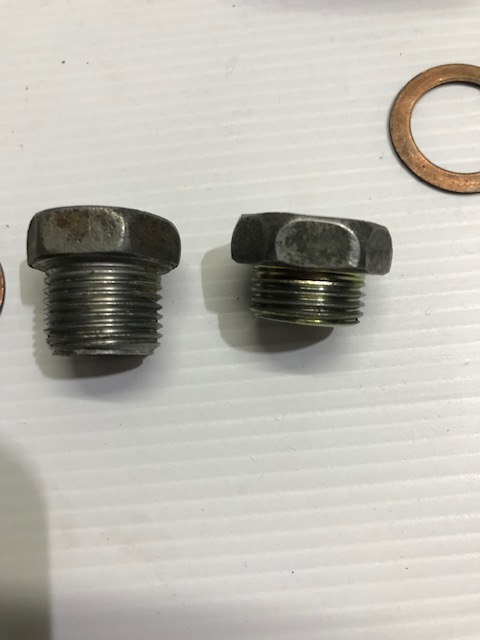 The short one is for the oil pump relief valve.

Don't feel too bad about the different rod issue Gengis, and i thought i was the only one! Lol!

I just went through this last year while re-building my 12HT that i had been sitting on for many years as well.

What i had was one bent out of the original six, #6, I was given a used rod and felt all was good as i had not noticed the difference in the bearing tab orientation until the call from the machine shop!
I looked around for some time to find the correct rod with no luck so we ended up doing what was done to your motor, one rod with opposite tab style bearing shells.
You are correct the dimensions are the same so no issue there however i did have them balance the rods.
I had not even thought about it as an option at the time to machine the rod and cap as i already had a replacement rod in hand, but i do think it would work.

Cheers and great luck with the Build!!

BTW, which hole had the different rod? I've dealt with and heard of a few of these that have had a bent rod issue and all the ones i know of are #6 including mine. I assume yours is backed up with a manual trans as well?
Mine and the others i know of with this issue were all manuals too. Wondering if that has some bearing on the bent rod issue? Thinking out loud...

Confirm, shorter one for the oil pump?? Thank you

Ja, we probably had a similar problem with the rods here. I bounced it off the machine shop and they are happy to re-notch and call it good.

REDREEFER said:
BTW, which hole had the different rod? I've dealt with and heard of a few of these that have had a bent rod issue and all the ones i know of are #6 including mine. I assume yours is backed up with a manual trans as well?
Mine and the others i know of with this issue were all manuals too. Wondering if that has some bearing on the bent rod issue? Thinking out loud...
Click to expand...

Mine seems to be no 5 but it was an F... up when i got the engine so I gave the rods to the machine shop and they mixed and matched and resized the lot. They did a bloody good job, but failed to notice the one odd rod. That was a number of years back, so no comebacks.
G
You must log in or register to reply here.
Share:
Facebook Twitter Reddit Pinterest Tumblr WhatsApp Email Link
Top Bottom