Aisan Carb Question - What is this hole? (1 Viewer)

On my 11/72 FJ40, I just swapped out my carb base on my Aisan carb with a vacuum ported unit from SOR. In doing the swap, I noticed the new carb has a vacuum hole in the center that was not on my original base -- see pics below and the associated passage way in the upper body. The gasket between the upper and lower body had a matching hole, so whatever this is, it's now in operation on my rig.

In swapping in the new body, I now have a slight stumbling when I engaged the secondary throttle plate linkage during hard acceleration. This stumble when transitioning to the secondary did not exist before, so I think it has something to do with the new throttle base, but I'm still doing my research.

Thanks as always for any help or insight you can offer. 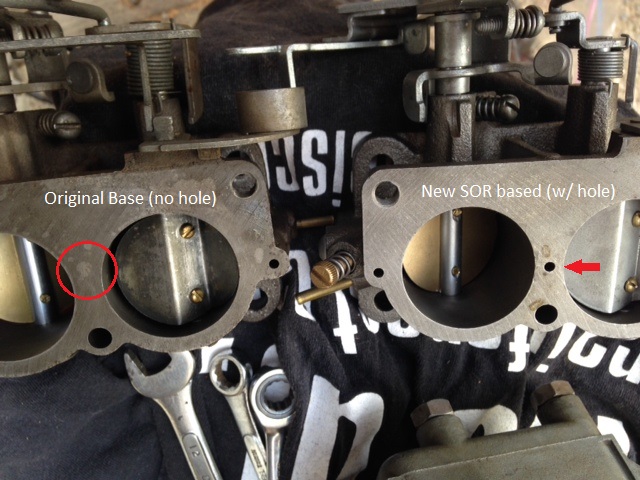 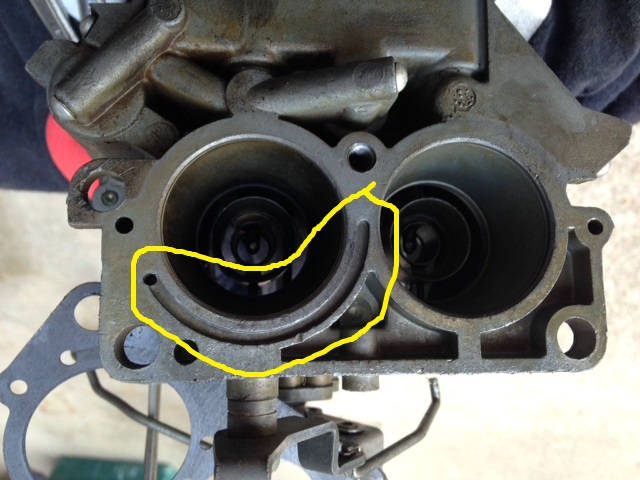 ^ that's what I'm thinking, OP take a look at the bolt that goes in from the bottom to hold the carbs together, do they both have a vacuum port running through them?

If you don't have a vac supply to the power valve then the stumble is most likely a lean condition when ur transitioning from primary jet and need the added fuel from the power valve,

Without pulling the carb apart again, I'm not sure what feeds this port. I know the bolt that goes in from the bottom has a hole in it to feed vacuum to the power piston, but I'm not sure if it is somehow connected to the small port on the base of the throttle body. I recall reading/viewing a post where someone explained the purpose of this port and the corresponding passage in the main body (2nd pic), but I haven't been able to locate it. I'll keep searching.

It looks like there are two different throttle assemblies, including one from 9/69-12/74 and one from 1/75-7/87. From the pictures I've seen, it looks like the earlier version has a hole in the center plate upper side, where as the later does not. The throttle body that I had on my 11/72 did not have a hole, whereas the one I received from SOR for my year did, so my thinking is that the PO swapped in a newer assembly at some point in the past. So if I'm correct in my understanding, my only question now is to confirm the purpose of this hole and then to hunt down the reason for the slight stumble I get when I engage the secondary linkage. I'm thinking a full carb rebuild may be in my near future.

I remember this instance--not sure if I saw it in Pin_Head's videos or not --maybe on the secondary overhaul one? Maybe even in the carb kit rebuild gasket kit instructions?--know I've seen it before but where??
You must log in or register to reply here.

M
Intake Manifold, what should this be connected to?