I have a VIAIR air compressor that I have finally mounted and wired up in the rear of my 80. I also have a 2.5 gal tank that I'm going to install later but I'm still waiting on Wit's End's rear tank mount shelf.

I mounted the compressor on the left side of the frame for a close routing to the future tank, then I noticed that it may be too close to the fuel filler neck.

I am worried that it might get too hot and warm up the fuel filler neck which would probably not be a good thing.
I think I already know the answer to this question, but should I move it? Maybe I should shift it down, or add a heat shield, or just put it somewhere else?

I have attached some pics. (air intake is temporary, I will be moving that somewhere else) (air chuck location is also temporary)

Also, I noticed one of the photos on the Wit's End website has a compressor reasonably close to the fuel filler, so maybe I'm worrying about nothing? I'll attach that picture too.

Thanks in advance. Onboard air noob here. 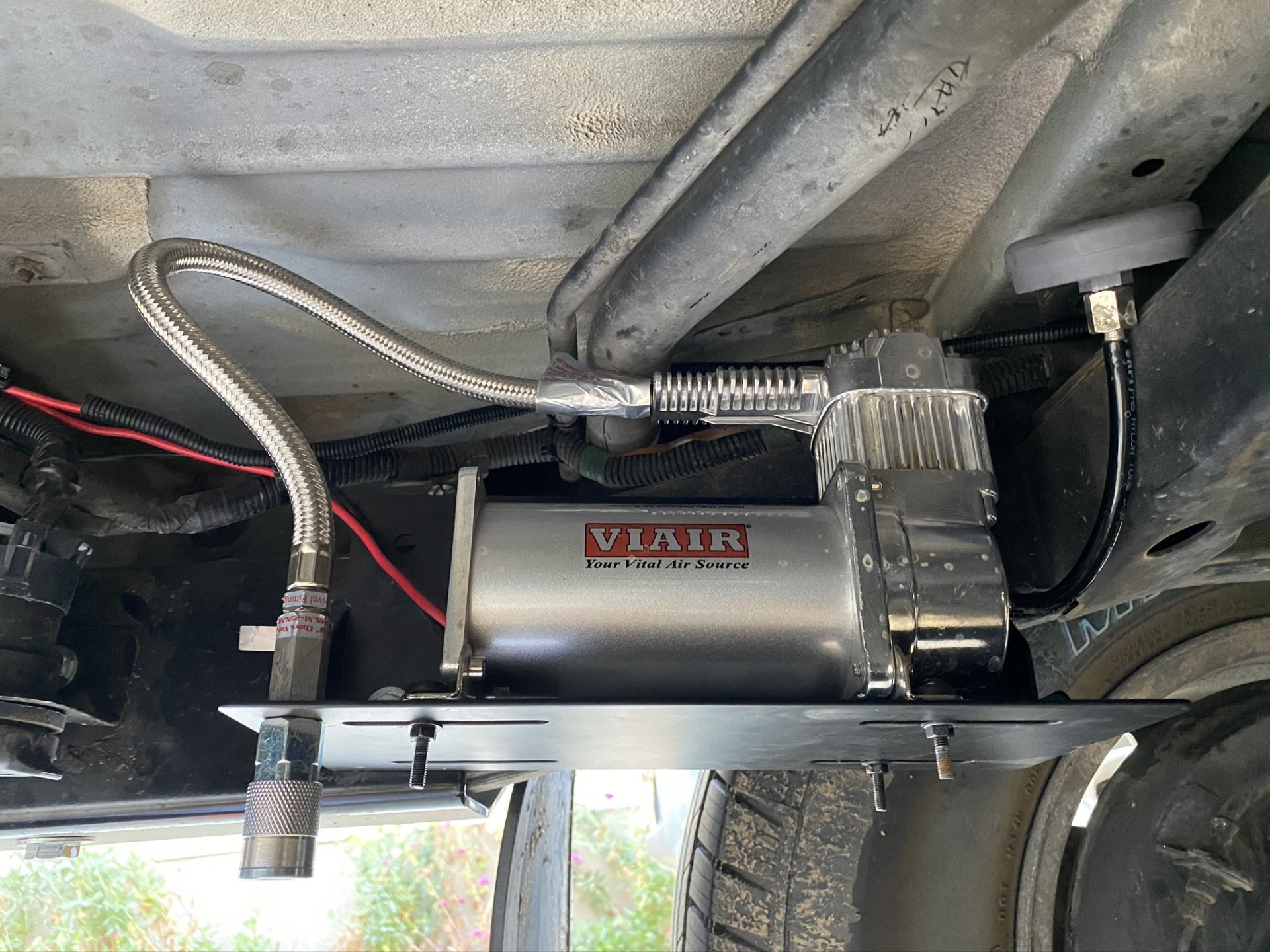 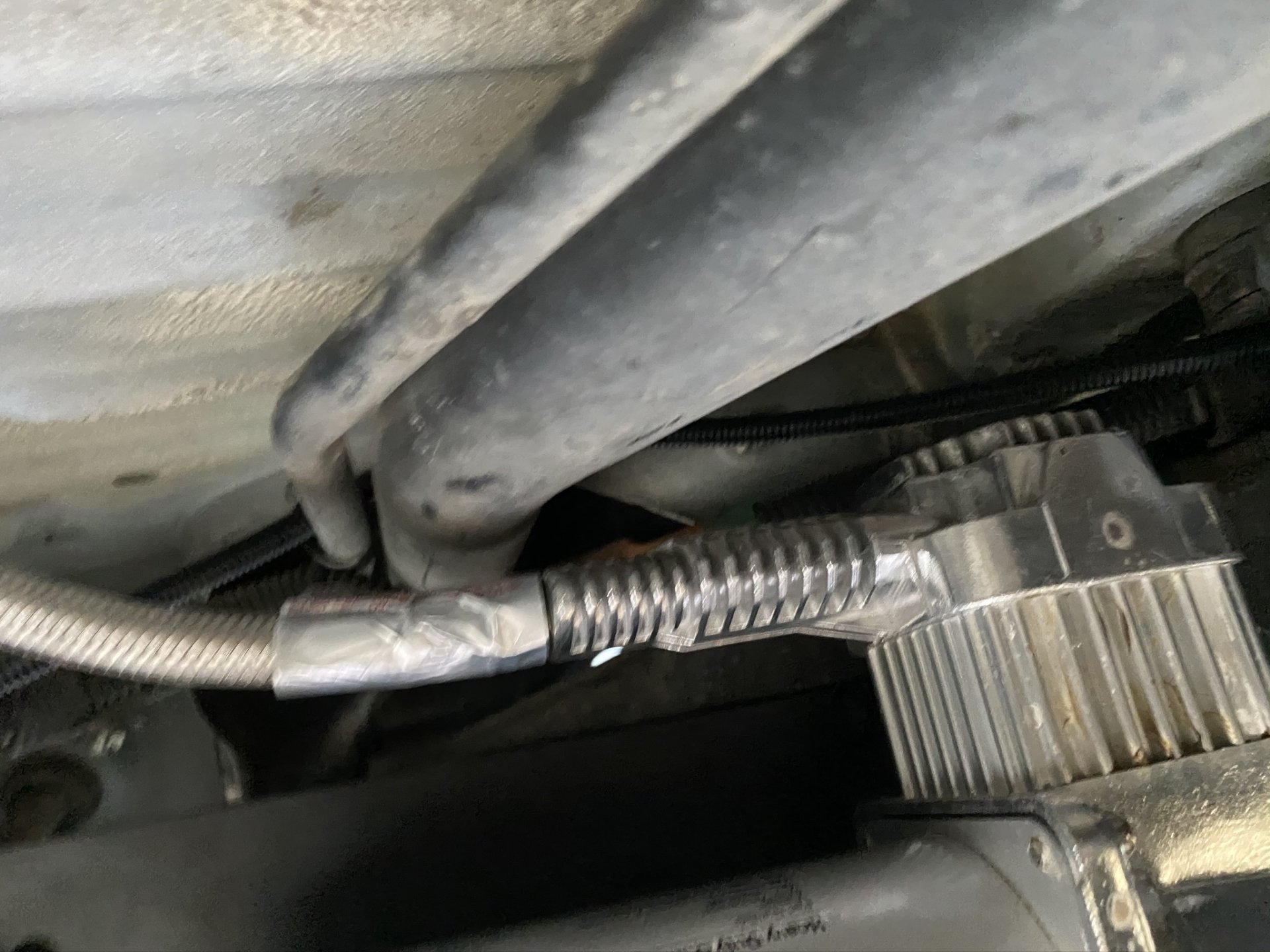 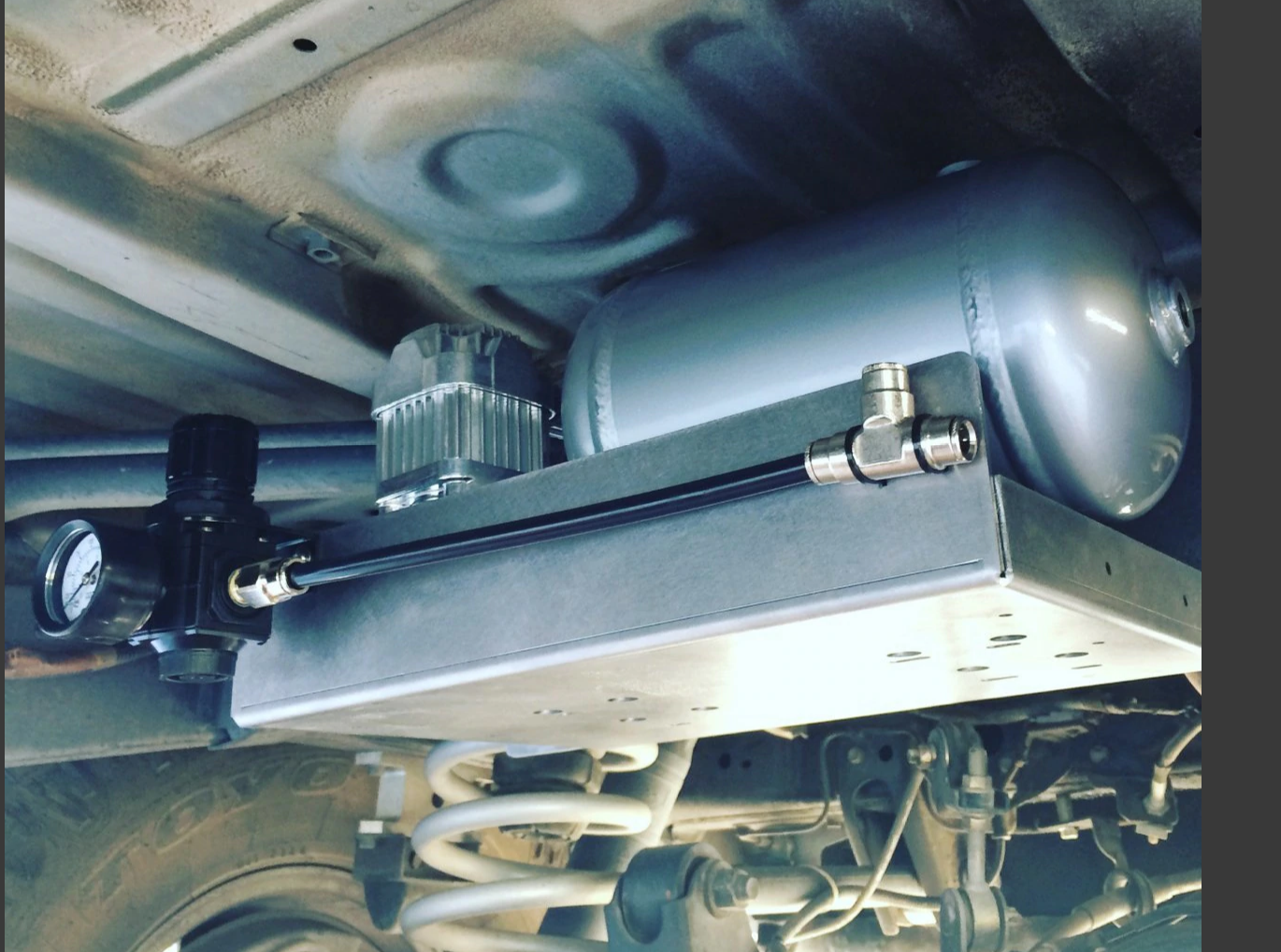 I wouldn’t worry about it if there is no direct contact. Maybe wrap some aluminum tape Around the filler pipe if it makes you feel better.

I have it there in my SC truck for a year and a half now. Haven’t had an issue at all. That being said I’ve only used the compressor a handful of times with that setup.
Last edited: Jul 23, 2020

Alright then I won't worry about it. I'll wrap it with some of that heat tape.
Thank you @wearsabrowncoat and @NLXTACY

+3 on no worries. Can't imagine you'd use it enough at one time to generate any amount of heat to be concerned with.

I just received and installed my rear tank shelf. Thank you Wit's End. After installing, I have two concerns about clearance.

1. My exhaust came in contact with the shelf. I filed down the shelf a bit and put a slight flat spot in the exhaust, no more contact. But the shelf does move; it's flexible and not totally solid (secured with 4 bolts that thread into captive nuts in the crossmember). Should I be concerned with the exhaust clearance? (NOTE, I have a custom exhaust mounting in the rear so this is probably the reason for the issue. Otherwise, on a stock exhaust, it would probably be fine.)

2. The top of the tank is also quite close to the floor of the truck. For the same reason as before, should I be concerned about it flexing and hitting the body?

Thank you in advance. 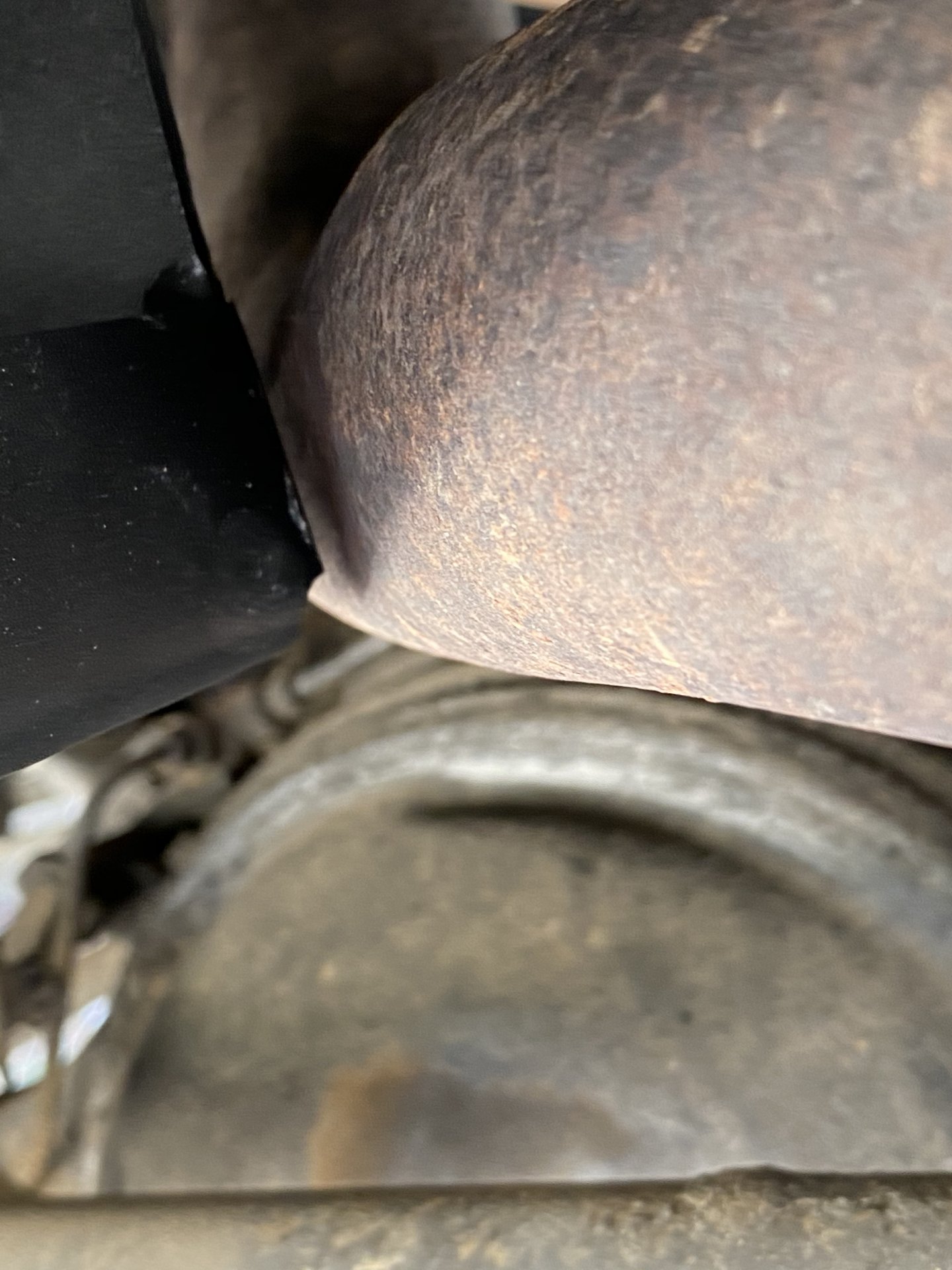 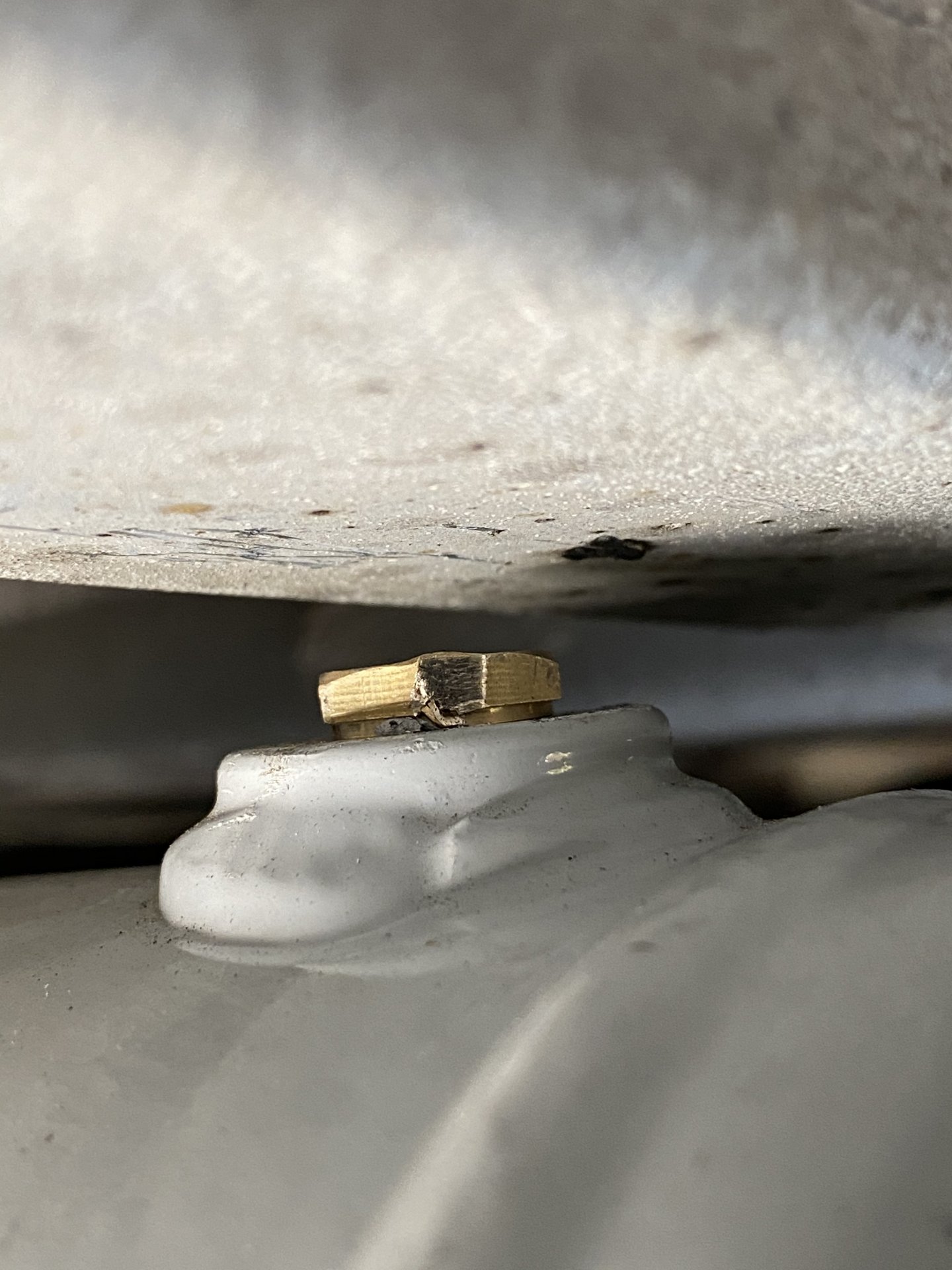 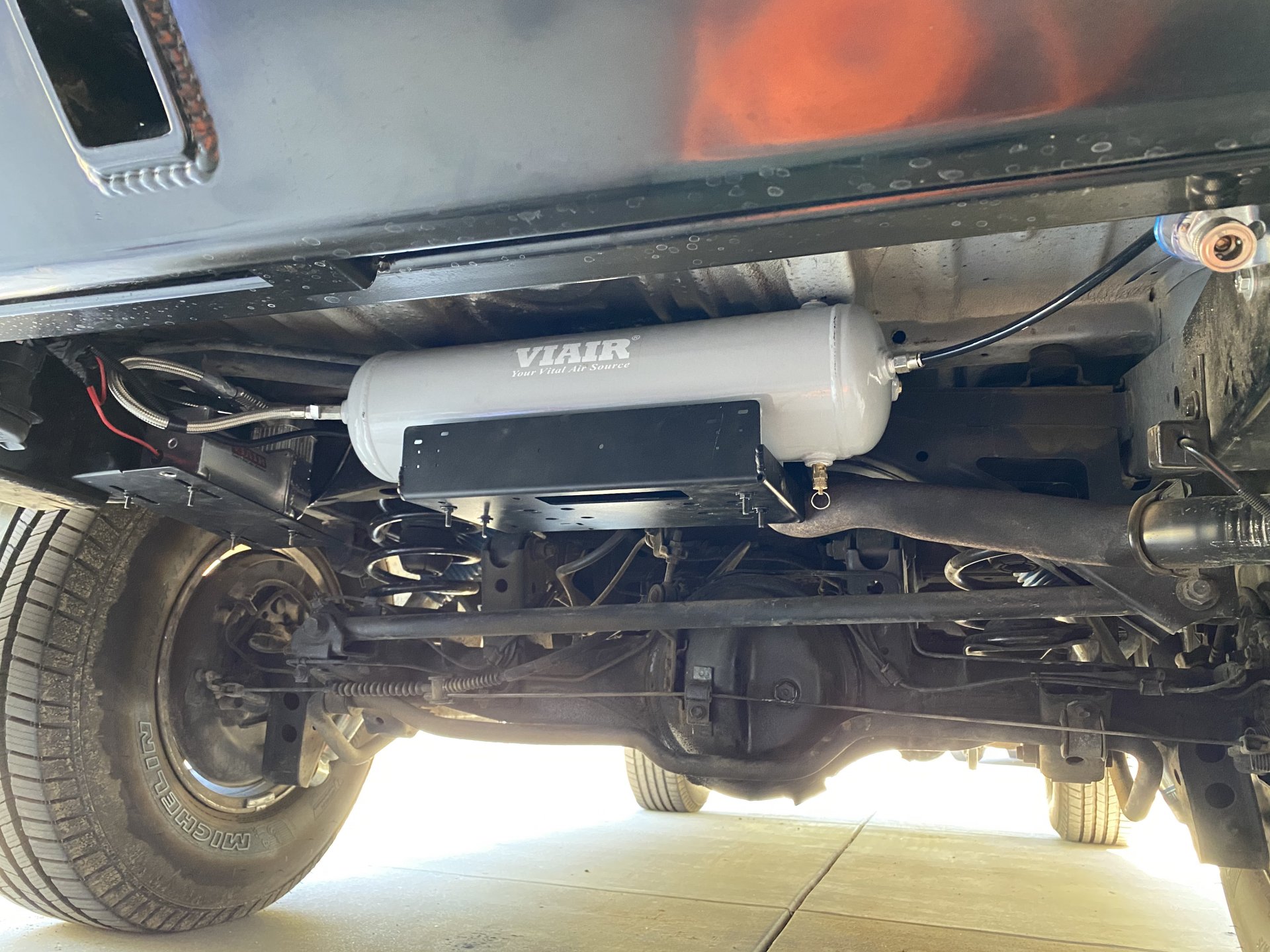 The shelf is designed for stock exhaust with plenty of clearance. No problem shaving a little off where needed. It’s also designed to keep the tank close to the floor. No worries there either. It won’t flex unless you are doing push-ups on it.

NLXTACY said:
The shelf is designed for stock exhaust with plenty of clearance. No problem shaving a little off where needed. It’s also designed to keep the tank close to the floor. No worries there either. It won’t flex unless you are doing push-ups on it.
Click to expand...


Awesome to hear. I just smoothed the weld and massaged a little flat spot in the exhaust and I haven't noticed any rattling or clunking so I think it's all good.
Thank you again. Very happy with the setup and the quality of the parts from @NLXTACY. (I got the modified hub nut socket the other day BTW and it's so great)
You must log in or register to reply here.

On board air connections
2