This has been a very annoying problem that I have lived with for some time now. As slow as the 3FE is, this makes even more unbearable. I'll start by saying that I drain and fill the trans. every oil change. Trans. fluid looks new and unused every time. I drive my 80 about twice a week mostly around town or some light offroad.

Scenario 1:
I am at a stop light. When the light turns green I give it gas and the 80 is slow to get up to speed (not so unusual, I know)so I floor it. Then it seems to gear down as if I am starting from a stop in second.

Scenario 2:
If I physically shift to first and then start from a stop all is well until I shift to second @ 2000-2500 RPM. The trans. does not shift and I have to back off the throttle to keep from hitting the redline. It takes roughly 10-15 seconds from the time I shift until the trans. actually shifts.

I have followed the troublshooting guide in the FSM. There are four remedies.
1. Throttle cable out of adjustment- Adjusted that a long time ago and still good.
2. Throttle cable and cam faulty- Checked this out recently, no problem there.
3. Governor faulty- I'm not sure where this is. There is no location given in the FSM. Can someone point me in the right direction?
4. Valve body- dealership? I don't really want to tear into the trans.


My question is has anyone experienced this problem or dealt with the governor or valve body? Either in terms of fixing them or cost to fix them.

I just want to know if I am on the right track and gather as much info. as possible before I take it to the dealership.

I'm assuming it does it all the time and not just when it's cold?
P

Most of the time over the years the cable has streeched and thus the adjustment is a little out on the Kick down cable(even if adjusted to FSM), It sounds like yours is way streeched. So my suggestion is to tighten the adjustment a bit past the setting you have it on now and see if this improves the shifts, If so then take it a little futher to the point of where it shifts as you think. There is a shift RPM under WOT in the FSM to where the tranny is to shift(close to 4k I believe). Yes your engine can go to red line, but most do not do it well becasue of the varnish build up in the engine. The cable is most likey your culpruit.
Also in the future it helps to have milage and condition of the vechicles as well as the year(with the 3fe is a sure thing of either 91/92). later robbie

Gumby,
Yes, this happens all the time

Robbie,
Thanks for the tip about the kickdown cable. I'll give it a shot. So would a stretched kickdown cable cause a delayed shift from 1st to 2nd ONLY and no other gears? If so, I don't follow the logic. Could you elaborate please?
Oh yeah, 162,000 miles.
Last edited: Dec 6, 2005

Lowtops,
I will include some pictures below for your reference for you to understand where the governor is located on the transmission and a pic of the governor.

While changing the trans fuild is good, it's not going to tell you if the clutches have degraded. You need to drop the tranny pan on the next change and examine the bottom of the pan. You need to look for black material in the bottom of the pan. This will tell you one thing, that the clutches have degraded to the point where they MIGHT have to be changed. This is a complete tranny rebuild if this is the case.
BTW, keep a clean envirnoment while the pan is down, no wind to blow dust or sand up in the tranny.

Valve body: This can be taken off directly from the tranny once the pan is out fo the way. It's your preference to have the dealer rebuilt the valve body but I would have a tranny shop do it. 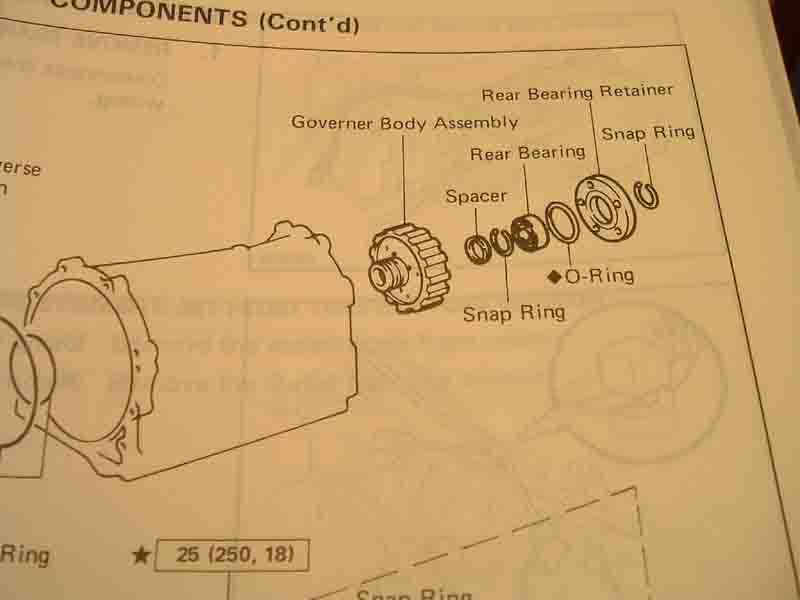 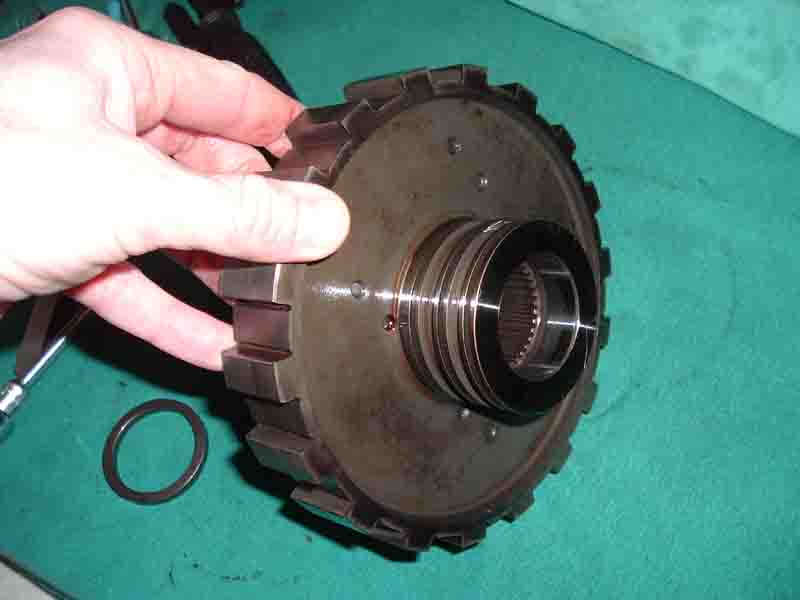 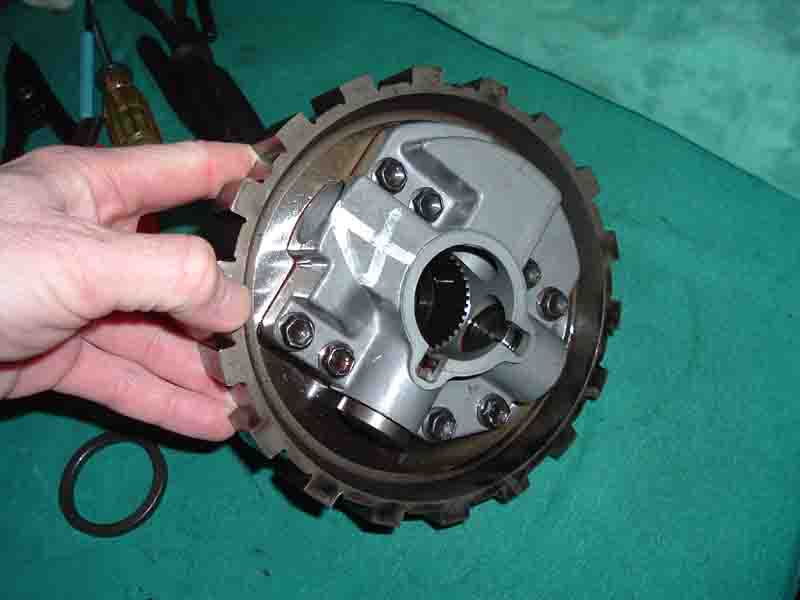 O, sorry I forgot to give you my input on cost.

Rebuilt tranny: you're talking about $3000. For that price you can buy an Extreme Transmission from OZ.

To rebuild the valve body: my estimate if you pulled it and brought it to dealer/tranny shop about $600 labor plus parts.

Scenario 2:
If I physically shift to first and then start from a stop all is well until I shift to second @ 2000-2500 RPM. The trans. does not shift and I have to back off the throttle to keep from hitting the redline. It takes roughly 10-15 seconds from the time I shift until the trans. actually shifts.

My question is has anyone experienced this problem or dealt with the governor or valve body? Either in terms of fixing them or cost to fix them.

Brad,
My 97 does something very similar between the first and second shift. The best way for me to describe the shift is a 1/2 second hold at the current RPM (whether that is 1400 RPM or at 4200), a very slight increase in the RPM, and then the shift is not quick, but lazy. The shift takes about a half of a second to shift into 2nd, and then it kind of "clunks" into gear. After a little research on this board, I took my truck to the local Toyota stealership, requesting they diagnose, replace/adjust the kickdown cable. After some SERIOUS mechanical errors on their part, they finally brought in a "qualified tech" from Philadelphia. He was very nice and really knew the LC. He personally owned several. When I addressed my concerns with him, he rode around town with me, and he adjusted my cable for about an hour. We could not get the problem to go away. He also determined that transmission had been "opened" and he told me that he would guess that the problem was internal and without tearing out the tranny, he did not know. So I have lived with it, for the last 1.5 yrs. It has not gotten worse, nor better. I was thinking about doing a Red Line fluid exchange, in hopes that it would help. It sounds like you have already gone that route and it has not solved your problem. All this to say that I have a similar problem and the tech at Toyota was not able to easily recognize it.

jklubens,
Thanks for the pics. and the information. I'm not sure what route I'm going to take if any to fix this problem.

BROKEROB,
I may be in the same boat as you and just have to live with it. It's been this way now for about three years now with no change.
P

Brokerbob, it sound like you have a solieniod that is not working properly (very similar to the 442 trannys in the 93-94). You may want to pull out the manual and test for the 1-2 shift solieniod in the tranny.
As for the earlier tranny in lowtops truck, The biggest reason I would try this first is to see what happen(adjusting the cable)and it is free. It is easy and if the increase of line pressure does something, then it may be in the cable. I would almost discount the govener as the the other shifts seem ok as well. It may come down to the valve body havien something in the circuit that does not allow full flow and pressure to that clutch until the tranny hits a certain speed giving certain pressure. So by adjusting the shift cable and giving the tranny more pressure at lower speeds it may make the tranny work properly.
If this works then you may need to either live with the way it works or have the vavle body worked on.
Do you have a FSM for the truck with test in it to figure some of this out? If not talk to Dan and order the book to do the tests. good luck robbie

Lowtops,
Powderpig's got a good point. Rule out the cable first.
Since you don't have a FSM for the tranny and I do, I can help out.
Once I get home I'll take some pics of what the cable attaches to inside the tranny.

I don't know if this helps, but I had a similar problem with my 90 4Runner a few years ago and it turned out to be a solenoid. In that case, my 4Runner actually gave me an error code indicating a problem with the solenoids. Recently, my inlaws 95 4Runner had a problem recently were it wouldn't go into any gear, forward or reverse. It didn't give any error codes, but a quick test with a multimeter on the solenoids revealed one was bad. Replaced it and fixed the problem.
FWIW, the LC tranny may be similar. Check the FSM for instructions on testing the solenoids, from what I remember, the 4Runner required them to be within 12-15ohms

Guys,
Thanks for all of the responses. I have a little time today and will try the cable again. I do have an FSM and will study it a bit more this afternoon. I will report back if I have any luck.

Thanks again, off to the garage....
You must log in or register to reply here.

S
Shifted to 4Low in drive. Did i break it ?