I am finally rebuilding my 1975 FJ40, a second time, sort of. I bought it back in 1996 and rebuilt the engine, drivetrain, replaced the body with one from Specter Off-road as the original was rusted out. Though looking back, it could have been fixed. Live and learn.
The engine started out with a surprise. When I took the head off and found cylinders 1,2, and 3 had a gouge in the cylinder wall from a broken compression ring, it had to be bored .030 over to clean up the cylinders.
Sandblasted and painted the frame, though I didn't treat the inside of the frame rails. Now I have some frame repair to do. Again, live and learn.
Replaced the original wiring harness with a used one that was in much better, aka no melted wires.
Rebuilt the front axle steering knuckles, center arm, and steering box.
Replaced all the drum brake cylinders and new shoes.

New to me rims and new tires. It had 12” wide rims before that would rub in the rear. The newish rims were 9.5” wide. Traded my old rims and tires for the rims I know have.

Put on a soft top since the hard top sides were rotted on the bottom in the usual manor. Not sure if I could have repaired them, but they are long gone now. Still have the top, front doors, and rear ambulance doors though.

Oh ya, my 1975 has an “F” engine with the 3-speed transmission and transfer case. The axles both have the smaller flange and drum brakes all the way around. So, is it really a 75 FJ40?? The VIN plate says it is and it matches the frame, so I don’t what happened before I got it.

That is pretty much what I did with my FJ40 from the time I got it until about 2002 when we bought our house. It was a daily driver for a few years, then would drive it on the weekends. Once we bought our house, it pretty much sat for the next 20 years. I drove it a few times around the yard with the kids in it, but nothing on the road. The drum brakes weren’t working very well.

Fast forward to Fall 2021 when I finally got it out of “storage” and onto the driveway. I intended to keep the original engine and drivetrain when I started this rebuild. 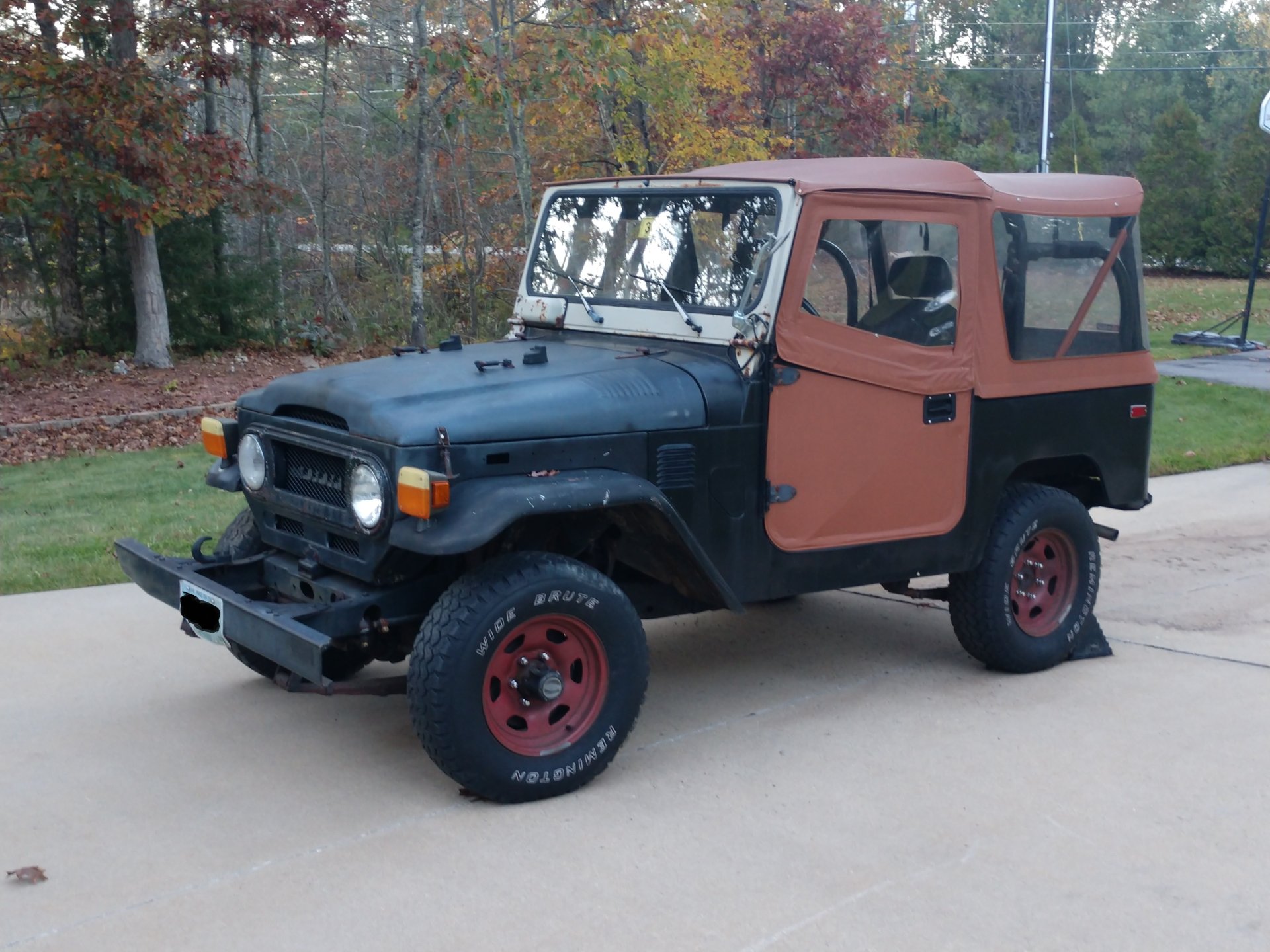 That changed when I went to asses the engine. Check compression and everything was going okay until cylinder number six, which had no compression. Took the valve cover off and the exhaust valve was stuck open and would not close with a little persuasion. Pulled the head and it appears it coolant had leaked into it. Cylinder walls were rusted as well as the exhaust valve. With the engine already being bored .030 over, not sure if going .040 over would clean it up, plus the issue with getting new pistons and rings. 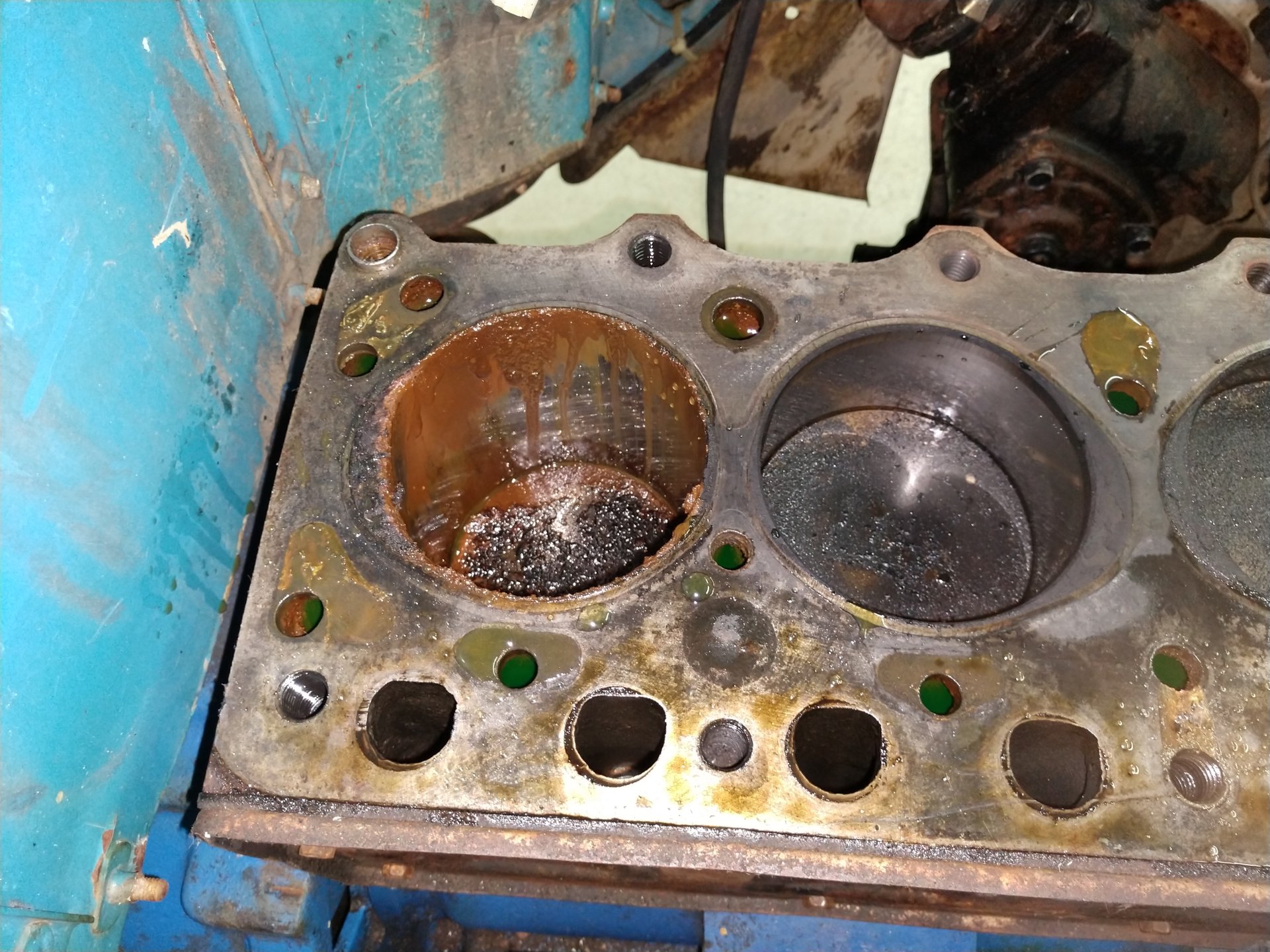 So, I am replacing the “F” with a Chevy 5.3 V8. Was going to keep the 3-speed drivetrain, but found an NV4500 with the bellhousing for the 5.3 and correct flywheel for a good price, so I couldn't resist. Would have liked a H55 5-speed, but those are a little more than Iam willing to spend, plus I would need the split transfer case. I can use my 3-speed transfer case on the NV4500 with an adapter.

Once I found that the motor was basically a boat anchor, time to dismantle everything. Bag, tag, and place parts in totes. Cleaning out the mouse hideaways as I go. Then I am down to just the frame. 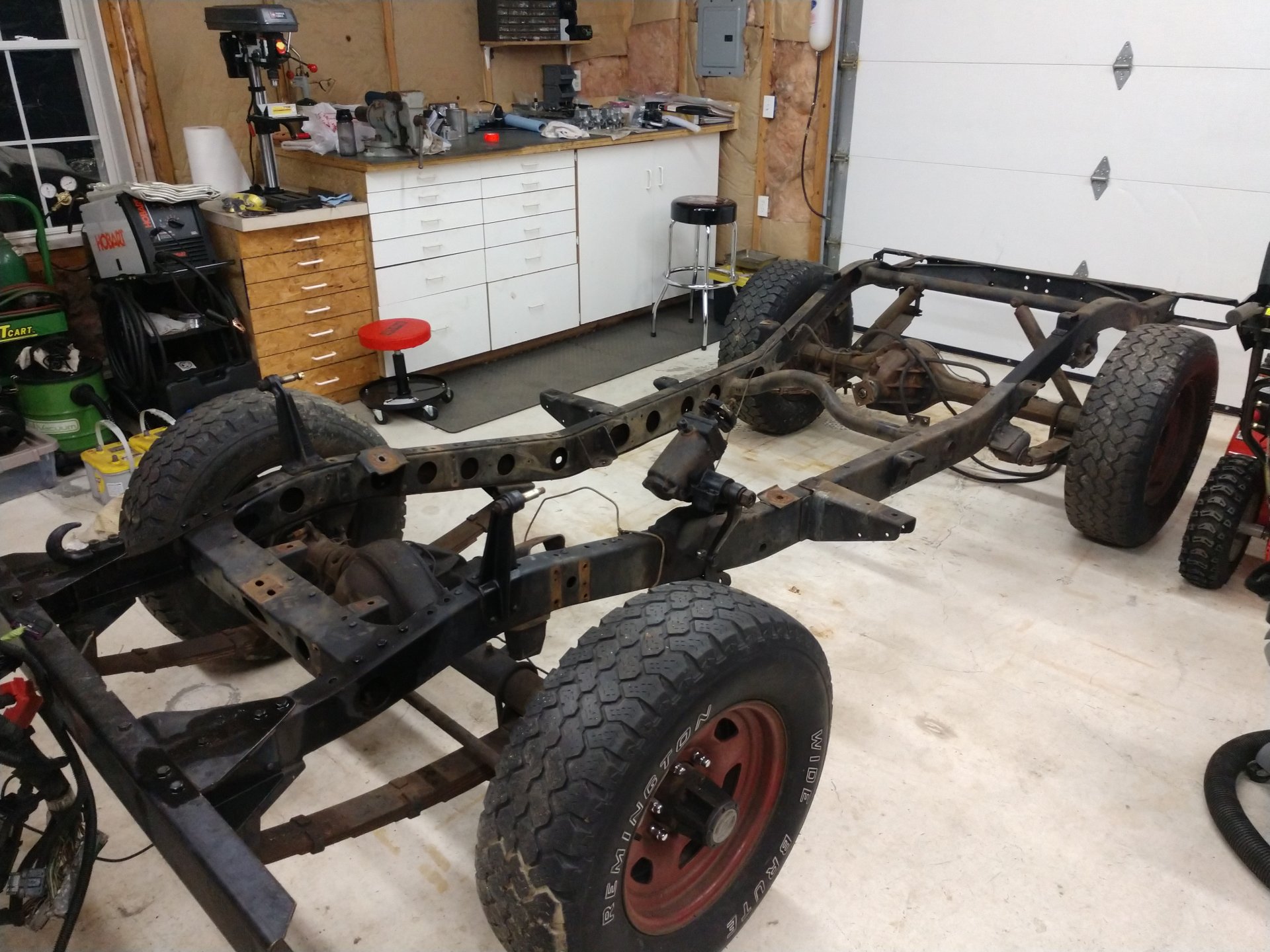 Inspecting all the rust on the frame, especially the driver side. 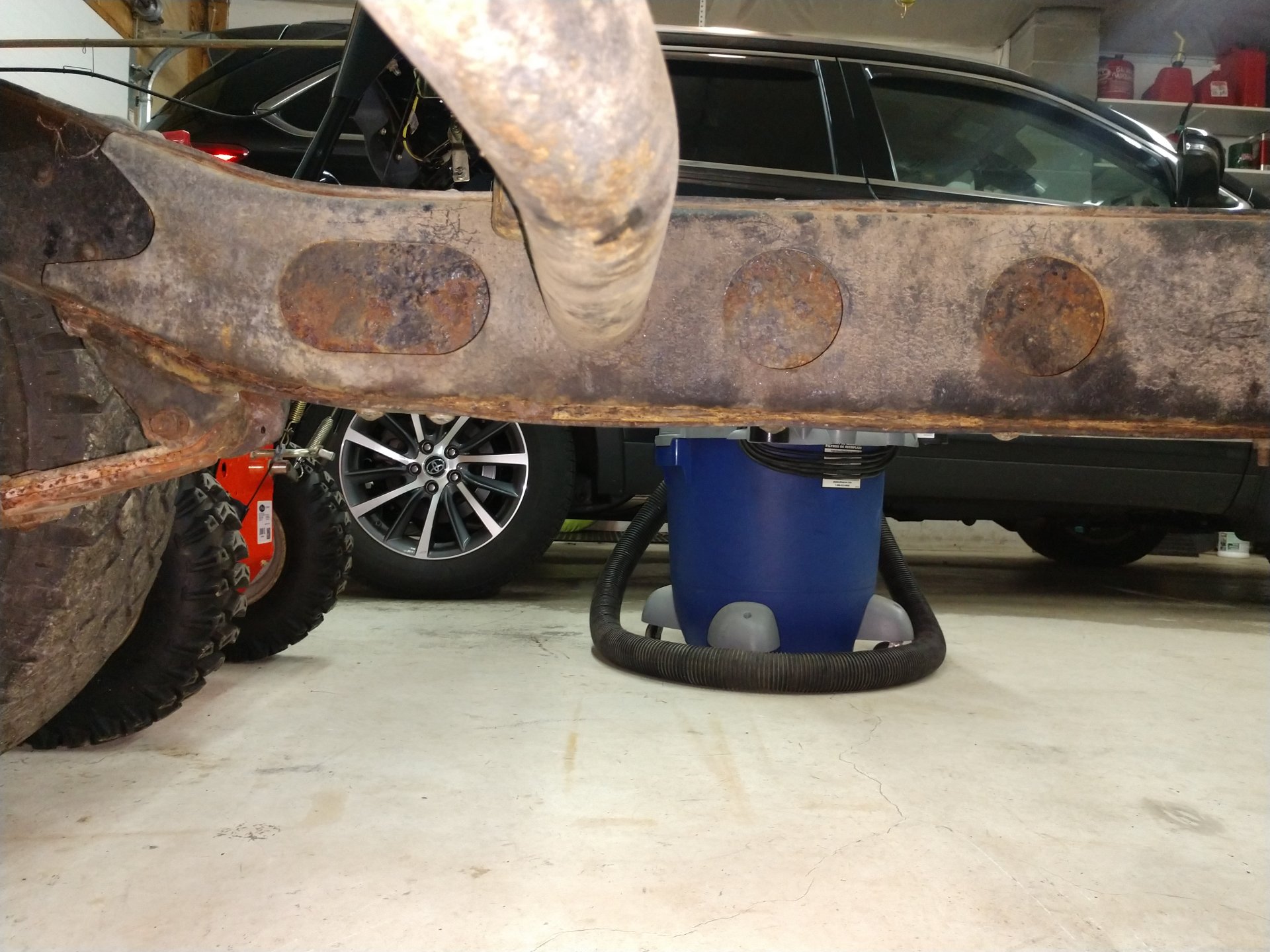 To prepare the frame for sandblasting I need to remove everything off the frame. The only items I left on were the center cross member that is just behind the transfer case and the rear frame channel and supports. I welded on two cross braces towards the front of the frame to provide support when I removed the front bumper and front cross member. Also welded on a couple of braces on the rear where the rear shock support tube was mounted. Also removed the inner frame rail. 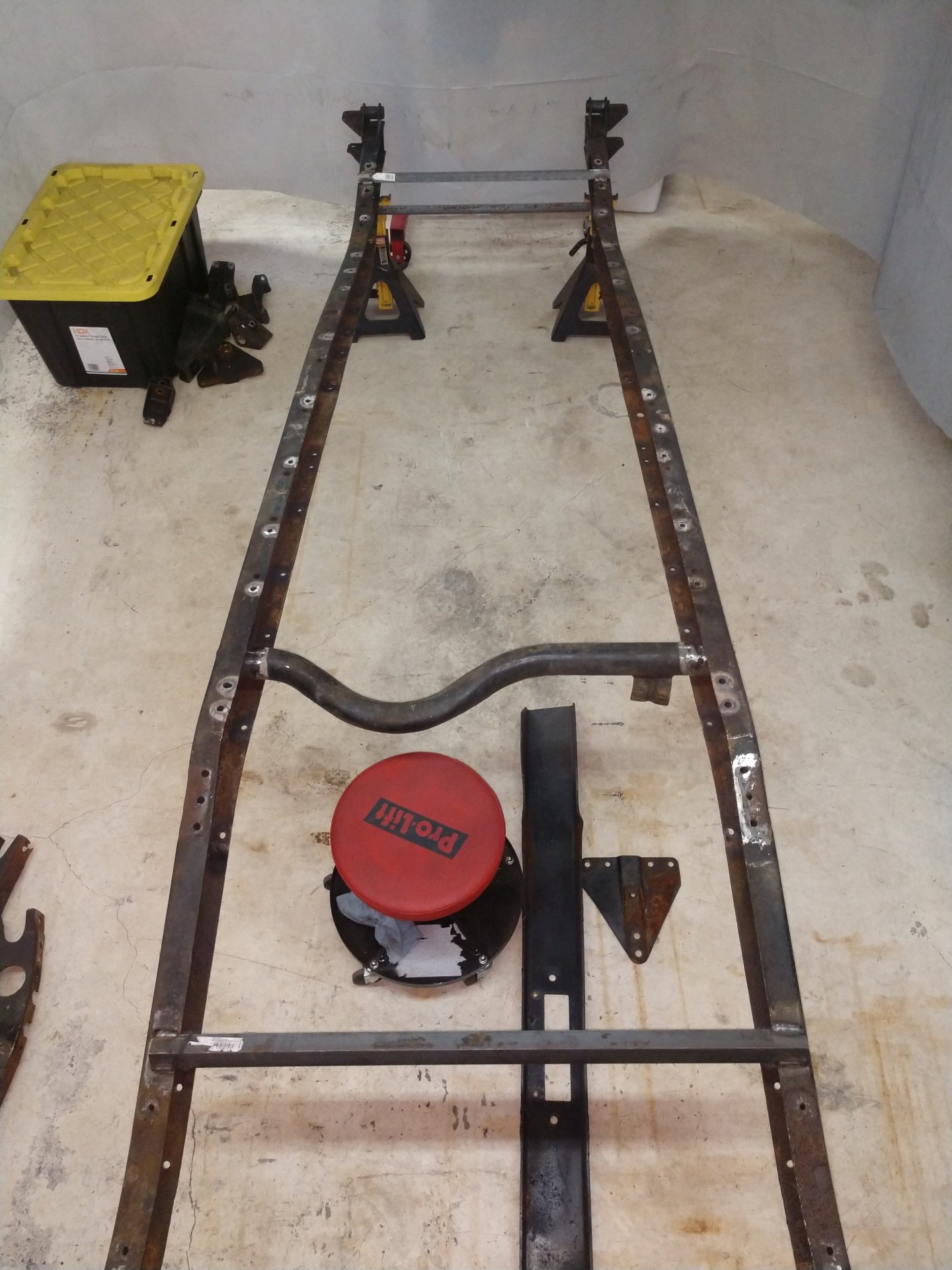 The frame was a little tweaked prior to removing the inner frame rail and braces. Now it is sitting evenly on the jack stands. Looking at the front passenger fender and the front cross brace, it seems it was in an accident on the front passenger side at one point in its life. The front brace was bolted to the frame rather than being riveted.

Got the frame and all the other pieces back from the blaster the end of February. Sprayed the frame with some "After Blast" from Eastwood company to prevent flash rust. This stuff works well as the frame is still bare metal today and there is very little rust on it. 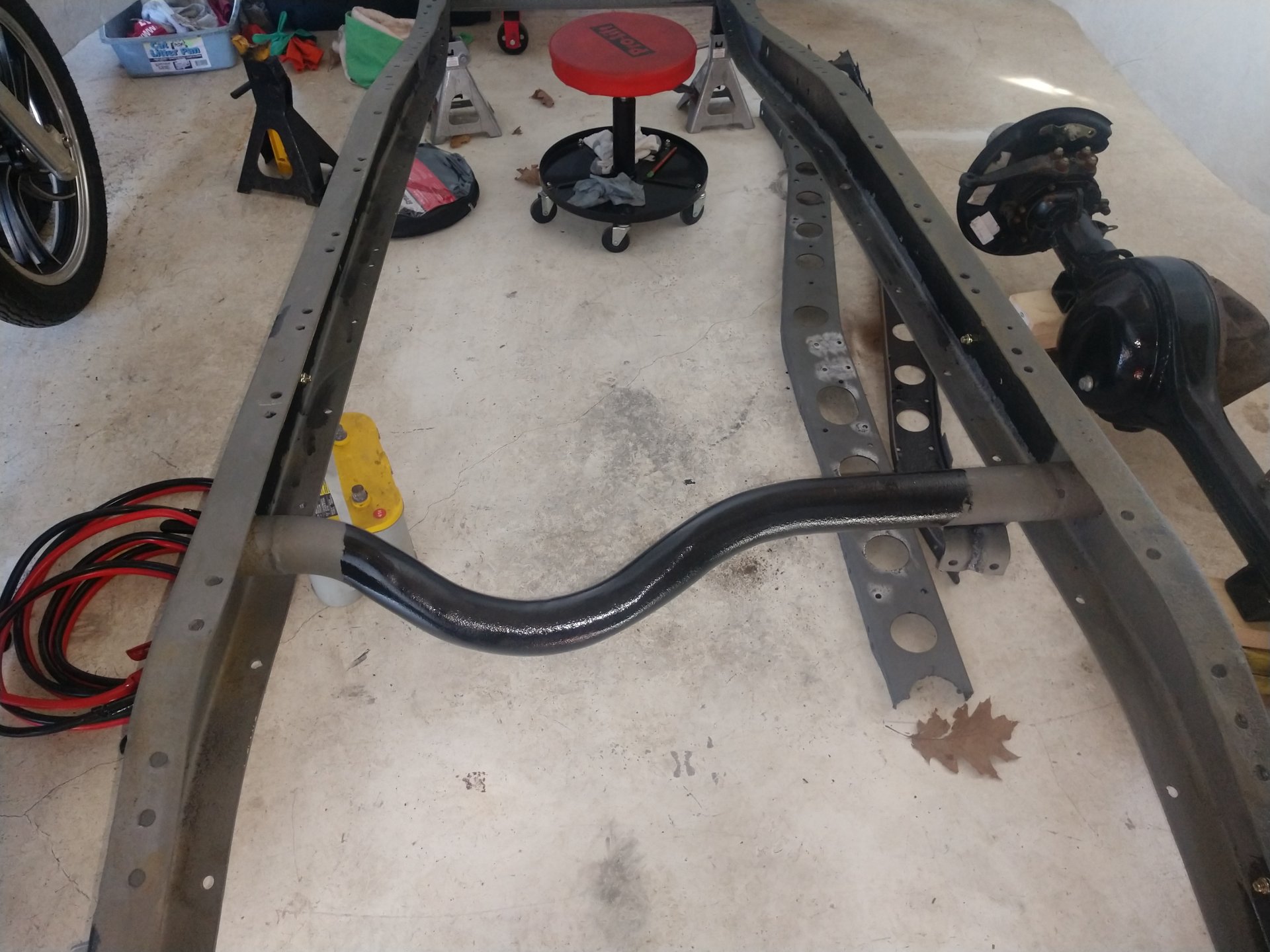 I have repaired/ replaced part of the driver side inner frame rail because it was very thin and would not hold up well to being welded. I plan on bolting, then welding the inner frame rail to the outer frame rail. Not sure if I want/ need to run a weld all the way front to back or if doing three inch stitch welds would work just as well. Everything I have found on "boxing a frame" they fully weld the frame. I have read on Mud that some folks believe the FJ40 frame is meant to flex and others say they prefer to fully box it and let the suspension do the moving. I am not build a rock crawler or a mudder. This will see a dirt road or two and maybe some minor off road wheelie, but not much more than that. Here is a photo of a section I have replaced. 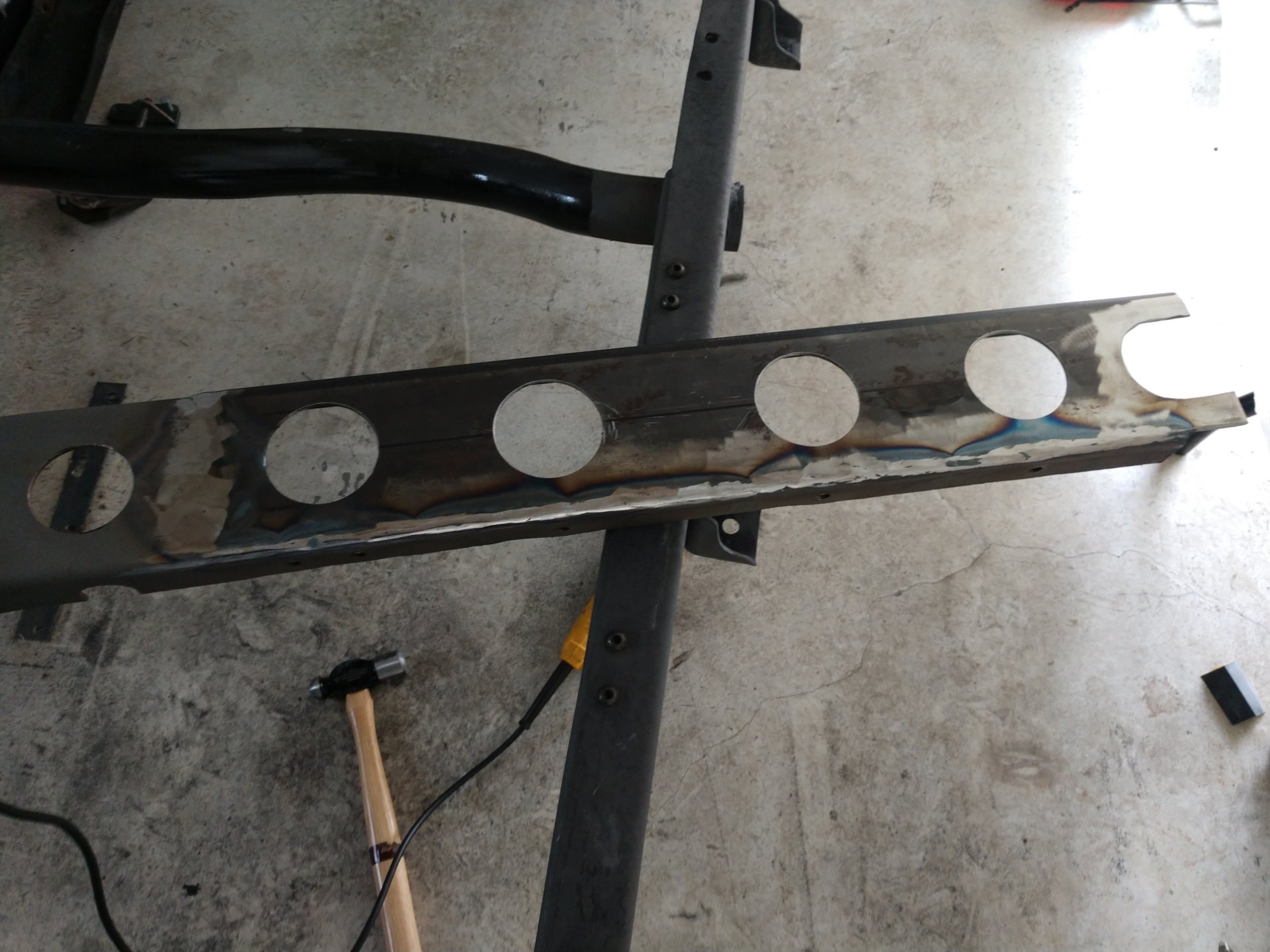 Now I need to cut out replacement inner frame rail pieces that go behind the cross tube support. More time cutting, grinding, fitting, and more grinding. Since I removed the rear tube the rear shocks mount to, I ordered up the frame box kit from Ruff Stuff to replace the upper shock mount. These new pieces give me a template to match the new inner rail pieces I need to make. Maybe this weekend I'll get started on that.
You must log in or register to reply here.

I have questions about the Jeep Wave protocol...
2 3 4