Here are my questions. First, is the F to 2F swap a pretty straight forward swap with out any major modifications? I got all of the external engine parts in the deal. And, is the length of the (post Aug, 1985) 4 speed going to be a problem for the short wheel base of the FJ40? I was thinking of just swapping the motors for now and doing the trannys later.

Will my transfer case be compatible with the newer 4 speed, or do I need to change that too?

One final question. My 69 FJ40 has 79K original miles and has ALL of the original equipment. (even the light that plugs under the dash) Will I hurt the value of my rig by changing the motor and tranny out?

Thanks for your replies in advance. This looks like a great site and I've enjoyed reading all of the helpful information.

A question for you...

What's wrong with your existing motor (why do you want to swap?)?

i don't think it'll hurt the value but the above question is valid.

Keep the F engine and sell the 2F to me, Larry
P

The current 'F' motor hasn't run in awhile and I was going to have it rebuilt. I figured the 2F motor would be a stronger more dependable engine, since it has all the modern technology changes. At least the technology up to 1985... It didn't hurt that my buddy gave me a pretty fair price.

Thanks for the replies.

I've done this swap. '70 F for '81 2F. Better oiling and more power (marginal) in the 2F. Easy swap. As far as value goes you can always keep the F and put it back in later shuld you sell. The only modern things I used on the 2F was the distributer (lose the points), water pump, oil cooler. The rest I pulled off the F. Keeps an original look and with a '69 you don't need a smog pump or a hundred vacuum lines. If you plan on water crossing use the 2F alternator setup. This will put it at the top of the motor rather than the bottom. If you retain the F motor mount brackets you will need to drill the three holes out a tad larger as the 2F used larger bolts. I'm sure there is more but they are minor.
I swapped my F because #1 lost compression and #4 was going downhill. With the low miles one your truck are you sure the engine is bad or could it be a carb., distributer, etc. issue? I have to agree with the others. I'd run the F if it's good.

Here is a pic of the 2F dressed in F clothing. 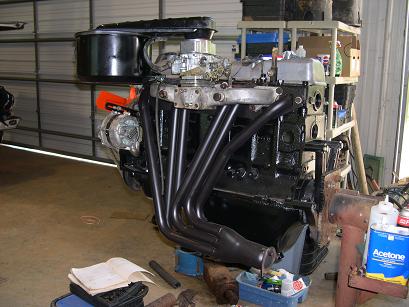 my engine swap was done like that. I retained everything as far as the pully setup with my 2f. If you didn't know what you were lookin at , it might look stock to the untrained eye.
P

I think I'll pull and see what it looks like on the inside. If it looks okay, I just might rebuild that instead. I'll keep you posted on this.

What about the 85 4 speed? Is that a difficult conversion? Not too crazy about 3 on the tree...

My .02 is that an original engine is more desirable only if sold, and to someone wanting an original crusier. If it's a clean looking crusier I'd stick with the F but it depends on what you want to do with it and how modified or not the cruiser is...

Penroseton said:
Here are my questions. First, is the F to 2F swap a pretty straight forward swap with out any major modifications? I got all of the external engine parts in the deal. And, is the length of the (post Aug, 1985) 4 speed going to be a problem for the short wheel base of the FJ40? I was thinking of just swapping the motors for now and doing the trannys later.

Will my transfer case be compatible with the newer 4 speed, or do I need to change that too?
Click to expand...

I'm using the H55F 5-speed tranny. It's about the same as the late FJ60 4-speed, and a little longer than the early FJ60 tranny. I needed to install a 1" body lift to clear the tranny/transfercase. Also, the tranny is signficantly taller than the 3-speed and the tranny "doghouse" will need modification to clear the top of the tranny. Also, the FJ60 tranny is floor shift, and the TC is as well (no vacuum shift or column shift).

My rear driveshaft is very short (18" IIRC). I installed a double cardon shaft in the rear (modified FJ60 front). You cannot use your transfercase with the FJ60 tranny, you need to use the split case. You can install your tranny/tc to the back of the 2F, but I seem to recall the bellhousing bolts are different between the two motors, so save them. Something else to consider is the output flanges from the FJ60 case will not bolt up to your driveshafts. The bolt pattern and size is different.
You must log in or register to reply here.