The finishing on the A-pillar is kinda rough looking in bare sheet, but the interwebs tell me that it's best to cover welds with short strand fiberglass filler to be sure to seal pinholes and imperfections. Only pays so much to make it look perfect in bare metal if you plan to skim it anyway.

Chemical strip mostly. Lots of sanding too. Everything gets some DA lovin' to 80 grit eventually.

About half way between big rapids and grand rapids.

Not a lot of updates with pics. I'll add pics to this post when I get them up

disassembled all 8 hinges and sandblasted the parts. My powder coater died about halfway through. Picked up a new one today. New hinge pins and bushings came in this week.

POR-15ed the hinge buckets. Sandblasted and primed the front hinge side jam covers.

Spent a couple of days digging window sealant out of the front and rear window jams. Patched a few rust spots.

Gapped all the doors. The only one with a problem was the driver rear that I replaced the door skin and the quarter panel on the same gap. The door skin was OK, but the 1/4 patch had shrunk a bit at the weld and pulled the jam away from the door. I cut a vertical line down about 1/4" from the edge of the jam and moved the metal until the gap was 3/16' from the top to the bottom, then re-welded it back up with a little filler piece where needed.

DS rear jam. Rebuilt at the bottom. POR-15ed. Hinges powder coated with new bushings and pins. The upper bolt hole was re-tapped for a 3/8. I don't like it and will heli-coil back down to a 5/16 so all the bolts are the same. The rest of the bolts are new self-centering flange bolts in black coating. Imperial fasteners are so cheap it doesn't make sense to clean stock bolts.

DS front jam with the hinges in. There's a big harness grommet that goes through the part that masked off. Everything inside there is POR-15ed. Covers go over the hinge buckets. They are sandblasted, primered, and the insides painted gloss black. When I paint the jams, I'll paint the outsides of the covers in base clear.

PS hinges rebuilt and hinge covers. I need to touch up the pins. I didn't powder coat them because the powder is too thick to fit through the new brass bushings. The pins for the spring are not available and were not worn so they just got sand blasted, primered and painted.

door gap repaired. The filler is just roughed in with a quick pass in 80 grit before the door was fitted again. so a bit of work to do there yet. 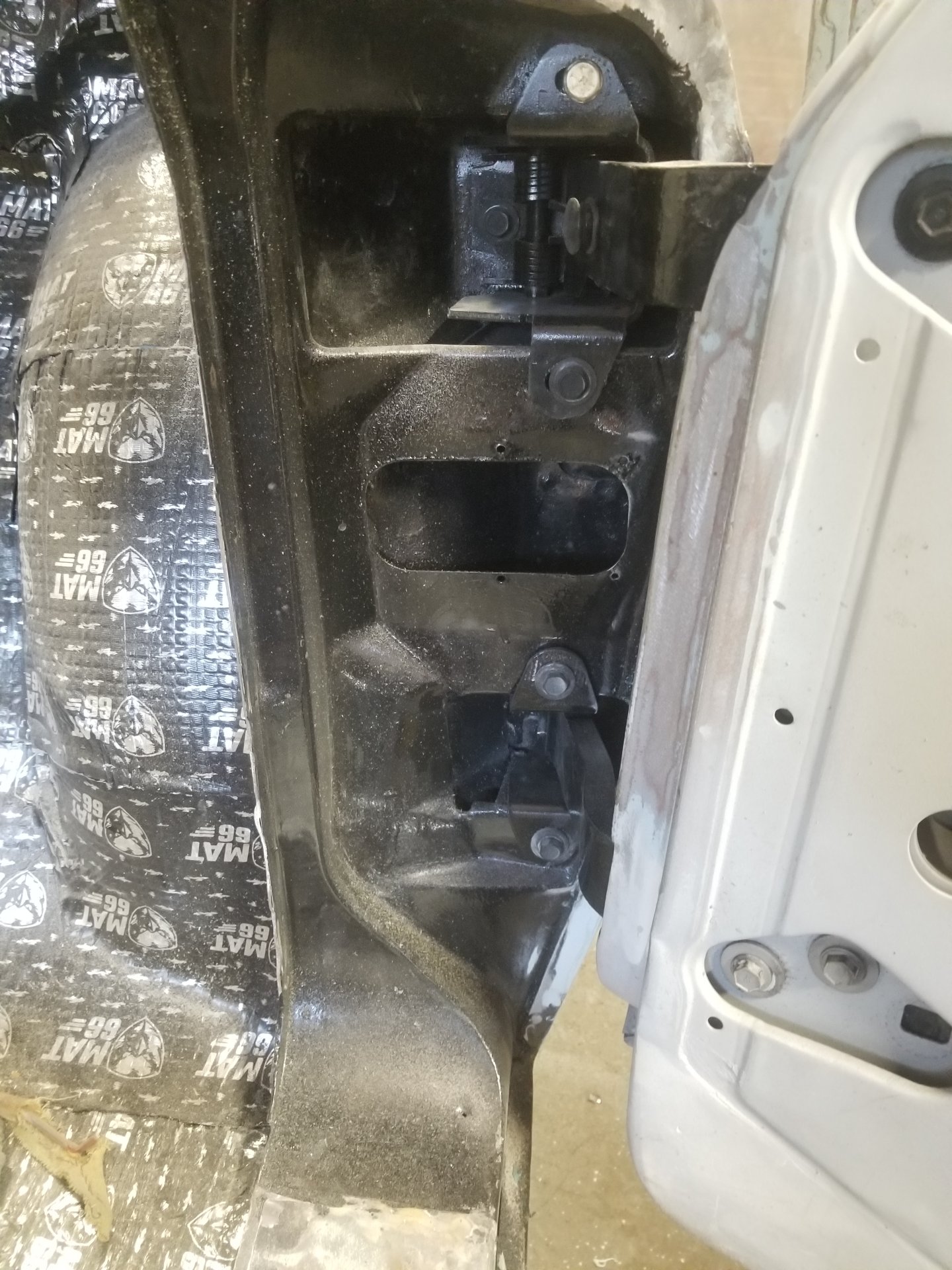 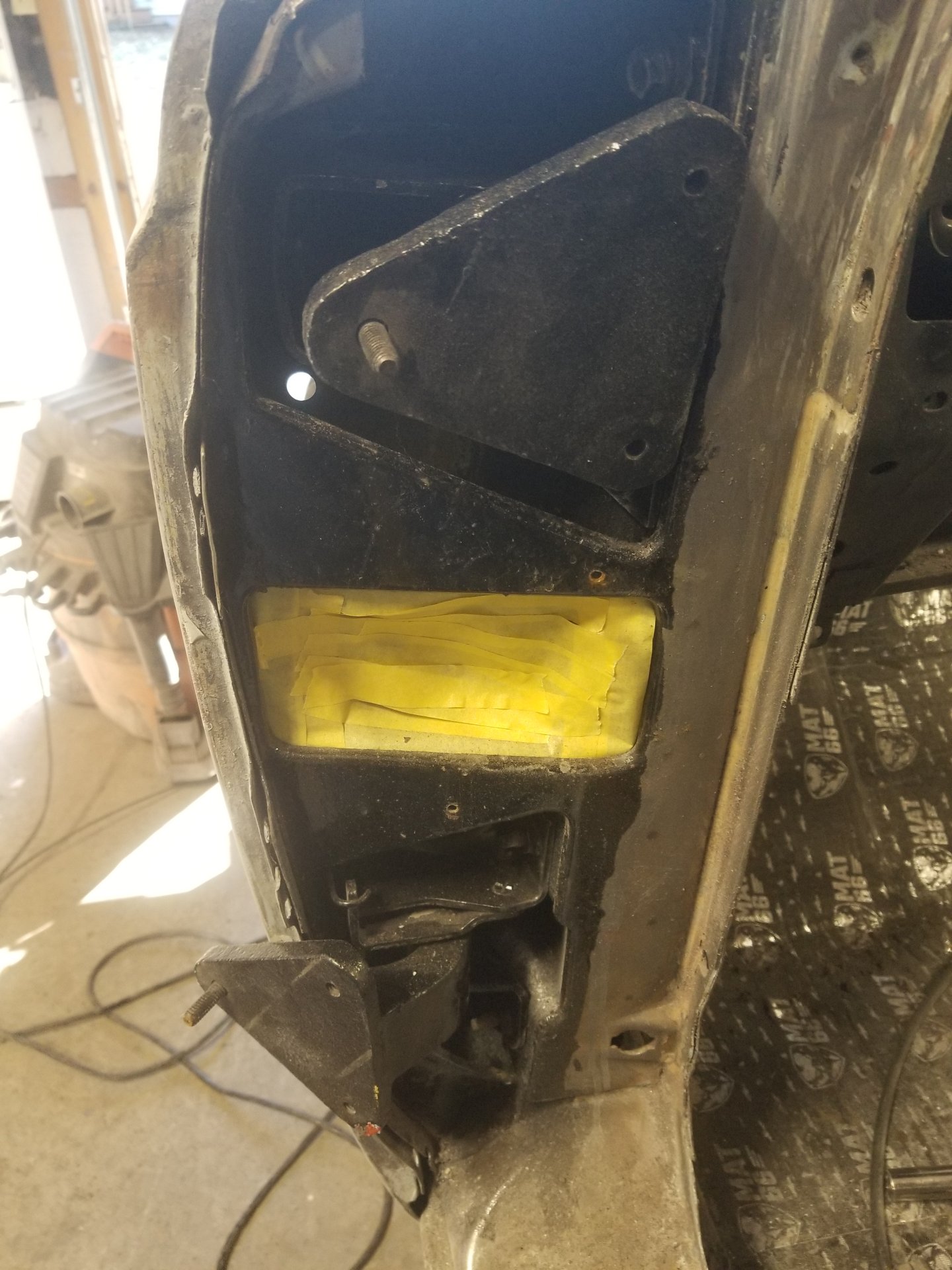 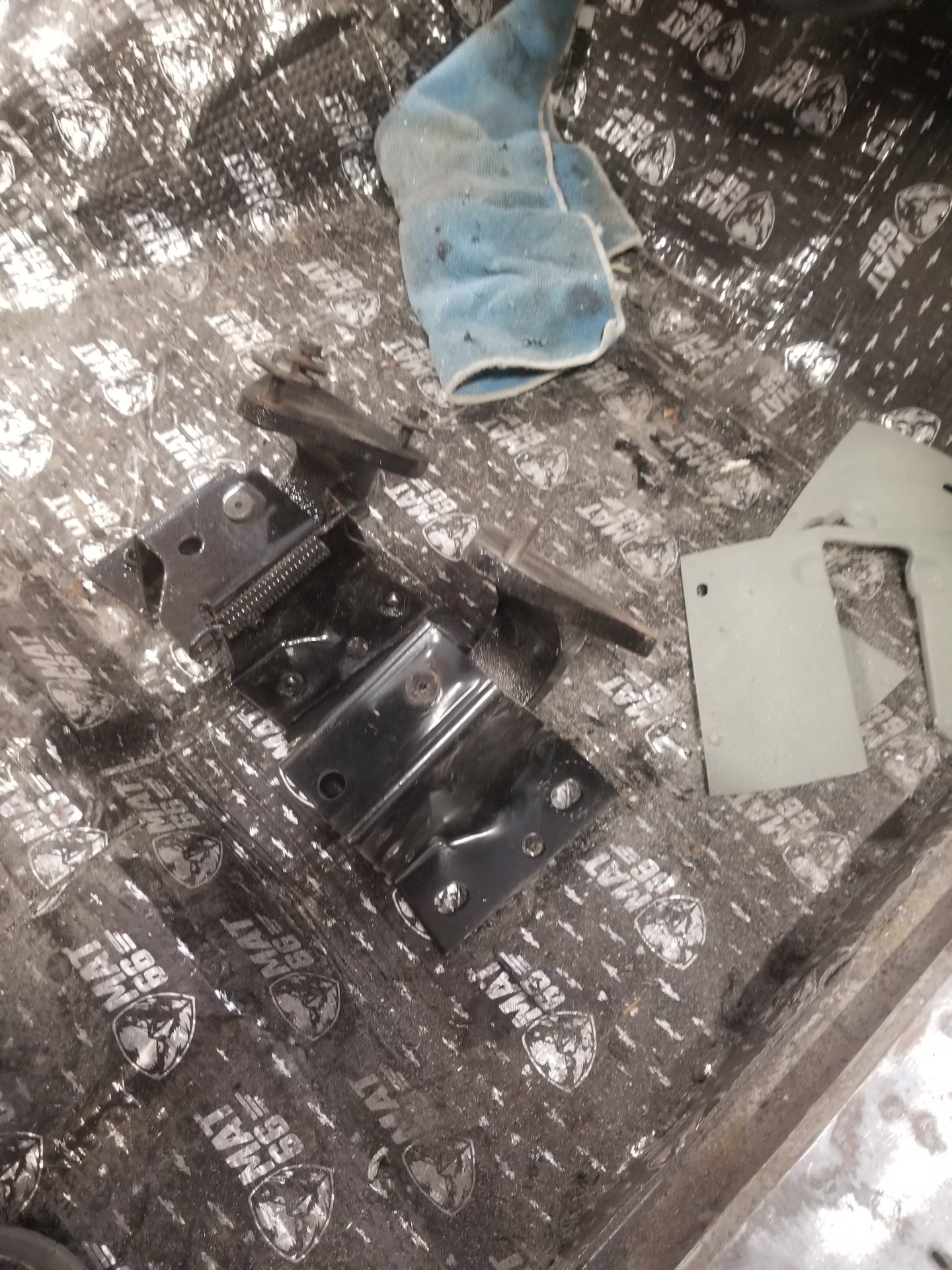 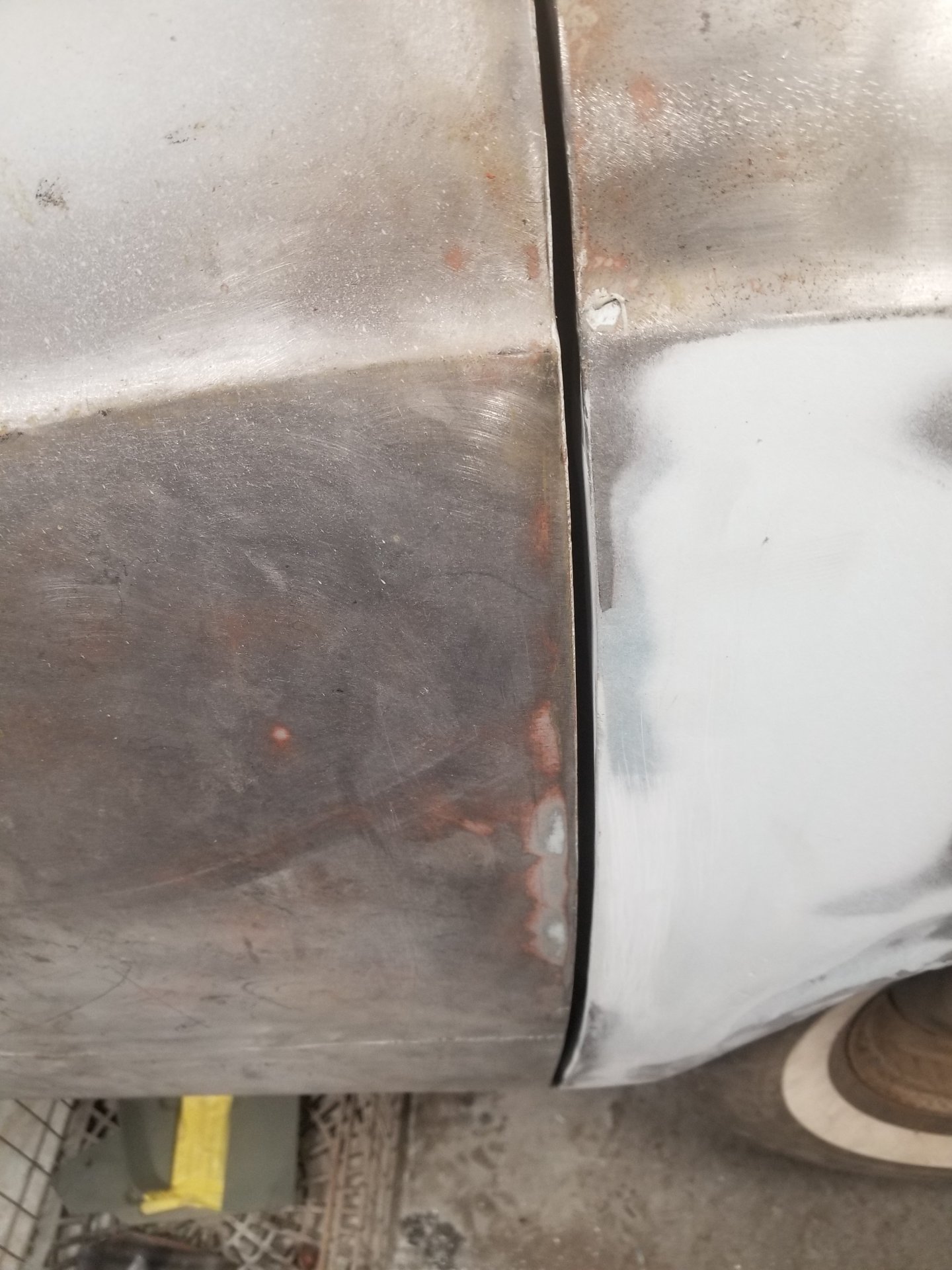 Man once this is done, that is going to be real nice.

Been on Spring break all week so I felt like I made some progress. Spending 9 days in my shop working on a project sounds so much better to me than getting on a crowded plane and sitting doing nothing in the warm for hundreds of dollars a day.

Finished the wheel arches, mostly. One patch on the DS and two on the PS. Once the big patch was in on the DS I found out how bad the purchased 1/4 patch was I bought. $256 and I needed to shrink both ends to match the door and the tail curves. The big reason I bought it was the fading away flare on the arch. Now that it's matched up to something other than air I can see it's probably a 1/4 inch too pronounced. I'm going to cut a kerf through the part and try to bring it together, but I might just have to make a new piece. The way I made the flat edge to the rounded curve was to cut shims from sheet to place under where it was going to be flat and then hammer the curve into the unsupported part with a teardrop mallet. Easy to make the curve different depths by changing the shims.

Built a trunk drop. It was a big job because it had two breaks and my HF break can't do that long of a piece in 18g. I ended up using the edge of a metal table and an I-beam, them hammer forming the break. Probably would have been easier to put the break in with a tipping die on the bead roller first, but I didn't think of it and it wouldn't have been as straight. The other thing was a curved and tapered feature that I'm sure gave it strength and is where the exhaust pipes go. That part I just had to make the matching half. I used a shrinking stump and a teardrop hammer to form it, then a heel dolly and body hammer to make it straight. I only made it so straight because it is a trunk drop that you can only see part of from underneath. The inner part in the picture is not visible at all. It did get POR15 even though it will never see the miles or weather that caused it to rust before.

Now I just have to build one for the DS. I didn't have a reference point for that side until I put the outer on. I'll do that one when I put it back on the hoist in a month or so. Few more patches in the wheel wells will get done then as well. I want to be able to drop the axle and stand in the wells.

POR15 on the PS hinge buckets and inner cowl area and tail piece that's behind the bumper and trim. I'm digging the 6 pack of little cans. The quarts are a pain to store. Even if you do the plastic under the lid trick, you end up throwing a bunch out.

Outside of the quarter behind the wheel well is just a big sheet of 18g with a roll at the bottom I formed with a 2" exhaust pipe and some 2" angle. I clamped the sheet between them in the vise and rolled the sheet over the pipe, then bead rolled a flange and put the big radius in over the side of my shrinking stump. 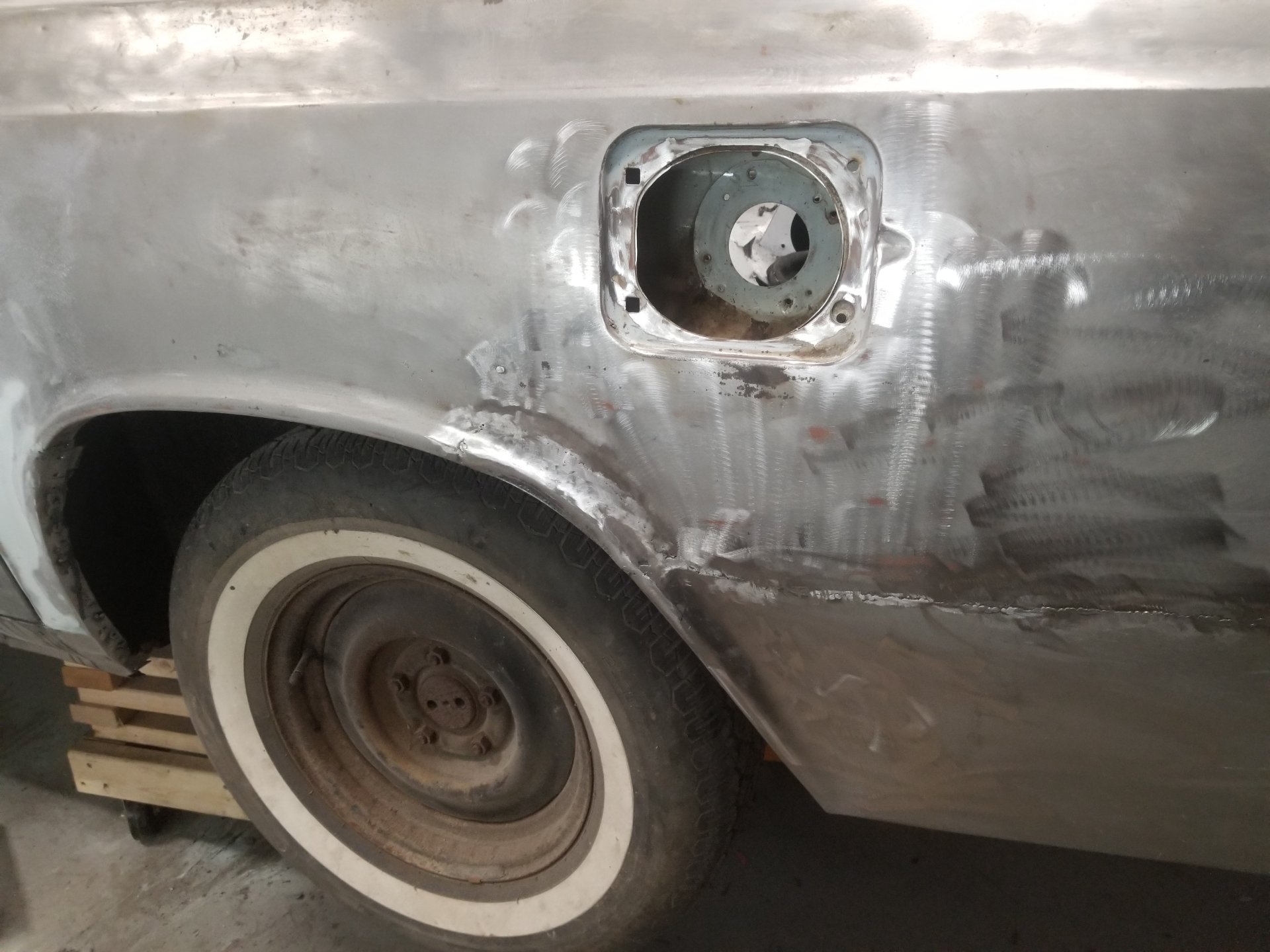 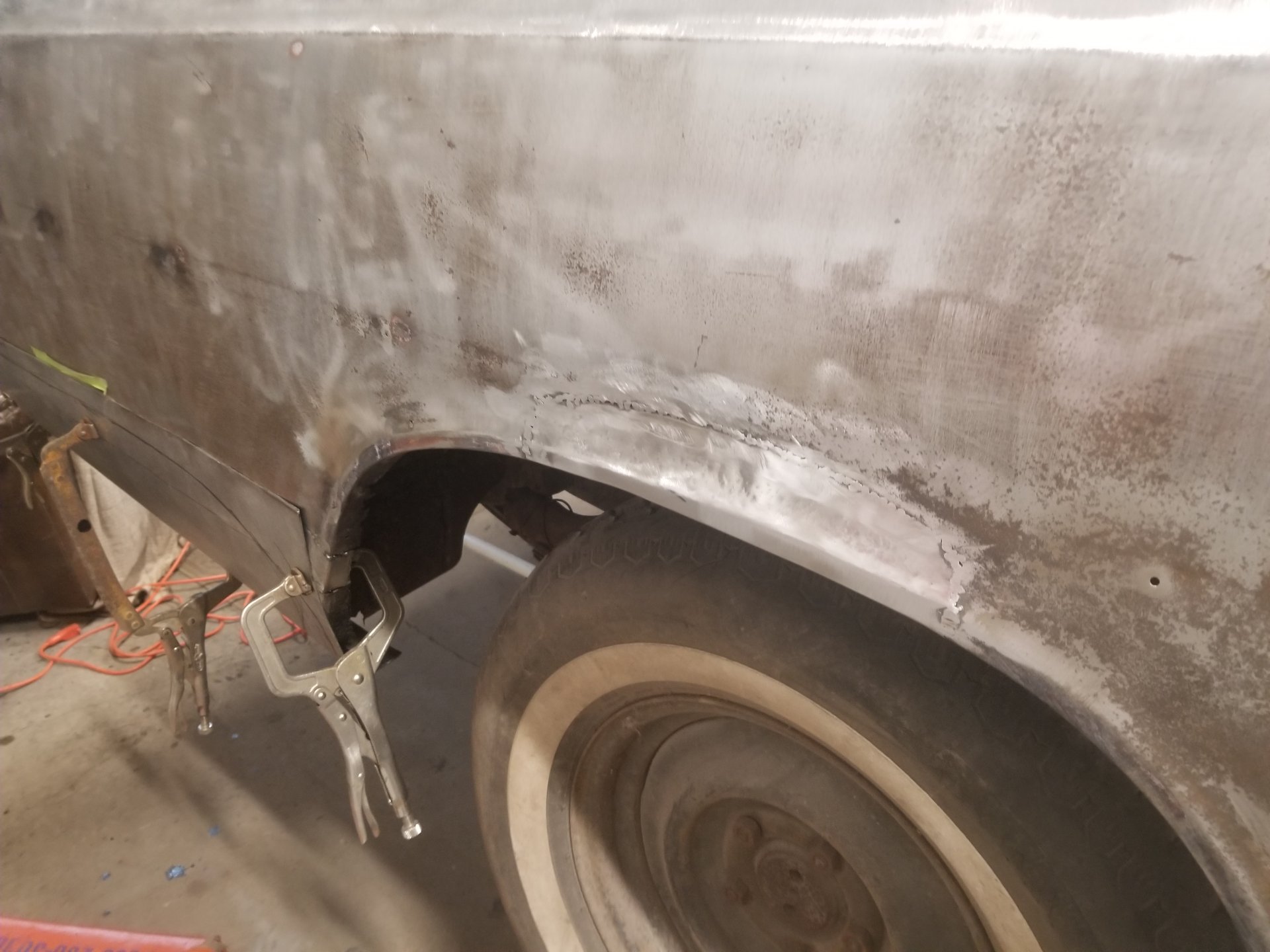 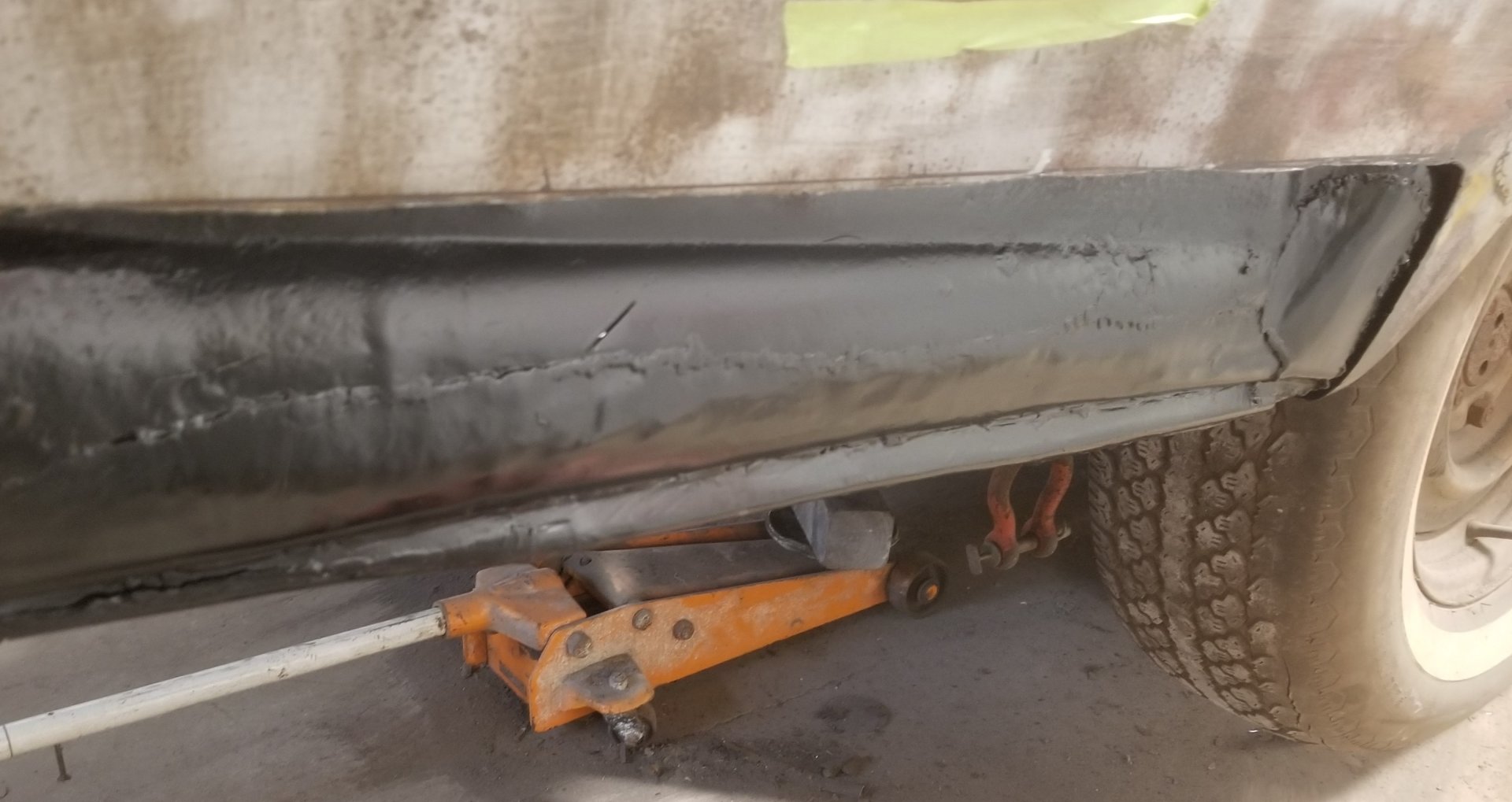 cowl inner painted and cowl sandblasted and scuffed with 80g 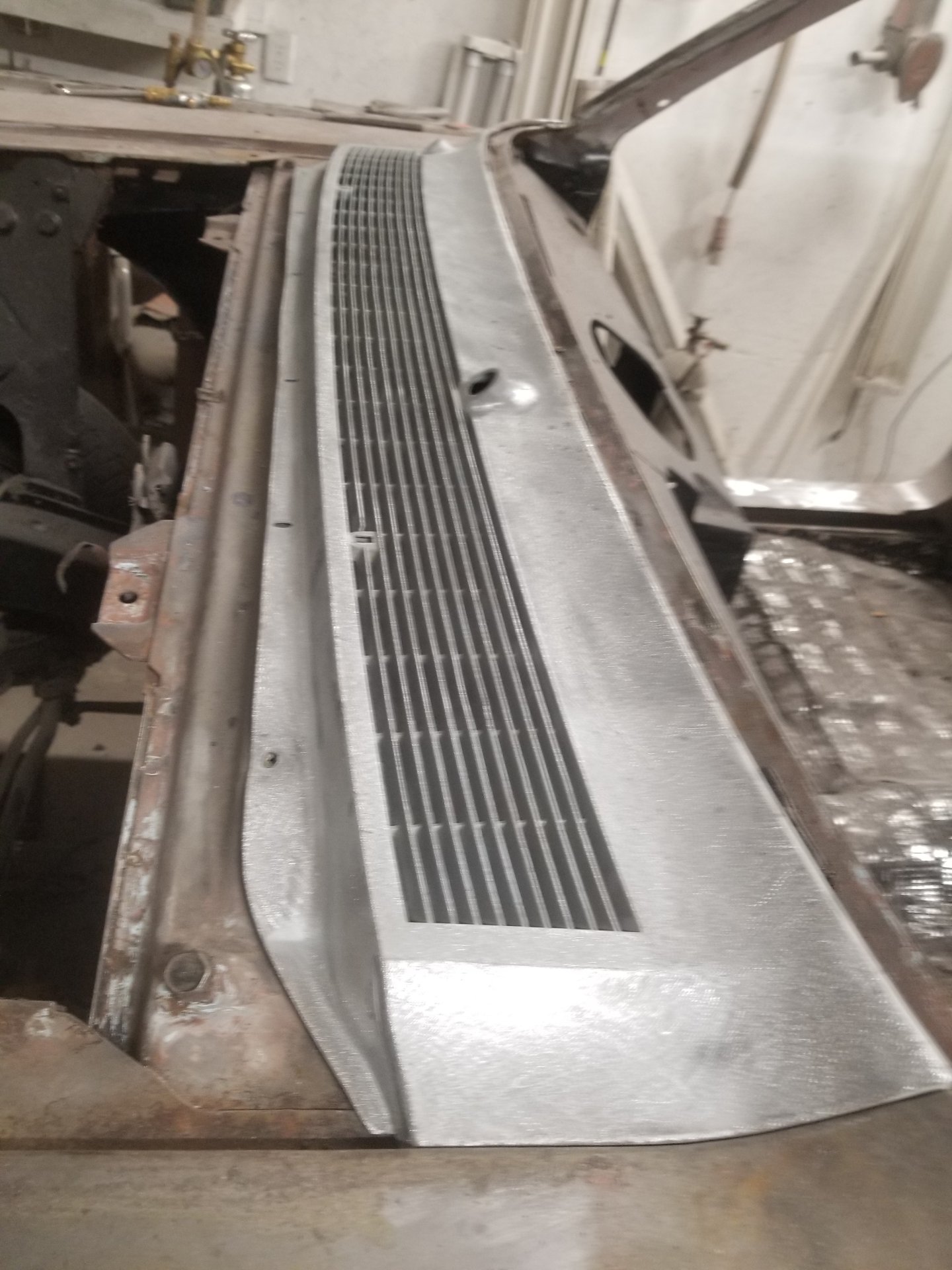 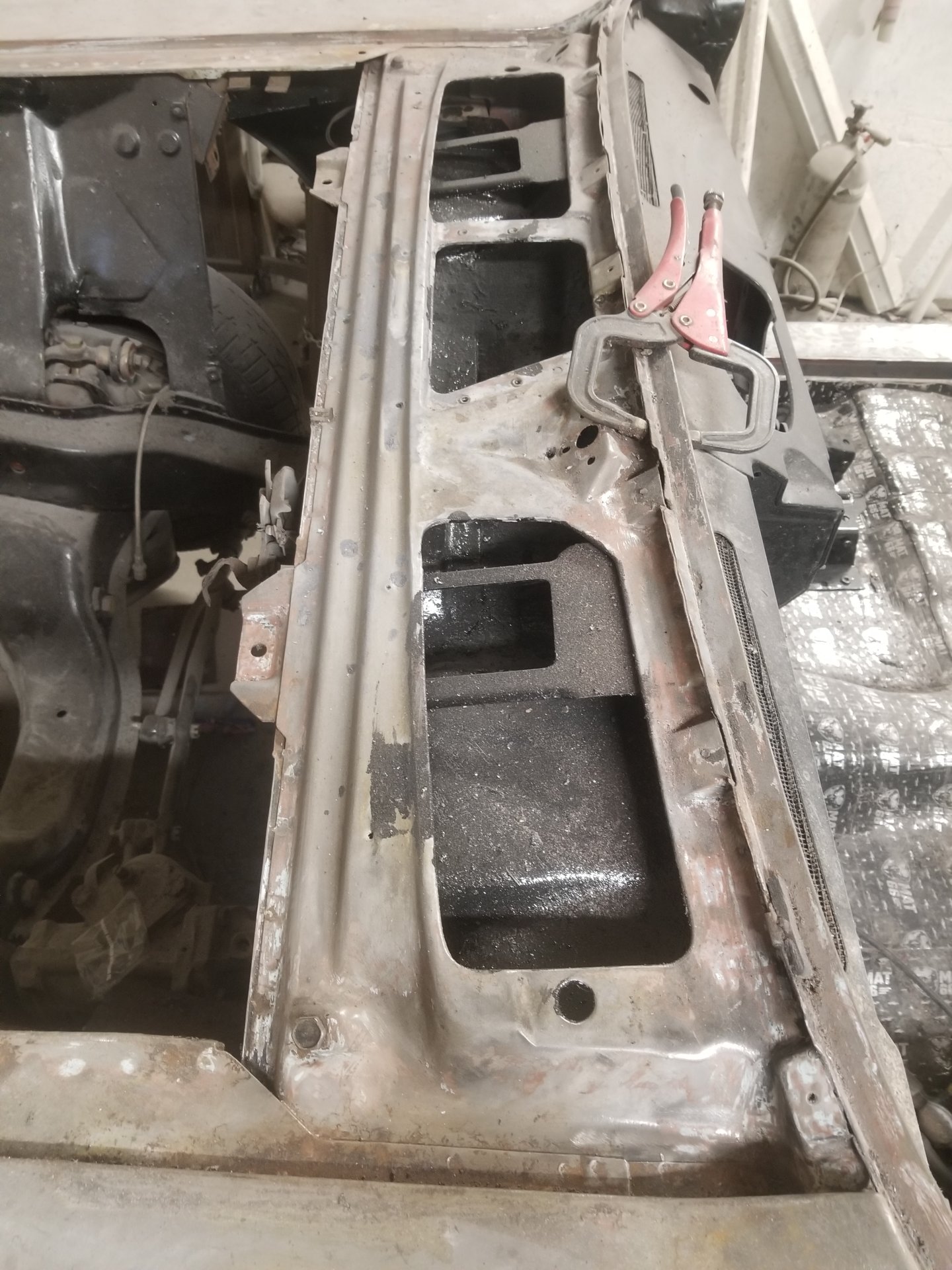 So, I gotta do some research. I've seen a B-J listing that claimed the owner had the factory door pillowing taken out. I've also seen a Devious Customs video where the owner is talking about taking out the pillowing that happens over time. Devious' guys are using a torch to heat shrink the door skin so it pulls tight again.

That's really scary on a black slab side car. It'd be really easy to warp the bejeezus out of the door skin.

Sylvester's Customs puts filler across the door gaps, body works them with a long board then cuts them apart when they are flat as can be to each other.

If it's a problem that needs to be fixed, I'll fix it. If the factory put a crown in on purpose then I'm not. but I am worried what it'll look like.

The doors start pulling into the edges about 4" from the edge on either side. At the gap it's 7/32" in from the flat center of the door. It's pretty consistent at the fender and 1/4 panels too. The other doors are exactly the same. I'm thinking it's gotta be put there on purpose and they didn't look bad new.

The pic is looking down on the doors. The aluminum straightedge is going vertically up the left. The doors are on the right. I can just slip a 7/32 drill bit in the gap between the straightedge and the edge of the door. The straightedge is flat against both doors for 18" or so. 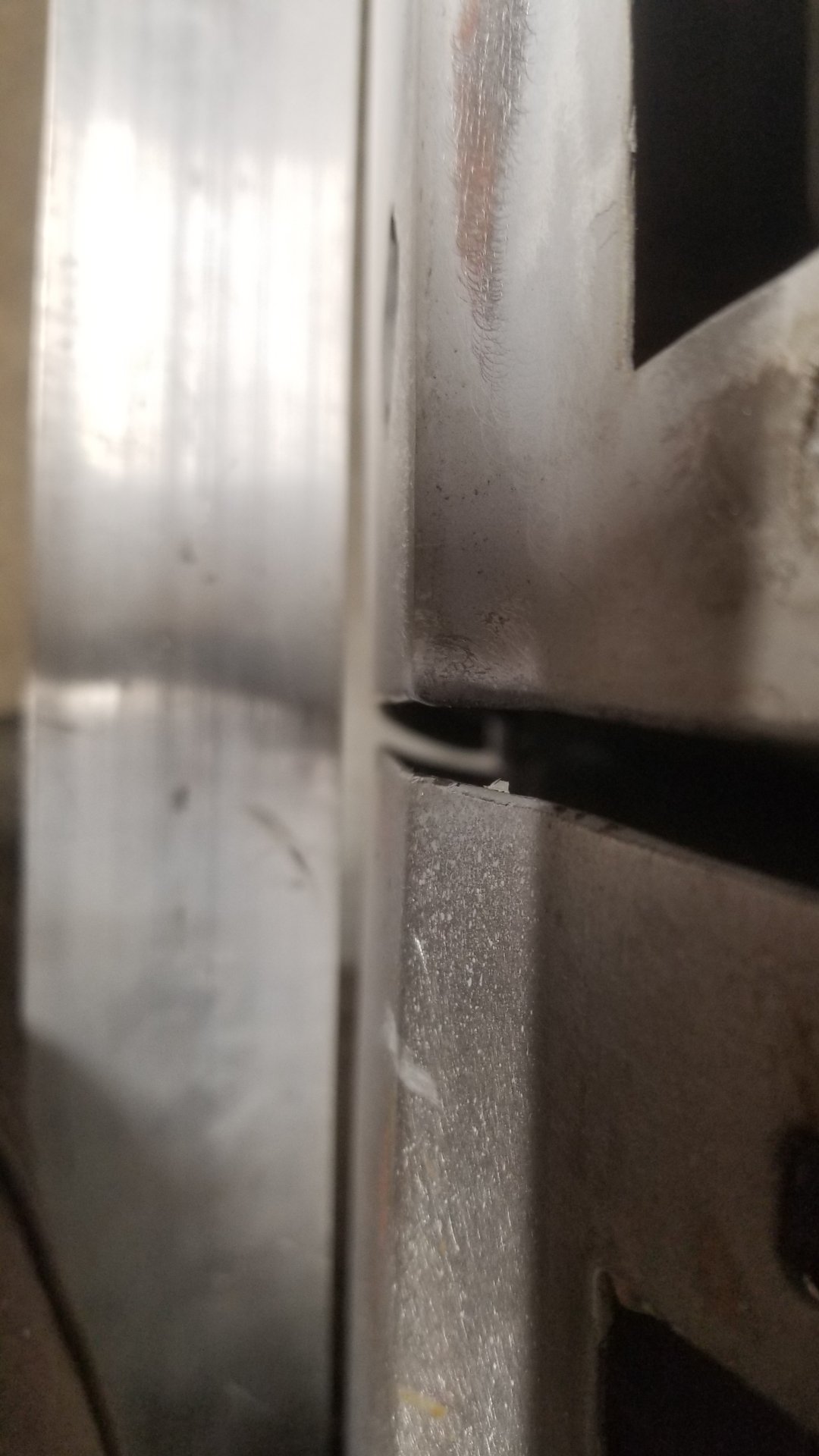 Looked at a bunch of pictures online. It looks like most have a dip at the door gaps 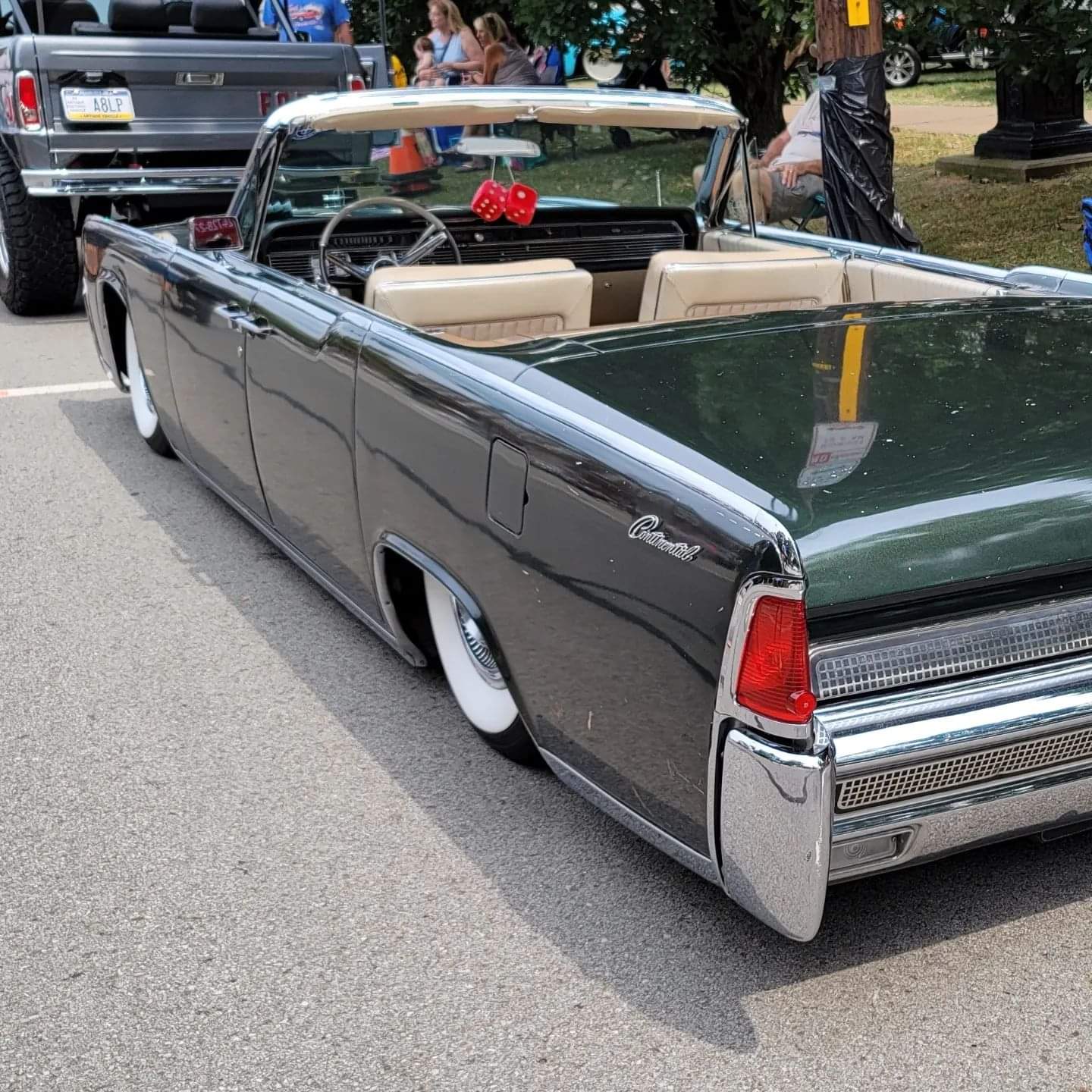 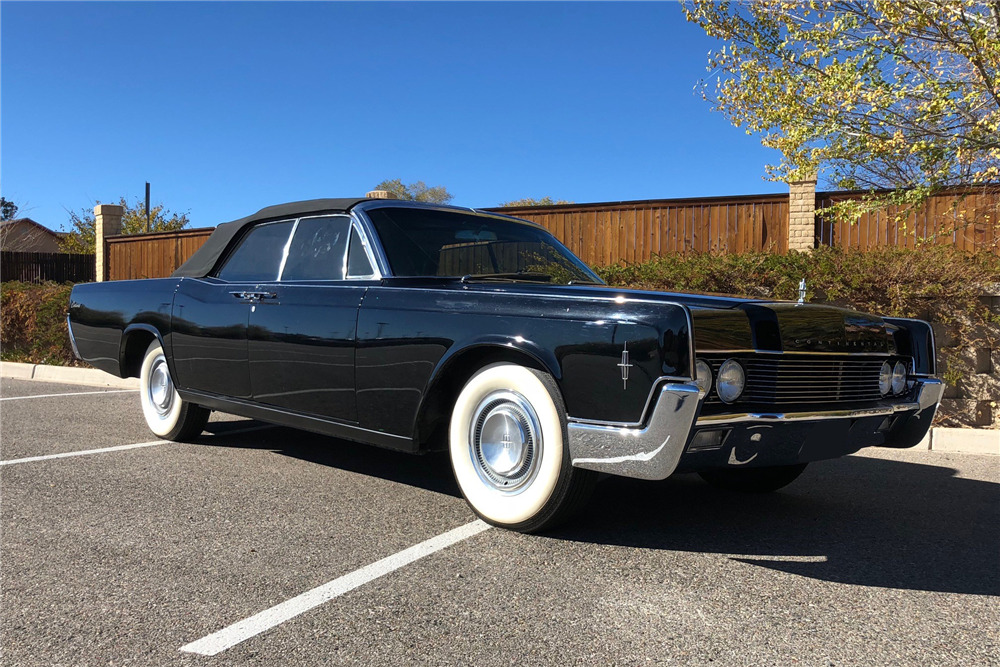 I believe on most of the older stuff, the "dip" is there for clearance to open and close by the fenders to some degree.

Also, where the material is folded over multiple times on the back may tend to round them in as well as the heat shrink from any welding on the edges.

Personally, I like a little dip at the doors, as that makes it look real, and more factory.

So much stainless. Theres gotta be 150'

Some progress. Polished some more stainless. I'm starting to get the hang of it.

Finished welding everything above the rockers. Really, the only metal left to replace is in the rear wheel wells, mostly where the inner wheel well meets the quarters. I did some when I fixed the doglegs on both sides, but I really want to get in the wheel wells to do the rest, so I moved the car from the body shop part of the garage to the hoist side. It's warm enough now that I don't need the heat. Now I can drop the axle to refurbish it and stand in the wheel wells to finish the welding.

A problem was the whole car was in bare metal and it gets so wet here in the woods that the steel would be dripping wet when it got very humid. So I put rust inhibitor over the whole thing, sanded it with 80g on the DA and sealed it with UPOL DTM sealer primer. I still have a bit of hammer and dolly work to do and most of the body work. I want to have the welding done first though.

I missed a door jam. 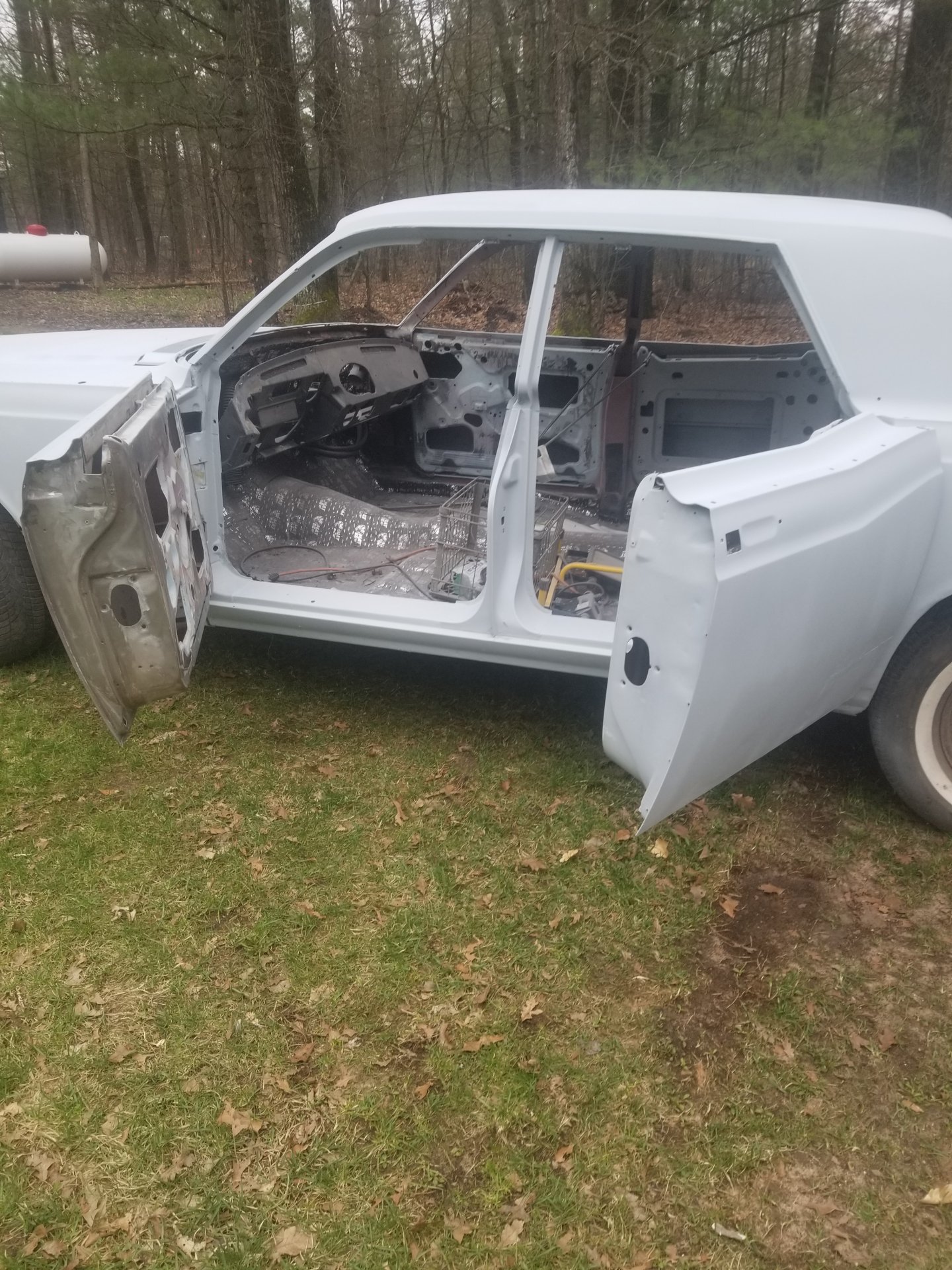 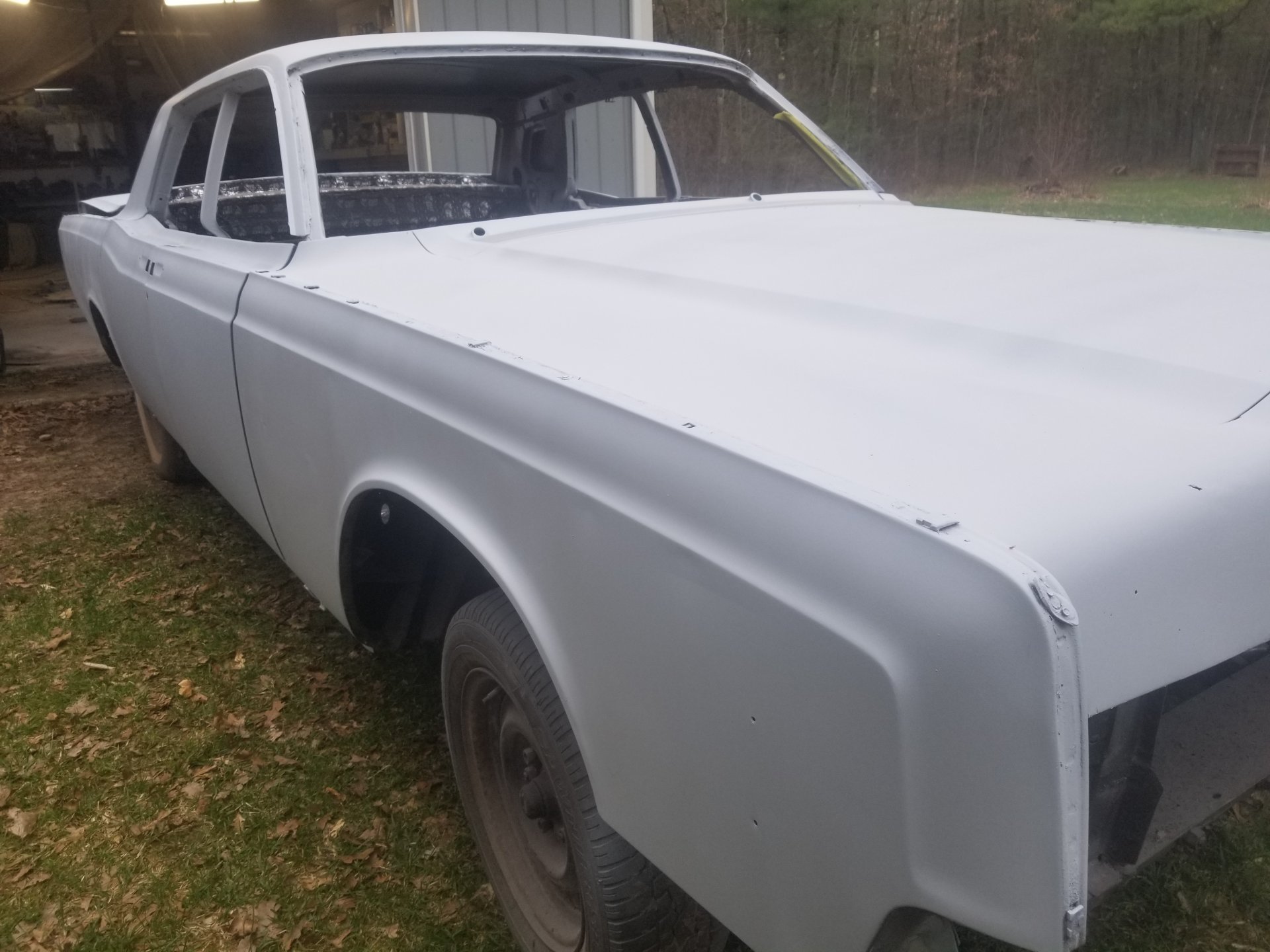 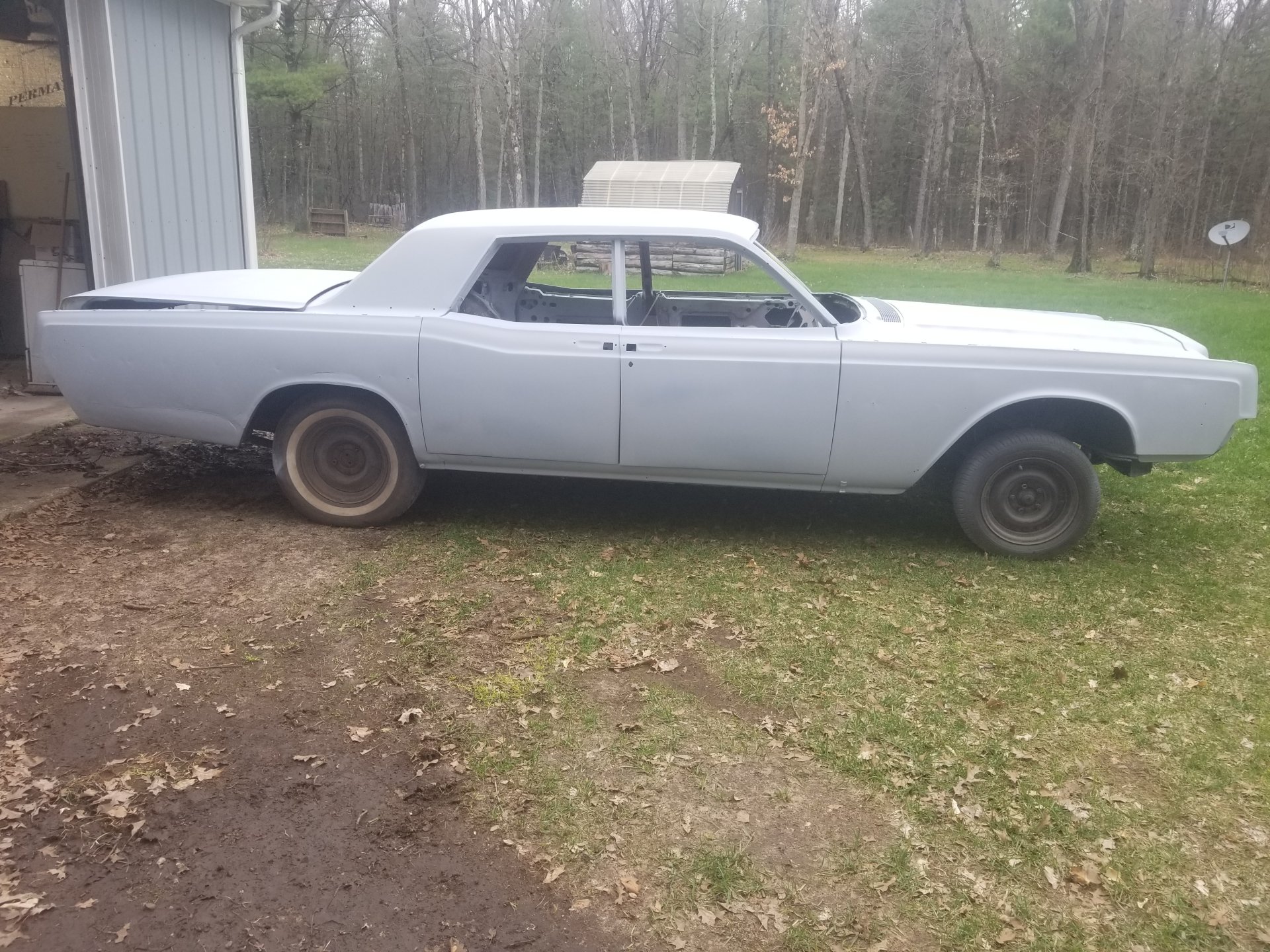 I should really stay off of CL

The guy took the ad down already.

Back in 1982, we were given a weekend break during Basic Training at Fort Lewis, and I rented a '69 Lincoln Continental from a local rental agency, which I drove up to Seattle.

Loved that car. Wished it were mine.

Great build; brings back great memories.
You must log in or register to reply here.