I like the FJ60 ARB winch bumper, does anyone have any close-up pictures that show how the winch mounts to the bumper?

Is there any competition as far as another well designed winch bumper that will use mainstream warn winches?

I have a XD9000i warn winch on another truck, but I'm told it will not work on the FJ60 ARB winch bumper, due to mounting considerations.
Last edited: Jan 27, 2009

It may be different with the newest generation model...ARB has a fitment chart on their site that lists which winches fit which bumper. They like to accomodate Warns....

looks like he's right, they excluded the "i" version. You could always trade winches w/ someone
Last edited: Jan 28, 2009
N

Tight fit
Heres my arb bumper with an M8000 warn in it. It has 4 bolts that mount onto the front of the bumper. The 2 lower ones are obstructed by the guard covers. The second picture is the 3/4" space where the nut is. Its a real pain in the a$$ but doable. Hope this helps.
Pictures are a lil fuzzy. stupid phone cam. 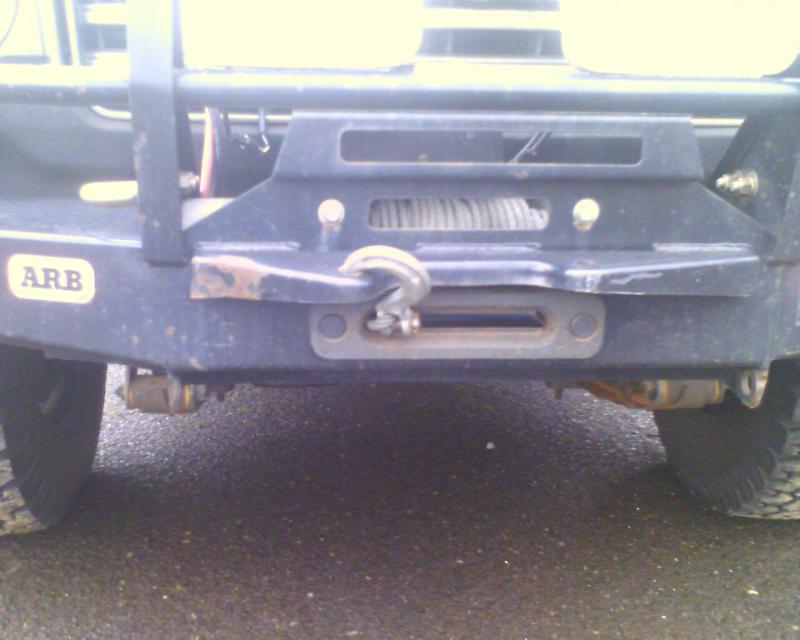 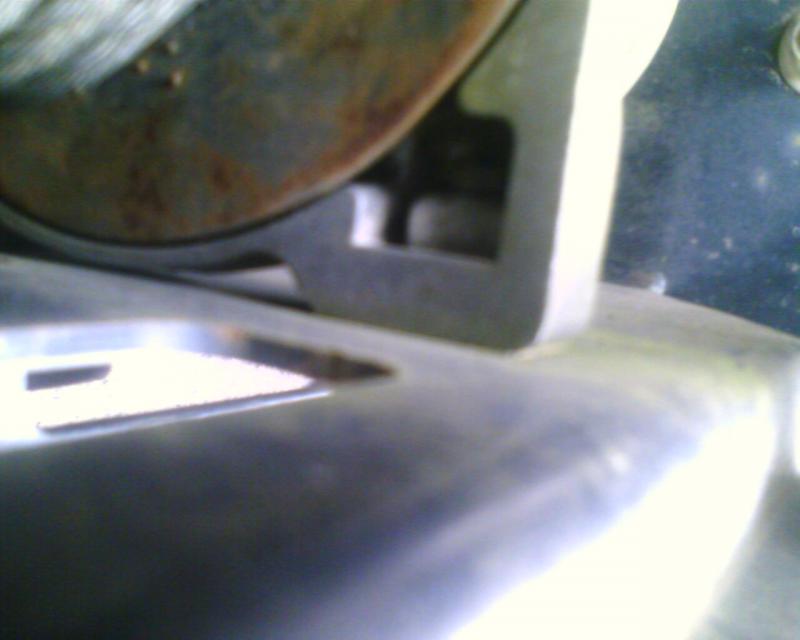 I have the new style ARB and can take some close-up pictures for you. You could make an adapter plate but it might not mount because the bumper interferes with the solenoid pack on the winch. It might fit better on the the old style. You talking about buying a new ARB?

yeah I'm thinking about getting the new ARB... which means I have to get a new winch too at some point.

I have the older ARB with my XD9000i sitting in the shed. The cooling fins around the winch motor make it just (1/8")too wide to fit in the bumper. I haven't tried to modify this yet, also because the solenoids are integrated it is designed to sit upright. I thought about relocating/rewiring the solenoids into the engine bay somewhere, cutting the top of the housing off and mounting it on its back, if you will.


I'm not sure what I'm going to do... I'm going to sell the other truck and the winch may go with it. Or I'm just going to keep the winch. I don't want any more "stuff" under my hood. Of cource I don't want to jump off and buy a brand new winch right now either. SO I may just have the bumper a while before the right winch. Do you have to remove the bumper to install the winch?

Thanks for posting the pictures.

Yeah, these are merely plans. I haven't done it yet. My winch is pretty ratty and well used so I'm not too concerned if I F it up.

this is link to my 12 warn install in a old skool low pro bumper .... the biggest deal with the XD9000I is its solinoids will be in your radiator due to the foot forward mount on a ARB you would need to make a mount to mount it up right like I did on the buggy just in the ARB ....a welder fixes all 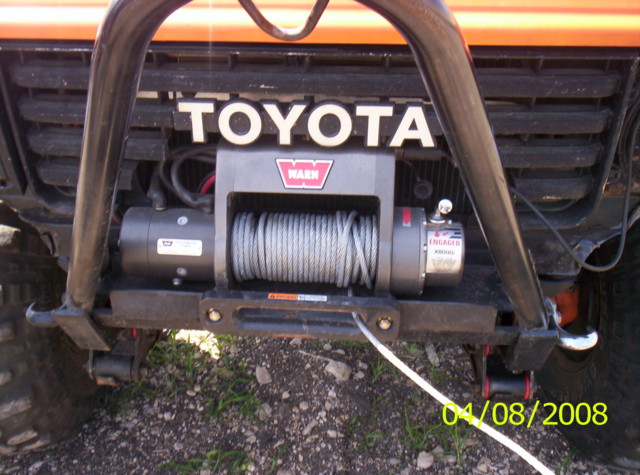 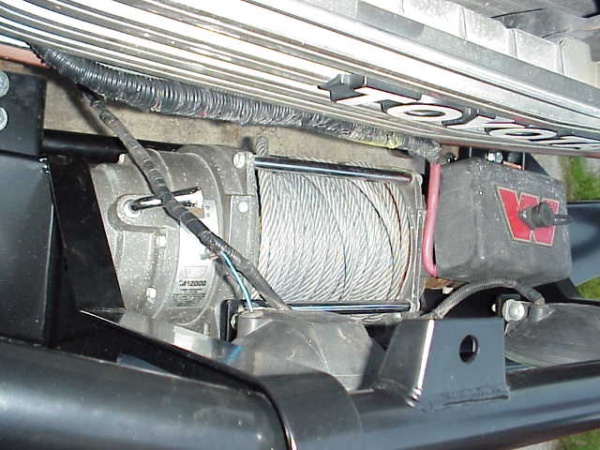 on one of the links posted above a guys is saying he mounted the XD9000i in an ARB bumper, allthough its not clear to me which model he is talking about, and it may be the old verion of the ARB bumper which may or may not be different as far as mounting the winch goes.

Kurt told me the XD9000i would not work.... he mentioned the forward mounting as opposed to the bottom mounting of the 9000i, and I see where the solonoids would be an issue too. I know if you want to do do some cutting and welding you can make things work, but if I were to do that I might as well get s 4 inch pipe, take a section ouf of the middle and weld in a heavy mounting plate and fill in...and I'm sure it would take a lot of abuse. I've see some nice rear bumpers from various mfgs....only seen one bumper I like for the front on a 60 and its the ARB.

I'm not a welder so I have to get my friend to help me out on that. It reall boils down to have spent $$ on a winch I've had for a while and only been used twice...and would certainly like to use it on the 60 when I get a bumper. It may be time to figure out what we can fab up for a front bumper, where I can use my XD9000i and not have to buy another $$$ winch.

I know the XD9000i is setup to mount from the bottom, so you need access to the bottom with 4 holes, so off hand I'm not sure how that would work with the idea of an old school pipe bumper. Guess there might be a reasonable way in which to mount a plate to the top of the pipe in such a manner that you had access to the 4 holes required to mount the winch. Maybe this is an opportunity to excel!... I'm sure most likely some other guys here have homebrewed some nice stuff I'll have to look and see what I can find...for some ideas.

it may be just time to get the bumper an buy the correct winch later on.

I didn't say I mounted it, I have tried unsuccessfully and was planning on modifying it to fit.

Not to Hijack, but what do you guys think.

If I were to cut the housing at the red line, relocate the solenoids, drill and add bolts with sleeves from side to side like the m8000, then roll the whole drum on its back and mount in the forward direction like the other pic. The drum and motor doesn't care how it's positioned right? 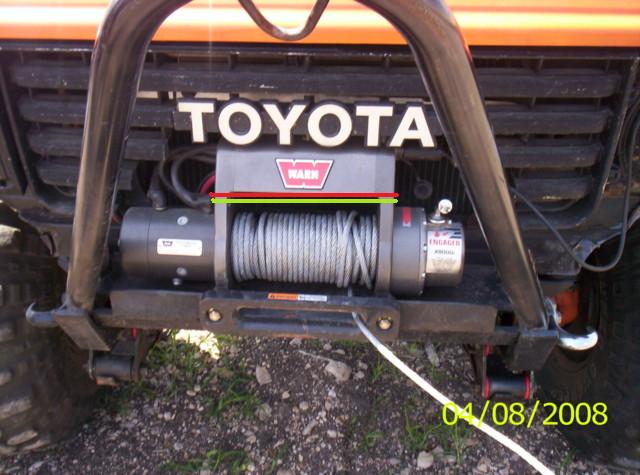 but I think a 90 * plate could be made that bolted to the ARB and the had bolt holes to mount the winch to on the bottom, you would also need braces on the side but it wouldnt be very hard. A big ass angle iron could do it but it would need to be 1/4 in by like 10 in so welded flat plaet braced would be easyer. make a mock up out card board see if it would clear and have a weldin shop fab it up

Sorry, I was going to have more than one bolt/ sleeve combo. My creative side is going way too far with this.

I know it would be way easier to sell what I've got and get the right M8000, that's why my XD9000i has been sitting in the shed for a couple of years. I saw this thread and got all excited on how to make it work again! Ahhhh, I wish I had a garage!

I think that with your situation you have a good winch with a fair amount of equity, trade it to someone who HAS a compatible winch to the ARB bumper who wants to move up a class and doesn't need to conform to the FJ60 fitment chart...i.e. a guy with a 40 or a jeep or whatever, take a small hit on the poundage to trade straight across for one that will fit. For what its worth, the M8000 is a great winch and just barely fits and anyone in their right mind that didn't need to mount feet forward would trade you

read through the links posted above...not the thread. YOu'll see where someone (not you) claims to have mounted an XD8000i in a FJ60 ARB winch bumper. 2nd or 3rd post above (from the top)has 4 or 5 links to other threads.

alpendubber said:
I didn't say I mounted it, I have tried unsuccessfully and was planning on modifying it to fit.

oh, sorry. i misread it.

Yeah that's probably what I'll do. I listed it locally for $400.00(great deal) and had a ton of interest until they found out I don't have the control, needs a new wire rope, has scratches, yada yada yada. So I ended up keeping it.

A foreman at work has new tabor 9000lb that he may want to trade. Isn't Tabor the same as Warn just lower quality?

I think a bunch of other 60 bumpers will fit most of the Warns.
I personally know 4plus does.
In your area I believe Iron pig is a builder.
There has got to be more in the south.
ARB is in Washington, 4plus is AZ, so shipping may be a deal killer for you

I was looking at the 4plus bumper on man-a-fre... too. I like the ARB over all, but if one bumper works with the winch I already own then I may have to consider it. I have too many vehciles and I'm going to sale my K1500 pickup which has the XD9000i winch mounted. I'll pirce it w/winch and w/o winch.... A similar winch today cost around $1K.

I think the 4plus bumper was $900 or so and I"m sure there will be a nice shipping charge.

Really it depends on what I can get for my truck and if the winch sells with it.... if all sales then I'll start out with new winch and bumper....it winch does not sale with the truck then....keep old winch and find bumper that works with it...ie.. most likely the 4plus.

I've not seen other FJ60 winch bumpers .... I don't think iron pig make a front 60 winch bumper. Maybe they would custom make one...but I'm not interested in paying big $$ to do that. If they were
reasonable that would be fine with me. I've just been surfing the web. I know a lot of guys here do their own stuff.

so deerishous
You must log in or register to reply here.

B
Factory PTO Winch - Does it fit both Auto & Manual?

What rear bumper is this?