Pics here, statics plus pics of a snow run we did with Bobby Long recently

Dave, did you do the extension on your rear swaybar or was it MAF?

I ask because it's begging to have QR's in the middle

Nice progress though, still want to see some pics of it in some rocks

Not trying to pick a fight but I still dont see a point in spending that much money to lift the truck and have all of that crap hanging down with the brackets at a stock height.

Any particular reason going with the MAF lift instead of Slee's?

Look at this picture. Those control arms are way to low! It's just a poor design i'm sorry. You would never find those on my rig.

Thanks, Rok! Clown, on the sway link extensions, that was Man-A-Fre. And as for rocks--for that very reason we are going up to do do the Lake Isabel Trail on Saturday the 14th. I want to see for myself how those brackets hold up to a rock run. Some pics online next Sunday (and of course full story in Mar/April issue of 4WD Toyota Owner). Should be interesting. Here's a pic of Isabel. 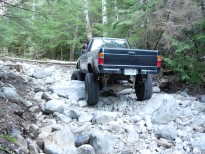 apcoleman said:
Not trying to pick a fight but I still dont see a point in spending that much money to lift the truck and have all of that crap hanging down with the brackets at a stock height.
Click to expand...


No worries, no offense taken.

Naturally, that's a good question and I get it a lot. Wrench, do you mean the brackets? The arms are in the stock position, (which may be too low in some opinions)--that's the purpose of the drop brackets, to keep the geometry the same as stock.

The basic answer, and very important to realize, is that the bracket attachment points AND the control arms are at the same place as they were before the lift! Therefore, if you were going to hit them now, you'd hit them before. That said, then the question is, well, those bracket arms are long and sloping and can be hit on rocks. This is true, and we'll test them out. I suspect they'll act as a de facto slider, but we'll see this Saturday. That's why we're going; we want to test it too!

Now, another thing to keep in mind is that for example the front control arms hang lower than the drop brackets. You'll hit the bottom of the arm before the bracket. Same for the swaybar.

Although I haven't driven in an 80 with Slee's kit, I know his products are top notch and people on Mud confirm this. I've ordered a Slee t-case skid and AC Dryer plate as well, and I love his gear!

Man-A-Fre makes an awesome setup, too. It's stable, no "death wobble", and is another cool, unique solution to going higher than 2.5 inches on an 80.

The key here is doing a real-world test: there is what the setup APPEARS to do, then there's how is DOES perform. One can look and conjecture, but there needs to be battle action. We'll know next Saturday--will report back in six days!

Yeah I definitly would never want to have drop brackets ever that low on my rig. They just look like an itching for some hang ups on the rocks. And they don't look so hot either. Just my opinion. Again not trying to pick a fight.

4WD, You can't slide a 6000+ rig across a rock.Those drop brackets will stick like glue on the rocks.

Dave, thanks for the clarifications.

You should give some serious consideration to having the rear swaybar on QR's. You've got the length to do it easily and if you've ever worked the rear suspension with it disconnected you will never leave it attached again! That's my experience, but so much so that I've completely remvoed the rear swaybar and only put it back on when doing really long road trips. Give it a try this weekend on the rocks to see for yourself.

Also, just noticed that you are still not sporting any sliders

You won't really be able to test the capibilities of those MAF brackets IMO without sliders or destroying your rockers. That's the type of test I'm anxious to see. One where you have to place a front tire on a big-a$$ rock - like 3-ft high or higher - so as you come off of it your slider (or rocker or MAF bracket) is gonna take a hit right the bottom of the front edge of the front doors. Same goes for the rear as you bring your rear tire up on it will those brackets hang up or will you be able to get the rear tire up on the rock no problema? Again, just my experience with a typical OME and then Christo's suspension setup and sliders but this is a REALLY common manuever on the rocky trails I've been on and you see the benefits of your sliders about a hundred times and you come off the trail knowing they paid for themselves several times over too.

Anyhoo, have fun and definitely take lots of pics of the action so we can continue to hyper-analyze

Great snow wheeling pics. I like the green 4runner


and if you try too hard with 37's and a turbo on yer stocker birfs guess what happens :hillbilly

apcoleman said:
Not trying to pick a fight but I still dont see a point in spending that much money to lift the truck and have all of that crap hanging down with the brackets at a stock height. ?
Click to expand...


I agree 100%! The brackets in the pic noted above are insanely low and not very well designed in my opinion! They might be strong as F, but hanging that low, they are asking to get hung up on stuff!

With a truck as heavy as the FZJ, it isnt going to "Slide" over anything! More like "Be Brutally Dragged"

Best of luck though!

Kudos to you for thinking outside the box!

Wrench said:
4WD, You can't slide a 6000+ rig across a rock.Those drop brackets will stick like glue on the rocks.
Click to expand...

Sliders: i know...believe me, they're on the list--gotta get some soon! Priority, for sure. Too risky to wheel without them.

What awesome is, with all this feedback (all perfectly valid conjectures) I seriosuly can't wait to wheel it in the rocks. Will the tale end bloodily? The clock is ticking...

OH! Damn me, forgot that we put the Longfield 80-series birfields in it. www.longfieldsuperaxles.com

4WD Toyota Owner Magazine said:
The key here is doing a real-world test: there is what the setup APPEARS to do, then there's how is DOES perform. One can look and conjecture, but there needs to be battle action. We'll know next Saturday--will report back in six days!
Dave
Click to expand...

Thanks for the clarification. I am very interested to see how it wheels.

The truck in Wrench's picture looked just like mine after Slee's 4" springs. I went and added 30mm spacers gotten from MAF to the front springs. There is still a slight nose down look to it but you could use the height with those drop brackets. Damn, those things look rediculous.

I am using one (1) of MAF drop brackets, the rear panhard bracket. That seems to be the only one worth while to me.

May it's just the pic but the breakover looks less than a regular old OME 2.5 lift.

Are those stock rear lower arms? If so the rocks are going to mangle them.

It may handle nice on the highway and forest roads, but I will bet a stock truck with the same tires and an OME heavy lift would smoke it in the rocks.

MoJ said:
May it's just the pic but the breakover looks less than a regular old OME 2.5 lift.
Click to expand...

It is, the arms are in the stock location.
You must log in or register to reply here.

B
Looking to get a FZJ80, questions on one recently looked at
2