In september I went on the 3rd annual Norcal 80's Rubicon run in my 4runner. It had a 4" Trailmaster coil lift in the rear that actually flexed really well. My guess is FirstToy took some pictures down big sluice of the rear flexed. After the next Trails is out he said he would publish his pics. I didn't know it, but one of the downsides of the Gen 2 coil lift design is that under extreme flex the panhard brackets undergo enough force that the axle mounts are sometimes torn off the axle. This indeed happened to me. In addition, the lower panhard drop brackets were rock anchors. They are plenty strong, but they hang up fairly easily. As a result, the factory frame mounted panhard brackets took a pounding and were crushed. The picture shows one after I spend considerable time trying to get it as straight as possible.

Back in the late 90's Chris Geiger basically built up the same rig. One of his observations was that when lifted, the short links on the runner tended to induce rear steering. Not fun.

So for all these reasons I've decided to do a leaf spring swap. It's my daily driver so I don't have time to endlessly play with link lengths and geometry to dial a 4 or 5 link. 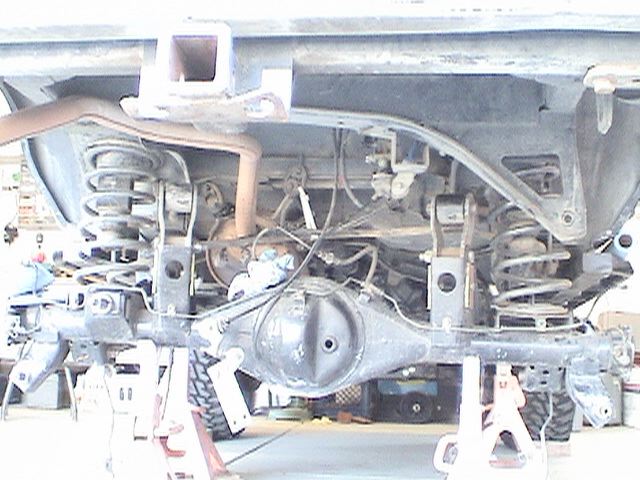