Hello
I have a 1985 BJ73 with a 3B engine. 317000 km on the teller. The PO said, the engine is a replacement and has actually less km, but there is no proof.
The engine runs great. But I note since a while now on 'cold' starts (around 17-25°C / 70F) that it takes longer for the oil pressure light to turn off, than it used to. Sometimes it's even close to the low-oil-pressure emergency shut-off to kick in. I'm using that hand- throttle screw on cold starts, so revs are already raised. Oil changes didn't show any effect. I'm using 15W40 mineral.
Once the light is off, it doesn't come on again, also not when revs are lowered once engine is slightly warm. The engine runs just fine.
Any suggestions on how to approach the issue? Thanks for help
Ralf
S

sometimes I get the red warning lights remaining on for a while after I hose things and connections get wet. When it dries from warming up, they red lights stay off, hope that is all it is for you.

A few folks post probs with oil pressure gauge, they get old.

I am happy to have the aftermarket gauges for oil and temp too, as back up for the original gauges, unlikely for all the gauges too pack up at the same time.

sodafeld1 said:
When it dries from warming up, they red lights stay off, hope that is all it is for you.
Click to expand...

Rather no. The truck parks dry in a garage. The issue even persisted at the hot summer days we had.
I wonder whether the sensor may age, though.
Cheers Ralf

One of the first mod that I did on my diesel engines is adding mechanical gauges for oil pressur and collant temperature. Much more accurate and real time info.
--- Si je dois aller en enfer...

Felde said:
Any suggestions on how to approach the issue? Thanks for help
Click to expand...

The only way is to do the oil pressure test outlined in the manual. Using the hand throttle to raise the engine rpm is normal on a cold start in cool climates. Even when warm, they are better off at 600-700 rpms.
Shoot straight ya bastards and dont make a bloody mess of it.
Breaker Morant at his execution

roscoFJ73 said:
The only way is to do the oil pressure test outlined in the manual.
Click to expand...

Yes. I need to find a gauge that fits.

Am I actually right on this?:
The 3B apparently has two oilpressure switches (one for the dash light and one for the EDIC emergency shutoff)?
All parts diagrams only show one (probably because being identical) but the wiring diagram shows two and I also see what I believe are two (right engine side: one next to the oil filter bracket and another one more to the front. Mine look similar but not identical)

A coupe of hints from myself :

Here the oil grade recommandation from the 3B FSM :

Then, the minimum working oil pressur is very low on idle. So you need to run quite low pressur to have engine shut off. It's sometime happen to my after an oil change within the first 5 sec... if that happen, it is only once every oil change.

This one is a sensor and look like a «bell» and it is situated on the «front side the engine» RHS. That sensor talk to the gauge : 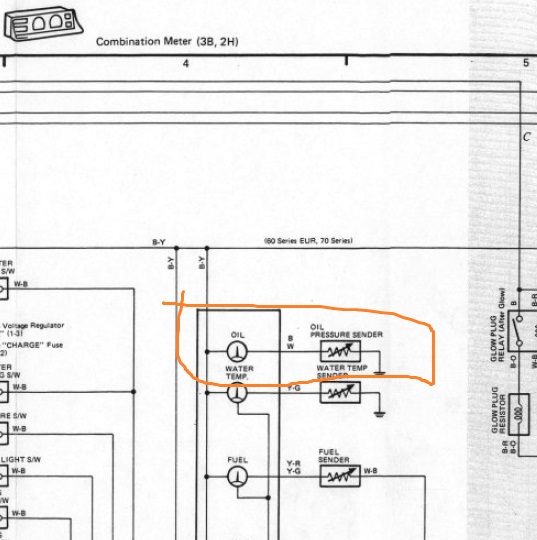 This one is the swith. It tell to the EDIC when to stop when there is no oil pressur. It act like GO - NO GO. When it's «grounded» (no pressur), it cut the EDIC. It 's situated on the «back side» of the engige (RHS) 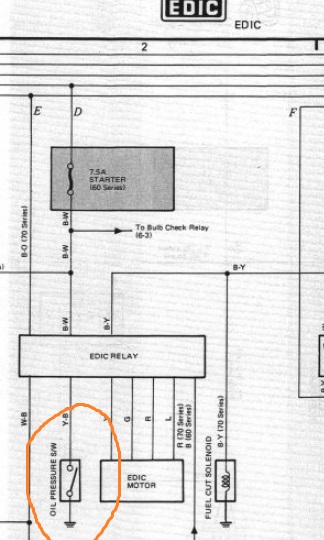 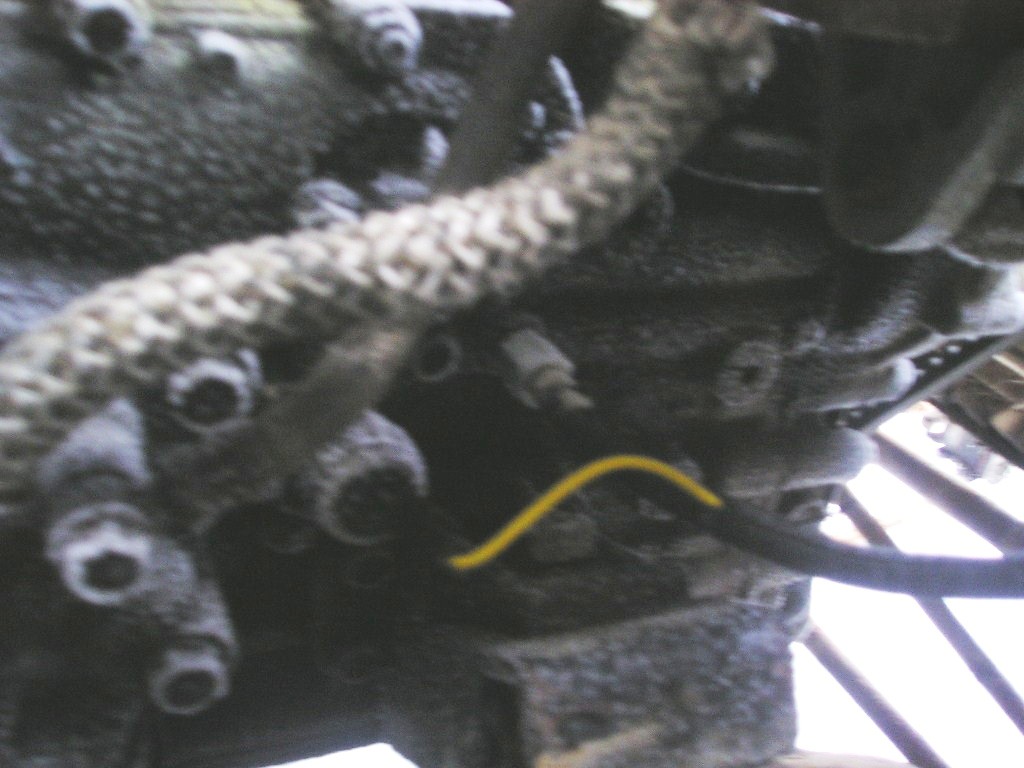 David*BJ70 said:
This is the oil switch on Europe market 1985 BJ73 (although the image does not position it on the right side engine)

Yes. This all exactly matches my research, opinion and current practice.
Thank you for gathering all the snapshots, I appreciate it.
So we agree: There are two oil pressure switches (dash light and EDIC).
I experience the dash light to stay on long and the EDIC cutoff to kick in occasionally. As this happens in perfect sync and within given spec ( for the EDIC emergency cutoff), I believe the switches are OK. If not, they would show contradictional behavior, which is not the case. Two devices to become faulty ar the same time is unlikely.
So, by symptoms, my startup oil pressure may really be low.
- Proof needed. I need to find a gauge and do a measurement.
Thanks Ralf
Last edited: Sep 26, 2022

On idle, lub oil pressure is low, there is a check valve for oil piston jet which need more than 5psi to open.

There is a relief v/v on the lub oil pump, should start open around 80 psi?

3B with 3 cam shaft bearing seem to be more prone to #1 bearing wear/ failure.
(May find some bearing material in oil pan as a clue)

But I think you change the oil recently with no affects.

I have a low oil pressure on the factory gauge but no light/ edic. To verify it, I installed an air pressure gauge (0-200 psi) with an adapter (npt to 1/8 BSP) on the oil gallery (front plug so I can see it while engine is idling around 500 rpm) 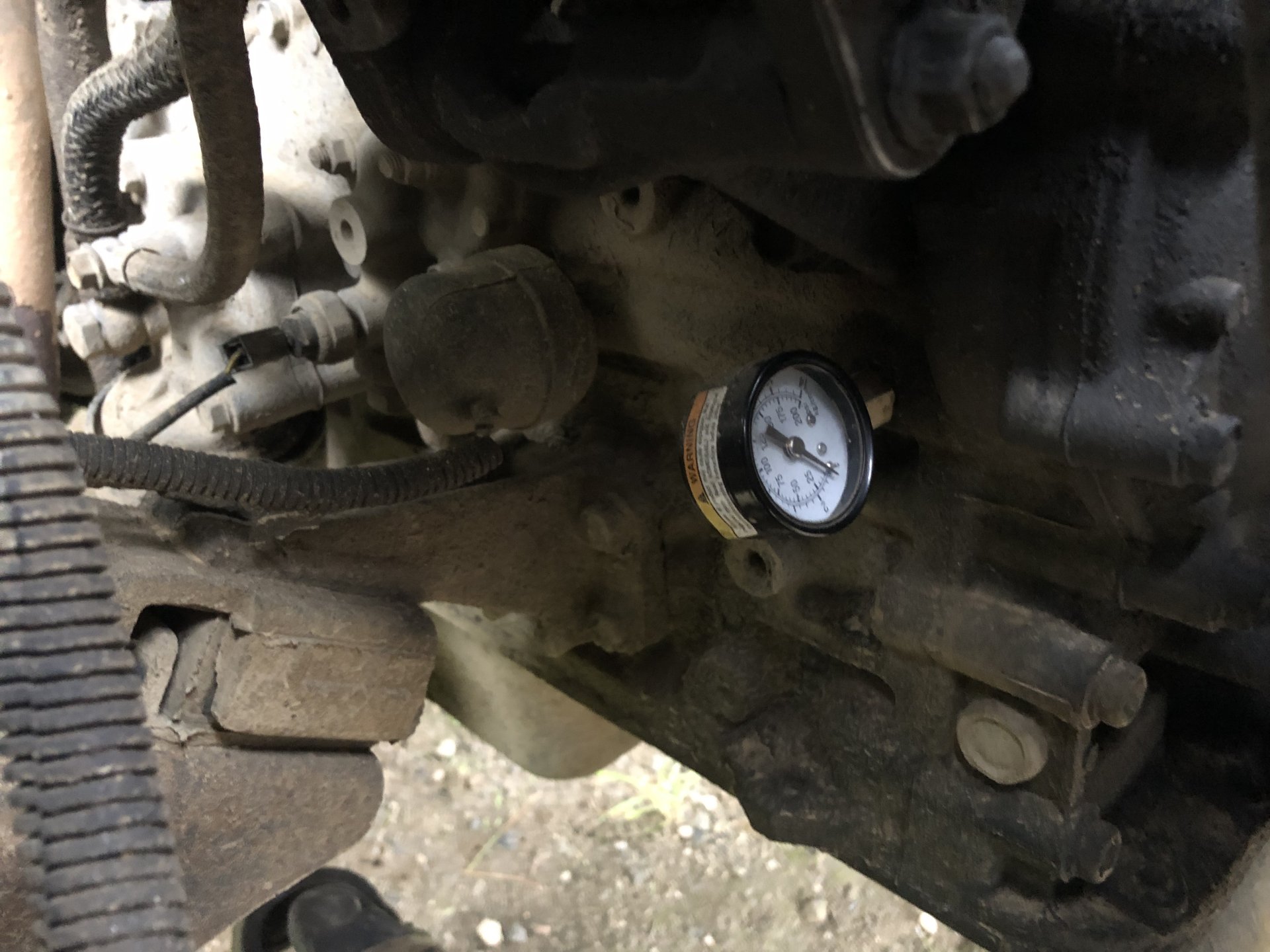 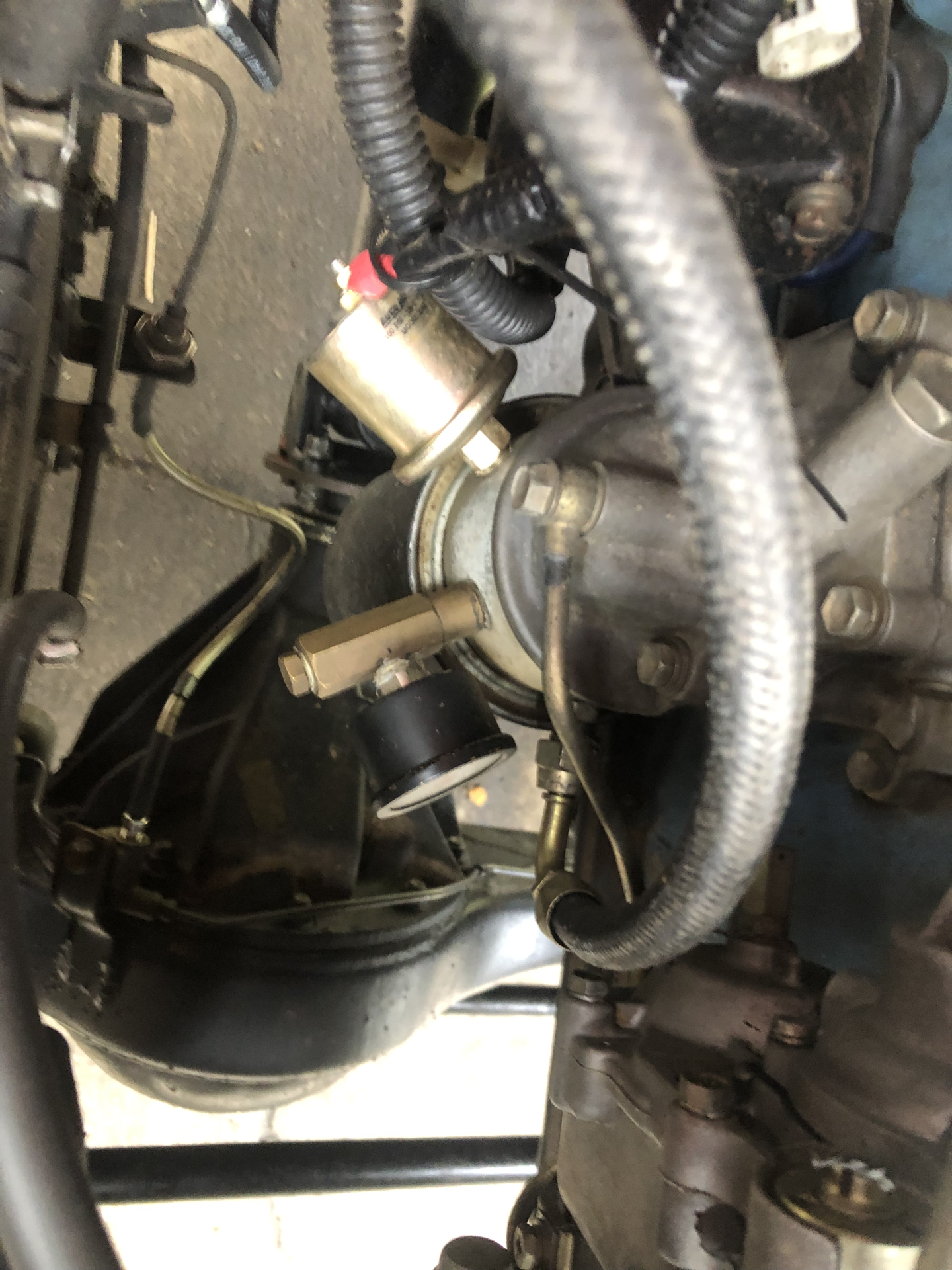 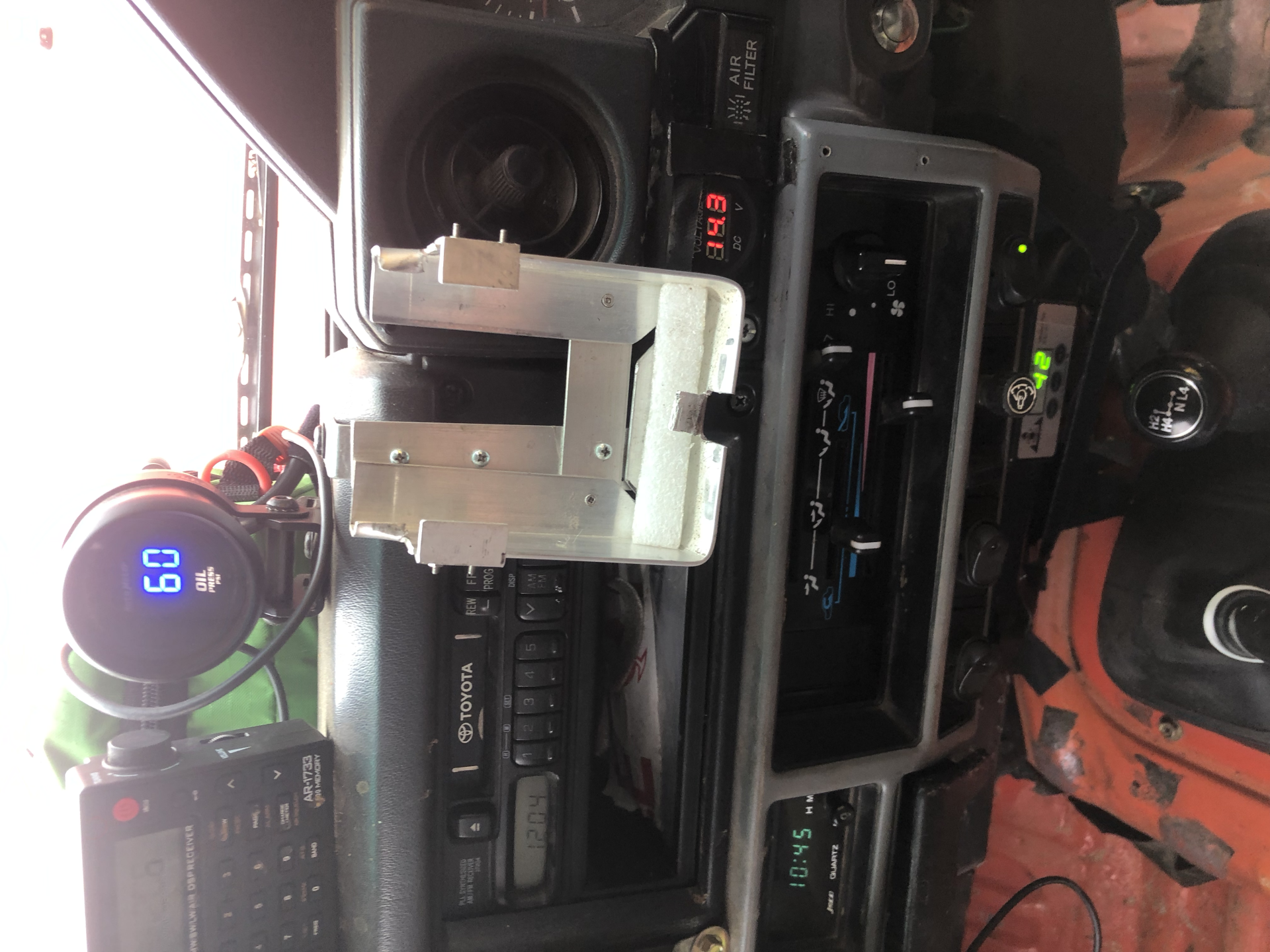 Thank you all for your input.
I did a bit of research and measurement. Here are my findings:

Parts and part numbers:
In the early BJ73 (like mine) there was no measuring gauge but only a check-light for oil pressure in the dash. Hence there are actually two switches. The bell-shaped sensor came in only later.
Although both switches (EDIC and dash check-light) should technically work the same (open / disconnect ground at min spec oil pressure of 0.3 bar), the switches are different concerning their connectors:
- The EDIC switch has a flat connector
- The dashlight switch has a round connector (shaped like the head of a nail) where the connector is slipped on from the side.

The original partnumbers are superseded; parts from later models are used.
- Dashlight (Sensor) switch: 8353060030
- EDIC switch : 8353014030
Here is the interesting part:
The 3B at idle has a really low spec oil pressure of 0.3 bar. All later engines have higher pressures at idle.
Toyota doesn't give exact spec for their parts, but some manufacturers (including some OEM suppliers) do. On the superseding new parts I found anything from 0.3 to 0.5 bar specified. Note: There are some switches that open only above the 3B spec!

I measured mine. (Low, moving pressures like this are really hard to measure, in particular as we are looking at pressure over time here (concerning the EDIC shutoff).)
Well, apparently my engine is just within spec.

What do I now consider to be the culprit?
Well, I think it's a combination of effects:
When I thought about what I had done during the last year, which may have affected the matter, I recalled:
- I lowered the setting for revs at idle.
They were quite high when I got the truck.
But I noted already: I went a tad too low.
I also noted that also the screwing knob to raise revs for start was affected: The first turns had no effect any more, hence I have to screw quite more to have the same effect as before. I didn't consider this at first to be relevant, as I do rev-up for start, BUT --> Apparently I don't do rev up as much as I did before! I suspect, I start at lower revs than before.
- My truck starts really *! good, so the slightly lower revs have no effect on starting. I also never apply throttle on start. But the little less revs right from firering do increase time for the oil pressure to build up! Sometimes too much time.
This,
plus 'thick 40 oil',
plus a 'new' style switch (the PO put it in when he refurbished the truck), which probably rather opens at the high side of spec (0.4ish bar) while my engine sits rather at the low side (0.3),
caused the issue, I believe.

Could I fix it?
I hope so:
- I did a more thoroughly setup of my idle screw setting: I set it just a bit higher again and
- I made sure the rev-up screw knob has almost immediate effect again.
- On start I use it thoroughly now and make sure the engine revs sufficiently high right from first firering.
And it works (by now)

Thanks again for all your input.
Such old cars have their own habits and so have their owners.
At least, we have a good writeup of parts for others to refer to here (Thanks @David*BJ70 ) and some pics on the situation and how to do a measurement (Thanks @lacalvette )

Thread closed from my end.
Cheers Ralf
You must log in or register to reply here.

3b burning oil now what ?