Hello
I would like to introduce myself and tell all of you about my quest to buIld an FJ40. The following cast of character have help me imensly along the way. First being my dad, when I started driving back in 83 he wouldnt let me have a muscle car like the rest of my friends so i settled for a 1981 Toyota 4wd, bone stock when we bought it ut that quicly went away as the the 44s an big block were shoved under an in it. I spent many a days wheelin around the hills of south central pa. lots of great times and friends. As I got older familes jobs ect took away from the truck and time I spent in the hills.
Fast forward to 2007. I took a job in Twin Falls Idaho. The people that I would be working for are avid offroaders mostly differant models of jeeps. I hate Jeeps..they are simalar to hemeroids, everyone has had one or is gonna get one. That brings us to the number one driving force behind me building the FJ40. Ed Goff. I met him through the new job, he has a small shop behing his house so i went over to share a coold beverage with him after work one evening. ads he opend the doors....there it sat, a very well built 85 toyota 4runner. The truck belonged to his dad and they spent countless days trailriding around the west coast.
Eds experince with the Toyoats has proved to be the best thing for this project I cant thank him enough for all the hard work he has put forth to get this project going and seeing it through.
After taking a few offroad trips in Idaho with Ed and other friends I decided to pull the trigger on a 1972 FJ40. I always wanted one an knew it was now or never. The truck was in decent overall condition older build stock 6 with 3 speed.
I knew i was in trouble when we got it back to the shop an Ed was like...this can go..that can go..dont needs this change that..No bigge i can run it for the summer and do everything over the winter......hahahhahahah..wrong...i made a toatl of 2 trips before the engine blew that was 11 months ago an brings us to the begginning of the FJ build off
Below is a pic of the truck as i bought it 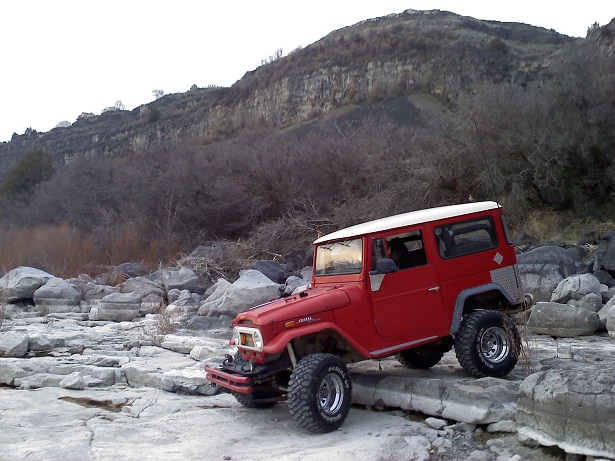 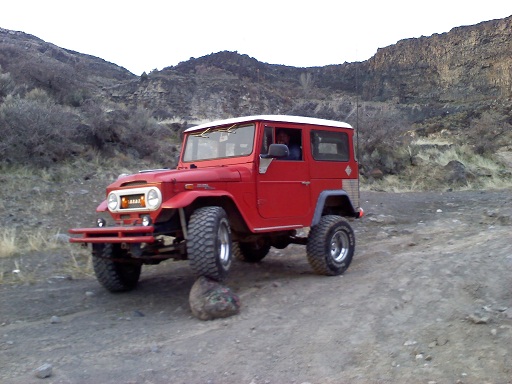 One of the First things was to build a spare tire carrier. So Ed fabricated this one along with the rear bumper, Niether of us knew what lay ahead.....but we had big plans...this was may of last year.

Good looking rig Aaron17. You're not too far from me. Idaho sure has a lot to offer when it comes to offroading that is for sure. Although, my 44 won't see anything more than fire access roads.

BJ44V said:
Good looking rig Aaron17. You're not too far from me. Idaho sure has a lot to offer when it comes to offroading that is for sure. Although, my 44 won't see anything more than fire access roads.
Click to expand...

Grrrrr i have a years worth of pics to post....an it wont let me, only thing left of the truck in the pic is the hood an roof

Aaron17 said:
Grrrrr i have a years worth of pics to post....an it wont let me, only thing left of the truck in the pic is the hood an roof

Gotta buy a star I believe! Lookin' forward to seeing your junk!

I have a pile of stuff we didnt use, prolly be free to a good home or trade for a 12 pk of bud light
D

Nice looking rig, you can post pics to Flickr.com, picassa etc and then share the link, that is if you dont want to buy the star, looking forward to the pictures.

DonPancho said:
Nice looking rig, you can post pics to Flickr.com, picassa etc and then share the link, that is if you dont want to buy the star, looking forward to the pictures.
Click to expand...

Thanks, all hooked up an happy to support the forum.

Back to the build off. At the time neither ed nor i seen any issues with the truck that would stop us from using it for the summer so Ed fabricated this nice tire carrier. 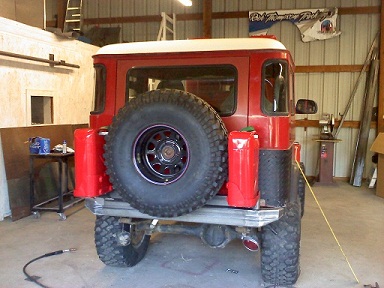 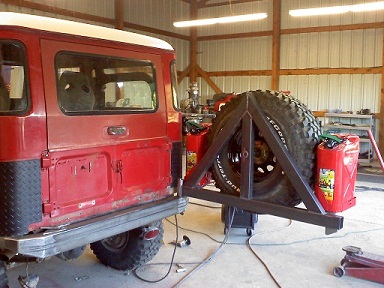 An I added a set of 35s then we were off on our first trip. np power brakes, worst steering ever...an the stiffest suspension known to man. what lied ahead was becoming very clear. an this is Eds rig that he also built. Great truck an he knows how to drive it. 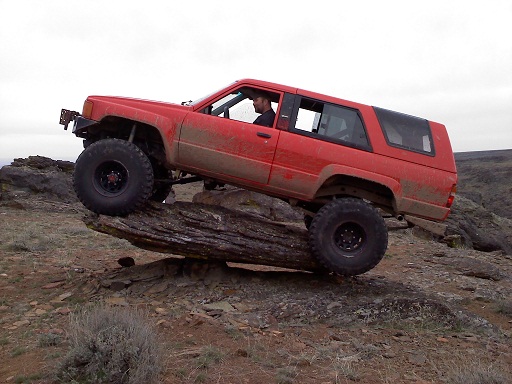 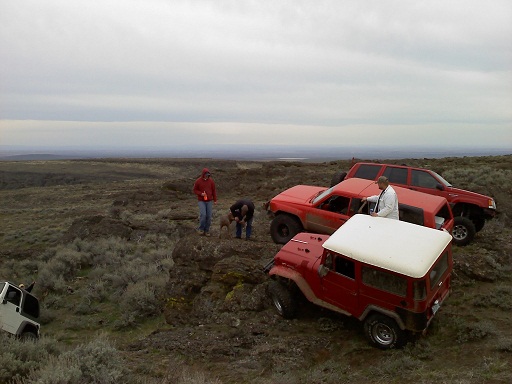 So...now i am thinking....this will be ok...lets strap down the coolers....take anothe weekend trip...Diaster lurking
at the end of the day....I found out the hard way that Toyota 2f engines do not like going down steep inclines for extended periods of time 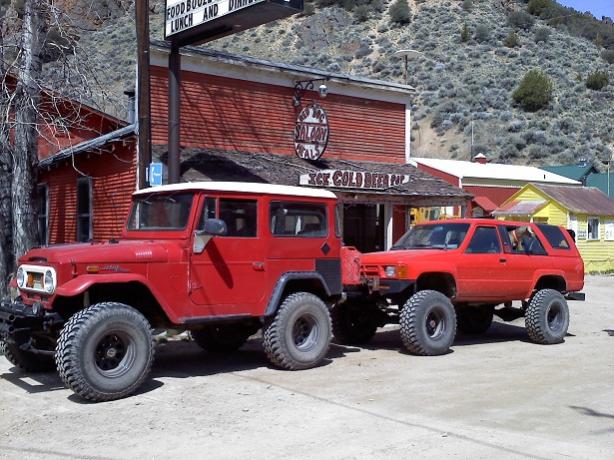 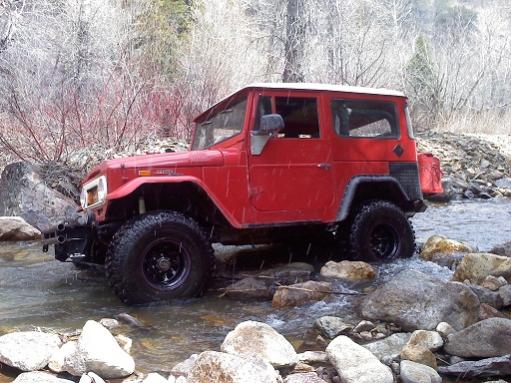 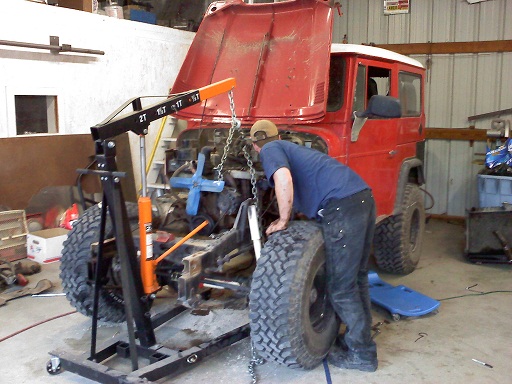 Nice rig you have there. Lokks like great wheeling country too!

An so we started early. Ed allready knew what needed to be done....the list was long. but we tackeld it step at a time. Ed di the Suspension and My friend Quinn and i got on the the engine dept. Since the steering an brakes were crap we decided to go with saginaw conversion. all the existing suspension mounts were cut from the frame. We went with Alcan springs, RUFF STUFF brackettry, ed stretched the wheel base 4 inches and also installed late model knuckels an disks on the front to match the GM disk conversion on the rear. The rear fram was also boxed 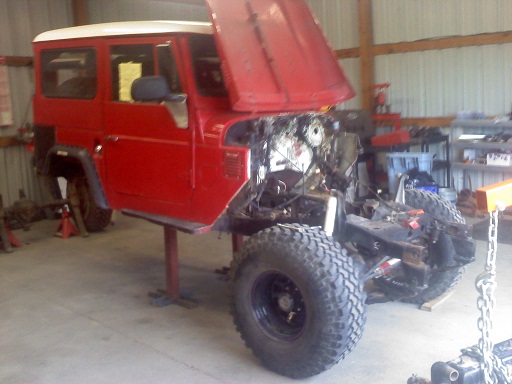 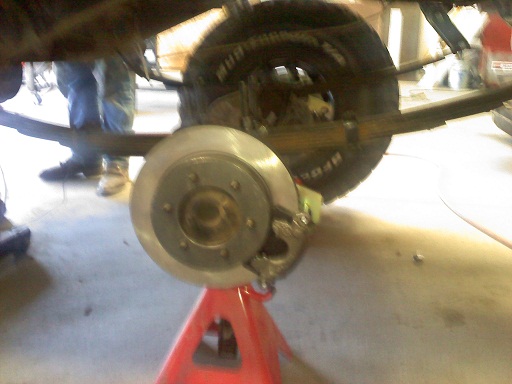 For the engine, I decide to call Advance adapters. Orderd there complet kit to install 350 with SM465 trans with twin stick conversion, centerforce clutch. I gotta say those guy supplied us with some really nice stuff. 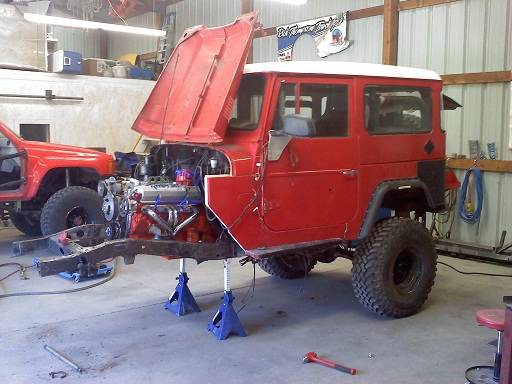 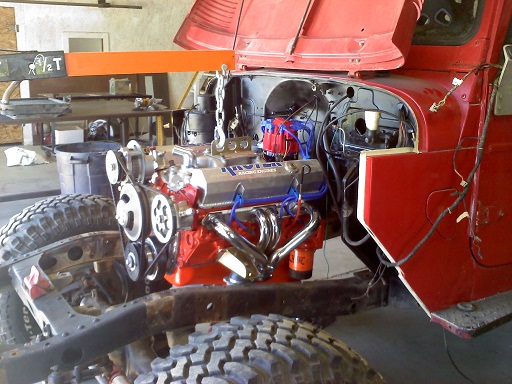 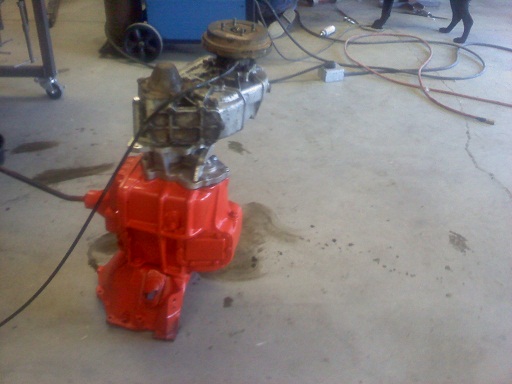 Keep the pics coming. That is one nice looking fj40. Love the stance on it.

So now we have 4 wheel disc brakes, all new steering with all Marlin Crawler componets, New engine new tranny..will somebody tell me why in the hell i bought a running truck to start with..

Truck is almost complete. We have a few brake lines to run, drive shafts to get made an off for the first test run. I have read alot on this forum in the last year an learned quite a bit. My friends Ed, Quinn an Willie have put a great deal of time an effort into making this a solid trail rig. with out Eds help an the threads on this fourum my FJ would be sitting in the corner rotting away.
If anybody would like some more detailed pics i would be happy to post them or answer any questions about what we have done,
Still amazes me what a 12 pack of beer an a checkbook can accomplish 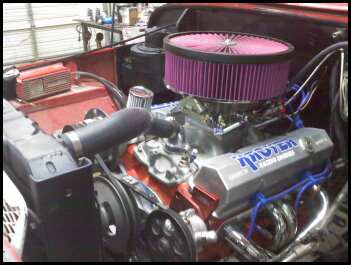 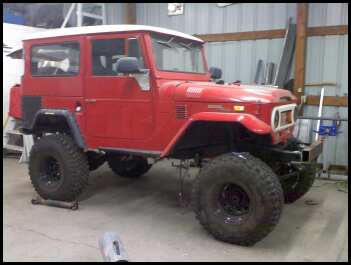 NICE 40!
You must log in or register to reply here.