During the refurbishment of a '77 2F vacuum advance distributor I wasn't able to get the breaker plate to rotate smoothly, no matter how much I cleaned and lubricated it, so I was almost ready to give up on the distributor. I decided to disassemble and clean the breaker plate assembly to inspect the parts. It's pretty easy once you learn the trick to remove the four small spring steel clips. There is a two-piece race that holds 50 small ball bearings. The two race halves are held together with the four small spring steel clips. The rotating breaker plate rides inside the race on the ball bearings, it has a U-shaped groove around the outside perimeter that captures the ball bearings. I noticed a lot of galling on the inner surfaces of both race halves - circular depressions from the ball bearings all around the inside perimeter. The ball bearings hang up in the depressions as the plate rotates, which is the cause of the binding. However, the U-shaped groove on the rotating part of the breaker plate was still smooth.

New breaker plate assemblies for the 1/75 through 9/77 distributors are still available from Toyota, but the retail price is $79.53. I decided to look into new parts from other NipponDenso non-Land Cruiser distributors. After comparing dimensions I removed a breaker plate from one of the new Toyota parts distributors in my stash and disassembled it. After disassembly I cleaned the factory applied grease from the parts. The rotating part of the 2F breaker plate fit right in the two-piece race - it turns out the race and ball bearings are common to both distributors (a common Toyota practice). Then I reassembled the breaker plate assembly using fresh distributor grease in the U-shaped groove to hold the new ball bearings in place while I sandwiched the rotating part of the plate in between the two race halves. Then I installed the four new spring steel clips to hold the assembly together, and checked it out. The 2F breaker plate rotated as smooth as silk, so I installed it in the refurbished distributor.

It's really easy to remove the old breaker plate assembly from your distributor, disassemble it, swap out parts, reassemble, and reinstall in your distributor. Once your distributor is out, you should be able to finish the job in less than an hour. While you've got the breaker plate out, it would be a good time to replace the mechanical advance stop pin bushing if needed.

I have more than 20 breaker plate repair kits, and will be posting them in the For Sale forum. The kits include the two race halves, the 50 ball bearings, the four clips, and new hardware to secure the breaker plate assembly to the distributor housing. 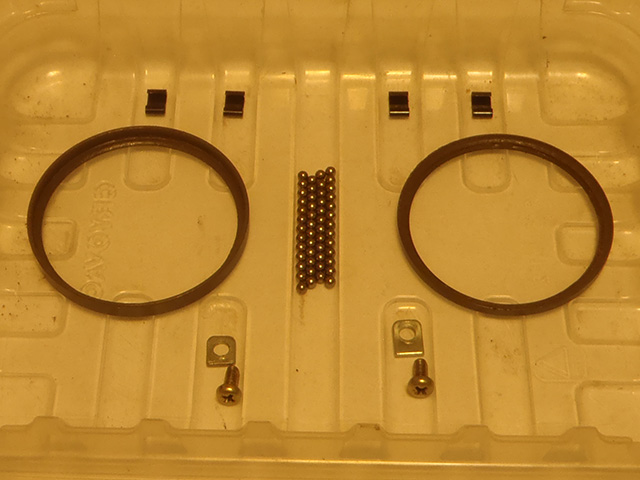 That is a very nice kit! Unfortunately distributors of that age usually have bushings/shafts that are very worn making setting correct dwell next to impossible. I can't find anyone to rebuild(?) that part of my worn distributor. If I could find someone I would be in the market for your kit.

thorslc1977 said:
That is a very nice kit! Unfortunately distributors of that age usually have bushings/shafts that are very worn making setting correct dwell next to impossible. I can't find anyone to rebuild(?) that part of my worn distributor. If I could find someone I would be in the market for your kit.
Click to expand...

I've found that the F engine distributors are more prone to that, working on a solution for those right now.
Last edited: Jun 10, 2020
T

Yes, where the bearings could be replaced this would make an excellent repair/refurbishment!
You must log in or register to reply here.