Visit site
Searched a bit, but most threads are of a 2018 or older vintage...and it doesn't look like Wagner does the regulators for the '76 variety anymore either.

Any other good candidates for a solid state regulator? I don't mind pigtail work, I've got a spare that I can use there...

EDIT - cheap enough and should have it on hand, going to give this guy a go (VR114). Bolt pattern looks close, too...just needs wiring tweaks.

Still chasing a wonky volts issue though...need to dig more. I'm assuming it's some sort of grounding issue, but only did some quick digging. It starts out ok, but ramps up pretty quickly to 15v even with a charged battery, so something wonky.

Alternator was good when it was taken off during the rest of the work...so unlikely there, but possible. 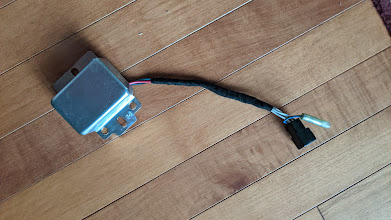 Visit site
More digging while the hood/aprons are still off...checked all the wiring, measured out at 0 ohms/connectivity, so seemed all good there. Cleaned all the contacts, tested...no real change.

Tried running a direct (heavy) ground to the alternator just to rule that out...no change.

Made a stub harness to eliminate most everything in the circuit...still the same. Somewhat better at idle, although it's sitting at 3/4 scale there although in the correct area of 13.8-14v. Off idle, the meter pegs/thrashes, and the volts creep over 15. With the Sniper/Hyperspark, that's no bueno.

Very similar to other threads, but no real conclusion other that possibly the alternator itself at this point. Any thoughts from the masses?

Since I cleaned up my frame ground my lights don't dim, but the ammeter acts differently. It use to sit around the middle mark and dip when I turned on the heater (momentaraly) or dip when I came to a stop and the lights dimmed. Now, when I am idling it dances between the middle mark and... 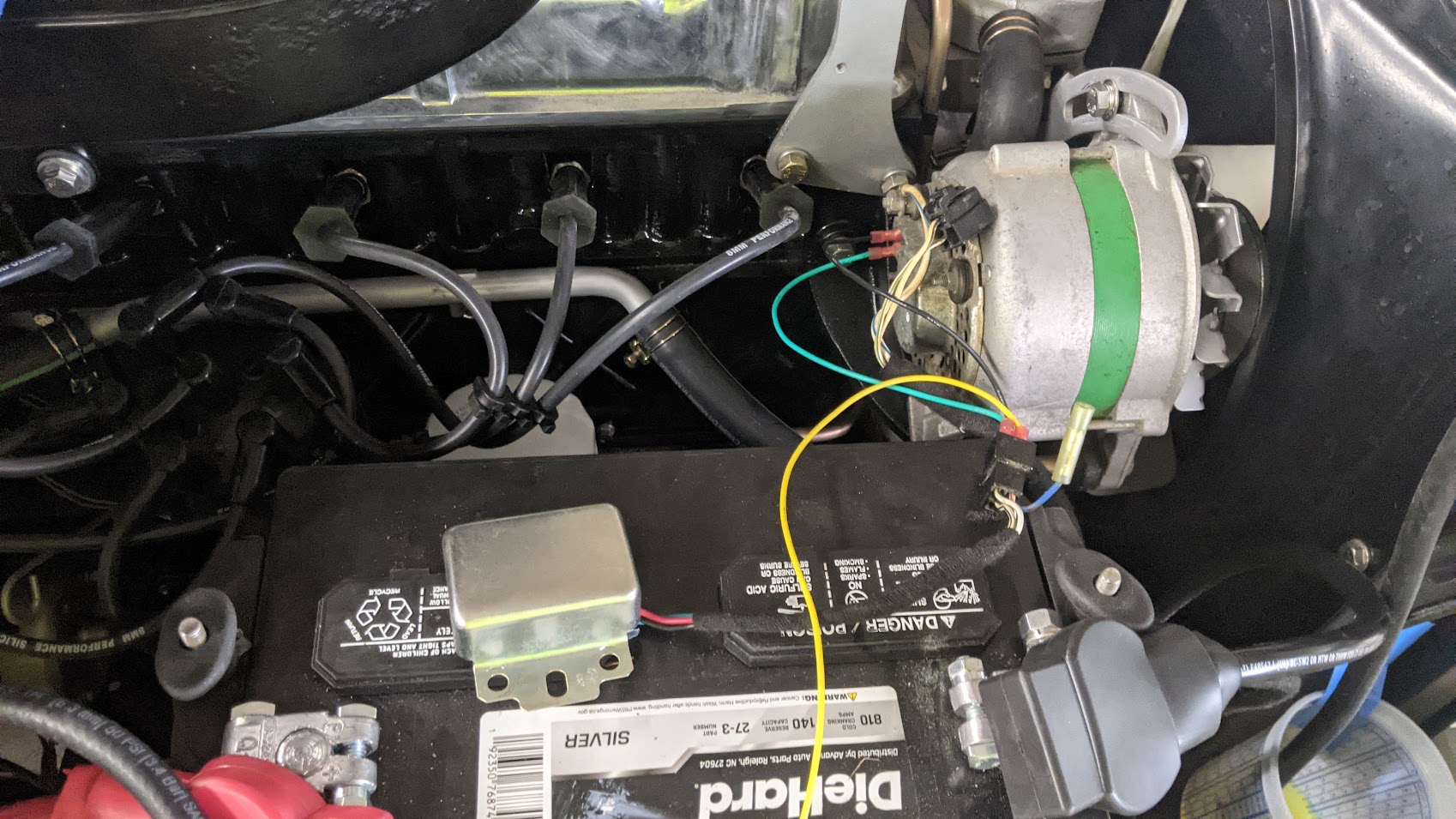 What does the battery read with the engine off? Key off AND key on? I’d be wondering about a short in the system, possibly in a circuit that is only live with the key on.
Z

Visit site
Battery is new (as in a couple weeks old), generally sitting at 12.6-12.8 overnight. Pretty similar key off to key on. Engine-running-sans-alternator will get it to drop a bit to 12.4 or so, but the CDI box and fuel pump are humming away at that point.

Everything was blown apart for the resto' over the last year, so hard to pinpoint anything changing...but two different replacement regulators do the same behavior, and I've bypassed the wiring circuits for the regulator as well.

Visit site
15v is a bit high, not drastically high but still not typical. Have you tried another meter? I don't think a bad diode would cause this, so probably not alternator related. What's the voltage read with the headlights on revving over 1000 rpm? If the battery is getting hot after 15 mins or more it would be a worry.
Z

Visit site
Headlights are out/not in yet, so no test there... heater fan is about it for load currently, but didn't change much off idle.

I'm less worried about the battery, more worried about the electrics in the Sniper/Hyperspark. The hall effect borked once, and I suspect it may have been from a voltage spike. 15v+ is getting out of band for stuff like that.
Z

Visit site
Oh, and the Fluke matched the digital volts readout on the Holley, so should be correct...and I didn't find any difference at the regulator 12v+ feed.

Luckily, they're a pretty simple/limited circuit, but it is odd...
P

Visit site
msd 8830 noise filter is supposed to deal with spikes. Could be added protection for the sensitive stuff.

Visit site
I'm curious myself... Didn't troubleshoot today, but when I ran it once, ammeter was all over and volts climbed past 15 at idle.

Visit site
Hmm could still be the alternator, if the amp meter is jumping around. I would want to try another one to be sure.
Z

Visit site
That's the plan...for the price, doesn't hurt. Should be dropped of tomorrow by the ever friendly UPS driver.

Visit site
In that photo above, I'm thinking, doesn't the voltage regulator need to ground on the chassis?
Z

Visit site
On the old/mechanical regulators, the white/black from the alternator is a shared ground, and then it's also bonded to the cover/chassis ground to provide some redundancy. The regulator in the photo above is the solid state flavor, which is all potted under the hood, and the guts don't touch the chassis...it only gets its ground via the white/black ground coming from the alternator.

Photo below is the mech' regulator...I don't have a photo of the SS one, but it's just a pile of black rubbery stuff. 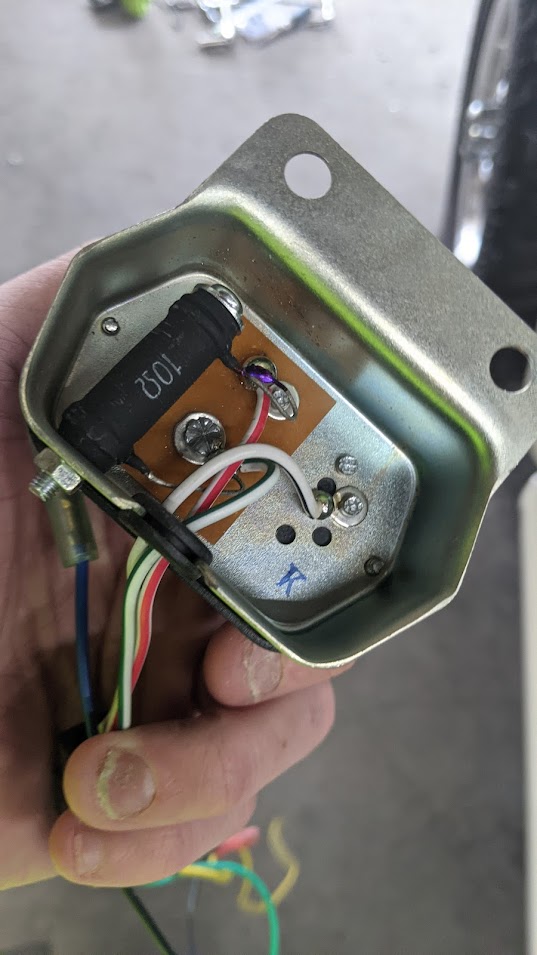 Visit site
Minimal time to troubleshoot today. UPS truck whizzed past around 3pm but no package...showed up about 7pm in a loaner truck as I was closing up for dinner, guessing he had a rough day.

Did dunk on the new alternator after dinner, but still same behavior. Not too worried about the part swap, as a new/known alternator isn't a bad thing, nor is having a spare on the shelf. Still jumpy with full deflection, and still slowly climbs up to 15+ volts on idle.

I've swapped regulators, swapped alternators, and bypassed the factory harness without much change. My next suspicion is some sort of interference from the Hyperspark CDI, as that is new to the rig since teardown. At one point, I did also pull the Holley switched line off the harness and went direct to the battery with that as well, but no change in that case either. I did order up their stiffening/filtering cap, as there's even a good place on the fender for it, but won't be here for a few days. I might try pulling the Holley off the main battery and running it from a secondary to isolate it as well if I can't get any other leads digging around.

zerotreedelta said:
Did dunk on the new alternator after dinner, but still same behavior.
Click to expand...

Hmm that sucks. Might have to go back to mechanical reg.
Z

Visit site
The mech' does the exact same thing...at the time, I'd figured it was faulty, but apparently not. I may try putting it back in and twiddling the tab to see if that at least helps bring the volts down a bit for now.
P

zerotreedelta said:
The mech' does the exact same thing.
Click to expand...

oh I see. There are voltage stabalizers for cars. You can use them to run sensitive stuff off a separate circuit. They supply a regulated 12v .
Your filter might be all you need hopefully.
Z

Visit site
The big ol' MSD cap showed up today...took a bit of fiddling, but found it a home on the fender and wired it in. Definitely better...it'll still peg the ammeter at times if you have some RPMs after start, but the volts stay much more in check. And that's both for the Holley (after the cap) and at the battery terminals. I did get a few chirps of 15v at the battery with some RPMs and adding/removing load, but it's at least significantly better.

The SS regulator (VR114) seems to behave just like the mechanical (VR470), so that's at least promising for those looking for a SS replacement.

I am going to try a different adjustable regulator later this week that I have from other avenues just to see if I can rein it in that last bit...but it's at least driveable now.
You must log in or register to reply here.