If you’ve seen any of our previous rigs we have built and sold on MUD (80, 200, 40, etc) then you know you’re in for a very long and detailed story of the build. Cliff’s Notes Version: Low mile 100 built right, the way we wanted, with a focus on reliable daily driving to send Mitch off to college in as well as setup to perform at the top of the food chain off-road. We are selling her as a turn-key Overlander with the Roof Top Tent and Refrigerator. Everything works as it should and ready for your next adventure. If you’re intrigued, saddle up and read thru the rest of the ad to get the complete story as I’m sure I’ve provided way more details than you’ll need to make a purchasing decision. I’ve only attached 5 photos on this listing but have included a link to a dropbox folder containing 95 detailed pics of how she looks all shined up and some in her natural environment…fresh back from 9 day trip to Moab 5/10/19-5/19/19…pics in the hangar were shot after we got back and cleaned her up. I will ship at no charge anywhere in the US or to a US port if exporting. I have a friend in the biz that handles this for me without charging but you are welcome to fly into KC and driver her home if you prefer.

Some of you know Mitch’s 100 or his last 80 and some don’t so I figured I'd try to capture all the details of this beauty. Before I get into that, the first question on most folks' mind is why are we selling it? Mitch and I built him one of the nicest locked 80’s that he drove for several years in high school then when it was time to send him off to college we decided a 100 would be better suited plus we had really gotten into overlanding and the Hundy is a no-brainer for that mission. I had owned four of them prior so the decision was pretty easy to sell to him. Fast forward to this past Xmas break and he begrudgingly admitted to me that he really wanted to experience life with his butt closer to the asphalt in something super-fast. We tracked down an F32 435i xDrive for him which has now been hot-rod’d to his liking. Who knows how long that will last but the 100 is simply too nice for me to store in the hangar for a couple of adventures a year. We did decided to hold onto her until just now as we had a Moab trip planned with our local TLCA club, Tornado Alley Cruisers and weren’t prepared to forgo that experience.

Moab was fantastic and the rig performed flawlessly. We had almost all the food groups represented on the trip, 200, 100, 80, 40 and a Taco (10 rigs from our club). We started out with a three day Overlanding trip down the Kokopelli Trail, dropped in at Loma, CO, followed by a trip up to The Top of the World then back to explore all the typical Moab trails, Hell’s Revenge, Fins & Things, Poison Spider, etc, etc. I do have to admit we did not do the Hell’s Gate, the Rim or Golden Spike simply based on potential body damage reports and we had no interest in tearing up the Hundy, just exploiting its capabilities. Absolutely amazed at what this beast was able to do…in comfort. Happy to report that nothing but the windshield was sacrificed (being replaced but pics still show it cracked) on the trip and that was due to a rock on the highway in-route.

Now onto the acquisition, build, etc. I always start our builds with an exceptional unmolested rig and I’m “that guy” who prefers the Lexus variant with the AHC. This was my sixth AHC equipped cruiser including the LX570 I built for myself and sold last year, fantastic system and has never been a hassle or problem on any of them. I love reading all the hate speech on Mud from folks that either have little direct experience or bought a rig that had been abused or neglected then complain about the system. When taken care of properly, it is absolutely fantastic and provides a way more comfortable wheeling experience and can be moderately lifted and still have the ability to raise even higher when needed by a touch of the button. Plus its load leveling so if you pull a trailer it keeps its tail properly at altitude. I’ll gladly pay up on the front to save the headaches of a worn out problem child. We knew we wanted a 2003+ so I started the search which took about six months to find the right one. One of my customers tipped me off to a one-owner 99K mile 2003 LX470 that one of his board members was trading in towards a new Escalade. I called the Cadillac dealer, they sent pics the day it showed up and it indeed was gorgeous. We flew up and took a look in person and it was even nicer face to face. We bought it on the spot then had it shipped down to KC where we began the build. CarFax is clean, no accidents, nothing funny but it did show two owners…originally bought thru his company then transferred to personal after they depreciated it off their books.

Here's a quick snapshot of its basic specs as purchased:
-2003 LX470 purchased 9/8/17 w/ 99,096 miles
-Owned by wife of prominent executive and maintained to the highest standard by Lexus Dealer (documented)
-Galactic Gray Mica Exterior w/ Gray Leather Interior - Beautiful Condition – No Prior Paint Work-All Original panels
-Owner's Manuals, Books, etc.
-Two Remote Keys and One Valet Key
-We felt like we hit the lottery when we stumbled upon it...we traveled to inspect two prior to this that were all disappointments. I’ve been on the wrong side of a rusty 100, never again. I took pics under the tailgate flap where they all seem to rust and also note the lack of rusty bolt heads under the engine compartment.

Build Details (I drove it around for 2K miles prior to tearing into it to ensure we knew exactly what we were dealing with before starting the build. I'm sure I've missed some items but this should be close to everything...

If you're still with me and not bored to tears then you've probably figured out that we don't do anything half-way. You will not find anything installed or modified that does not appear to have been installed that way from the factory. No dangling wires, rough cutting or "good enough" techniques applied. Keep in mind, this was built to be Mitch’s daily driver, not just an off-road toy so reliability was key. You’ll notice the absence of a drawer system on this build. After living with drawers in several vehicles, we decided to forgo the 100+lbs of weight as we tend to travel now with plastic tubs that can be offloaded whenever we want. Plus, it’s a real PITA to have the floor of the cargo area raised 12” for daily use. To each his own…easy fix for the next owner if that’s on their list.

The paint is original and shows absolutely no fading or damage and shines like new. There is a dent in the passenger front fender from sliding off a rock onto a small tree and a door ding or two. Thought about having it pounded out but Mitch thought it added a level of seriousness to the rig so we left it…no paint damage. After every outing, Mitch turns the sprinklers on the undercarriage to clean every last spec of dirt off it and polishes/waxes the exterior. We also touch up the undercarriage with Rustoleum Satin Black when back home as well to stave off future degradation. The door panels, carpeting, headliner, wood trim, etc. are all in excellent condition. The only wear area is the center console cover from elbow use…typical. Cosmetically, she truly is in fantastic shape.

I have not totaled up all the receipts and time we have put into this rig nor do I want to but I doubt I could replicate it anywhere close to the price we are asking let alone find a Hundy this clean to build out. There is nothing on our "to do list", in our eyes, it's perfect in every way and believe it would be hard to find one like it anywhere. As you'll see in the pics, we have had a lot of fun with this 100 but in no way has it ever been abused or mistreated - this has not been used as a dedicated "trail rig" even though we built it to take whatever we could throw at it. If you're looking for a turn-key 100 to start driving and enjoying, then this is the one.

As mentioned earlier, below is a link to a dropbox folder containing 95 pics of the gal. The pics in the aircraft hangar were shot 5/24/19, not when it was new to us. I've included additional pics of our adventures which span our ownership so you may notice some slight variances in the configuration over the years.

Dropbox is a free service that lets you bring your photos, docs, and videos anywhere and share them easily. Never email yourself a file again!

If you don’t need the Refrigerator and RTT, I’ll reduce the price by $1,000 and keep them. Also, if you are interested in the sub/amp which will literally knock the fillings out of your teeth I can add that back into the mix for $1,000. I run this amp/sub combo in my boats and rigs myself, it’s pretty stupid but fun. Here are the specs on that setup:

We have the clean and clear title in hand ready to sign over to the new owners.

Please don't hesitate to give me a ring if you have any further questions. I don’t spend my days on-line checking the forums…please call or email direct to get ahold of me. 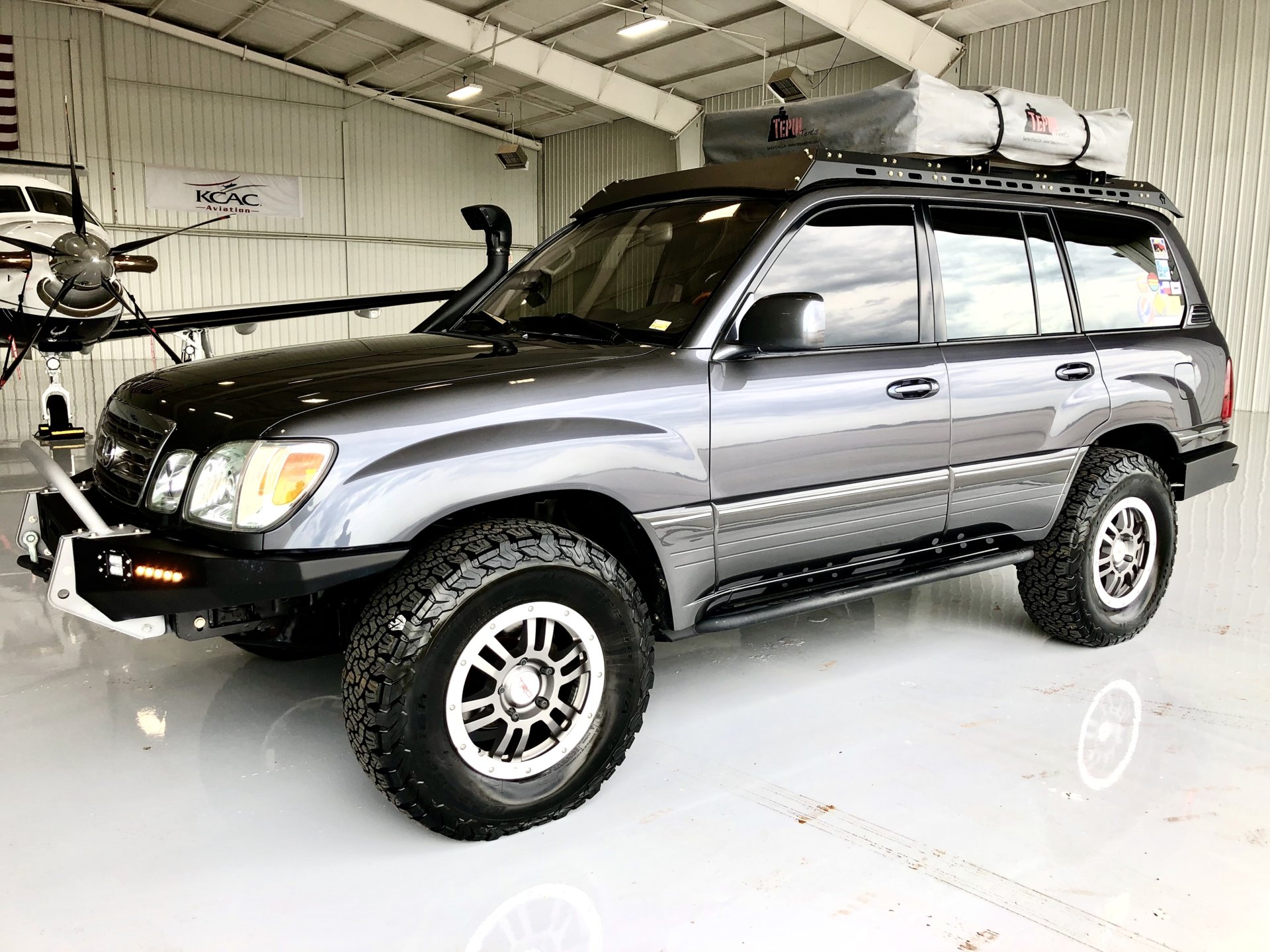 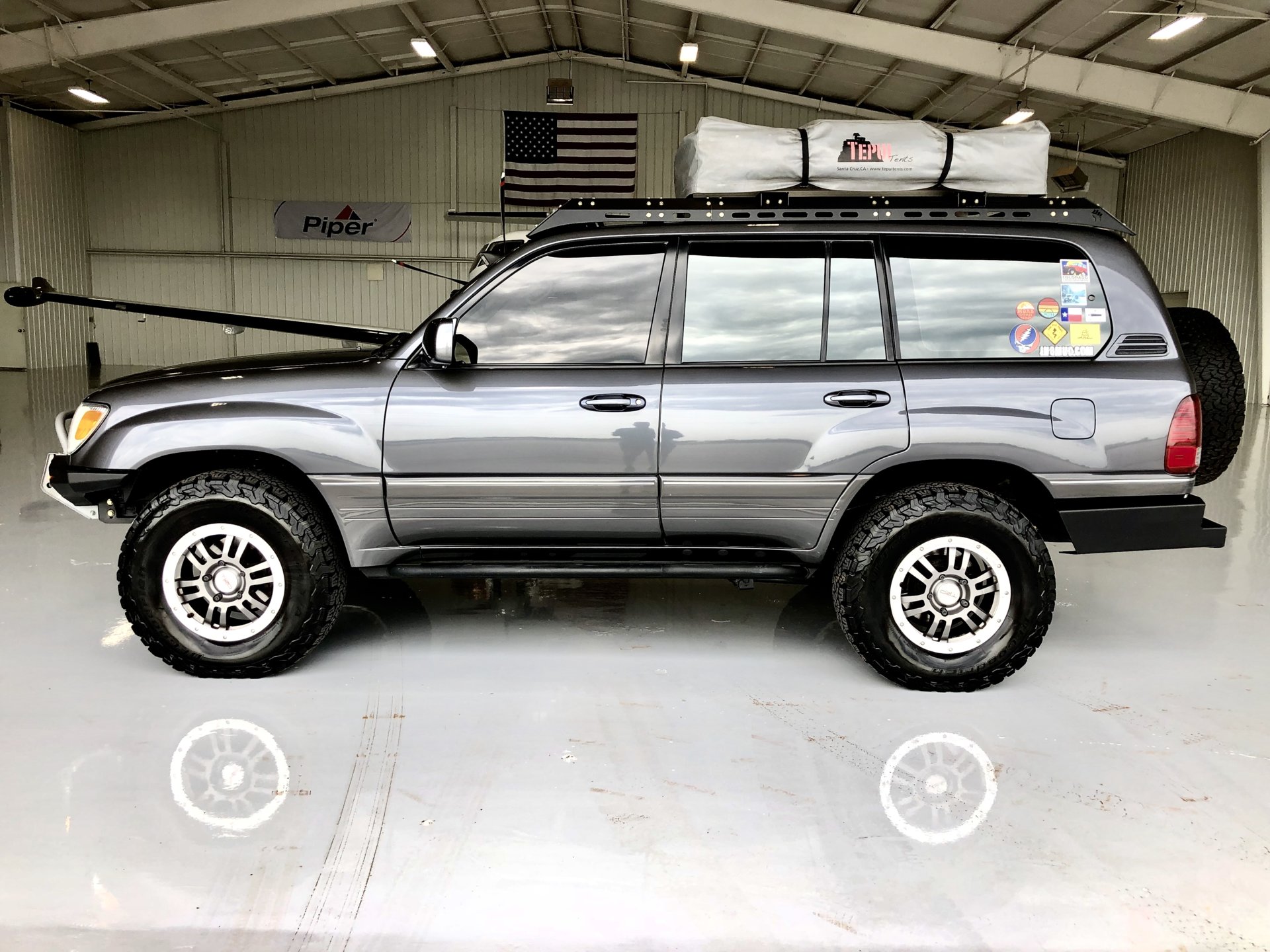 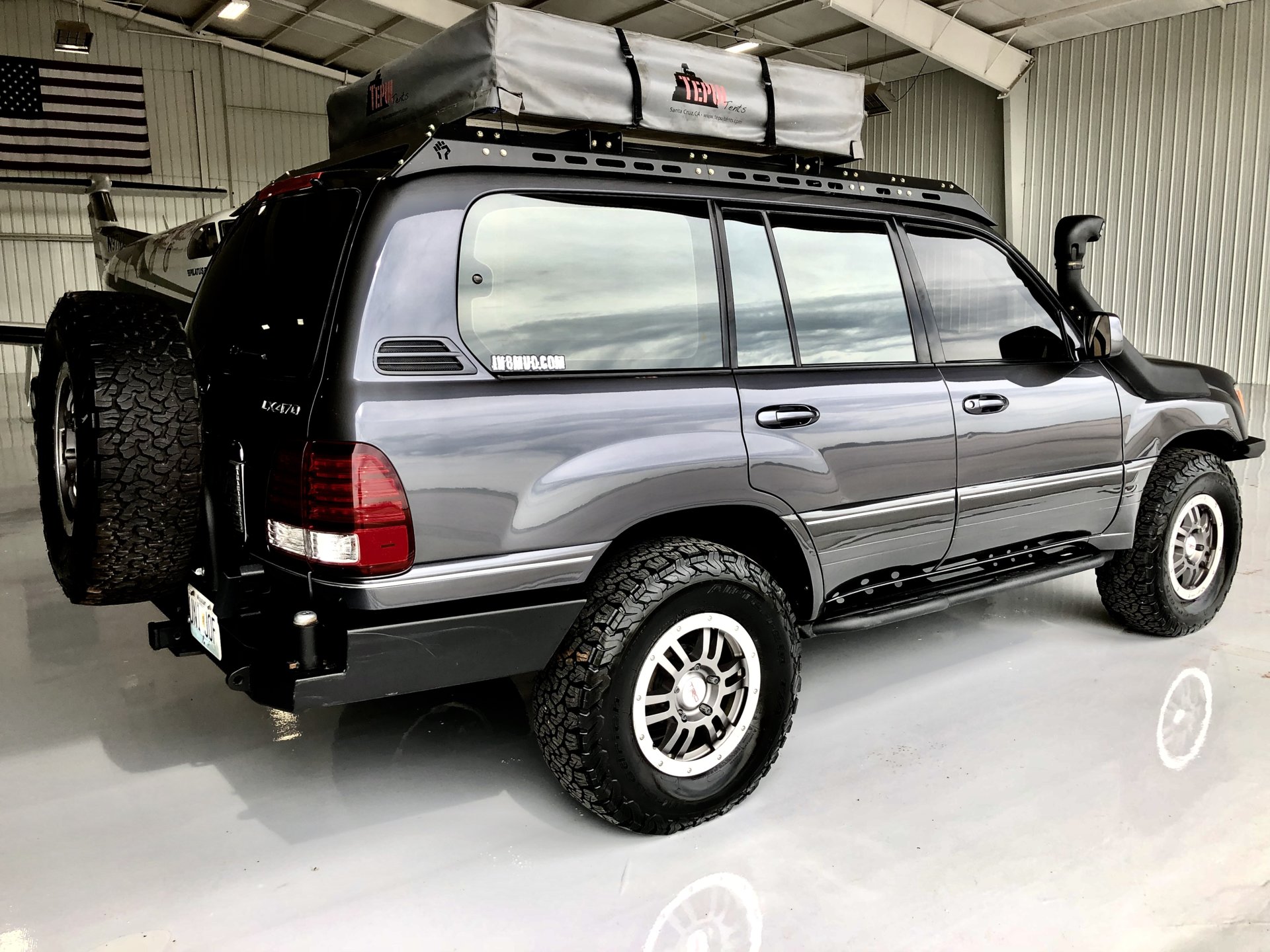 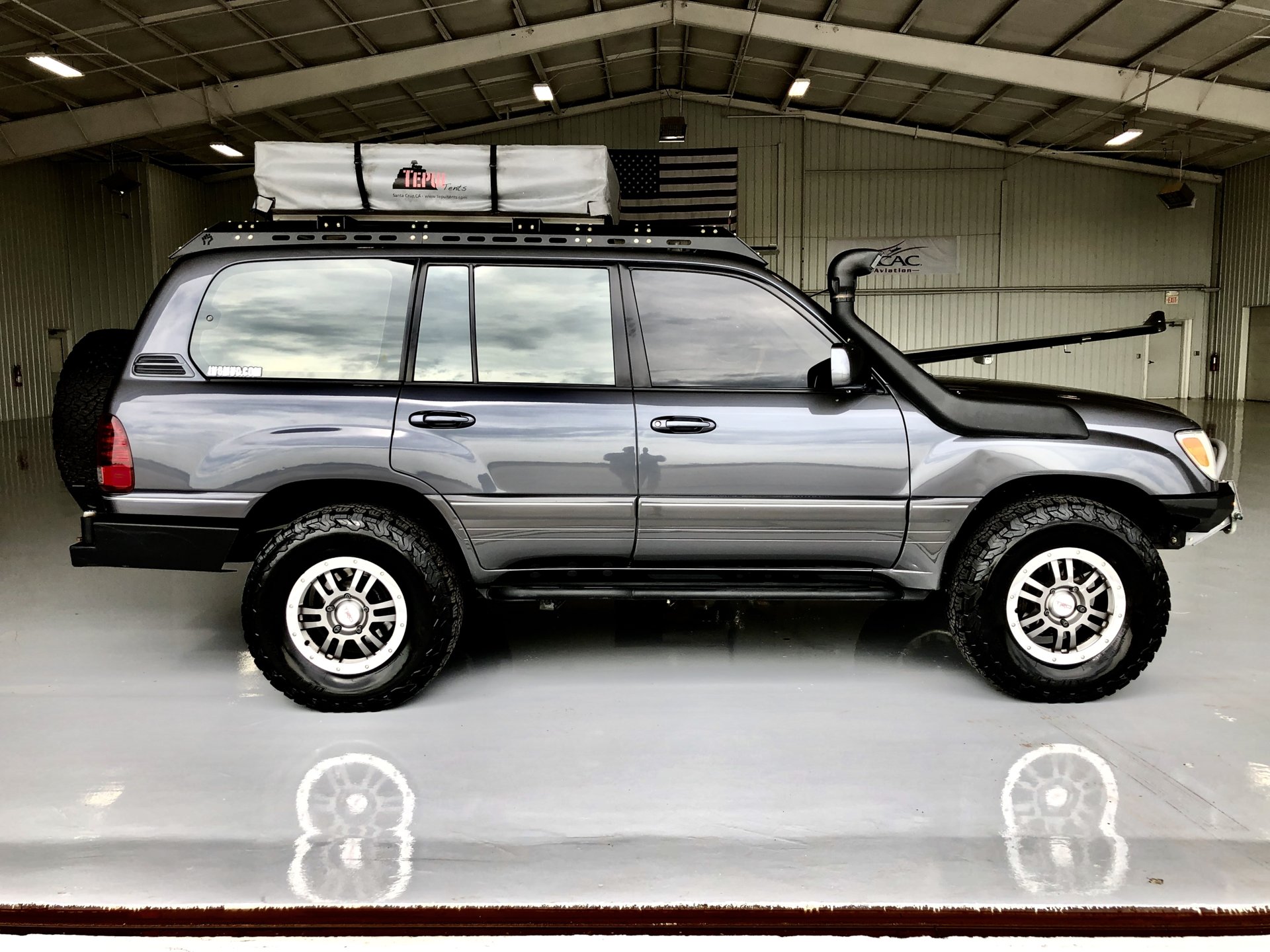 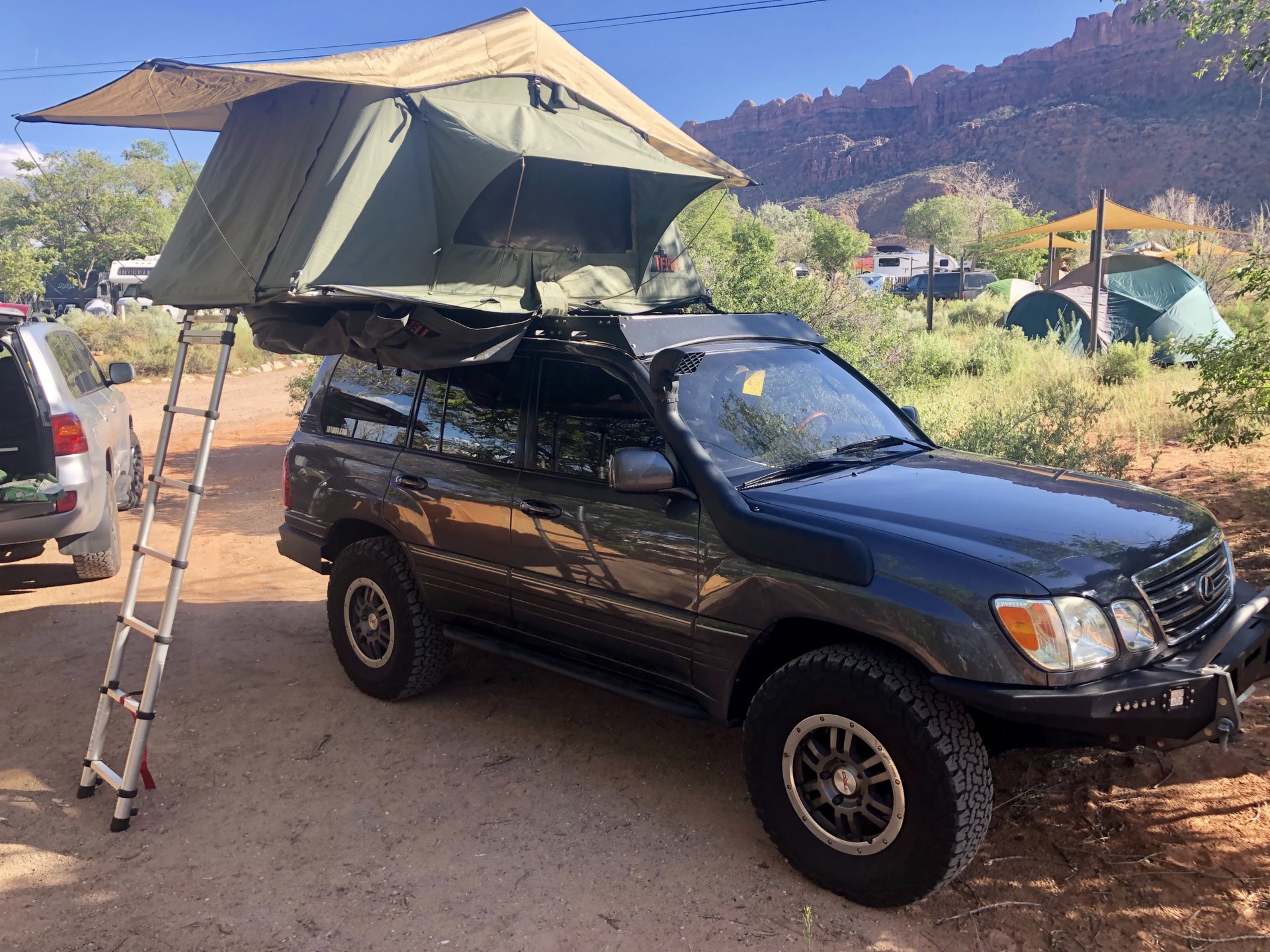 Should be working now...might have to refresh your page to get the corrected link. Thx for pointing that out.
S

I love how conservative the truck looks. Can you make your first post into a build thread? This is the kind of build I'm going to aspire to.

Beautiful rig. Willing to drop the price if the buyer does not want everything on the roof?

@racebannon Absolutely. If any of y’all don’t need some of the kit on this rig there’s always a way to negotiate items out. I’m generally not quick on replies here but you caught me sitting at my desk...best way to reach me is to call my cell and we can discuss options. 816 - EIGHT SIX THREE - 8600. If I’m awake I answer. Thx for your interest, Dave.
W

Sold to James in CA. Thx y’all.
You must log in or register to reply here.