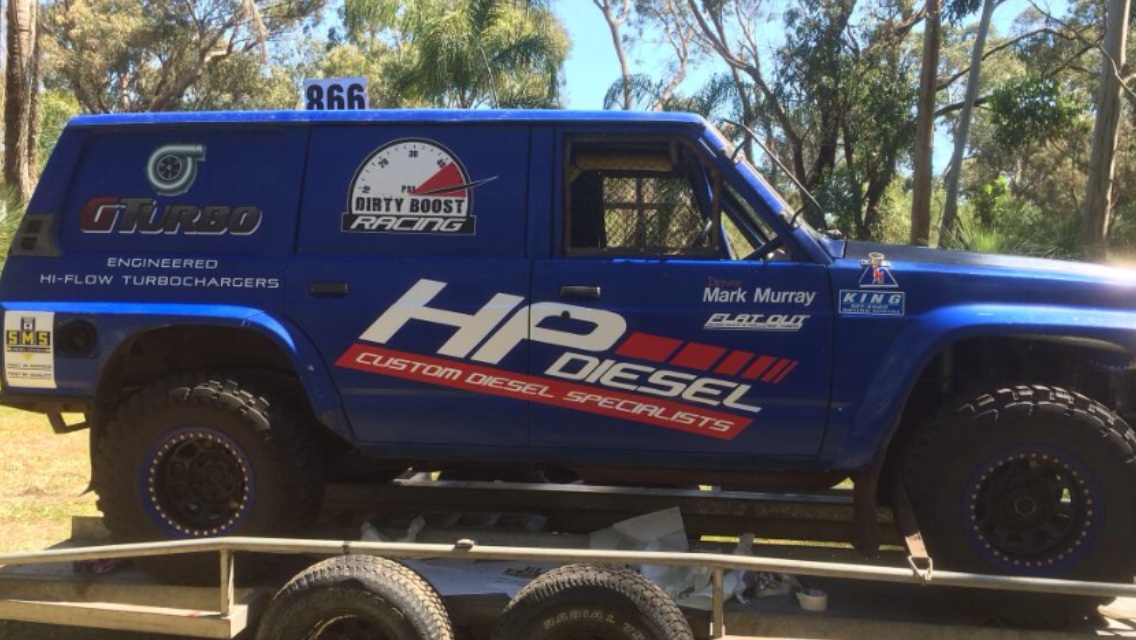 Hi all, we have been having some fun lately racing a Nissan Patrol fitted with a 1HD-FTE. Built and owned by Mark Murray of HP Diesel.

Performance has met our high expectations in real use however it won't hit a dyno until December.

Running a calculated "just over" 1000nm engine torque at 2100rpm and ~ 350whp, it was very competitive in the race last weekend (Pirtek Three Spings).

Unfortunately only raced in 3 loops (~ an hour each). First lap did a tyre, second lap fine. 3rd lap diff hit oil drain landing after a big jump ending the race.

On the one good lap Mark was fastest in class 7 and 8 and was catching the faster buggies on the straits, loosing them on the rough stuff. Only diesel in the event.

All in all the latest 55mm turbine (replacing the earlier Grunter and Bad Boy 52mm versions) off the shelf Bad Boy spec turbo performed without fault despite being punished. Max speed according to GPS speedo was "only" 175km/h but it was very muddy conditions.

A custom turbo is in the works to replace the Bad Boy Extreme and is aimed to be raced at 50psi with ~ 380-400whp!

Even I am suprised at just how quick this brick on wheels is. In the videos (on at least one of them) you can hear the on/off throttle response.

As a result and due to recent design improvements, for all 4.2L engines, all Grunter Extremes are warranted safe to 32psi, Bad Boy safe to 35psi and Bad Boy Extreme safe to 38psi.
Last edited: Oct 6, 2014

What gear box is it running and if manual what clutch set up?

I just installed your turbo and it was great but short lived. My stock clutch couldn't handle the increased torque. Granted my foot could've had something to do it too.

Location
Centre of the universe

That sounds amazing! Would love to see a vid or Dino when you can.
g

Pics & dyno or it didn't happen ..sounds great , what internal engine mods were done to the 1HD-FTE ?..or is still factory spec .
Interested to hear more on this .
H

Doesnt this forum have a Vendors section.

The next race is called the "Gas Dash". It's in Canarvon Western Australia. 5th November.

As far as I know it's a national event which makes it very competitive (much larger number of entrants). It's particularly grueling because of extended sandy creek bed sections - long time at wide open throttle. In the past it's killed two 5.7L engines in this Patrol (detonation due to overheating etc). Sitting on 150-200km/h on soft sand really sucks the power and at this time of the year (November) it's really hot, could easily be 40+ deg C.

This isn't my car by the way, but since Mark is my brother I've been going to his races for years. And , I've been trying to convince him to run a diesel for years. In the past, there have been a few TD42 entrants but the engines haven't proved reliable which is why he never bothered to run one (obviously easier.....). Some certainly had some power and I watched them with interest. The problem has always been that the setups in TD42s are always run so rich that the pistons usually pickup on liners, crack liners, crack pistons, crack heads etc. a few people are working on them so I'm hoping someone will run a TD42 soon. All in all they need more cfms from their turbo and better piston cooling (my opinion).

So this next race will be interesting.

The engine itself it dead stock done over 300,000km and never had head off.

It will be replaced with a full house rebuild with special components etc for next year to hopefully lower EGTs/extend time possible at max throttle.

A troll with a 1HD-FTE. That has to ruffle some feathers!

Well done, I look forward to any photos/videos you can host outside facebook.
G

is that FTE with stock internals .. everything .?

How is the low end torque and engine response with 55mm turbine .?
G

It has a massive intercooler, 4" exhaust and massive air filter.

It has a massive intercooler, 4" exhaust and massive air filter.

As for the bigger turbine, I expected more mid and top end, but Mark reports better bottom end and response with mid/top about the same.
You must log in or register to reply here.