FWIW, the internet wasn't that effective. Lots of emails and calls from within a few state radius, and few low offers. I parked it on the side of the highway and it sold in 12 hours.

I really want this to go to someone who has been shopping for the right 80. This may be the one for you.

Complete service records since 117,000 miles, as you will find listed below.
Three owner truck: original buyer, and two mudders.

This Cruiser represents the classic symptoms of Cruiserholics disease and an addiction to Mud – as you will see I was (and still am) delighted to own this vehicle, and it’s care and feeding was my top priority. My career is a field cartographer, which puts me in the dirt road part of the world most times. After owning many 4wd vehicles I was ready to move to the top of the food chain and build an 80. I spent 6 months researching, learning about, and shopping for an 80, eventually finding this on MUD classified. It has been, and still is, and awesome vehicle, and I will regret selling it (as most 80 owners do). But I bought a Tacoma and I just won’t use the 80 very often so I’d rather it go to someone who will.

Complete service records since second owner beginning at 116,000 miles. I bought it in 2007 with 131,000 miles. Previous Owner (PO) never took it off road and replaced it with a 100 Series. I bought it sight-unseen as a fly-and-drive in Virginia when I lived in northern Maine. It was everything the PO said it was, and I’m doing the same.

This truck is totally turn-key ready to drive anywhere you want to go. I built it to be the best of both worlds, in that it is a wonderful highway Cruiser but when the pavement stops it has what you need to get to your destination. It is not a rock crawler. It fits in parking garages. It does most expo travel things very well. Pennsylvania inspection and emissions thru 12/12.

This truck has never let me down and it’s safely taken me all over the eastern seaboard and Maritimes Canada, around the Gaspe Peninsula, along the St. Lawrence Seaway and northwest to the Georgian Bay in Ontario Province, all over New England and the Midwest, south to Assateague Island and the Outer Banks, as far south as Florida. It’s never been wheeled in parks or used as a trail rig, only in the context of doing my cartographic fieldwork, getting to our destination at remote lakes or mountaintop campsites. Adult owned and operated. Never towed other than the occasional U-Haul trailer.

TURN KEY VEHICLE. If you can take the next three months off to travel, you should buy this truck today. If you want a solid 80 for a daily driver or weekend warrior, I believe this is among the best available.

If you are looking at other 80s, use this maintenance history as a guide to what you may encounter in care and feeding costs. These are fantastic vehicles, but buying a truck with 150,000 miles and no records will quickly become a project. I have no regrets, I’m just pointing out that the so-called ‘deal’ on a sub-$8000 Cruiser may not be what it seems. These are older vehicles and you will need to address rubber parts, gaskets, sensors, etc. My Cruiser will continue to need maintenance, but this is an opportunity to buy a truck where you know exactly what you have, all baselining done, all relevant history records and receipts, and used as a daily driver which I think is preferred over the 80 that has sat for a year.

Oil changes every 4000 - 6000 miles, synthetic Mobil M1 5-40 Turbo Diesel or Shell Rotella depending on availability. OEM filters from C-Dan. Also drain and fill 4 quarts of synthetic M1 tranny fluid on most oil changes. Not at every time because it really doesn’t need that once you have refreshed the system. The tranny drain bung gave out at 175k so a new tranny pan was installed. Filter was cleaned as PM of course. It actually looked perfect anyway. Mobil M1 gear oil in rear and center differentials. Standard oil in front diff due to recent birf job. I used to run M1 in the front but I had the birfs done a few months ago and my shop used dino. Cruiser has always used Toyota Red coolant. Driveshaft zirks greased at every oil change. Birfs topped off with Valvoline palladium moly grease as needed.

158,000: New Moog Tie Rod ends (lifetime guarantee) and alignment. ($325) Note – one of the few non-OEM parts, because Mr T didn’t have them and when your truck is up on the lift what can you do? Search MUD and you’ll find the Moogs are well regarded. I’m not sure if the warranty follows the part or the buyer but I have all receipts.

180,000: Rear heater lines disabled (re-routed) as PM due to corrosion on solid lines where they pass over the tranny. Common MUD task. Solid lines are NOT leaking, this was simply PM, easy decision especially when you don’t use the back seats or need rear heat.

181,000: Drivers door master window switch panel replaced. One of the few non-OEM parts, used a source common on mud board. I had rebuilt the OEM panel twice but the contacts were still slow. This knock-off version works fine, although there is one sweet spot needed for the right rear window you will soon adapt to.

194,000: Birf repack with all Toyota parts. Right and left axle shafts replaced due to rubbing wear at axle seal. New OEM brake rotors, pads, wheel bearings. New LPSV unit installed. You can have the original axles as trail spares if you like. ($2700)

Slee Sliders, the running board style.

Class three hitch on rear with new Hoppy trailer wiring harness. This was mainly to hold a bike rack. I don’t own a trailer.

Yaeso FT-7800 Dual band 2M/70CH HAM radio. Head unit mounted on dash, power unit is hardwired in far rear passengers cargo hold. Comet Diamond hatch antennae with foldable base to allow garage parking. External speaker wired to cab, but this has a short so it is unplugged currently. You can still hear the unit broadcasting from rear cargo area, although if you are packed with gear it is muffled. Should be an easy enough trace, short is most likely along floorboard.

Husky Liners (black) for drivers and passenger front and back seat floorboards.

Slee light harness wired for extra lights. I used to run Lightforce 170s on the ARB but sold them a couple years ago when I upgraded the factory lighting. The plug connectors are behind the grill waiting for another set, clean switch is wired in the dash.

New OEM drivers side mirror to fix shakey mirror syndrome after my mod fixes came and went a few times. Original (shaky) mirror included in case you need anything from it.

Rear heater pipes above tranny were starting to show signs of rust. I did the bypass mod in the engine bay since I don’t use the rear heater. In fact, I rarely had the rear seats installed. The underbody metal lines are not rusted through, they simply started to show signs of corrosion and I didn’t want to deal them being an issue in the field so I had them bypassed.

Factory mudflaps trimmed for Slee sliders and cut off a few inches for better clearance.

Seats: Leather is all torn up on drivers seat base, mildly split but not too bad on passengers. Rocky Mountain sheepskin covers are included. Drivers seat foam base cushion (butt pad) replaced with OEM from C-Dan in 2009.

Both front doors have had the rubber window molding replaced so windows do power up and down easily.

No factory roofrack is a good thing, as the originals may leak and with full gutters you can install many rack options.

BAD STUFF (but perfectly normal and common for 80s):

CEL PO401, the classic CEL code omnipresent on most 80s. I can reset it with the ScanGuage, but it returns in a few days. It doesn’t affect my ability to pass inspection so I haven’t bothered to do the repair. I reset it regularly to be sure another code hasn’t popped up.

Rear windows are slow in cold temps, new rubber would solve this issue. Front window rubber replaced. Again, I rarely had the rear seats in, so rear windows aren’t a priority.

A few minor dents from shopping carts. Paint and clear are in very good shape, I have it professionally detailed each year and most of my brush scratches buff out nicely. It was just fully detailed inside and out. I power washed this truck every week in winter and on my travels, I believe it is one of the cleanest 80 series on the east coast. It’s been a daily driver the whole time I’ve owned it, it never sits still for long, and it is usually garaged.

Several bulbs are burned out in the heater control panel buttons, I have the bulbs but haven’t installed them.


Probably more stuff in the garage....

I’d rather you email me directly: mike {at} purplelizard {dot} com, I don’t check the board as often as email. 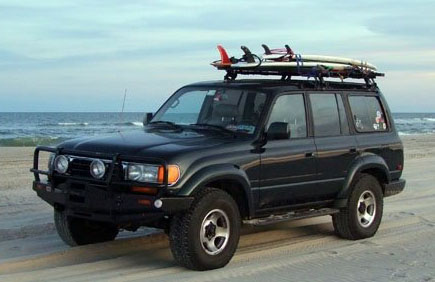 It's obvious you have loved this truck... But I'm not gonna be the one the give you the bad news first! GLWS

Texus - Everything in life is negotiable!

BUMP Somebody wants to drive this away, and I want my garage space back!
Last edited: Sep 18, 2012

FWIW, the internet wasn't that effective. Lots of emails and calls from within a few state radius, and few low offers. I parked it on the side of the highway and it sold in 12 hours.

@mainemike I'm happy to say that I have this land cruiser. I bought it from a gentleman in state college pa. This is great stuff to find

Excellent! I actually called him a few months ago to see if he still had it and he told me he sold it. Drop me a line, I'd love to see her again. mike@purplelizard.com I've been in the Philipsburg area a lot lately working on a map of Moshannon SF and Quehanna Wild Area.
You must log in or register to reply here.