Welp, a couple of months ago I talked the wife into letting my purchased a 1988 FJ62 on eBay. It took some convincing but it had to be an FJ62 for the auto so she can drive it too (Guess H55 swap is out of the question). I've been working overseas, had to get a friend to pick it up for me and the wife has been driving it around a bit. So, this far I haven't even seen it, besides a few photos, but I can't tell you how excited I am to start wrenching on it. From what I can tell from the CarFax it was originally an NC car until the previous purchased it and brought it to NJ, it now resides in the mountains of WV.

I've already started ordering parts for it. Since my wife said the brakes aren't very good, so I plan on redoing those first. Reading the forums, I've opted for the 4Runner caliper w/ a T100 master cylinder. My friend also said the steering was a bit loose, so I plan on ordering Cruiser Outfitters complete replacement steering linkage which includes Tie Rod, Drag Link, Relay Rod, All Ends, Clamps & Hardware. I know it's hard to tell if they're opinions are accurate or not, but I'd rather replace them and get a baseline set for the vehicle and know I won't have to worry about them later on. Luckily this FJ62 will an extra vehicle and I'm finally somewhere I can afford to do a "vintage" car justice. I think I've read through all the FSM a couple of times now, that how excited I am.

Here are some of the plans I have so far:

With all the being said, what are of your suggestions on things go through when I finally get home to it. 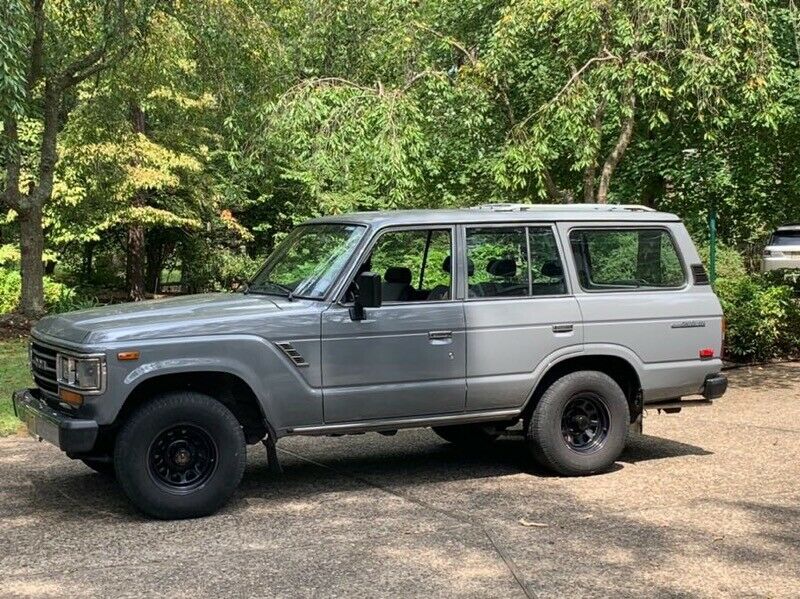 What's the reasoning behind a transmission cooler? The FJ62 radiator has one built in that should be sufficient for most applications.

PO said that the engine just had a "complete professional engine overhaul and tune-up". Although I'm not really sure what that entailed. I plan on pulling the valve cover off and repainting it since it's all flaky. So, I'll probably give it a check then.

Isn't the trans cooler generally suggested? I do expect to tow a little bit, mainly to and from the hardware store and dump (home renovations ). That plus I live basically on the side of a mountain so why not, plus the Hayden cooler is only about $45 plus some hose and fittings, so I'd rather be safe than sorry. I may just throw a trans temp gauge on and watch it for a bit, but if I'm replacing the radiator I don't see why not throw in a trans cooler in there at the same time.
Last edited: Feb 5, 2020

diesellibrarian said:
Valve adjustment should be on your list.

What's the reasoning behind a transmission cooler? The FJ62 radiator has one built in that should be sufficient for most applications.

The factory trans cooler on a 62 is not even close to sufficient. The A440’s run very, very hot and need a lot of help staying cool.

Maybe a necessity in Arizona.

Coolers lose their efficiency after 30 years. I'd bypass a factory trans cooler yesterday and add a larger, new one.

Yeah, the way I see it, it might not need it, but it's not going to hurt to add it in just in case it does.

That being said I am planning on upgrading the radiator to a Mishimoto 3 row. So the radiator based trans cooler is getting a bit of an upgrade, but still planning on installing a Hayden 689 cooler at the same time.

Even in the winter here 50-60F temps, my old 62 trans would run 230-240F. A Derale atomic cooler brought it down to 190-200F. Saying yours at 330k is fine is a testament to build quality, not the fact the trans cooler is sufficient. Say it makes it to 400km. What would’ve it made it to if the fluid was kept cool over the span of its life?

BlackCat said:
Even in the winter here 50-60F temps, my old 62 trans would run 230-240F. A Derale atomic cooler brought it down to 190-200F. Saying yours at 330k is fine is a testament to build quality, not the fact the trans cooler is sufficient. Say it makes it to 400km. What would’ve it made it to if the fluid was kept cool over the span of its life?
Click to expand...


What meter do you have set up for your Trans Temp?

poptart said:
What meter do you have set up for your Trans Temp?
Click to expand...

Man, I have not done a good job keeping this updated. Been doing a lot to it so far.

I got back stateside at the end of February and have been ripping into the Land Cruiser. Drove it around for a bit just to confirm the steering is sloppy and the brakes are less then adequate, but also noticed a lot of the lights were working, including the license plate light, front and rear side markers, and parking lights. License plate light needed a new wire ran to the harness, so I got that done. Luckily the rear markers just need the bulbs replaced, however the front markers just feel apart when I took them off to investigate. But new front markers are still available new and are cheap so those were swapped out. The real problem was the parking lights. One of the PO's was a highly qualified electrician and made the decision to cut the connectors and just twisted wires together. So the driver's side light was working but the passenger side one was only receiving about ~5 volts. 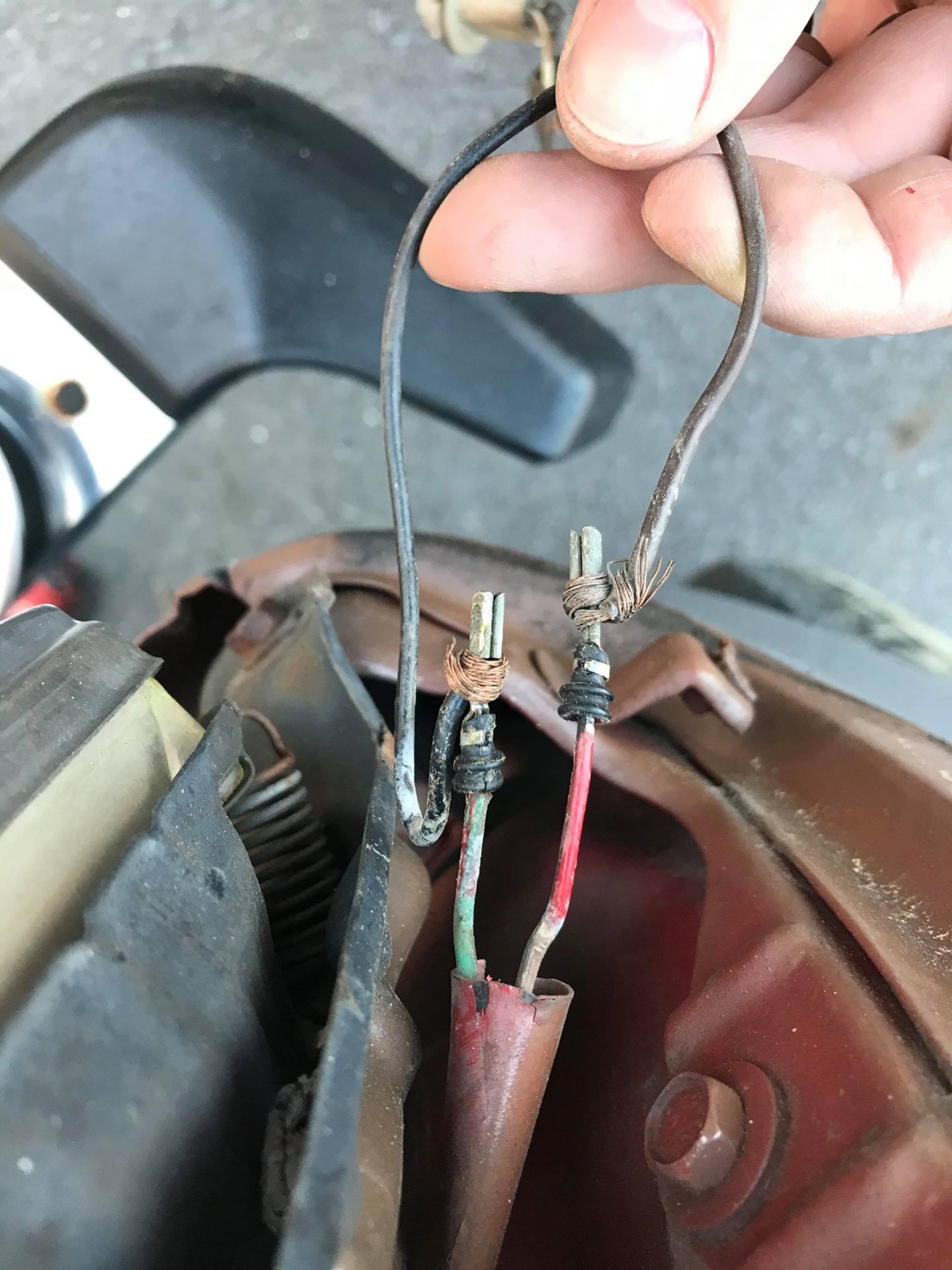 End up pulling the socket apart and soldering new pigtails on and install spade connectors on either end to get the lights to work without being hard wired in place. While I was at it I installed some LED's from PFran in both the dome lights and some 7w CREE bulbs for the back up lights.

Right now, I have the front axle pulled and prepping it for paint. I have both knuckles disassembled and painted. Just ordered a ARB OME Heavy kit from Cruiser Outfitters yesterday. So once that comes in I'll hoping be throwing everything back together with all new steering linkage as well.

Here are some pics of the front axle. Looks like one of the PO's welded on some reinforcement on the drives side and weld splatter was everywhere. Spent about a hour chiseling off all the splatter beads. 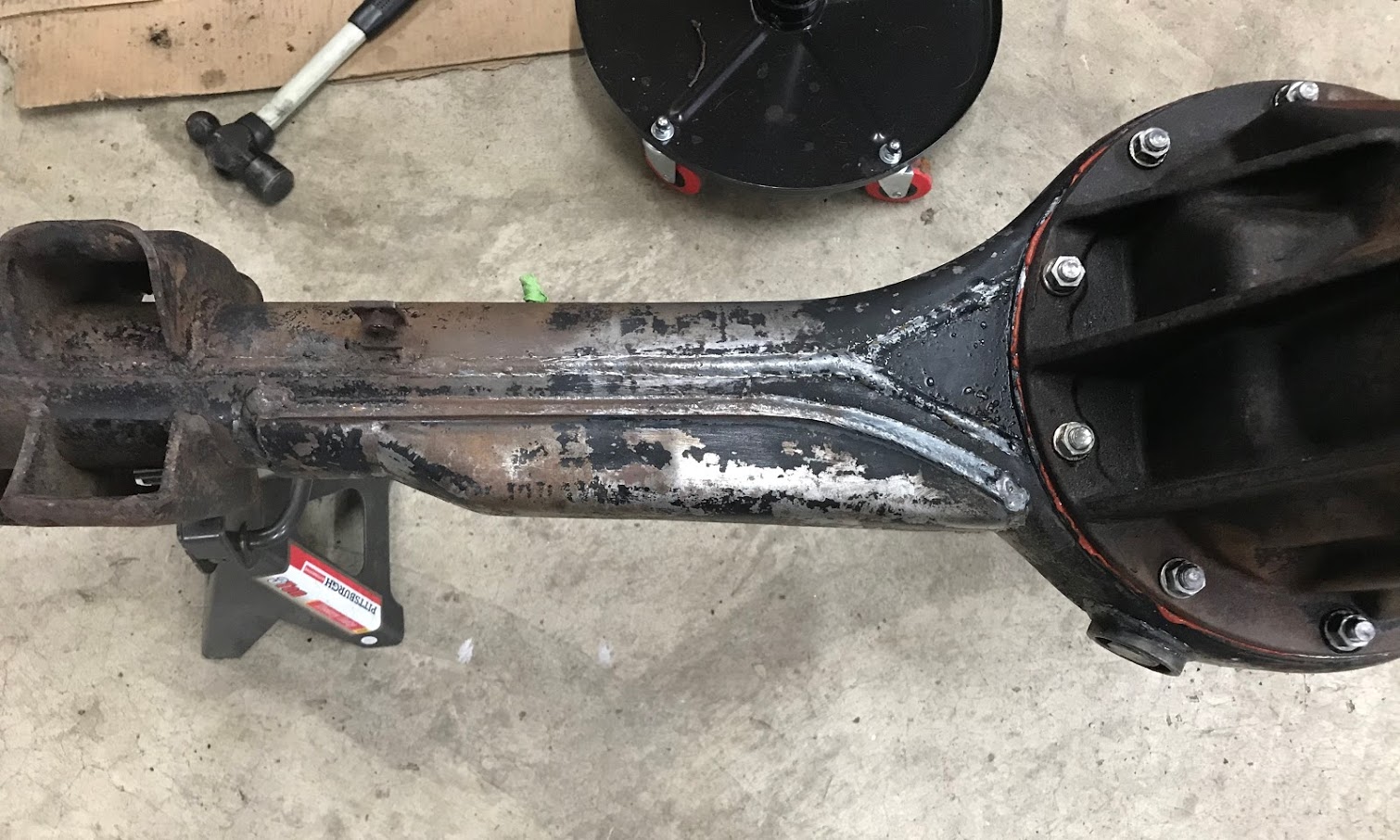 Also, notice the orange RTV they used as a diff gasket. They must of loved RTV because it's everywhere on the land cruiser. All the gasket surfaces on the knuckles had it, they used it on the oil pan and output of the transfer case. They were so heavy handed with it, it was in the gears of the locking hubs. They stuff is no fun to try to remove. Which will probably have my cursing this weekend when I try to replace the oil pan gasket.

That axle truss was welded on by the PO’s PO in Japan. It’s factory on the fj62 front axles.

Skniper said:
That axle truss was welded on by the PO’s PO in Japan. It’s factory on the fj62 front axles.
Click to expand...

Oh lol I guess I was comparing it to pictures of FJ60 axles then. Man those are some gross welds for factory.
You must log in or register to reply here.