Now that I've had the truck for a month or so, I thought I would start a thread here ...

This story starts when I was much much younger. After grad school, before I embarked on life in the so-called real world, I spend a few weeks in Europe where I first saw a 70 series LC. Kinda fell in love with these trucks then and, like a lot of us in the USofA, was amazed and a little PO'd that Mr. T refused to bring these trucks to the US.

DISCLAIMER: It is always interesting to buy a truck from a user on an enthusiast forum than start posting about items you are repairing. Steve, i hope you realize that anything I discuss is not a shot at you, but merely comes from my expectations for some items on the truck.

Fast forward twenty(mumble mumble)-odd years and this truck comes up in the classifieds. I remember following the build by the original US owner . Cutting to the chase, I committed to go see it in late September. After a few hours of looking and a quick phone call with @1978HJ45 to make me feel a little more comfortable with the breathtaking power of the 3B , the deal was cemented and I started the trek back from Atlanta up I-85 in a truck that requires a calendar to measure 0-60 times and can make 70 MPH if driven off a cliff ... with Saturday afternoon traffic on Atlanta's 285 and Clemson having a home game, there was a lot of suction holding me to the seat - but the truck maintained 110kph without too much drama (OK, other than the hills on I-85)

It's in my garage now and every time I drive it, I get a big smile on my face ...

From the VIN, the truck is a 09/1986 build date, BJ73LV-MRW standard. It was originally sold in Spain and appears to have been serviced for quite a bit of its life at Toyota of Valencia Spain. It is the standard trim, 3B diesel, 24V electrical, H55 transmission, and removable FRP top. Because it was a Spanish truck, it has a "roll bar" on which the back seat shoulder belts are mounted. It has approximately 248,000 kms on the odometer when I bought it.

The truck has some sort of add-a leaves on it. Anti-Inversion shackles that are mounted upside down and backwards, a front bumper that appears to have started life as a ARB, a 24V 12K winch, a European rear bumper, and an ARB roof rack.

The truck appears to have been used as designed, but does not show any obvious areas of abuse. The frame is solid, drive train has no significant leaks, and the body does not have the "rust in typical spots, easily repaired". It is not pristine, but there is very little if any bondo on the body (the left rear corner of the top has a little) and it has a few dings, scratches and small dents. The passenger door has been painted at some point since the Araco sticker has some over-spray on it. It does have some interesting quirks though.

Pics
I will get some more, but for now, I'll just use the poseur ones I shot for insurance purposes. For these pics, a few steps had already been done ... 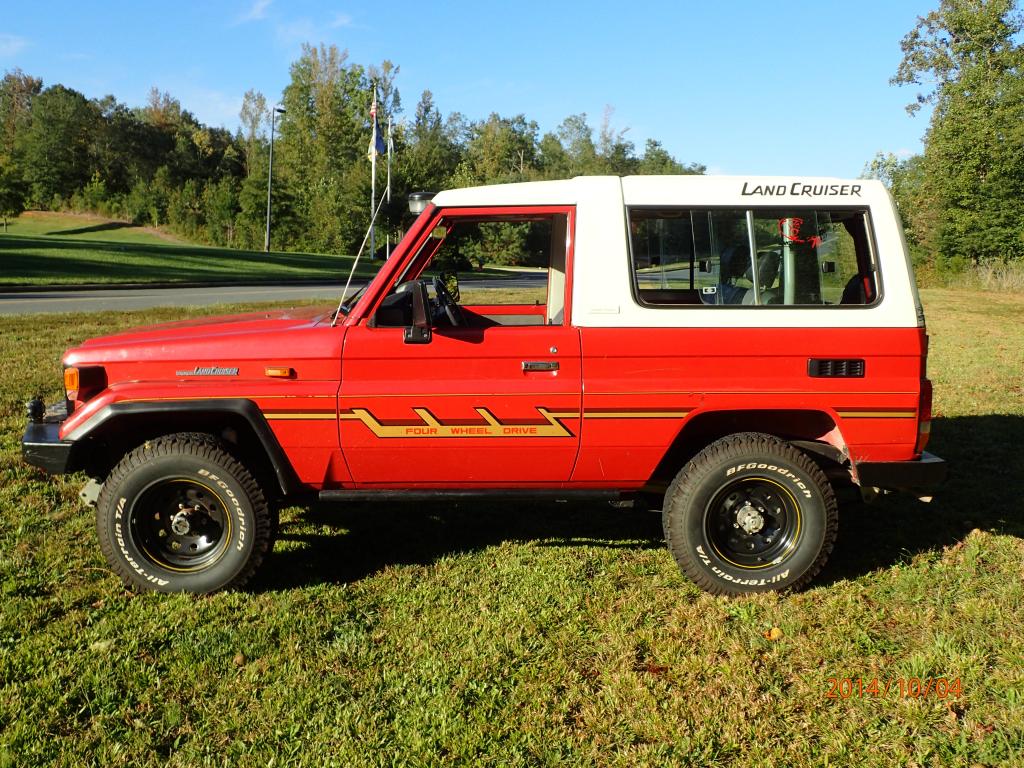 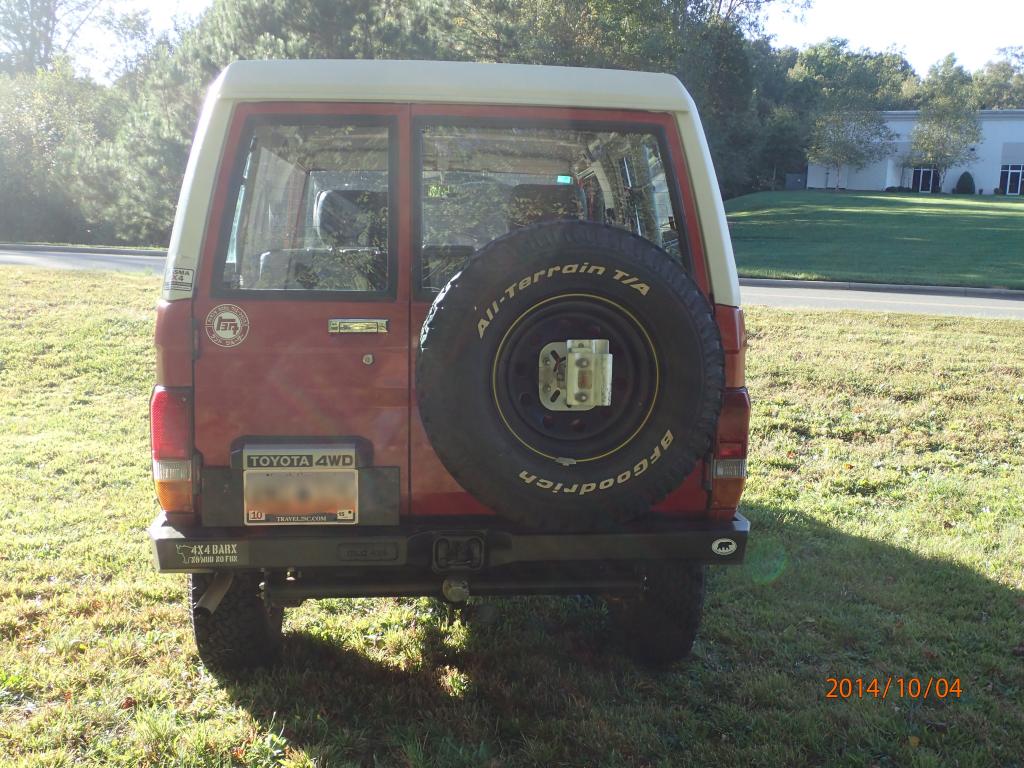 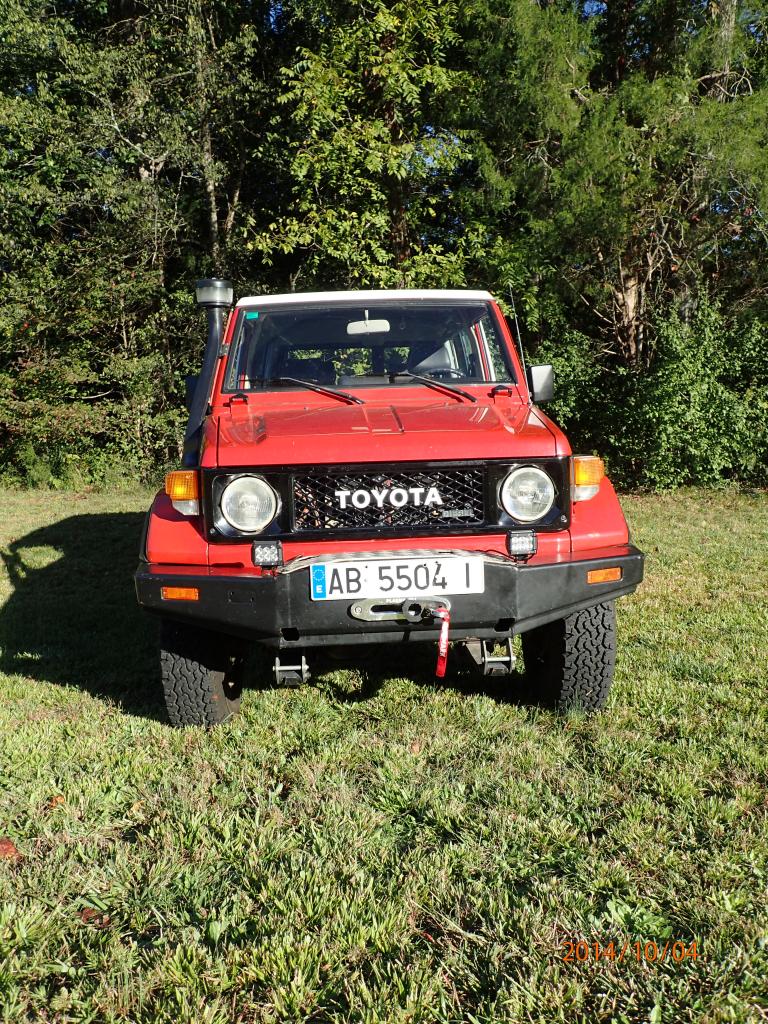 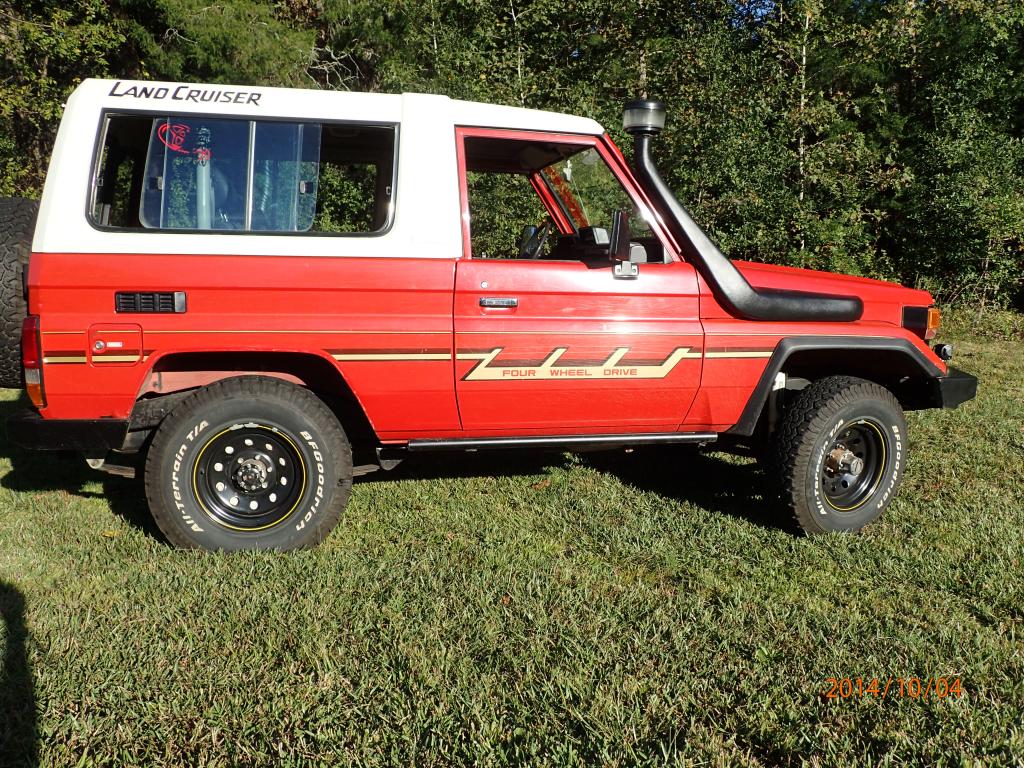 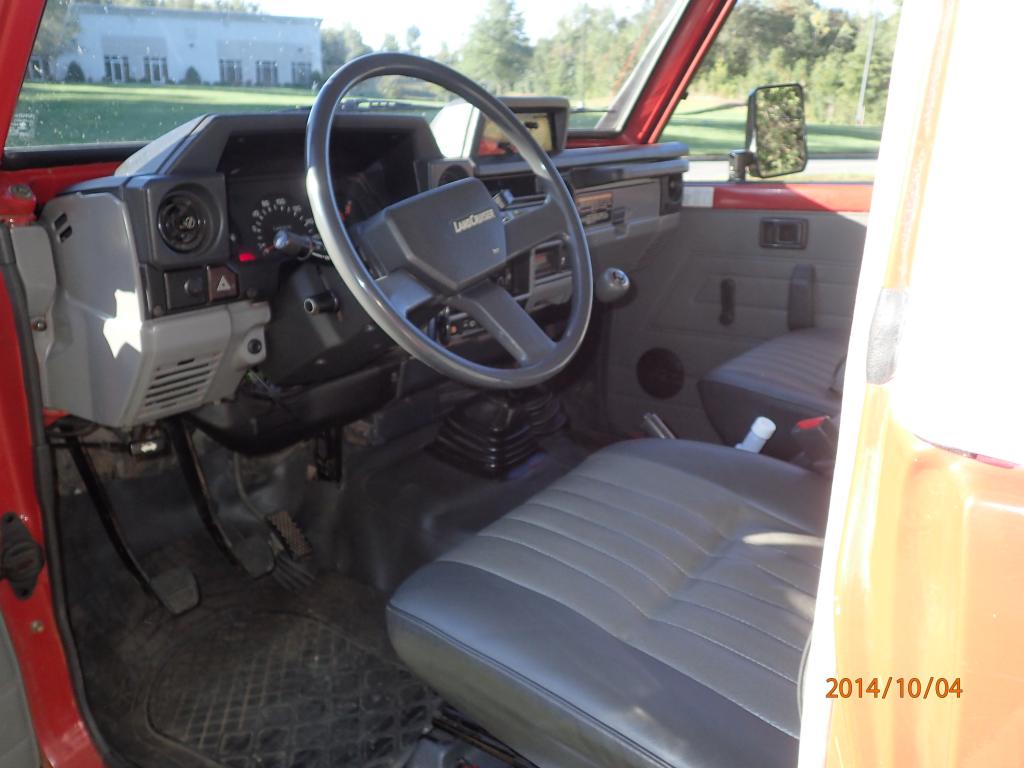 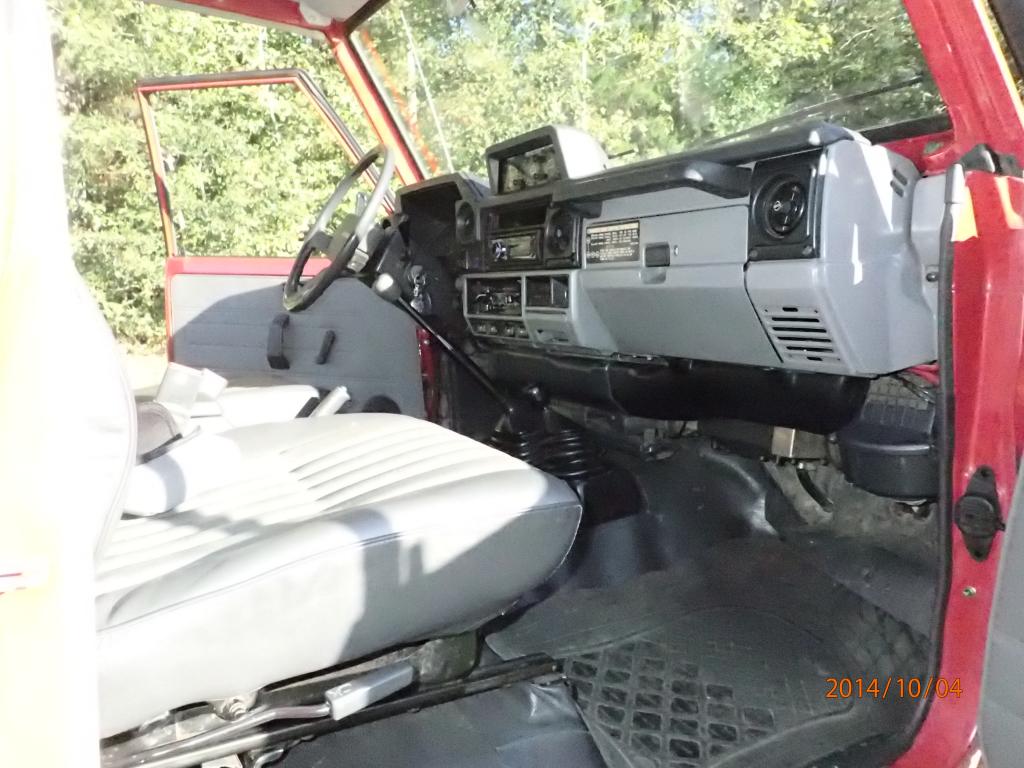 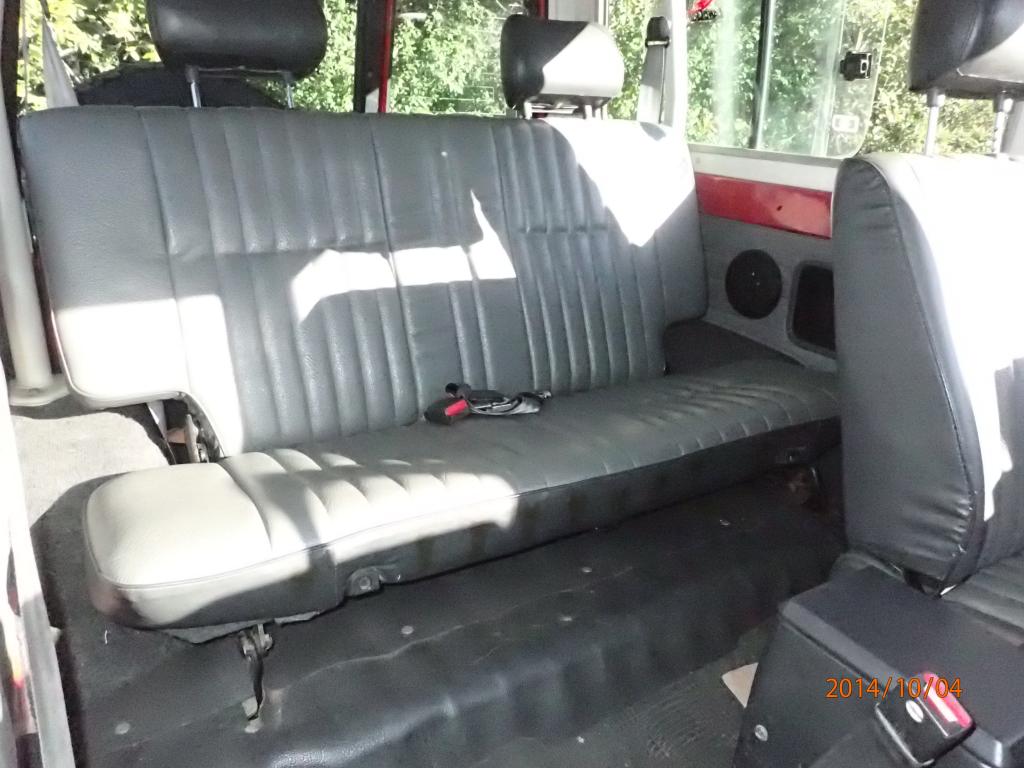 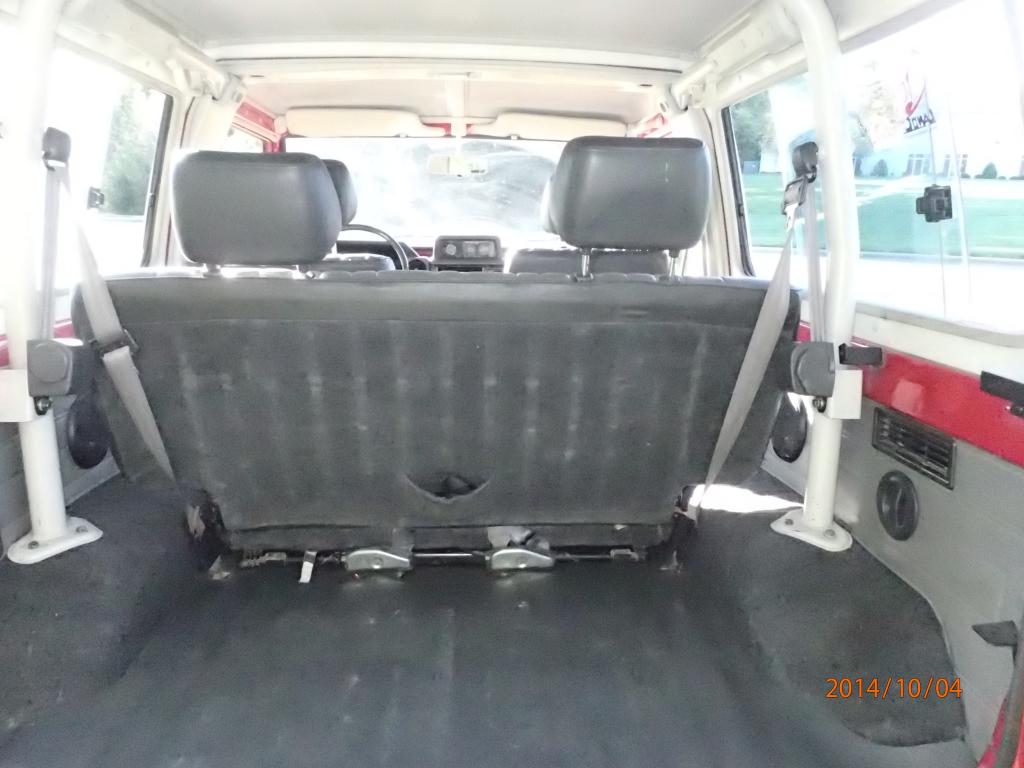 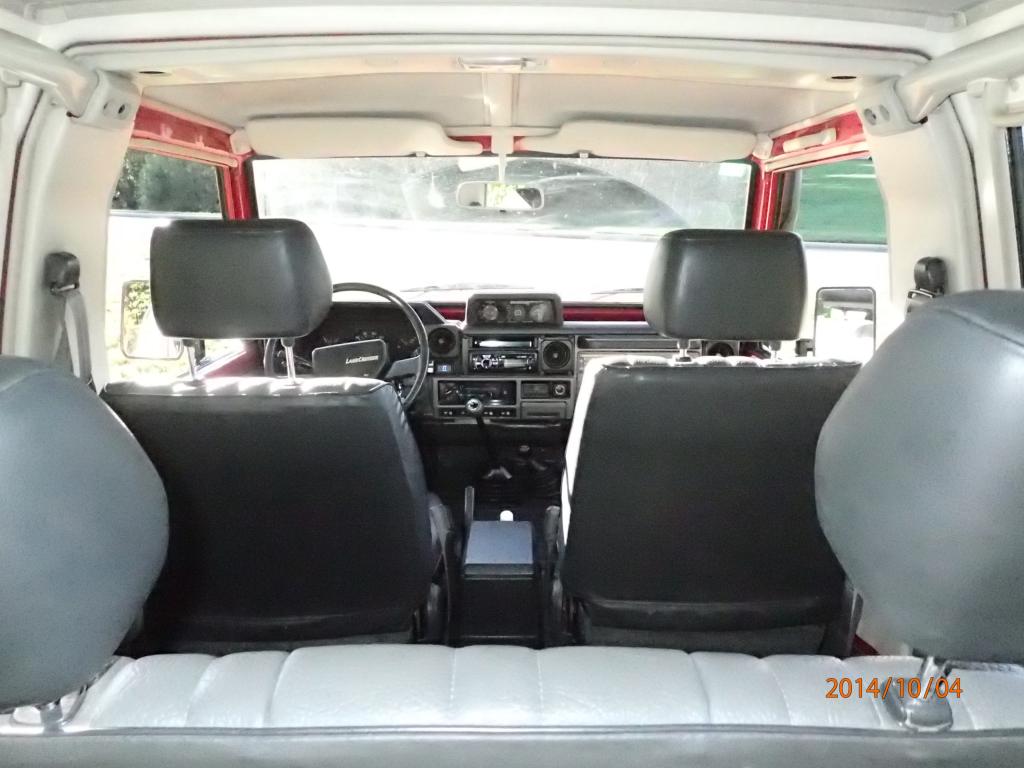 Quiz: Anything look odd in this picture? 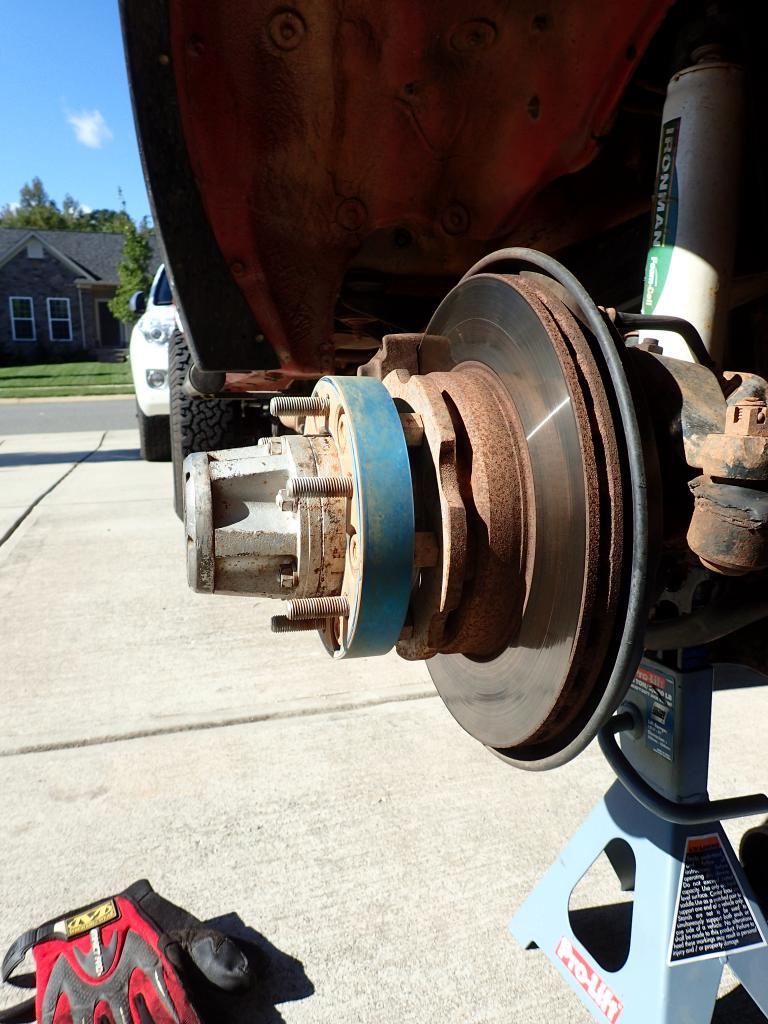 Yup, the spacer has spacers Easier seen in the next pictures 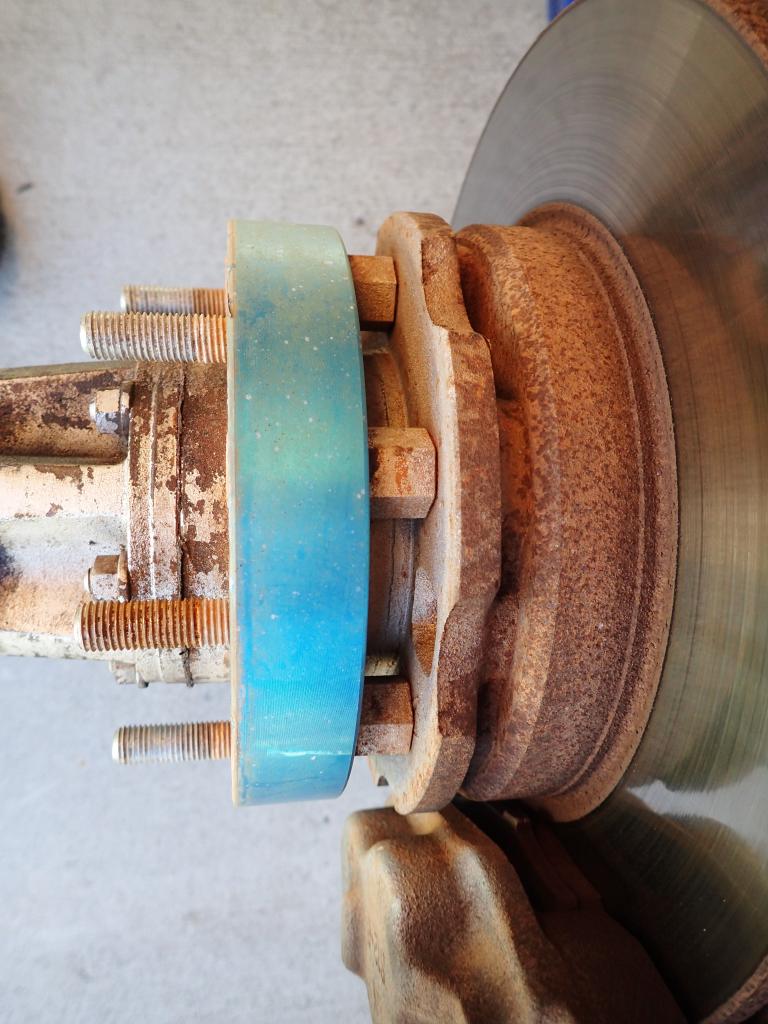 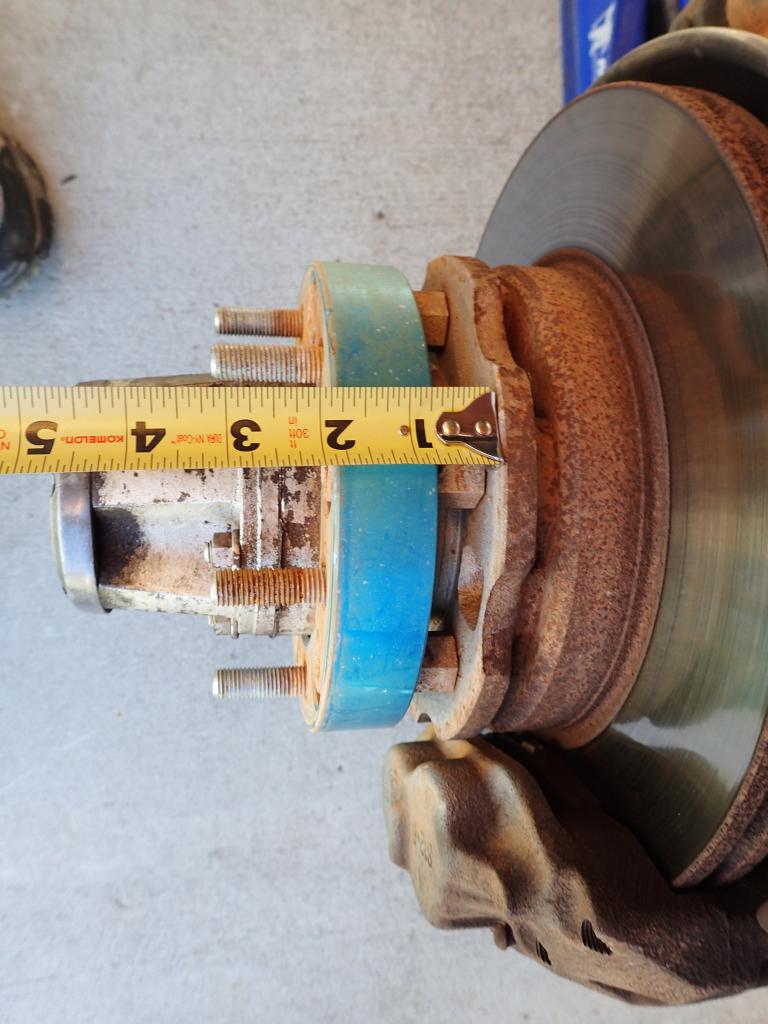 The wheels on the truck are 16x7 with 3.625" of backspacing, so I am not really sure spacers are required anyway.

Another thing I noted while working on this mini project was that there were 4 different types of lug nuts on the truck with three different sized wrenches required to remove them. Amazon was my friend, though it was cheaper to buy a box of 100 lug nuts than it was to buy the 24 I needed

A few pics of the remaining work. 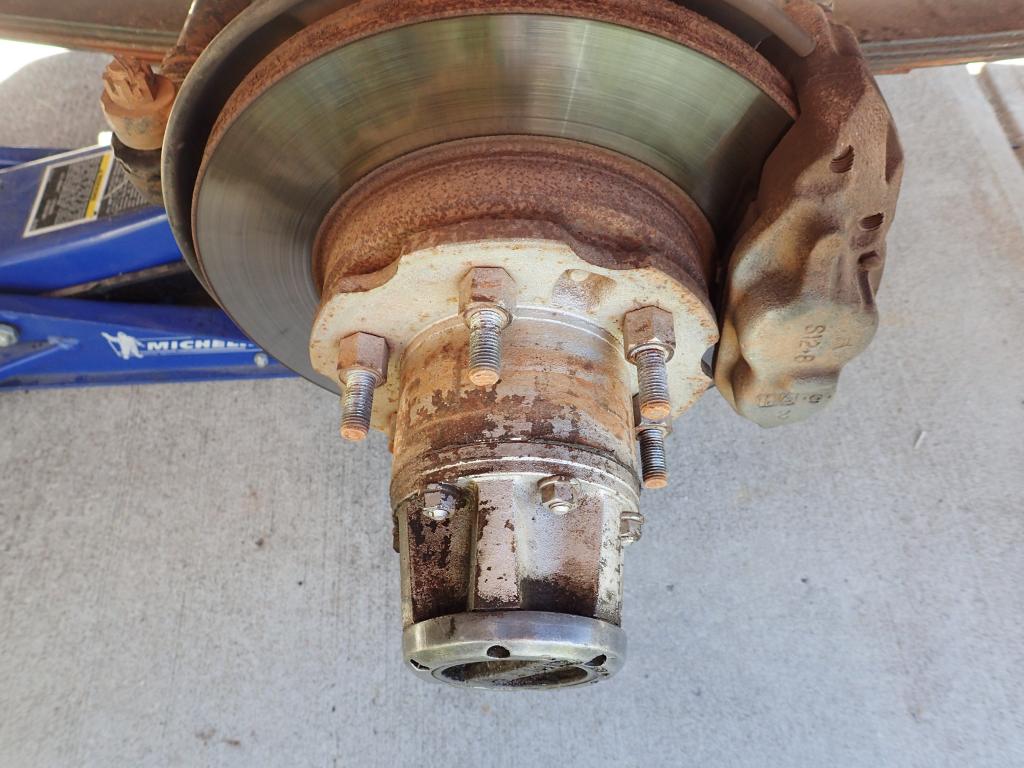 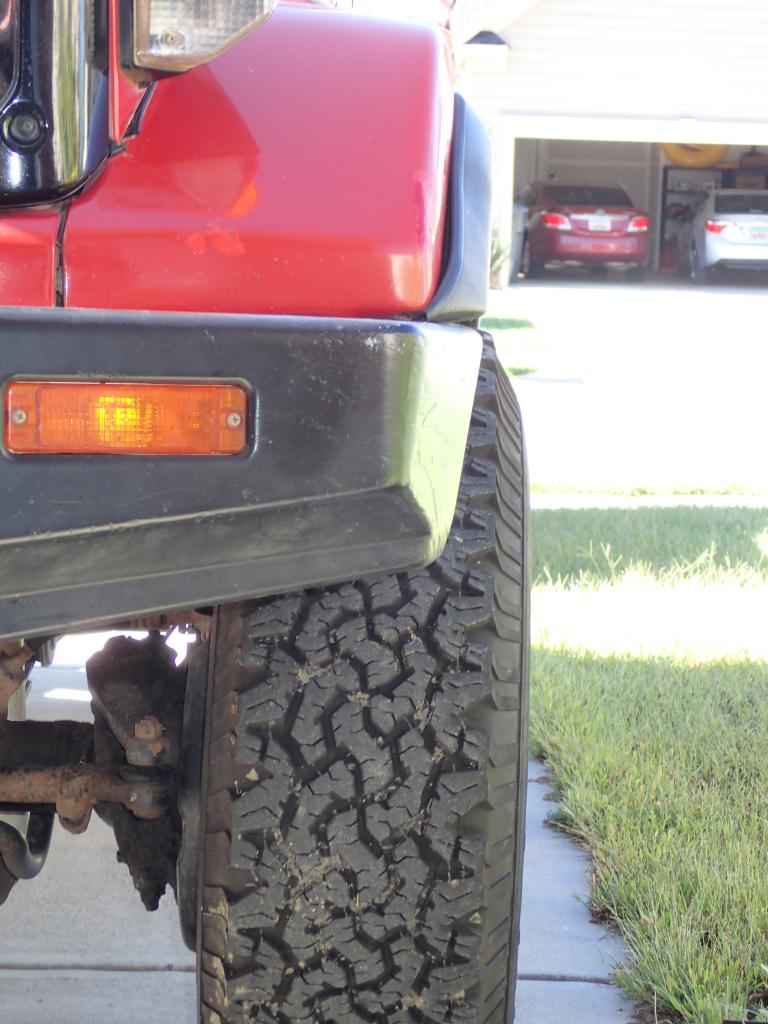 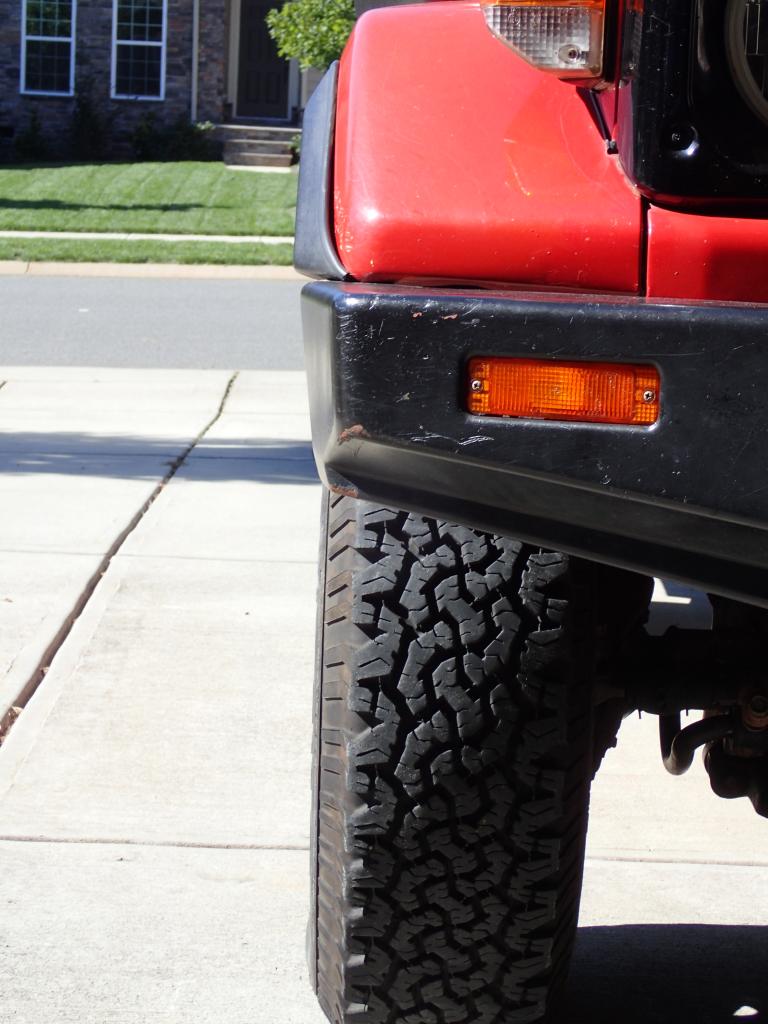 Moving to the rear, the spacer was OK, but I still removed it. 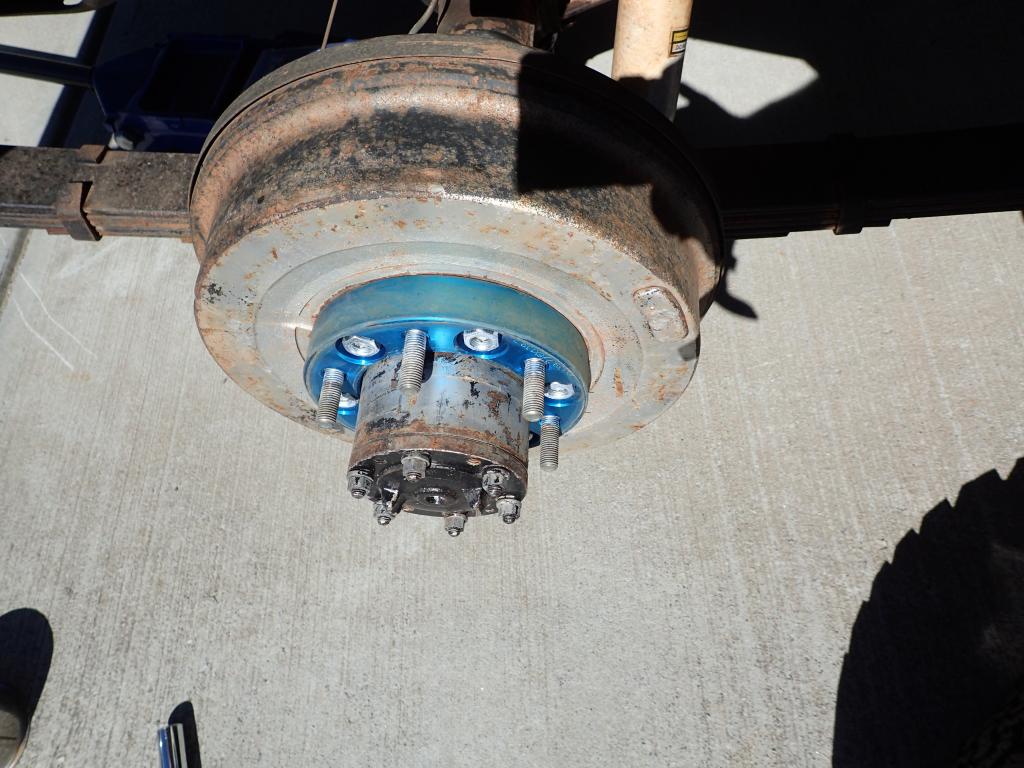 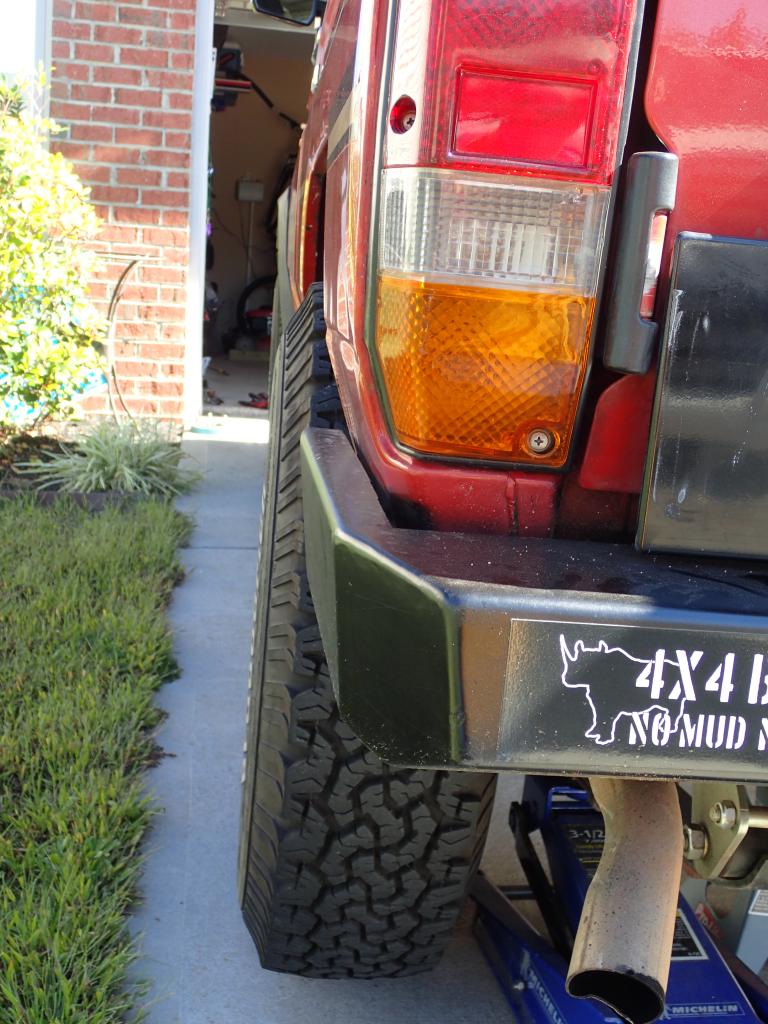 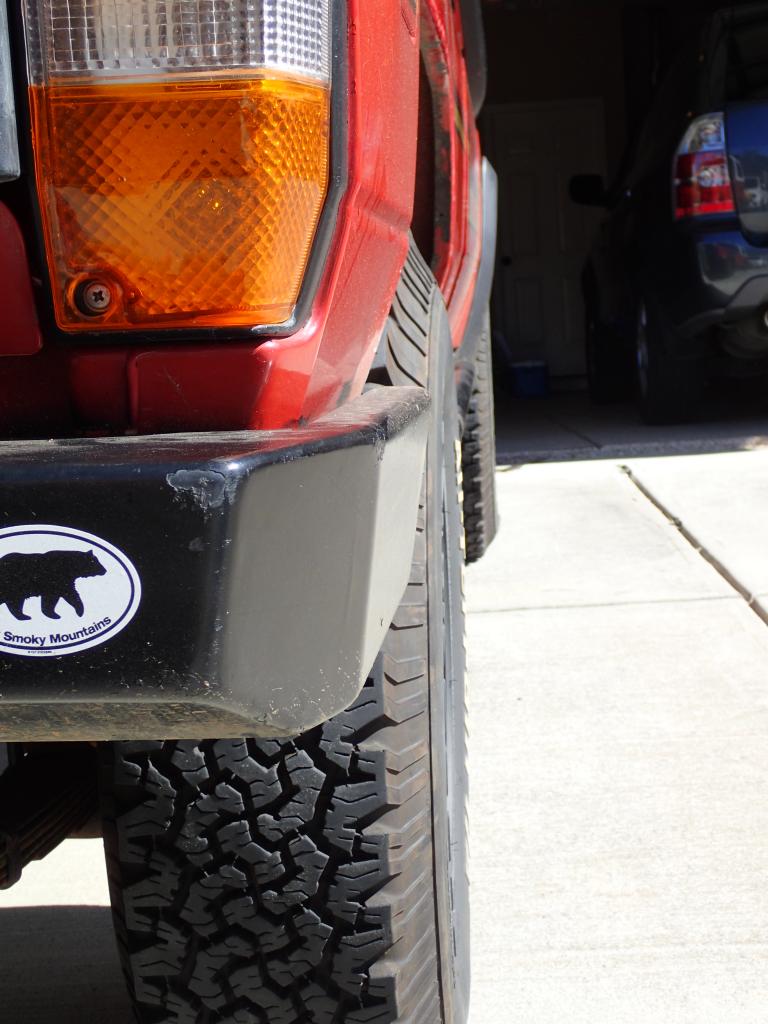 After working through the spacer and lug nut fun, I discovered one more thing to add to the list. The wheel studs are M12x1.5 which I believe are correct (though the lengths vary, so I will replace with OEM when I freshen the front and rear wheel bearings). The studs on the spare tire mount are M12x1.75

. I was able to find some M12x1.75 lug nuts that have the same hex size on them as the axles, but they are doggone hard to find. Guess, I'll be putting new studs / bolts on the tire carrier mount ...

I did not notice a minor exhaust issue until I was looking over the truck with a couple of fellow ONSC members the day after I bought it. The truck has a relatively new (probably 3-4 years old) Toyota exhaust system on it from the flex pipe back. However, when the old system was removed, the first mount downstream of the flex pipe was apparently torched off the frame. This meant that the first hanger on the entire exhaust system after the manifold was at the rear axle (just downstream of the muffler).

I am still working on a permanent solution since the frame bracket was not cut off cleanly, but with an OEM isolator ordered from @beno and the creative use of two muffler clamps and a scrap piece of 1.5" aluminum angle, I have cobbled together something that will work for a little while at least. The exhaust is now completely (if not properly) supported. 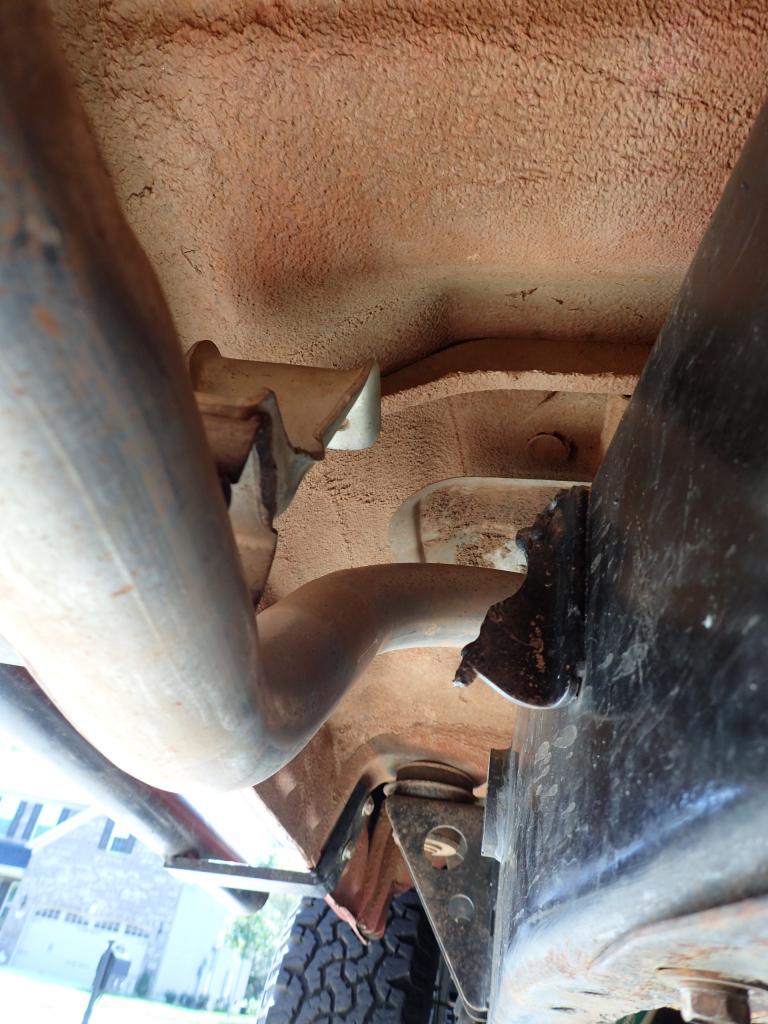 Location of Temporary Support (on the tubular crossmember) 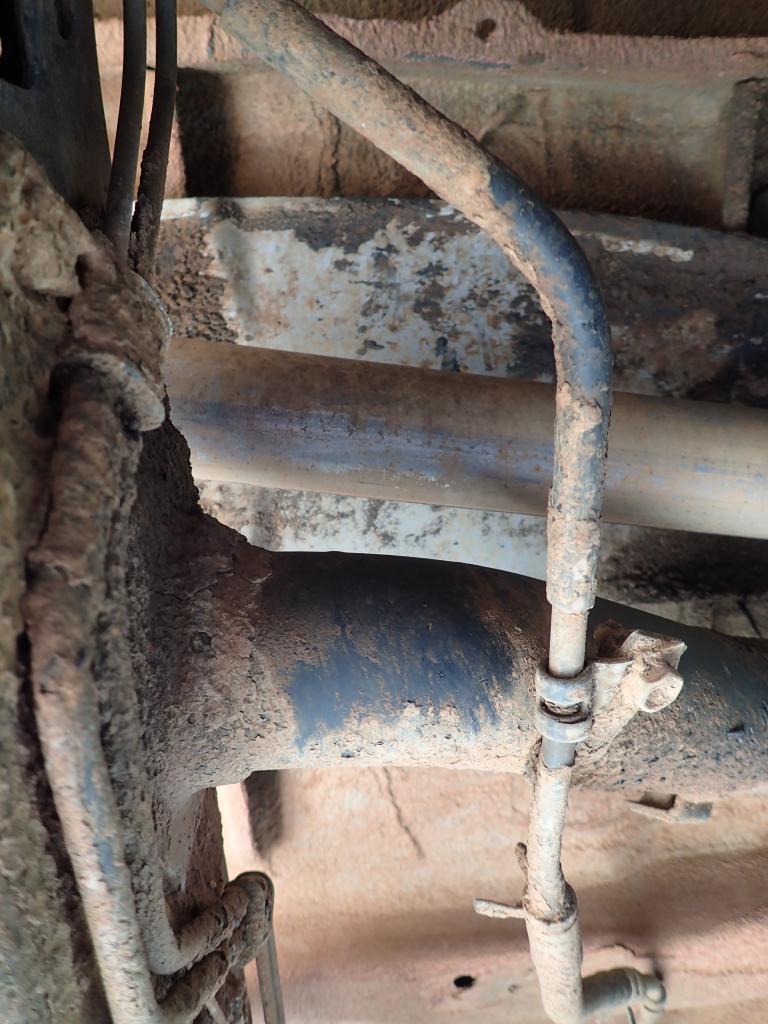 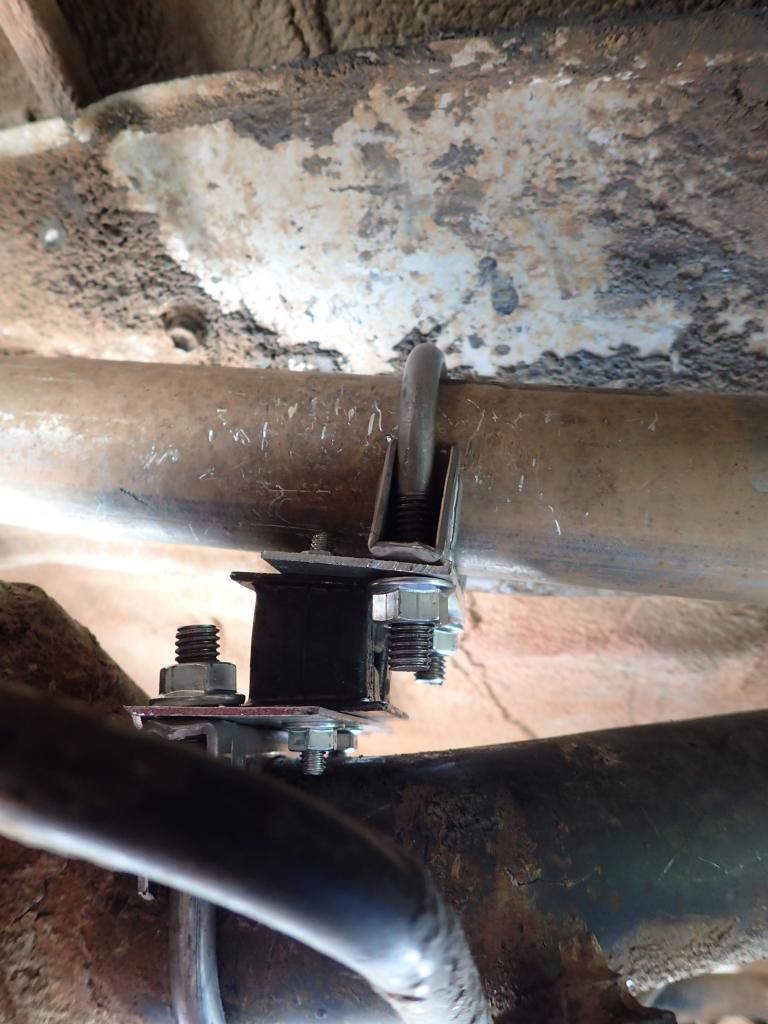 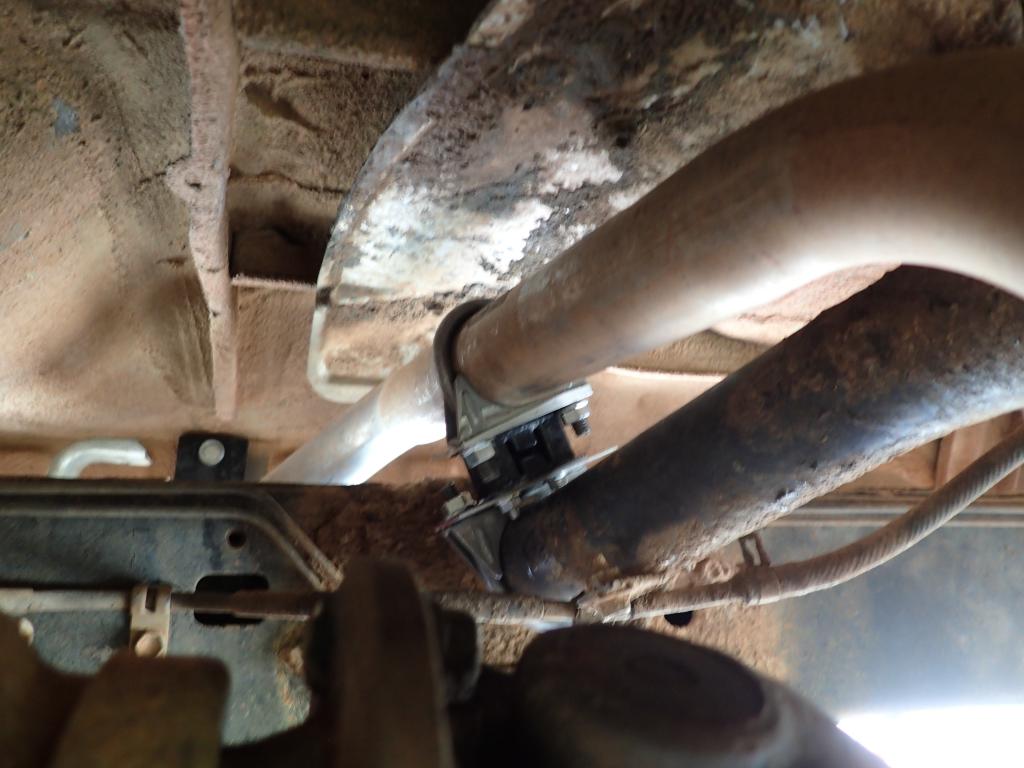 With a few things completed, the truck was ready for the reveal at the October CLT get together of ONSC.
(yes, the truck is in the picture ...) 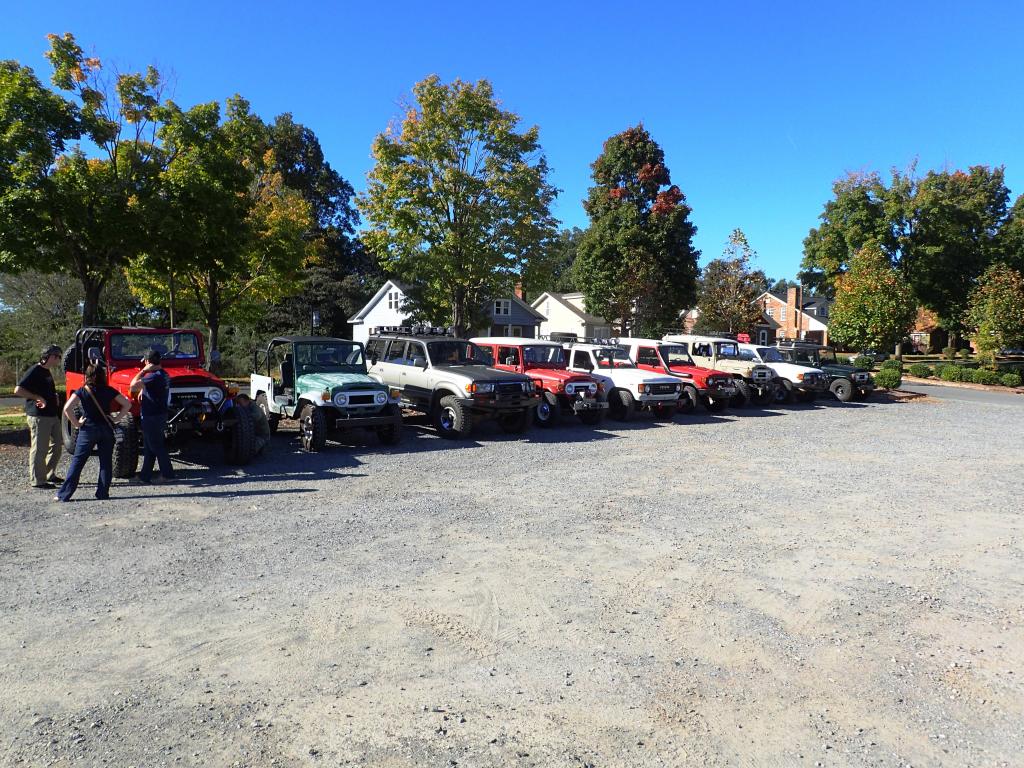 Light in the Darkness

After replacing the standard lights in both the 100 and 80 I have owned with LED versions, I found the factory dome light in the 73 woefully inadequate. I saw @1978HJ45 LED replacements in his thread and contacted him about them. He was nice enough to personally deliver a panel to me in Charlotte via Frankfurt, Germany. I can say the panel is unbelievably bright.

The pictures below are taken with my phone at nigh in my garage with the only light being the dome light. Absolutely amazing how bright that sucker is ... 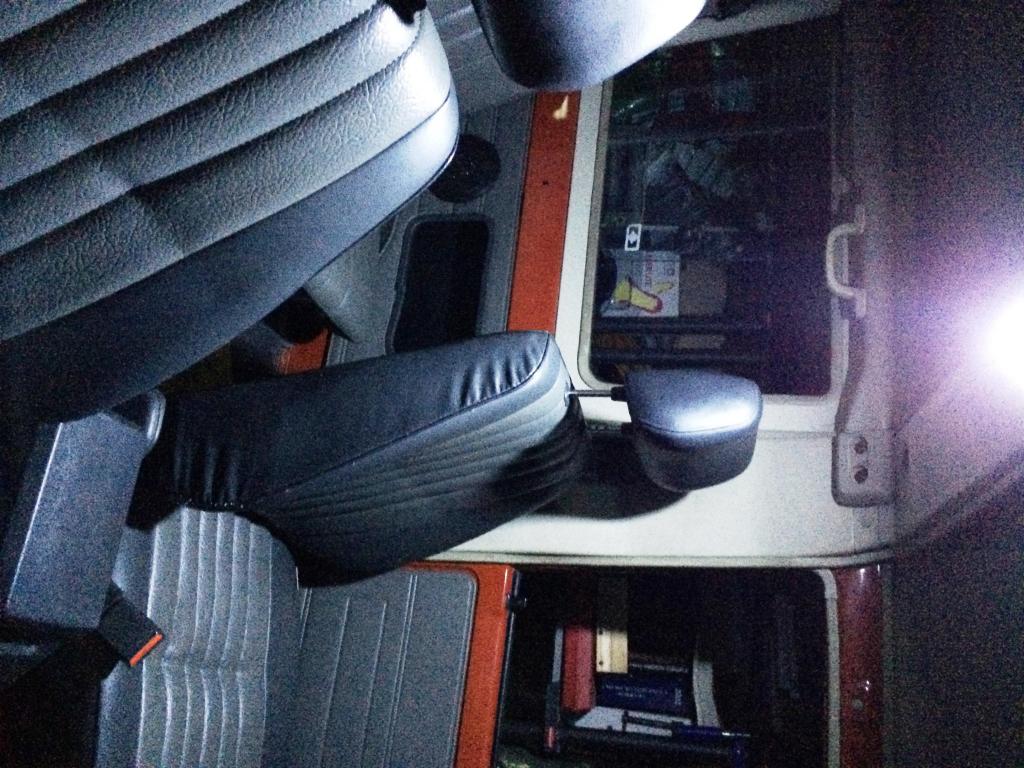 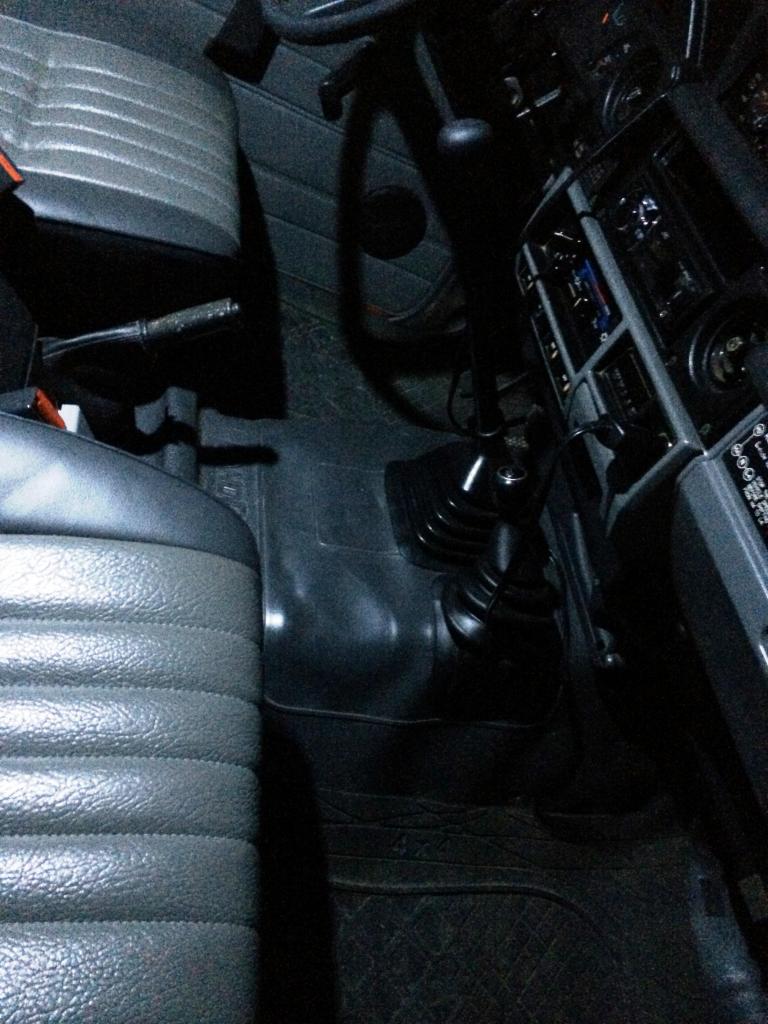 I do not know why the first image will not rotate correctly. I'll work on that later ....

Telling anyone, especially on a public forum, that you took my advice will destroy all of your credibility. 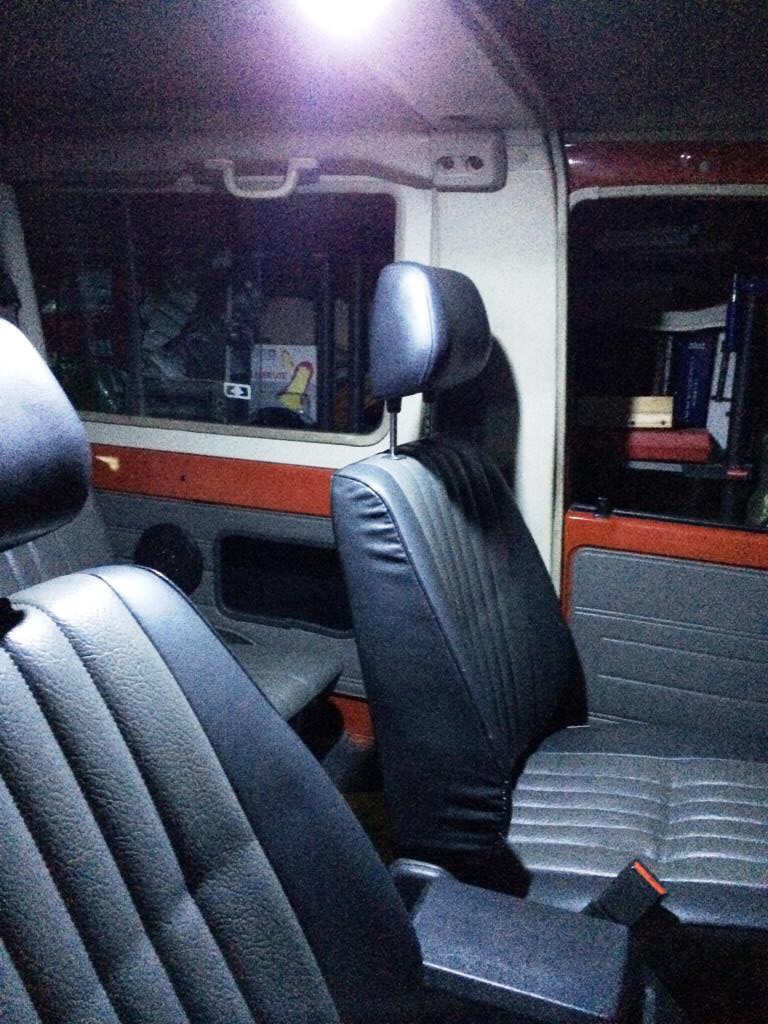 1978HJ45 said:
Telling anyone, especially on a public forum, that you took my advice will destroy all of your credibility.
Click to expand...

Sub'd. Can't wait to see where you go with this.
O

Other than the goofy steering wheel location, it's really nice.

Hey!!
Im the original owner from Spain, thats my Cañonero!!
Im very happy that another Cruiser Lover owns it!
I spent looots of hours with it!
Enjoyyyy it!! And thanks to jdmlandcruisers, they,re the boss of LHD CRUISERS!!

Hearing from the original owner ...... How cool is that?

X2 on OE post and the JDM Landcruiser guys

That is frickin AMAZING. Way past cool...

Historically when I have sold a vehicle, I would lay low for a couple of years to avoid the death threats.

Sergio40 said:
Hey!!
Im the original owner from Spain, thats my Cañonero!!
Im very happy that another Cruiser Lover owns it!
I spent looots of hours with it!
Enjoyyyy it!! And thanks to jdmlandcruisers, they,re the boss of LHD CRUISERS!!
Click to expand...


Holy freakin' cow!!!! Not in a million years would I have imagined to find the original owner posting the thread ... PM inbound. The MUD community and it's reach never ceases to amaze me. I remember the old LCML (Land Cruiser Mailing List) and never made the migration to MUD until a couple years back ... never knew what I was missing


It's is absolutely incredible ... and wayyy to cool to even imagine.

cruiserdan said:
That is frickin AMAZING. Way past cool...
Click to expand...


I mean, I've been in a boring meeting all day in Hilton Head when I'd have rather been out fishing. Trying to keep up with MUD to keep from passing out from boredom and I come back from the closing dinner to find this.

1978HJ45 said:
Historically when I have sold a vehicle, I would lay low for a couple of years to avoid the death threats.
Click to expand...