There's a 1981 long bed 4X4 SR5 for sale near me and I've wanted a solid axle mini-4X4 pickup since I missed my chance back when they came out in '79. I know '85 was the last solid axle, but how's the engine and rest of the drive train? Any bugs or things to watch out for?

Here's what I know: The odometer shows 67K miles. The For Sale sign says new Weber carb & new front and rear ring & pinions. R&P and carb boxes are on front seat. The interior and body are fair. It's got a home fabbed front bumper and bull bar. It's got practically new 32 X 10.5 X 15" tires and cast wheels. The price says $2500 Firm. I stopped and took a quick look at it but haven't called on it yet. It' got SR5 on the tailgate which still works and latches fine. Yes, I will test drive it.

Well it's not an SR5 if it's carbureted, you gotta remember that these trucks are old, and you have no idea what's changed since it left the factory. If it's nice and it's what you want buy it, I'd beat the price down a bit but that's just me. The drivetrain is standard Toyota stuff, 22R and a G52 5 speed.

The only thing I could think of right now is the timing chain guides. They're made of plastic and become brittle and break. W/O the guides the chain will eventually eat through the timing cover filling up the oil pan w/ coolant. You'll need to pop the valve cover off in order to check the guides. I prefer the EFI models over the carb ones due to better MPG and slightly more power. I converted my '86 over to EFI and that has been the best mod I've ever done.

Thanks for the tips! Let's see if I got this straight. Possible engine swap or intake mod since it's badged SR5 and carbureted. Also, timing chain guides, if original, might need replacement soon due to being plastic. And lastly carefully check the bed floor to wall seam. I seem to remember an ugly line on the outside passenger side bed panel about where the floor would connect.

I'm pretty sure there were carbed SR5's past 84, If the body is all matching, then check under the hood for the info plate on the fire wall, is should say if it was a 22R or a 22RE. $2500 is ok if it's not too beat/rusty/worn out. 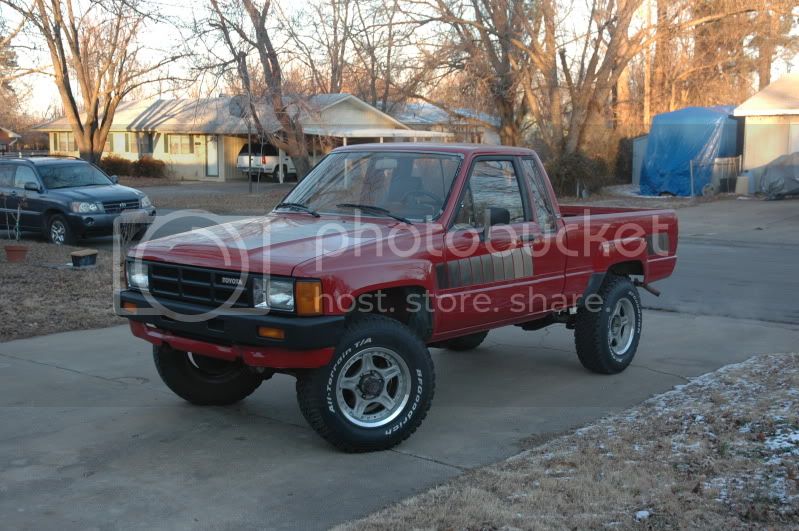 Well, I finally called the guy after getting permission from

(very necessary). I'll get a chance to start it up and drive it tomorrow. Found out that the truck is actually an '81 with an '85 engine, tranny, and xfer case. The R/Ps are not installed yet but will be included. The carb is installed, but not fully dialed in yet. The front drive line is disco'd 'cause it came loose on the original engine & tranny and wreaked havoc. That's one of the main reasons they were replaced. Been pretty wet here lately and in my 1st quick look, I didn't crawl under to notice such things. It's been a project truck and the guy just hasn't had the time to work on it. I should have noticed the body style difference between '81 & '85, but was focused on other things. Thanks for posting the pic, Jerod. That's the grill I remember. I had a wheeling buddy back in the late 80's that had an '85. I asked the owner why he was replacing the R/Ps. There was a previous owner before him & he wasn't sure the one's in the truck were matched and he felt that possibly a failure inside the front third member might have caused the drive line problem. He sounds like he's at least somewhat knowledgeable with Toyotas and that's rare where I live.

Ah, gotcha.... Well with the new info I'd say $2500 is a bit high... What gears are the new R&Ps? If they are stock then tell the guy he can keep them... Stock diffs are a dime a dozen. And he's not even sure if there's a problem.... Dont' be blinded by the prospect of getting a new truck if the price isn't right.

Thanks for the advice, Jerod! The new R/Ps are stock gear ratio. I looked up blue book prices for both '85 and '81. He's even high if it was an '85 in average shape. It needs some work to be average. I think he's thinking the new tires and wheels will dazzle a buyer. I'll see how it runs and take a closer look. Tell you more after that.

Where did you go to find blue book values going back that far?
TornadoAlleyCruisers
TLCA President Emeritus

Chef said:
Where did you go to find blue book values going back that far?
Click to expand...

Also, I have bought and sold more than a dozen 1st and 2nd gen trucks/4runners..dude is way high..

Whats scrapmetal worth these days? thats what stock ratio ring and pinions are worth !

Weber carbs suck, bad so your gonna have to pay extra to get a factory carb reinstalled.

if the body and frame are suuuper clean it might be worth 2000 in my opinion.

Thanks for the advice and comments! I took a closer look at the rig and a short test drive. The owner mentioned that he had some projects going on this rig on the phone last night. Yeah, the whole truck is a project. Windshield has a few "spiderweb" cracks, no front drive shaft - lost or thrown away. Dash board and some instrument panel mounts for radio & heater controls tweaked and need straightening. The radio head and heater controls are out and hanging by the cables. Door panels need replacing or patching old speaker holes. Speedometer cable needs to be hooked up. The bed has some serious rust spots. The seats (bucket) need recovering. The front parking signals are sitting on the bumper, hanging by the wires and need to be attached. The battery is held down by a bungee cord. The license tags expired last year. And these are just the glaringly obvious areas.

The good points are short and sweet. It has a nice bed mounted tool box and the engine runs fairly well, although the idle needs adjusting. It starts great and the high speed idle is working fine. The new R&P gears are 4.56. Don't know if that is stock or not, seems high - for larger tires, but might keep those if I can get the price down. Well I forgot to bring a camera, but took some pics with my cell phone. The 100 gallon tank in the back is not part of the deal - it's been sold separately. Will get some better pics if I decide to pursue this project. 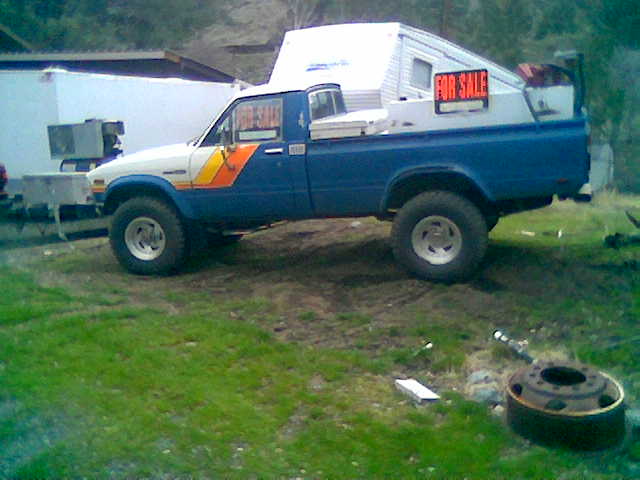 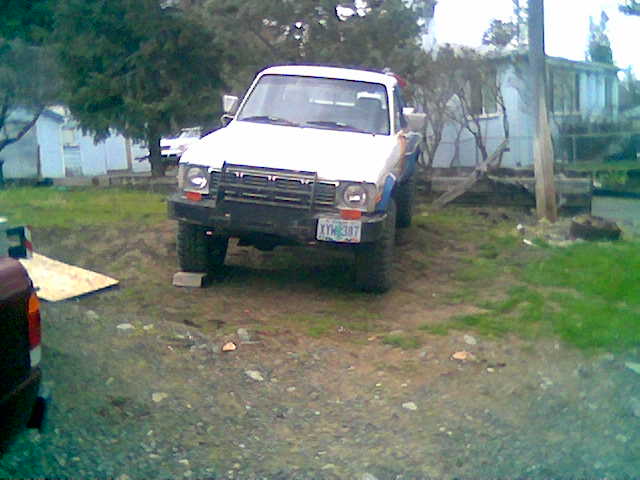 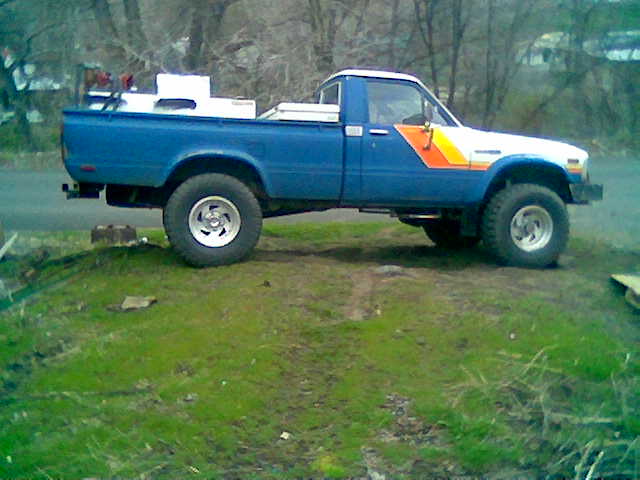 Bed rust is practically original equipment on these rigs as is frame rust, which is the far more important issue. From what I can see, it's a project rig and way overpriced.

For future reference, be sure to take a pick or sharp screwdriver and stab that frame good by the fixed end of the rear spring hangers on the inside of the frame. Poke all along the frame between the spring hangers under the cab. Don't be bashful. You need to know if you have frame rust. Everything else pales. Unless you know how to fab and weld, or know someone who does, pass.

Stock R&P for 1981 is 3.90:1 (only year for that ratio IIRC). 4.56s are good for 31s, a little more if you don't mind slightly doggy performance. 81 is the first year for the 22R, strong motor, the least of your worries. Assume the chain/guides/tensioner must be replaced (just did my 88's, it's good to baseline a 22R/RE motor that's new to you). The L series trans that is likely still in the rig (unless you can verify it was swapped) is a weak player. I had an 81 back in the day and to be honest, it was the worst of the 10 or so Toy minitrucks that I've owned (including the 80 with 20R that preceded it, one of the best rigs I've ever owned).

84/85 has better trans, possible EFI (rare, but they're out there), PS is fairly common, front axle housing has longer/stronger gusset, a few other minor upgrades too. Downside is known piston slap in the 84/85s along with single row timing chain, but these hold up well enough. Just eyeball the chain when you do your valve adjustments or annually.

The 79 to 83 rigs have bigger wheelwells and a certain vintage cool that the later rigs can't match. But you need a clean example or a burning desire to rebuild a project like that ... Just my $0.02, FWIW. GL!
99 T4R elocked DD; 88 PU SAS candidate; 81 FJ40 stolen, recovered, resurrected ... ya can't make this stuff up 81 FJ40 project southern New Jersey

Thanks, GL, for the info & advice. I stopped by for another visit. The frame appears to be sound. Some surface rust, but solid in the places you suggested. Took some more pics with a camera this time.


Knuckle seals look a little weepy. Front axle looks like it needs some work. So does the interior, for that matter. I think the concensus from inputs is that $2500 is a bit high for this project rig. My research agrees. I think next, I'll see if I can bring it to my house and give it a good going over. Wheel bearings and inspect the underside. I live down the street from the owner and my driveway's concrete and right now the rig is parked in a dirt lot which is mostly mud with the weather, making it difficult to check it out. The rig has been doing a lot of sitting around, so the new tires aren't showing any deeper problems that might exist.
Tom - KJ7KGG -
'94 FZJ80 / list of mods --Three Feathers 'Trail Head' off road trailer
2017 CVT Util trailer - Sold 5-16-2020; CVT Mt Baker RTT - Sold 5-1-2020
'81 Mini 4x4 long bed - Trail rig & Build - Sold 4-15-2020
'09 BMW X5 E70 xDrive48i heated leather seat decadence

You'll hate that Weber carb in the winter time. The one in my '86 didn't want to run right 'til the engine was warmed up. I was glad to see it go when I did the EFI conversion. I'd pass if it were me.

I am pretty sure that paint is factory if someone hasn't pointed it out already, BUT it still isn't a $2500 first gen in the condition you're saying it's in. Offer him $1k and see what happens. I have a stock carb and intake off of an 83 that will work if you need it cheap. If he bites, buy it and dump the weber on ebay. You will probably get a few bucks for it. They do work good when dialed in correctly (which can be a challange in itself), but if you are not a carb guru they can make you lose your job.
Project Sparkle Wrench
You must log in or register to reply here.