Not mine - planning to look at it tomorrow as a project for my teen and (maybe?) electric conversion. Seller was originally planning on a frame-up restoration and wrap for a local ski shop but ran out of time.

Anyone see warning signs or things to look for here? Is the price reasonable if the body and body mounts are in good condition? What about the GM Inline 6 - would that detract significantly in anyone's opinion? 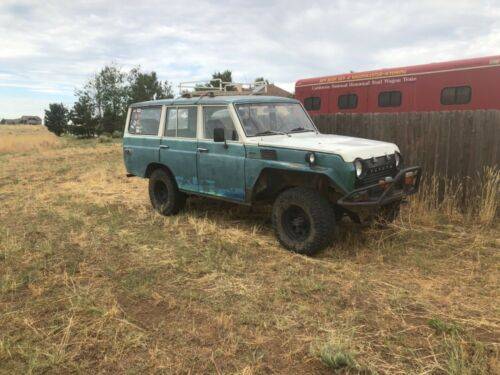 1975 Toyota FJ 55 in great running condition. Ready for the mountains. 4x4 works great. It has a Chevy 250 inline 6 which is the essentially same engine that it came with since Toyota used the design
boulder.craigslist.org 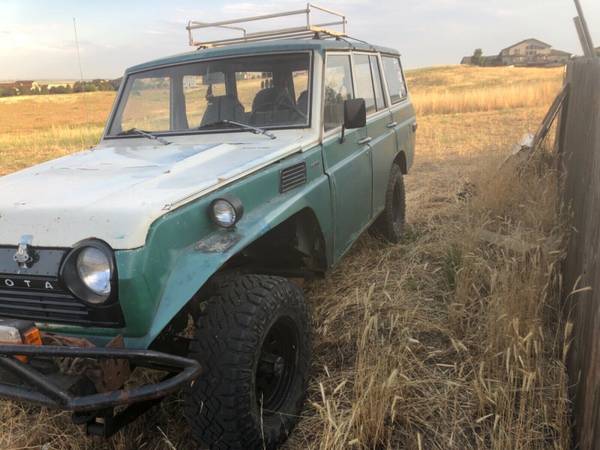 Update Sat 9/7 -- Checked out the truck. It came to Longmont from Greeley CO where the prior owner had it for many years. Seller has fixed up the electrical and lighting systems so that's functional.

It looks like the fenders have been sliced off front and back where typical rust happens, leaving some pretty large gaps. Below the doors, the rocker panel was sliced off and replaced with heavy duty rectangular tubing with arms welded to the frame to act as sliders - seemed like a strong install. Body mounts looked good except for the back ones under the tailgate. Other body panels have some sections that have been riveted/screwed in with replacement sheet metal.

Seller has an additional tailgate and rear glass parts available but the truck currently has a plexiglass hinged window in place with cute little padlocks - looks very homemade but probably did a decent job keeping out the critters and weather but did not make for a functional tailgate.

Engine and engine bay are pretty clean - seller was happy with the power steering that was added and front disc brakes looked like they were in good condition. Suspension looks good and the truck has an extra set of leaf springs inside.

All in all, it's about 75% intact but a full restore would need to find a source for the mod'd body panels. Would probably make someone a good project, but a bigger project than I can take on with the kiddo right now. There were several other interested parties and seller indicated an offer for $6k that was too low for him. Seems like he was holding out for between 6.5-7k.
Last edited: Sep 7, 2019

I like the Chevy 250. I wonder if it is easier maintaining one of these or a 2F, parts-wise?

The truck has its challenges. I wonder about the integrity of the frame after they melted the sliders into it. Aside from that, the lights on it are a bit lacking for road worthy-ness. Classic Cruisers is in your neighborhood, they might get you to a full-restore point, body-wise.
J

Ha - that's my rig - was so happy to find it in my own hometown. I had always wanted an fj55. I still look for the for sale 55's just to see what's out there - and ran into this post. I probably was the 6k offer - although it was me who backed out after seeing it. Almost did take it for 6k - but luckily held out and got it for much less - although probably still too high. Seems like they were trying to flip it - I was actually able to get ahold of the original owner who was still on the title and who had found it in a corral and done all the work. So far - I'm happy - runs real good - I drive it all over town every weekend - although all the custom work on it does scare me if anything happens to break down. Haven't done much with it yet - cleaned up the inside some - still need to redo the floor. Refurb'ed the back bumper and am hoping to do the front this weekend. Then in the spring - sand and paint. I also actually reached out to classic cruisers who came back with a reasonable quote to throw a 2f back in there - but now I'm leaning towards riding this engine til it dies - runs strong now - but again - all the custom stuff scares me some - definitely doesn't seem like it will be as easy to work on as my 95 Bronco was. Haven't taken it on any trails yet because I'm a little nervous - but original owner says it's a beast offroad. (Can't believe I remembered my old login from 2011 when I had a 95 fzj80 - man - I miss that thing - was a toss up between another one of those (and being a reasonable human) and this (and being a foolish, but way content nut)).
Last edited: Nov 15, 2019

Congrats on the new piglet!
You must log in or register to reply here.