My 1972 FJ40 was plagued with a one year of manufacturing of the fuel filter and fuel line on the non-pressure side of the fuel pump. It takes a coupled connection. I cannot find any Toyota fuel lines with the coupled thread fitting. Fuel filter "out" (23030-24011) threaded connects to fuel line coupling which connects via coupling to the fuel pump. Does anybody know where I can get a Toyota OEM Fuel Line for this configuration? Mine has not failed yet but feels brittle and will replace. Don't need a fire to occur.

Anticipating that the answer to this is "NO" my work around was to purchase a later model fuel filter (23030-60030) with a barbed end which will match up with my "NEW" fuel pump with a "barb" intake fitting. A 1972 fuel pump or rebuild kit could not be found. So, this is what I have got.

However, the NEW fuel pump (for 1974 and newer, part No. 23100-61011) has a wider bolt housing. The to the old fuel pump bolts are M8x20mm (1.25 pitch). The wider housing requires a longer bolt (needs a 10 mm extension M8x30mm 1.25 pitch). I attempted to get longer bolts from Toyota (90080-11251) for a later model FJ40 but they came in as the shorter ones I already had (M8x20 1.25 pitch). See pics of bolts in fuel pump housing and beside each other, OLD and NEW. I was able to pick up bolts at a local hardware store that will fit but they are not Toyota OEM. Anybody know where I can get Toyota replacements as they are "discontinued" from Toyota.

Also looking for a rebuild kit for my old fuel pump as a spare. Seems to be difficult to find as well.

So, probably will have to "give" on being a purist and purchase fuel line. Where can this be bet found to fit the "barbs" on the fuel filter and the intake of the fuel filter? 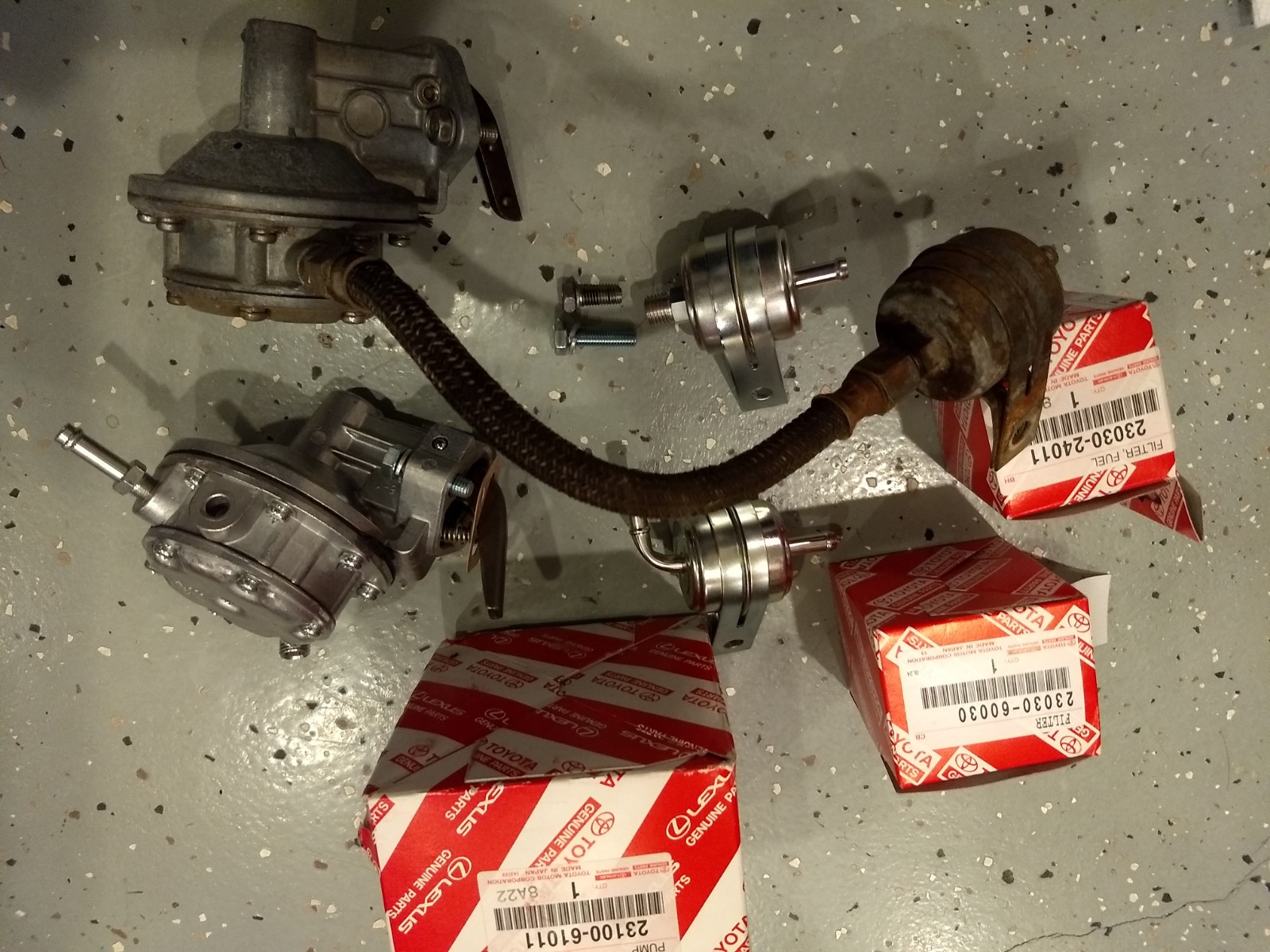 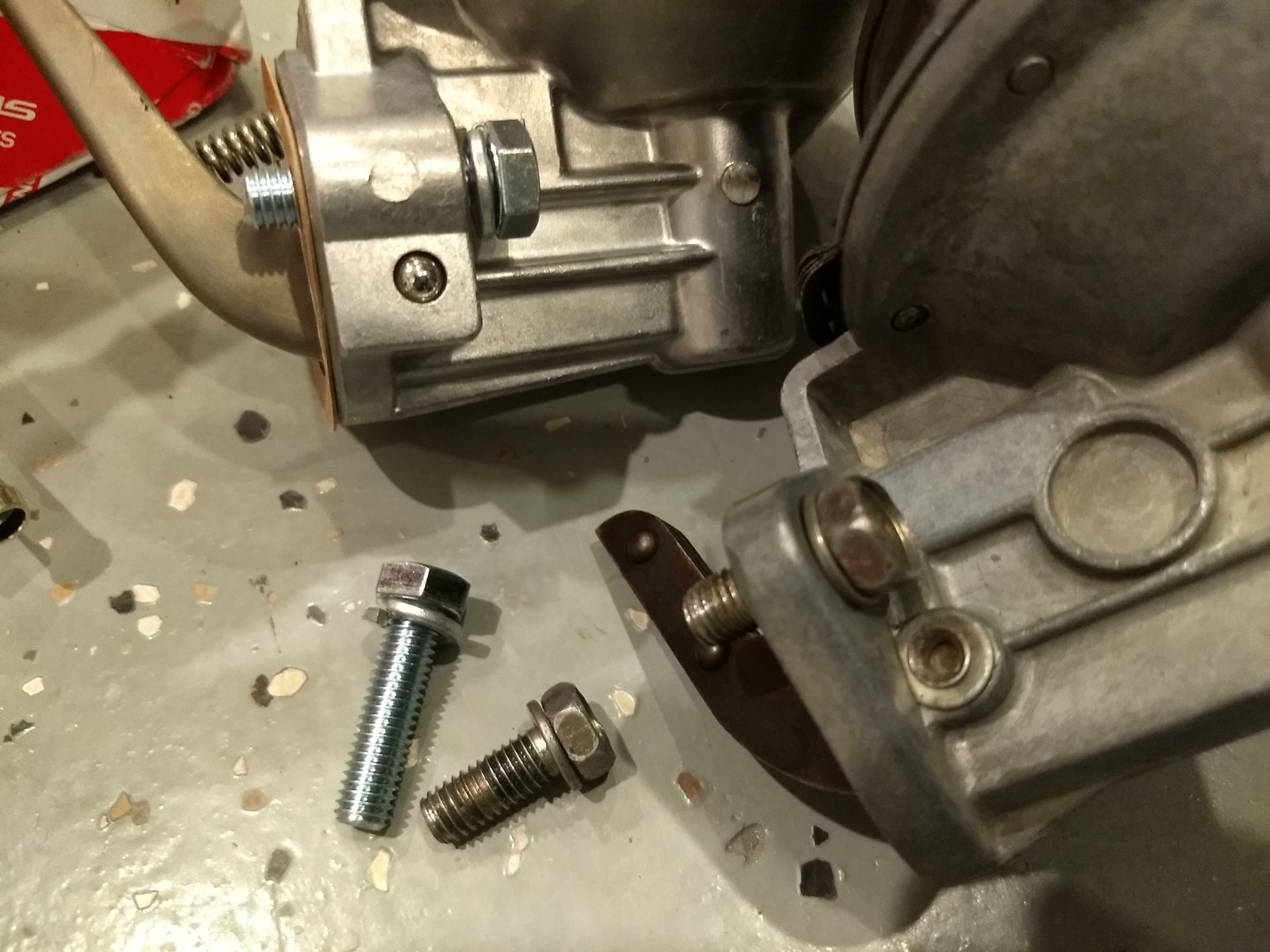 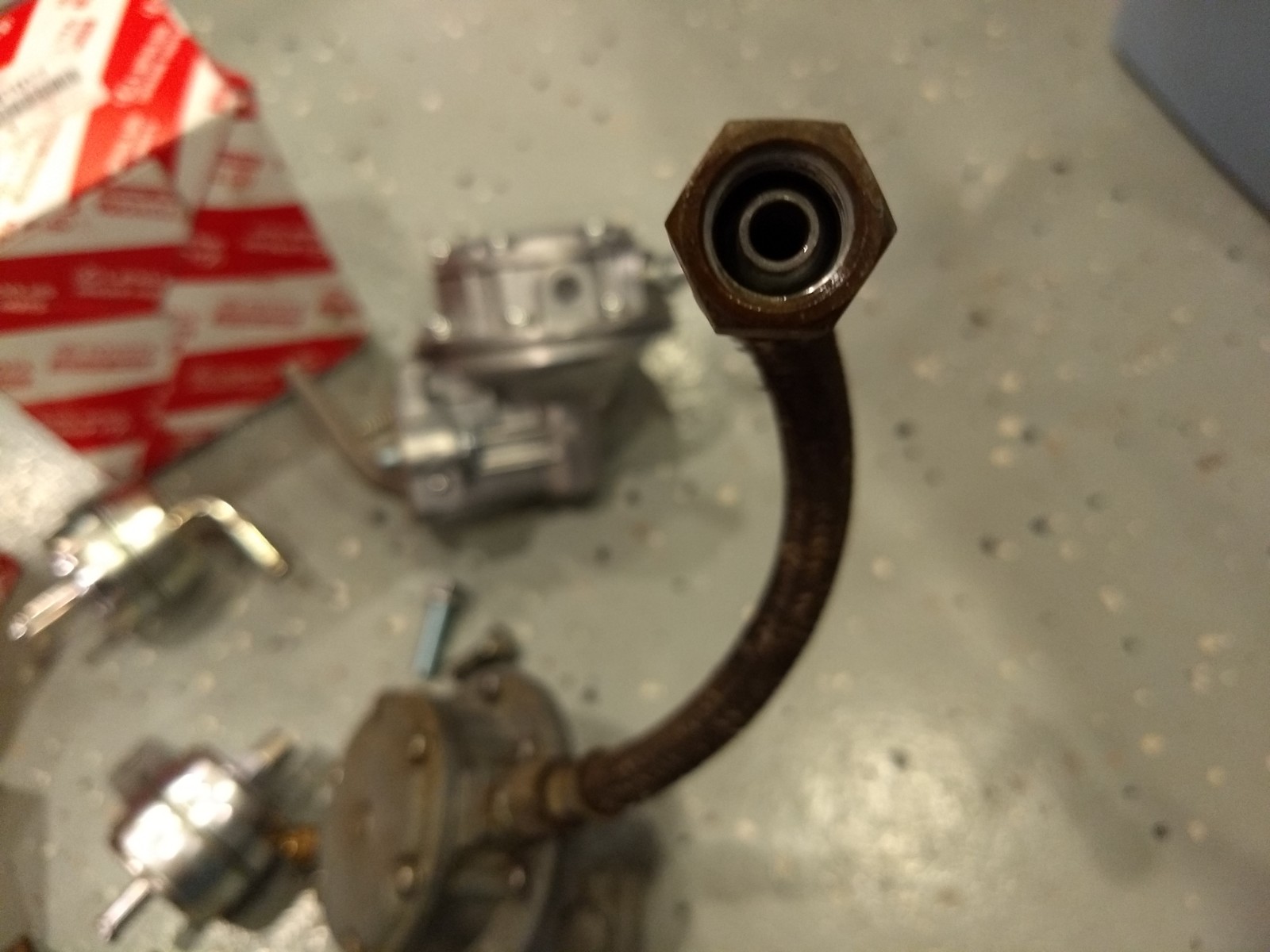 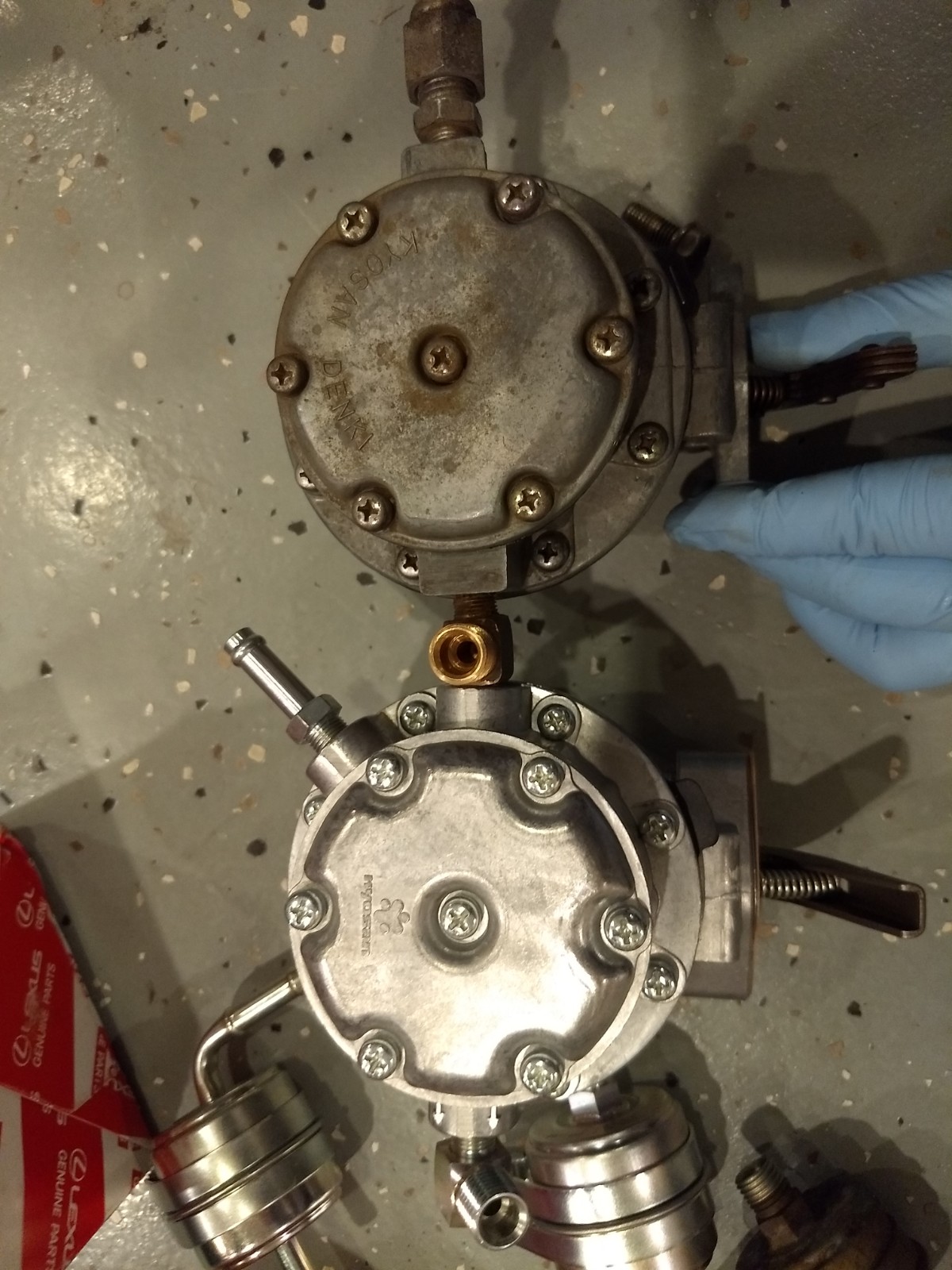 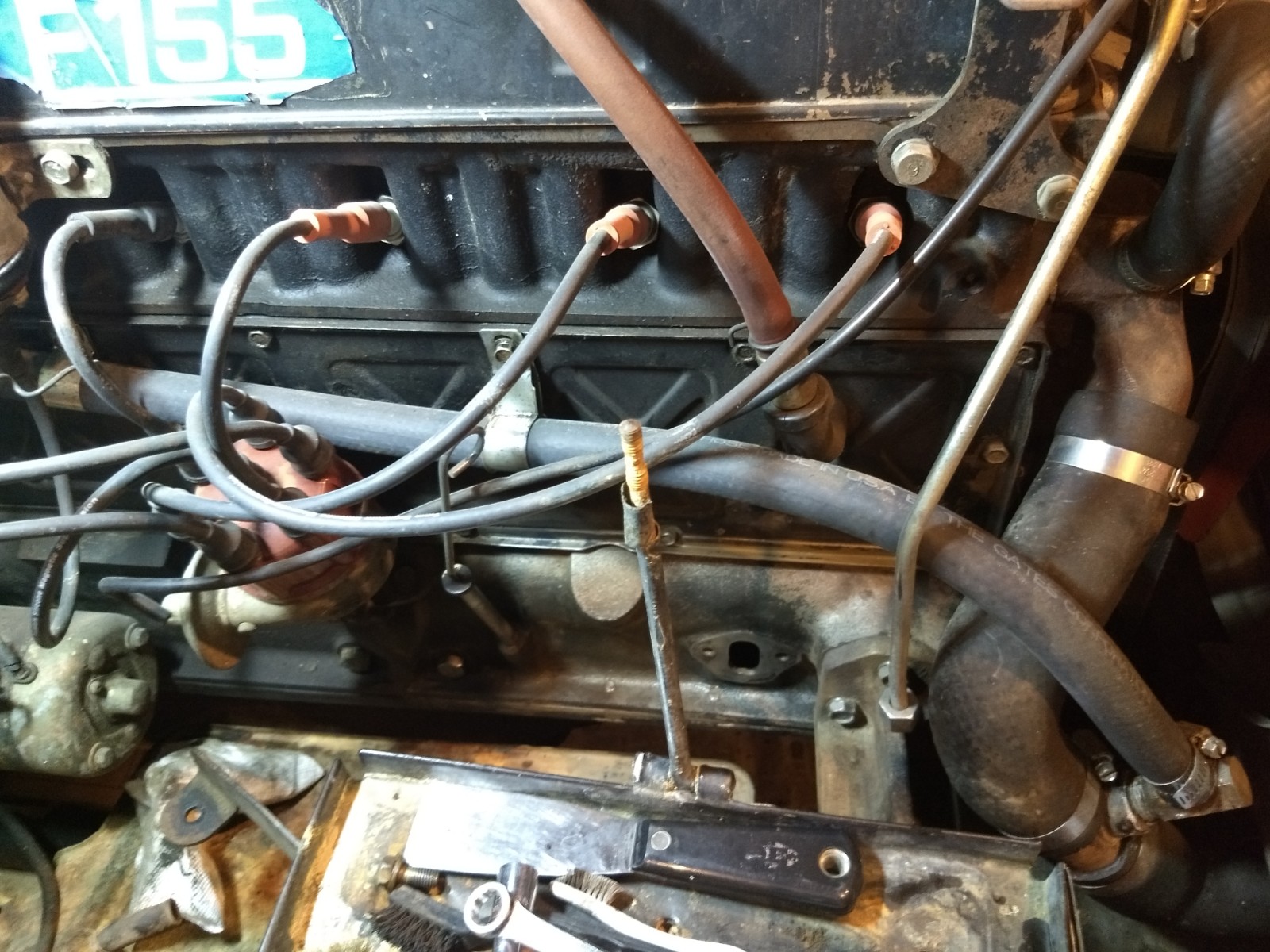 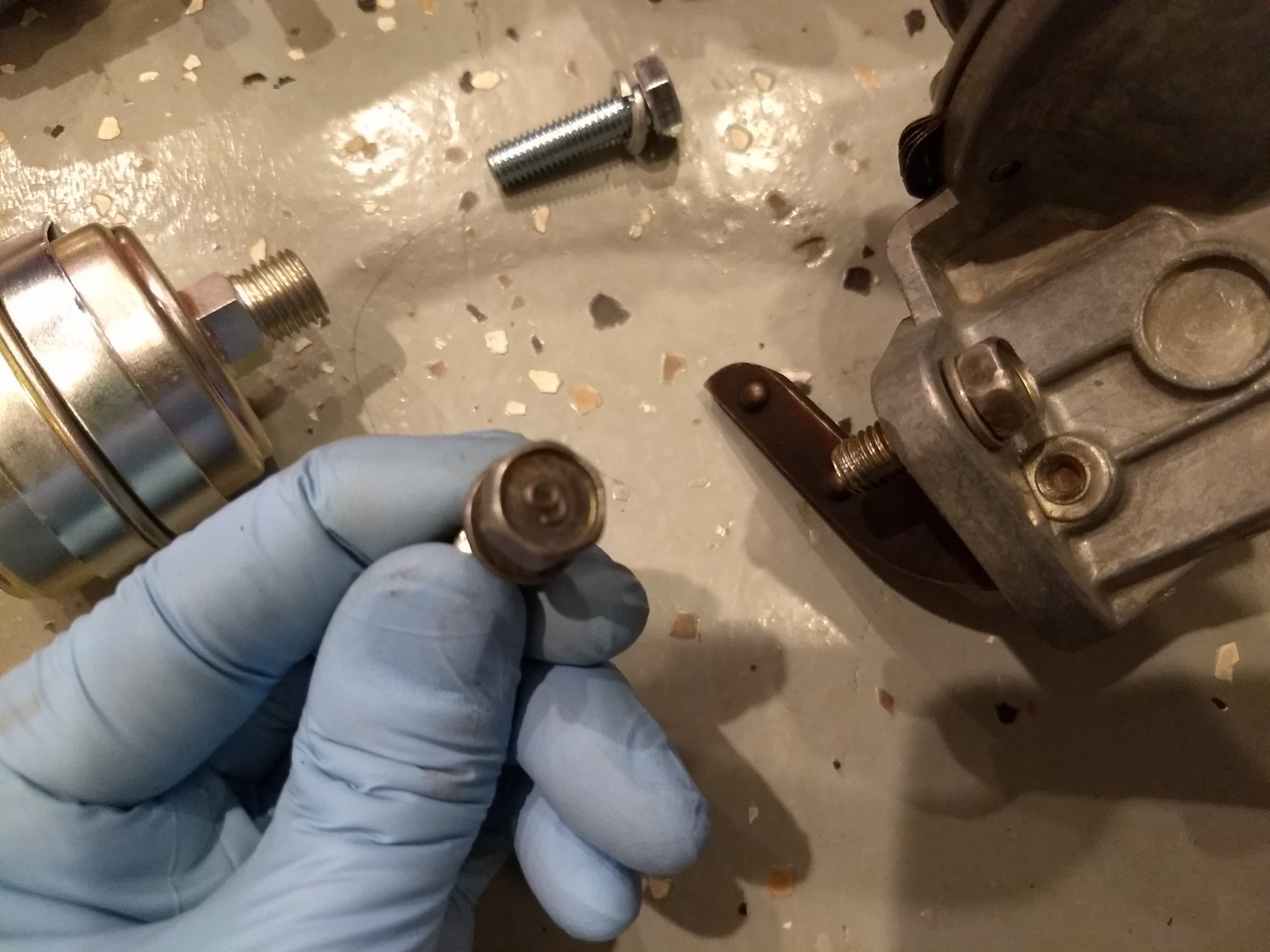 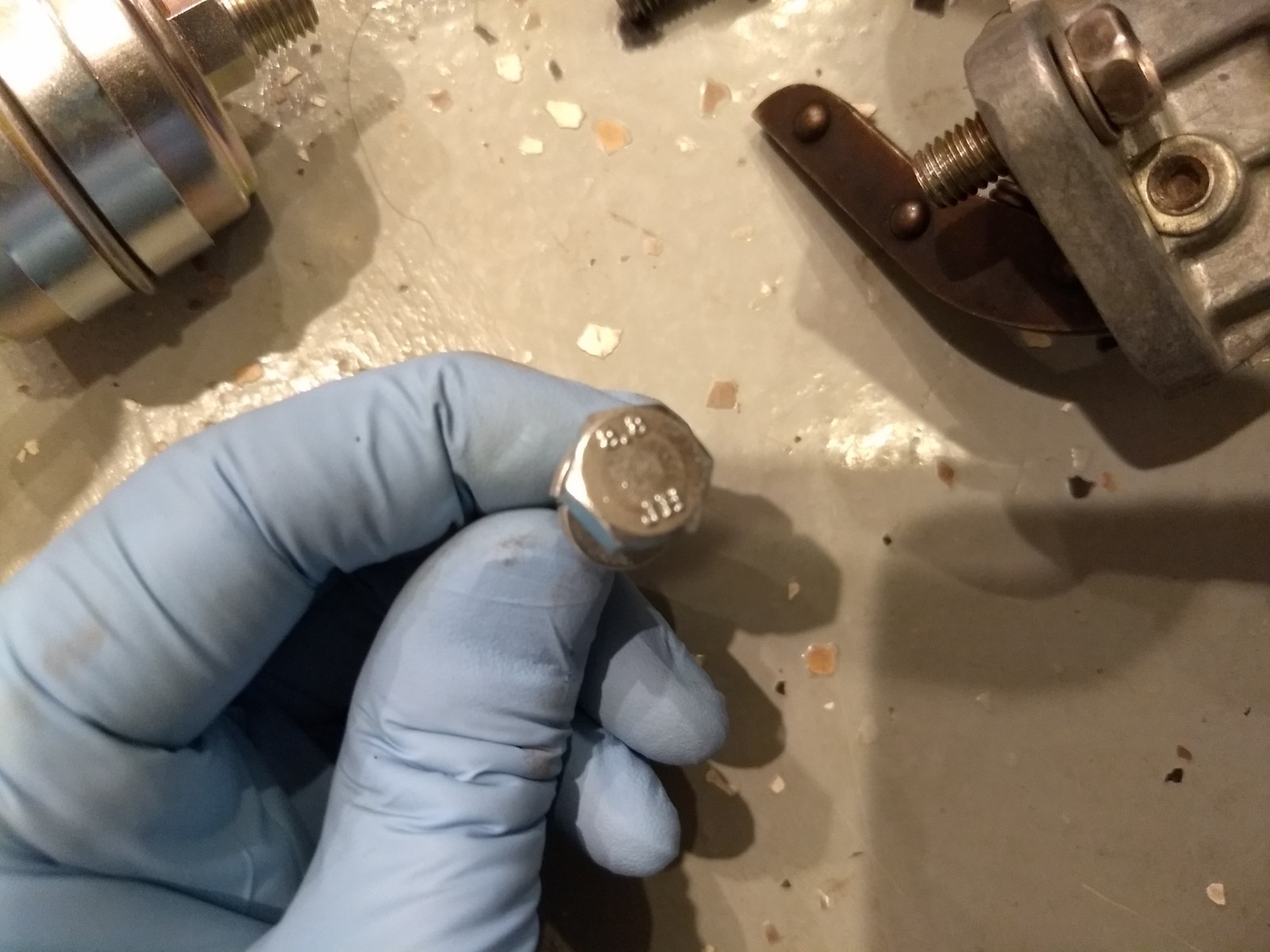 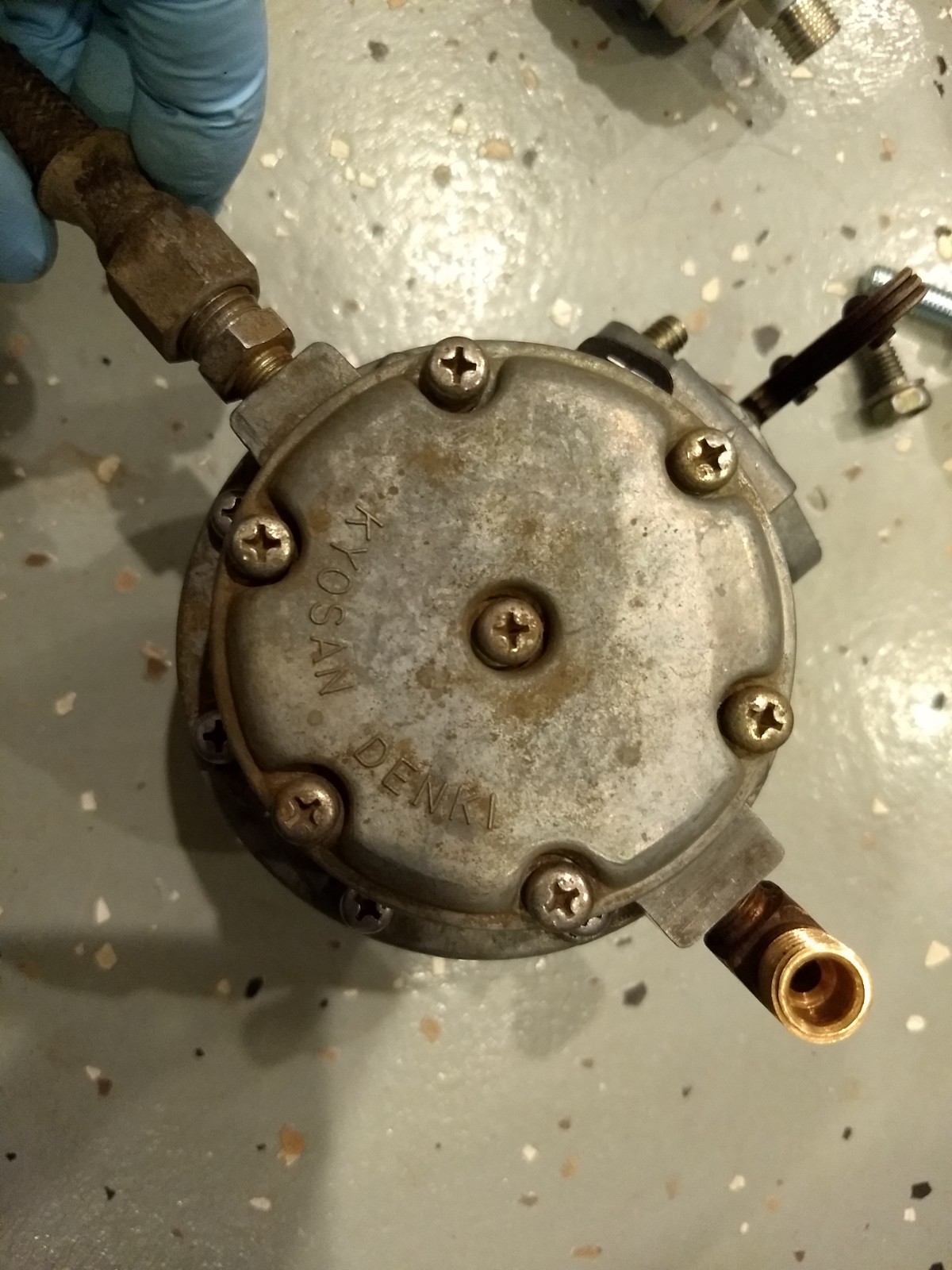 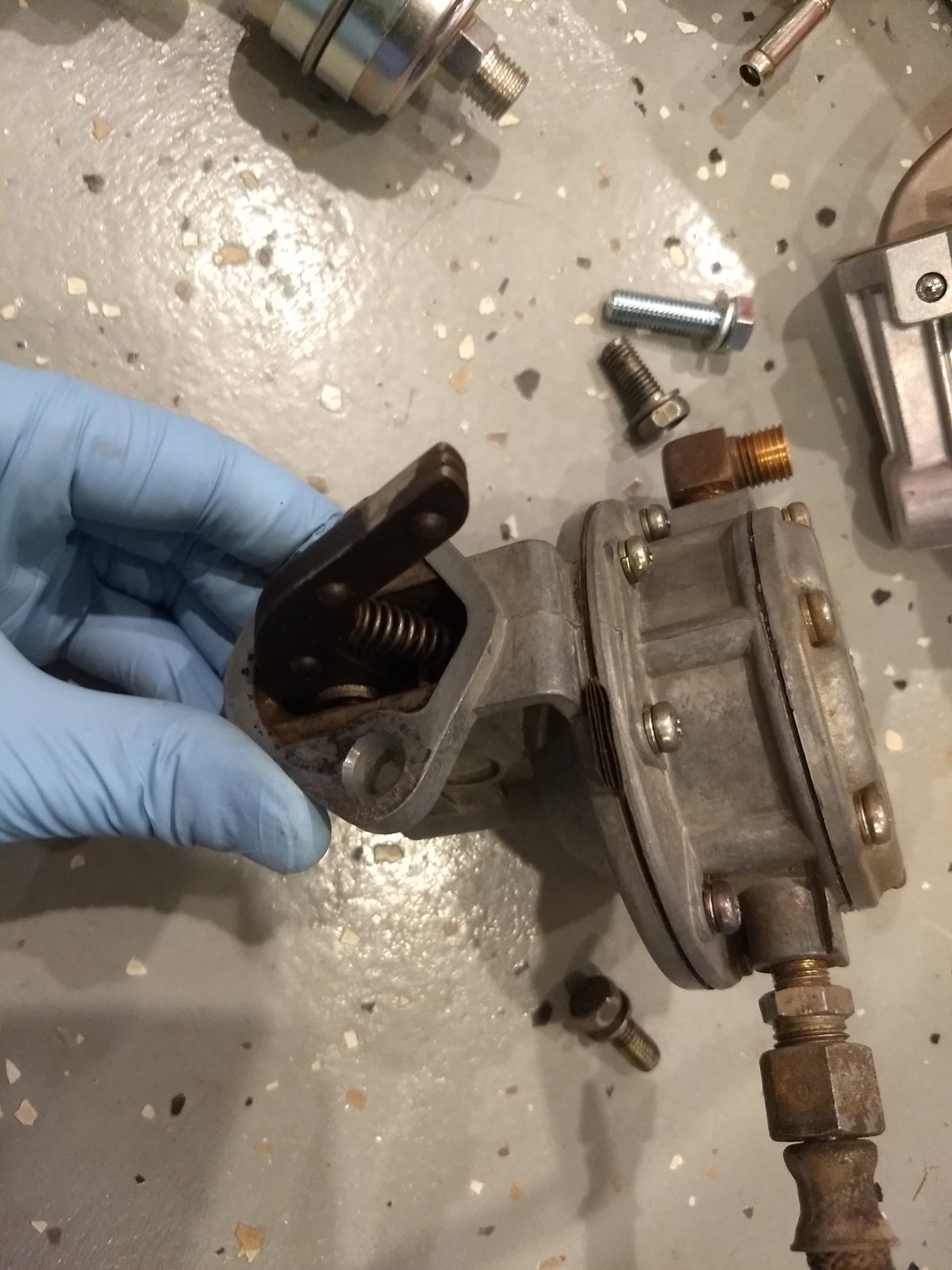 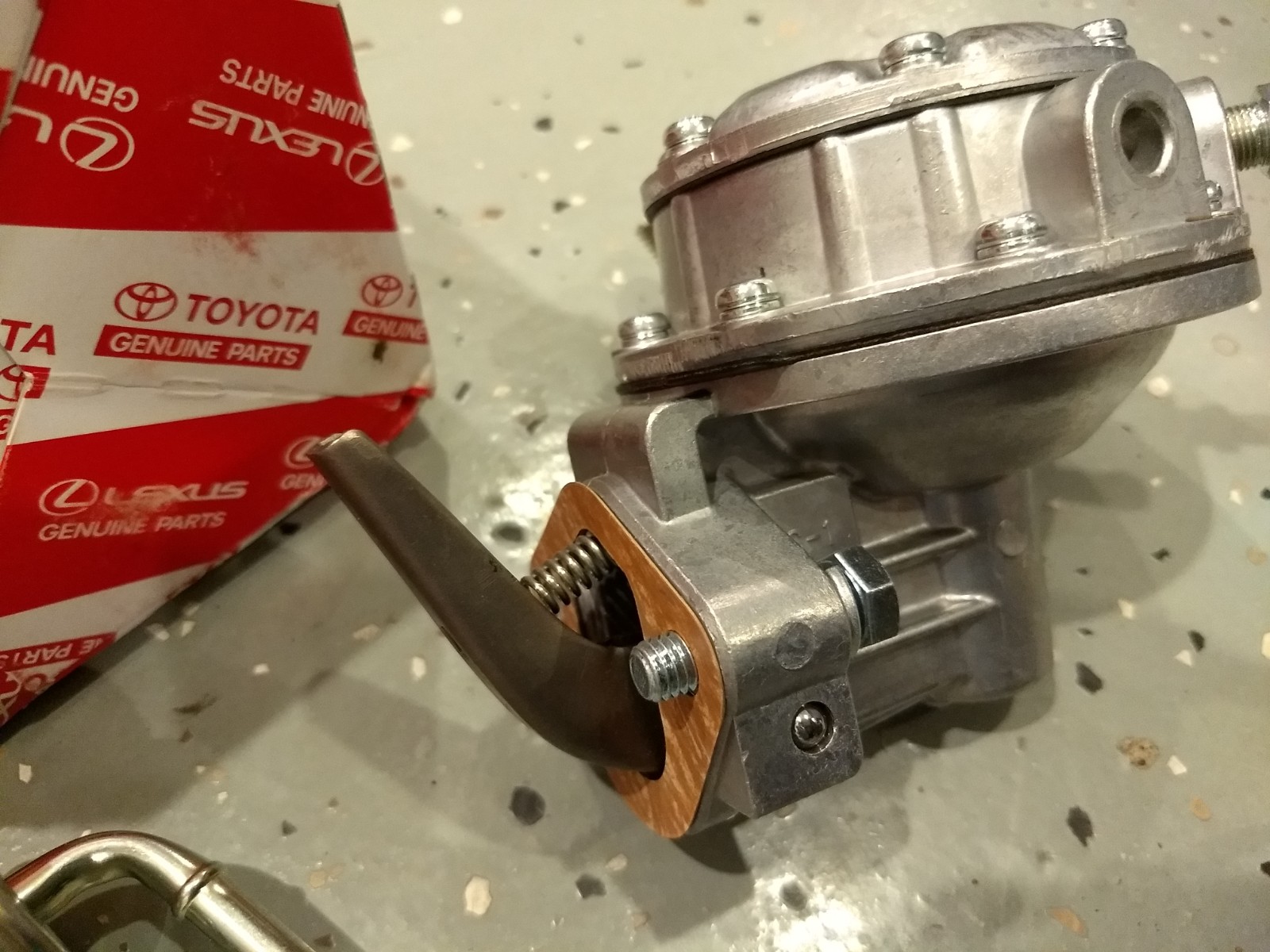 Thanks for the part number for the Fuel Pump bolts. Will get them ordered. Regarding the fuel line, I may cut off the fittings on the old line and replace the deteriorated fuel line and attach with hose clamps. Will have another post on the Old Fuel Pump as I took it apart. Can't find a Youtube "how to rebuild" for it as can find a Toyota diaphragm but unsure how to release the diaphragm "T" stem from the metal collar and rubber lower seal.
You must log in or register to reply here.