I‘m about to do my inaugural run into the hills with 800+ lbs of protein tubs for the grass munchers, they’re getting antsy. I’ve done a number of salt block and fence building runs already this summer. Mostly skookum. But on the last run, not so much. I have a routine that when I get back to the shop I blow out the rig’s underside and radiator with pressurized air because of the buildup of weeds, grass, junk that accumulates. I noticed on this last trip in/out that my coolant overflow was completely full and overflowing. The temp gauge was just above the middle line. IR temp of the thermo & water pump housing showed around 185-deg. So no obvious overheating. The next morning, none of the overflow coolant had migrated back into the block, which it usually does.

So I drained and flushed the block/radiator, filled with Evaporust and let sit for two days. Drained the Evaporust (it was colored as expected for this old iron block) and flushed the system extensively. Pulled the thermostat and boiled it, it opened at ~180-deg as spec’d. Put it all back together, filled with 50/50 coolant and fully burped it. Started it, ran it for a bit, temp gauge got to about 1/4, and the overflow bottle filled up again and started overflowing. IR temp of thermostat housing was ~110-deg, top of radiator was ~100-deg, water pump housing and lower radiator hose were ~185-deg. Overflow coolant was still cool to the touch. I’m guessing the thermostat hadn’t opened yet based on these temps.

So what’s up? Is the radiator cap defunct? It was the one that came with the OEM radiator which is as new as this rebuild. Given the relatively cool radiator top as well as the low temp gauge reading I guess the cap‘s pressure release is due to something other than increased temp (P*V = rho*R*T kind of thing)?? 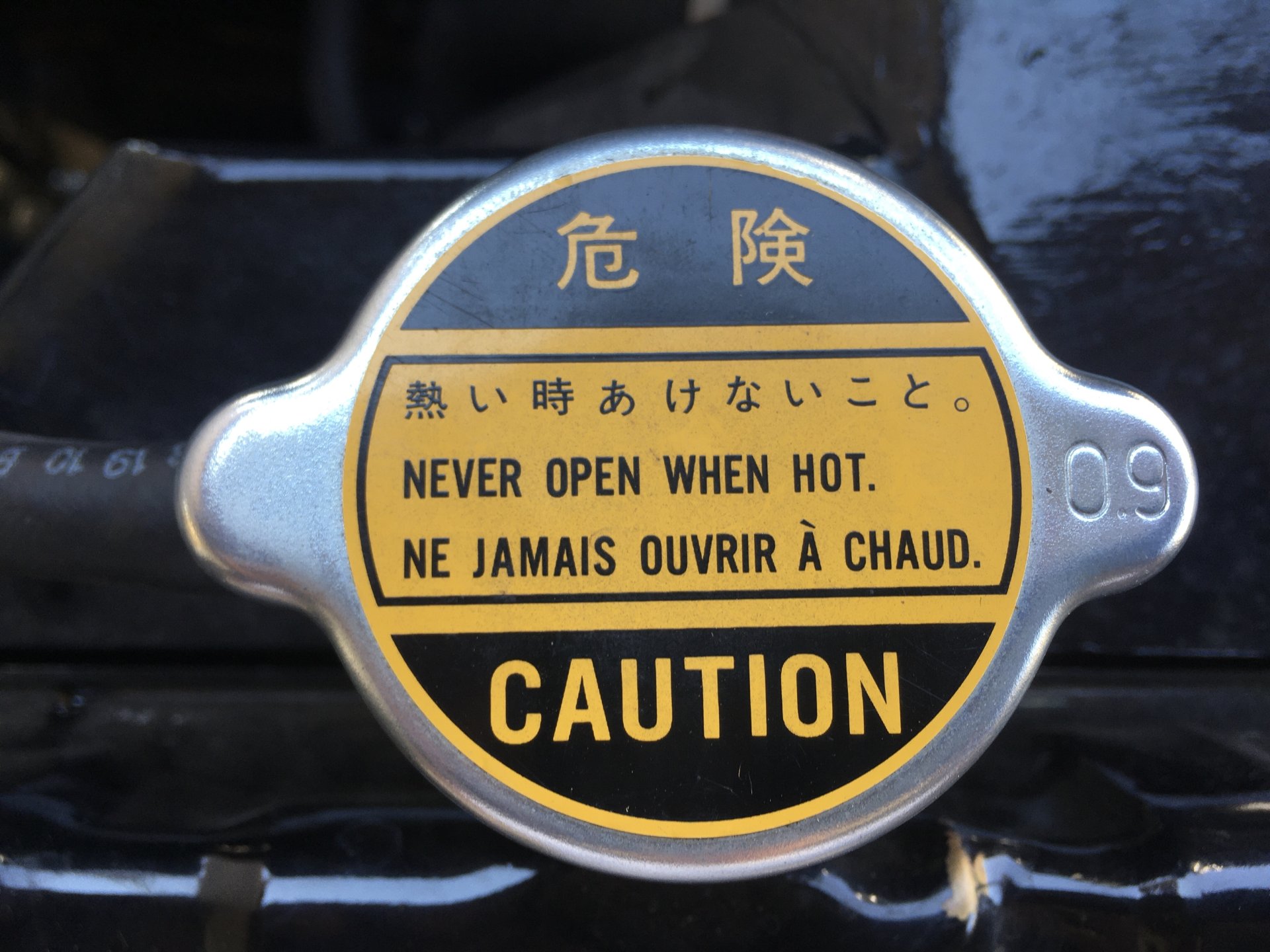 So hang on, got some serious tech coming

There‘s dirt. Being dummer than dirt isn’t good. I’ve been playing in the sand, er dirt, box a wee bit lately. We have chickens, so it could be worse. I know what comes out of chickens

Now the tech: at some point Toyota decided to change the mounting orientation of their radiator caps. A handful of years ago, I put in an OEM Toyota radiator in my ‘65 FJ40. The included cap, when fully turned to the stops looked like the one in the picture above. Nice tight seal, full functionality. Someone, probably an MBA grad, decided that full lock should be 90-deg more, or perpendicular to the way the one mounted in the pic above. (Note that that means the writing on the cap and the general orientation look wonky wrt the overflow tank tube and where the FRONT of the rig is.

) Yes, they included the stops for full closure, but for old people like me, in that dirt realm of stupidity, who function 98.63% of the time on repetition, it was reasonable to assume that this installed cap ought to look like the installed cap on a radiator just a few years it’s senior. And I’ve been driving it this way since the rigs been running and the first indication that I’m in the dirt category was the last trip out (and todays failed test). So, it’s getting reburped, and I’ll do another test just to make sure I’m a dirt bag. At least I got an unnecessary clean and flush. The rig, not me

Seems to be overheating from below before thermostat opens.

Wow, can’t believe how much I whined in those last posts

FBI finally released the search warrant, and evidence is not good. (Not that one

Oil was at/below the L on the dipstick, but after run and coolant dump a couple of days ago it looks like the overflow coolant added itself to the oil after cooldown vacuum. Hadn’t seen this before. 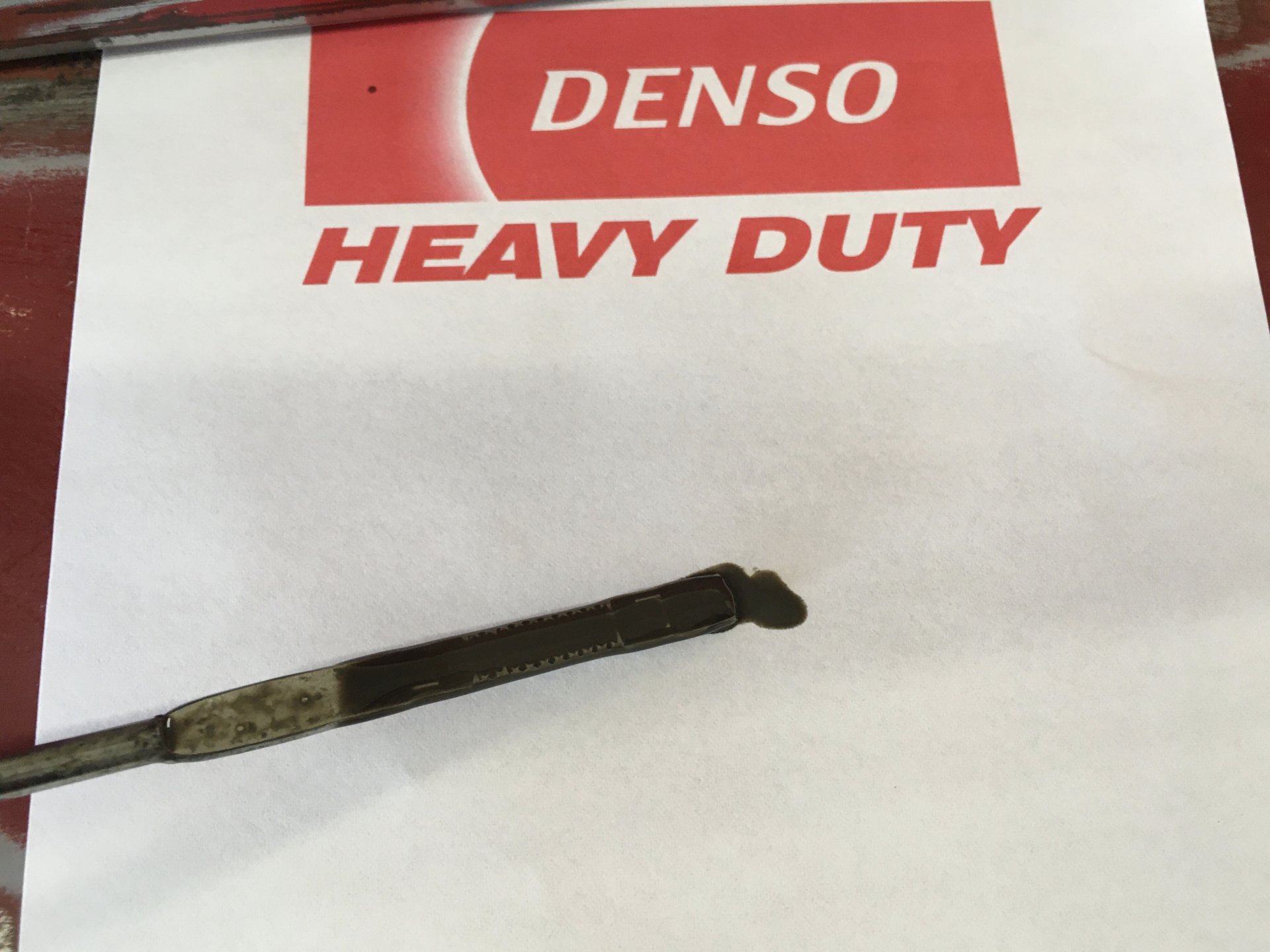 Some mildshake residue on the valve cover, I saw this the last time i pulled it (but there was no coolant in the oil then). 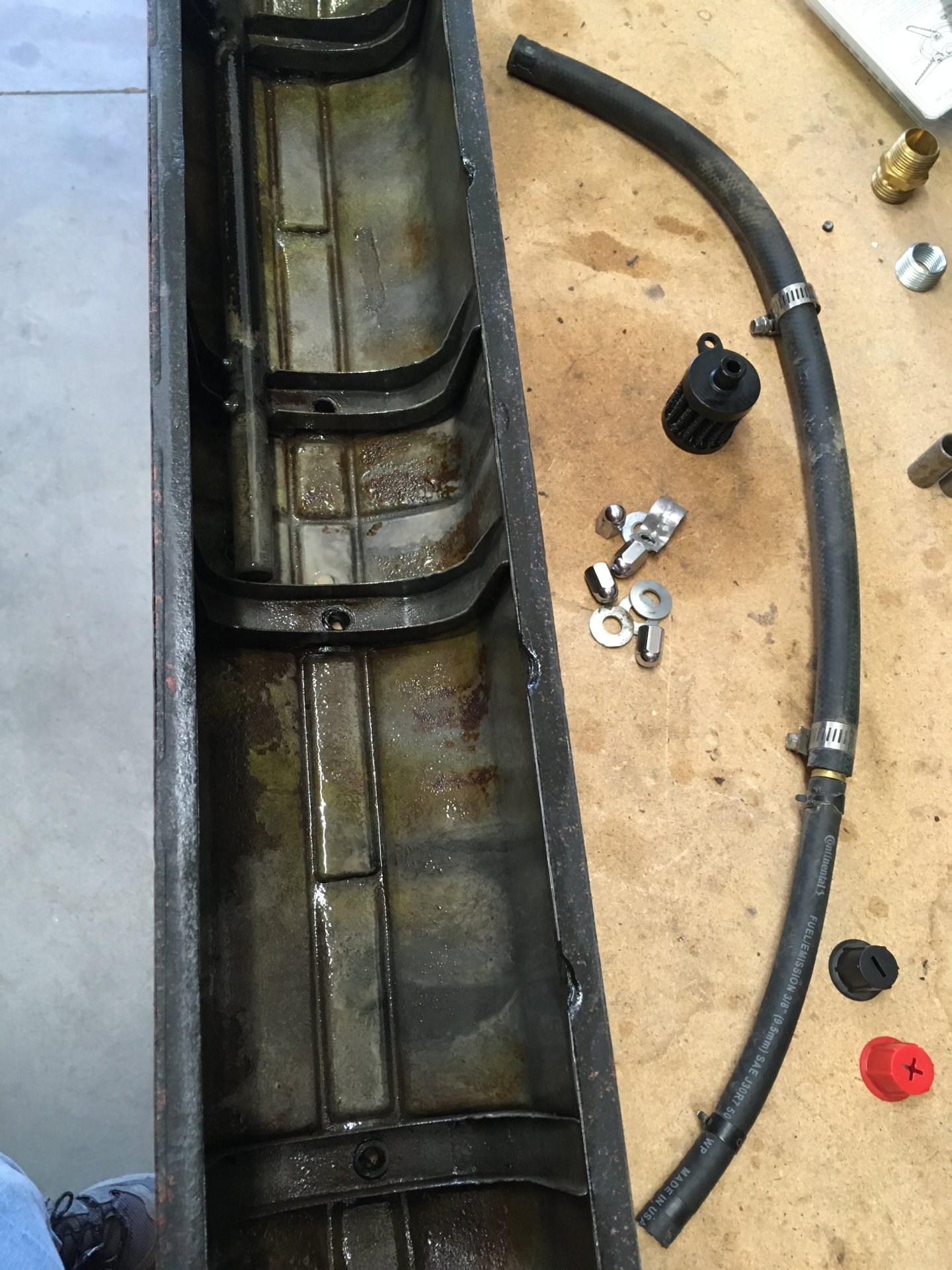 Rockers are all getting oil, a little bit of milkshake thickness to it in places. 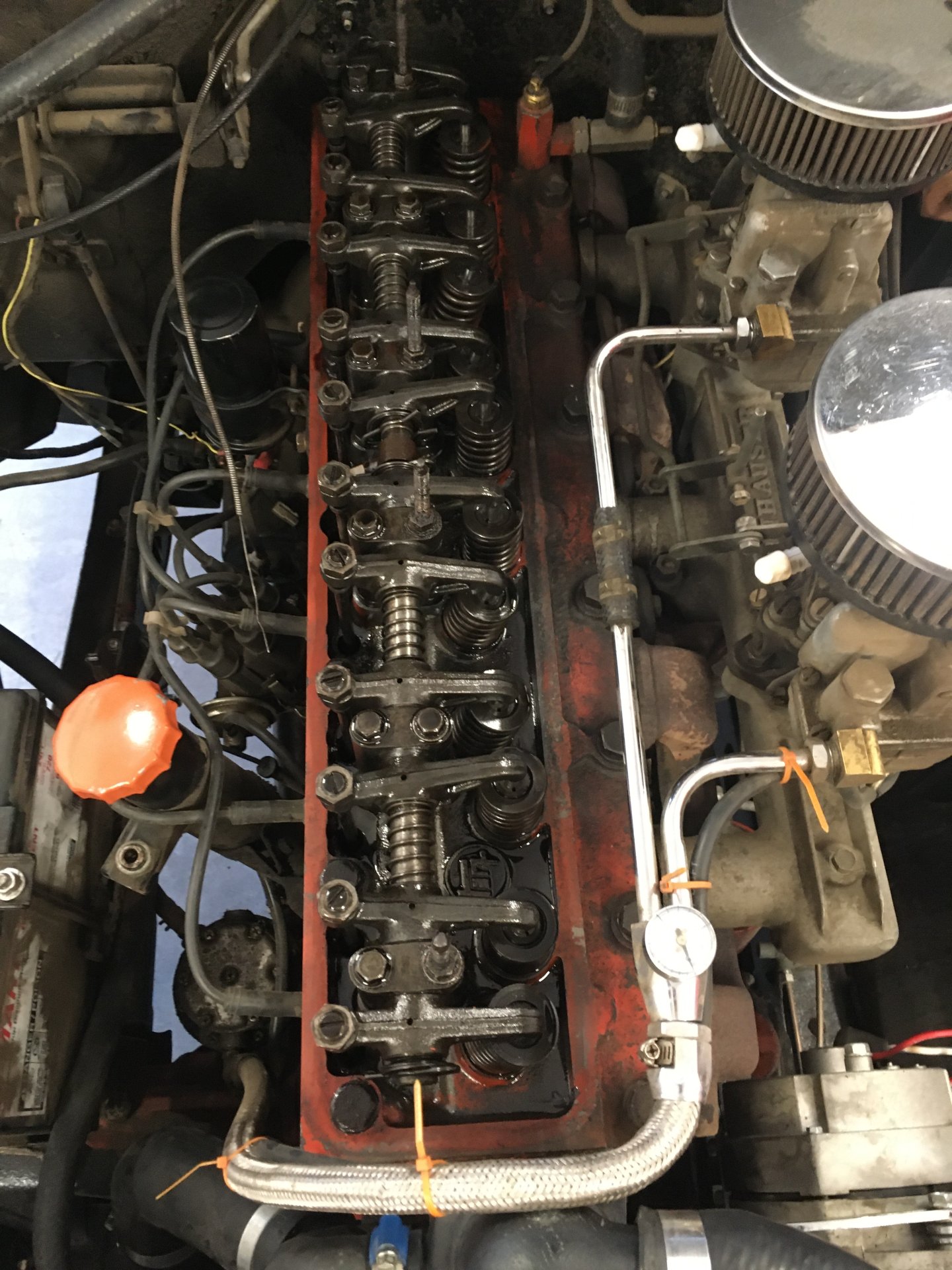 First thing out when the oil drain plug was pulled was coolant, then oil (no pics of that enjoyment). Oil filter was full to the brim with wonderful chocolate milkshake, Yumm! 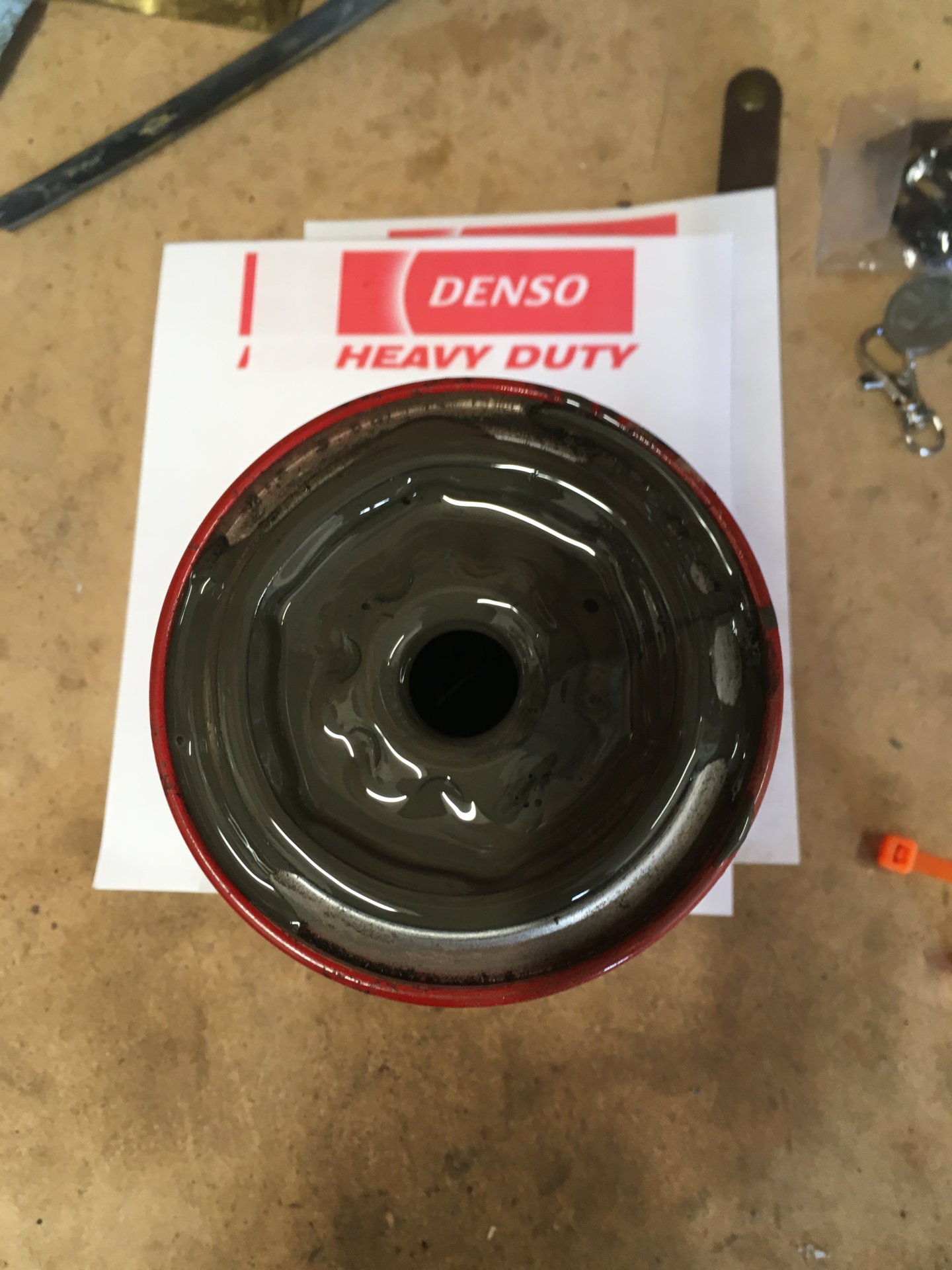 Don’t tell Al Gore about my carbon footprint. (I knew I was burning oil, now I know it was all cylinders 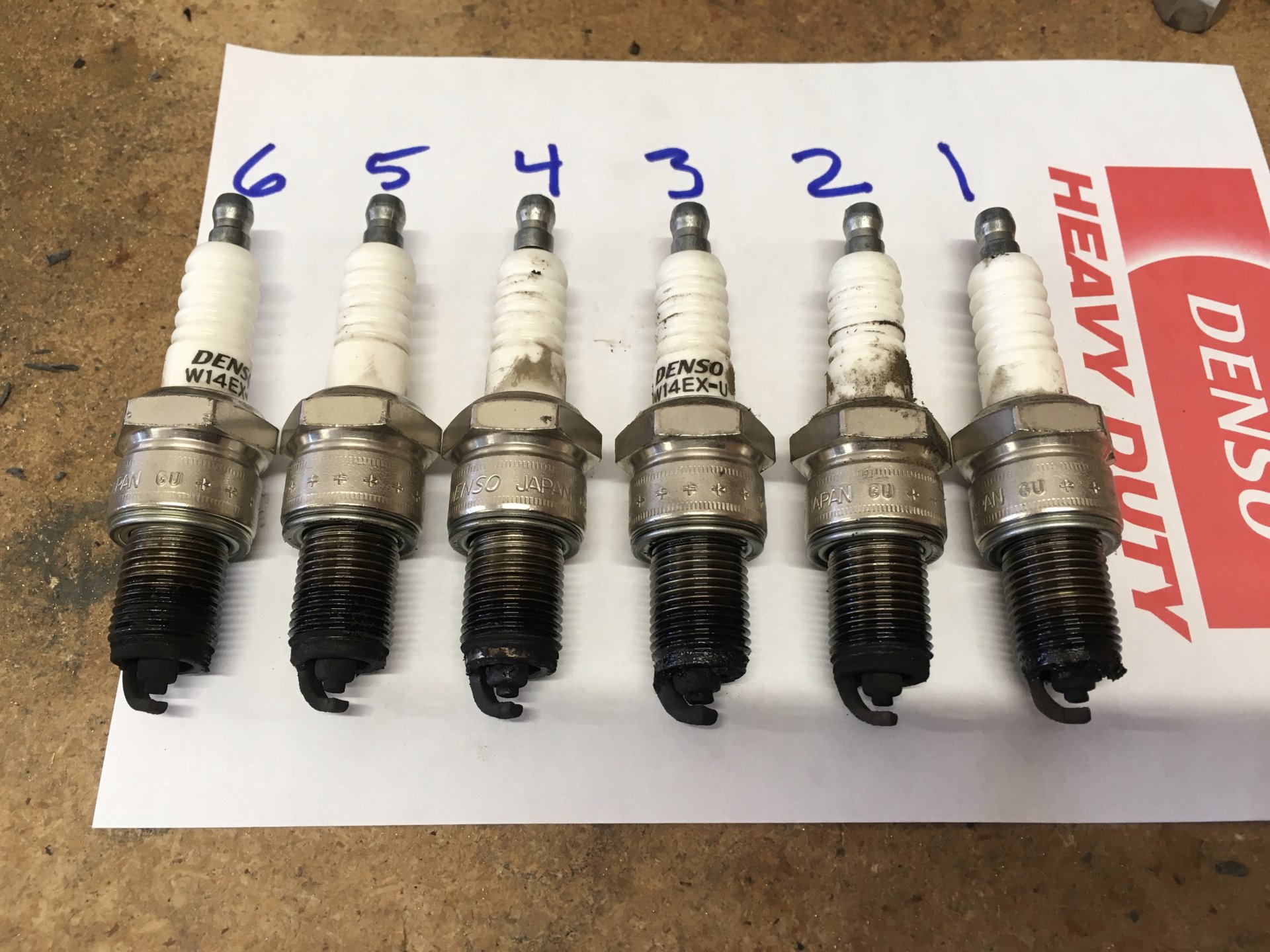 Well that sure sucks ! Hang in there !

Per Matt’s @ToyotaMatt advice (cross post in 40 tech) I pulled the dizzy, put some fresh oil in with a new sacrificial filter and pumped the pump with a drill to help flush residual milkshake. I added some ATF as well. Bumping the rig in gear I was able to get the oil feed holes for the rockers aligned so got oil flowing up and through the upper motor as well. And the drained flush had some haziness so good to clean out the gunk. Diehards would probably repeat but I don’t know where this is all going anyhow so I’m not in the diehard category.

As they say, life s¥cks/stinks/is a challenge, then… your dog eats a rock (again) and requires surgery (again) to have it removed

. He‘ll be all right, but I could do with a bit less of that sort of thing, including motor failures

Safe way to clean the block is plain white vinegar. You can even start and run it that way for a while. Watch where you drain it, while natural and fine for the soil you will leave near permanent marks on pavement.
You must log in or register to reply here.